On Tuesday of this past week (the 27th) I visited the Doria Pamphili Gallery with my Baroque Art class; I was proud of myself because I managed to get there and back to school without having to consult my map a single time. I’m becoming pretty good at navigating the metro/bus system here. And tomorrow (Sunday the 1st) I finally get to start using my new monthly pass, so I can take the bus as much as I want! The gallery was interesting because it’s a private collection only recently opened to the public–about 10 years ago–and is still organized and looks like a private villa with art covering the walls from mid-wall to the ceiling, frescoed ceilings, and a late-Baroque gallery based on the Hall of Mirrors at Versailles. To the Pamphili family belonged Pope Innocent X, of which there are several busts by Bernini and a portrait by Velazquez.

Thursday my Late Antique/Early Byzantine class went to see the imperial buildings of the late Antique emperors Diocletian, Maxentius, and Constantine. We walked around the area that was originally the Baths of Diocletian, now only partially preserved as the Piazza Repubblica, several churches, and the Baths museum; walked all the way downtown to the Forum to see several monuments erected by Diocletian, and the Curia building that he restored; and then walked over to see the Basilica of Maxentius (commonly referred to as the Basilica of Constantine because he completed it) and the famous Arch of Constantine. Professor Gadeyne requires a lot of walking, and I could only barely keep up because of my ankle, but he told us in his characteristic way that he was “almost a little bit proud” of us for covering all the sites without complaining. And when he noticed me limping he even slowed down a bit, but said I should get better or he’d have to chop my ankle off. I finally got an Ace-type bandage for it, so I should be ok now. 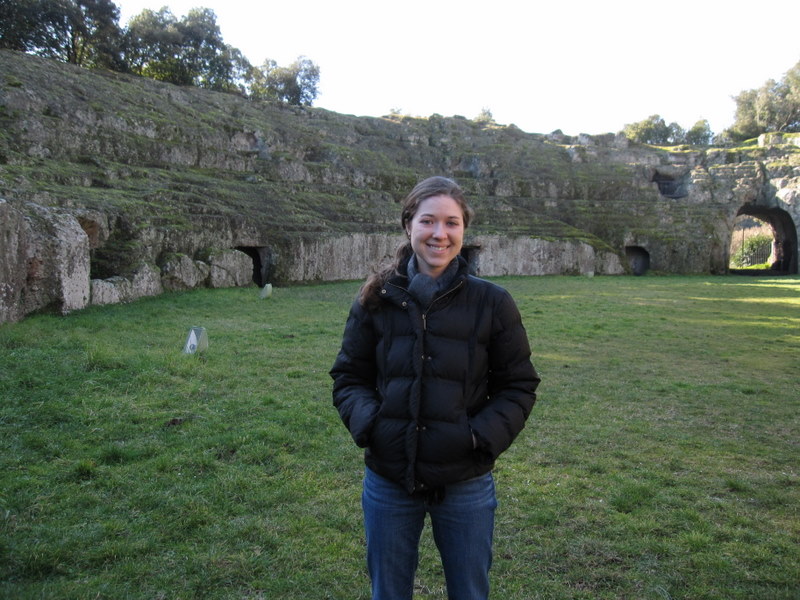 Yesterday, Friday, Sara and I went on a day-trip organized by the school to see some sites along the Via Cassia. We visited a pretty well-preserved Roman amphitheater (see above) near the town of Sutri; the amphitheater was carved out of a large outcropping of tufa, volcanic rock, making it actually a sculpture rather than a building. In the town square they were filming scenes for the musical “Nine,” which, oddly enough, we had seen them filming in the Piazza del Popolo during the wall walk tour! We will have to go see this movie when it comes out. After Sutri we went to the town of Caprarola, once controlled by the Farnese family of Pope Paul III. There we saw the Palazzo Farnese (not to be confused with the one in Rome that’s now the French Embassy) with lots of interesting frescoes. After lunch we went further to the town of Viterbo, originally a medieval town where the popes would escape to during unrest in Rome. 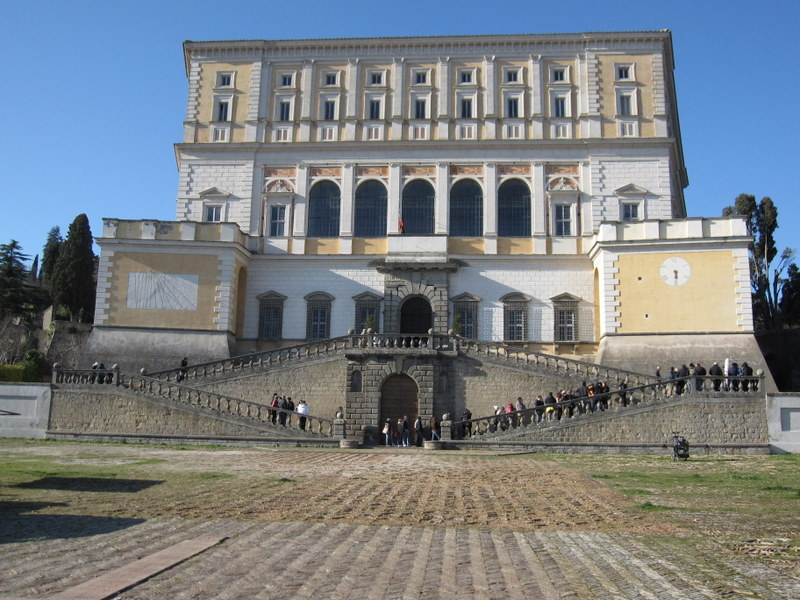 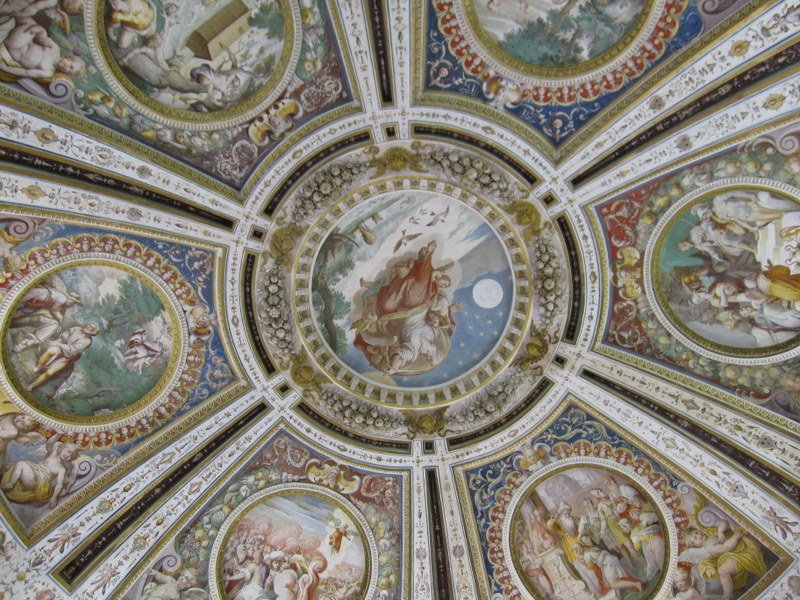 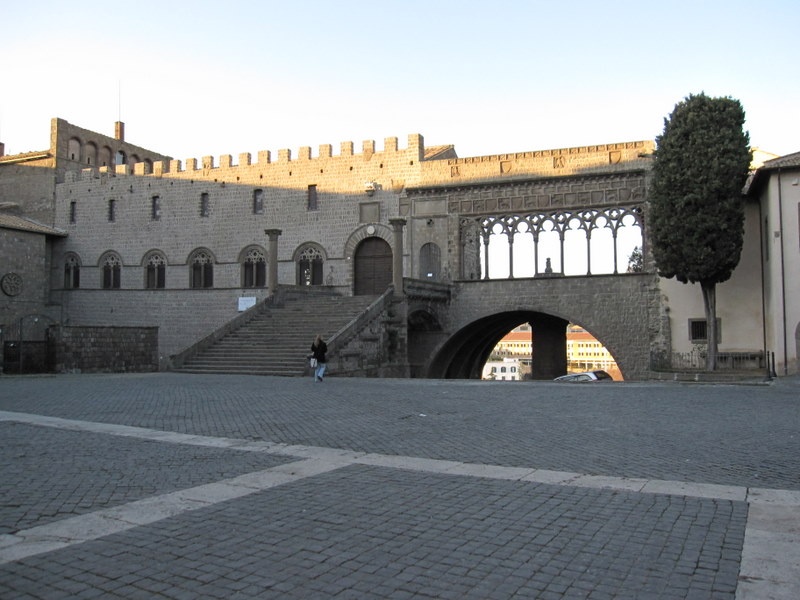 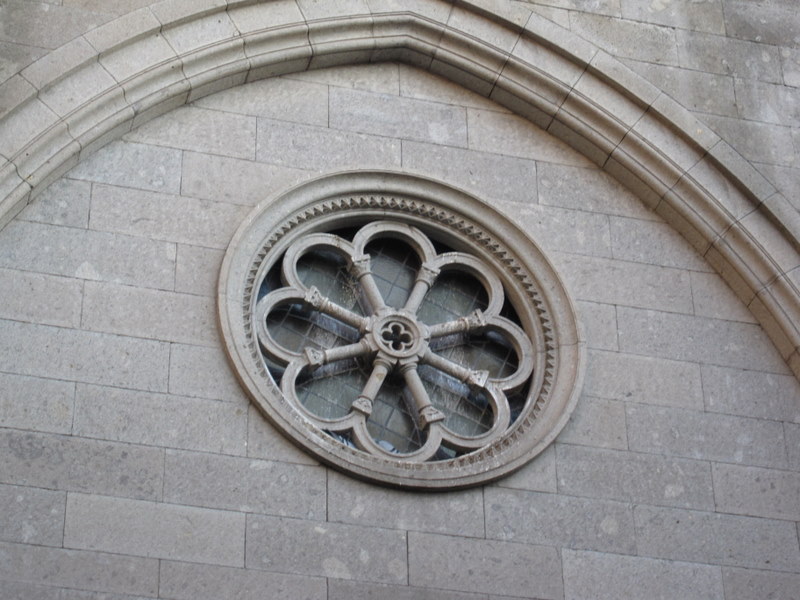 Finally, on Friday night we and two friends went out to dinner, the first time we’ve been out instead of cooking for ourselves! It was tasty but the bill reminded us why we’re cooking in the first place–it’s much cheaper to cook!

Food and culture notes: The best dessert to get in Rome is crostate, a kind of jam tart that’s like a pie but with a crust that’s closer to a cookie and much more delicious. You can get them in the vending machines at school and of course in bakeries, but they’re good even from the vending machine! You can also get good hot chocolate and cappuchino from the vending machines. One of the most expensive food items here is peanut butter, which has to be imported from the US. We finally indulged ourselves and bought a jar today. Of course, Nutella is everywhere, and that’s a good substitute for me, but a lot of the other students here miss peanut butter. I personally miss barbeque sauce a lot, as well as salsa and fried chicken. Today we’re planning to make lasagne, which is harder to make here than one would expect; the grocery store doesn’t sell lasagne noodles dried, apparently, and it’s hard to get large enough quantities of ricotta and mozzarella to make it since everything is sold in such small amounts. We’ll find out if it’s just too hard to make! We also had to buy an appropriate pan because our kitchen didn’t have one.

One thing I do really like here is the number of different juices available: pear juice seems to be really popular, as well as blood orange and apricot. We get a couple different kinds whenever we go to the store. Eventually I’ll post pictures of the different kinds of ingredients we have here to cook with! Today I finally got a wooden spoon, which is apparently mandatory for cooking sauces and noodles; I’ll find out soon if it’s really that much better than the metal spoons I’ve been using so far. I also like the hot chocolate here from the bars, since it’s much thicker than the kind served at home, and the cornetti, Italian croissants, filled with cream are just delicious.

Coming up: We’re hoping to go to Tunisia for spring break! One of the professors at school is organizing it, and it sounds really amazing. More on that to come. Also, we made a reservation to go to Milan in March, where we’re going to a Verdi opera at La Scala, thanks to Sara’s perseverance in ordering tickets. We’re also hoping to go to Venice and Sicily on overnight weekend trips, and Pisa, Tivoli, and Florence on day trips by train, all TBD. Tonight, lasagne, and tomorrow we’re going to the Vatican to walk around. Beate noi (lucky us)!