To begin, here are two pictures from this past week: on Tuesday the 17th we went to St Andrea della Valle to look at the dome and apse frescoes by Lanfranco and Domenichino. They are pretty impressive; here are two not-very-good photos. 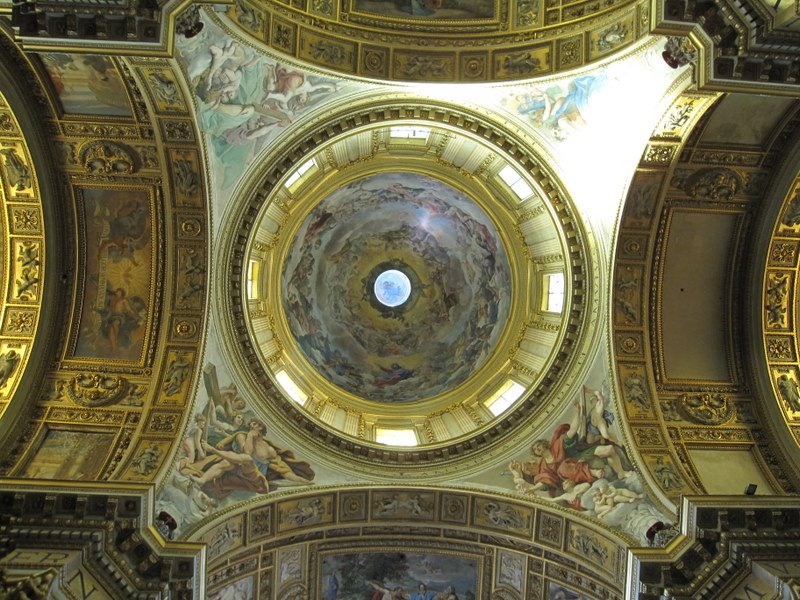 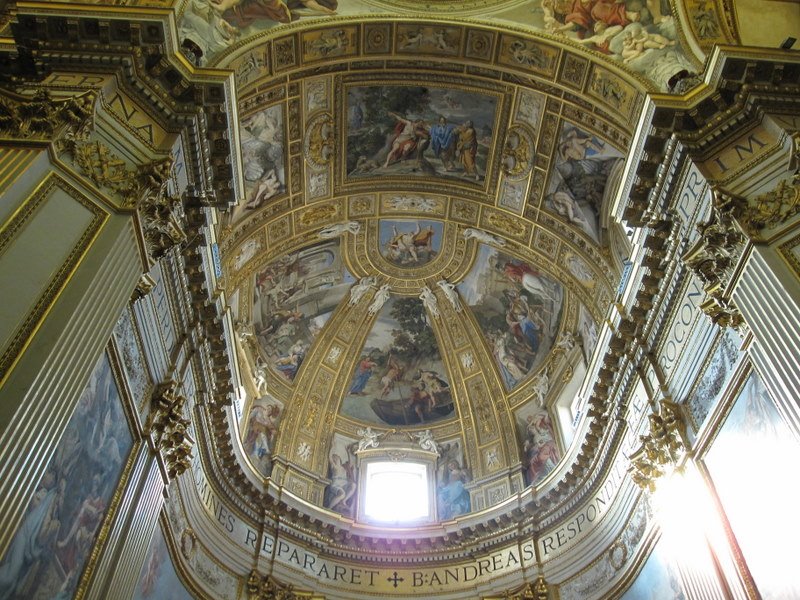 Then on Friday morning I left for Naples (Napoli) with my Baroque Art class! Here’s what we saw:

We left Rome at 7am and arrived around 10:30 at the Capodimonte Museum up above the city. This is an extremely large museum so we only saw a small part of it; unfortunately, I have no photos since we weren’t allowed to take pictures. We saw works by the Carracci brothers, Caravaggio, Artemisia Gentileschi, and other northern and southern Baroque painters.

Then in the afternoon the bus took us into the city where we took a funicular and a series of public escalators up to see the Monastery of San Martino, a Carthusian monastery, situated on a hill above the city. The views from there were amazing, and the monastery’s chapel was decorated in the Neapolitan Baroque style with lots of floral marble revetment and outrageously ornamental sculptural decoration. Here you can see the escalators and Mt Vesuvius. We happened to be in Naples during the coldest week of the year, the one week when Vesuvius has snow on top! 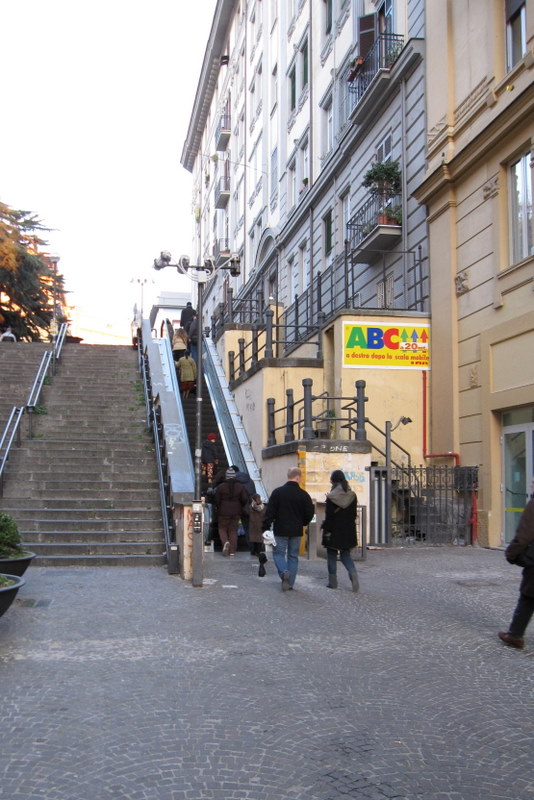 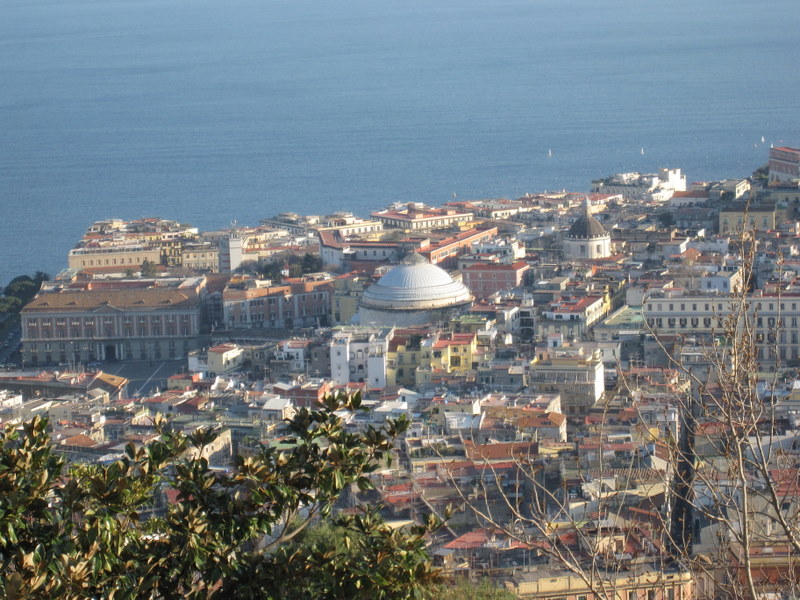 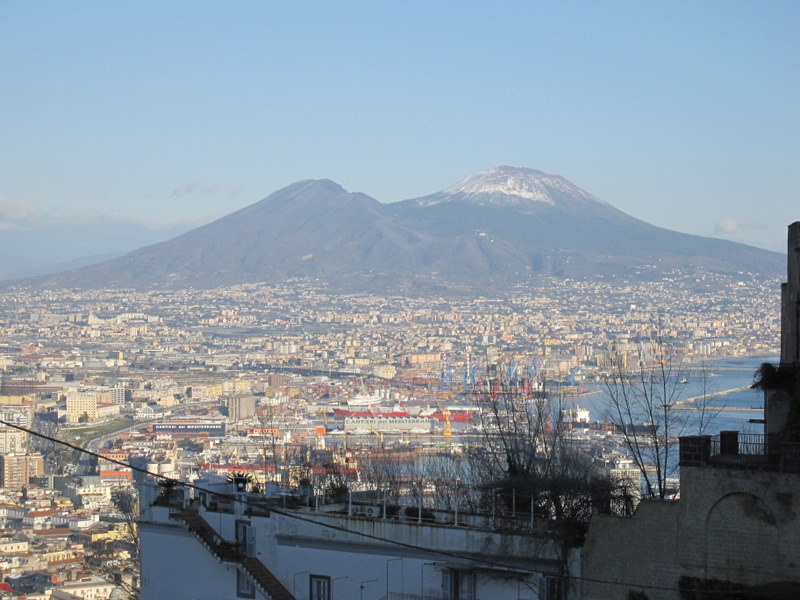 On Saturday we spent the entire day walking around the city, mostly in the downtown historic district. We saw several churches, including the Duomo (Cathedral) dedicated to San Gennaro, the patron saint of the city. The chapel of the Treasury in the cathedral is amazing, full of solid-silver reliquaries and paintings. Other churches we visited included San Gregorio Armeno, San Lorenzo Maggiore (a French Gothic church), the Cappella San Severo with a famous statue of the Veiled Christ, and the convent of Santa Chiara, with a cloister tiled in majolica, hand-painted ceramics. We ended the day in the Royal Center, in the square in front of the Royal Palace and Opera House. Naples has had a series of foreign rulers, including the French and Spanish, which explains the presence of French Gothic churches and Spanish-influenced art. 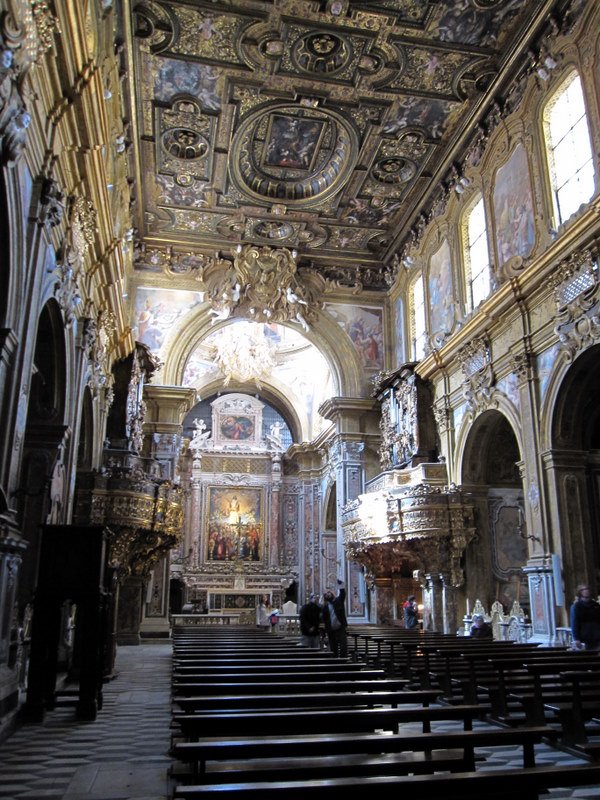 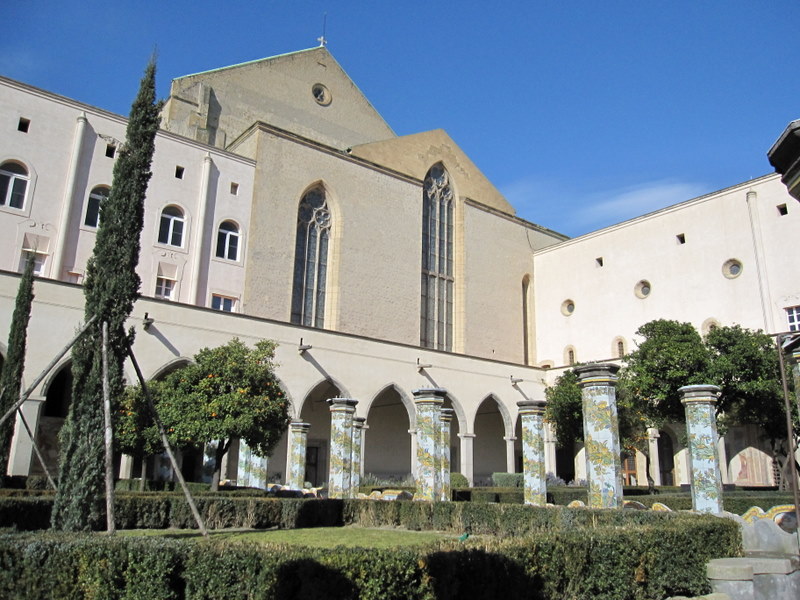 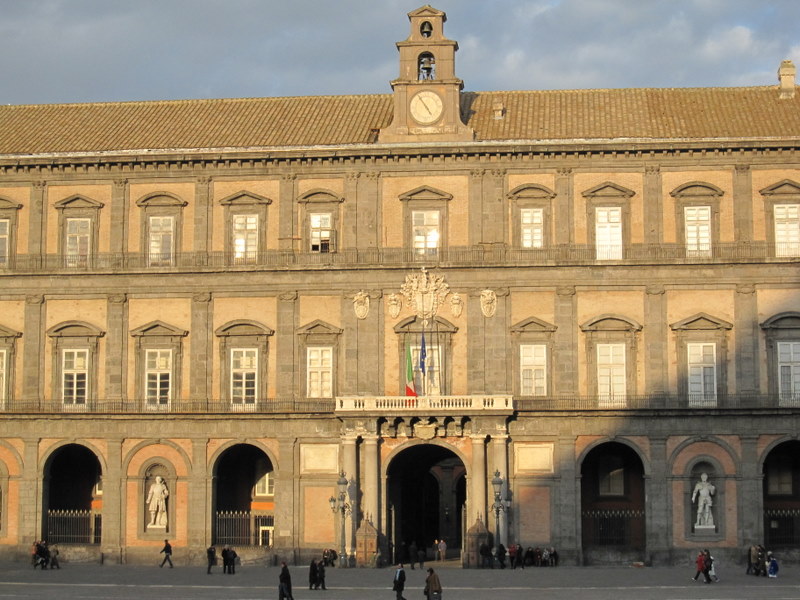 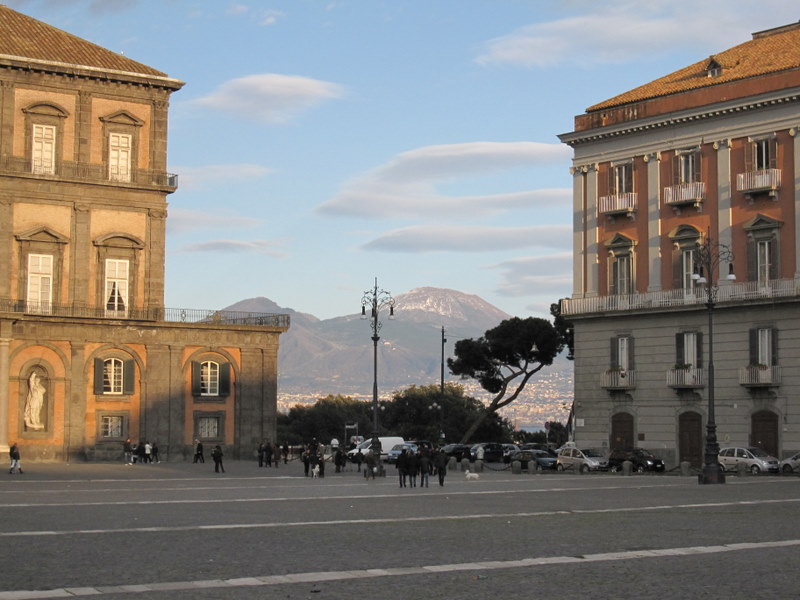 Above: Royal Palace; view from the square of Vesuvius across the bay

Cultural notes: Naples is pretty different from Rome and Northern Italy because of its Spanish/French background. They have their own types of pastries, sfogliatelle and baba', and their pizzas are round instead of square with softer crusts. Roman pizza is rectangular and has a crunchy crust. Personally I like Roman pizza better, but Neapolitan pizza is closer to American pizza. Another big deal in Naples is the creche scene; there is a whole street of artisans who make the figures for creches. We visited this street and looked at all the little figures. Neapolitans are also notoriously superstitious, and all around the city you could buy little ceramic charms that looked like red chili peppers but were supposed to be “horns,” to protect against the evil eye. However, you can’t buy these for yourself-you must give them to someone else, and the only way to get one is to be given one. 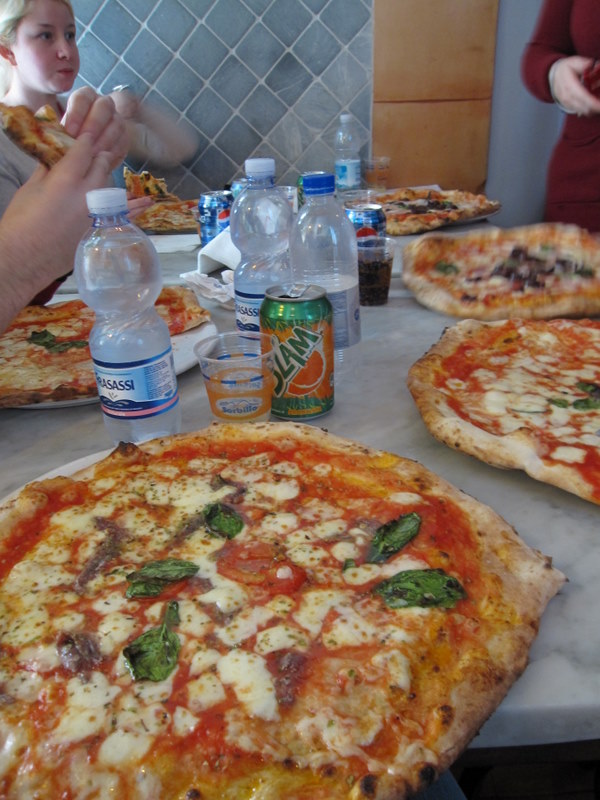 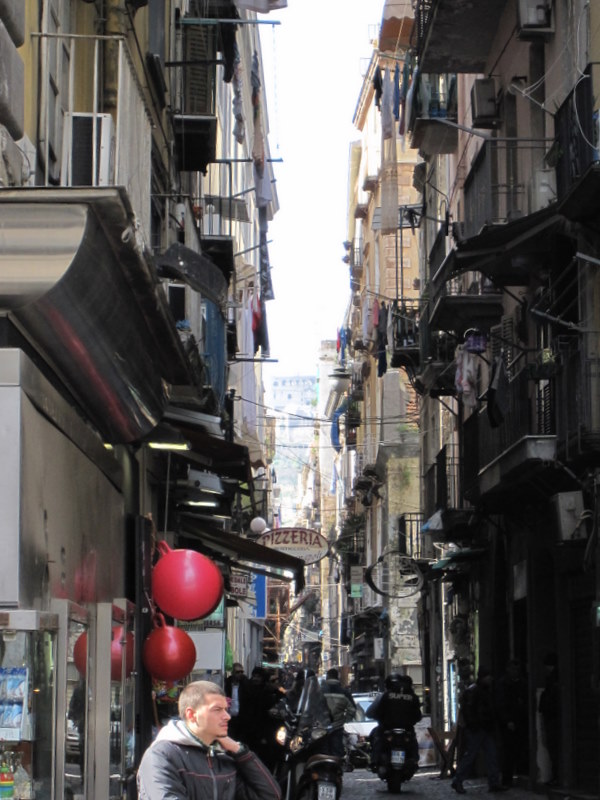 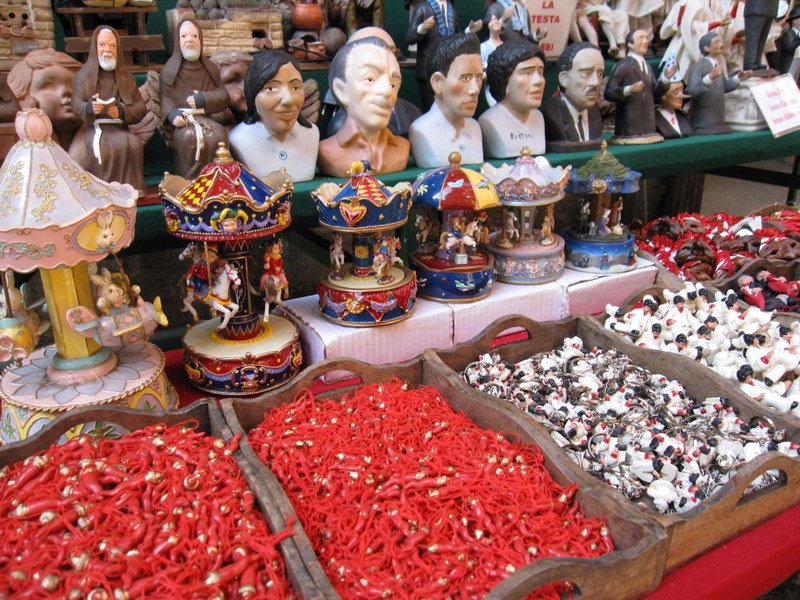 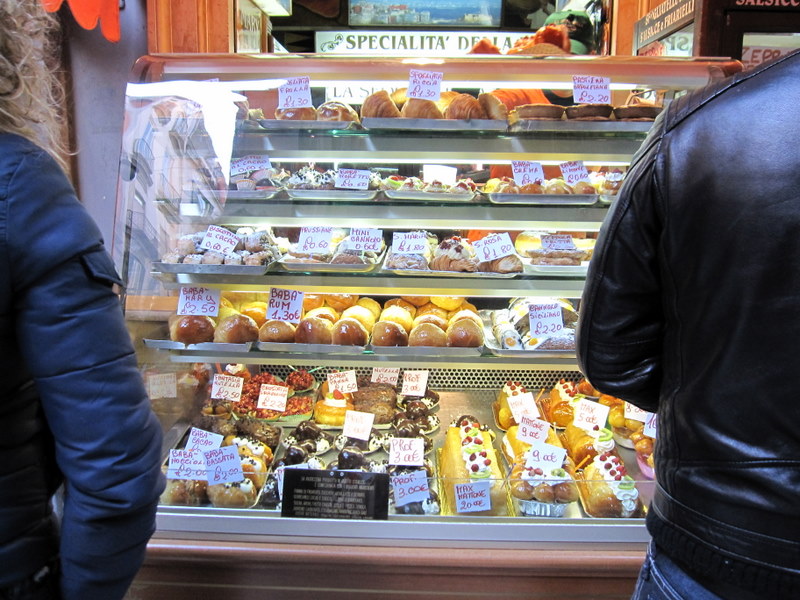 Naples was much nicer and safer than I had been led to believe; we walked down the Spaccanapoli, supposedly a street known for theft and poverty, but it was actually pretty quaint. The shopkeepers weren’t aggressive at all, although we’d been led to believe otherwise. Maybe since it’s the off-season (neither Christmas nor the summertime) it’s not as bad as other times. At any rate, Naples isn’t such a bad place to visit after all!