After a short week back at school after spring break, we left on Thursday the 12th for Sicily! This was our most difficult trip, requiring four days of travel and a combination of buses and trains through four cities in Sicily. We took an overnight train on Thursday night which took us from Rome to Palermo, the capital of the autonomous region/island of Sicily. Palermo and Siracusa, another major city, traded off as capitals of the island in the past; Palermo, however, has royal buildings left from the Norman rule of the city that Siracusa does not. 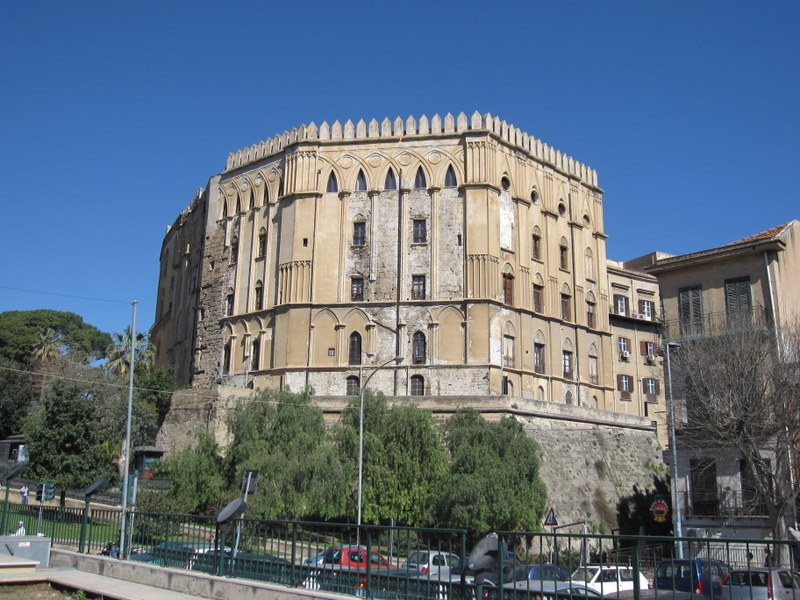 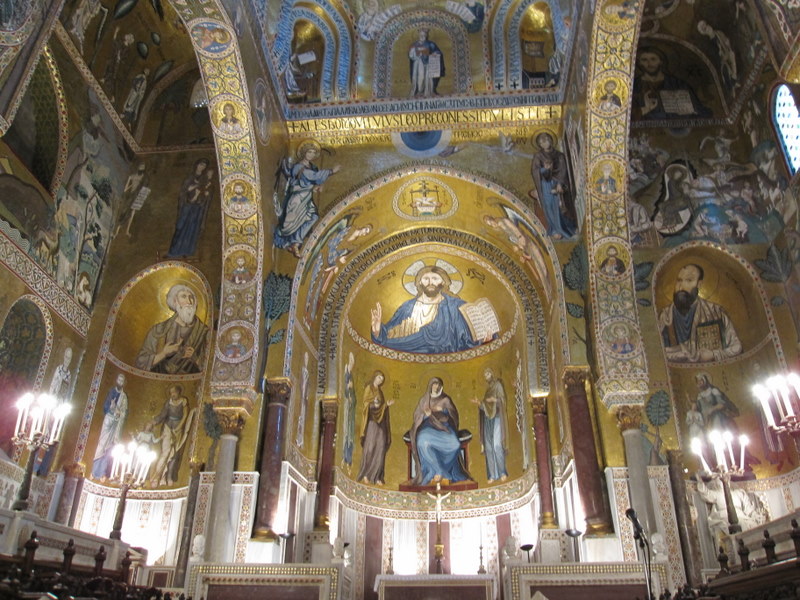 The Palazzo Normanni, the Norman Palace, and at right, the interior of the famous Cappella Palatina, Palatine Chapel, covered in medieval mosaic. We got to take a tour of the palace, which today is used as a government building by the governing bodies of Sicily. 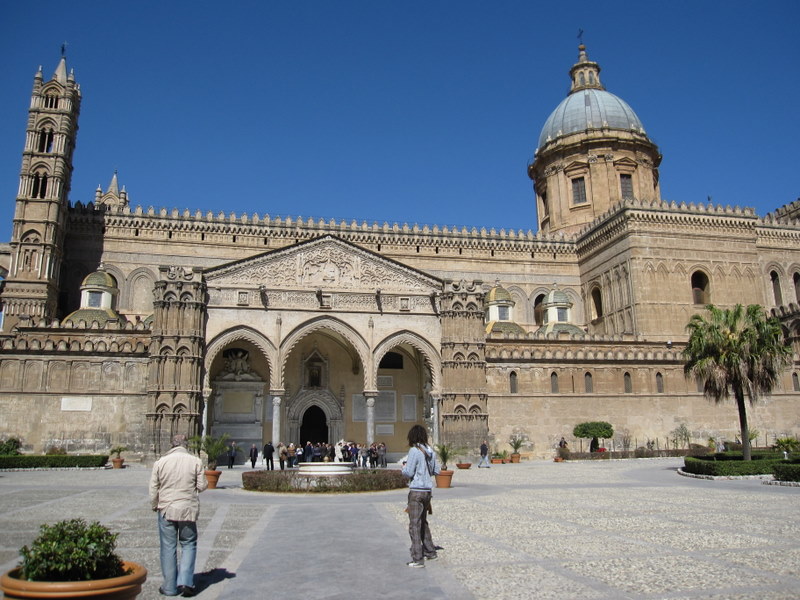 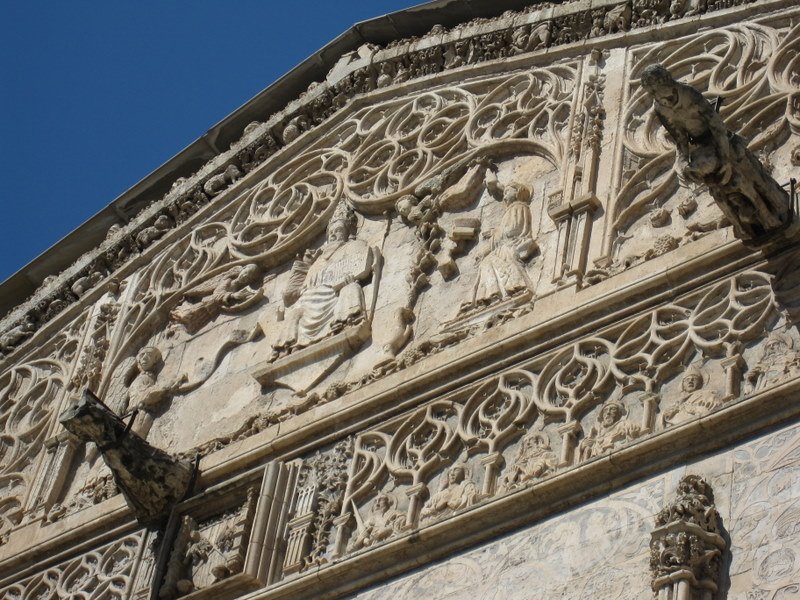 The Cathedral (Duomo) of Palermo and a detail of the carving 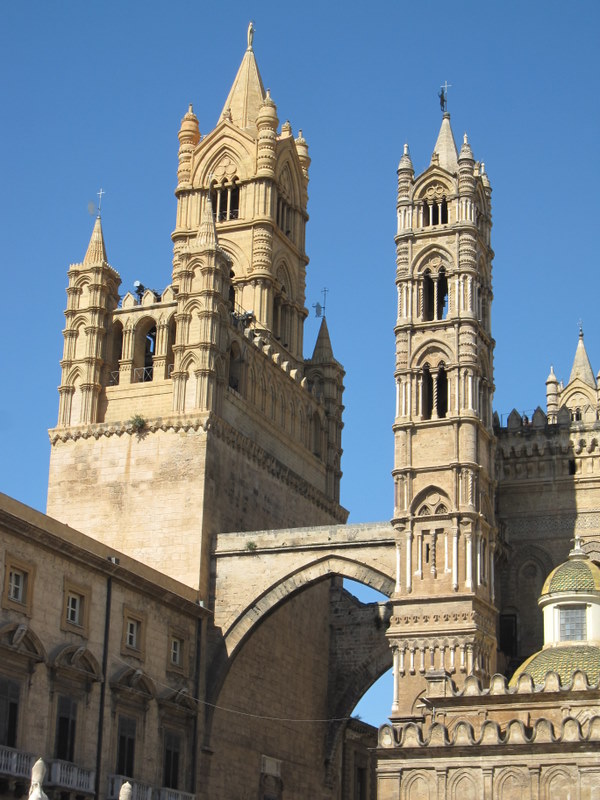 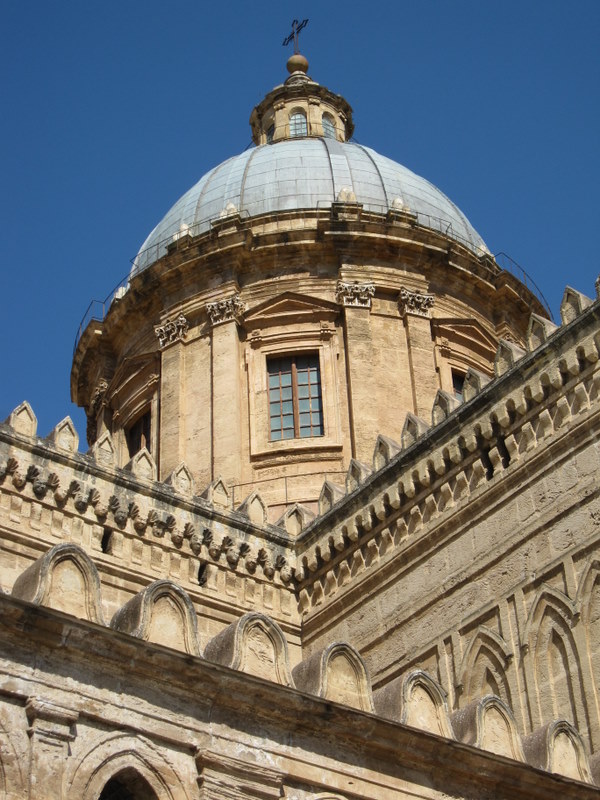 More details of the duomo, dome and bell towers 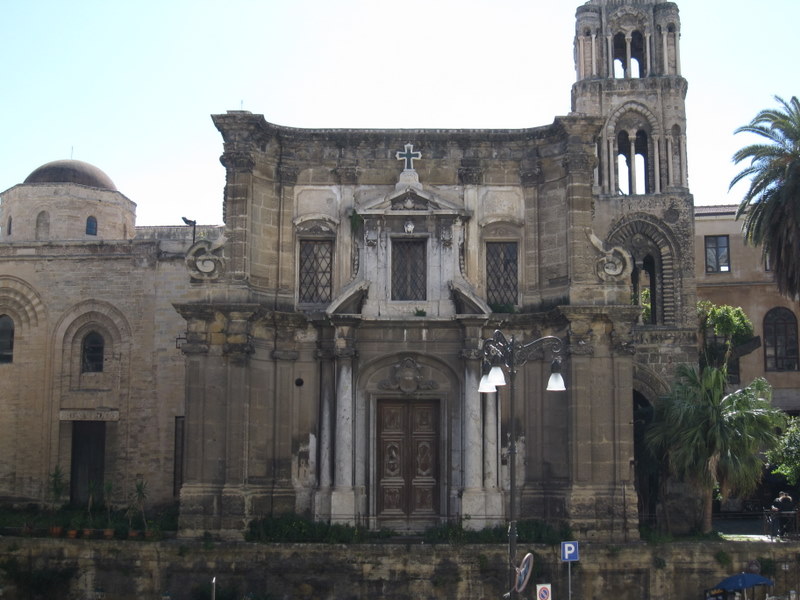 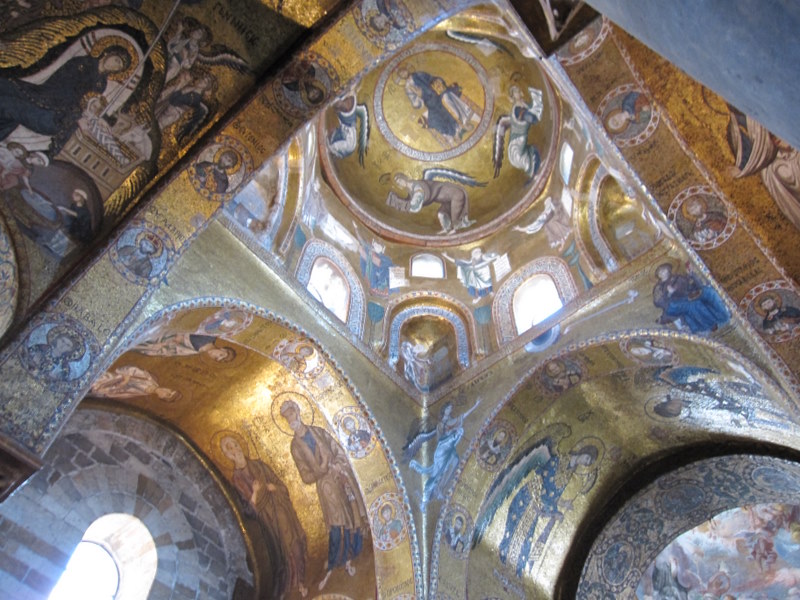 La Martorana, a church in Palermo with more medieval and Byzantine mosaics 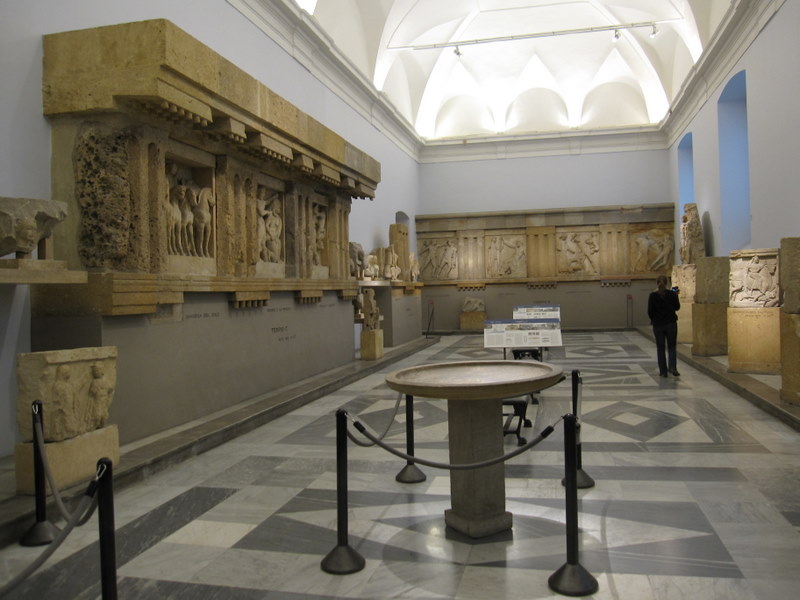 The National Archaeological Museum in Palermo has architectural fragments, like these above, from all the major temples in Sicily; they were brought here for preservation. You can see the monumental size of these reliefs and entablatures by the size of the person standing next to them.

After spending Friday night in Palermo we took a train on Saturday to the resort town of Agrigento, on the opposite, southern coast of the island. Agrigento is reknowned for its “Valley of the Temples,” which is actually a high ridge on which are located three nearly-intact Greco-Roman temples and two ruined ones. Sicily was originally settled by the Greeks and was a Greek colony before it was conquered by the Romans, Arabs, Normans, Spanish, and finally Italians. 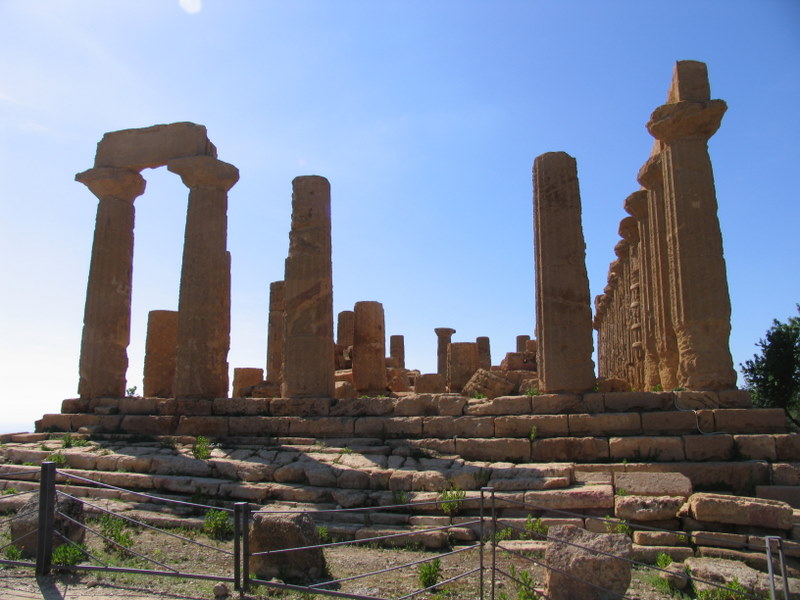 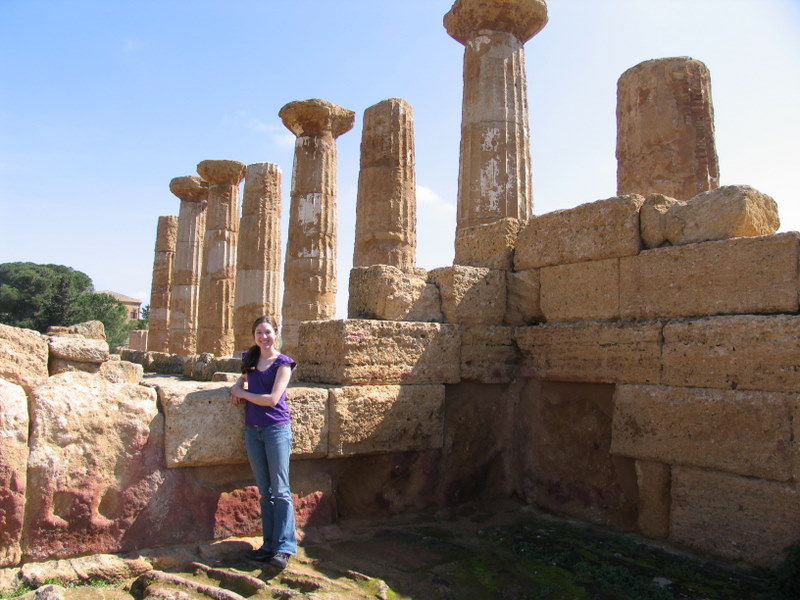 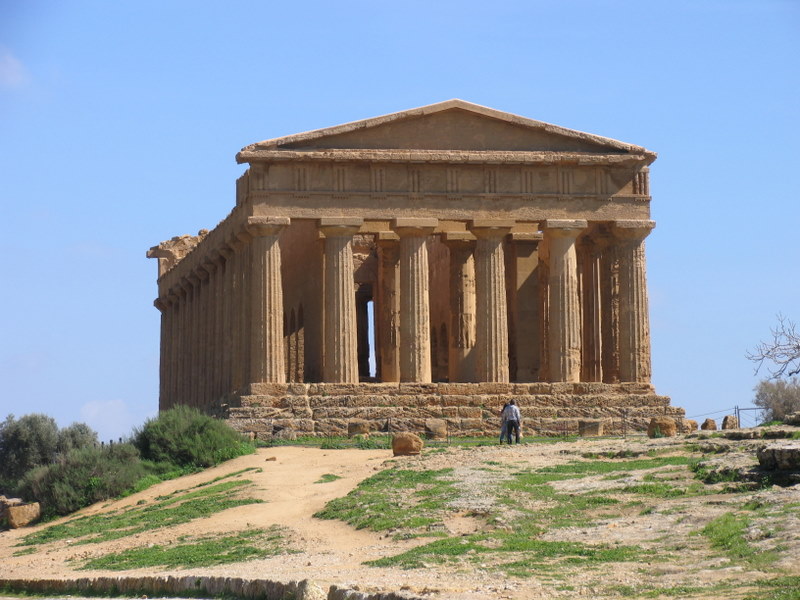 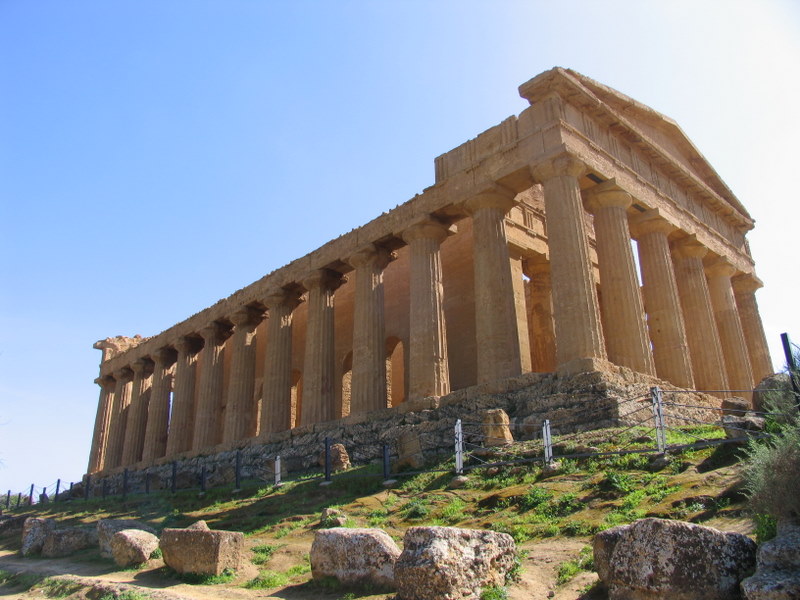 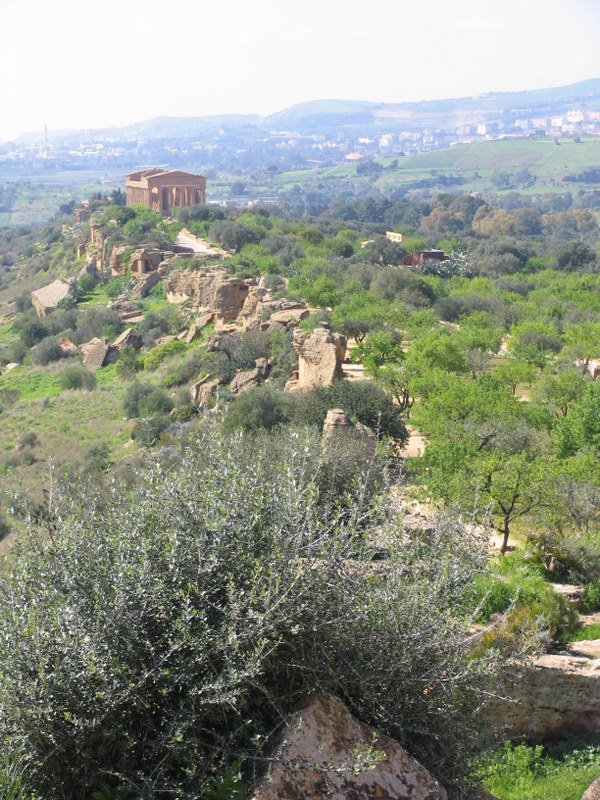 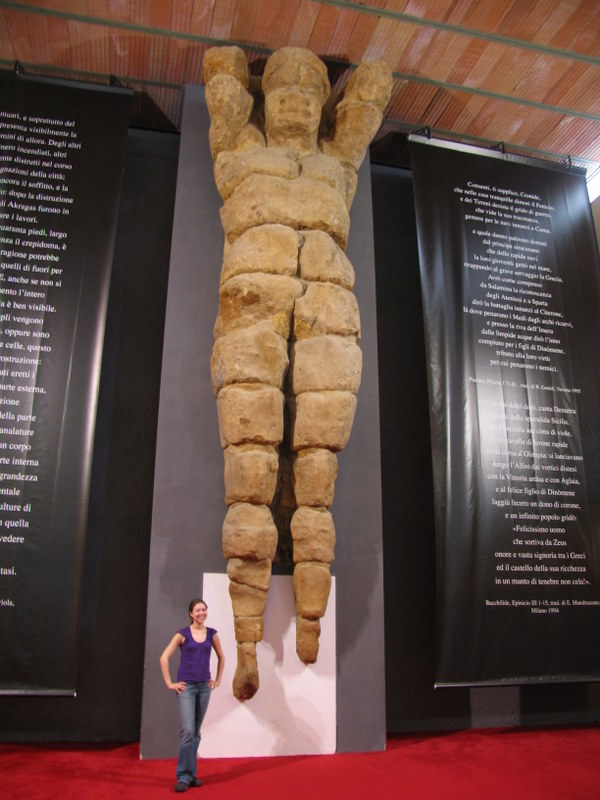 View back toward Temple of Hercules; at right, a giant Atlas figure that came from the Temple to Jupiter, below 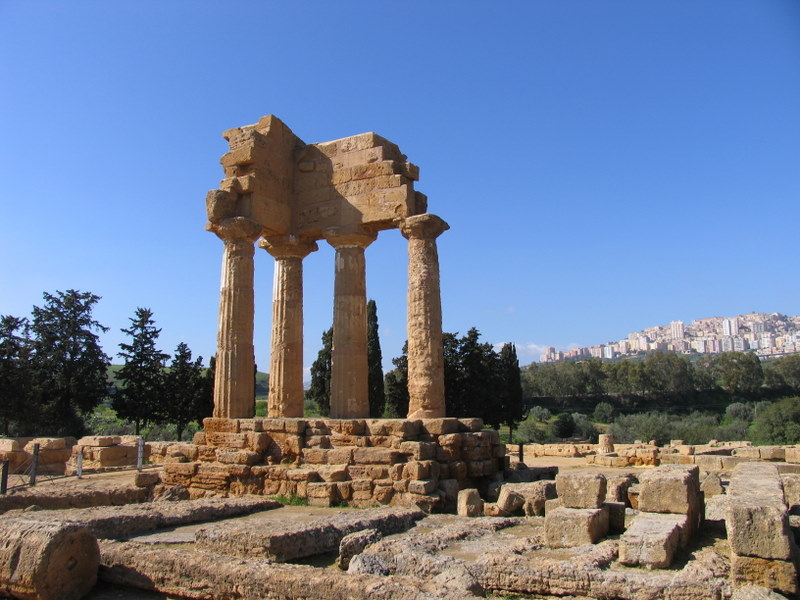 Left: Temple of the Dioscuri; Right: ruins from the Temple of Jupiter, including a massive column capital.

After spending most of the day in Agrigento we took an evening bus to Catania on the east coast of the island; Catania is known as a university city thanks to the very large University of Catania located there. It’s below Mt. Etna and thus has been destroyed by the volcano many times in its history. Catania was my least favorite city as it was the dirtiest and least historically interesting, but we only spent the night there and a few hours the next morning before catching a bus to Siracusa. 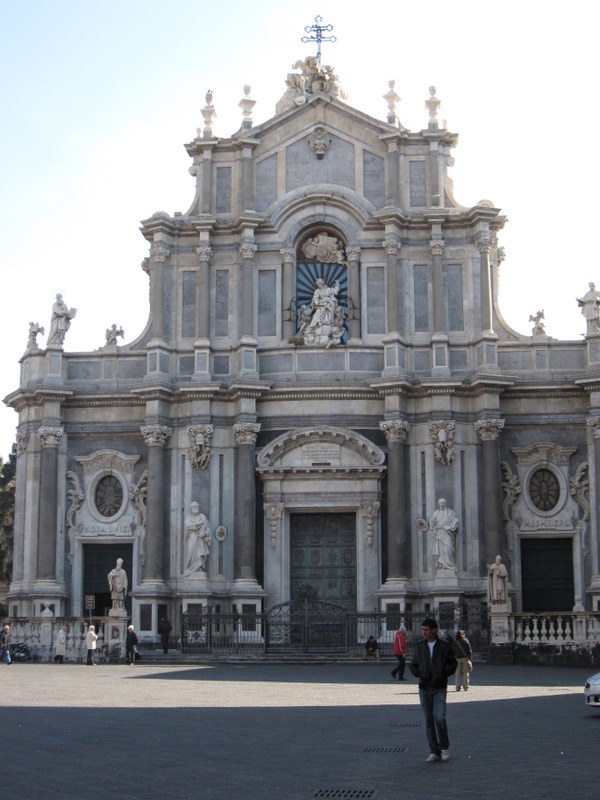 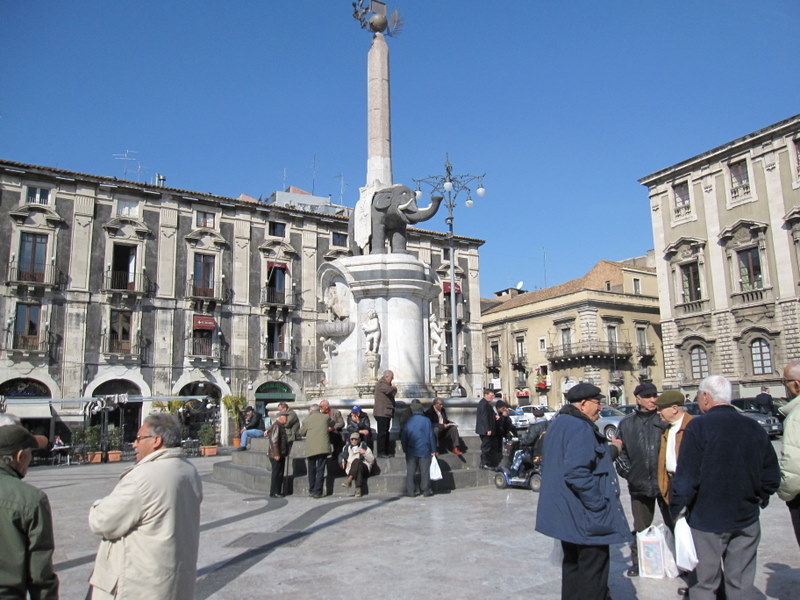 Duomo of Catania and Piazza degli Elefanti, notice the elephant statue that’s supporting the obelisk. The elephant is the symbol of the city. Most of the city’s buildings are made of the grey volcanic stone seen in the buildings above. 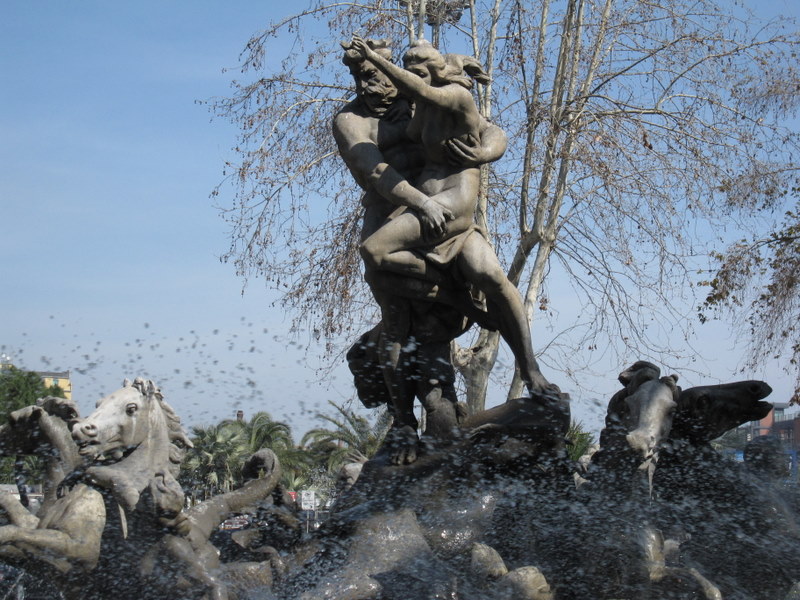 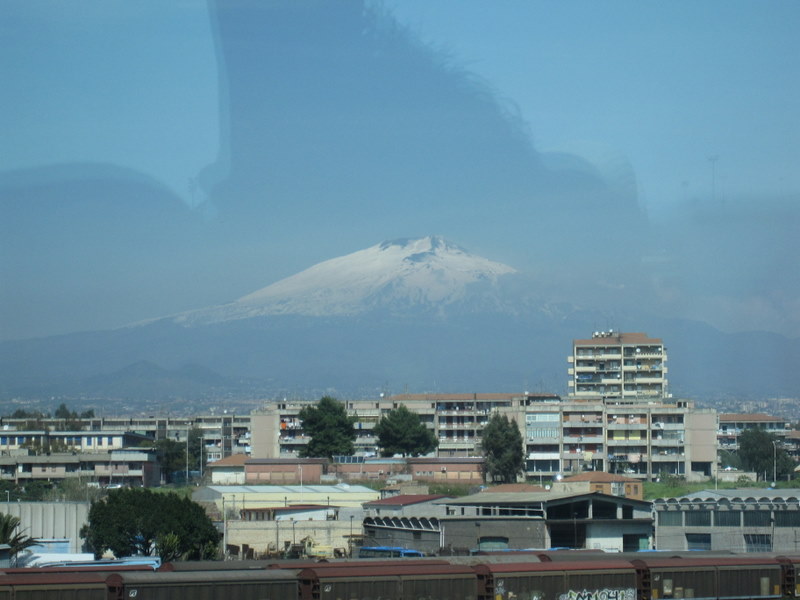 A Baroque fountain (most of Catania is Baroque architecture today since its last destruction was in the 1600s, right before the Baroque period) and Mt. Etna in the background from the bus window.

In Siracusa we weren’t able to figure out how to leave our luggage at the station (the station employees were most unhelpful) so we had to tow our luggage with us the entire time we were there! This prevented us from seeing the museums and some of the sights, but the area we did see was beautiful. We spent the whole time on the Ortygia Island, the oldest part of the city where there were few cars and several interesting piazzas. 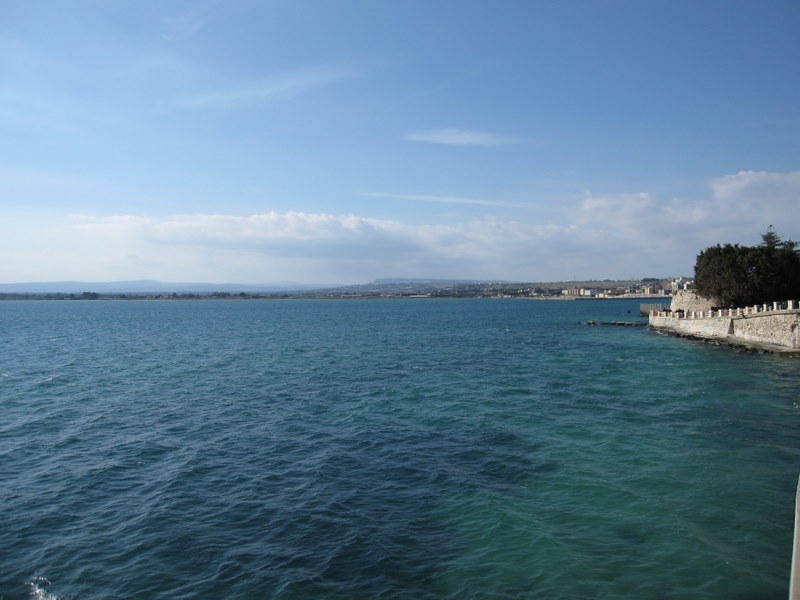 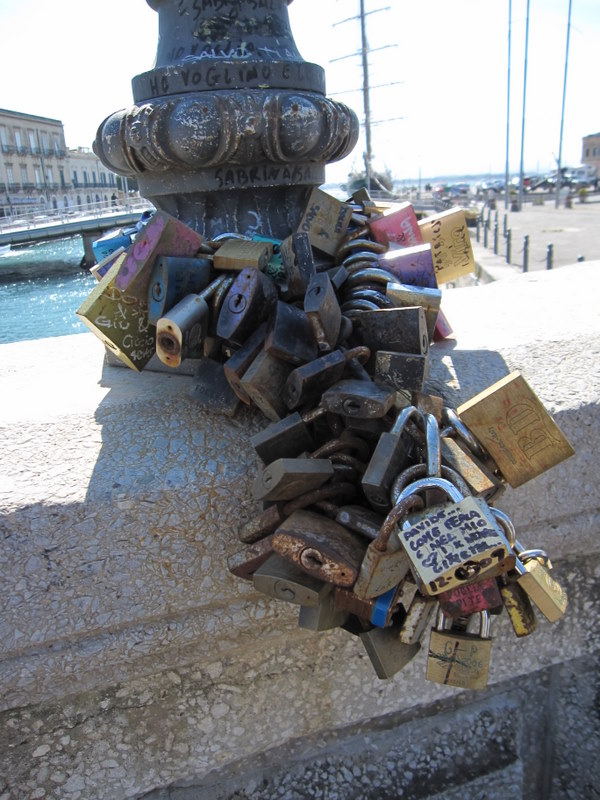 Bay of Siracusa, and locks attached to the bridge onto the island of Ortygia 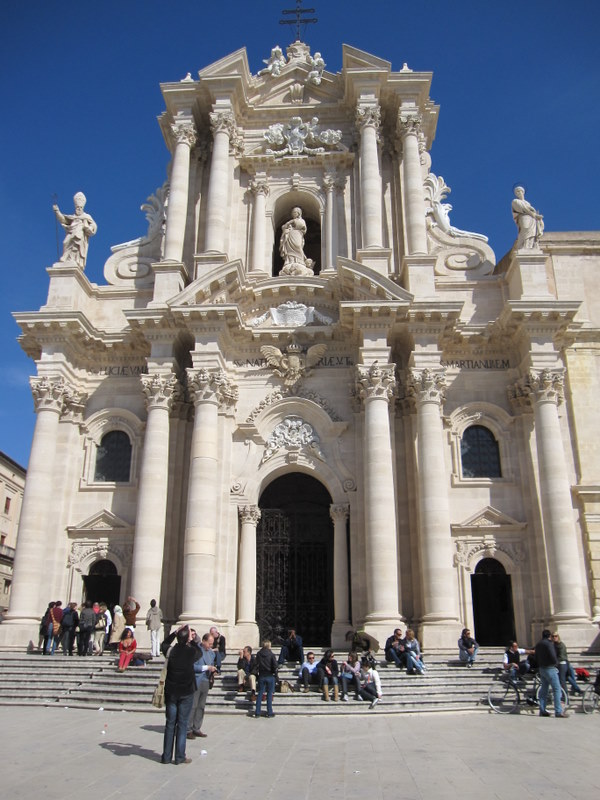 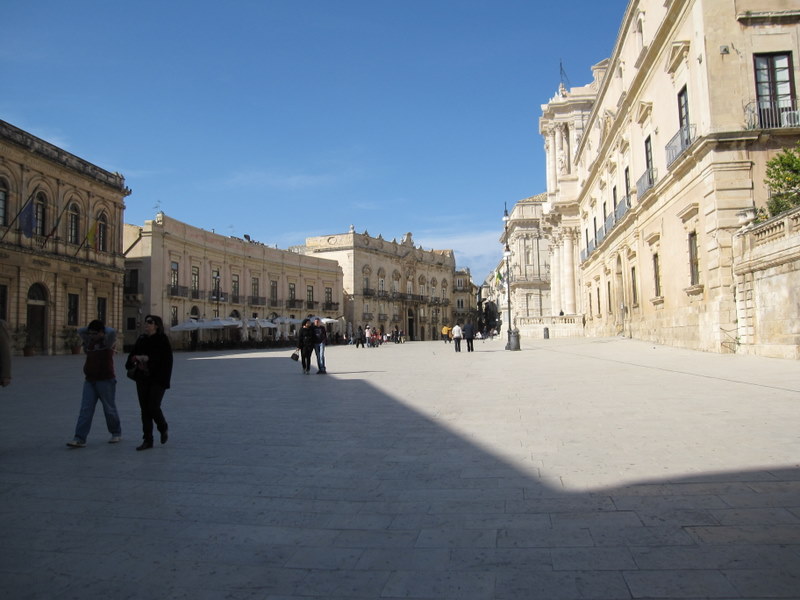 Duomo of Siracusa and the Piazza Duomo 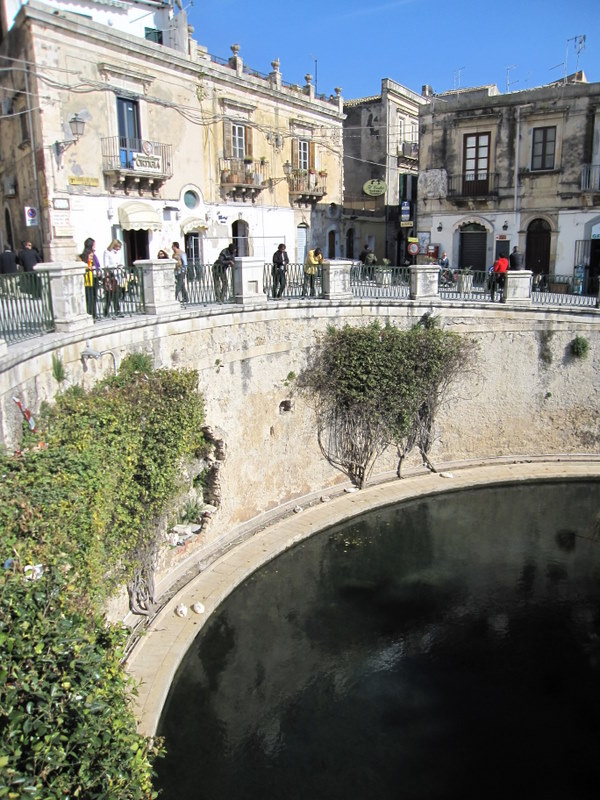 Fountain of Arethusa: a Greek myth tells of the nymph Arethusa, a follower of Artemis, who was pursued by a man; Artemis took pity on her and turned her into this pool of water to help her escape from him.

After a pleasant day in Siracusa we got on the night train back to Rome, arriving on Monday morning in time to shower and then head to class!

Cultural notes about Sicily: We were warned by multiple friends that the people in Sicily aren’t very nice, that the men are aggressive, and that the cities are dangerous–but we didn’t encounter anything like that at all! Everyone we met was very helpful and nice to us (perhaps because we always spoke Italian), and even all the traveling was pretty simple. Catania, I’ll admit, was dirty, but overall we felt very safe everywhere and had a great time. Perhaps everyone seemed nicer in comparison with Tunisia, where the vendors really are aggressive, but our travels in Sicily were easy compared to travel there. The food was good and the countryside we saw from the train and buses was beautiful. I would especially recommend Agrigento, although it’s more expensive there than in the other cities. Sicily is especially good to visit for Baroque architecture and as a place to see many different architectural styles together in one place. But if you go–fly, don’t take the night trains! The night trains are much less glamorous (and comfortable) than they sound.