The weekend of April 3-5 was my Late Antique/Early Byzantine class field trip to Aquileia, Grado, Ravenna, and Classe, all part of the Upper Adriatic Region of late antiquity. Our professor has a great sense of humor, but is also likes to push us as hard as he can. We are used to his fast walking during our weekly excursions around Rome, but were preparing for the worst on this “death march,” as he called it, through the upper Adriatic. Professor Gadeyne doesn’t like to stop for any reason!

We started in Aquileia, which was a moderately important trading town in the Late Antique age (4th-5th centuries), the time period we’re studying. 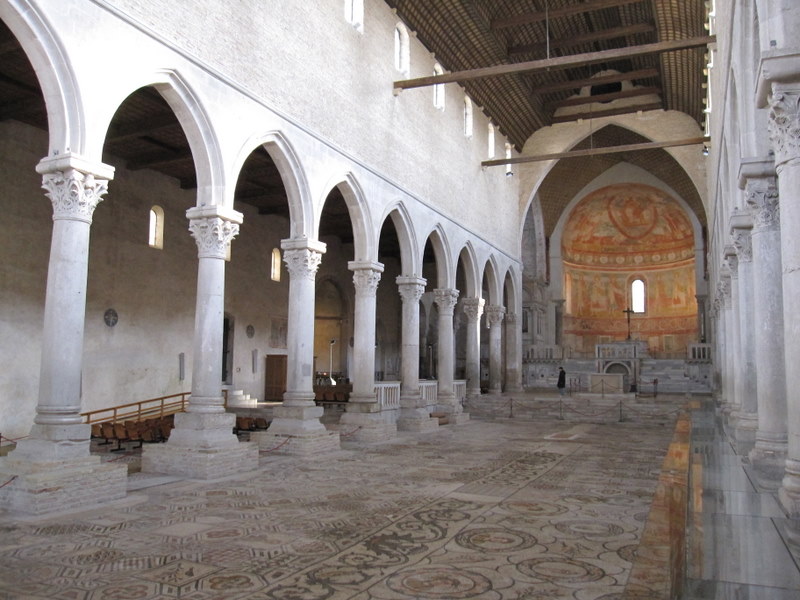 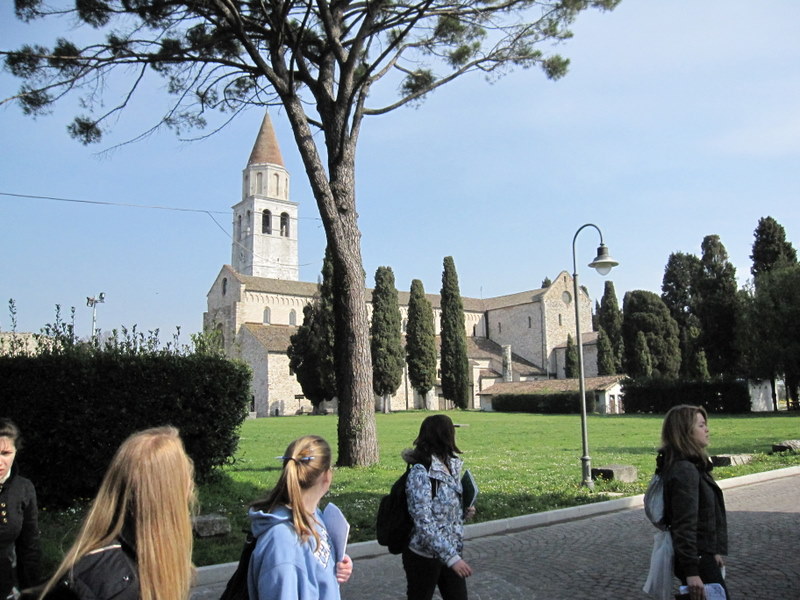 The cathedral at Aquileia is unusual because there were actually two full-sized “cathedrals” built next to one another. This type is called a double basilica. The mosaic floors from the earliest phases of the building have been preserved, which you see below. The mosaic was just amazing. 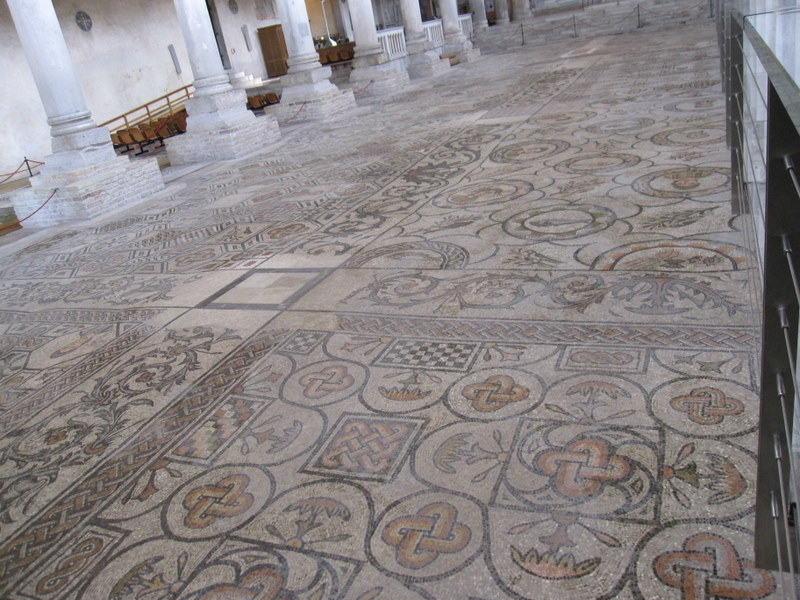 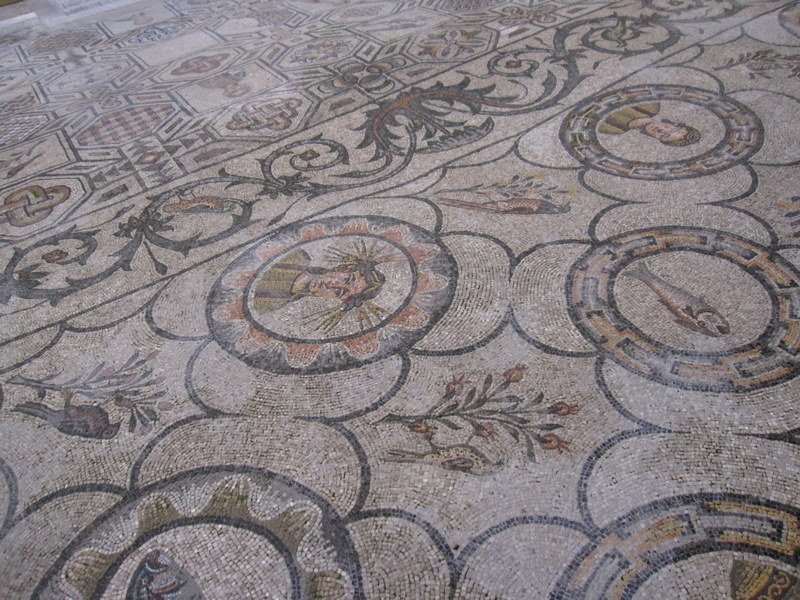 Mosaic from the double basilica at Aquileia

Our next stop was Grado, the port of Aquileia, which is up a river a few kilometers from the Adriatic Sea. Grado and Aquileia fought over who would have the bishop located there, and during a protracted religious battle called the Schism of the Three Chapters, Grado and Aquileia each had their own bishop. Below is the cathedral of Grado. 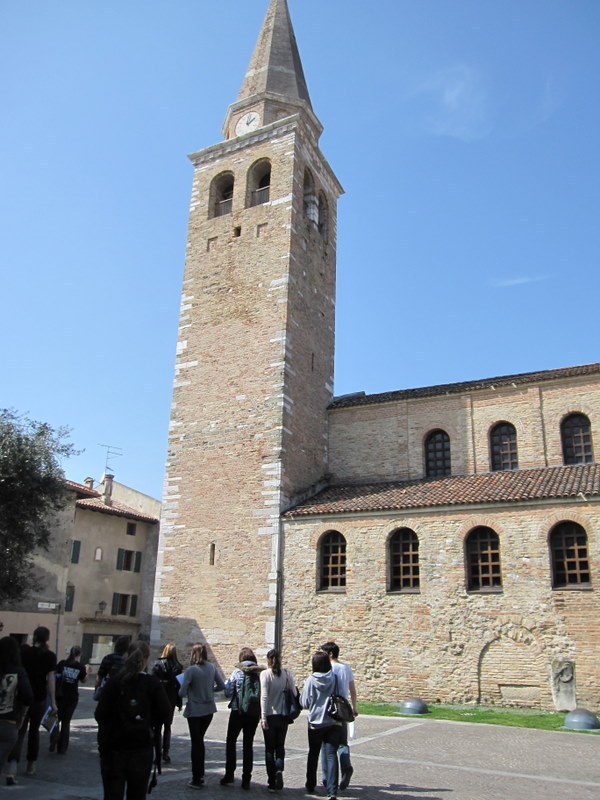 Finally, we were on to Ravenna, capital of the western Roman empire after Milan. Ravenna has many interesting 5th and 6th century churches built both by Romans and by the Ostrogothic rulers of Italy, who ruled until the Byzantine empire took back this area under Justinian. Below is one church whose original level is now below the water table (the water table has been rising steadily in this area for hundreds of years) and has fish swimming in what used to be the apse, and is now a crypt below ground. 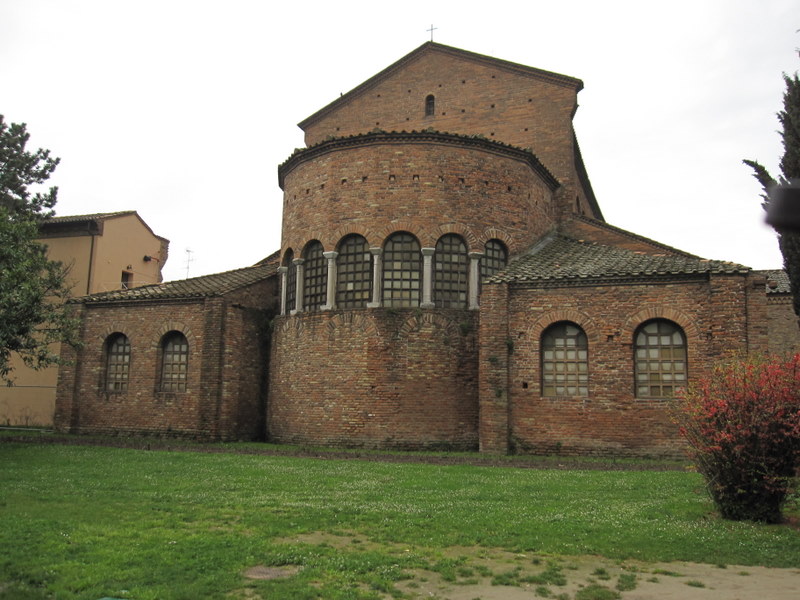 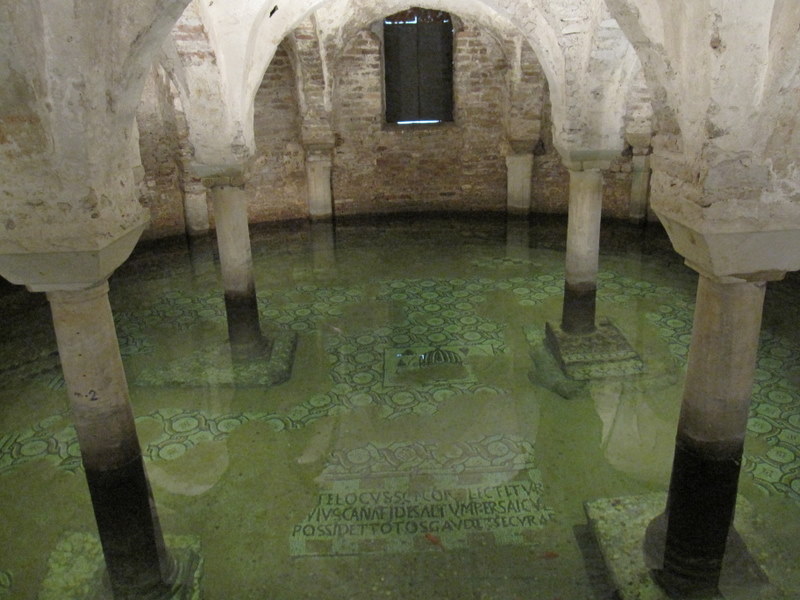 Ravenna, as capital of the Ostrogothic rulers of Italy, was home to both Orthodox and Arian Christians; so it has two cathedrals, one for each group, and two baptisteries. The Arian baptistery is below with its mosaic; the Orthodox baptistery is almost identical, including the decoration of its mosaic! 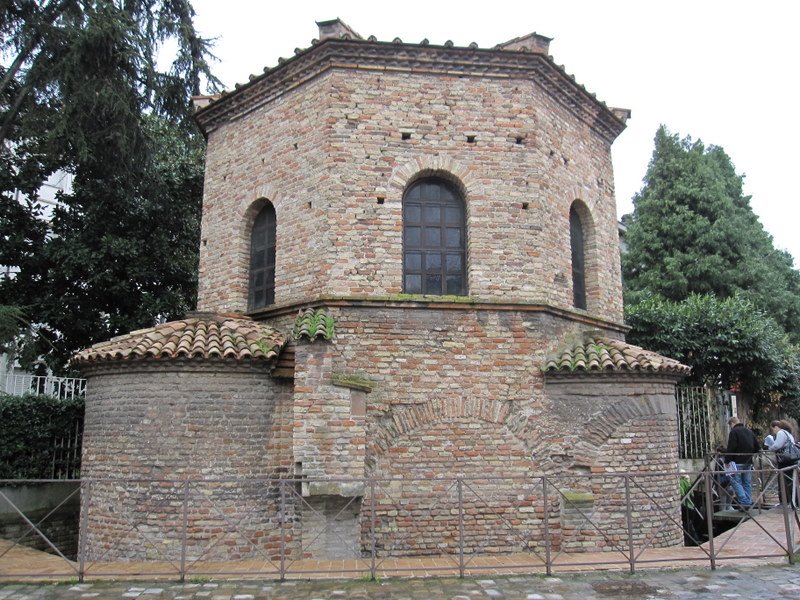 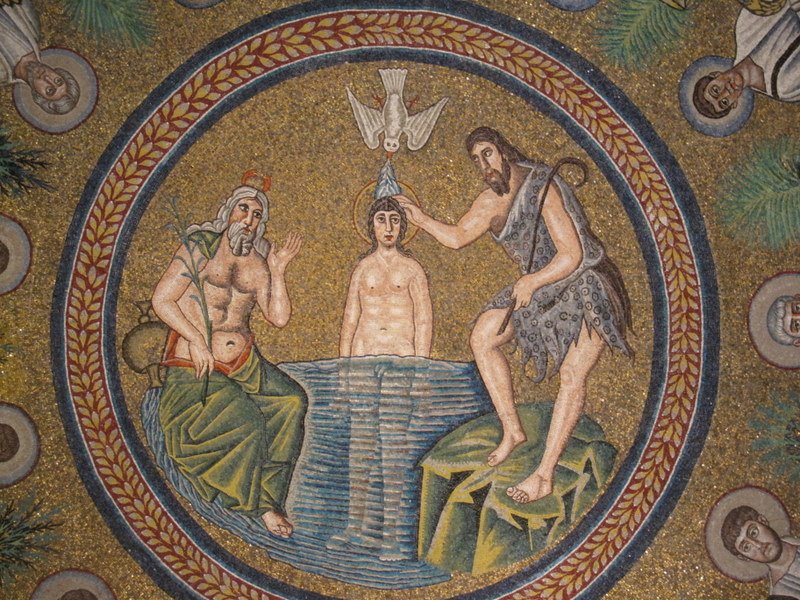 Arian Baptistery and dome mosaic of the baptism of Christ

Other churches we saw included Sant’Apollinare Nuovo, below, and San Vitale, the church that I researched for my presentation in Ravenna. 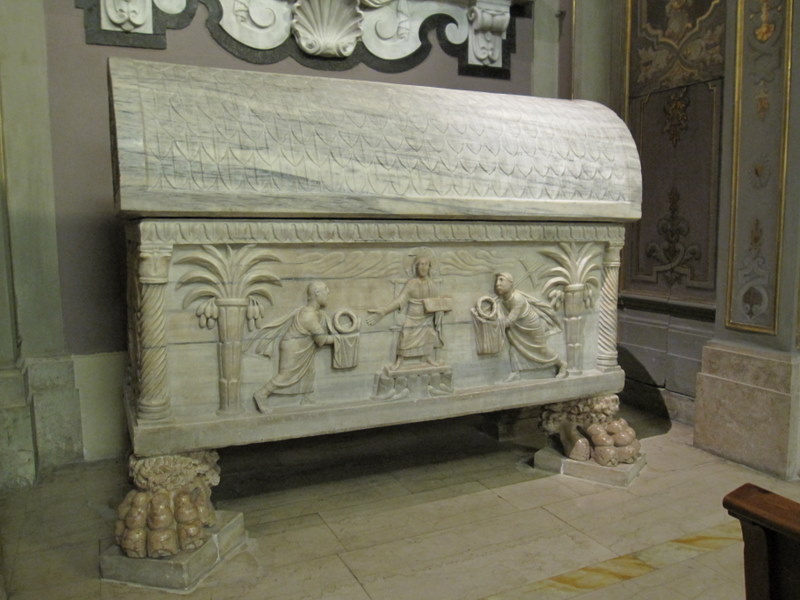 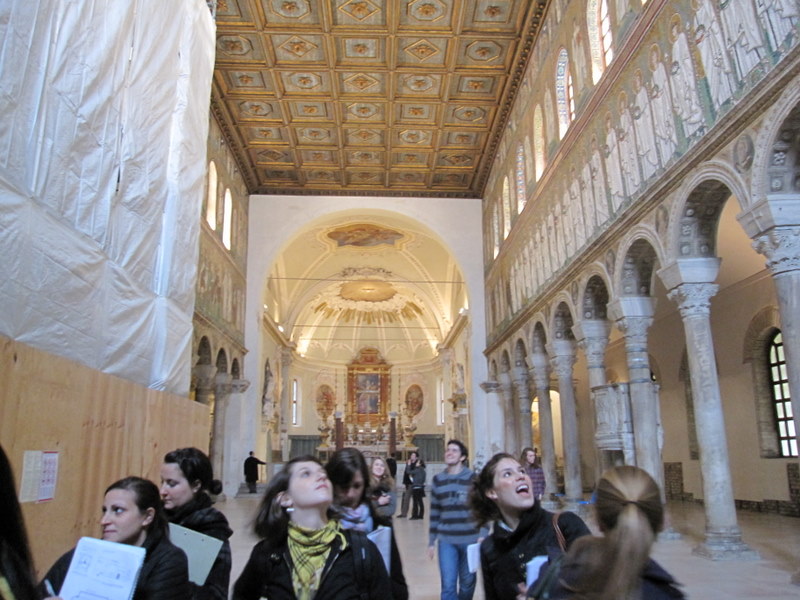 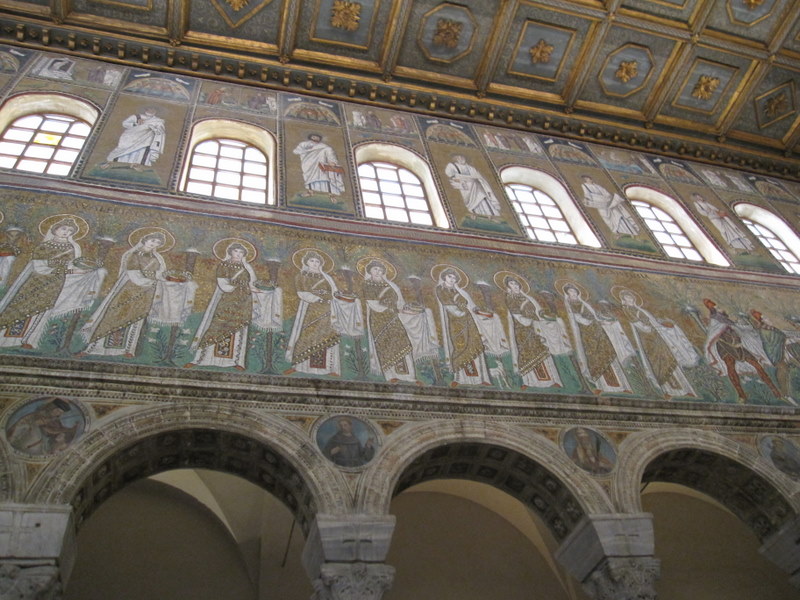 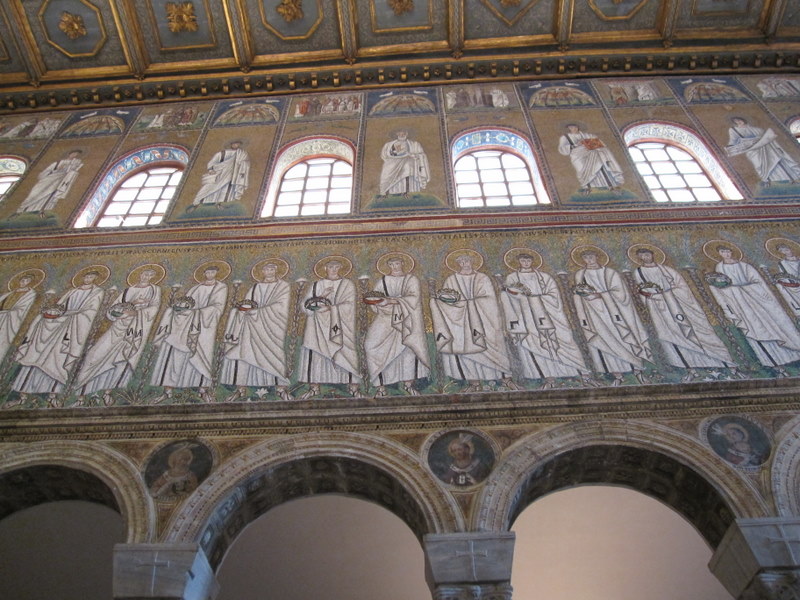 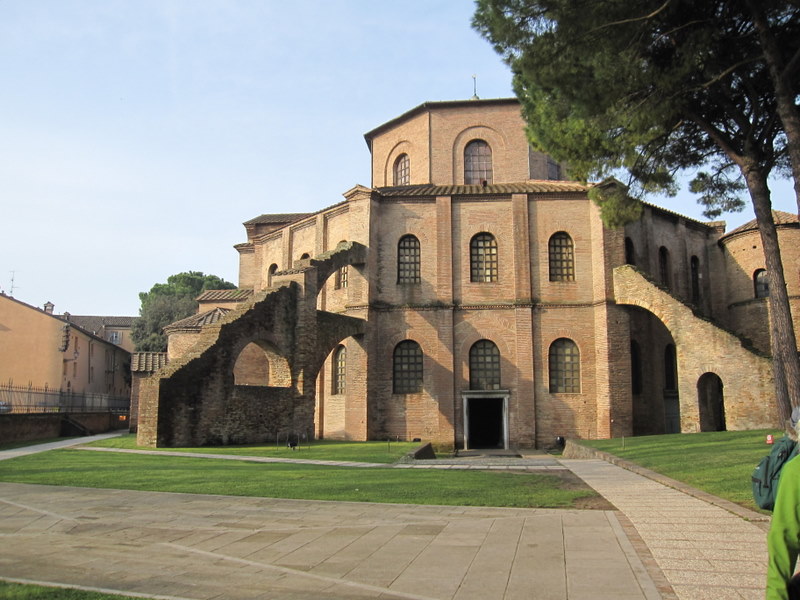 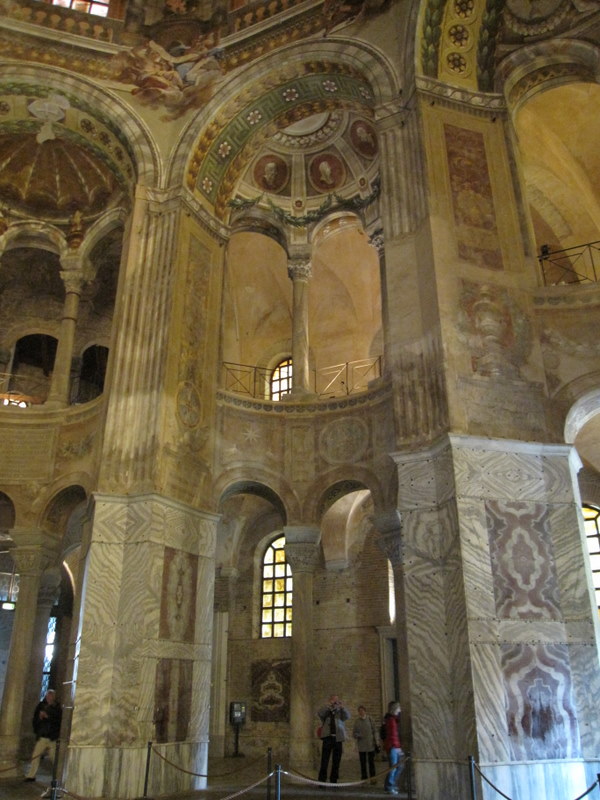 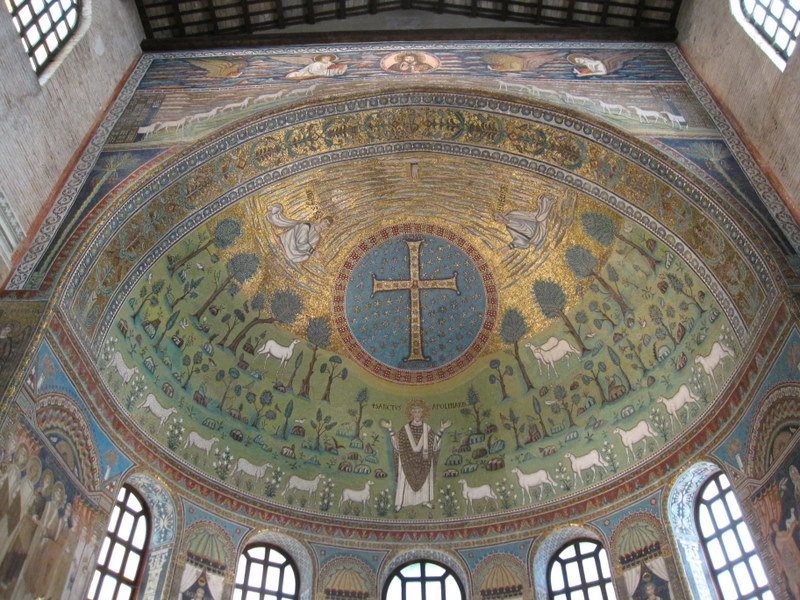 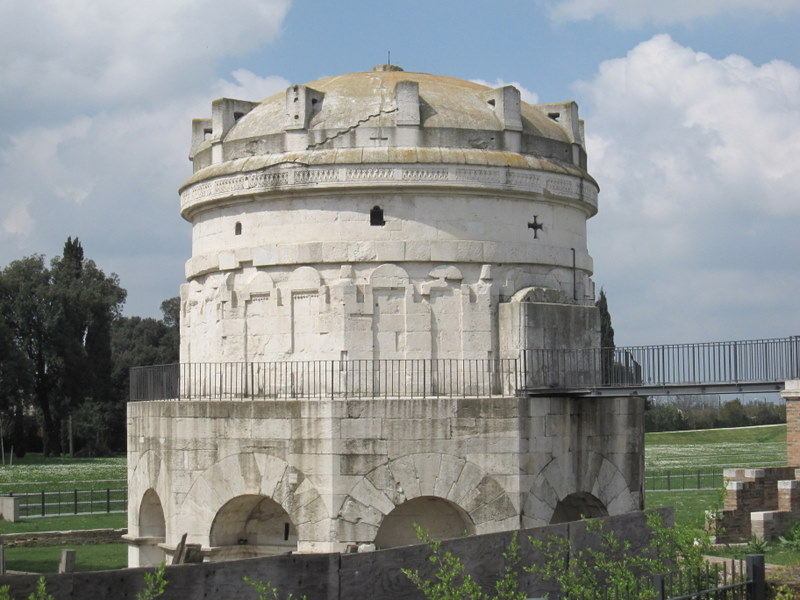 Apse mosaic from Sant’Apollinare in Classe and the mausoleum of Theodoric, the Ostrogothic ruler of Italy. The top part of the mausoleum is a solid block of stone; we still don’t know how they got it up there!

Ravenna was a really nice city, even aside from its well-preserved Late Antique and Early Byzantine monuments that we focused on for my class. It’s incredible that so many buildings there have survived from the 5th century, mostly because the town became unimportant during the middle ages so no new large building projects were undertaken. And the death march wasn’t even that bad – probably because we were expecting the worst! At the end of the trip he took us all to a restaurant and treated us to wine and a local specialty of baked focaccia bread. But we were all glad to get back to Rome to get some sleep after all the trekking through Ravenna!