Today was our first day meeting with different peace and justice groups in Palestine. At this point I should explain that our trip is following what’s known as an “alternative” or “authentic tourism” itinerary - we’re making a point of staying in the West Bank and meeting with locals, rather than following the “standard” itinerary that stays only in Israel and sees only the holy sites. We met with two groups today, ARIJ (Applied Research Institute - Jerusalem) and the ICB (International Center of Bethlehem, part of the Diyar consortium). We started the day at ARIJ by attending a lecture/discussion session with one of the representatives, together with a Canadian group that was there. (You can view a presentation similar to the one that we saw here.) This session covered the history of the Israeli-Palestinian conflict in detail from a Palestinian viewpoint, and challenged us to take these facts back to the US, since they aren’t often described in the US media.

We then met with Angie, the public relations representative at the (Lutheran) ICB. She is a Palestinian Christian, and described both her story and the lives of some of the young people she has worked with. Her message from the ICB is that they are working hard, through arts programs, to bring hope and change to the people (and especially youth) of the region, through youth programs, schools, art workshops, medical facilities, elder care, etc. Her presentation was terrific, both one of the most personal and moving and most hopeful that we have heard. She showed us some parts of the center, including an ancient Palestinian house below the gift shop that has been dated to before 500 AD. 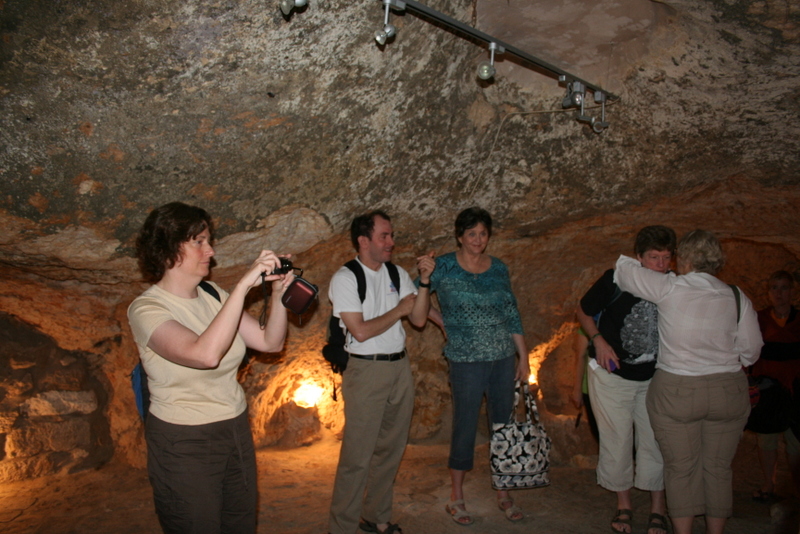 After meeting with Angie we walked to the Church of the Nativity, to visit both St. Catherine’s, the Catholic church there, and St. Helena, the original church built by Constantine that is shared by Catholics, Orthodox, and Armenians. St. Catherine’s is, in my opinion, pretty unremarkable (it was thoroughly rebuilt in the 1800s). We couldn’t get in to see the Grotto of the Nativity at St. Helena’s, the original church, because the line was so long, so we decided to try again after lunch. Instead we walked over to see the “Milk Grotto,” a calcite cave venerated by Catholics. I didn’t think this was especially interesting either, but the new (modern) chapel and cloister that was attached to the grotto was lovely, and I wish I knew the architect for that project. 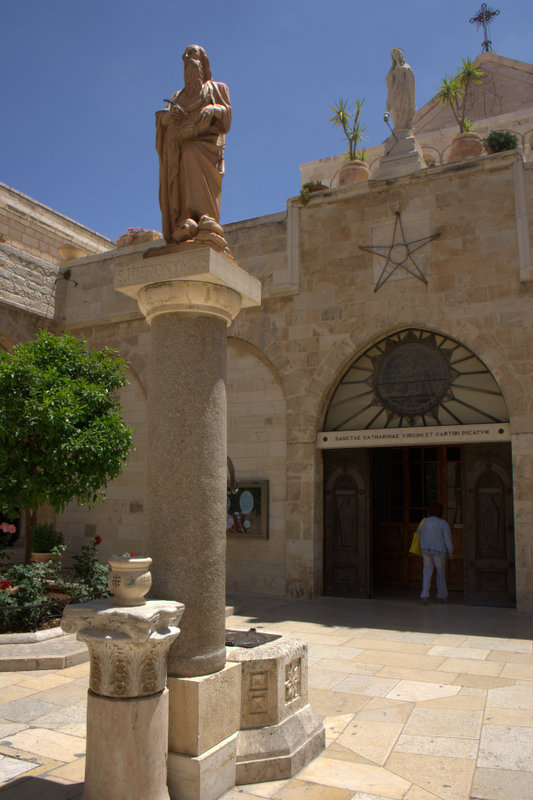 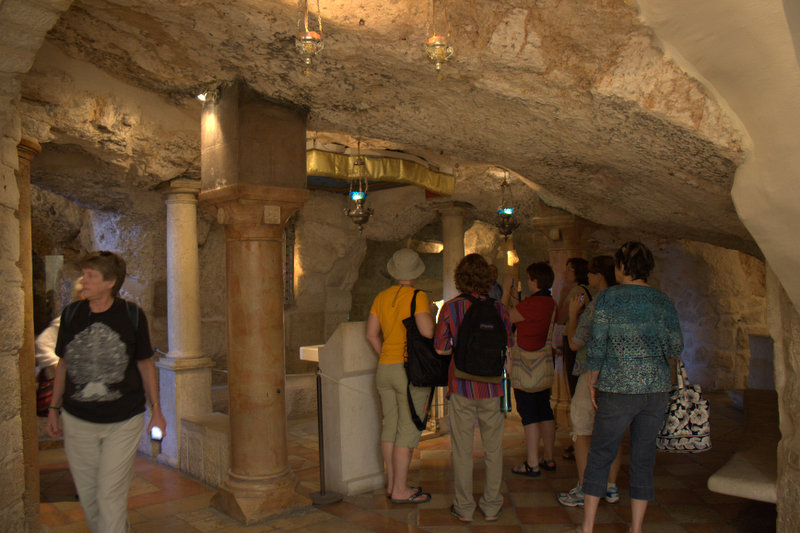 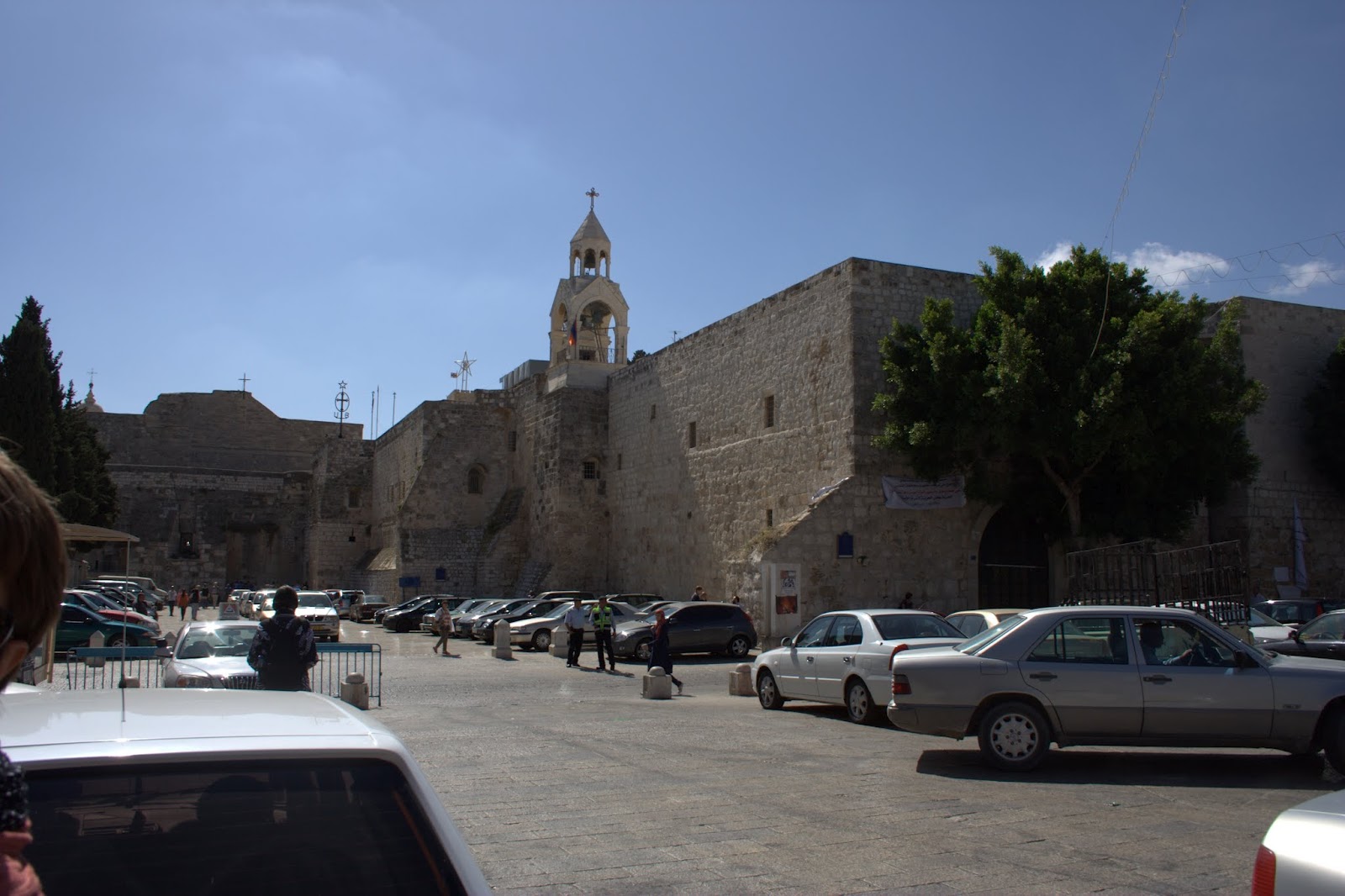 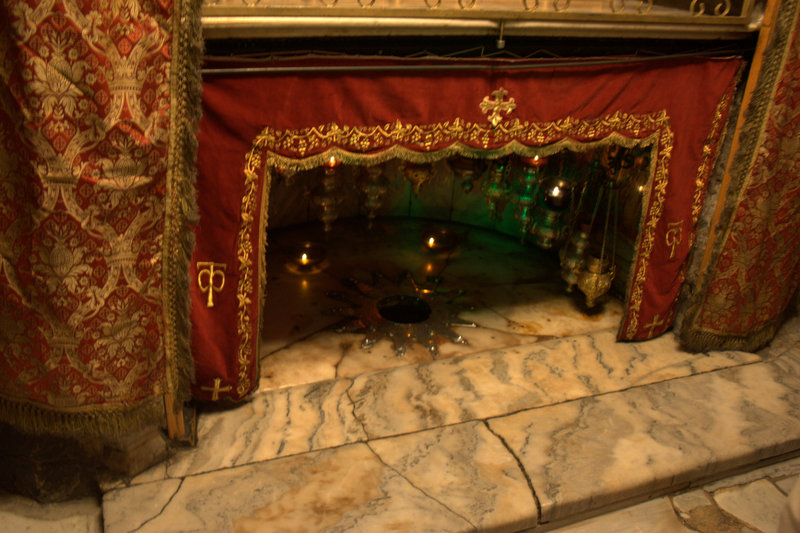 Next we met with a deacon and teacher at the ICB who talked more about the work at the center, and about the general outlines of the conflict. Afterward we perused the ICB gift shop, which includes handmade ornaments made from broken glass as a symbol of turning the destruction of the Second Intifada into things of beauty. We also visited a fair trade embroidery consortium, checked out the Bethlehem Peace Center bookstore, and wandered around a bit. One of my favorite items was a felted wool nativity set, which is produced by a l’Arche community here in Bethlehem. We tried some Arab dessert, kanafeh, which was quite tasty.

After that was dinner at the Lutheran center and bed - super tired! I’m having to adjust to an “early” schedule, starting around 7:30am, instead of my usual day at home that starts around 9 or 10!

Day 4 began with a lengthy bus ride and having to cross through multiple Israeli checkpoints as we went in and out of the West Bank. On our way out of Bethlehem, a young Israeli soldier boarded our bus and glanced over our American passports before waving us through. The soldiers here are all young, since military service is mandatory, and their automatic weapons sometimes seem as big as they are. We reflected on how our American passports allow us to travel anywhere in the country, while Israelis and Palestinians are confined to their respective areas of the country because of the Israeli occupation and security.

Our bus went south along the Dead Sea, finally arriving at Masada around 11am. Masada is both a really cool natural site and an interesting archaeological site; it’s a fortified mountain/plateau that was used by the Romans and the Jews in Roman times, built up significantly by Herod the Great. It’s also, we discovered, an interesting site politically, because of what the Israeli tourism ministry has chosen to focus on in its video presentations and other text. There is one Roman historian who recounts that there was a mass suicide at the site when the Romans invaded it during the Jewish Revolt of the first century AD. Apparently there is no archaeological evidence of this, but the video presentation before you go up the mountain presents the Jewish choice of “death before slavery” as a heroic and victorious act. I was a bit put off by the glorification of mass suicide, but the site is beautiful nevertheless. 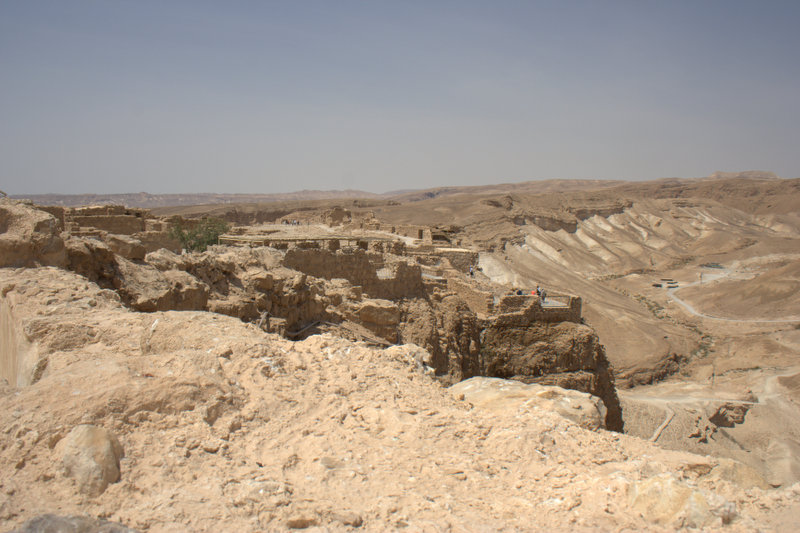 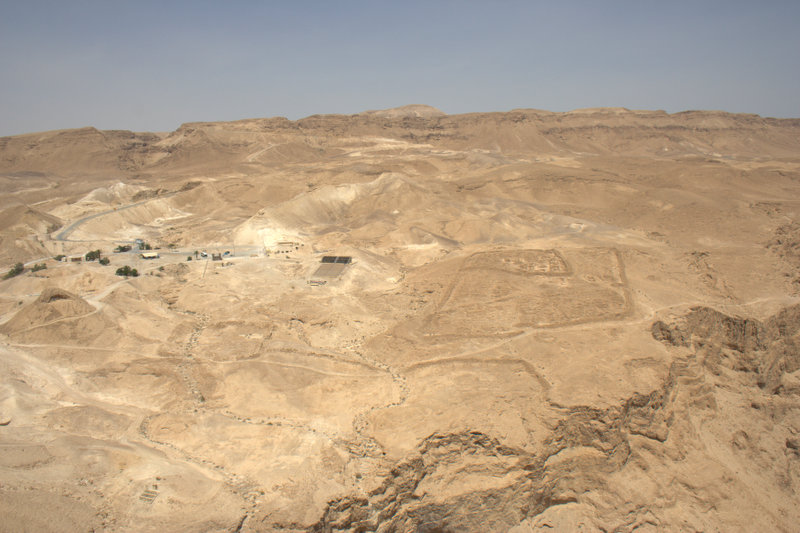 After Masada we went back up the coast of the Dead Sea to Qumran, the location where the Dead Sea Scrolls were found. There aren’t any scrolls there now since they’ve all been taken to Jerusalem, and you can’t get anywhere near the cave, but the view was nice over the Dead Sea. Not my favorite site. The video there proposed that the site was inhabited by Jewish Essenes, and that possibly John the Baptist lived with them at some point, but apparently there is debate over who actually lived at this site (which was occupied for a long period of time). As usual, it’s hard to tell from the evidence! I just wished that the material we read at the site had given some better context, which was easy enough for me to find on Wikipedia, but should have been presented there. 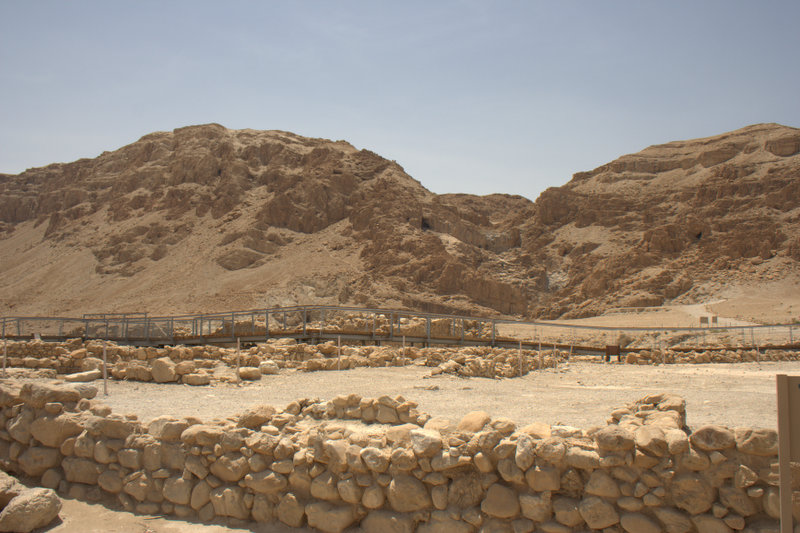 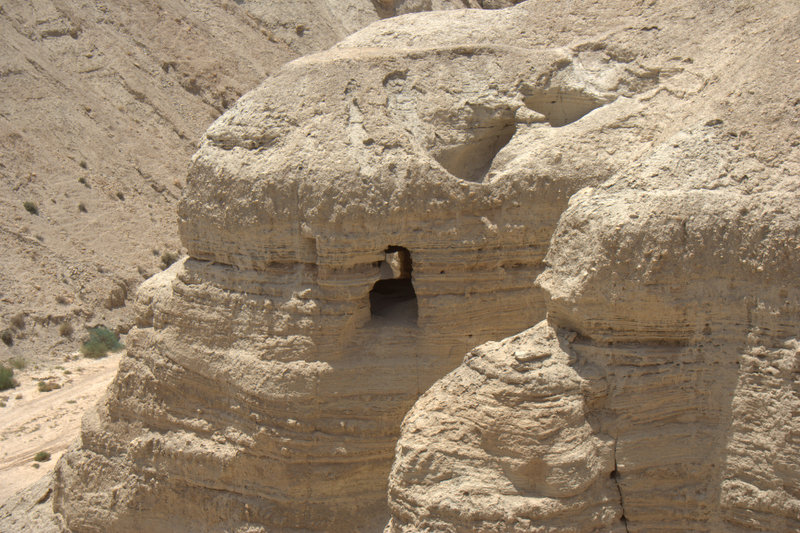 Finally, after an overpriced touristy lunch at Qumran, we headed further up to the top of the Dead Sea to visit one of the beaches there for a “float.” Swimming, splashing, etc in the water is not permitted, only floating on your back. This is a decidedly different beach from the ones in Sarasota, Florida - sharp, gritty brown sand, oily-feeling water that stings you when you’ve been in for more than a few minutes, and no vegetation or animals. Almost nothing lives in the Dead Sea. I went in for about five minutes and then was done. The rest of the group tried out the mud treatment, plastering stinging mud on their skin and trying to allow it to try before washing it off. The mud was really soft and squishy, which I found pretty disgusting. Anyway, it was an experience! 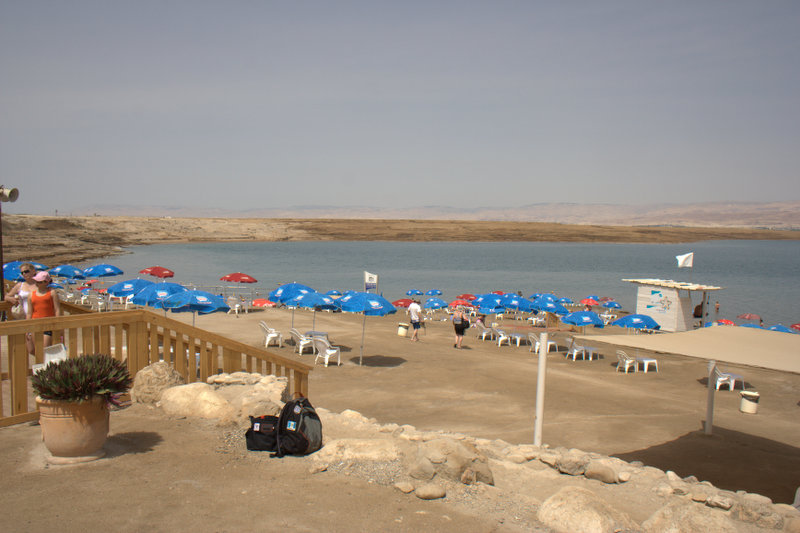 After our float we went back to Bethlehem, and took the opportunity when driving back in to the city to stop and take pictures of the “Separation Barrier,” also known as the Wall. This is the wall built by the Israeli military to separate Israel from occupied Palestine, and it snakes around in mind-bogglingly complicated twists, sometimes enclosing buildings on three sides or even going through people’s homes. We visited in particular the shop of a woman whose house has been cut off on three sides; you can see more about this in a piece on 60 Minutes called Christians of the Holy Land. Listening to Claire in person describing her experience with Israeli military was very moving, and the wall itself is an almost awe-inspiring presence around her home. The graffiti on the wall, by contrast, is almost all positive messages of peace and hope. I invite you to learn more about the wall by looking through the Wikipedia article and reading about some of the opposition to its construction on Palestinian land. 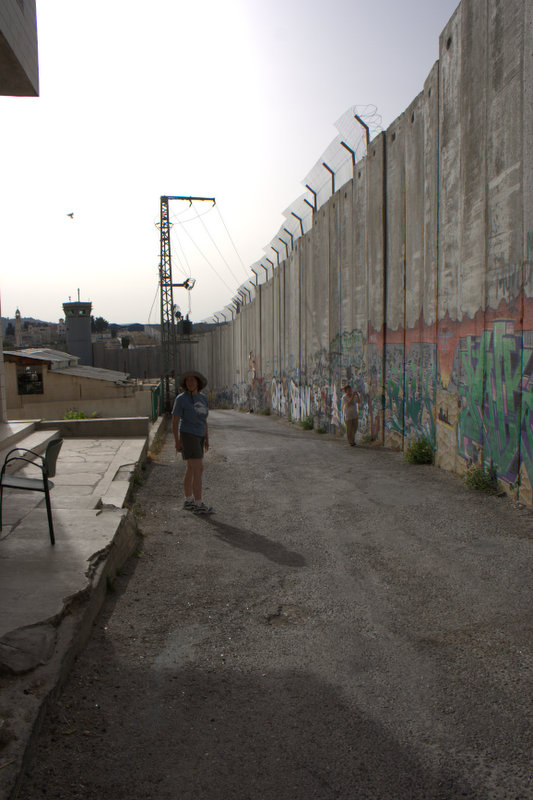 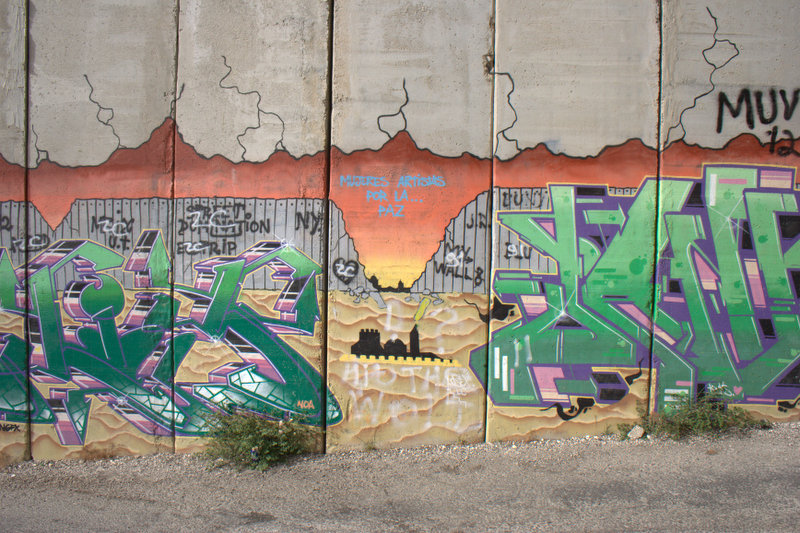 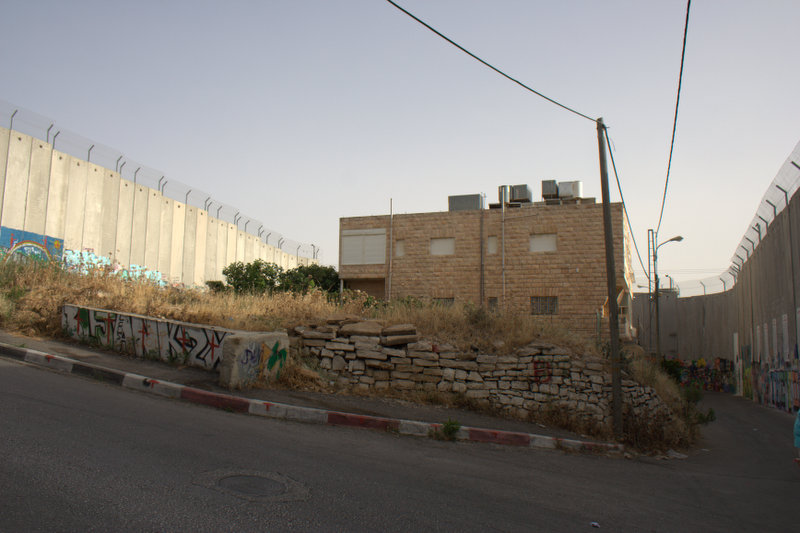 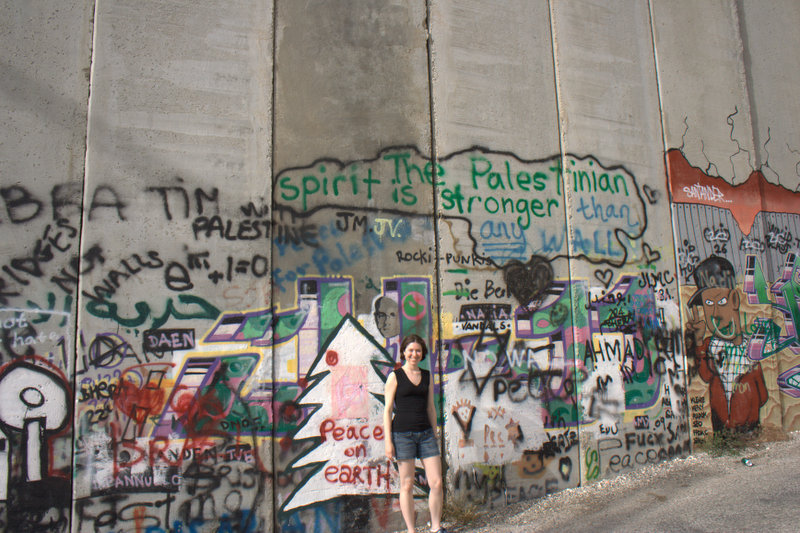 Finally we were back for dinner, and Presbyterian mission worker Doug Dicks came to have dinner and meet with us. He has been here working in the region for nearly 20 years now, currently living in Amman, Jordan, and is very knowledgeable about the region and about Palestine in particular, since he lived here for a long time. He encouraged us to walk through an Israeli checkpoint, which we will do later, and gave us his candid opinions about the BDS (Boycott, Divestment, Sanctions) movement in the church as a way to protest the occupation. After that we finally got to sleep! Busy day!