Note: Long post ahead - skip to pictures at the end if you need a break!

Second full day in Jerusalem: a half-and-half day of meetings and sightseeing. We began the day with a visit at our hotel from Fajr Harb of the Carter Center - yes, former President Carter’s Carter Center. The Center has a small office in Ramallah where the staff monitors elections and promotes peace through politics. The official stance of the Center is behind a two-state solution. Fajr was an excellent speaker, and we all appreciated his candor as he expressed both his personal views on the conflict and the views of the Center. Educated in the US, Fajr is clearly a bright young man who could be doing great work for his country, and he told us he wants to work in development; but as it stands, the best he can do is to work for the peace that’s needed before any development can happen. He told us that as a resident of Ramallah, in the West Bank, it’s easier for him to get to the US than it is for him to get to Jerusalem. The only reason he could meet us in Jerusalem at all is that his work with the Carter Center, an international (specifically, American) organization, allows him to obtain the required permit.

He concurred with an opinion we’ve heard here several times that the two-state solution is already dead: the “facts on the ground” created by Israeli settlements have made it impossible to negotiate a viable Palestinian state from what’s left of the territory that Palestinians control. But making the necessary changes in Israeli government and political opinion that could support a one-state solution, of Israelis and Palestinians living peacefully together, is extremely daunting. Yet this is what we have heard over and over from Palestinians: they are would like to live at peace with their Israeli neighbors, and even to become Israeli citizens, but they demand full rights and acknowledgement from the government of what they have lost. I personally cannot believe the response that Palestinians “will never want peace” or that they “hate” their Israeli neighbors etc; this is probably true of some people, but definitely not all, and probably not most. It was not true of anyone we met. (To be honest, the only people we encountered who had words of hate for anyone were the Israeli counter-protestors we saw demonstrating against a silent protest; but more on this later.) Similarly, some Palestinians argue that the problem for them is not an Israeli state for the Jews, but a Jewish state for Israelis, since non-Jewish Palestinians would, by definition, be excluded from a Jewish state. Some people we spoke with said they would be happy to live in an Israeli state with and for Jews, as long as it was not a “Jewish state” that excludes or discriminates against non-Jews.

After talking politics with Fajr, we took our bus up to the Mount of Olives to visit the Augusta Victoria Hospital, with a great tour led by Anna Johnson. She was a Lutheran youth volunteer at the hospital (a YAGM, similar to our own Presbyterian YAVs) and returned after college to continue working here. Augusta Victoria is a specialty hospital that serves Palestinians from all over, with departments (eg, pediatric oncology) that are not available at other hospitals. The hospital is in what used to be a very large German guest house, and is hoping to expand if they can ever get the building permits approved. (Remember my earlier discussion on building permits?) Even major Palestinian institutions, like hospitals and schools, face the same lengthy and nearly-impossible permit process that is typical of the Israeli-controlled areas of the West Bank. From the hospital grounds we could see the Wall cutting through the middle of neighborhoods right outside Jerusalem, and the point where it ends, incomplete. From this view, it seemed clear to us that the wall was doing little except make life miserable for ordinary people, since someone seeking to enter the city illegally could just walk right around it. (See below, a little left of center in the photo.) 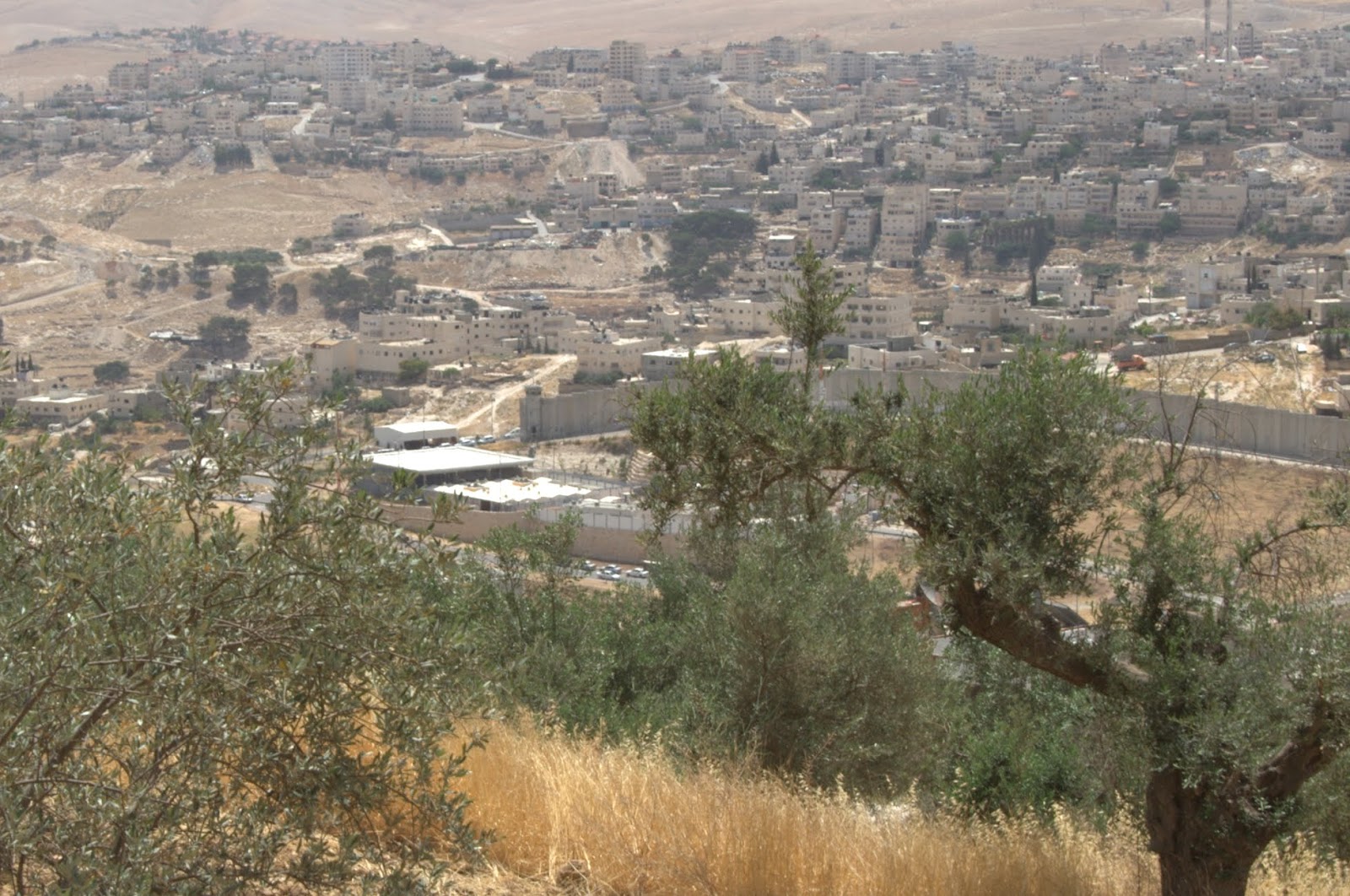 We asked Anna what is the biggest issue facing the hospital, and surprisingly, she answered that it’s patient access - patients find it extremely difficult to get to the hospital because it’s in Jerusalem, where it’s so difficult to get permission to enter. The hospital has tried to address this by having a department that does nothing but apply for permits so patients can enter Jerusalem, and has set up a bus service so staff (doctors, nurses, etc) and patients can more easily pass through the checkpoints. They even have places for family members to stay, since one of the issues is that patients may be allowed in one day for a chemo treatment, and not the next, which is actually worse for the patient than not starting chemo at all. To prevent this, patients and their families stay at the hospital accommodations for the intervening period so they are guaranteed to finish their treatment. One of the most moving stories Anna told is about children from the Gaza Strip who need radiation treatment, which is only available at August Victoria. These children are generally given permission to leave Gaza to come to the hospital with their grandparents, but not with their parents, who are denied permits. The hospital views this as a “blessing in disguise” because the grandparents can also be seen and treated while they are there at the hospital’s elder care department, since medical care for the elderly is very limited in Gaza. 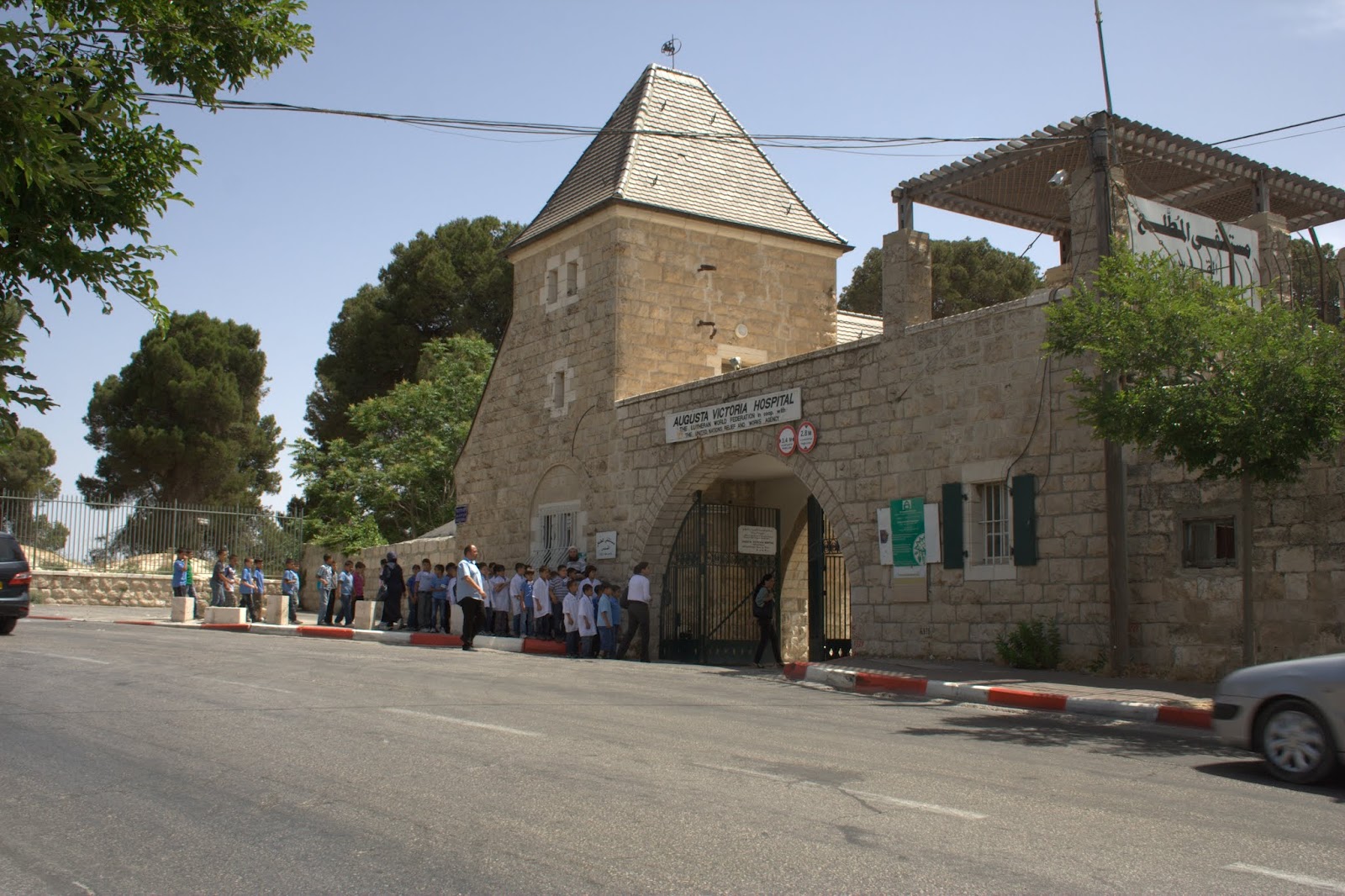 We had lunch on our own back in Jerusalem, and then returned to the Mount of Olives for the sightseeing part of our day. We spent the afternoon walking down the Mount, visiting many of the sights on the way. Unfortunately it was really hot and there was very little shade, so we were nearly dead by the end of the afternoon… but I discovered my favorite church there, so it was worth it. At the top we took photos of some great views of the city, including the large Jewish cemetary on the slopes of the Mount, and then began our descent. 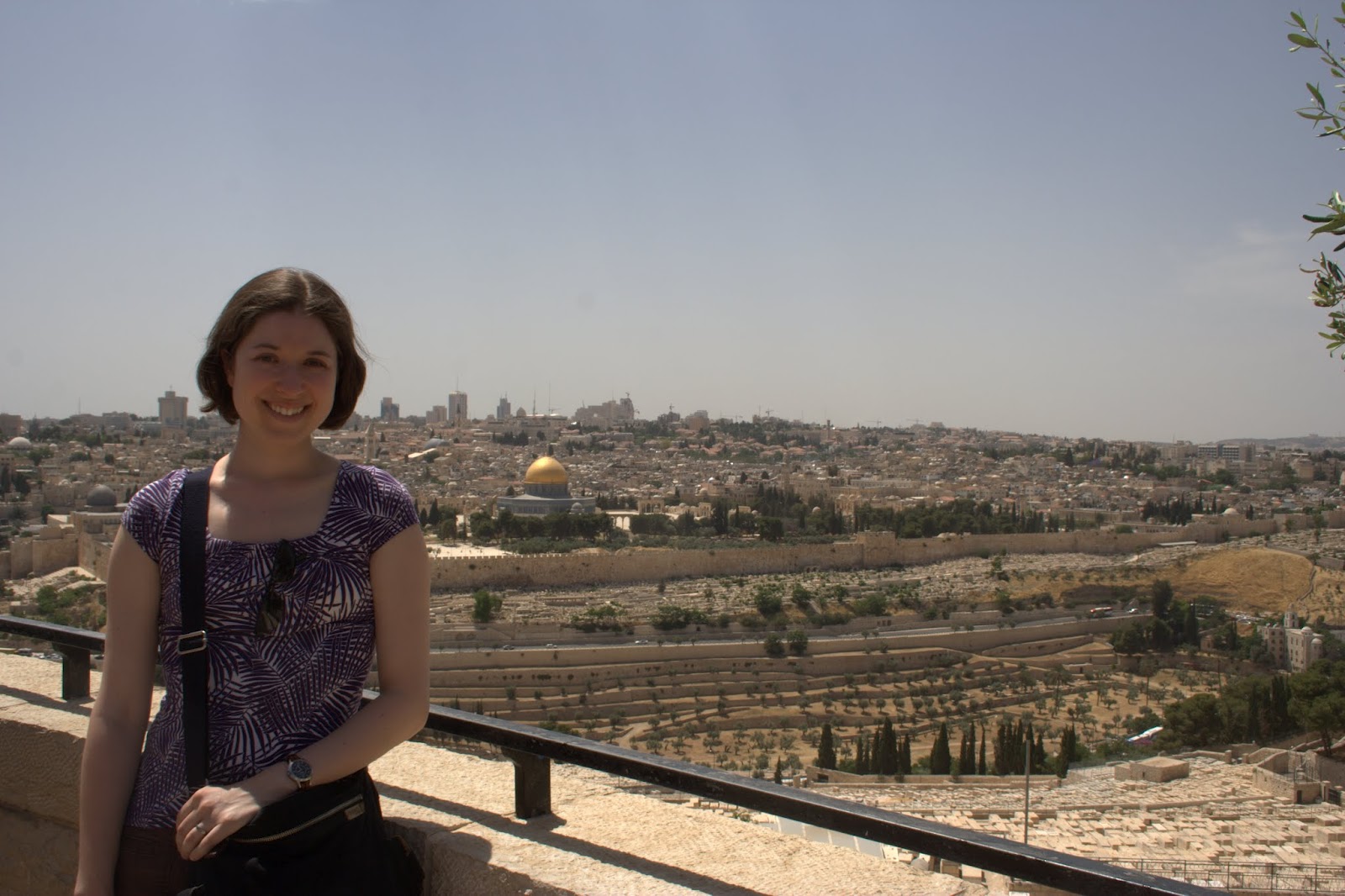 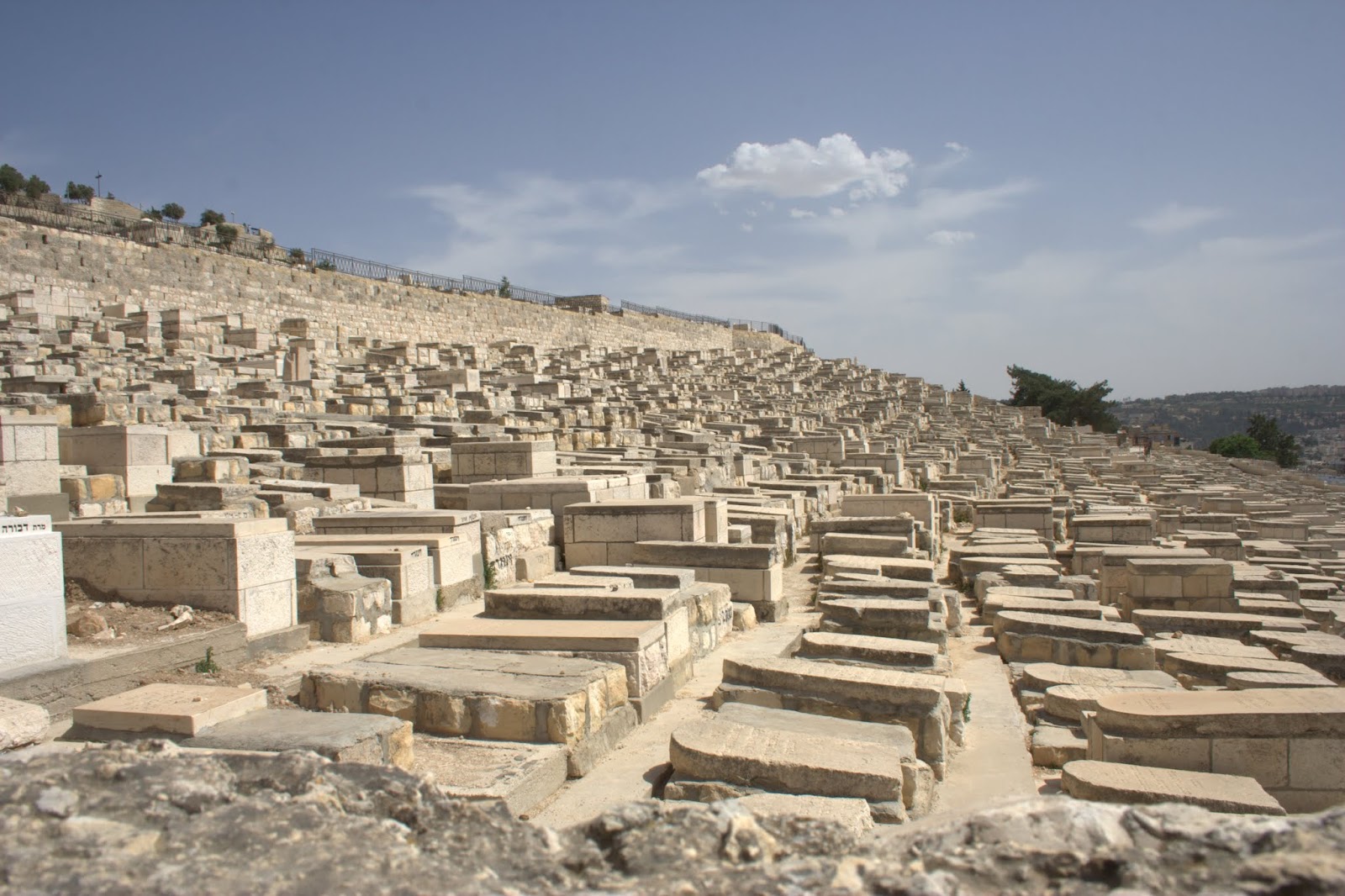 First stop was the Church of Dominus Flevit, another Antonio Barluzzi church, built near a Christian necropolis. The chapel is sited so that there’s a view of the Dome of the Rock from the window behind the altar. This church also had a great assortment of cacti! 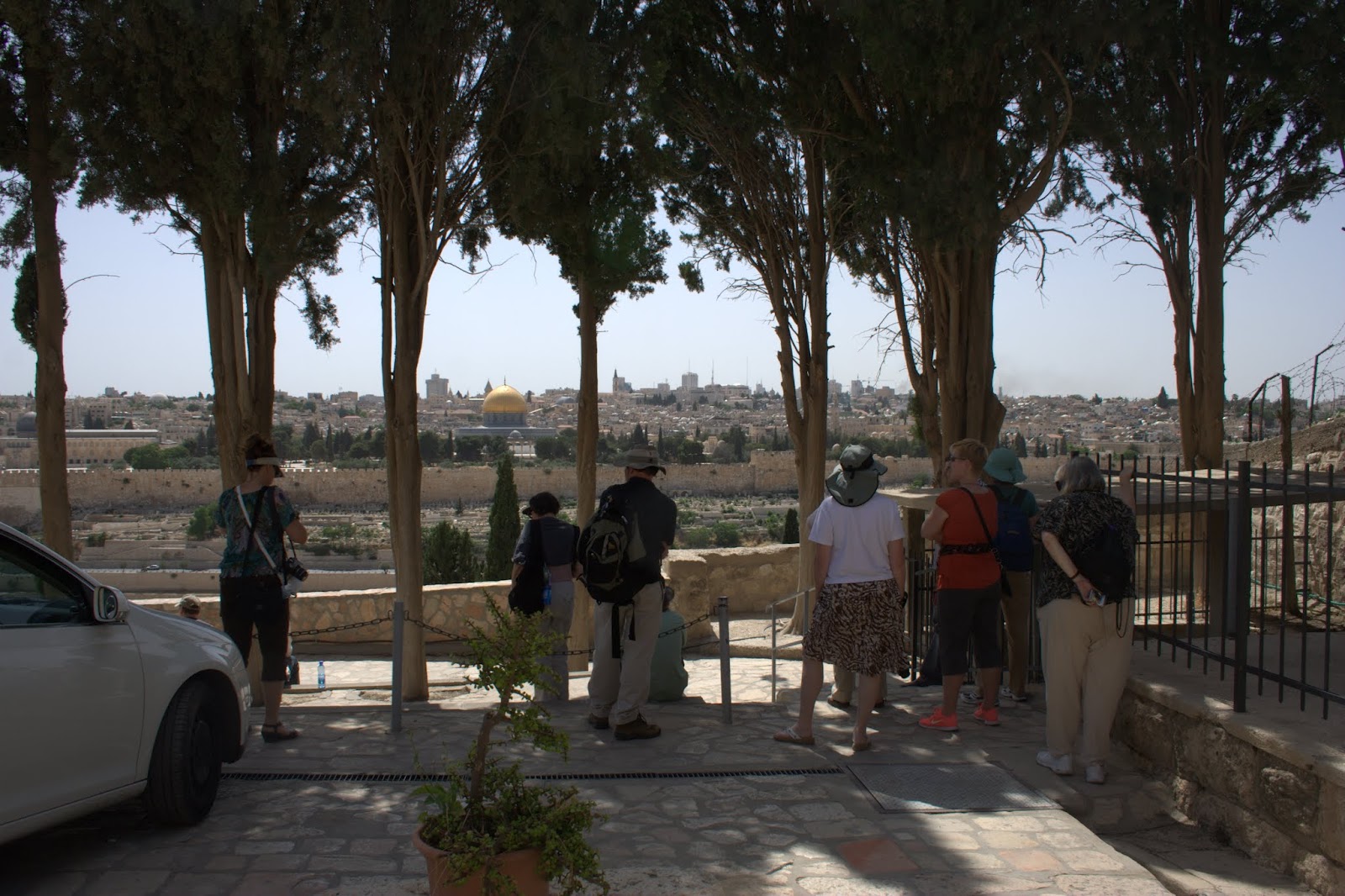 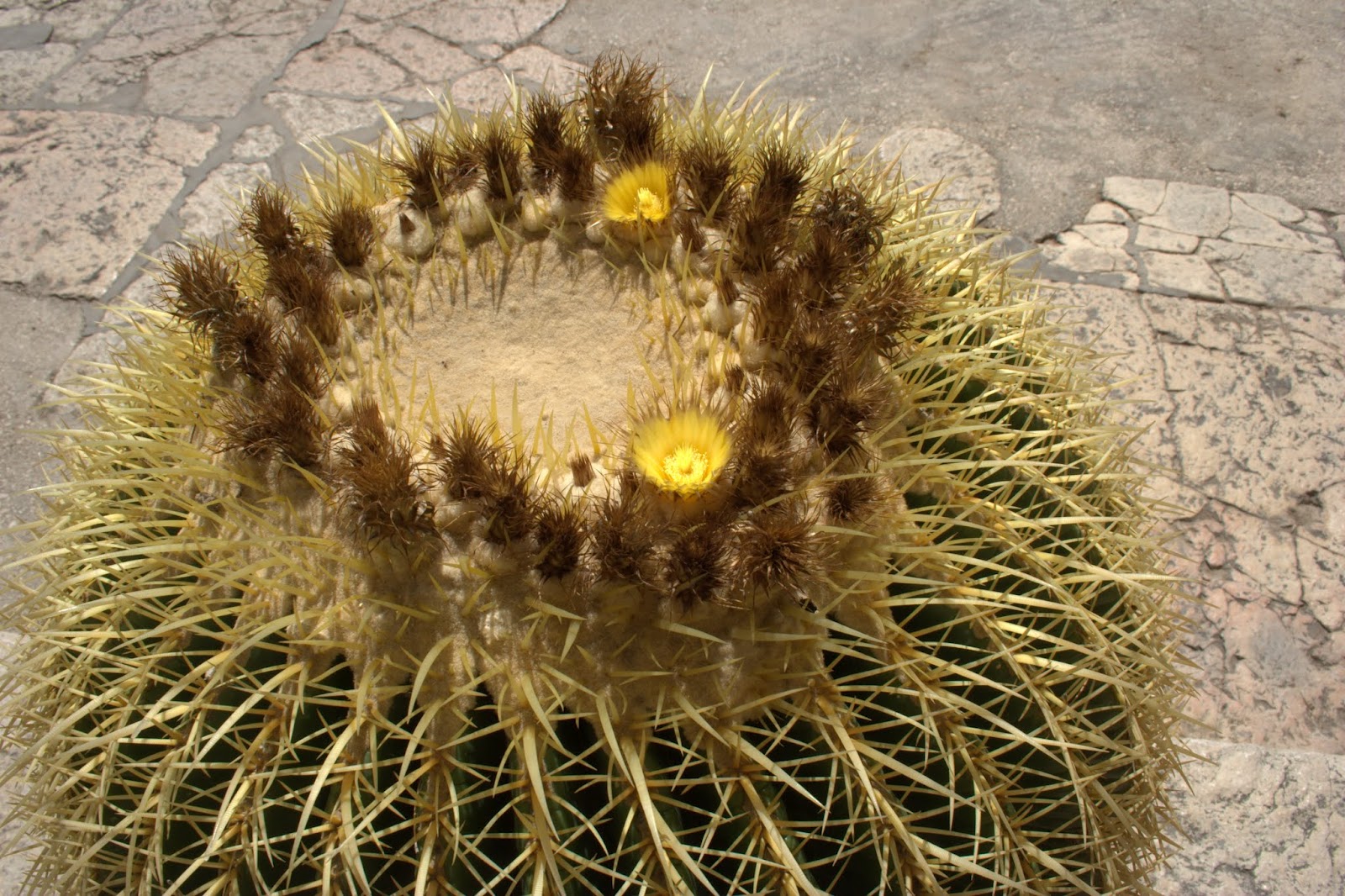 Next up was the Church of All Nations, next to the Garden of Gethsemane. This was my favorite church: another Barluzzi, it had blue alabaster window screens that made the interior look like it was bathed in ultraviolet light. It was dark and cool inside despite the extreme heat outside. The ornament, from the mosaic to the bronze olive tree reliefs, was fantastic. There were even interesting plants outside! (Not in the garden, though; that’s not actually accessible and was pretty silly looking, a small plot of olive trees with flowers planted around them.) A must-see church; the photos don’t do it justice. (This is fun: a virtual tour.) 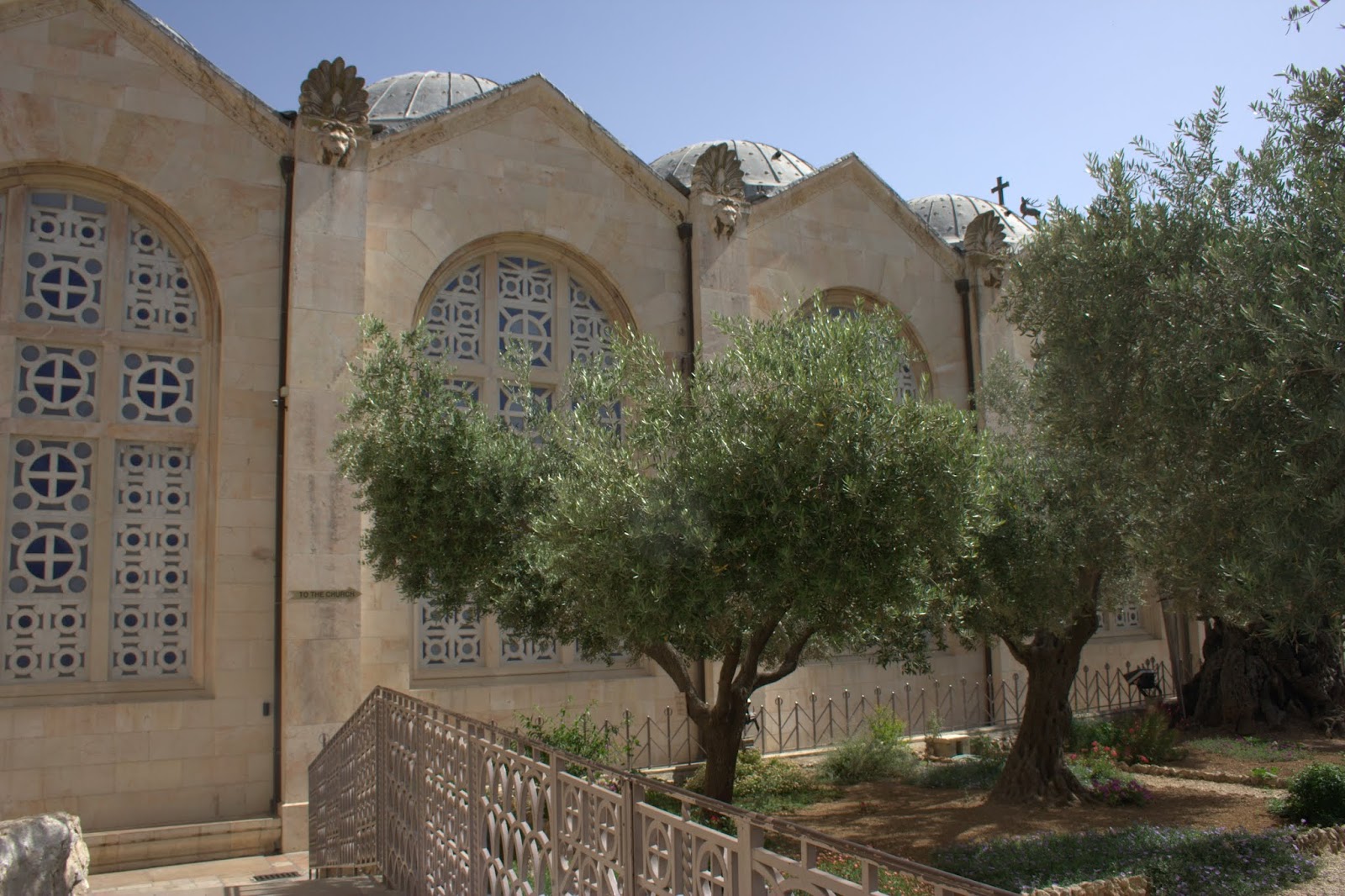 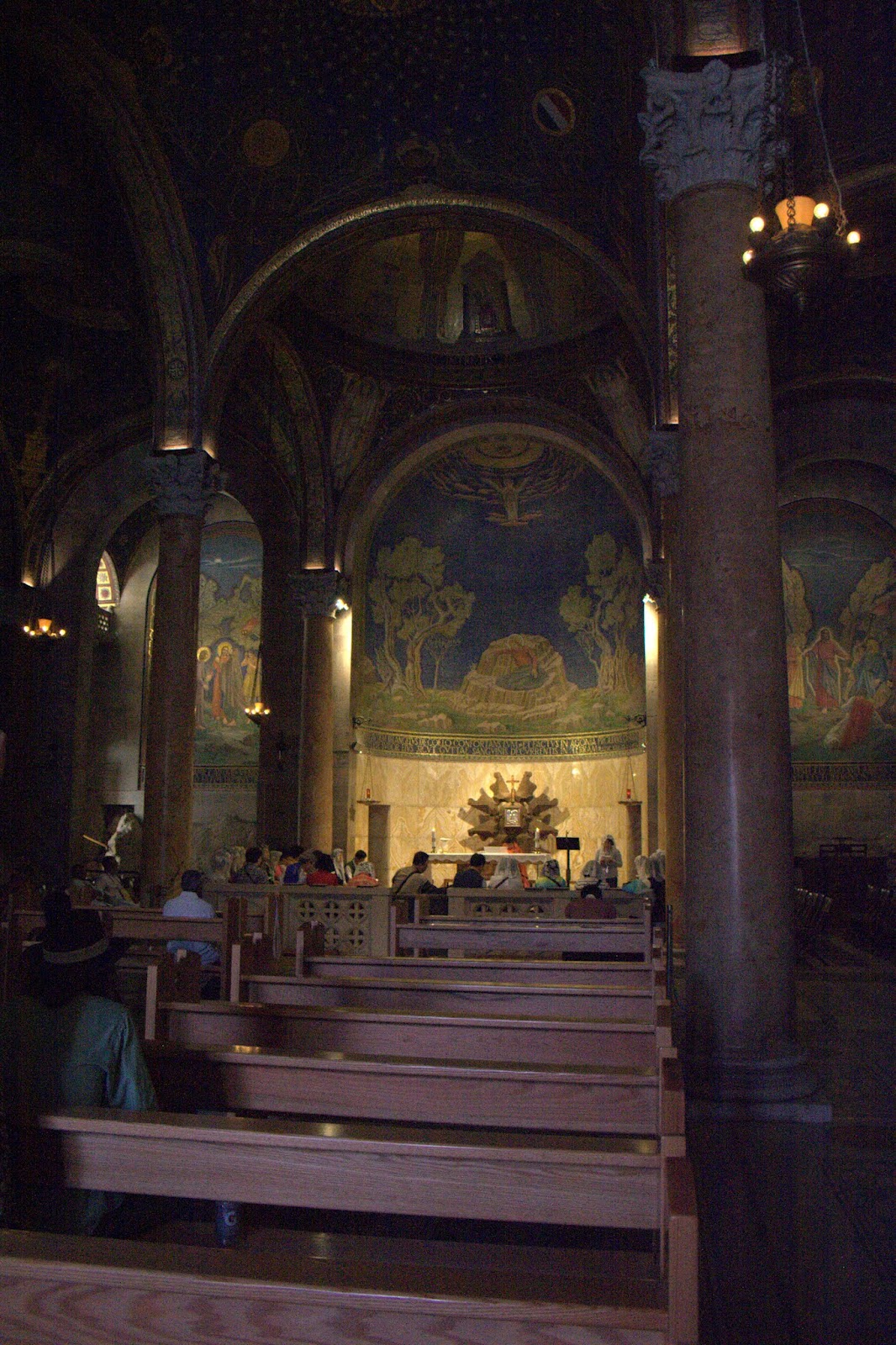 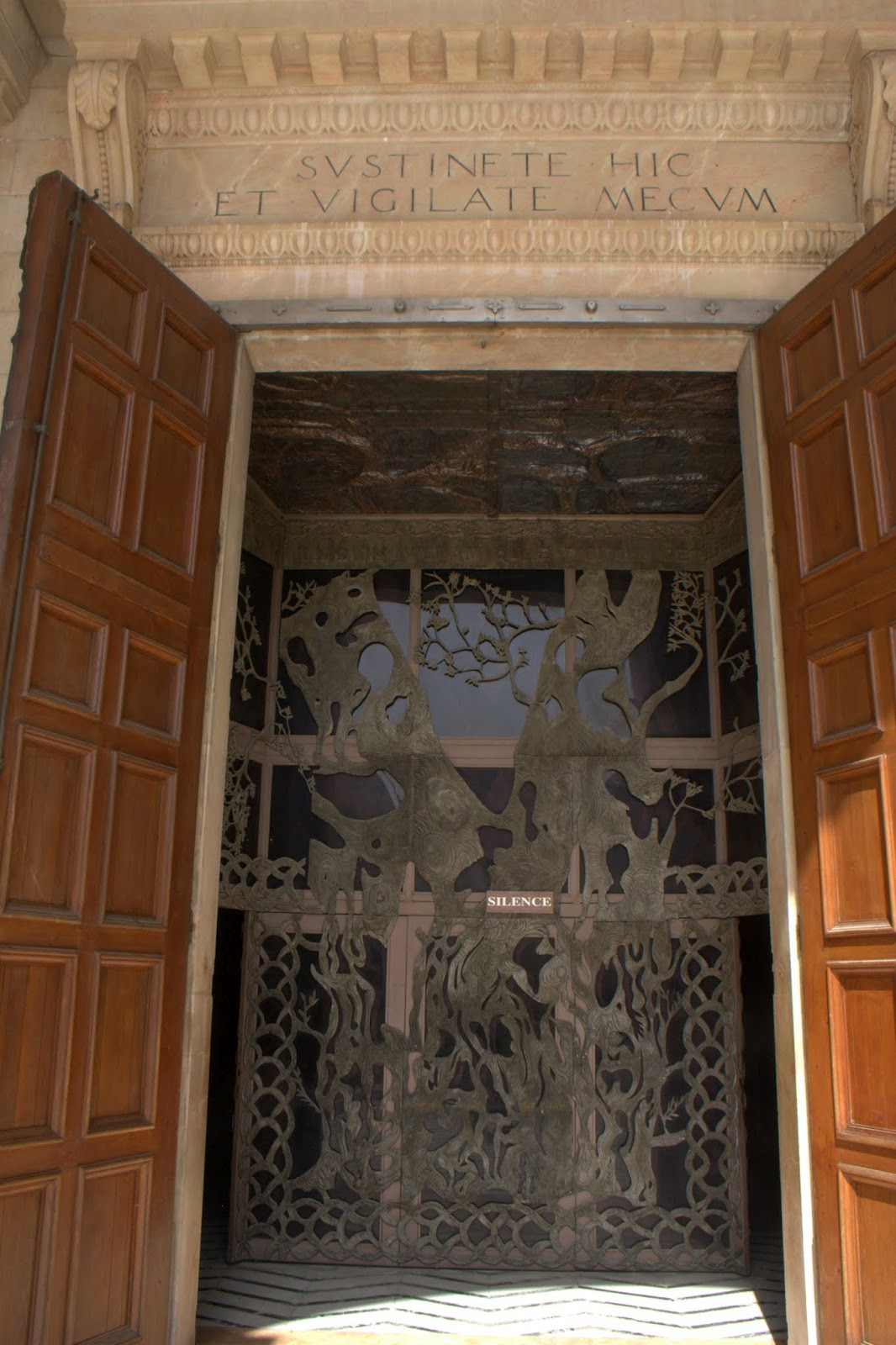 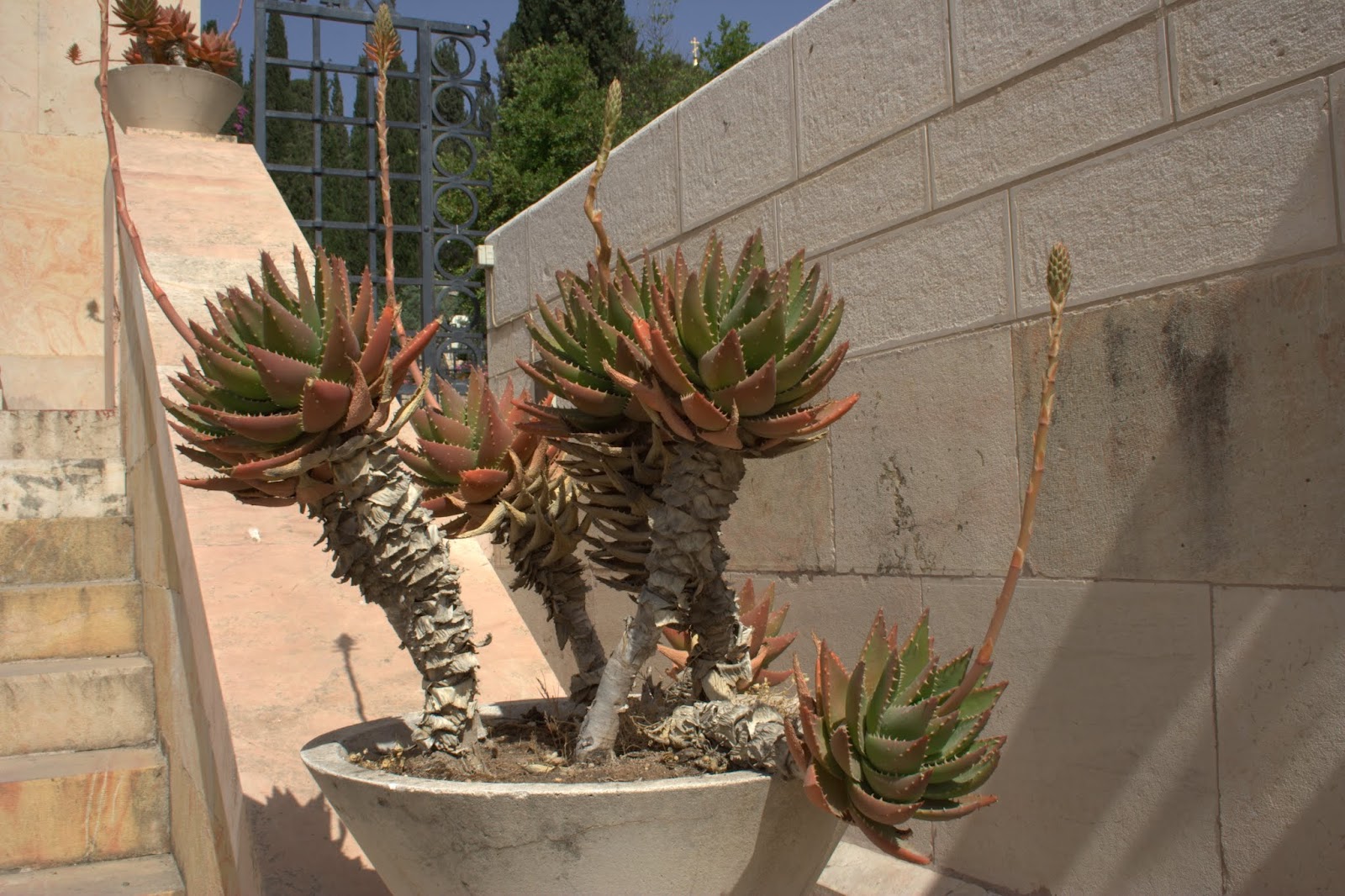 Last stop was Mary’s Tomb, the Orthodox Church of the Assumption of Mary. Frankly, it was dark and smelly, and not very interesting. The most interesting part was the huge number of lamps hanging from the ceiling. From afar we also saw the golden onion domes of the Church of Mary Magdalene, a Russian Orthodox church that was not open for viewing. 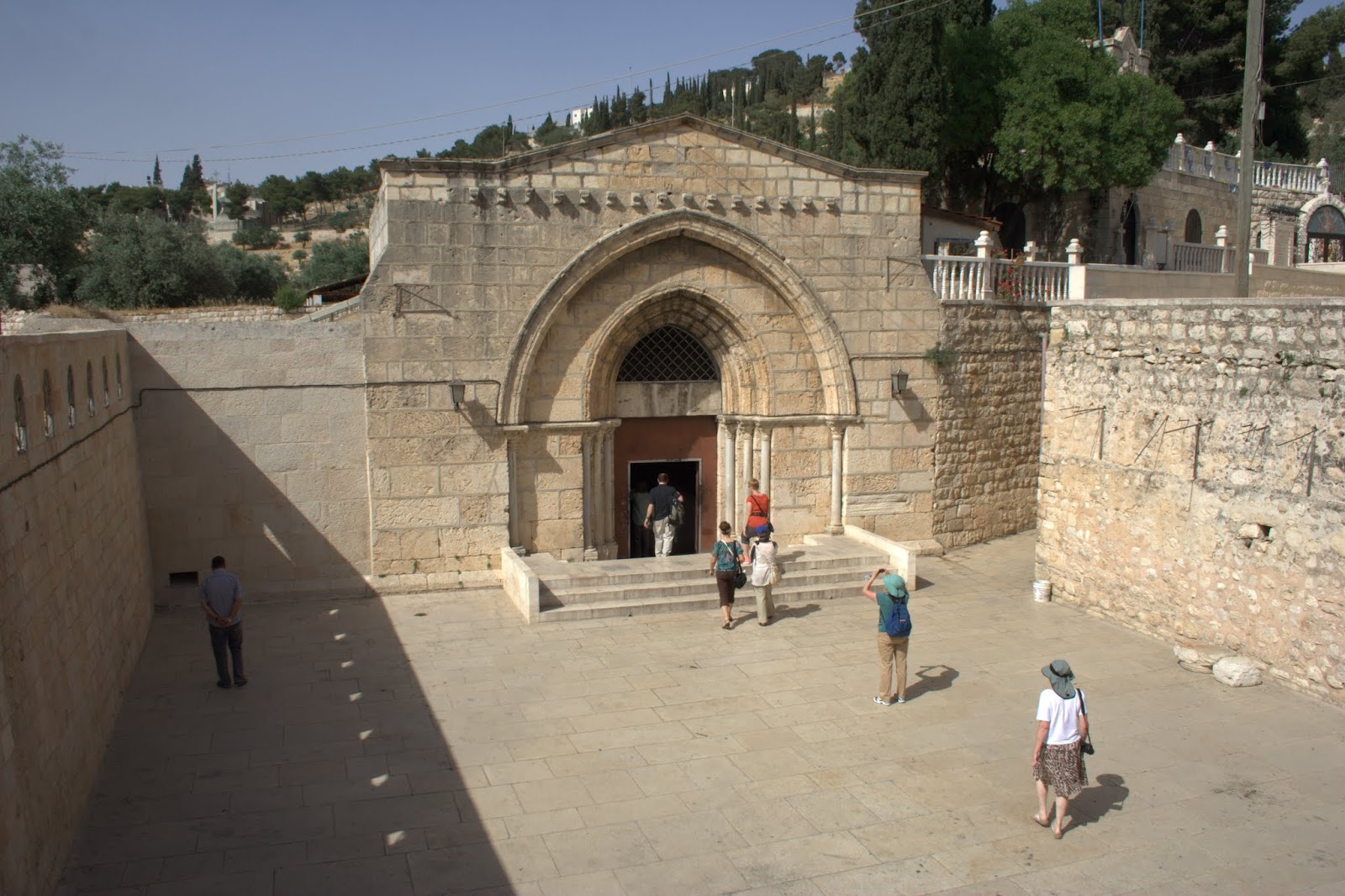 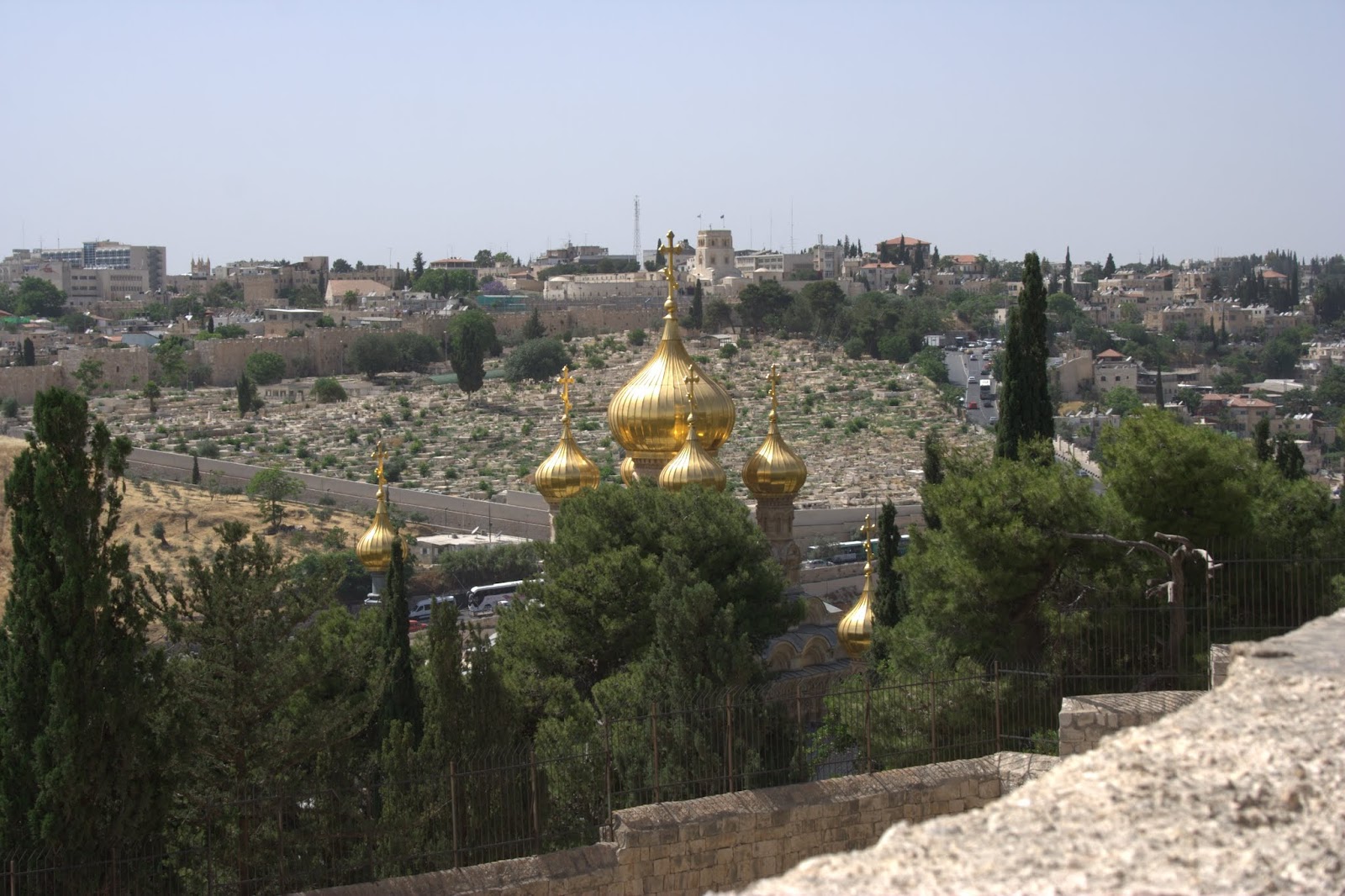 For anyone wishing to follow this route, be warned that it’s a very steep road with basically no sidewalk - wear shoes that won’t slip! After Mary’s Tomb, we split up, and I went with Craig and a couple of others to walk through more of the city. We walked back in to the Old City through the Lion’s Gate and walked through the Arab Quarter and out the Damascus Gate to an Arab neighborhood just outside the walls. Aside from the obviously new trams, this area looked like a normal city instead of the tiny winding cobblestone streets in the Old City. We visited an English-language bookshop that was like a tiny version of Barnes and Noble, complete with over-priced pastry counter, and then headed back to the hotel. It was bit surreal to sit in a virtual B&N (same smell, wood paneling, music) in the middle of the Arab part of Jerusalem. But at that point I would have been happy to sit anywhere, as long as I could sit! We got some Arab sweets on our way back (think “variations on baklava”) and had dinner at the hotel, as usual, thus ending another very full day. 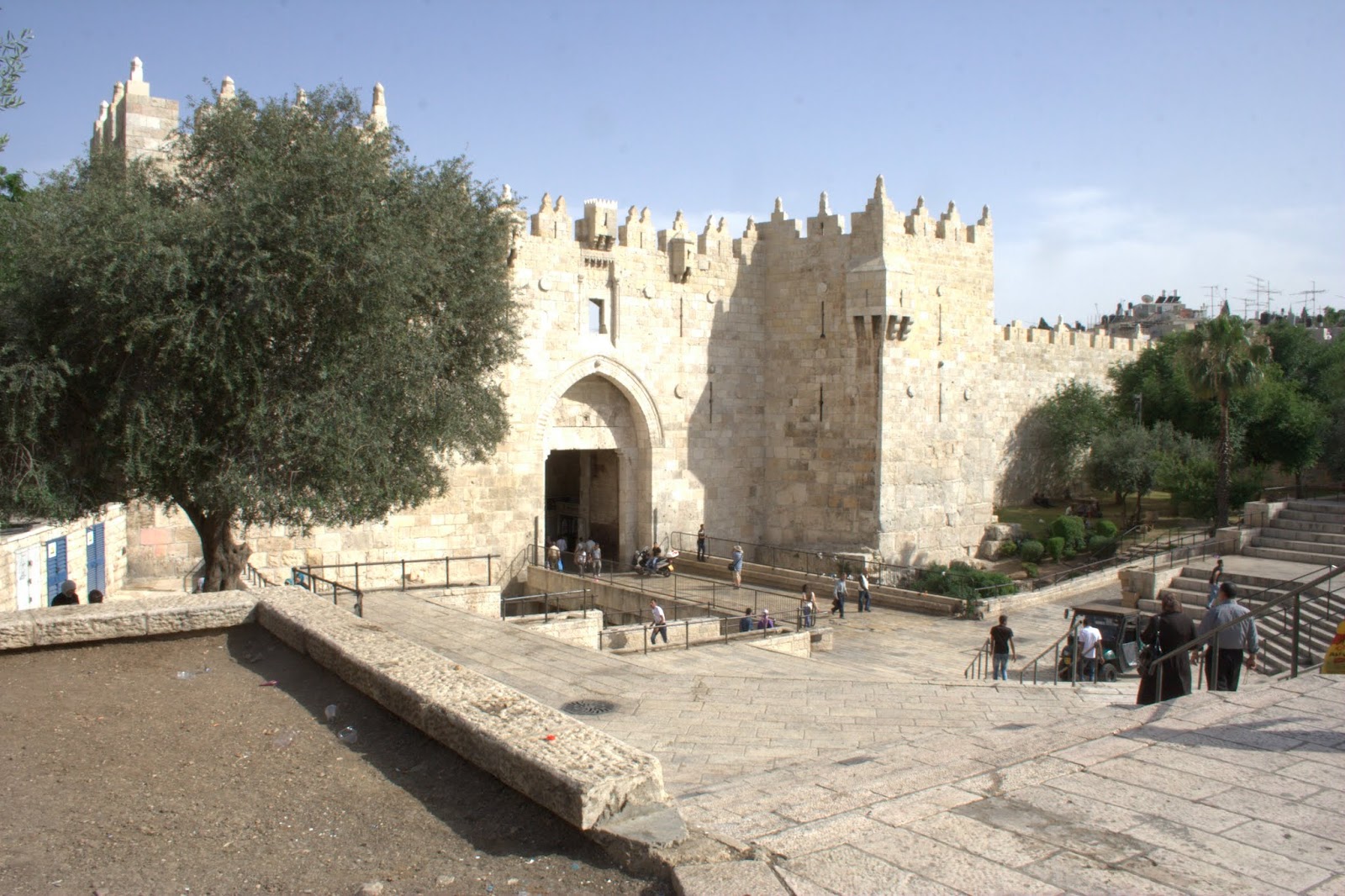