By now you’re probably thinking, “This series of posts is never going to end.” Well, at about this point in our trip, I was starting to think something similar; the emotional and physical toll of the trip was nearly overwhelming. Combine that with being sick, sometimes unsatisfactory food, and not much downtime, and you’ll approach what I was feeling by the mid-point of the second week! This isn’t to say that I was unhappy to be there; I was definitely still interested, grateful to be on the trip, and looking forward to our last days; but I was also completely exhausted. Visiting Jerusalem as a “justice tourist” (a term I’m still struggling with as a concept) is no vacation at all.

And yet, on Day 11 we rose extra early so we could be in line to visit the Temple Mount by 8:00 in the morning. Non-Muslims are only allowed on the Temple Mount twice a day during restricted visiting hours, partly for security reasons and partly so as not to interfere with daily prayers. (Orthodox Jews are not supposed to visit the Temple Mount ever, because they consider the entire site to be the possible location of the Holy-of-Holies of the Second Temple, and therefore too holy to enter.) After going through a long line and several stages of checkpoints, we were up, and could see the Al-Aqsa Mosque and the Dome of the Rock up close. We were not allowed to enter them, we just saw them from the outside. I was struck by the number of soldiers and police strolling the grounds with their automatic weapons slung about; two or three different kinds of guards - Jordanian, Palestinian, special Temple Mount guards - were present, all in different uniforms. Access has been restricted since the visit of Ariel Sharon in 2000, which sparked the Second Intifada. I wish we could have gone inside; the exterior of the Dome of the Rock is beautiful, but the inside is too. Maybe some day! 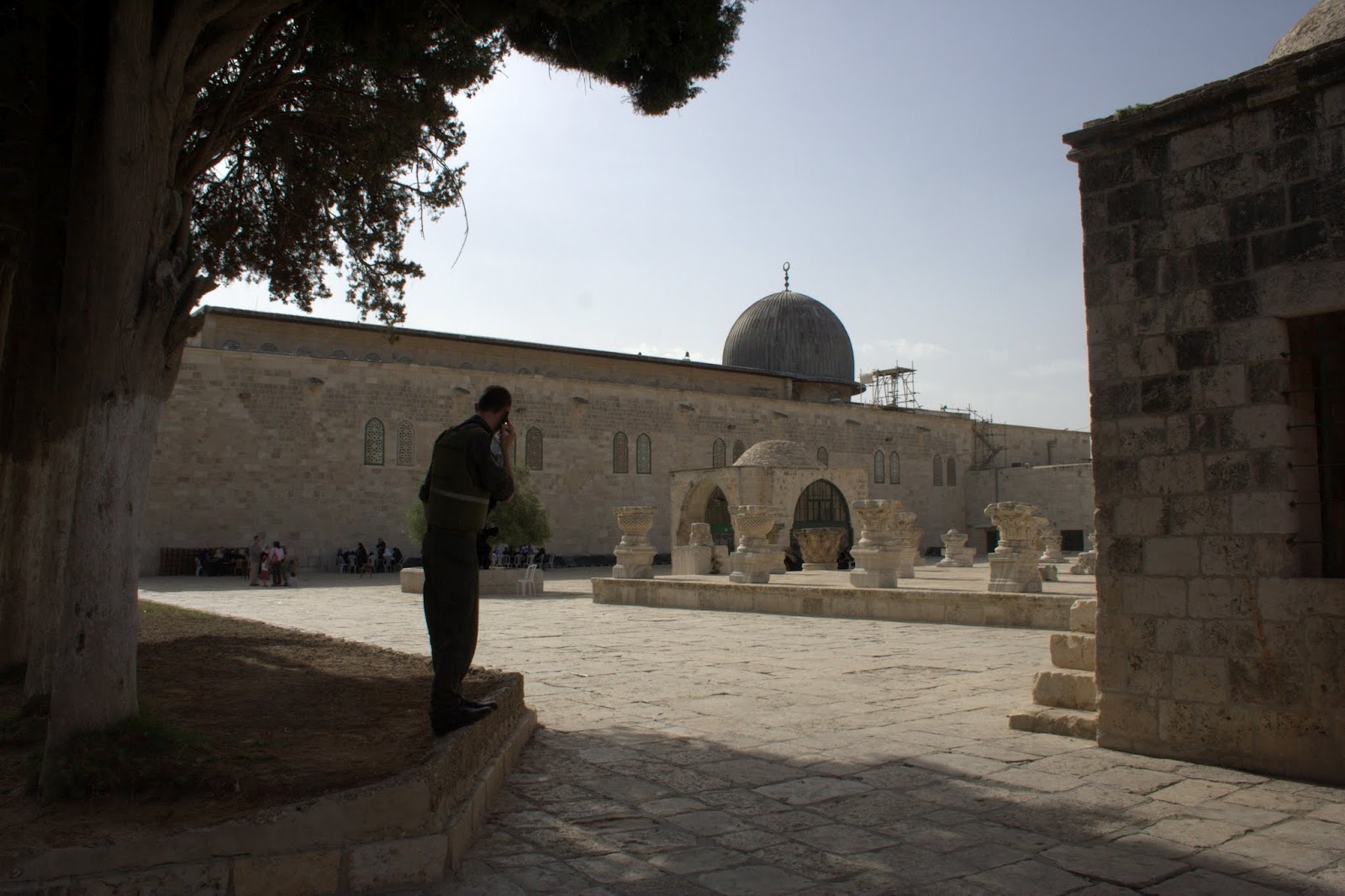 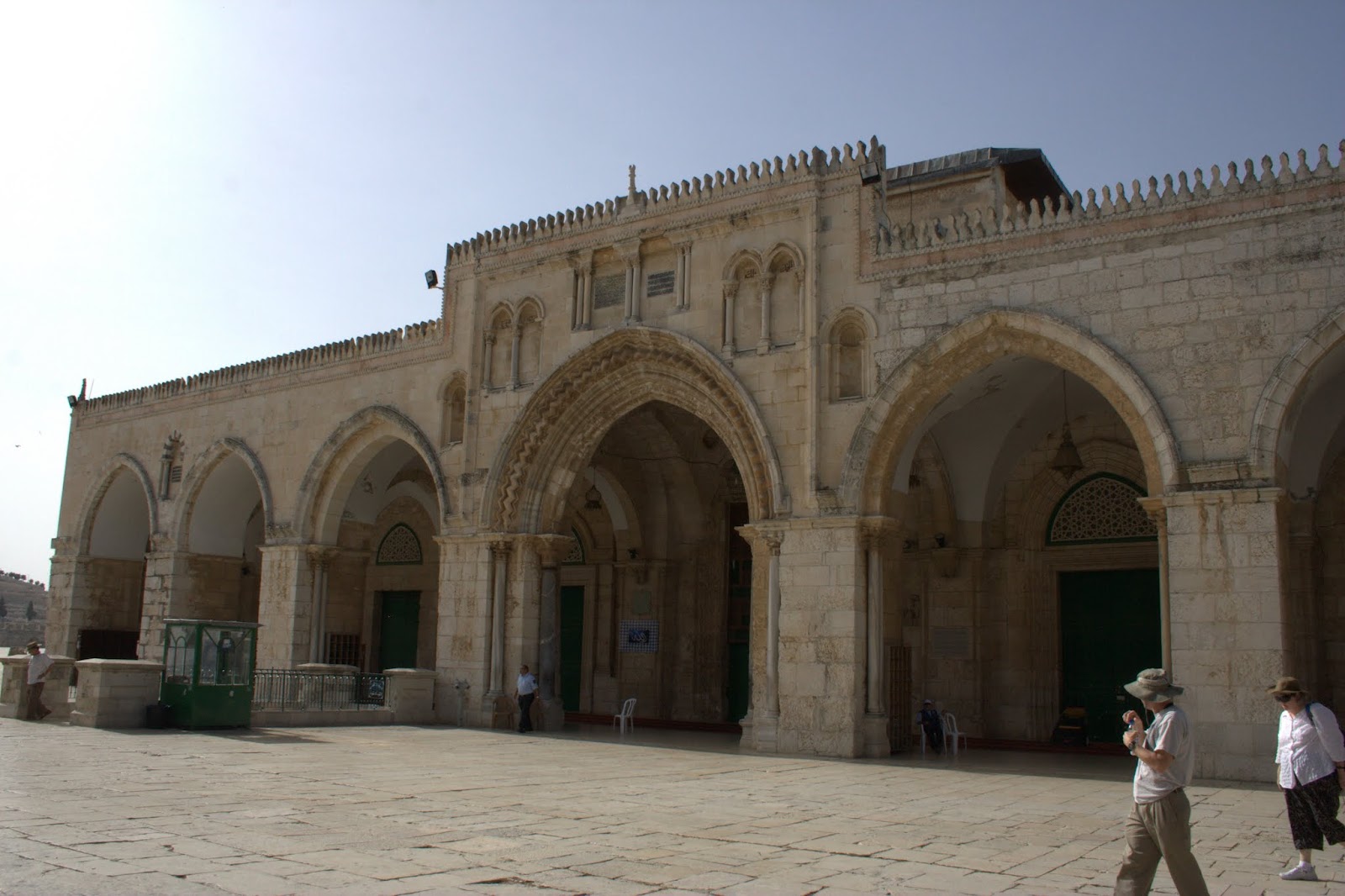 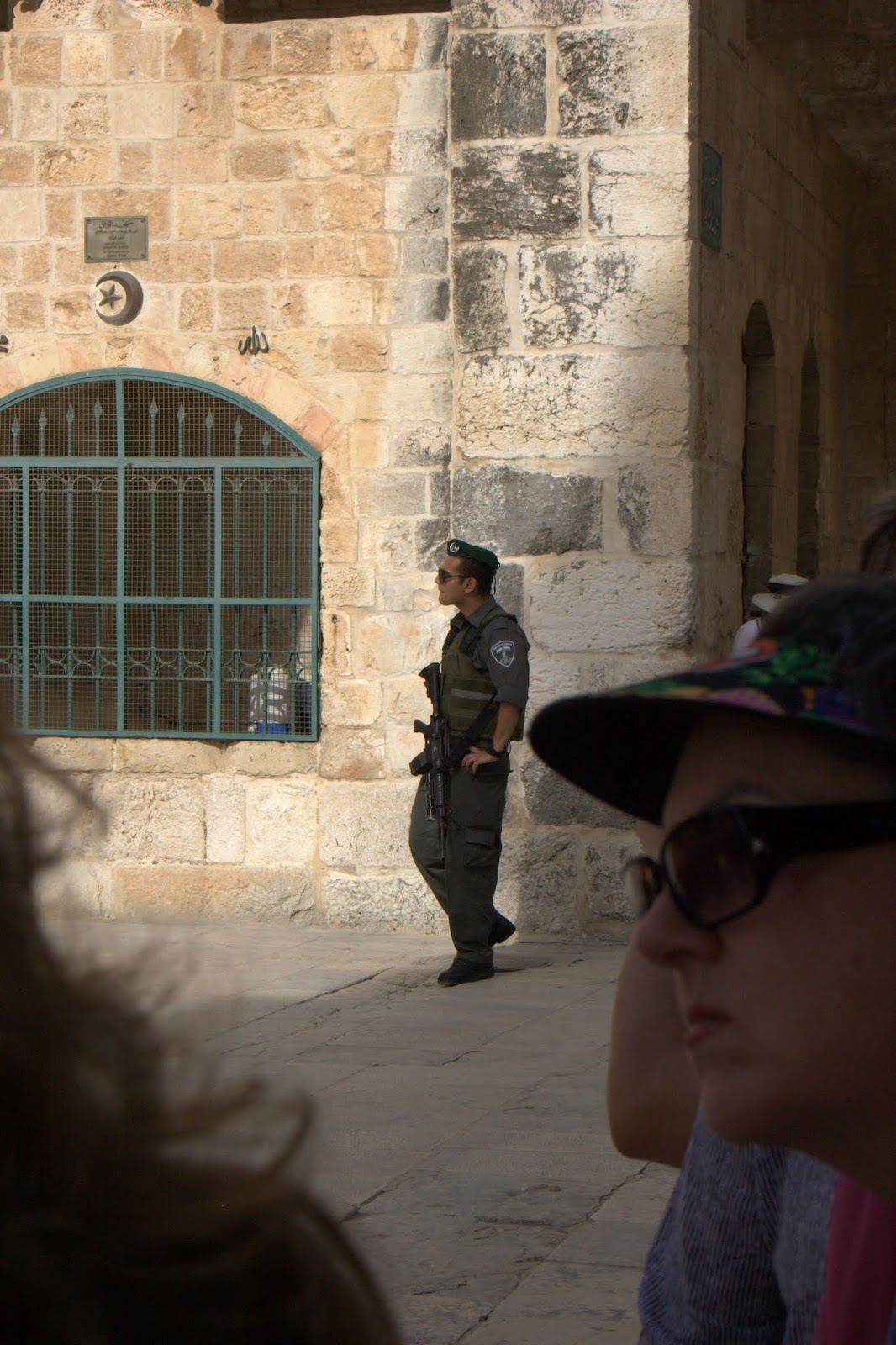 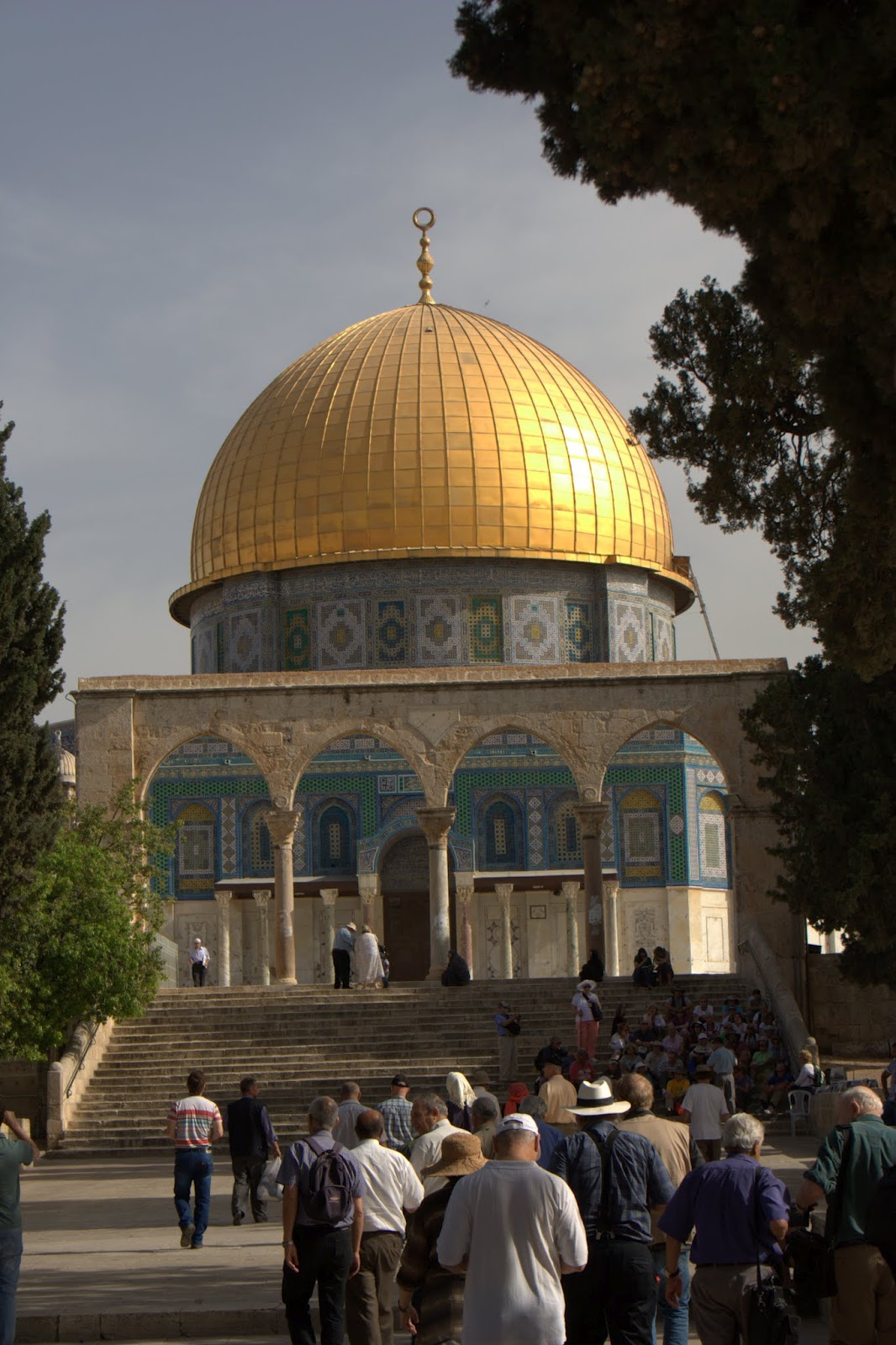 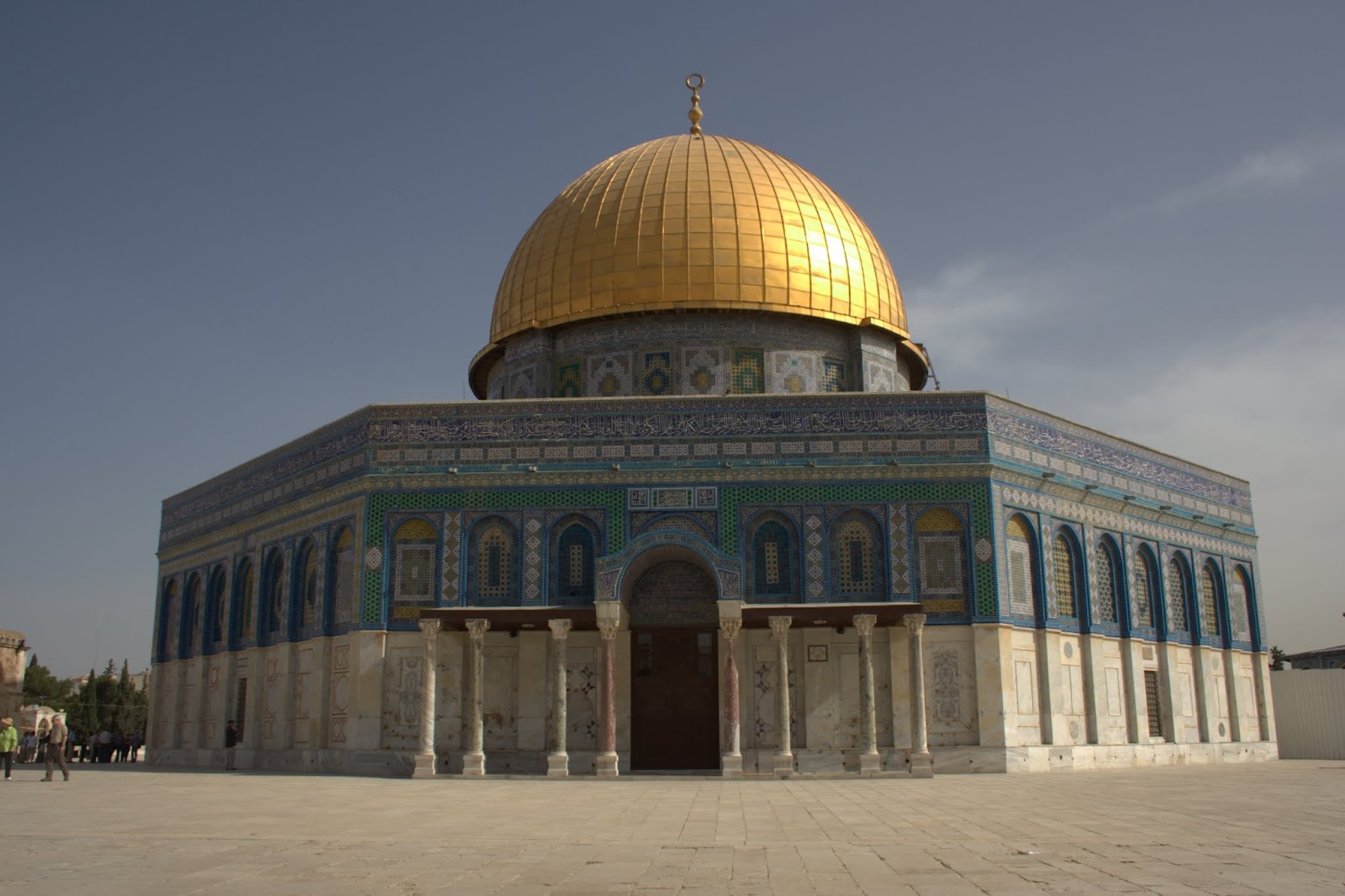 After our visit to the Temple Mount, we left through the Arab Quarter to begin our tour of the Via Dolorosa. This seemed somehow appropriate to those of us, like me, who were exhausted from our travels. The famous Via Dolorosa is both a real street in Jerusalem and a series of commemorative churches/sites, one for each of the fourteen “stations” (events) of Jesus' walk to his crucifixion. These sites range from full-fledged churches to little chapels to (literally) holes in the wall with barely a plaque. I wasn’t able to keep track of all the fourteen spots, some of which I had never heard of, so you can read about it online if you’re interested. The actual street is just an ordinary street, full of vendors, people, security cameras… 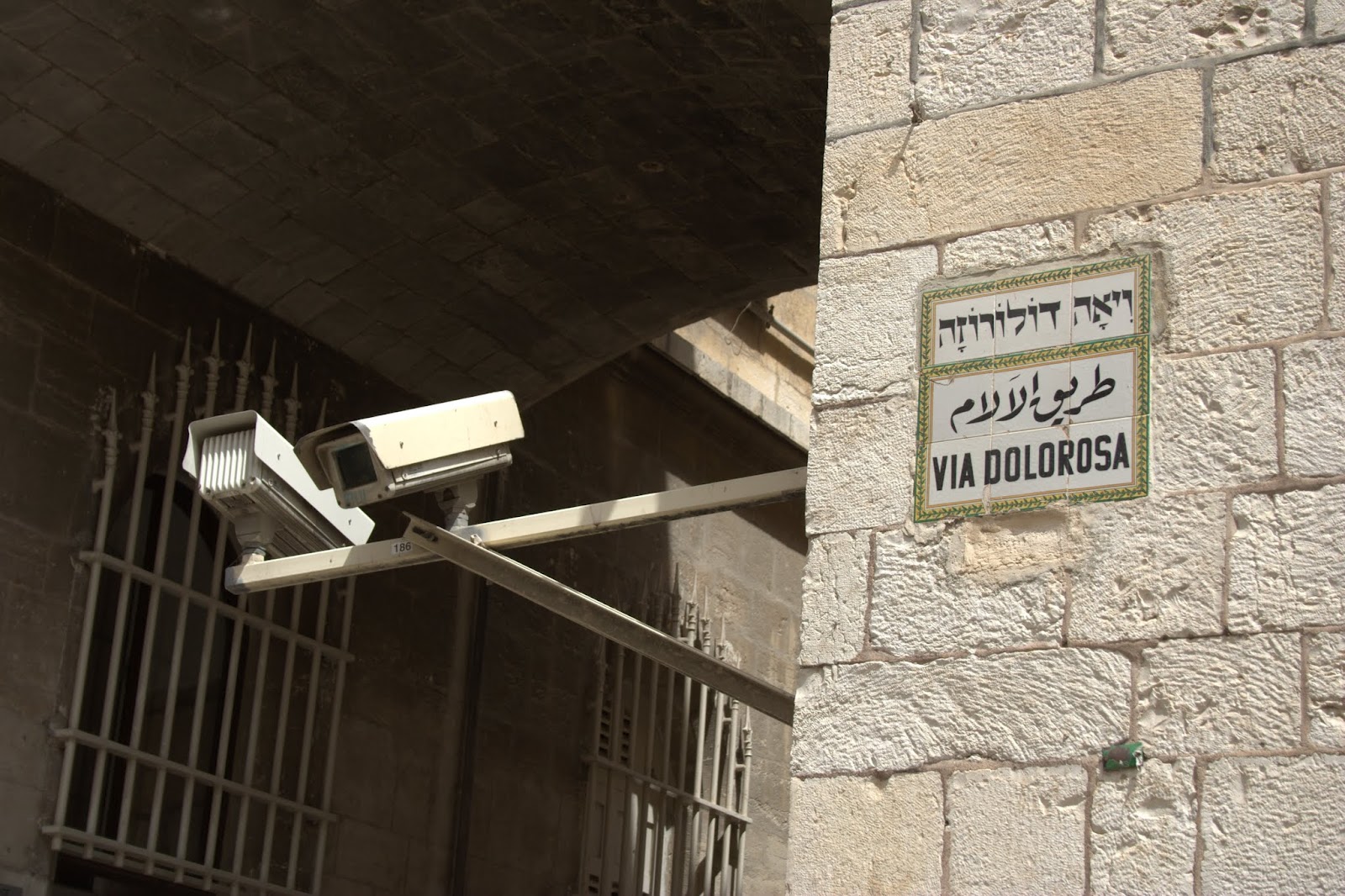 We began at the Church of St. Anne, considered to be the birthplace of the Virgin Mary; this church is controlled by the French, and has amazing acoustics! Nearby are the ruins of ancient cisterns, considered to be where Jesus healed the crippled man who waited by the water. 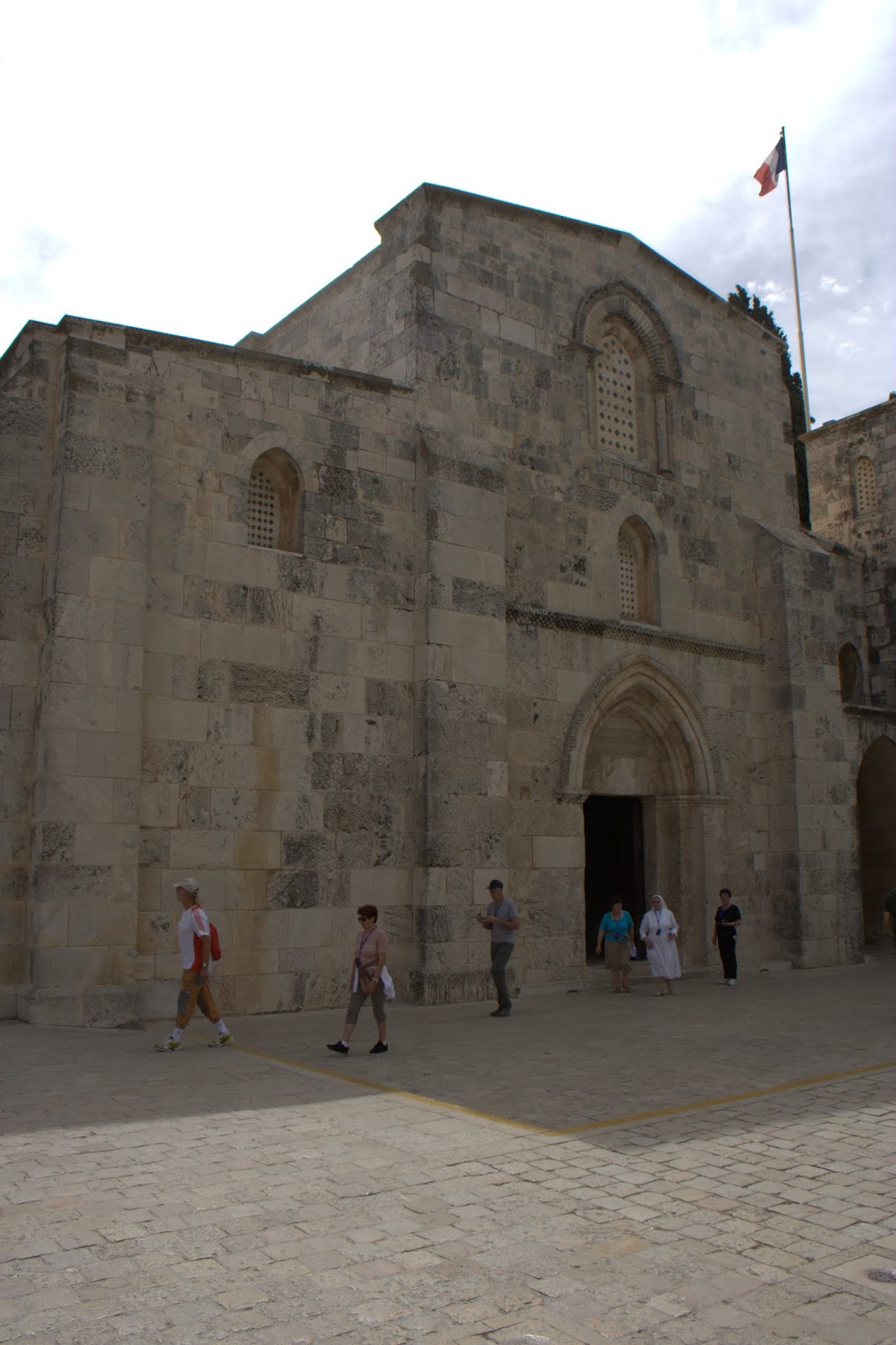 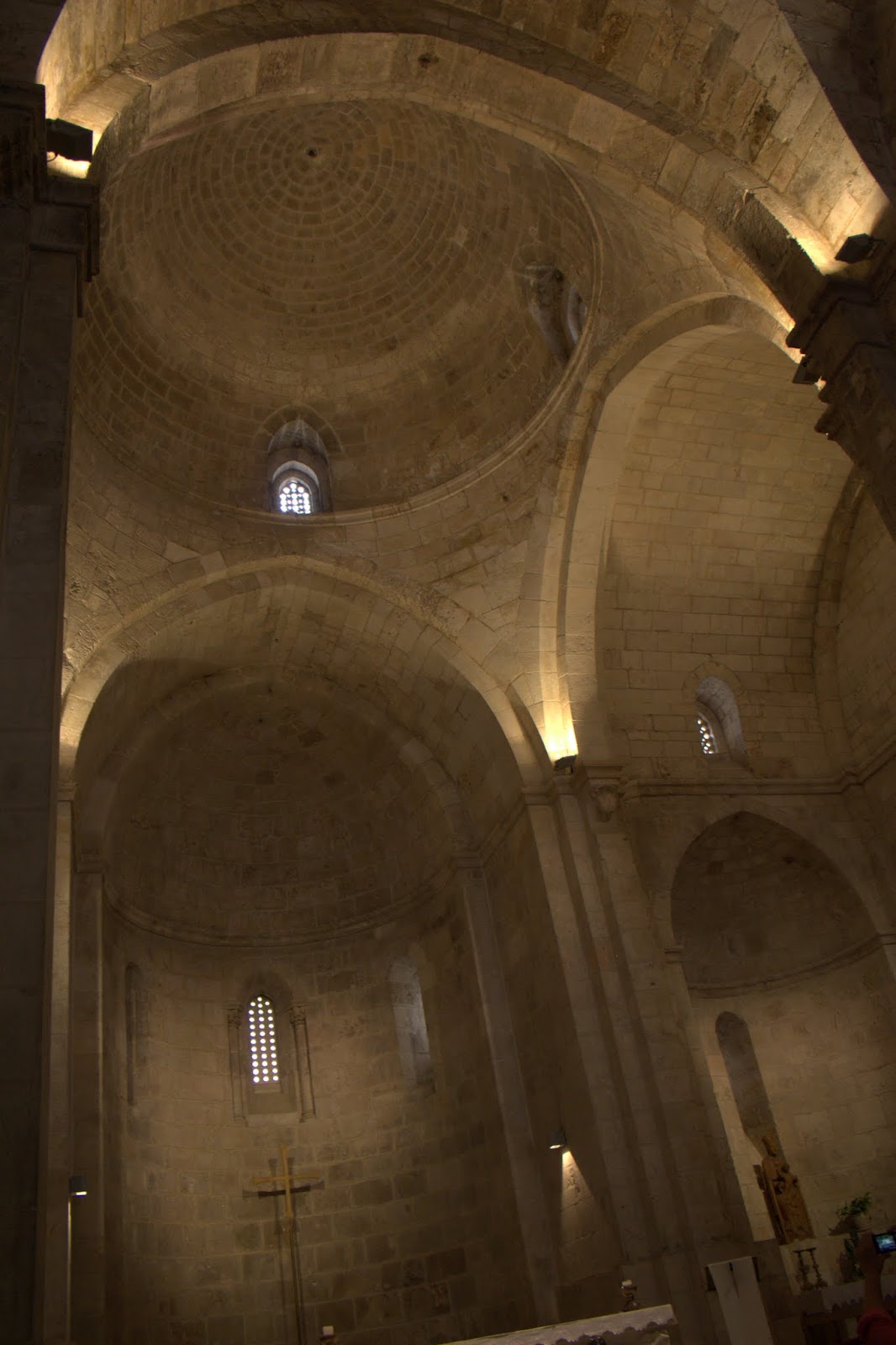 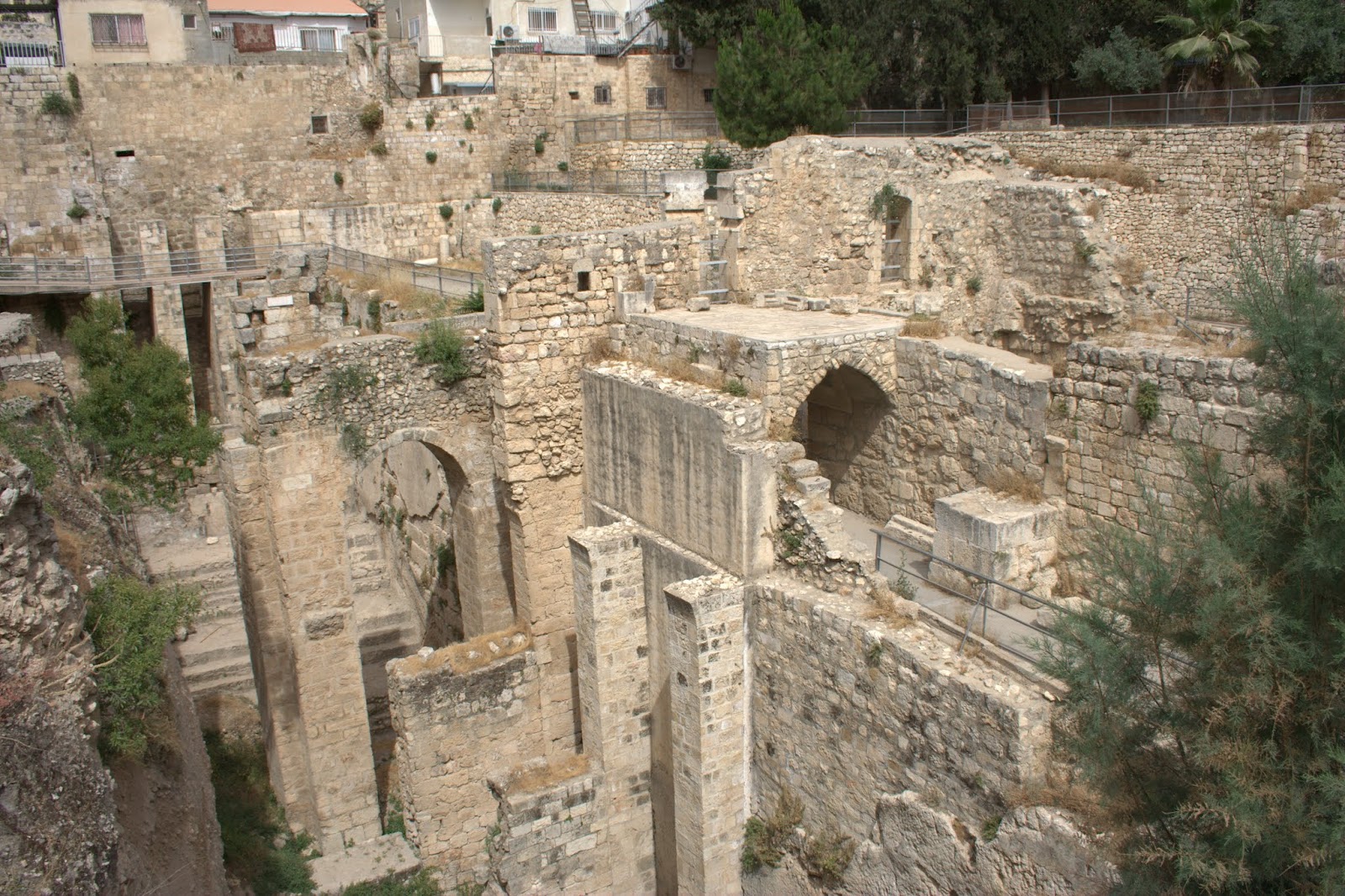 After that was the Church of the Flagellation, another Barluzzi church with an amazing mosaic in the dome, in the shape of the crown of thorns. Many of the other stops sort of ran together in my mind until we reached the end. 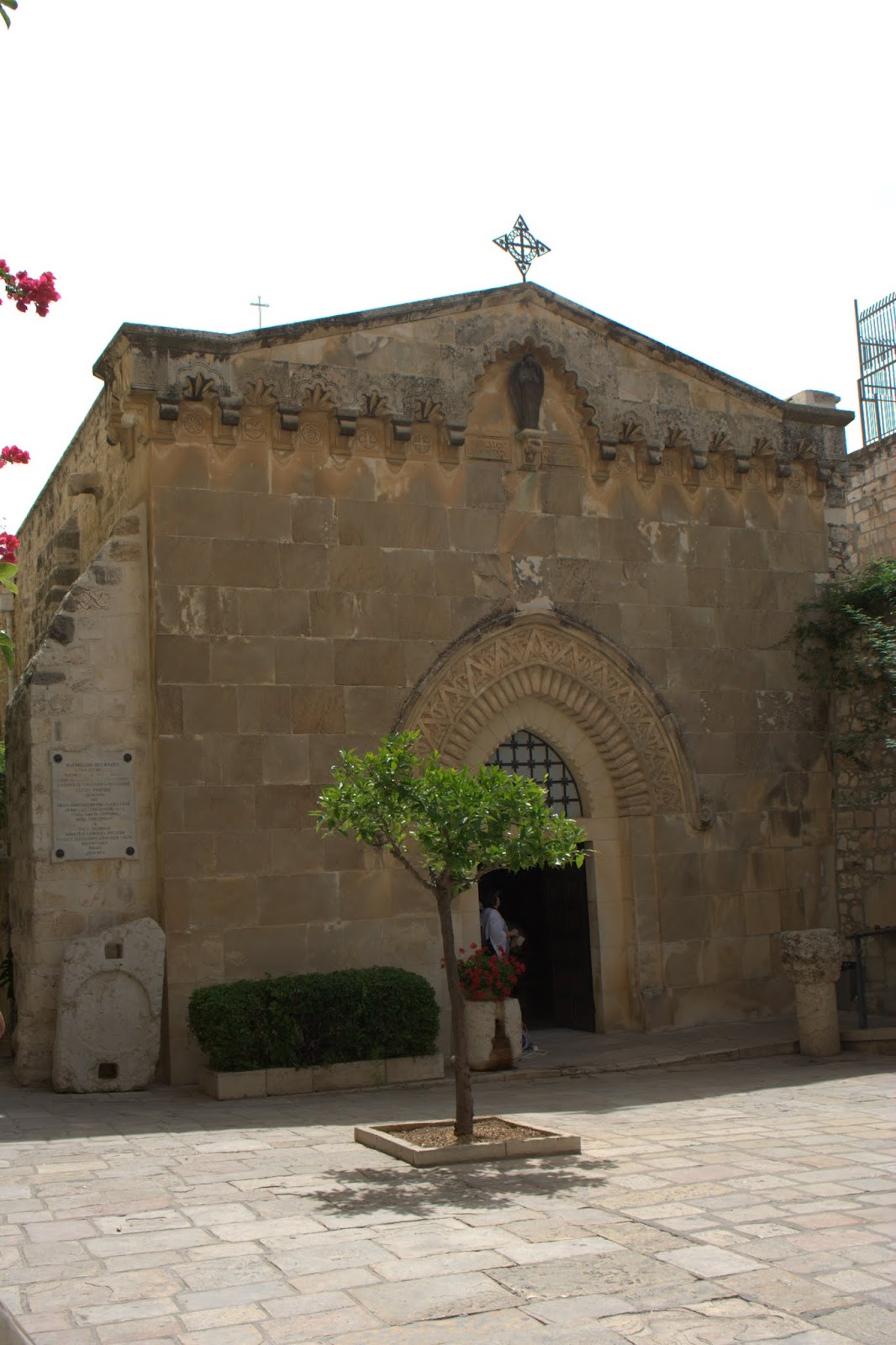 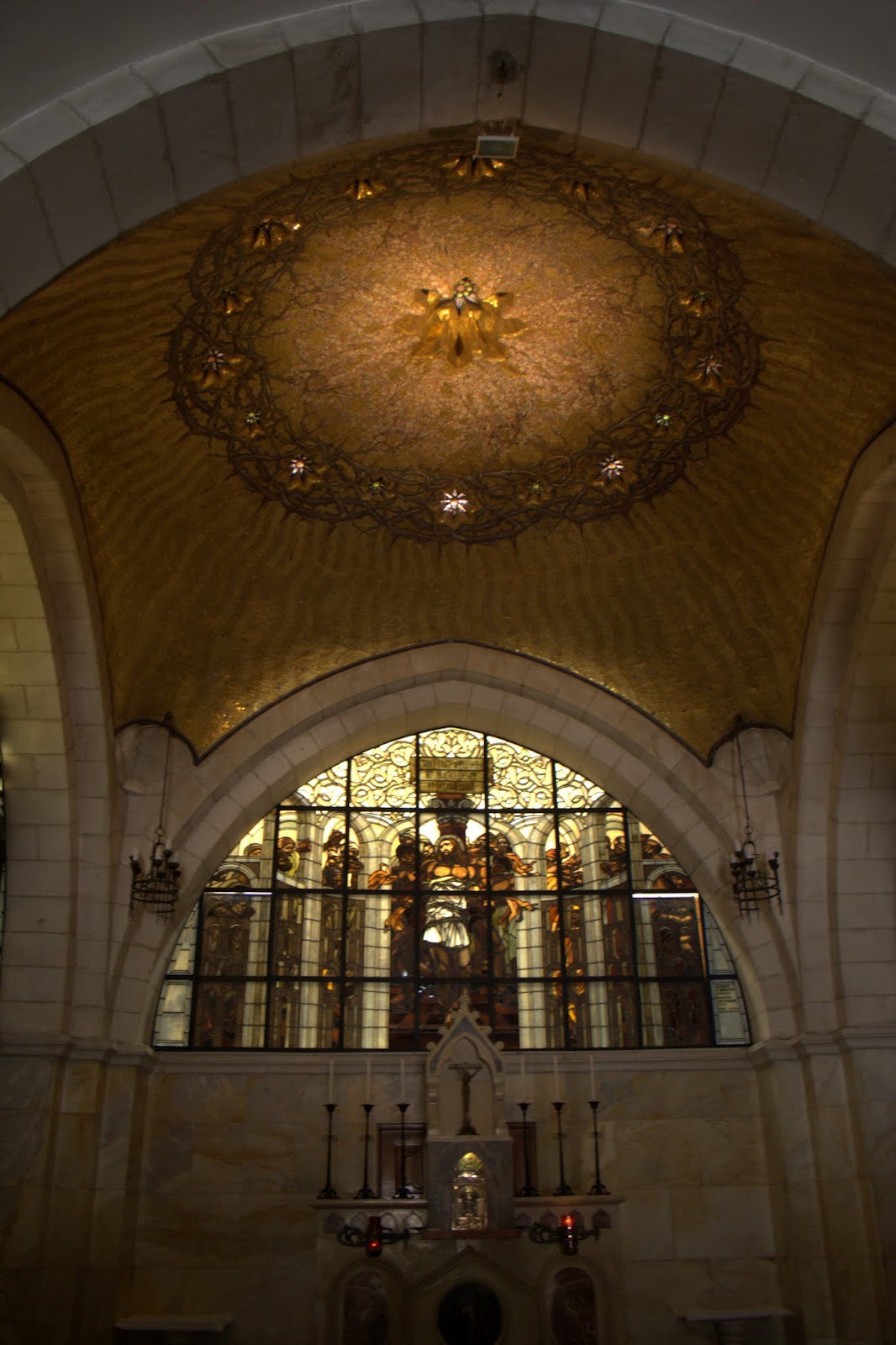 The final set of stations are inside the Church of the Holy Sepulchre, considered to be the holiest site in Christianity. The church was bigger than I expected, even more confusing than I suspected, and compared to the solemn Muslim site we had visited earlier in the day, disappointingly full of people waving umbrellas, shouting, and pushing. The different Christian groups (Orthodox, Catholic, etc) have divided up the interior into weird levels and areas so each can have their section. I was mostly unimpressed. We waited in the line behind the police barricades to take our 1-minute turn inside the Tomb, which is like a mini-church inside the bigger church. When we had some time afterward to wander around, I saw the priest there having to re-arrange the police barriers since the crowds had subsided. What a job! Nothing in the church looked especially old or especially interesting; I was most struck by the awkwardly-placed steel support scaffolding on the tomb. Compared to visiting the Temple Mount, it was disappointing. 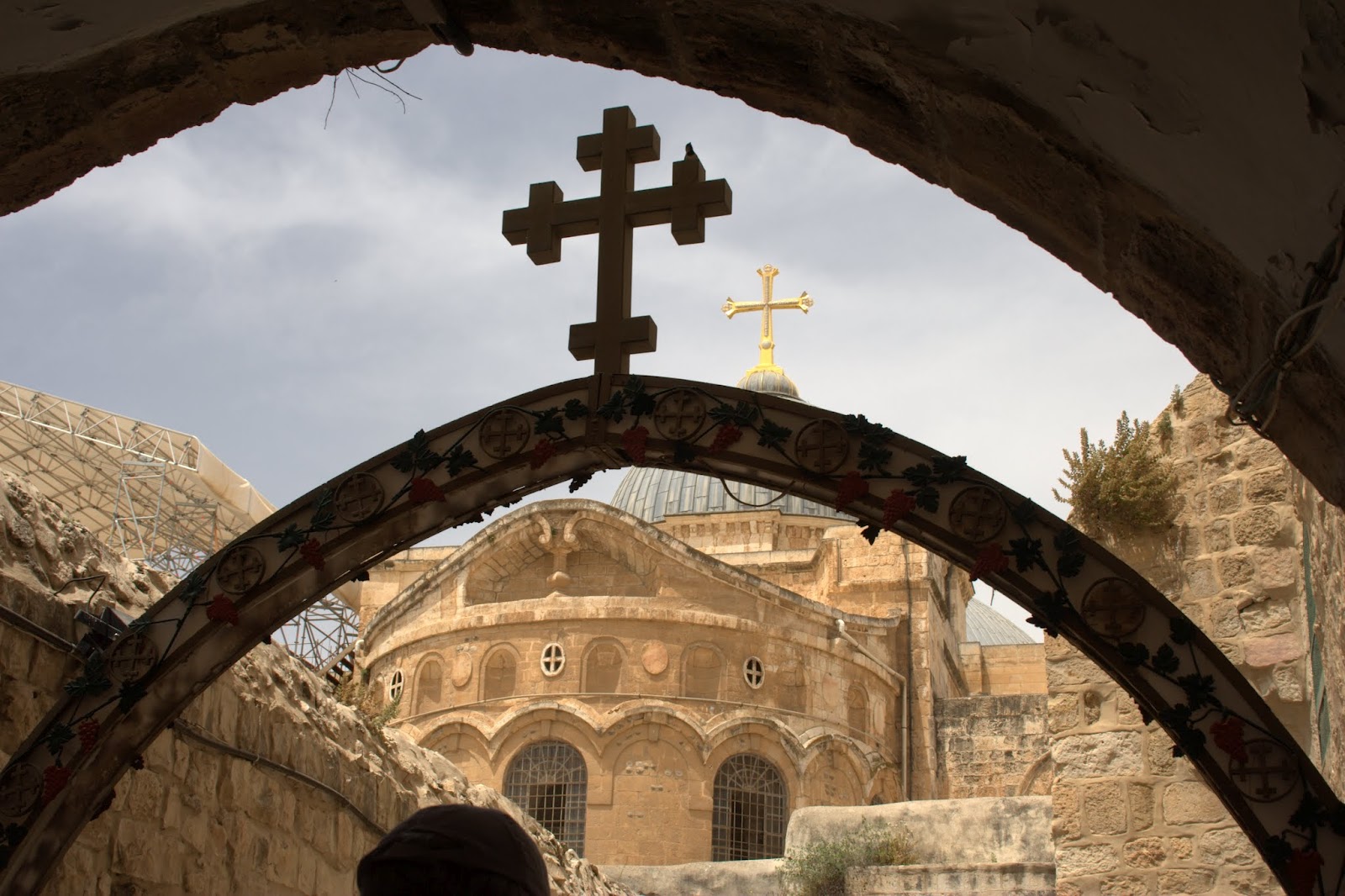 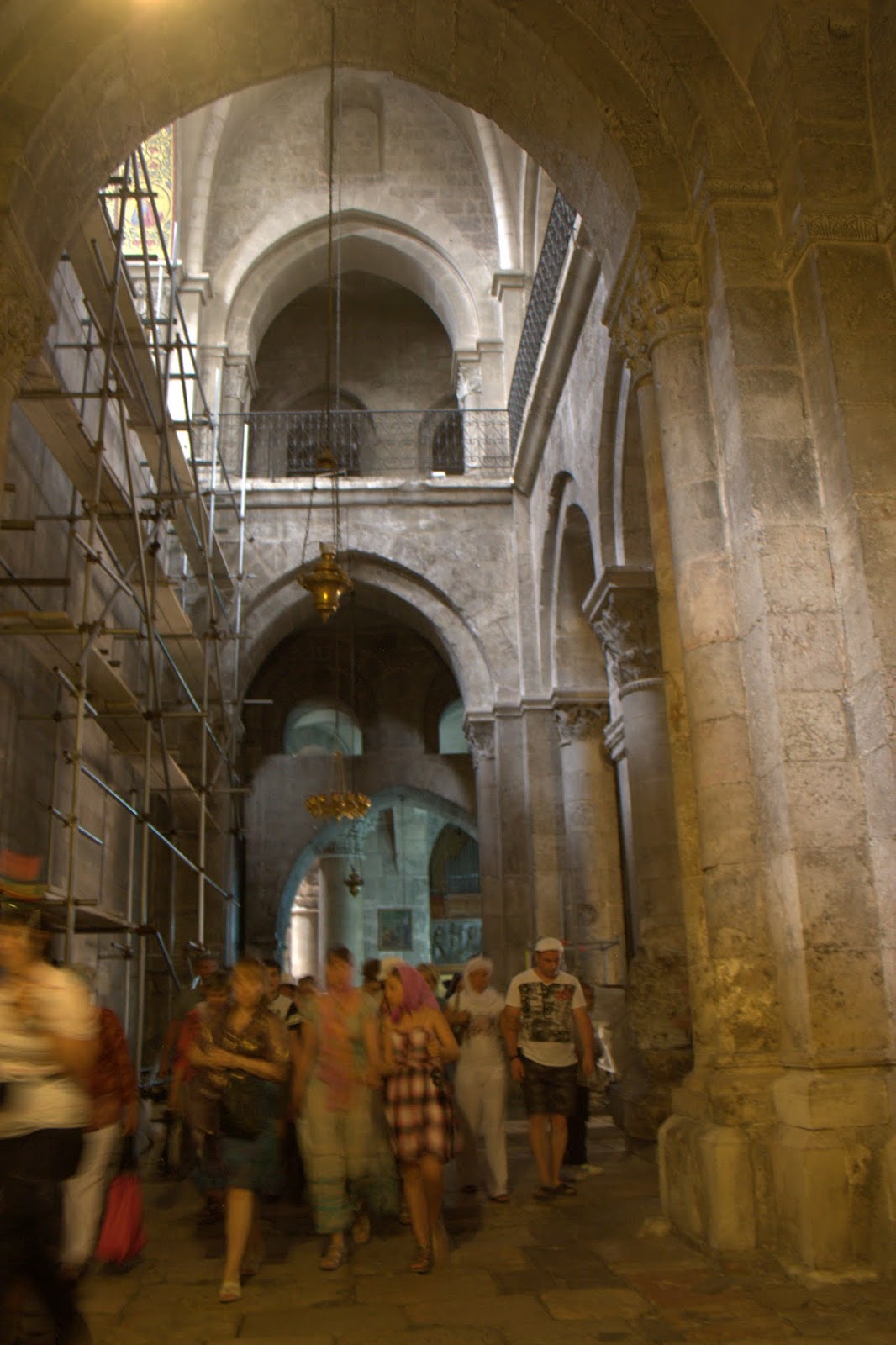 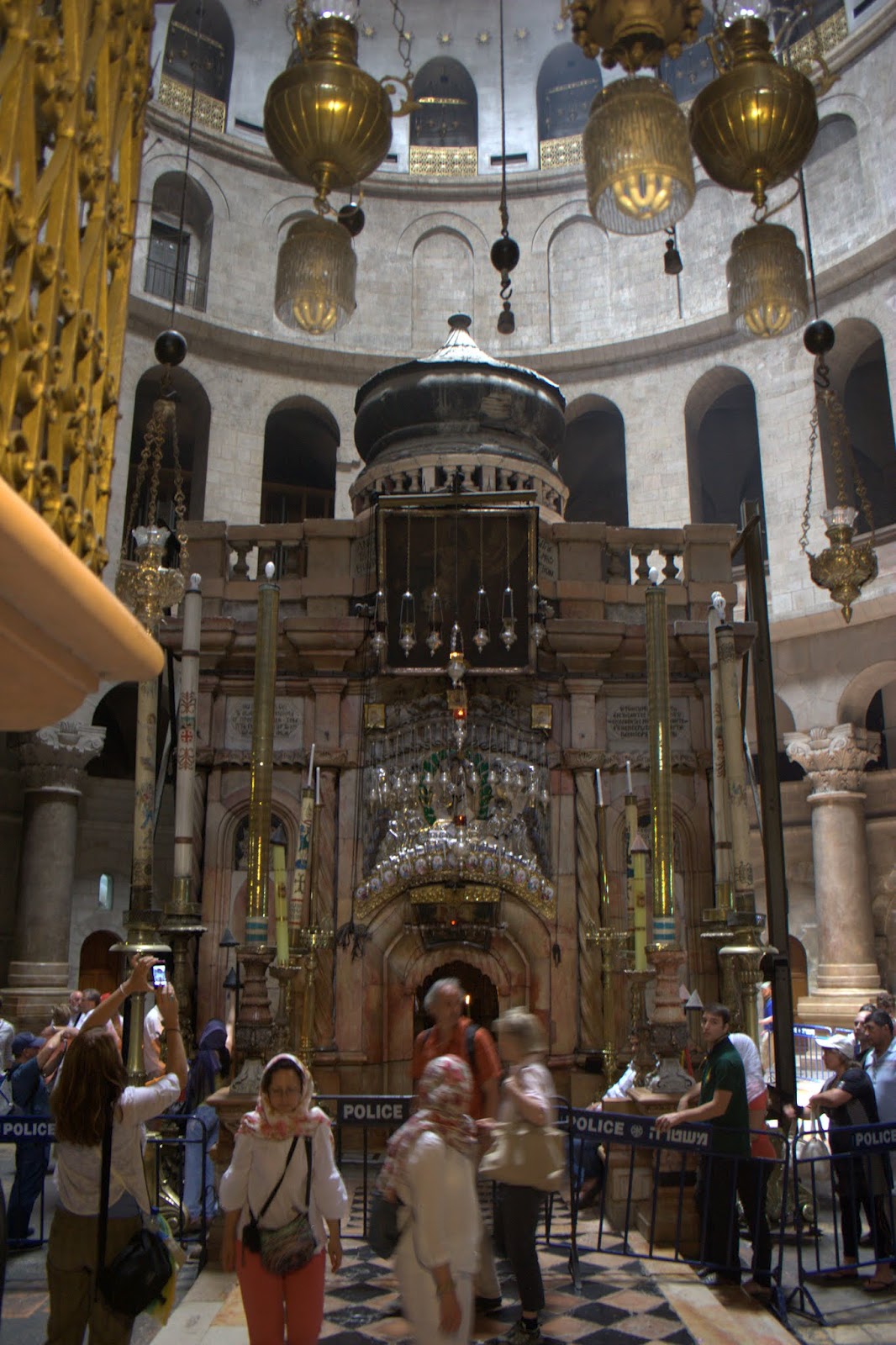 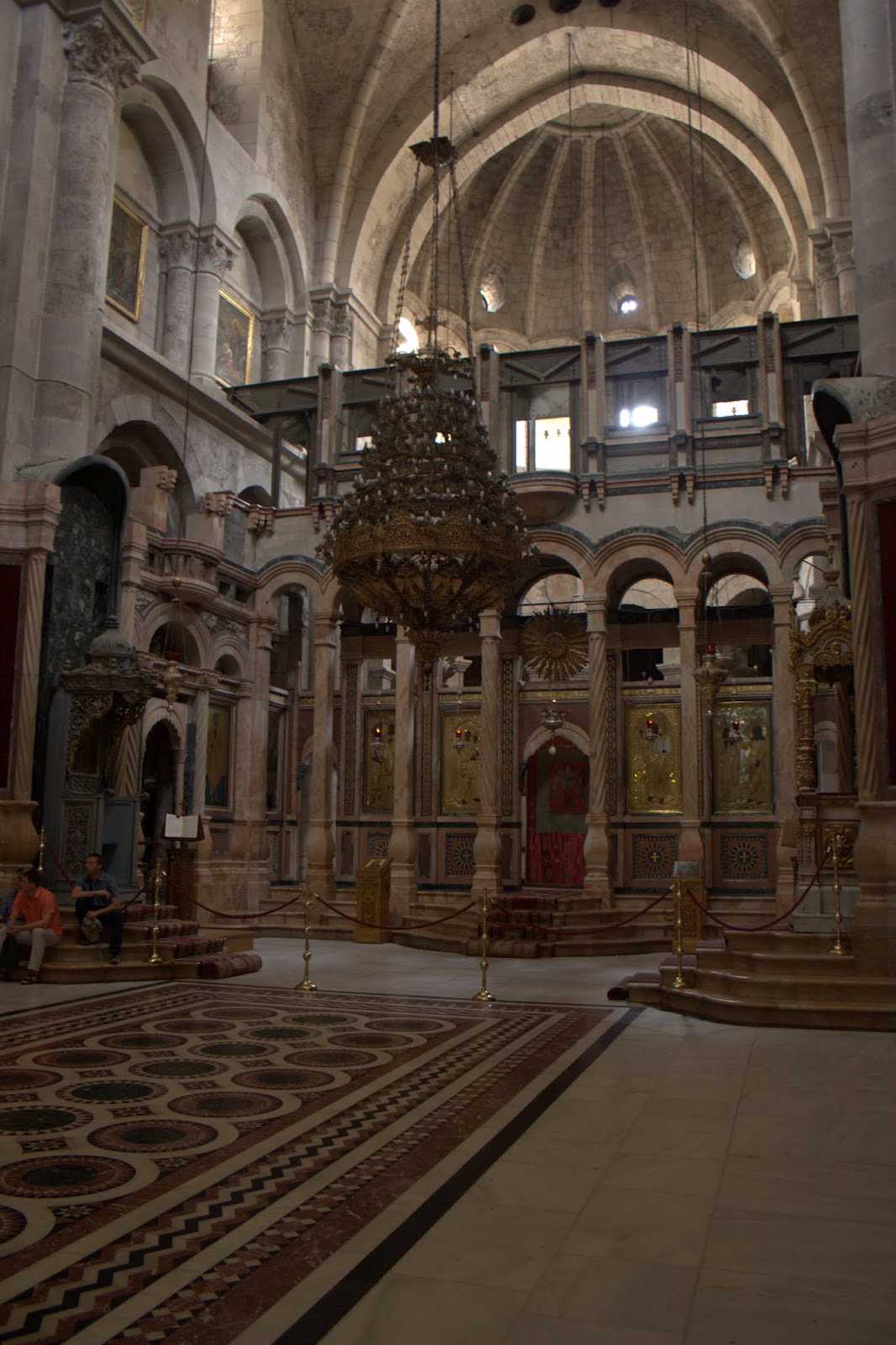 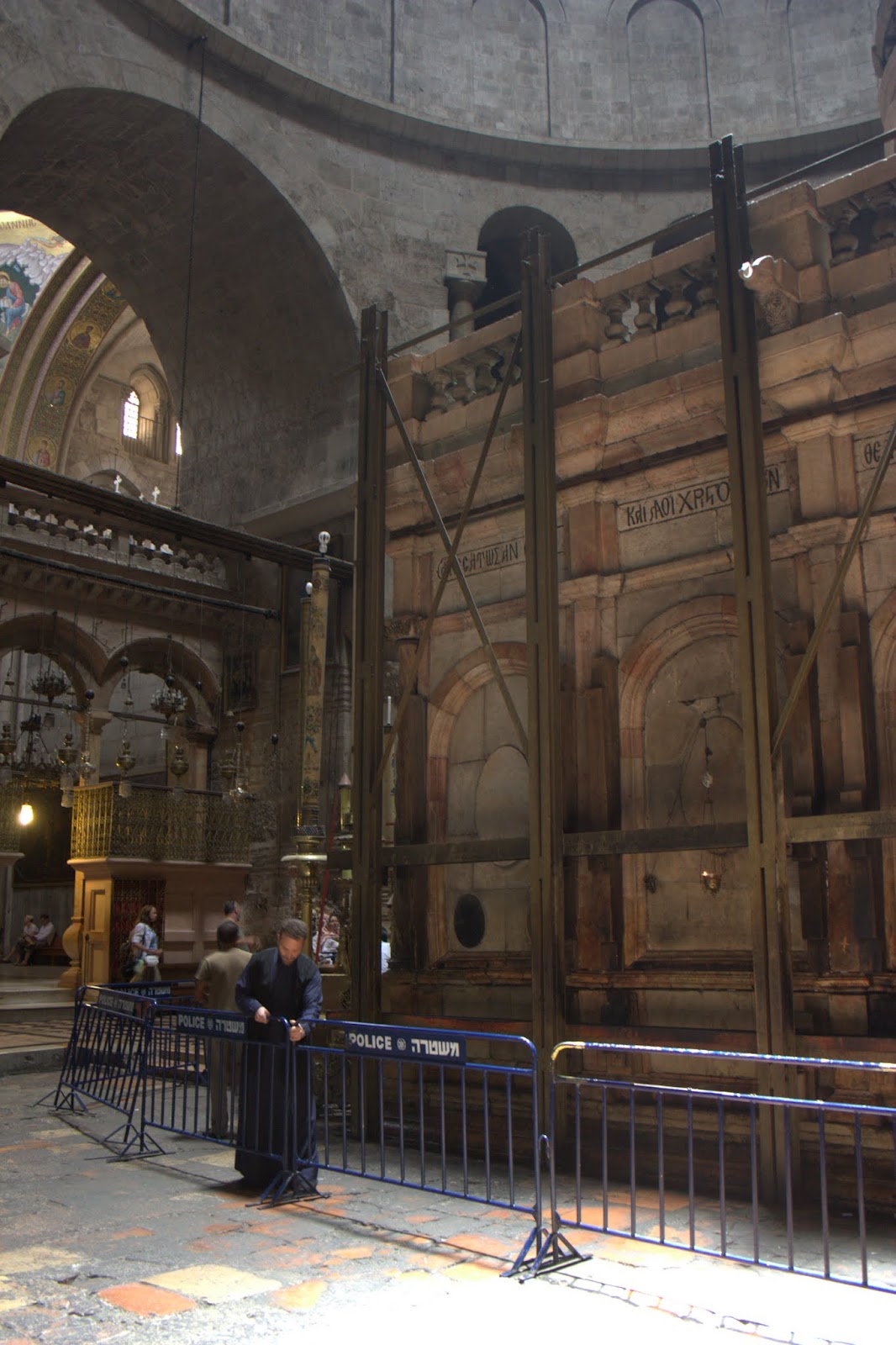 From there we had lunch and then some much-appreciated free time, in which we took our clothes to the one laundry place we could locate in the old city. This was a ridiculous outfit of one washer and one dryer operated by a tour/hostel company. The staff told us to leave our clothes and they would have it ready in 5 hours. We returned that night, to find the five or so men there in an uproar, since someone had failed to wash and/or dry my clothing (it was unclear exactly what happened). They ended up asking me to come back in the morning, and gave me my wash for free. Inconvenient, but hey, no complaints in the end since it was free! My trip roommate & I then wandered through the souk looking for gifts for her family. I acted as backup for her haggling adventures, since I’m generally too scared to haggle and didn’t need to buy anything anyway. We were mildly heckled by the (generally very young) storekeepers, with phrases like, “Would you a like a special gift? Here, take my brother!” Thankfully, we must have looked young and broke enough to avoid being hassled much, since some of our other trip members reported very different reactions. Quite an interesting day!