The Israeli/Palestinian conflict isn’t talked about much in the US, except to say general things about how complicated and difficult it is to reach peace in the Middle East. Before this trip I did a lot of reading about the architecture and planning parts of the conflict: that Israel’s planning, zoning, and construction policies in the occupied territories make it nearly impossible for Palestinians to build on their own land, while the state has multiple methods of confiscating land for state use, which in turn makes it easy for Israeli settlers to build (illegal) settlements on this land. This process contributes to overcrowding, unrest, and unsafe conditions in the Palestinian cities, aside from violating human rights and international conventions. Palestinians become trapped in cycles of “illegal” building (building without a permit, since permits are purposely difficult to obtain) and home demolition by the authorities who want to punish this building, while Israeli settlements in the occupied territories, considered illegal under international law and in violation of the Geneva Conventions and many other laws, continue to be legitimated and subsidized by the Israeli government. (For statistics and official reports pertaining to East Jerusalem in particular, check out this UN report and this journal article by a planning professional.)

Something I didn’t know much about, though, was what the building conditions in the occupied territories looked like on the ground, or what were the other big issues that need to be addressed in the peace process. Both of these things came together in our visit to the Deheishe refugee camp in Bethlehem. (See additional information here.) The right of return of refugees is one of these big issues - there are millions of Palestinians living outside of Israel/Palestine, whose families fled in the 1947-8 or 1967 wars or were expelled from their homes in between. Under international law, their children and children’s children, sometimes born and growing up outside of Israel/Palestine, are also refugees, and so the number of refugees has grown over the years. Although certainly not all of these families will want to return to their homes, some of them will, and the ones living in refugee camps most of all. The building conditions in Deheishe, where there is no civil authority in control other than the UN, are detestable; the entire place would come down in an earthquake, I think. The area began as tents and is now self-built concrete houses of multiple stories as families have grown over the 60 years the camp has existed. Still, the families who live there are making the best of a bad situation; for example, we spoke with a teacher at the school who showed us the women’s cooperative where women are taking classes and learning ways to supplement their families' income. The discontinued Israeli checkpoint (stopped operation after the establishment of the Palestinian Authority) still has the keys to the homes that these families left when they fled their villages during the wars. 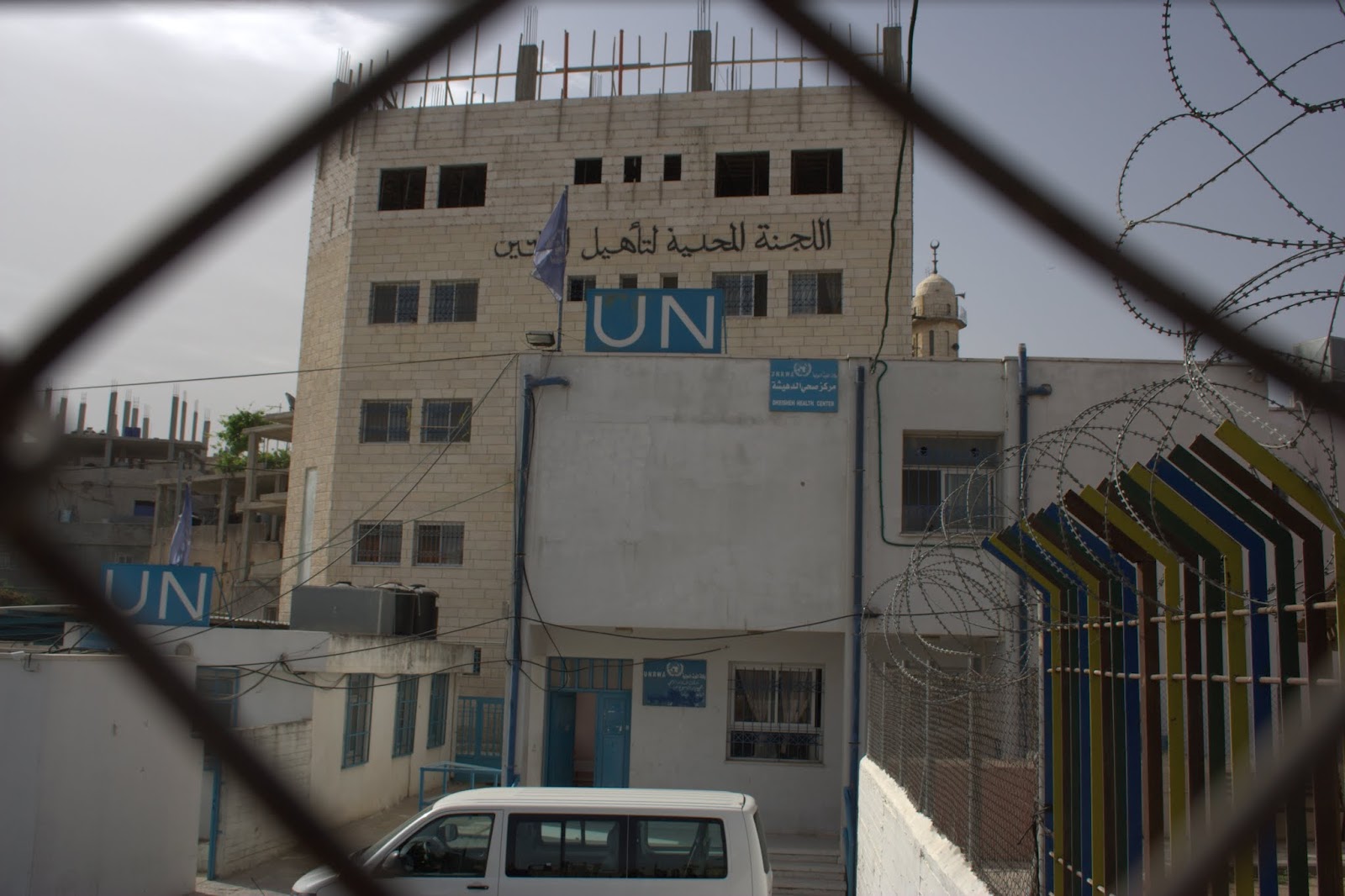 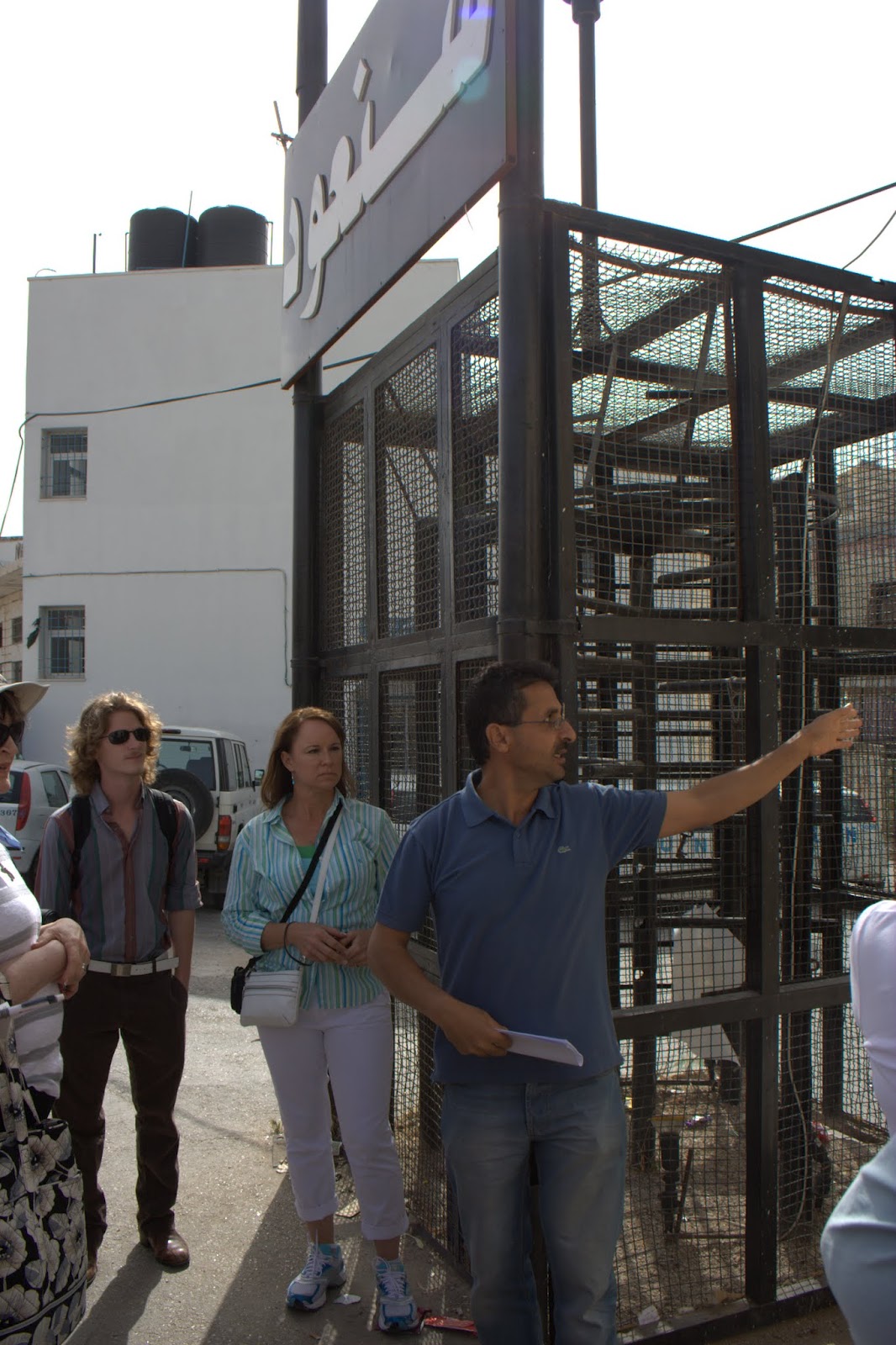 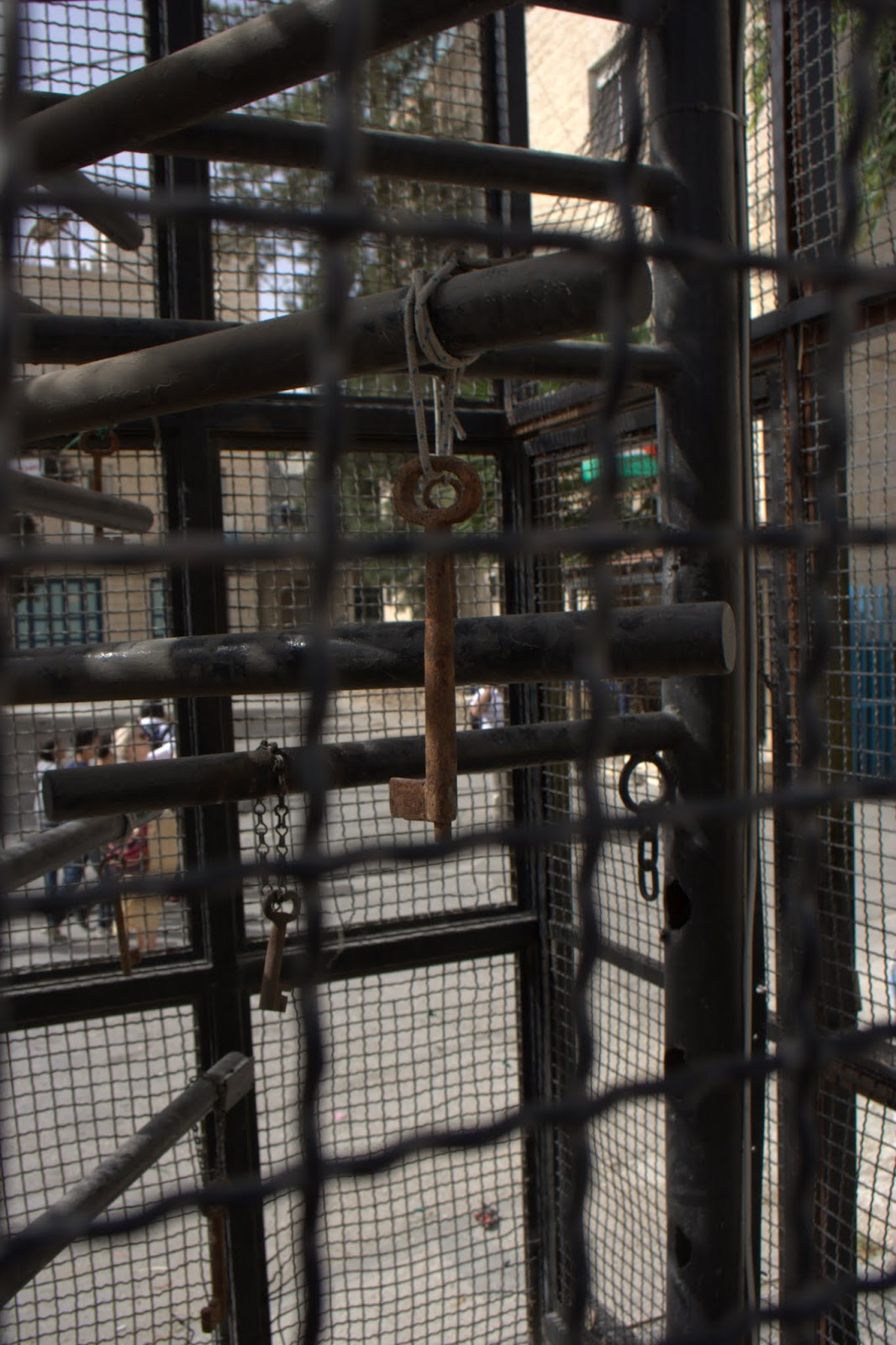 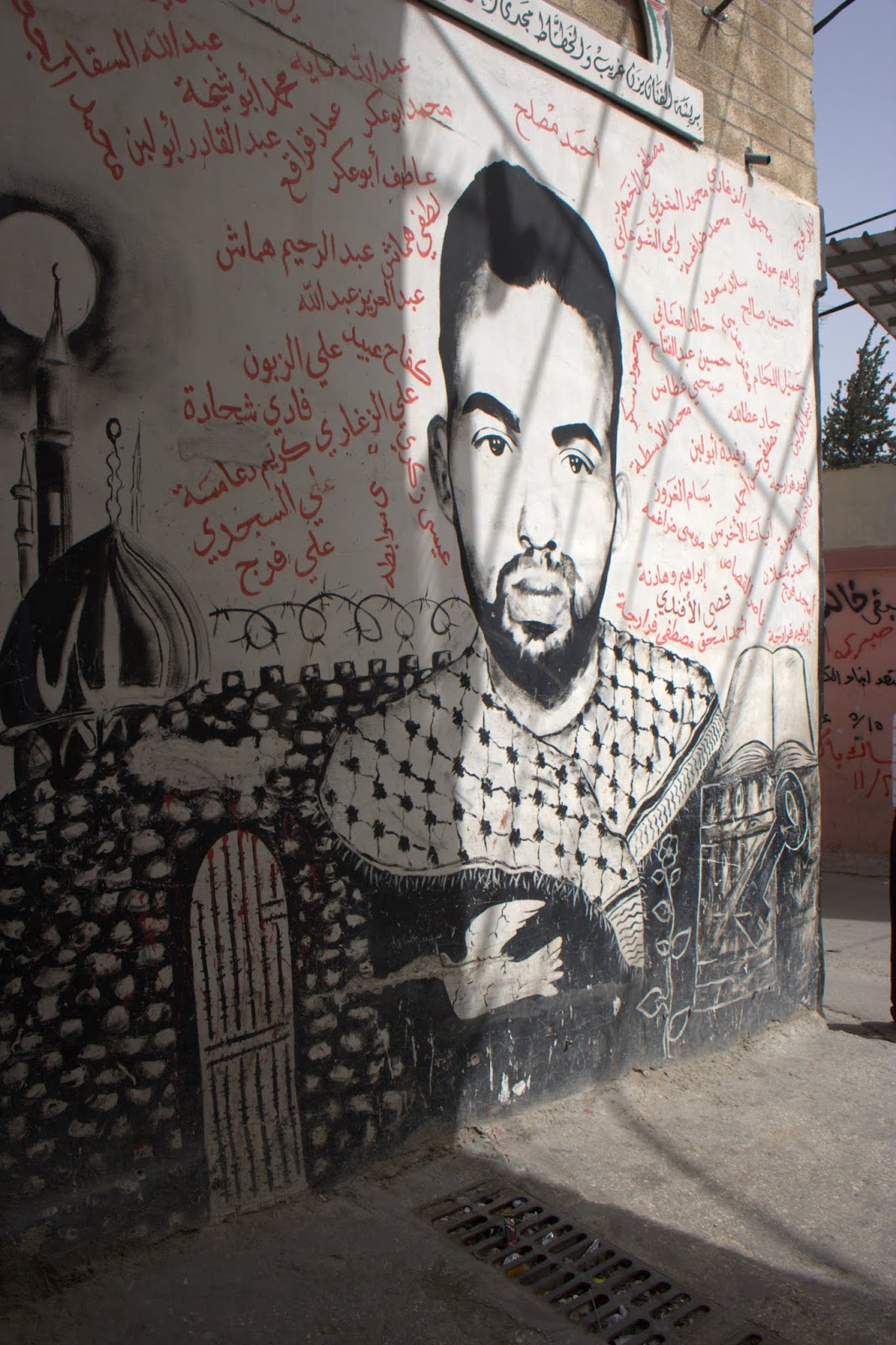 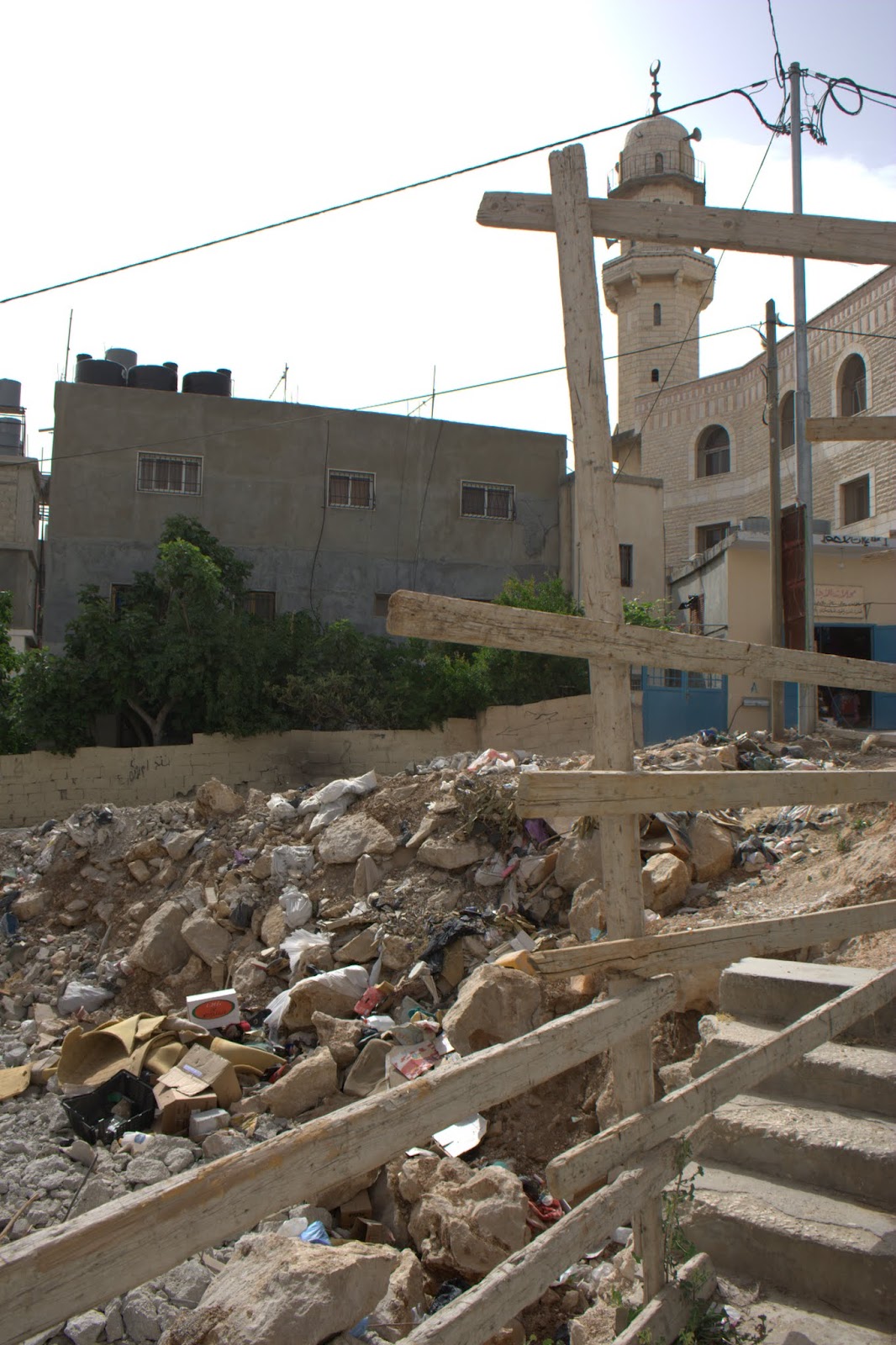 After our visit to Deheishe, we went to see the Dar al-Kalima College, which is at the complete opposite end of the spectrum: a beautiful new facility built with funds primarily from foreign governments and churches, part of the Diyar (Evangelical Lutheran Church) consortium that I’ve written about already. This is an art school that opened in 2008 with two-year degrees, seeking accreditation for a four-year degree. The college is proud to be training Palestinian artists, filmmakers, tour guides, and art teachers to bring hope and work to the young people of the area. The school focuses on art types that are not served at other area universities. I was surprised by the amount of figurative art on display, which is not seen as much in the US, and a bit disappointed in the quality of the work (seemed more high school than college-level work) but was very impressed with the studios and the goals of the college. 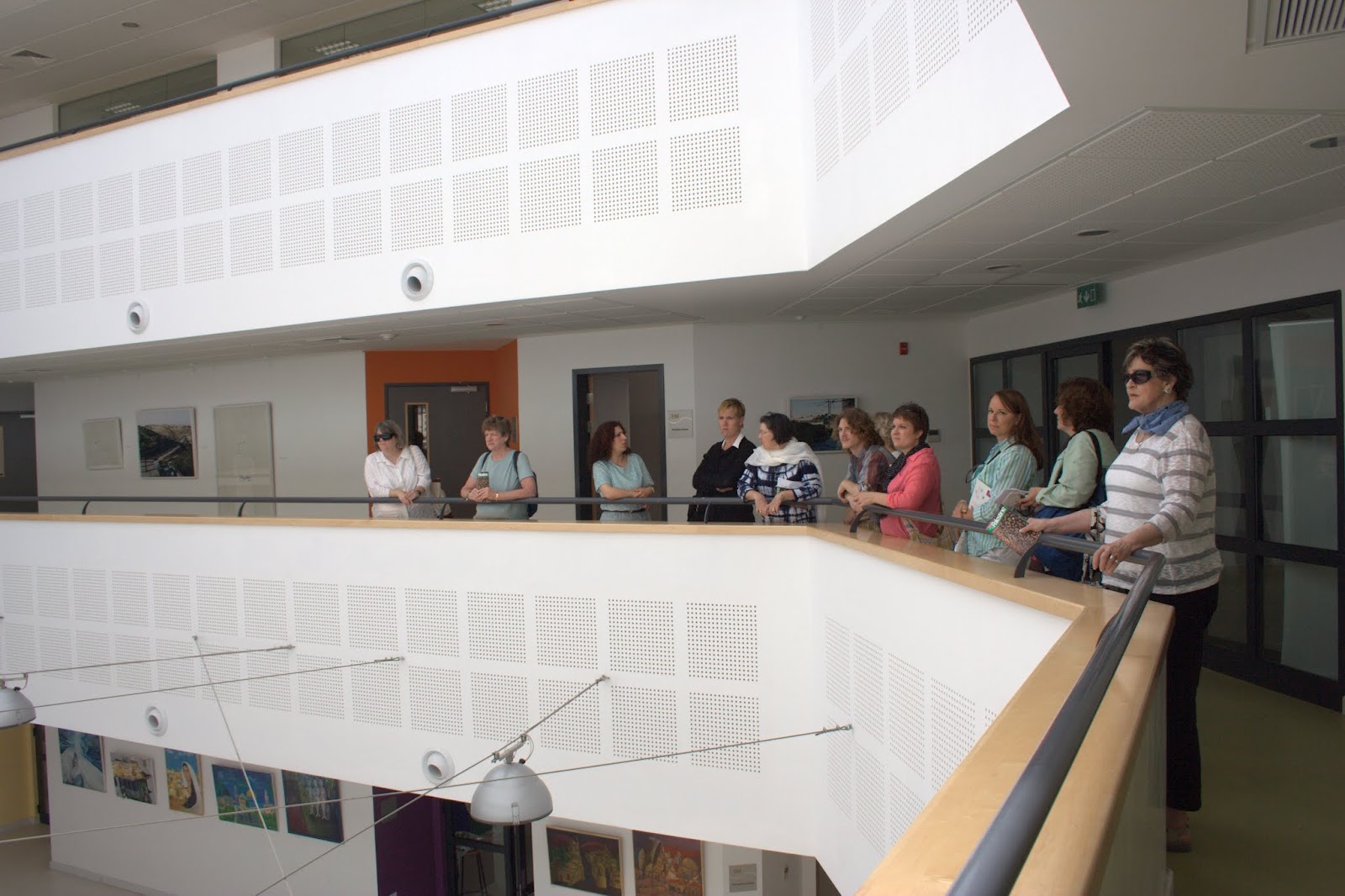 Next we got on our bus and drove south to Hebron, to speak with the Christian Peacemaker Team (CPT) that’s located there. Hebron has been a focal point for the conflict from very early on, since 1968 when the first Israeli settlers established a hold there. Most of the cities in the West Bank are under direct Palestinian civil and police control (known as Area A); the areas around them, Area B, are under what’s known as joint control (Palestinian civil authority, Israeli military control) while the areas in between, Area C (mostly farmland) is under full Israeli control. Hebron is different - because of the continued and ongoing conflict there, part of the heart of the city is under full Israeli control, while ostensibly the rest of the city is under full Palestinian control. The Israeli military controls the city center to “protect” the Israeli settlers there (what the soldiers actually do has been caught on tape as part of an Israeli human rights campaign). Our group was allowed into the city center on our bus because we’re tourists. We first visited the mosque/synagogue of the Cave of Patriarchs (and Matriarchs), also known as the Ibrahimi Mosque. This site is sacred to both Jews and Muslims as the burial place of Abraham and his familiy. We were allowed to visit the Muslim side of the complex, which has been split in two so that some areas are accessible to Jews, some to Muslims. On ten days of the year, the complex reverts entirely to a mosque; on a different ten days, it becomes a synagogue. A wall inside has a window allowing Muslims to see through to the tomb on the Jewish side. 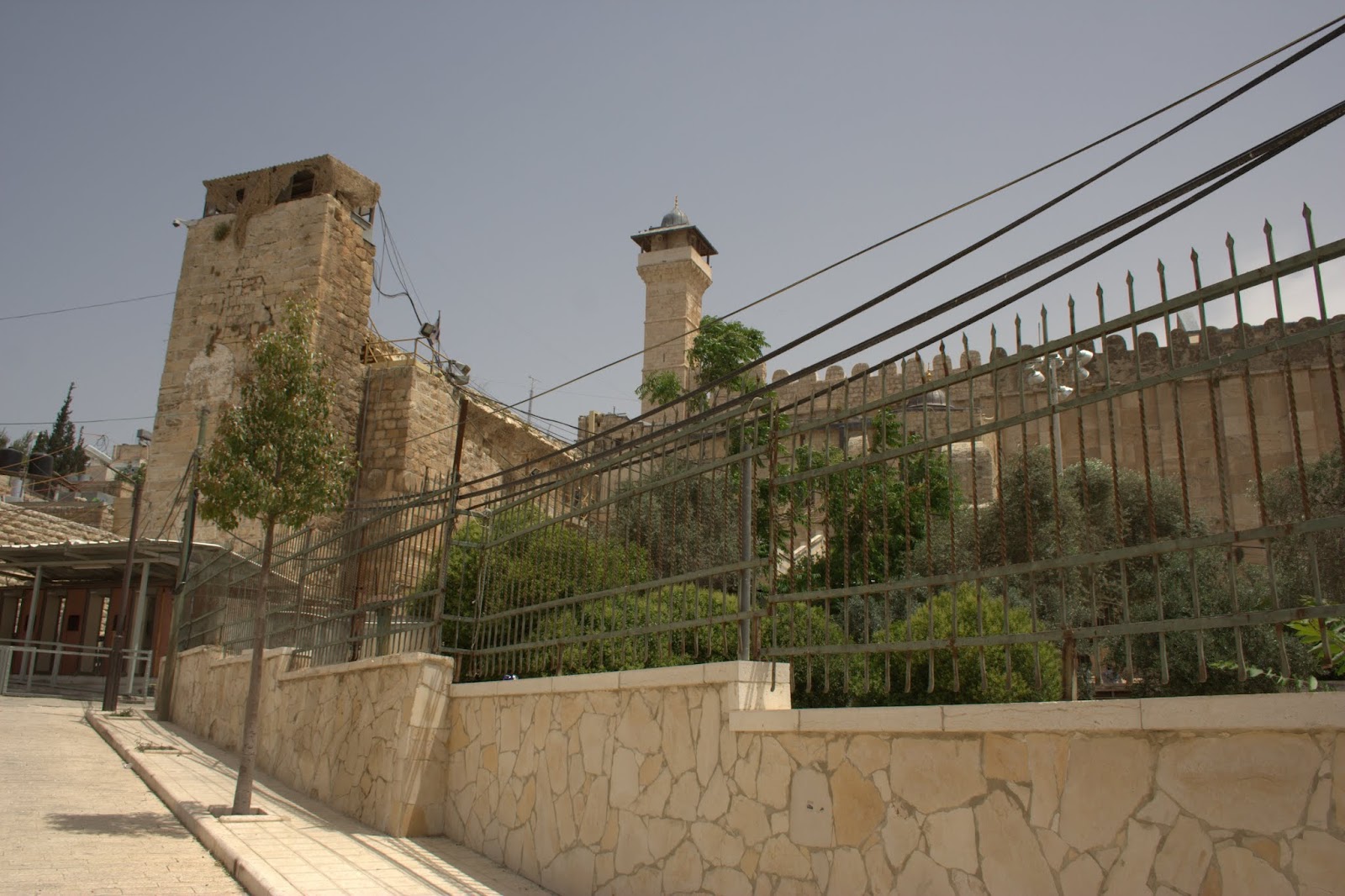 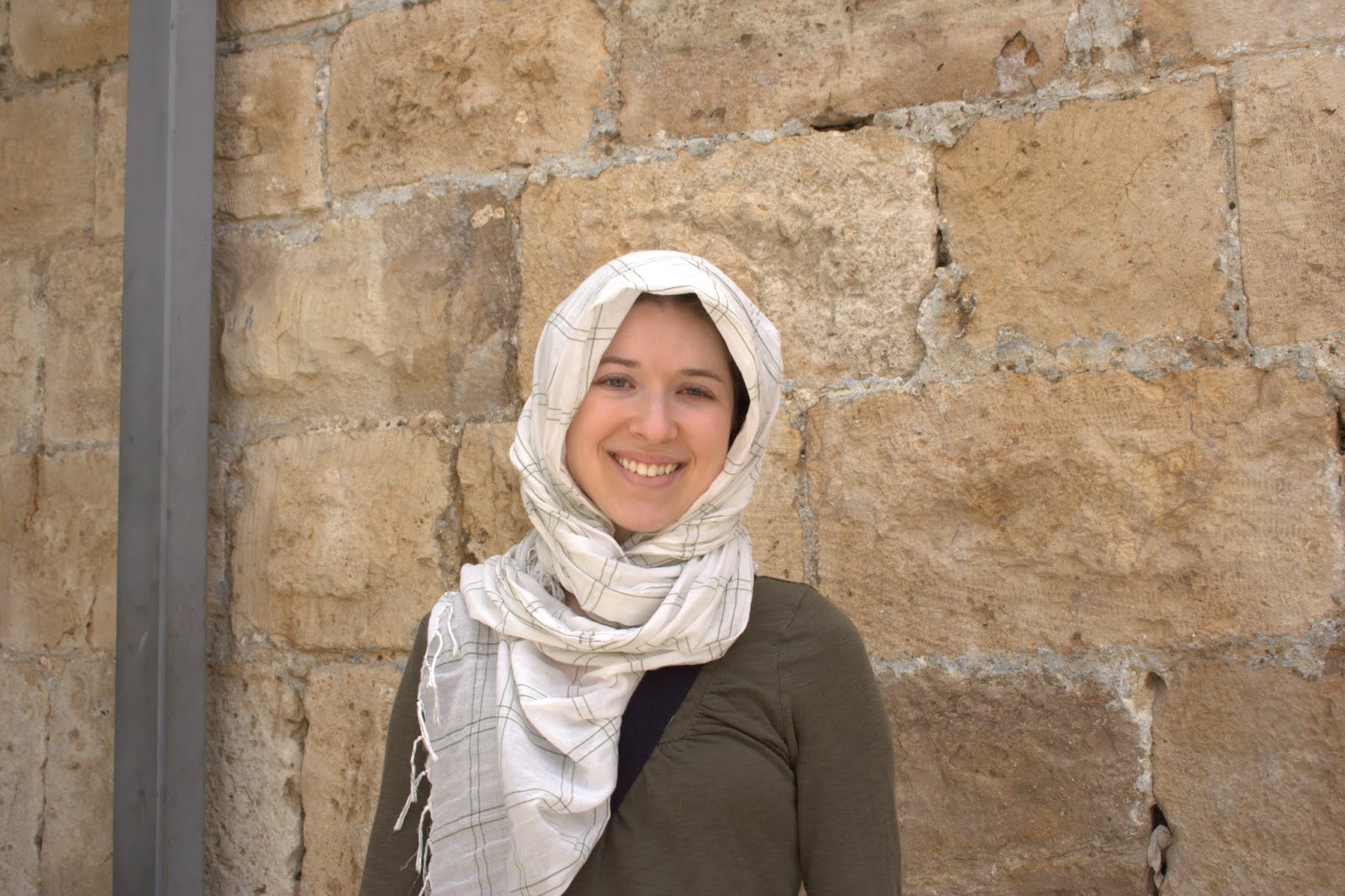 After our visit to the mosque, we headed through the checkpoint into the heart of the city, to meet with Alwyn of the Christian Peacemaker Team in Hebron. This group has a “ministry of accompaniment,” which means they literally accompany people on their way to work, to school, etc. For example, they will walk with children and teachers to school (thanks to Mary for the link), through the checkpoint, to observe and help prevent escalation by their peaceful presence. We were told that soldiers often detain teachers at checkpoints for hours, while their students walk by and have to watch them be humiliated. From the roof of the CPT apartments we looked out over the city and could pick out the buildings colonized by settlers based on their prominent display of Israeli flags. We could also see the street financed by American money that is now closed to Palestinians in Hebron, and used only by settlers and the military. As we left Hebron, we saw Israeli soldiers detain a man in the souk. This was definitely one of the more difficult places to visit, especially to see the empty streets where we could easily imagine what would have once been a lively city, and to see soldiers with automatic weapons everywhere, and checkpoints just to get in and out of the downtown area.

Walking through a checkpoint: 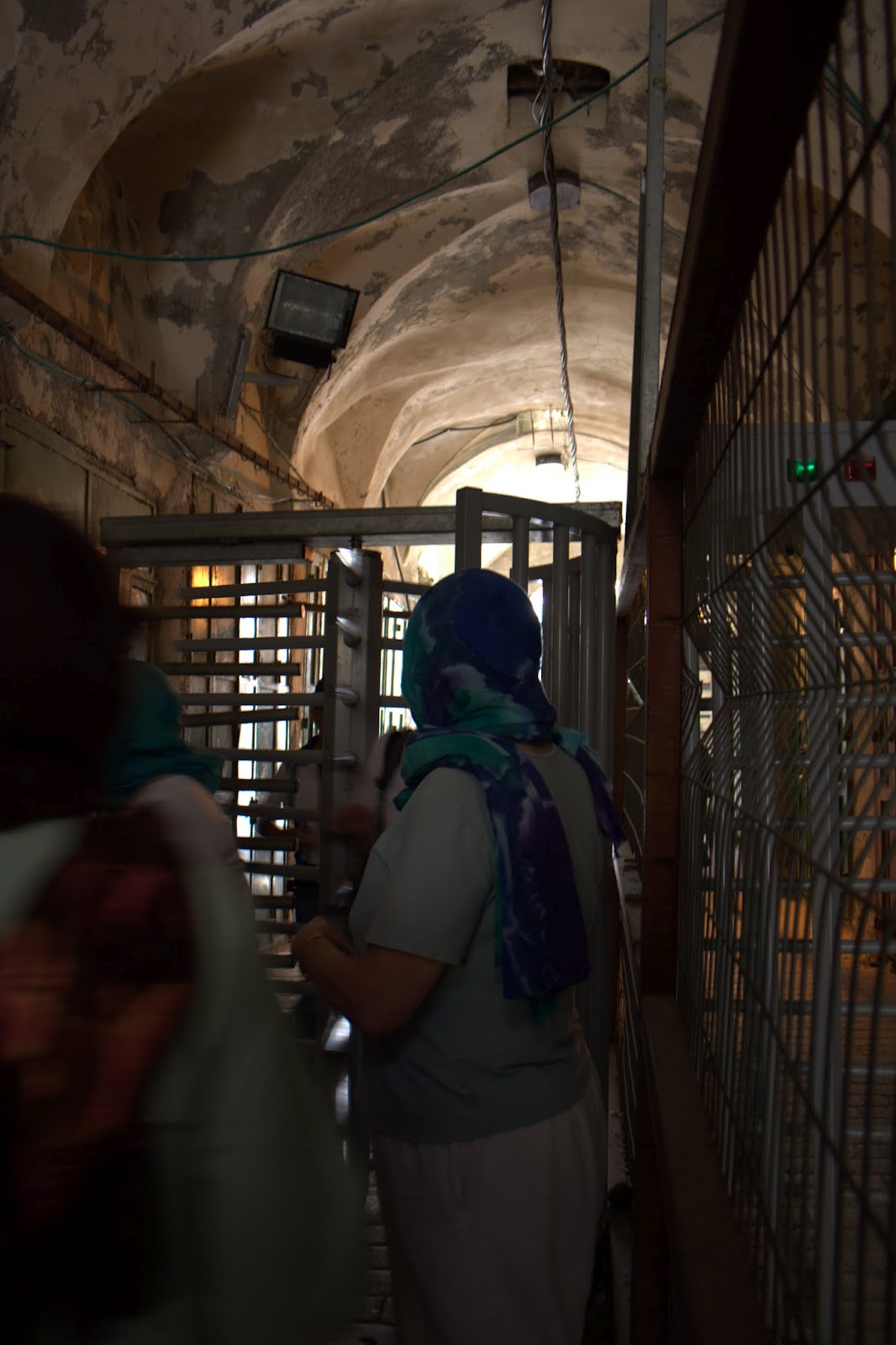 View over the city of Hebron: 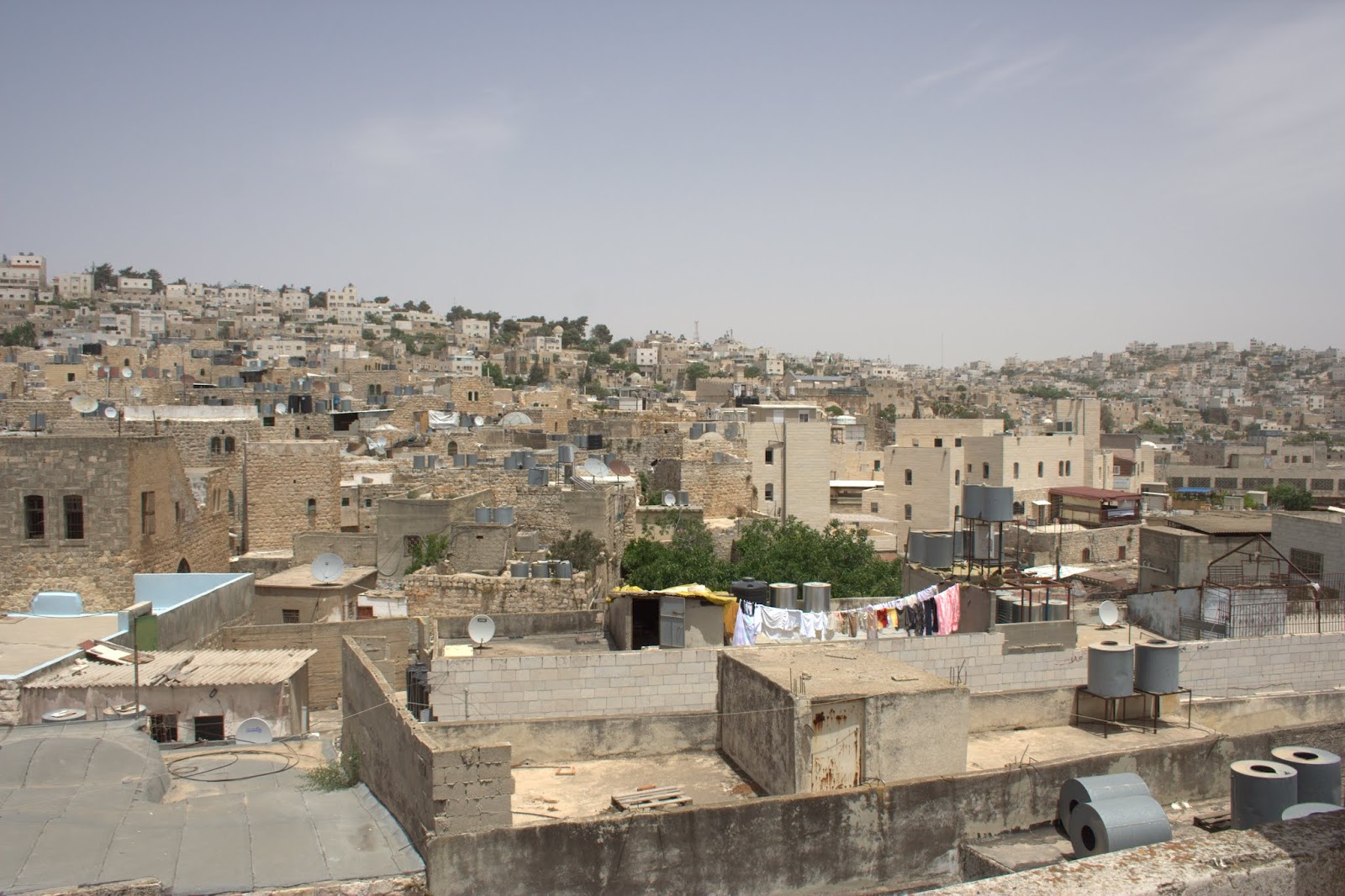 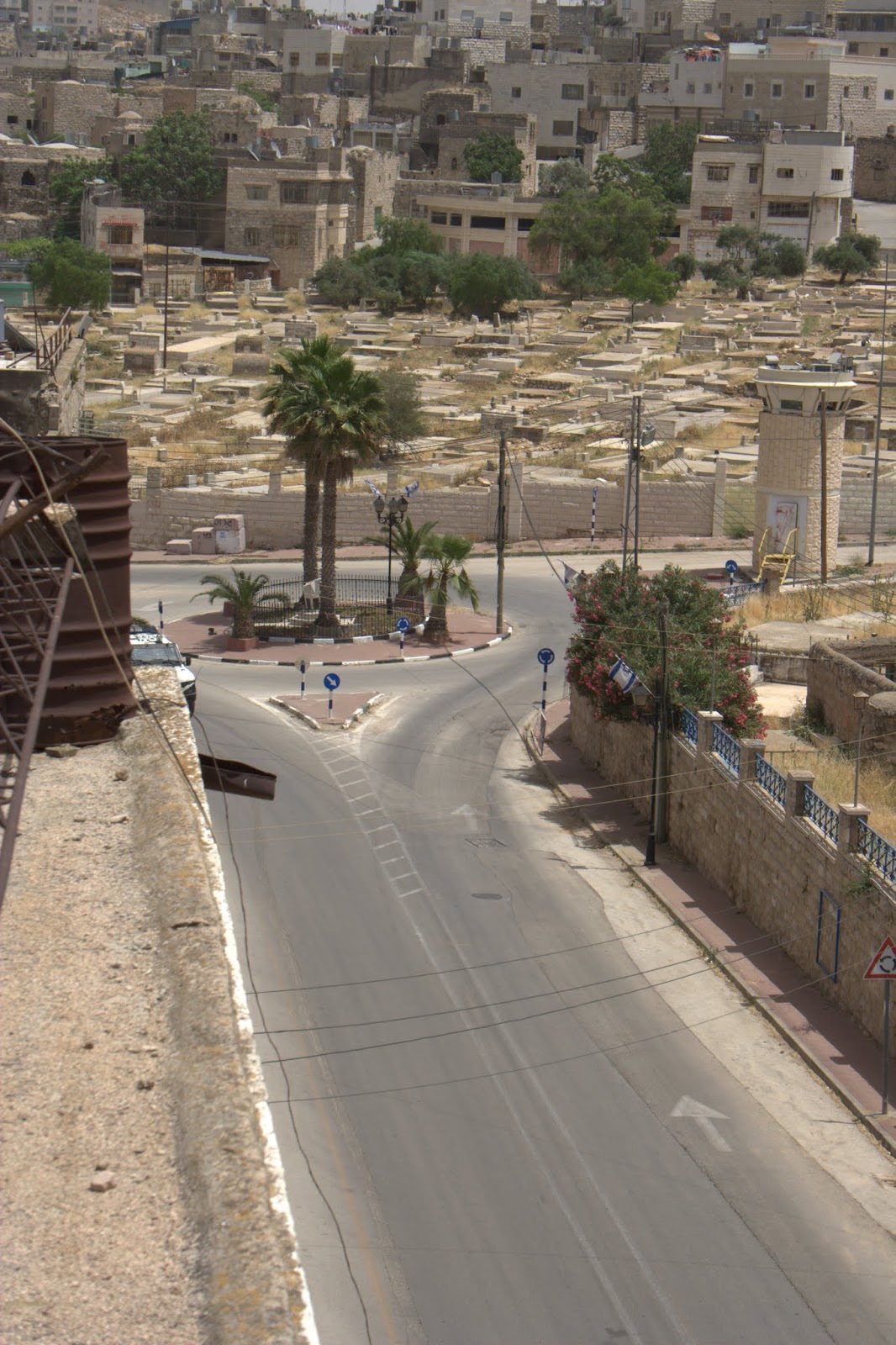 And yet, our day was not over! We returned to Bethlehem and met with Zoughbi Zoughbi (yes, that’s his name) at the Wi’am Conflict Resolution Center. This is a center that deals with interpersonal and other types of conflicts within the Palestinian community. Mr. Zoughbi was one of the most sincere and interesting people we had spoken with so far, and it was wonderful to hear about the work they do to promote gender equality, compassion, relationship-building, and more in a community that is under constant internal and external pressure. Here is the playground they have built, right next to the wall in Bethelehem: 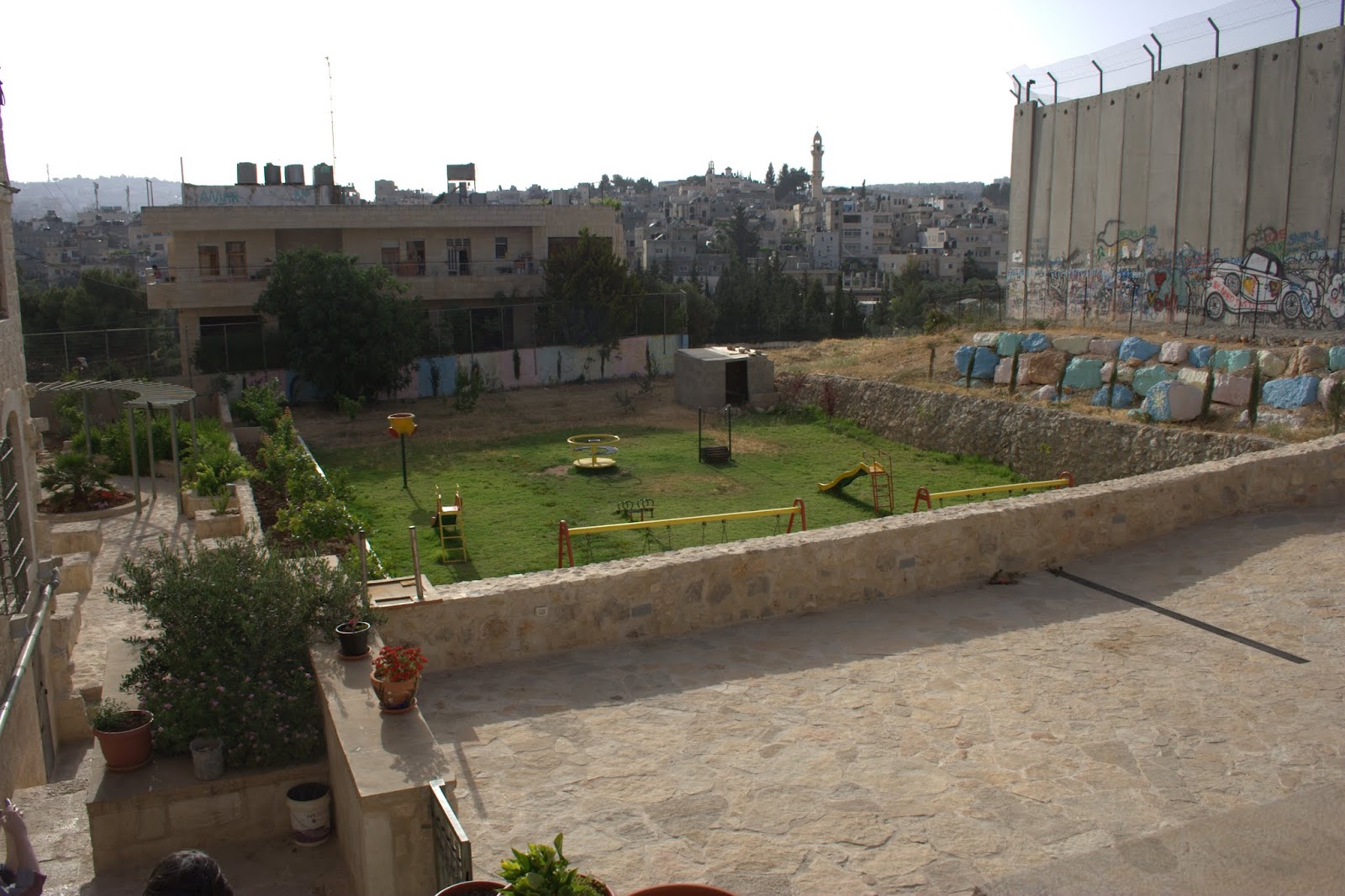 Finally we were done for the day - or I was, at least, and went to bed early! The rest of the group had yet another meeting after dinner, with Daoud Nassar of the Tent of Nations. Since I wasn’t there I can’t speak about this project in particular, but the rest of our group was really impressed with him and his work, so I recommend you check out their website for yourself; the Tent of Nations is working to operate an organic farm in the West Bank in the face of opposition from the government, which is trying to confiscate the land.

If you can believe it, that was one day of this trip. More to come!

(Note: I have now returned safe and sound to the US, but will continue posting my reflections from the trip, so stay tuned!)