We spent the day visiting sites around the Sea of Galilee, which as one person pointed out, is perhaps the only definite location we can visit today from Jesus' ministry, since the sea has not moved since that time. Everything else - towns, buildings, hills, etc - has changed, but the sea is the same. We started at the Church of the Beatitudes, a lovely modern church by Antonio Barluzzi (he built a large number, or perhaps all, of my favorite churches from the trip) built on the “mount” of the Beatitudes, where Jesus preached the Sermon on the Mount. Currently a Franciscan monastery, the Church of the Beatitudes has a very nice garden and is a good spot for sitting and thinking. 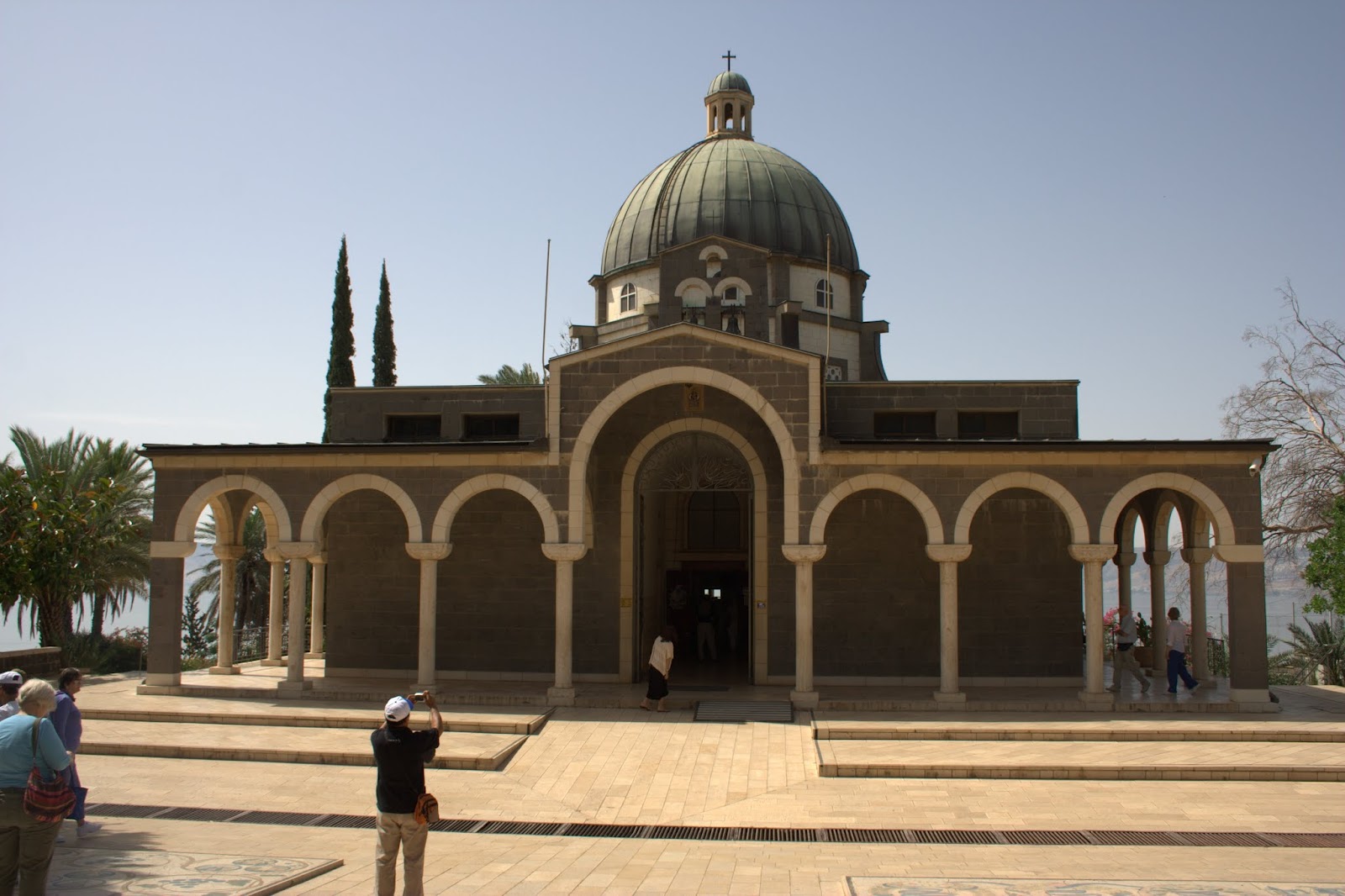 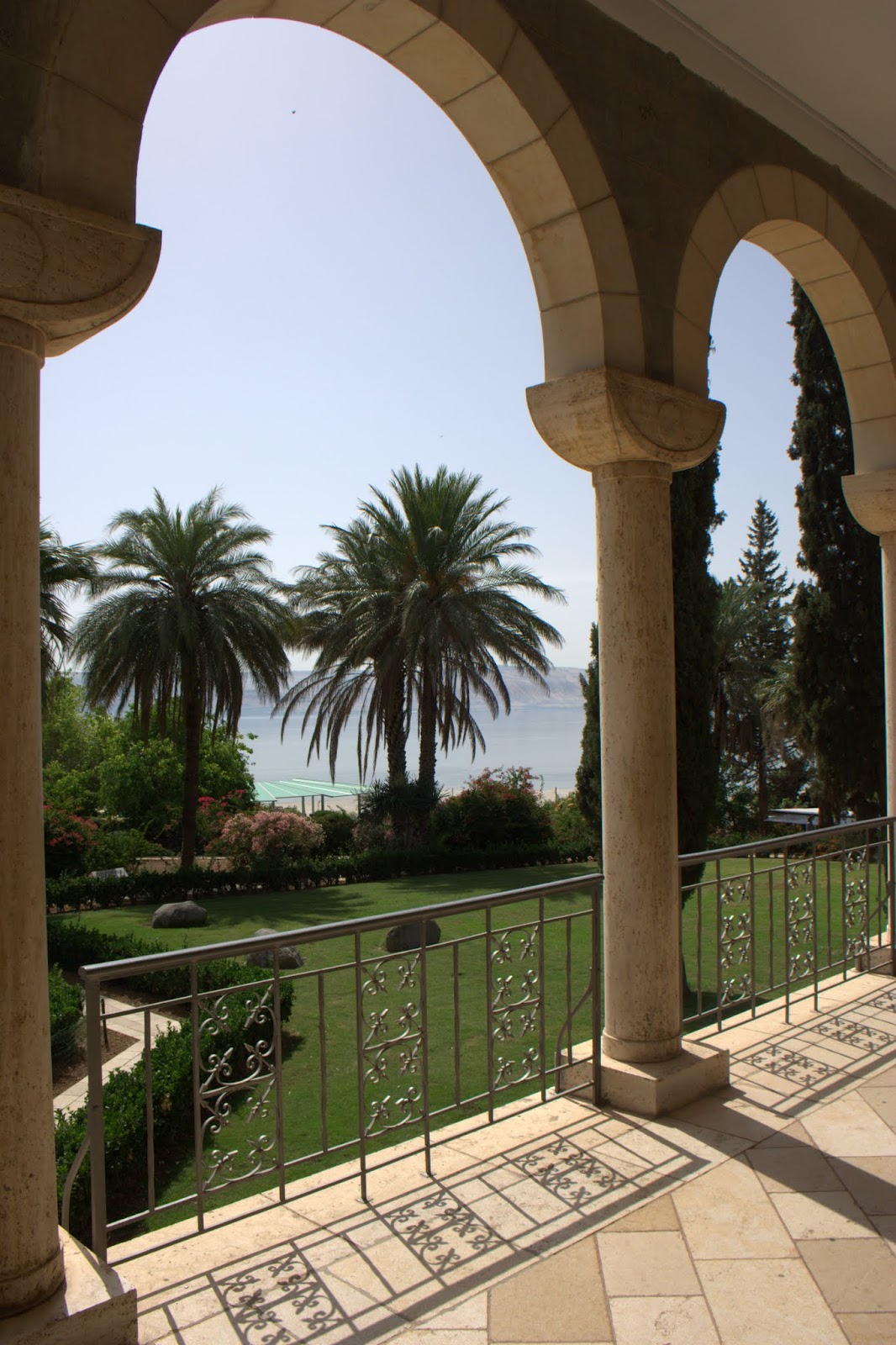 After spending some time at the Church of the Beatitudes we stopped next at the Church of the Multiplication of the Loaves & Fishes, also known as the monastery of Tabgha, a German-sponsored Benedictine monastery. This church commemorates where Jesus fed the five thousand (families) with fish and bread. To me the church looked like a “cleaned up” Early Christian church, like a stripped-down version of Santa Sabina in Rome, and apparently it is built to the same size and proportions as the 5th-century church that existed previously on the site. The only odd part was the koi pond in the atrium! There wasn’t much to see here, though, except the 5th-century mosaic floors with the depiction of the loaves and fishes. 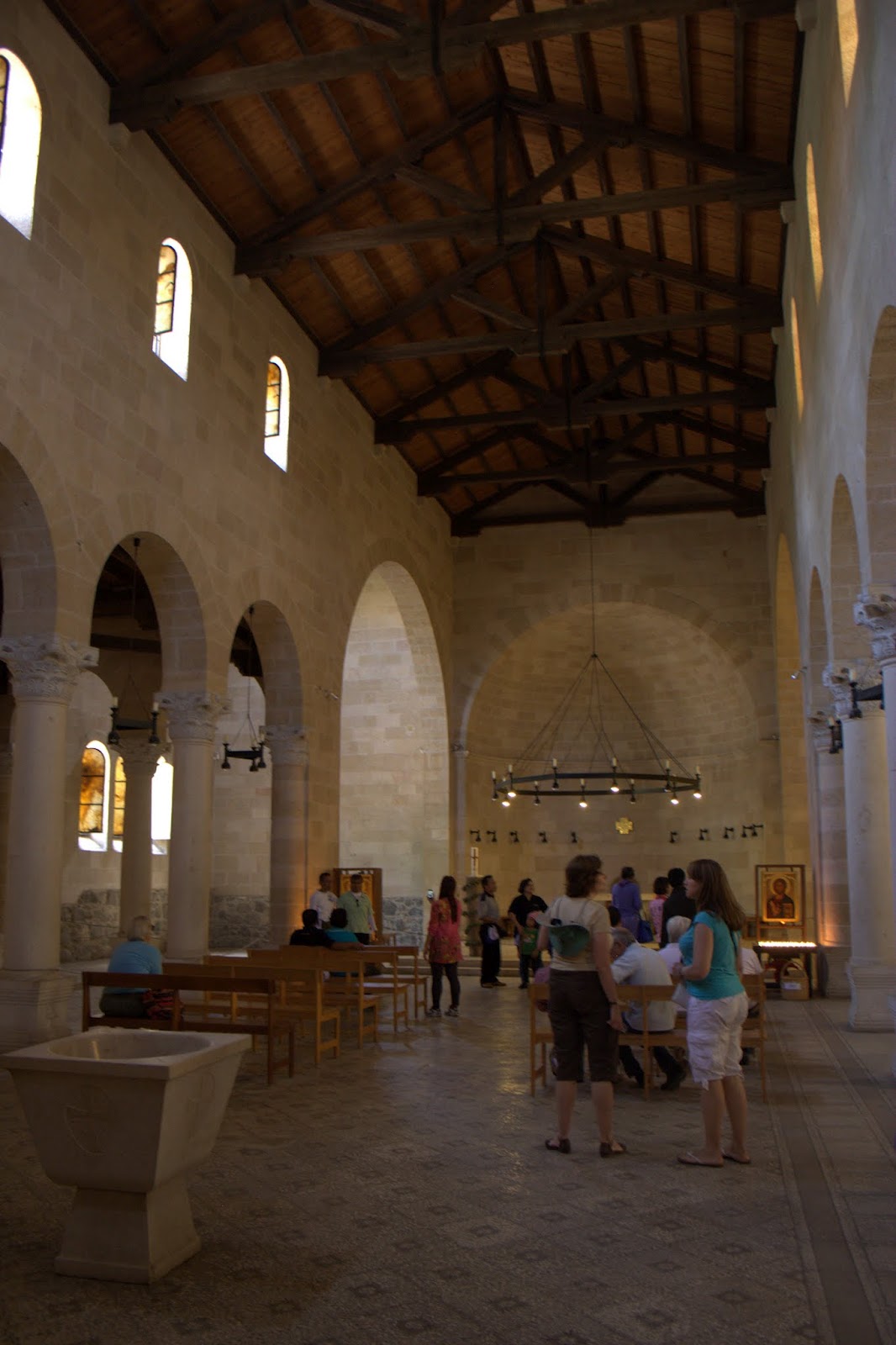 Next we took a boat ride on the Sea of Galilee and took communion there, a celebration that some in the group found to be the most moving part of the entire trip. The boats that take these short trips are called “Jesus boats” since they are recreated to resemble the boats used in the first century. All along the shores of Galilee are fancy homes, churches, and leisure areas - there were even three or four guys on jet skis! It reminded me of Lake Michigan or Lake Leelanau where my grandparents have a summer house, except hotter and dryer. The only big difference is that people don’t swim in the lake, and we saw why as we went along: the combined stormwater/sewer of the neighboring areas dumps into the lake. Sad. The boat trip was a nice break from the constant church-visiting, though, and a pleasant trip. After that we had “St. Peter’s Fish” (a type of local tilapia, all of it farmed… but probably farmed relatively close by) at a big tourist restaurant and then we were on our way to Capernaum. 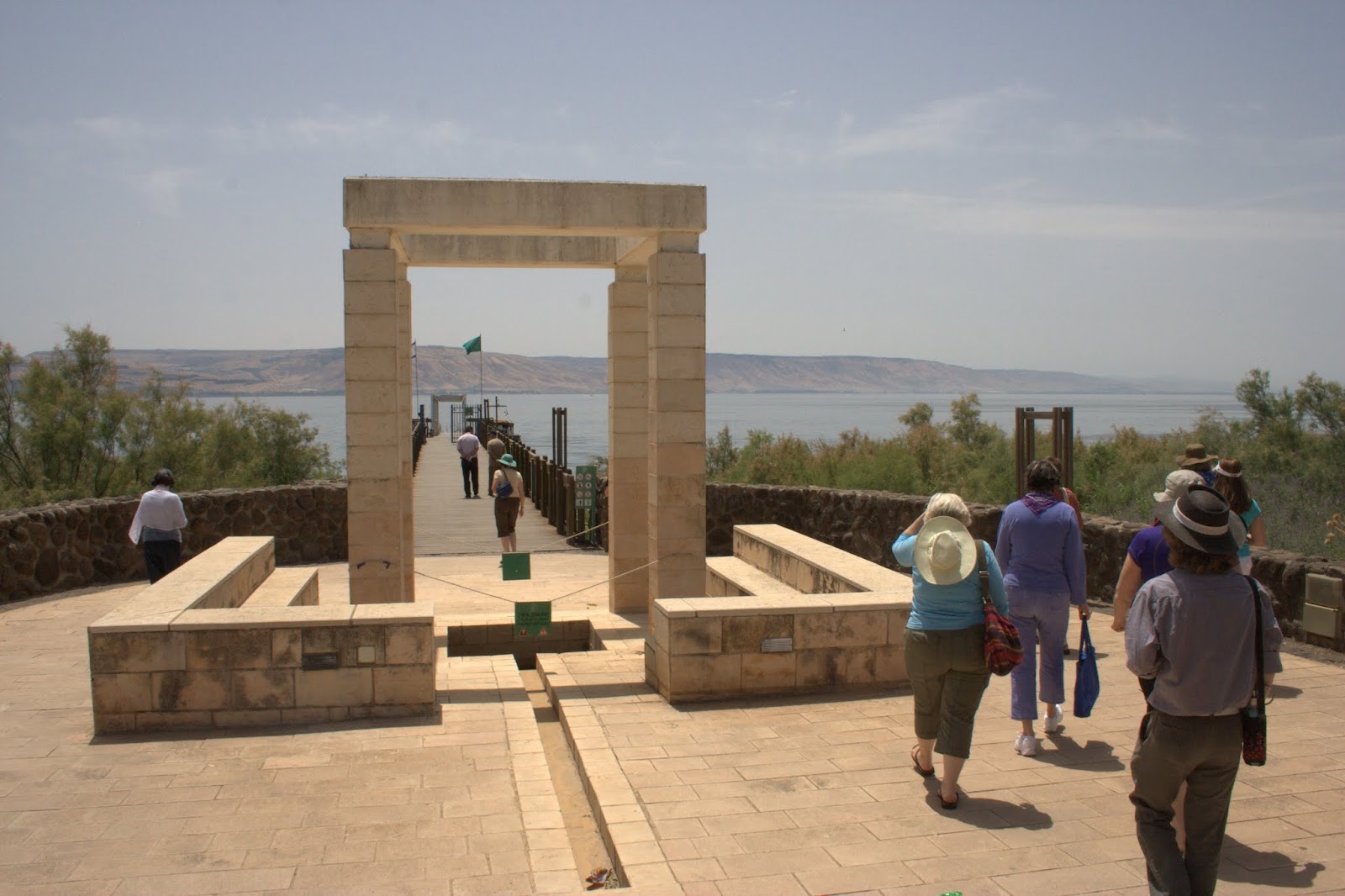 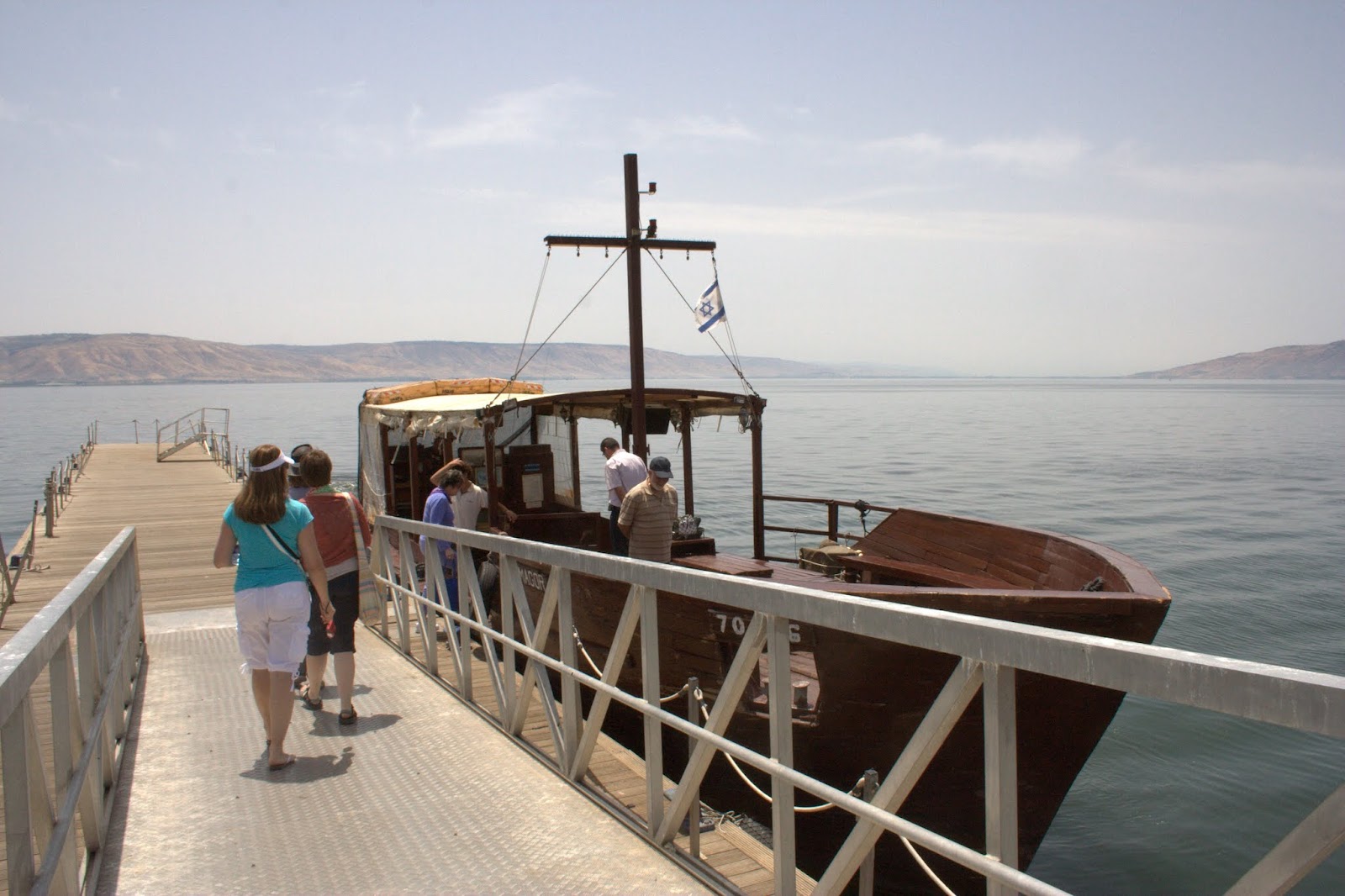 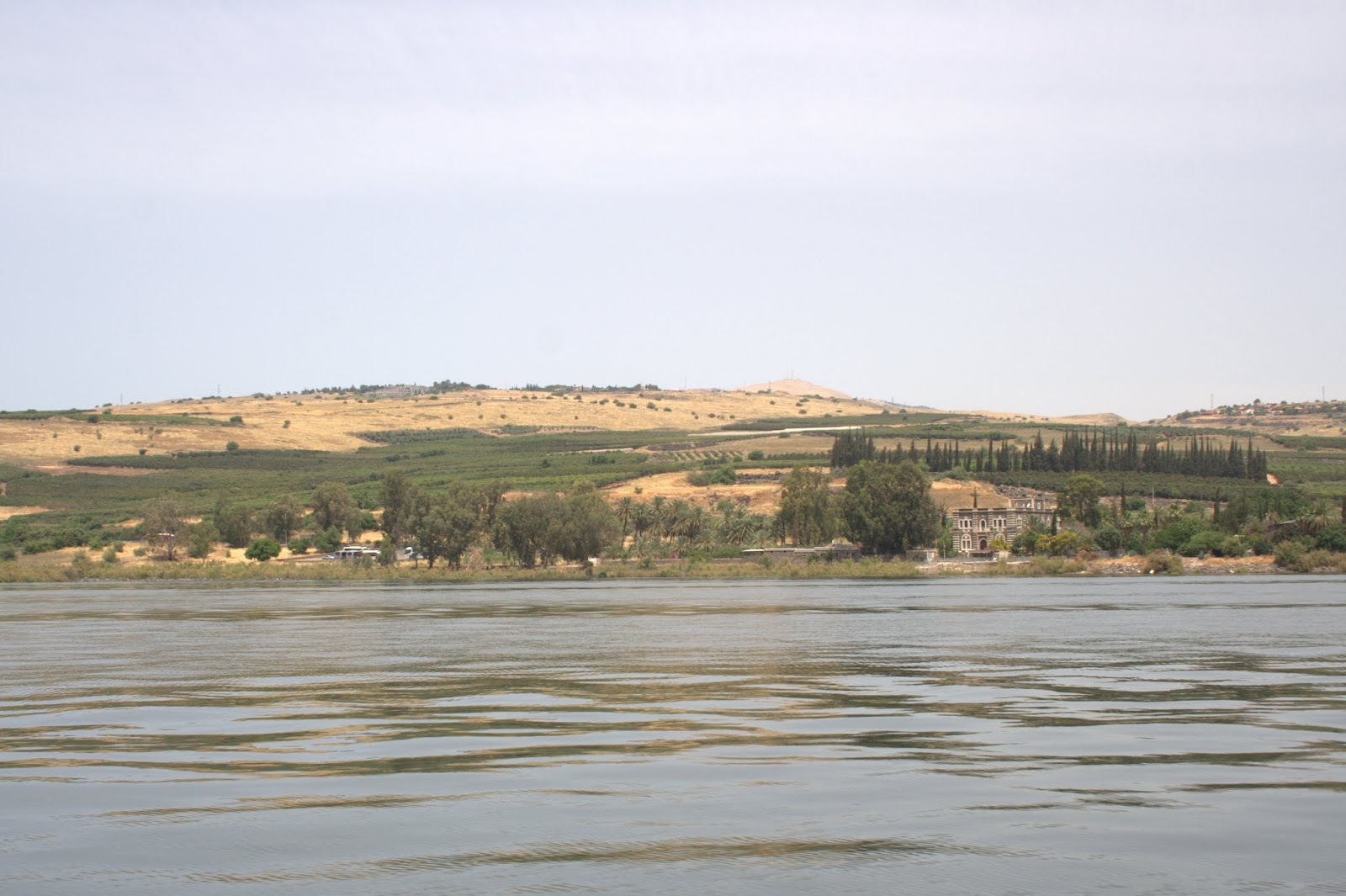 Capernaum is now a historic site, with the ruins of the synagogue Jesus would have attended, the ruins of the first-century town, and a church built over the home of St. Peter(’s mother-in-law). The church there now, which straddles earlier Byzantine church ruins, was built in 1990 and was pretty neat; the entire thing is cantilevered from posts at the edges so as not to disturb the ruins below, and the center of the floor is glass so you can look down into the ruins from inside the church. Also it looked kind of like a space ship. Very Wrightian. And I was interested to note a Star of David in one of the ancient architraves - showing the hybridity of Jewish and Roman symbols. Also: kitties! 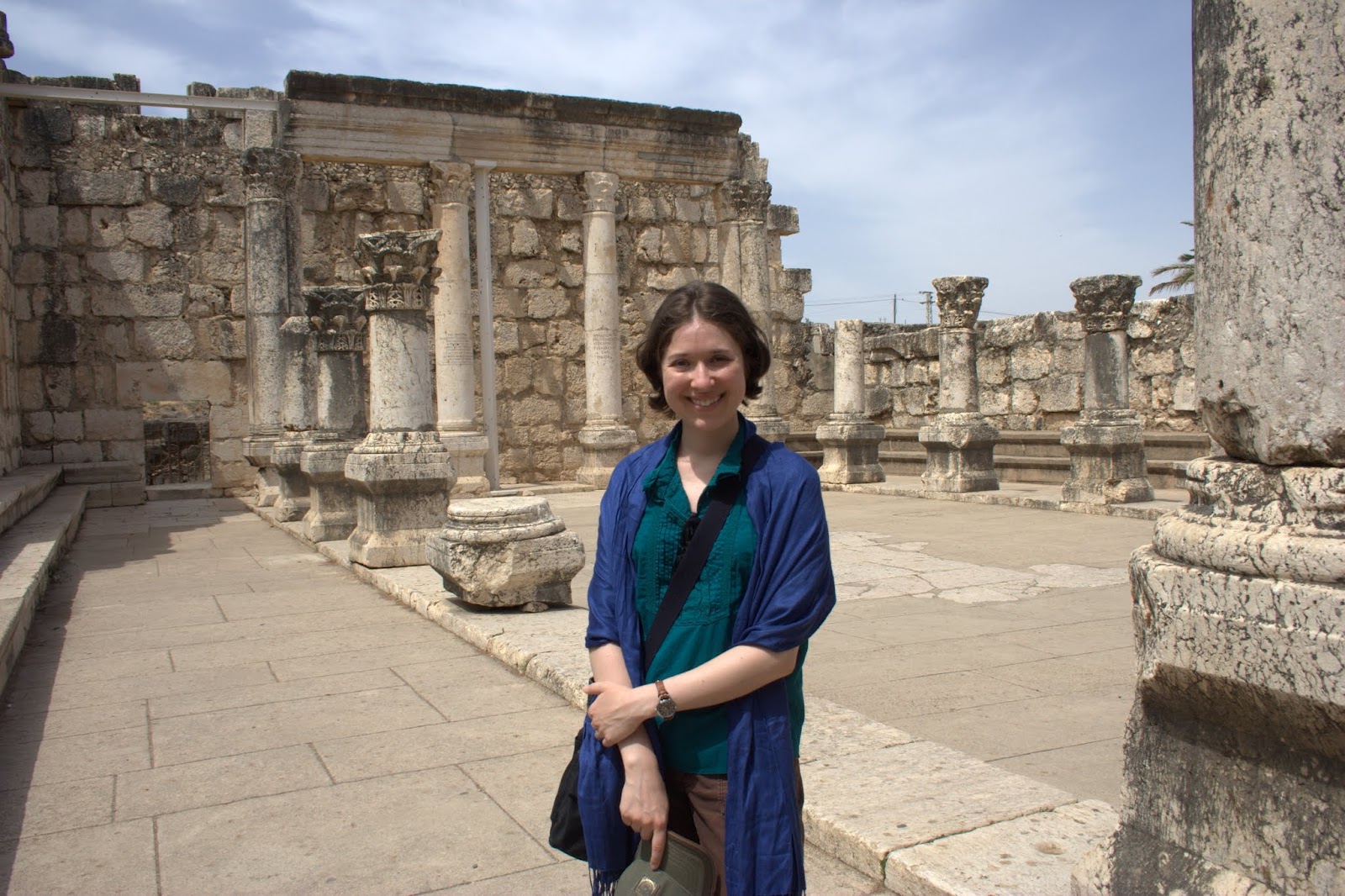 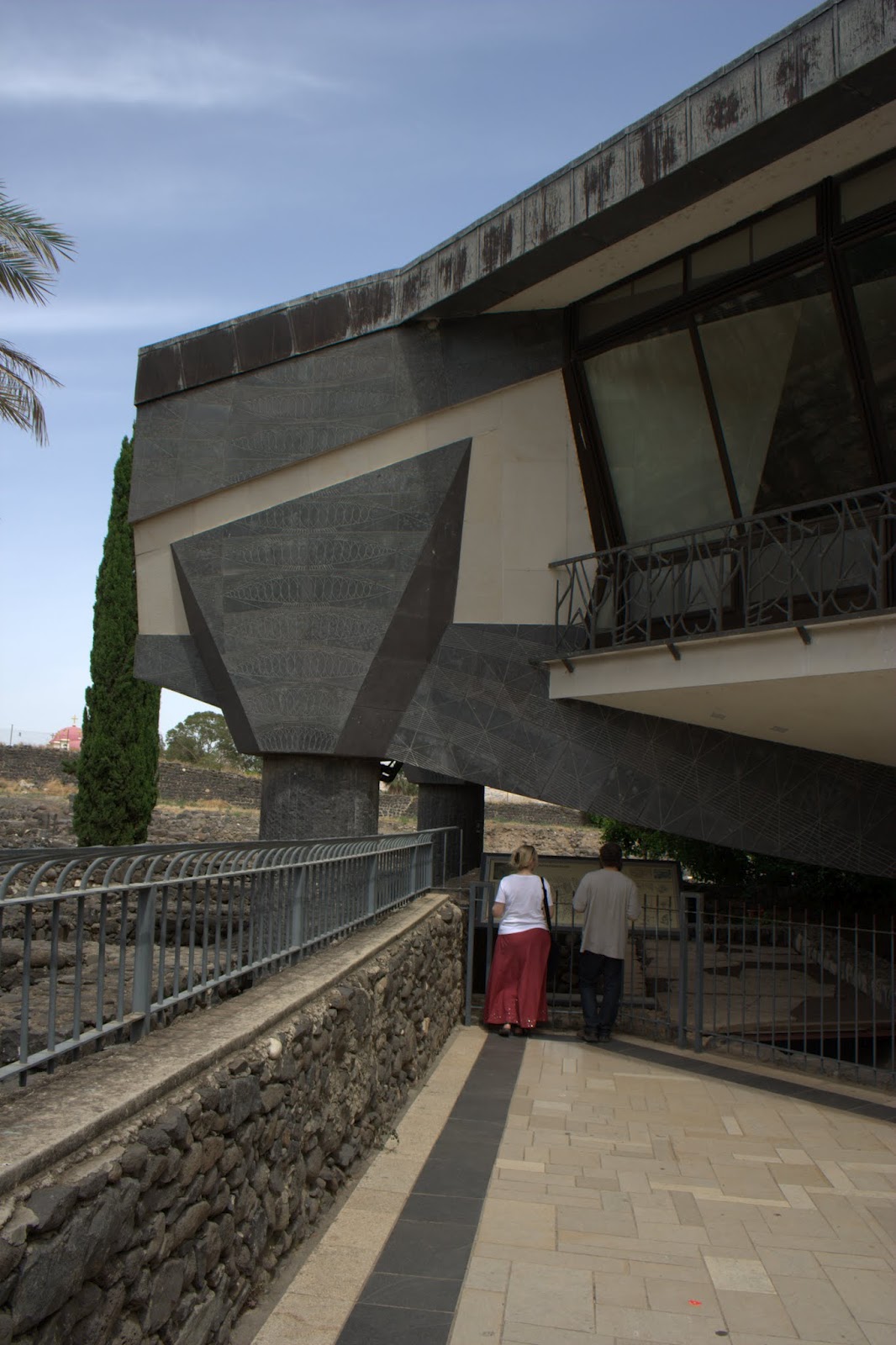 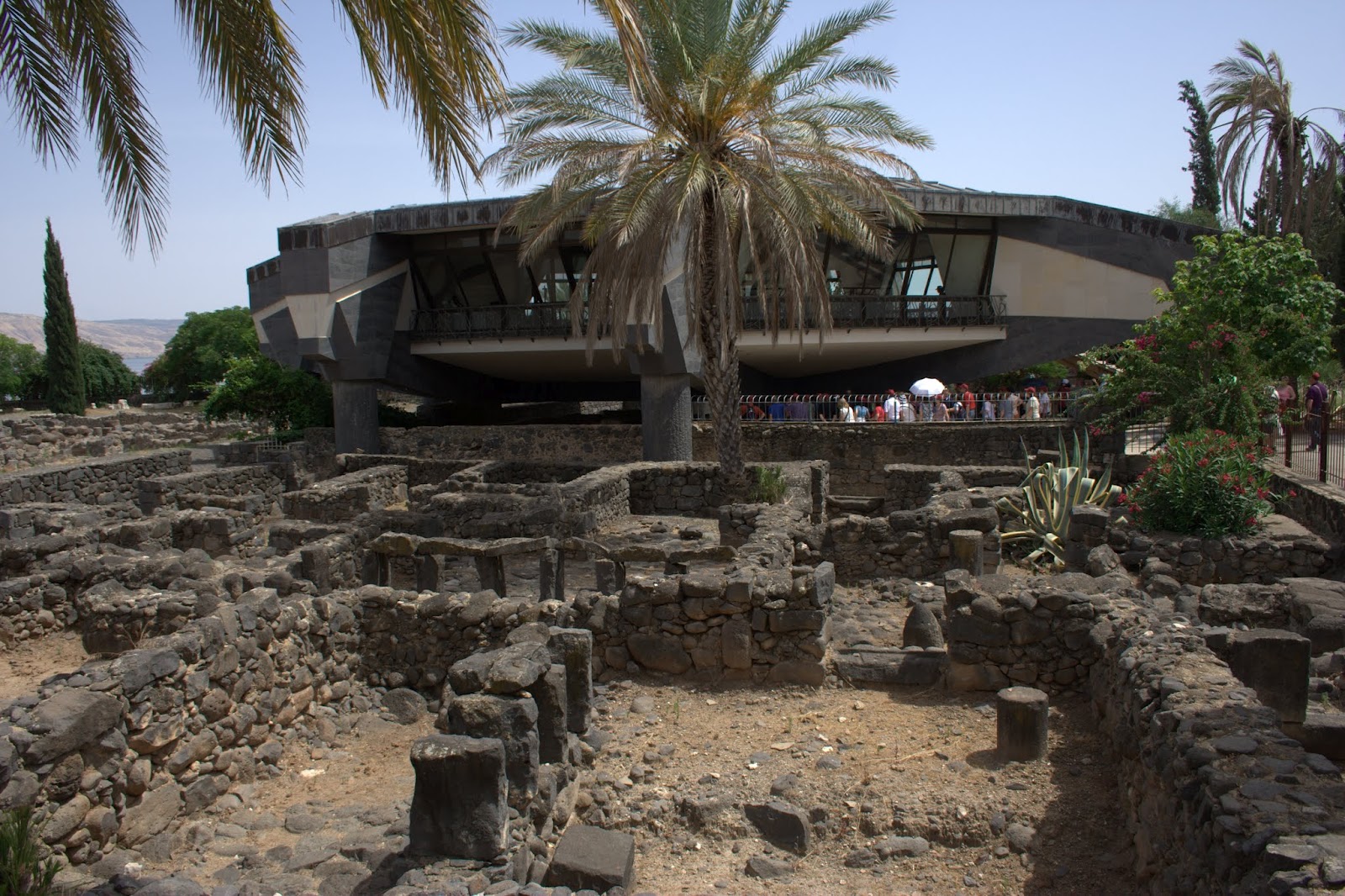 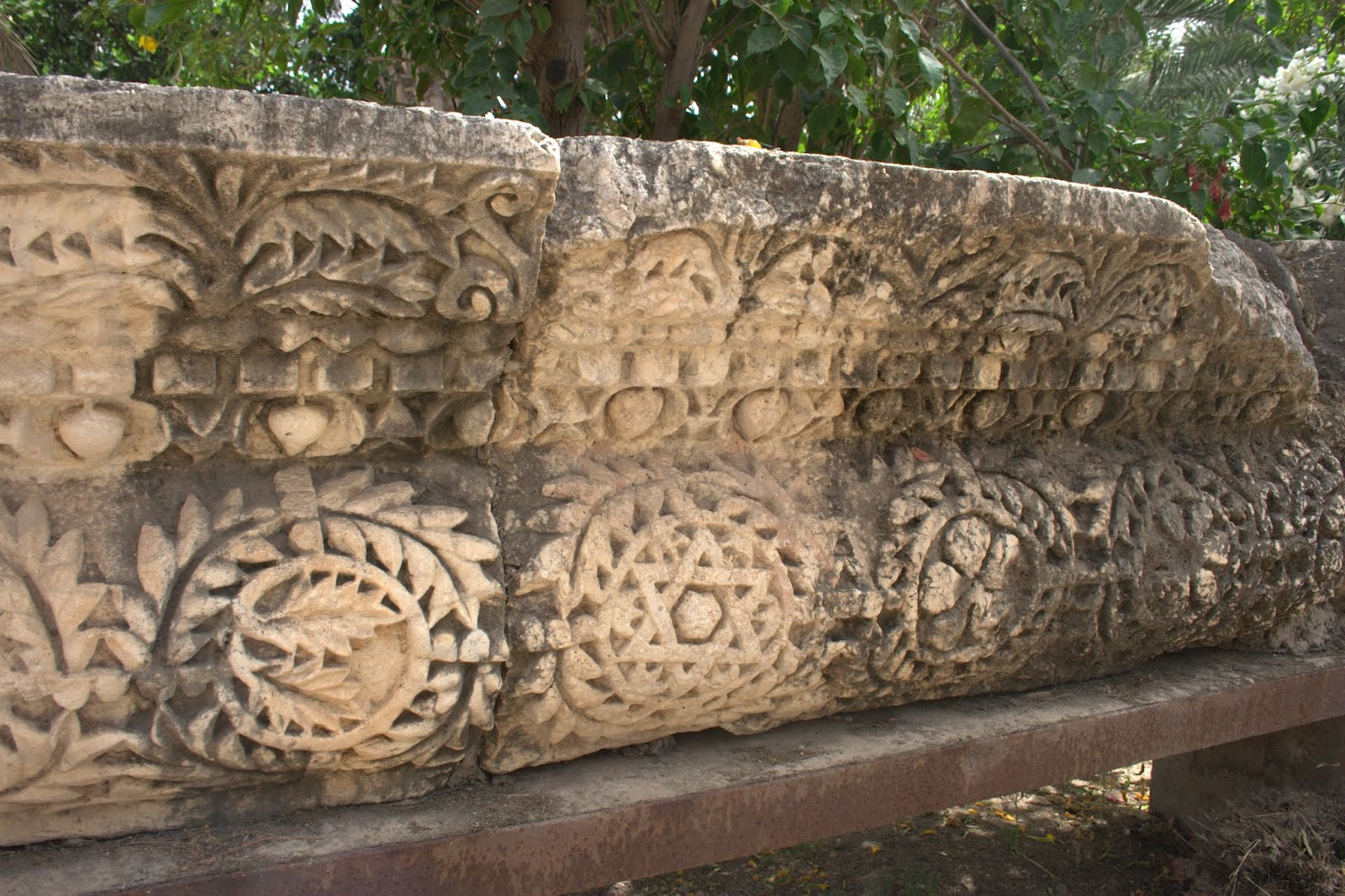 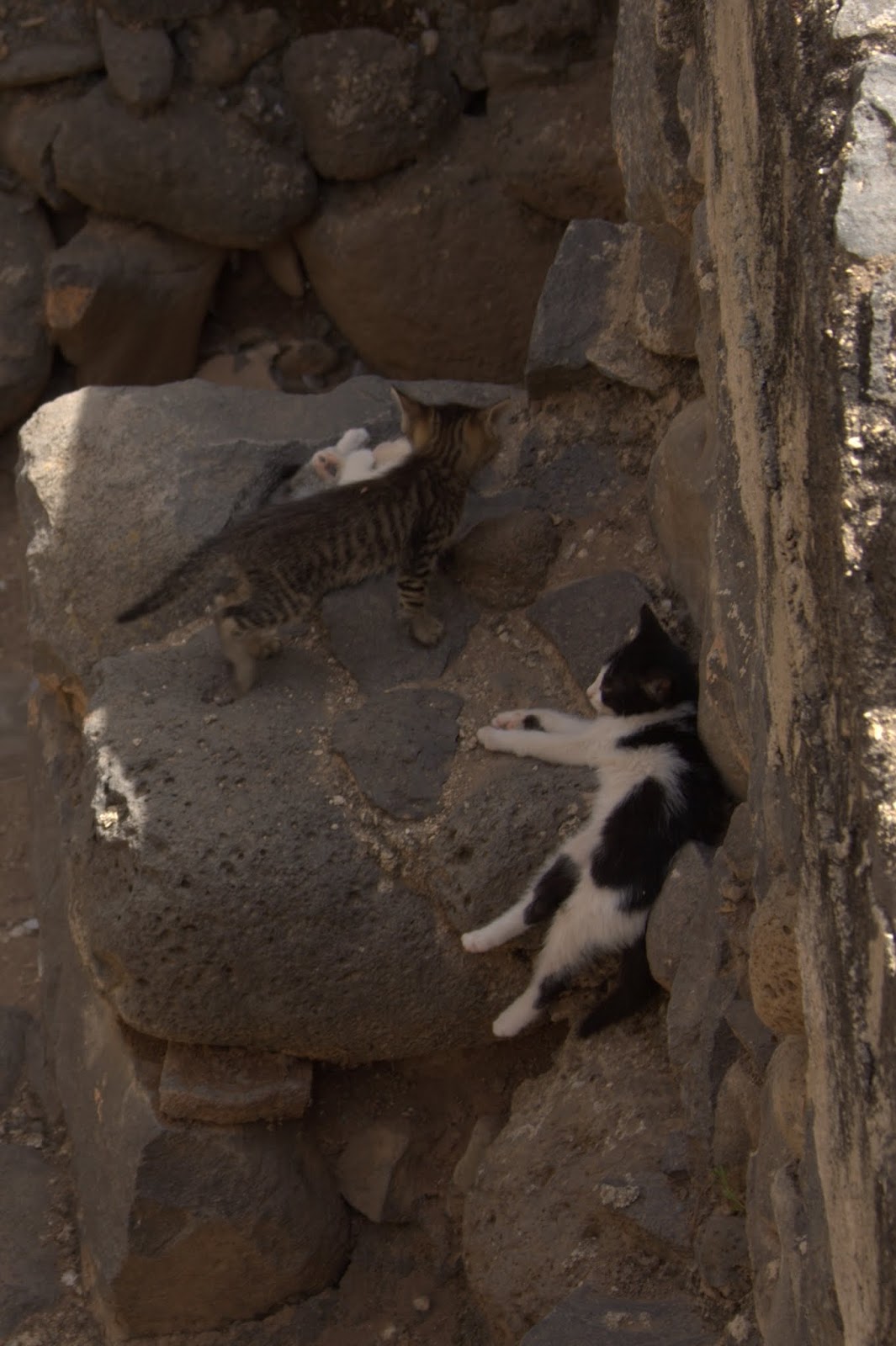 Next up: the Church of the Primacy of St. Peter, where Jesus put Peter in charge. This church is actually on the shores of the Sea of Galilee (despite the drop in the level of the water), and I watched many of the visitors take off their shoes and socks to wade out into the lake. The church is pretty tiny and is half-filled with a big rock that may have been used as a table by Jesus and the disciples. 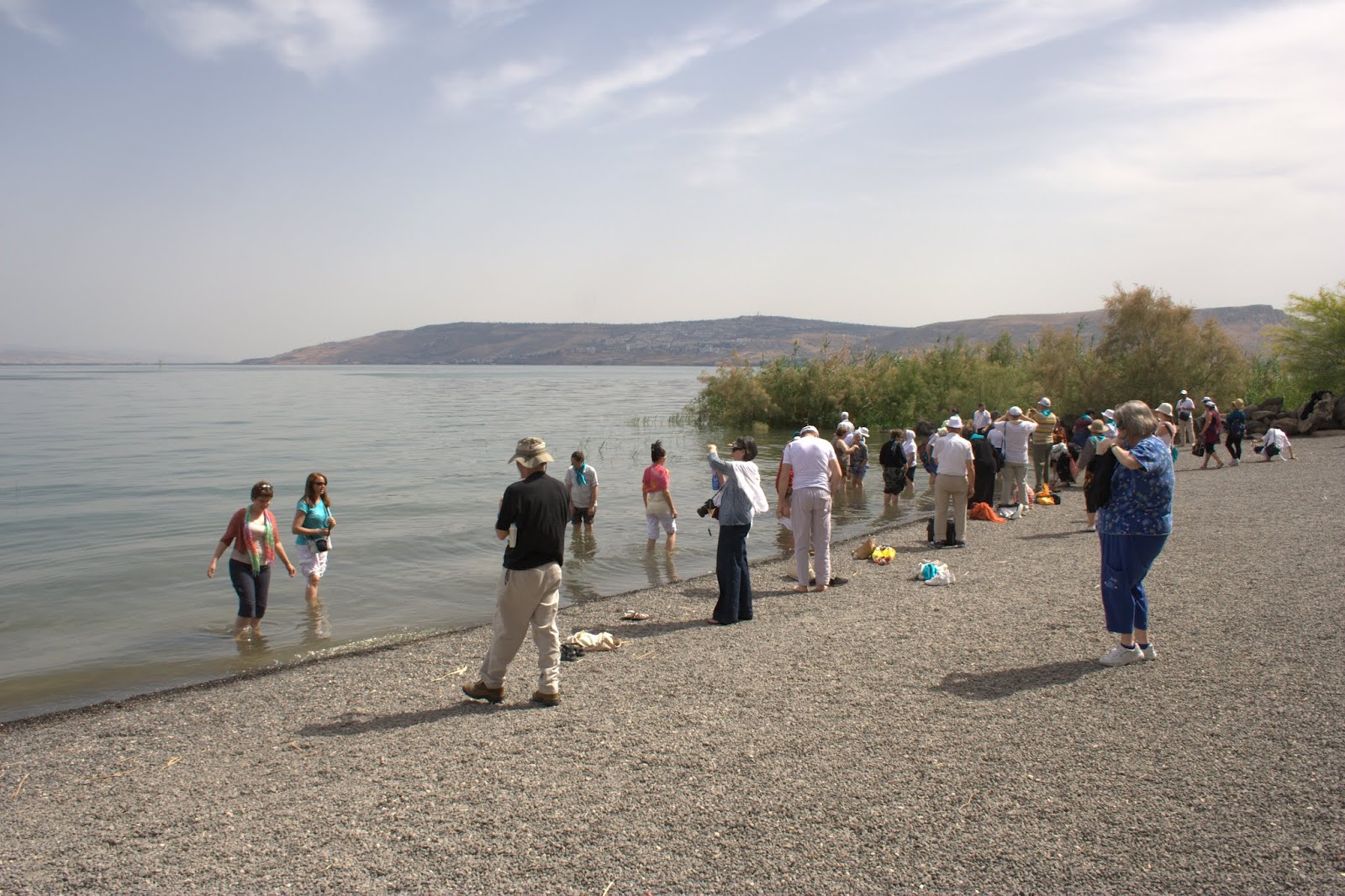 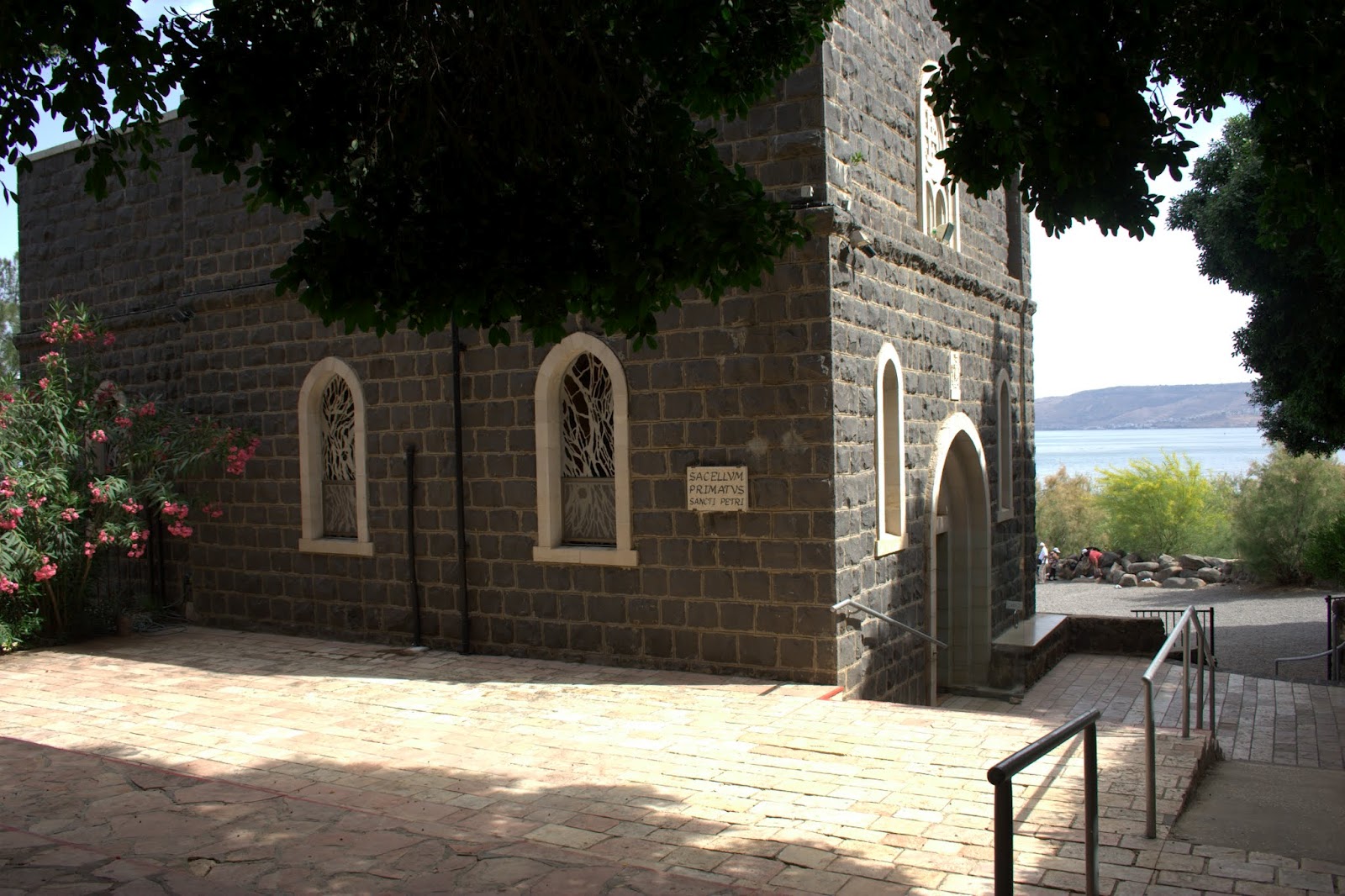 That concluded our church marathon for the day, and we returned to the hotel in Tiberias for a bit of rest. But since it was Friday, we decided to try to attend a Shabbat service at a local synagogue before dinner. Craig had tried to get our tour company to arrange this for us, but they hadn’t followed through, so having seen a small synagogue nearby, we had Ibrahim, our guide, ask if it would be all right for us to come to the service. There was a miscommunication about the time of the service, so we ended up wandering down to downtown Tiberias on the lakefront for half an hour. Finally it was time for the service to begin, and we went in; this was indeed a very small synagogue, with hardly enough room for all of us women to find a seat in the separate lean-to area for women (there was only one woman at the service). Craig and Sebastian, the two males on the trip, were given seats inside, and we could see in through several windows. There were no prayer books in English, so we mostly sat/stood silently during the service. Unfortunately, because of the miscommunication about the time, we realized after about an hour that we were going to miss dinner unless we left - and so Craig signalled to us that it was time to go. I think we were all disappointed that we had to leave in the middle of the service, and hoped that we didn’t offend anyone. Craig was especially disappointed that we were not able to schedule this better, since he of course didn’t want to offend anyone or disrupt the service. In any event, we can say we attended most of a Conservative (possibly Orthodox) service in Israel, which is probably more than most Christian tourists can say! The service itself wasn’t much different from the one I attended in Brazil with the family of a friend, where similarly the men led the service and the women sat separately but followed along with the prayers. This service was different in that an especially enthusiastic young man, probably not yet a teenager, seemed intent on being the loudest singer and most vigorous bow-er of the entire group of congregants - some of our group members said afterward that they thought he was leading the service! 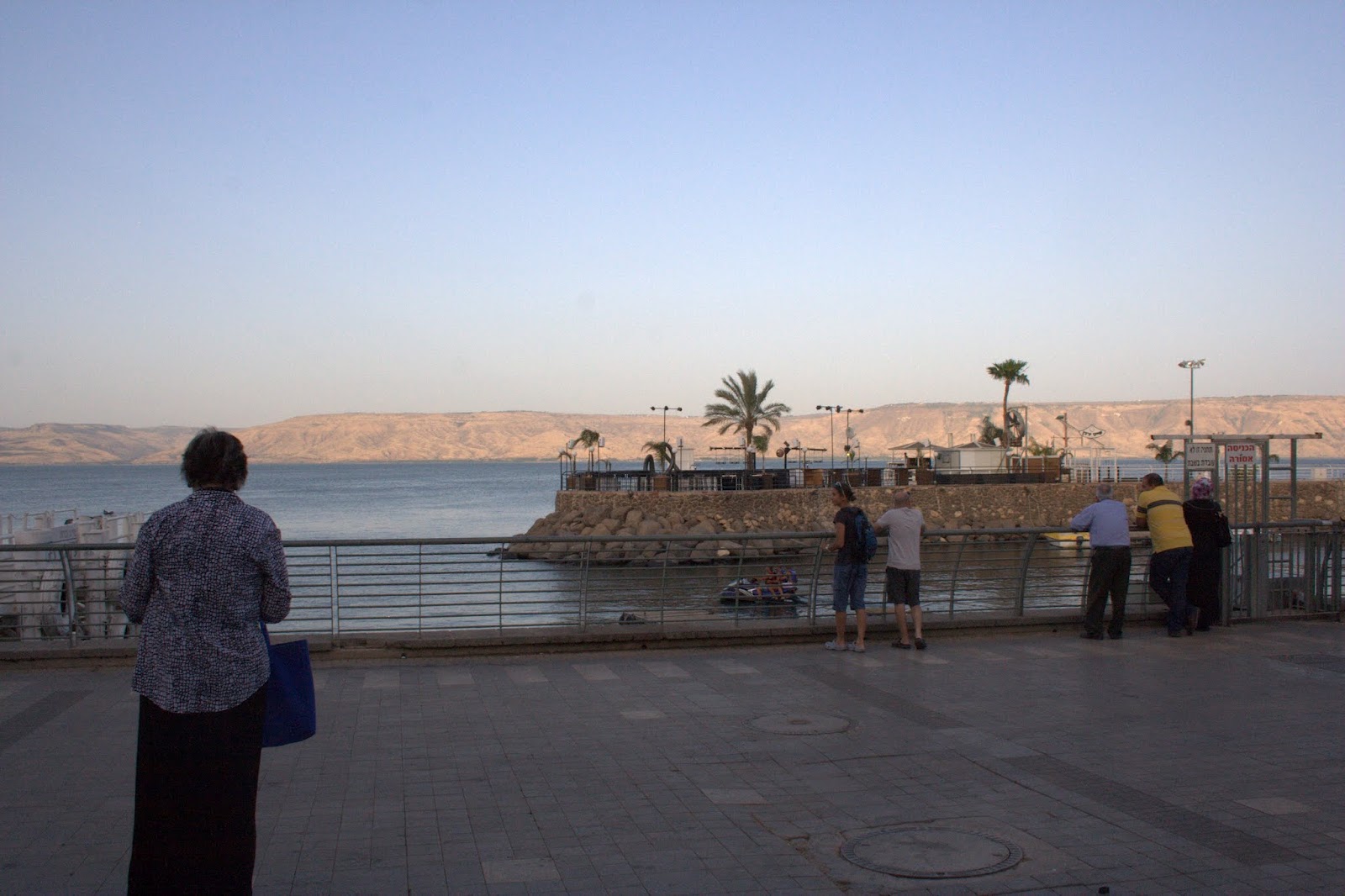