Saturday was another sight-seeing day, with one meeting thrown in. We visited more sites in the Galilee region before finishing the day in Jerusalem, where we spent the rest of the nights of the trip. First off we visited the Church of the Wedding at Cana (Kufr Kanna), also known as the First Miracle Church or the Marriage Church. As usual, there is a more recent church sitting on top of Byzantine and Crusader churches. This one was less interesting than usual, though, with a hunk of stone (what’s left of a water jar) as its main attraction. The most interesting part was all the money thrown into the different parts of the church - into the water jar, onto the rocks around the foundations, into a pit of some kind (not sure what it was), etc. There were also places where people had tucked photos of themselves or their children to bring luck or healing, according to our guide, since this church commemorates a wedding. 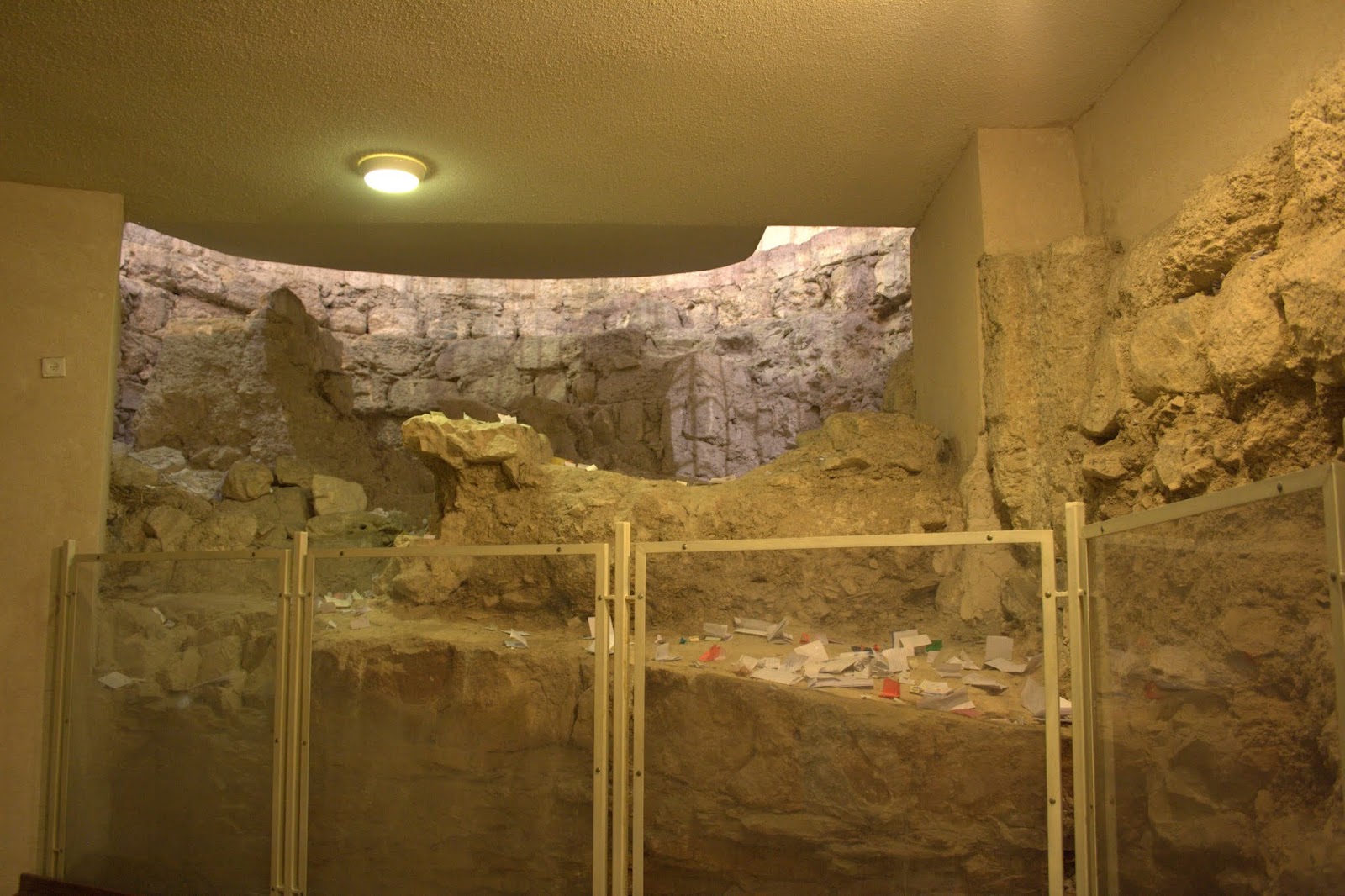 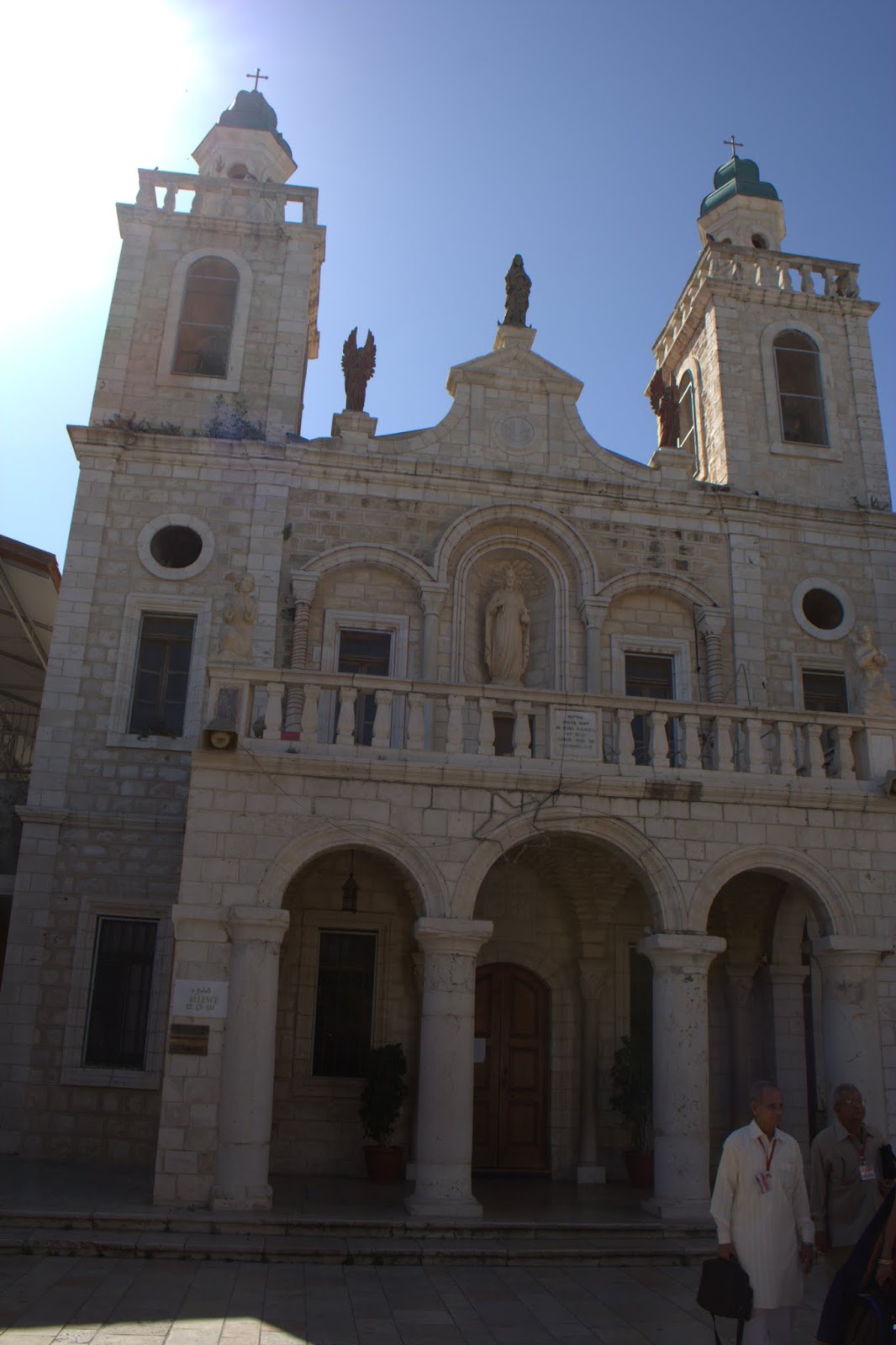 Our next stop was at Sindyanna of Galilee, a really neat organization of Palestinian Muslim and Israeli women. Sindyanna is a co-op where all the production, including packaging, bottling, etc, is done by women; they produce spices, olive oil, soap, and baskets, and train women to weave the baskets at home since many women are not comfortable working outside their homes. We spoke with two of the women who work there, with Ibrahim as our translator, and watched a short film they have about the work. They weave baskets out of the leftover branches of the date palms after the dates are harvested, and the baskets were really quite beautiful! But I didn’t have any room in my suitcase to bring them home with me. The woman we spoke with said that one of their missions is to bring Israeli and Palestinian women together, and that they manage to do this more or less successfully, while trying to raise awareness among the Israeli women of what life is like for Palestinians. I was impressed with their courage and goodwill in trying to work together with Israelis while challenging them to acknowledge the effects of the occupation. 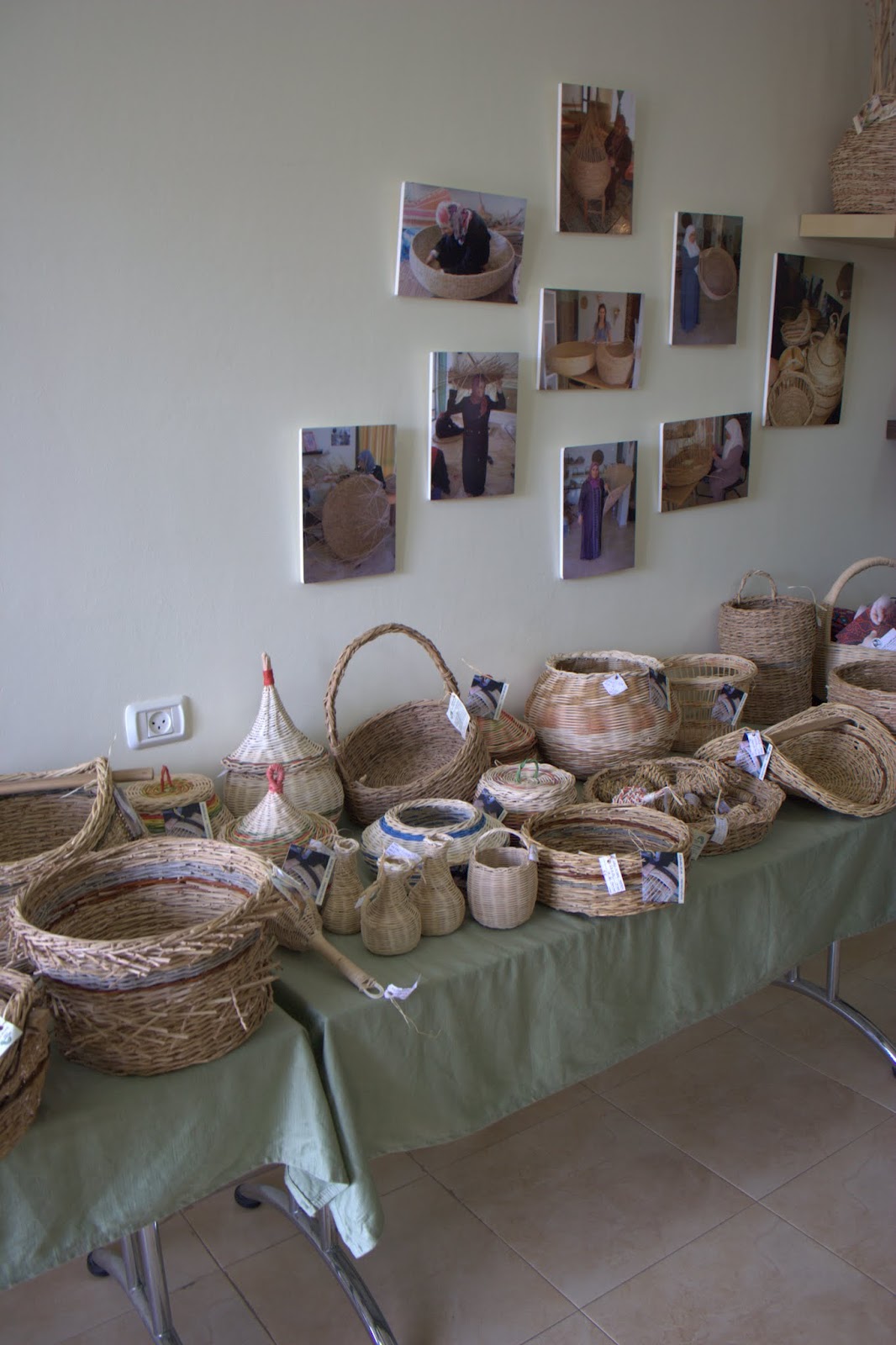 We dragged ourselves out of the basket shop and went on to Bet She’an, yet another well-preserved Roman city, this one much better-preserved even than Caesarea. And unlike Caesarea, it hasn’t been “restored” extensively. If I hadn’t been feeling sick (and if we had had the time, and if it hadn’t been so hot) I could have spent the entire day there, looking at the theater, baths, colonnaded streets, temples, etc, and climbing up to the look-out point. As it was, I had time to take a quick look at the theater and baths and then had to rest - my cold was making me feel pretty awful. Unfortunately also while we were there we learned that an older American man had somehow gotten lost from his group while visiting the site the day before, and the Israeli military had come out to find him, but to no avail. They were still searching while we were there. We learned a few days later, when his body was found, that he had somehow wandered away to an industrial area and gotten locked (or collapsed) in a shed. Our thoughts and prayers were with his family during the days that we waited to find out what had happened, and our condolences go to his family. 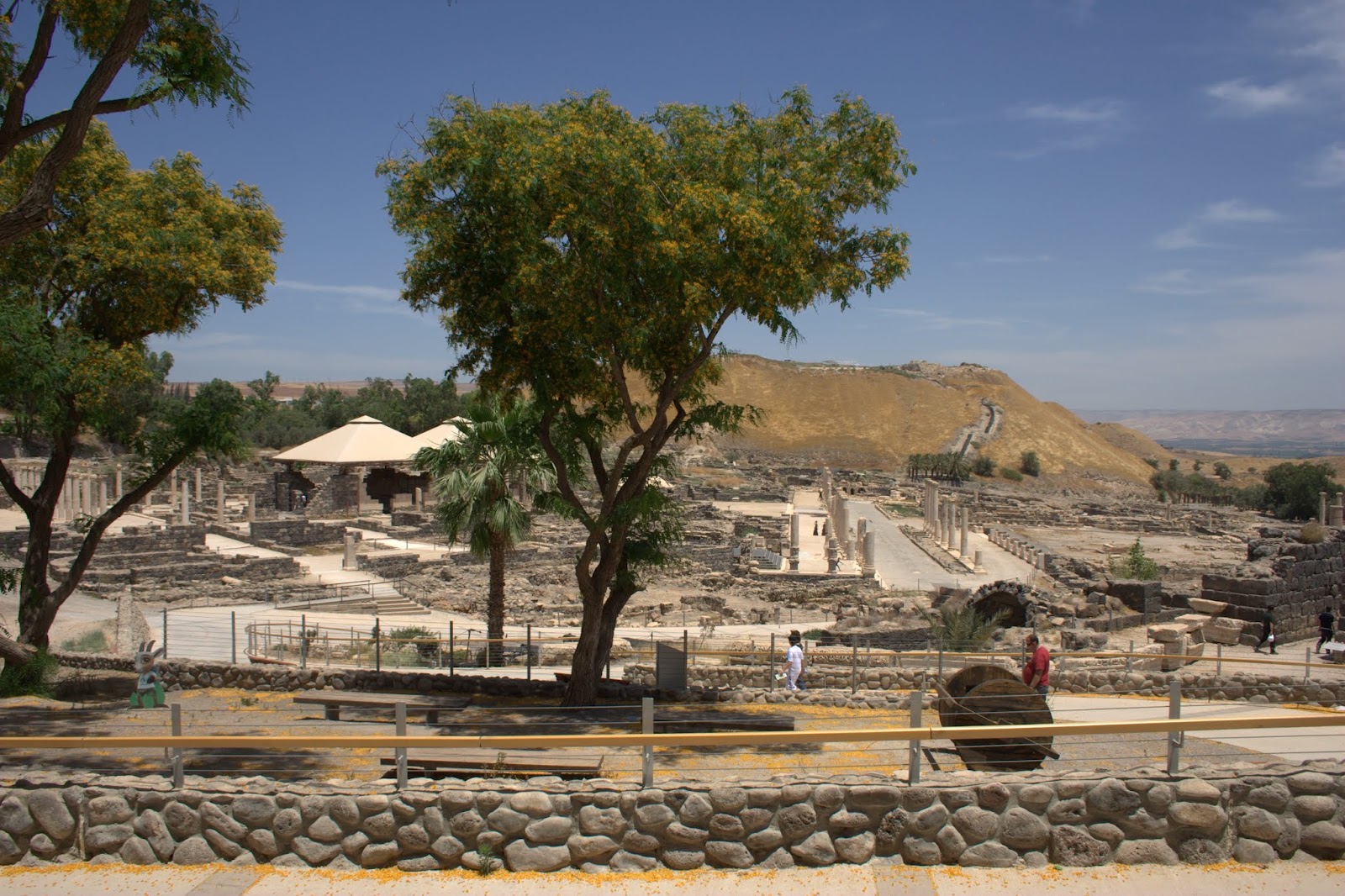 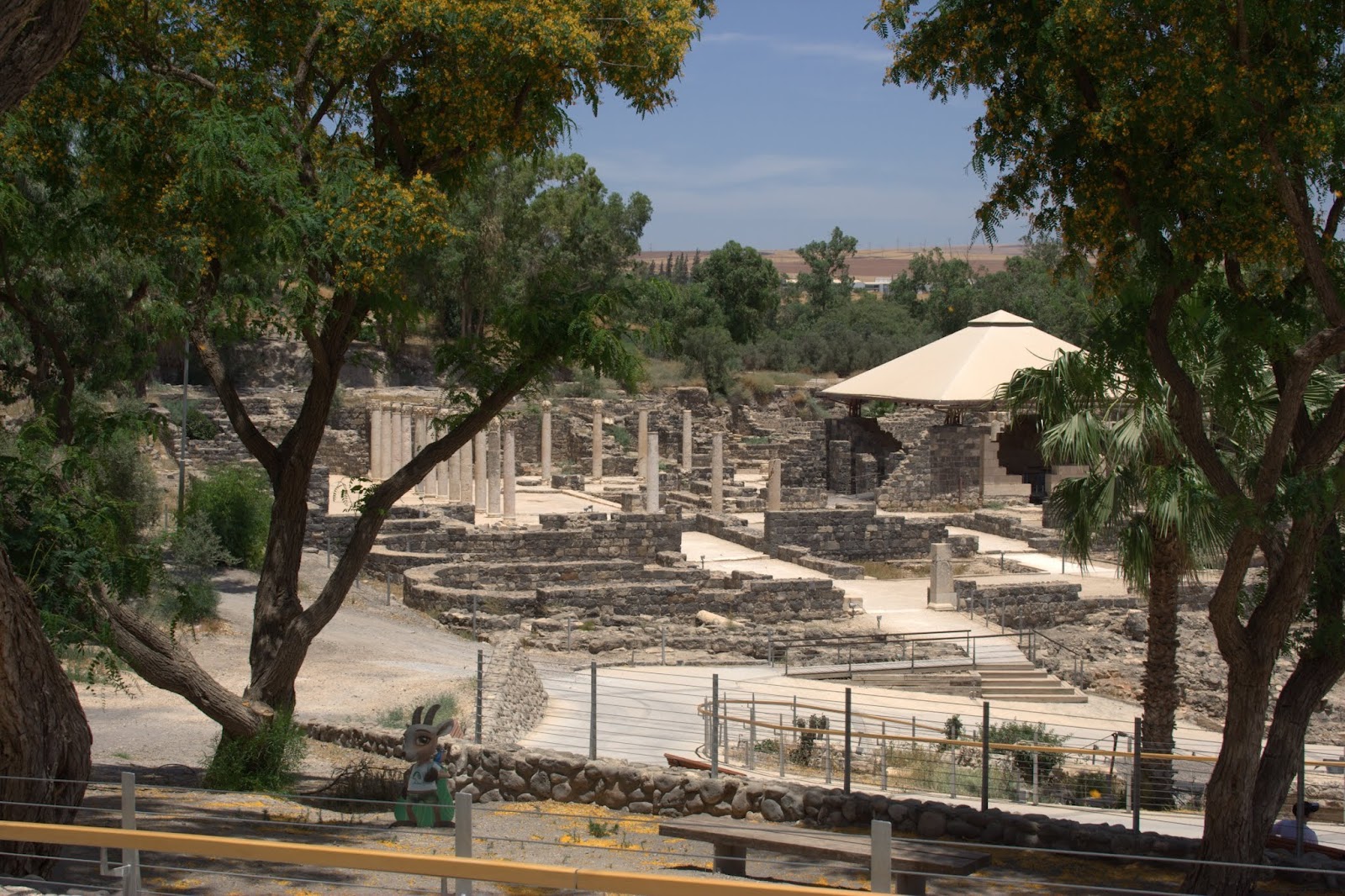 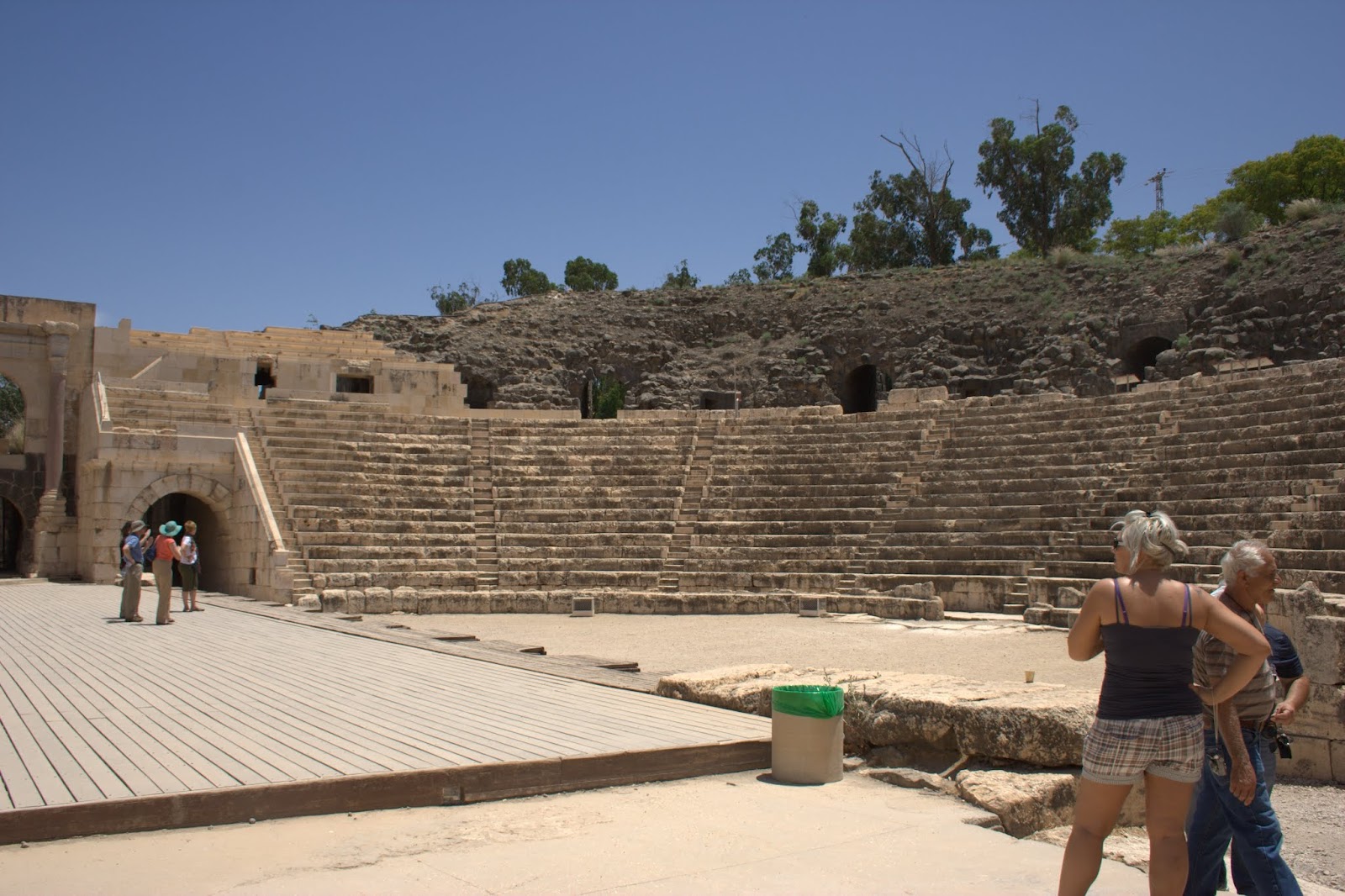 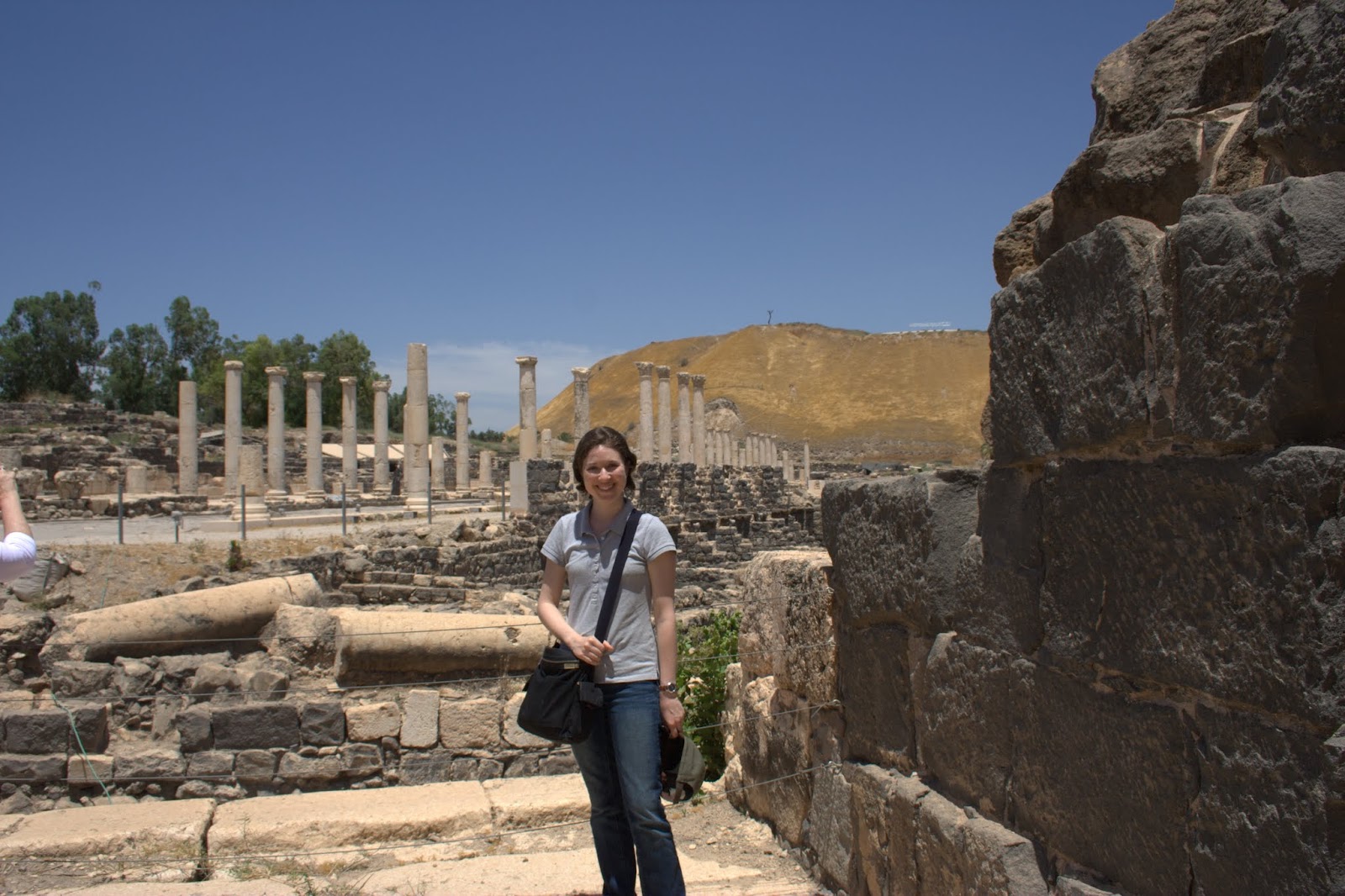 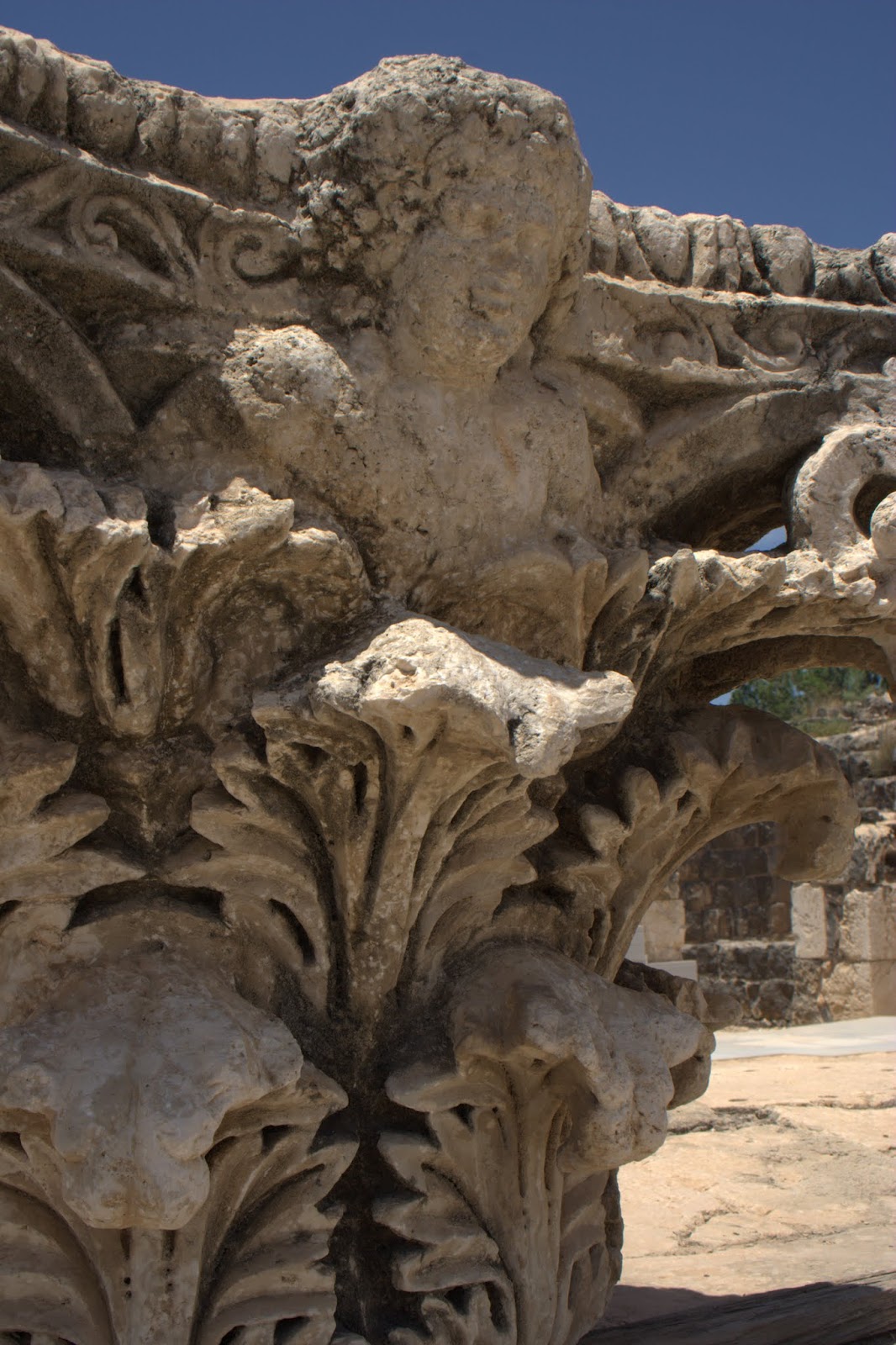 Feeling mixed emotions, we left Bet She’an and went on to Jericho. We did a “drive by” of Zacchaeus' sycamore tree, (more potential tree options listed here) which has been restored? replanted? recreated? on the grounds of a very large church paid for by Vladimir Putin for the Russian Orthodox Church, and then drove to a look-out point to see the Greek Orthodox Church/Monastery of the Temptation, also known as Mt. Temptation, from afar. There’s something right below the monastery on the mountain that has a cable car going up to it, which kind of spoils the effect of the monastery perched high on a mountain - no longer so inaccessible - so this was one of the less convincing sites. I was distracted here by the sight of some men laying rebar in preparation to pour concrete. We looked over the edge of the look-out point and discovered that the entire area we were standing on was built on concrete-filled gas drums being used as a retaining wall and foundation. The whole thing looked extremely precarious, and the man was literally throwing the rebar around on the ground, not bothering to position it in any logical way. I just hope the whole hillside doesn’t give way! But then again, excellent retaining walls can be made out of tires or other rubbish filled with concrete, so perhaps it’s sturdier than it looks. Let’s hope so. Did I mention there was also a camel? You know, for camel rides. Since that’s clearly why a group of tourists would drive to this look-out point: for the camel rides. 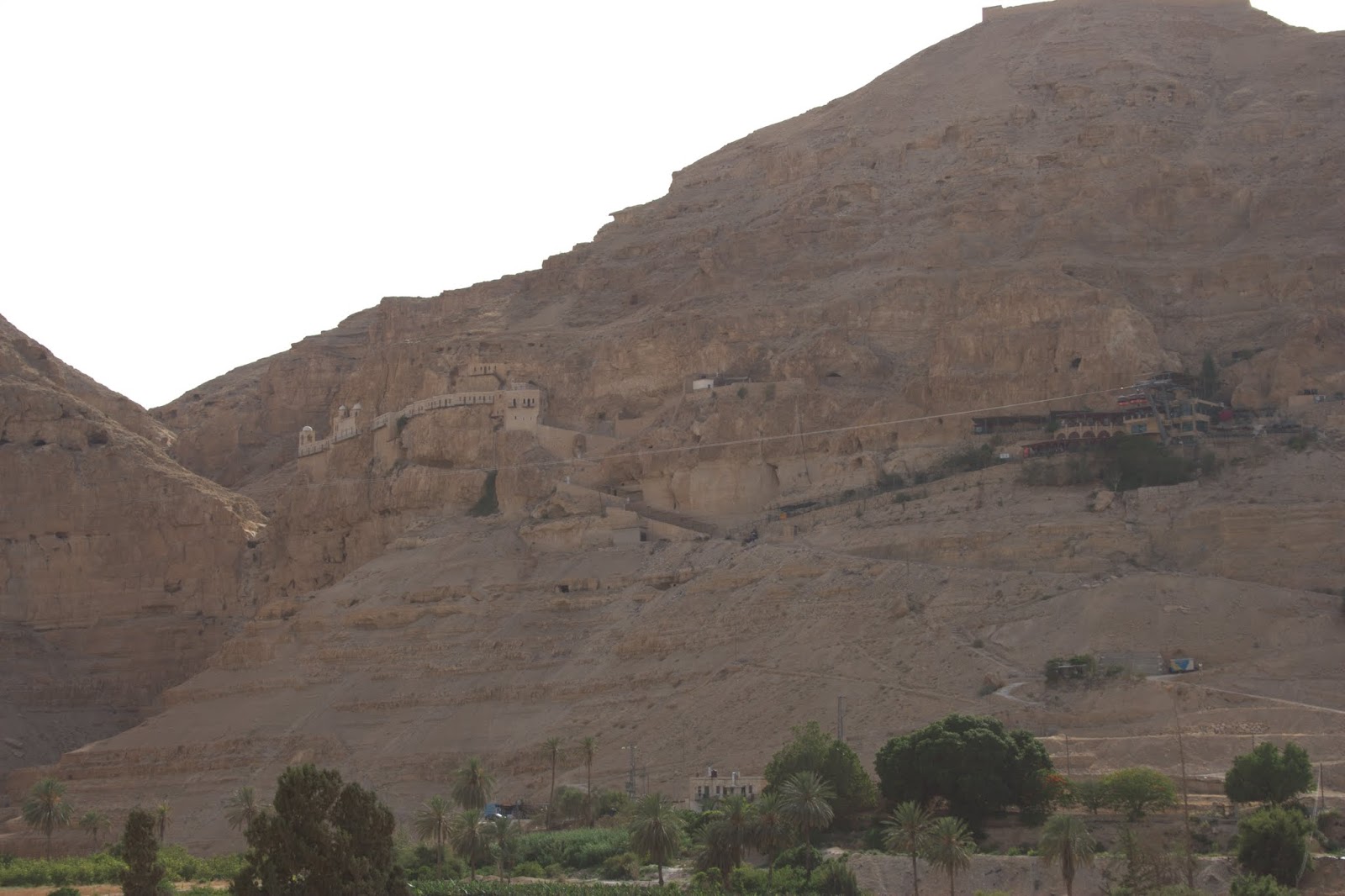 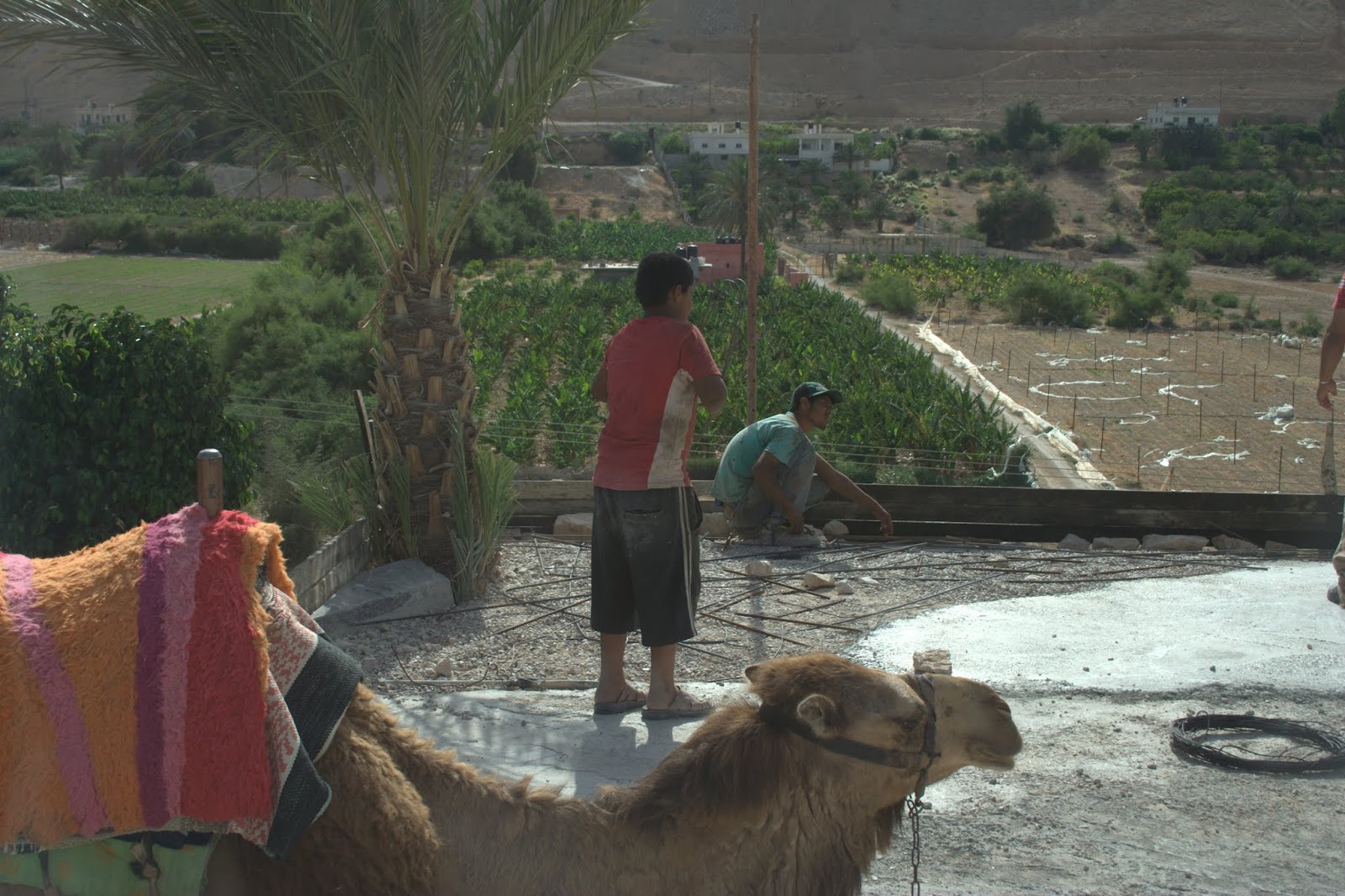 After these two detours we made a real stop at the old city of Jericho, which I’m sure Ibrahim would want me to point out is still being excavated and doesn’t have any good literature published on it yet and so what we saw was still speculative. What we saw was piles of rocks and dirt, so I don’t feel like I was too misled by visiting it before its official write-up has been made public. From the top of this giant dirt pile we could see the city, including a shepherd directing a lot of goats and sheep down a road with cars nearby. Jericho is built around a spring, a desert oasis, and so is apparently now a resort area for Israelis. I couldn’t figure out why, since it’s not really much of a city, there’s limited water, and it seems kind of run down, except for the cable car. But to each his own resort town, I suppose! 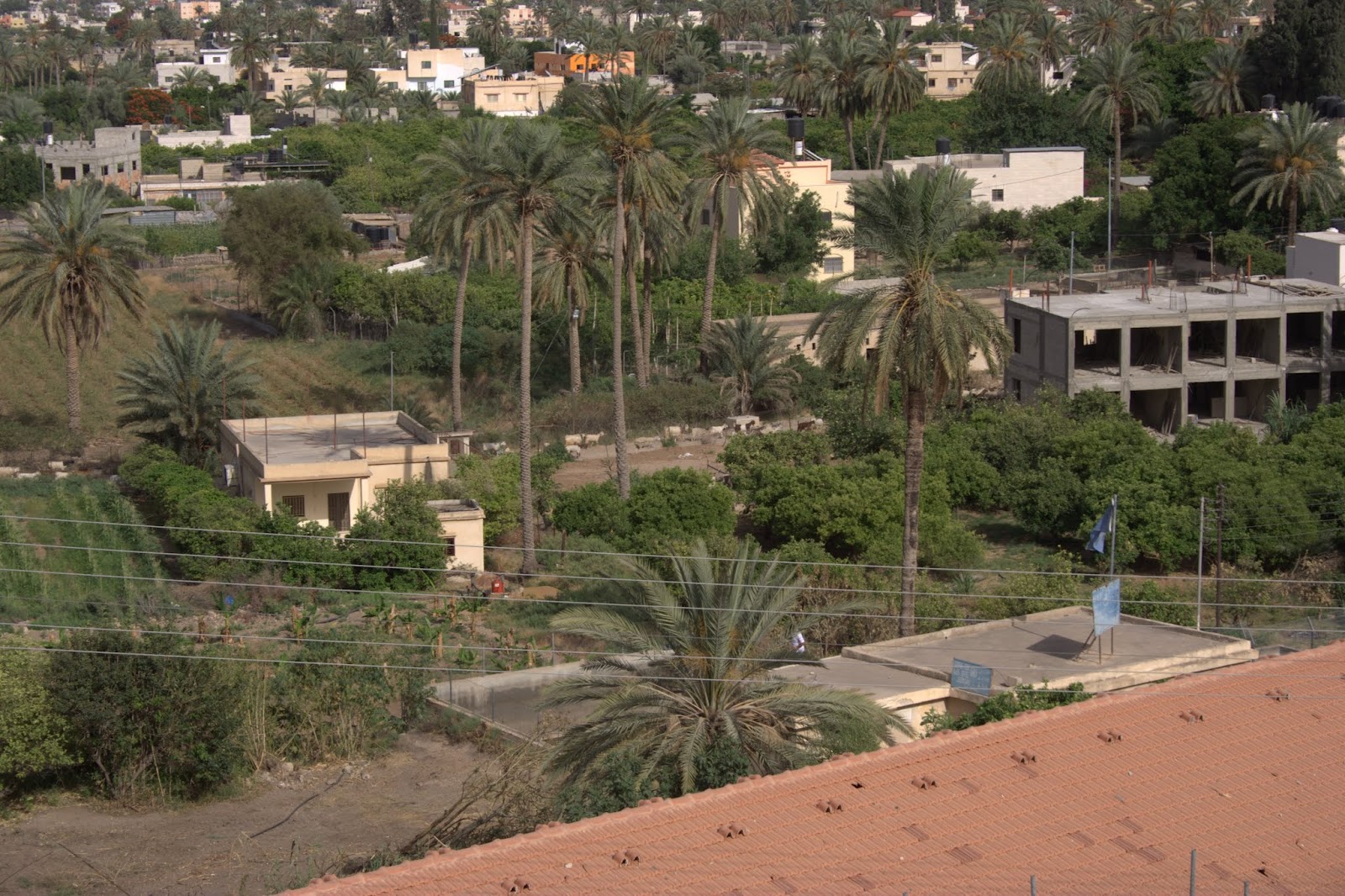 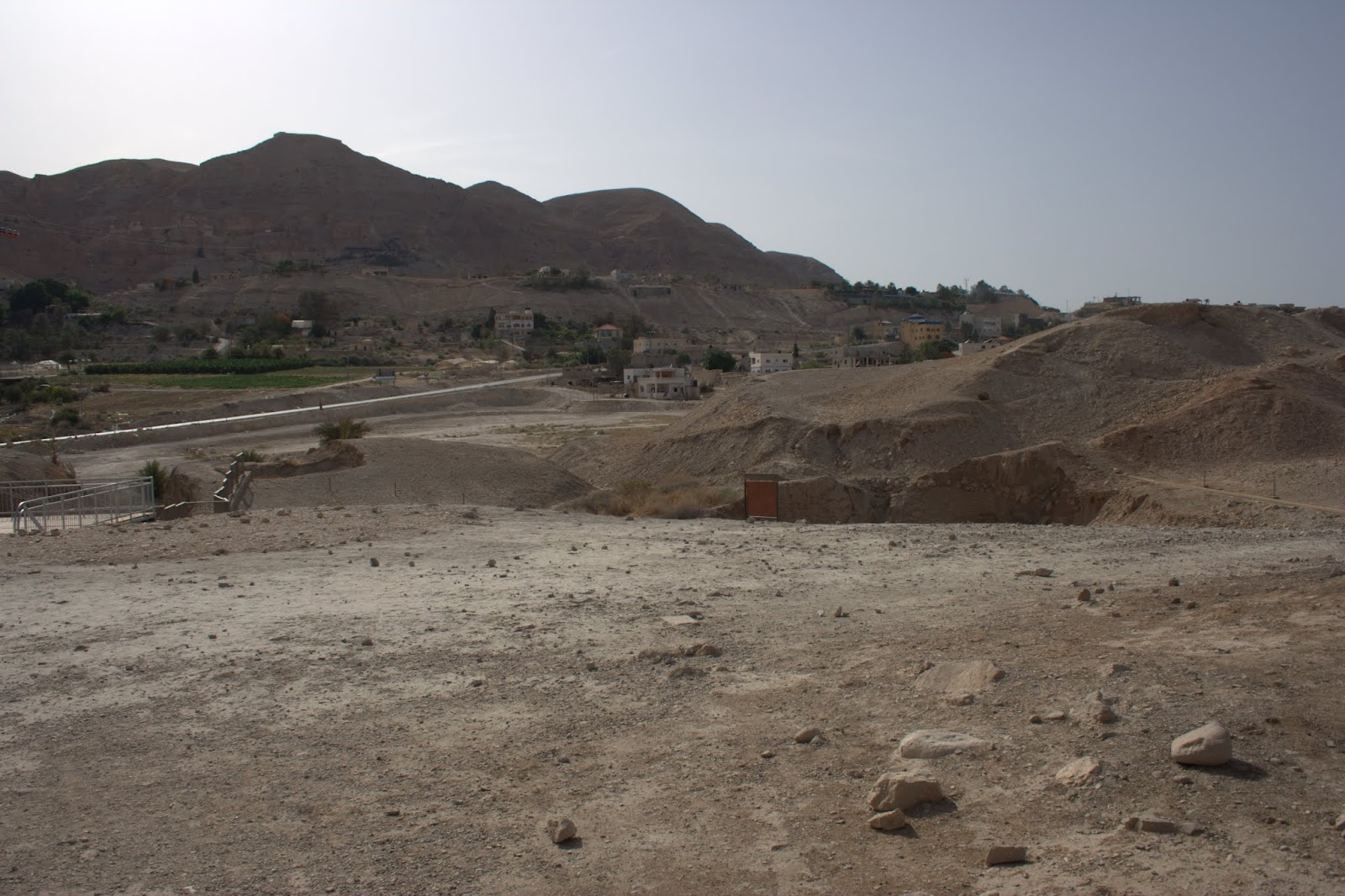 We left the dirt pile and drove, finally, to Jerusalem, where we checked in to the Knight’s Palace Hotel. This is a really cool hotel, because it feels like a crusader castle. Apparently there was a crusader building there at some point, but most of it is of more recent vintage; still, it has a great location in the Old City and coats of arms in the hallways, so what more do you need? We had dinner at the hotel, as usual, and then spent a little time walking through the city at night to get acquainted. The twisting cobblestone streets reminded me of Venice, without the water; most of the streets are too narrow for vehicles. Most of the buildings are only a few stories tall, and despite the modern veneer, the city feels old. After some ice cream and wandering, we were ready for bed and ready to start a new week’s adventures! 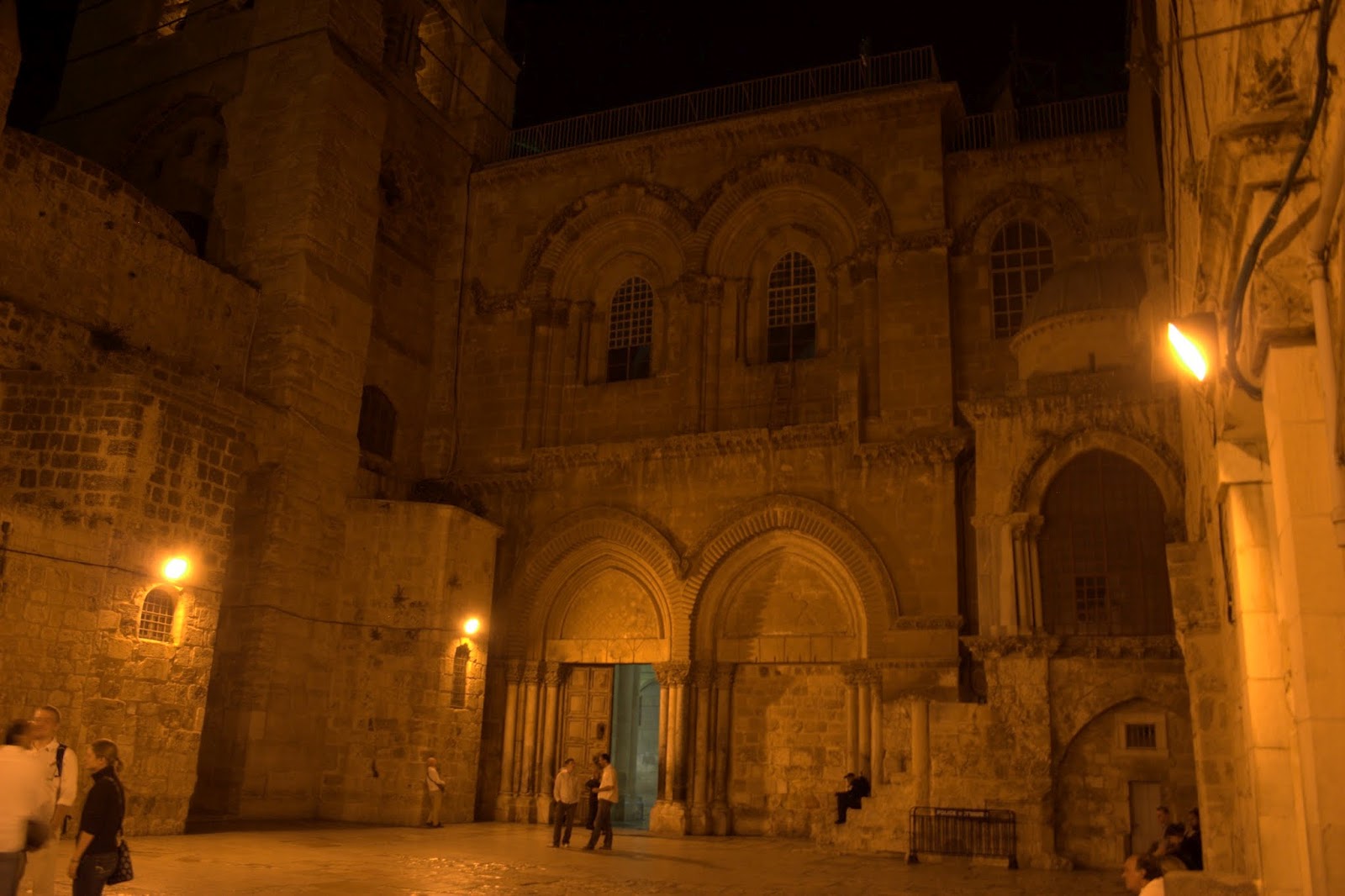