On Thursday and Friday we were able to observe perhaps the entire spectrum of Israeli thought about the occupation in the course of two days, without really intending or planning to do so. We spent the morning on a tour led by Ruth Edmonds of ICAHD, the Israeli Committee Against Housing Demolitions. ICAHD is a radical left-wing Israeli group that participates in direct action to end the occupation - that is, group members sit in front of bulldozers to prevent houses from being demolished, and assist homeowners with rebuilding their (illegal) homes. Ruth was a self-proclaimed Jewish Israeli anarchist and a strong opponent of the occupation. She directed our bus driver to various sites around the city: to a view over land that’s slated to be settled by another illegal Israeli settlement; to a demolished apartment building; to the Wall where it cuts off the road to Jericho, dividing a Palestinian neighborhood in half; to Ma’ale Adummim, the third-largest settlement and the one furthest inside the Green Line, which looks and feels entirely like an ordinary suburb, except for the limited access roads and soldiers; and more. Ruth even advocated for BDS (boycott, divestment, sanctions) of Israeli state-sponsored and settlement products, which is extremely contentious for an Israeli to support. She drew the line at a blanket boycott, however, urging interested people to permit Israeli intellectual and cultural trade as long as it does not aid the occupation. 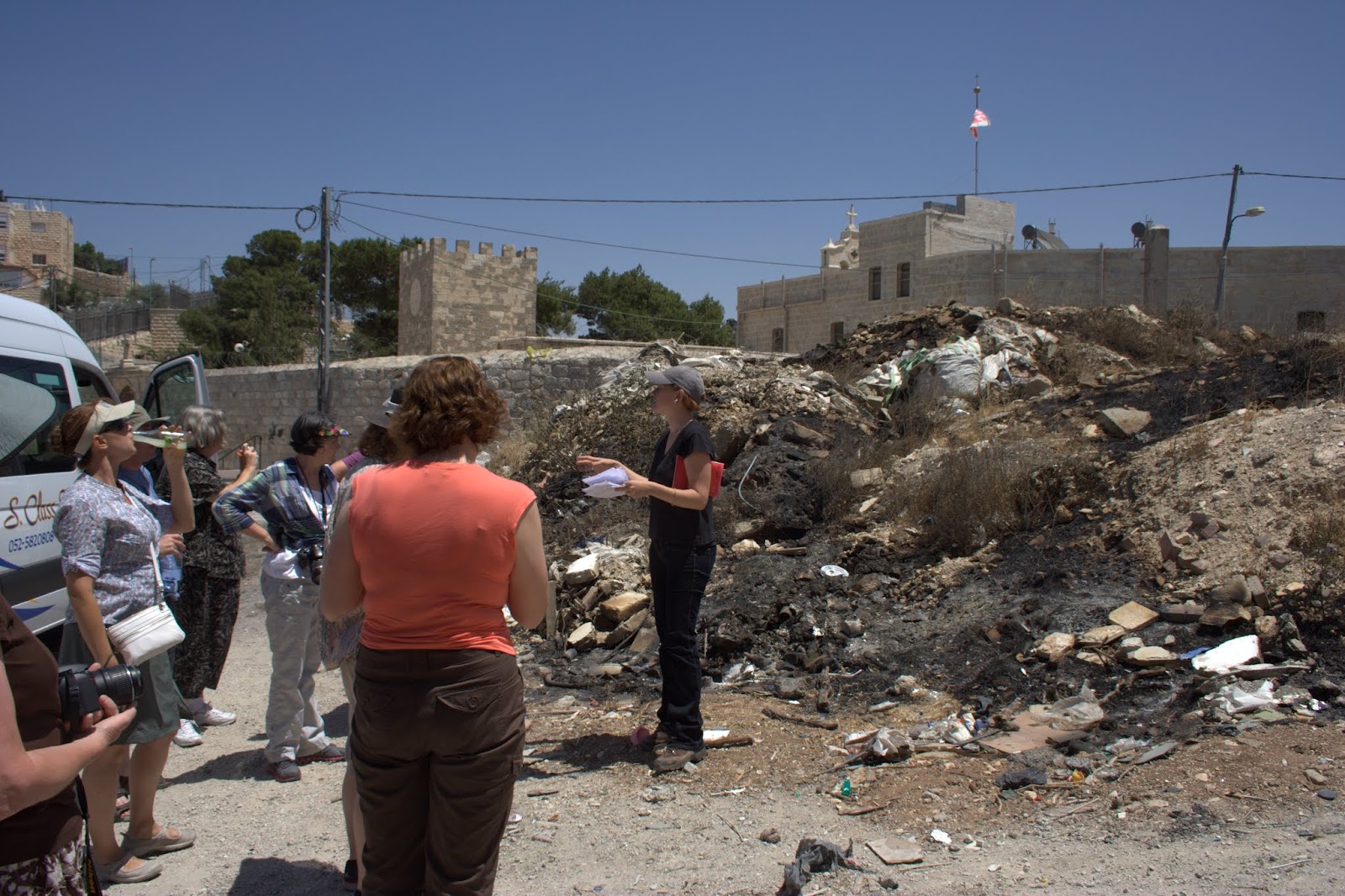 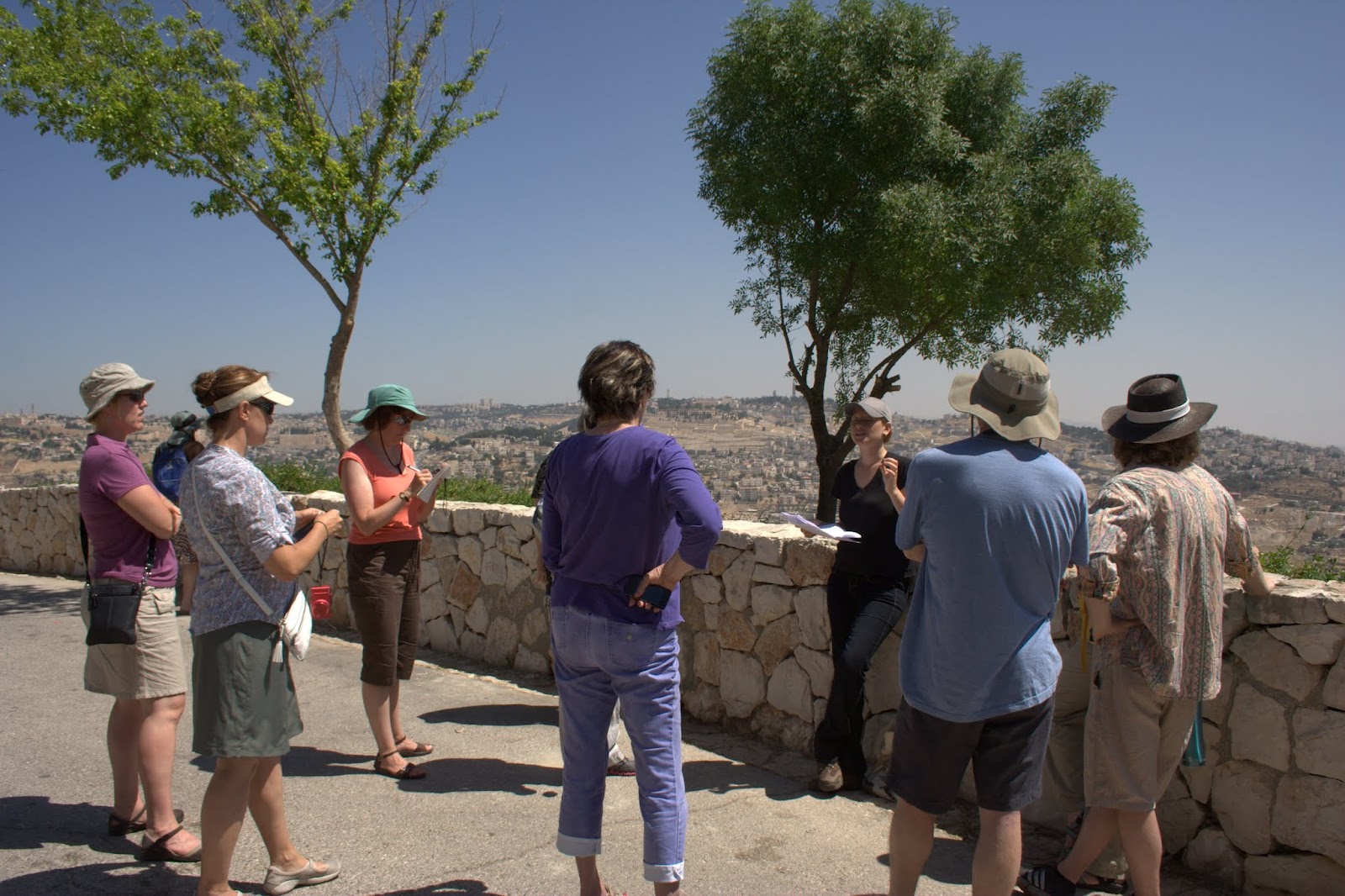 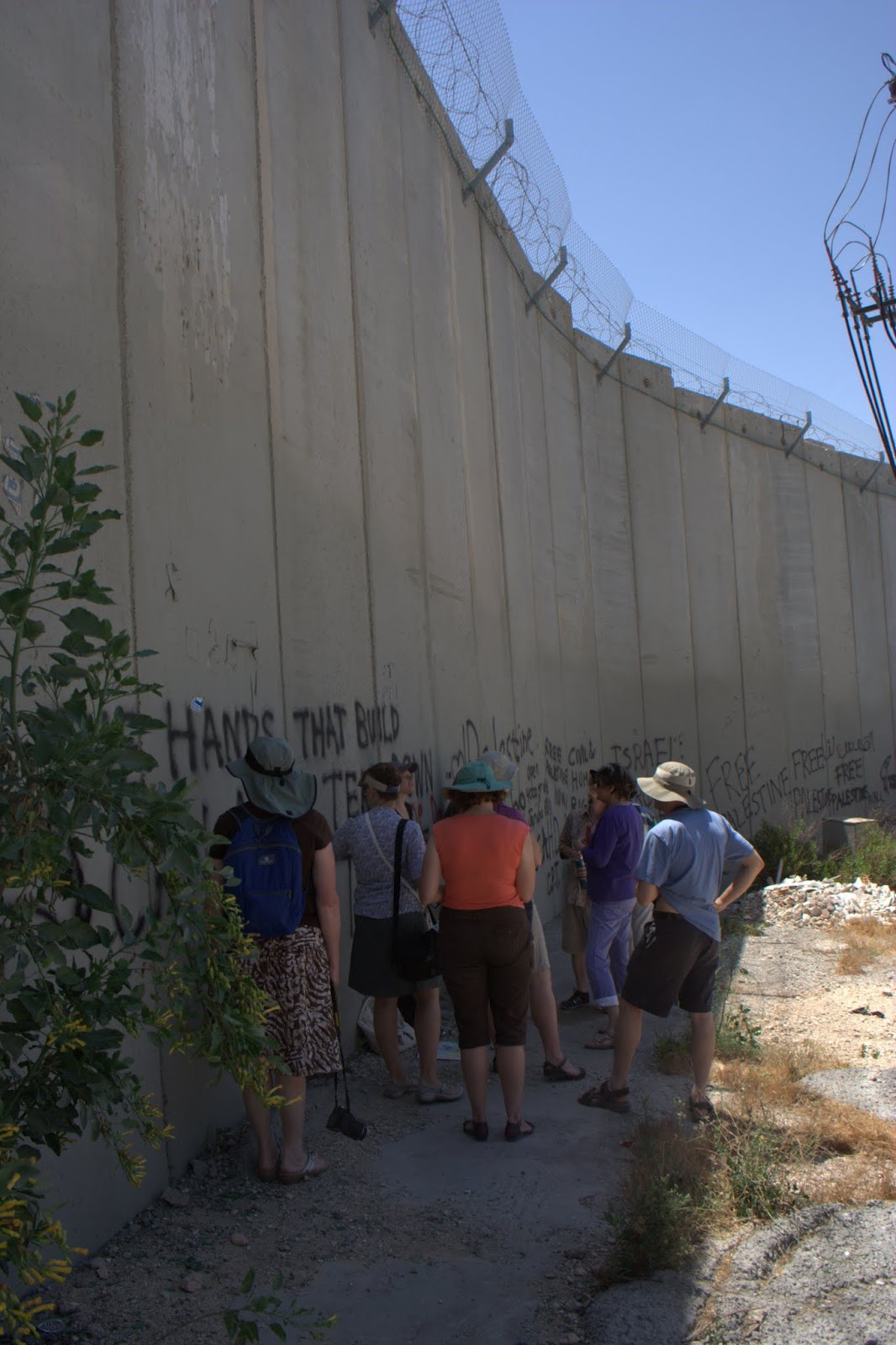 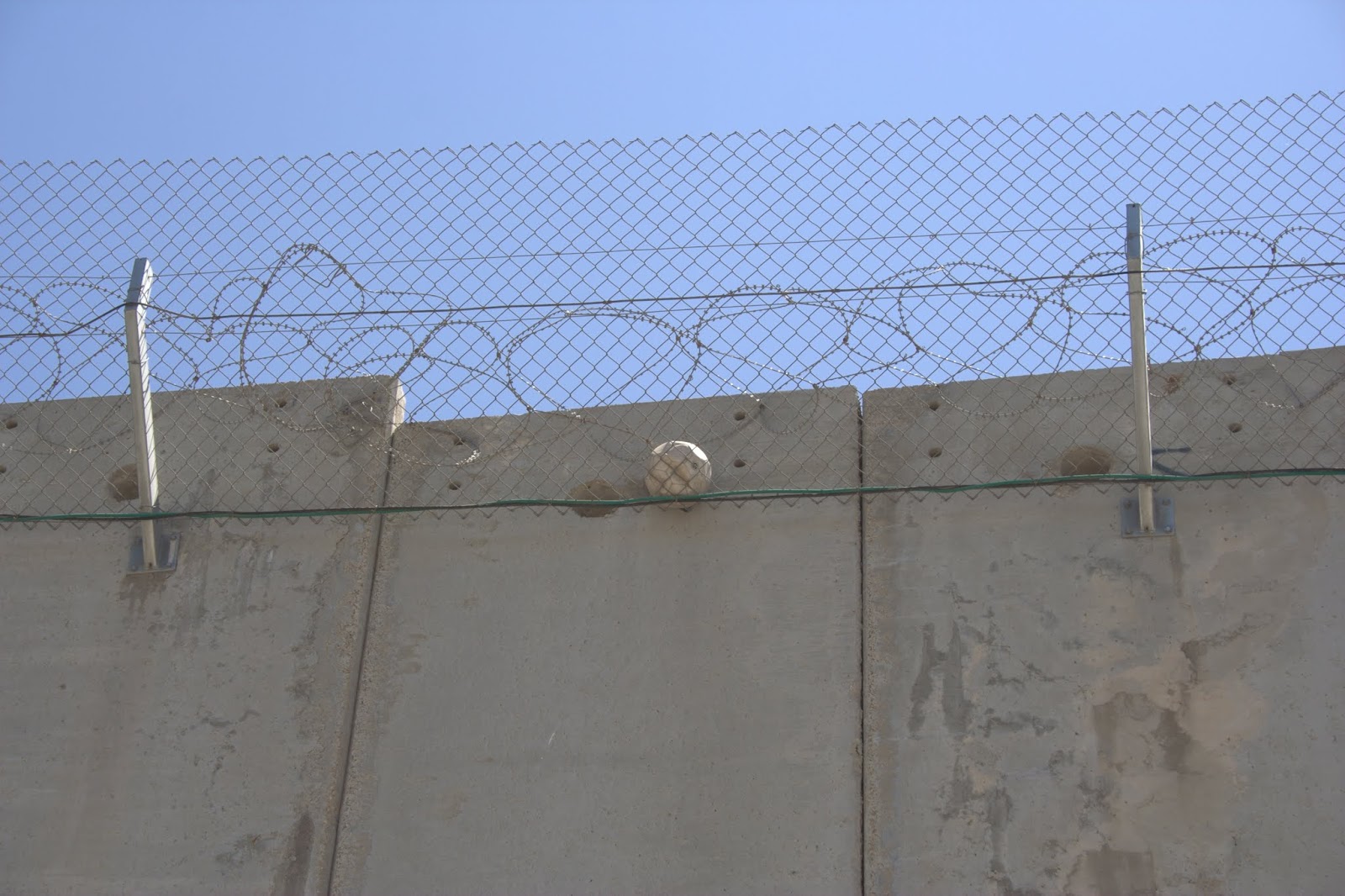 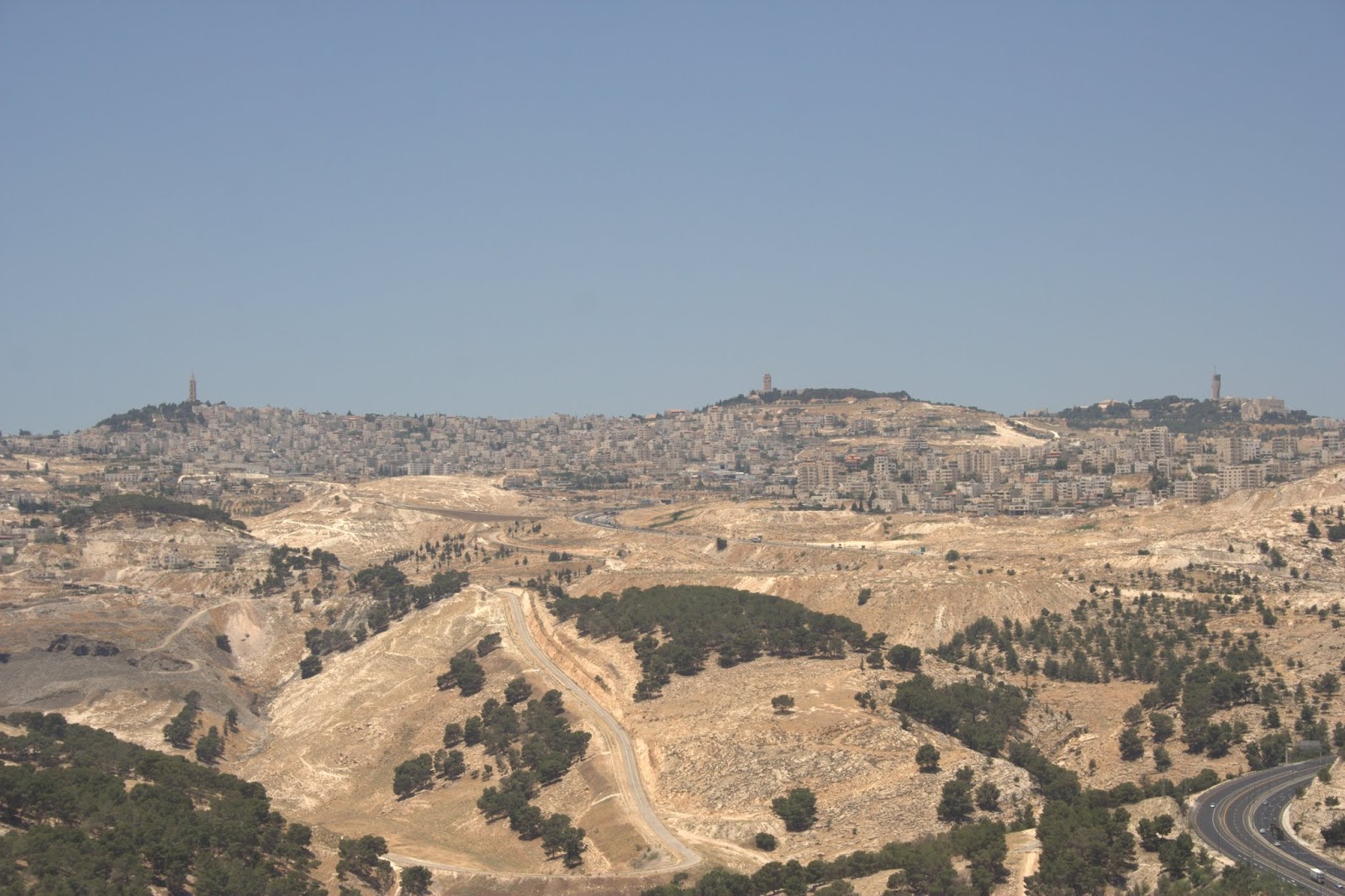 After our tour with Ruth, we had lunch at a food court in a random mall in East Jerusalem. To go in to the mall, one must pass by guards and through a metal detector. But inside this suburban-style, air-conditioned, multi-story shopping mall, there were youths in t-shirts and shorts walking around with machine guns slung across their backs, clearly not part of mall security, but just hanging out. I don’t understand the point of the metal detectors if you can bring your automatic weapon inside… Very strange. Other than that, it looked like your average American mall. The food was decent (pizza with sweet potato on it? not bad!). I count this as the “neutral” portion of our visit to Israel that day, where probably no one was thinking about the occupation, and we ourselves were mostly interested in looking for women wearing wigs over their real hair that exactly resembled their real hair. Apparently this is an option for women who don’t want to wear scarves but want to cover their hair. (We saw several women doing this, for the record.)

Following lunch we visited the Holocaust History Museum at Yad Vashem, built by Moshe Safdie and opened in 2005, replacing an older 1960s building. I wish they would have let me take pictures inside because the building was beautiful. I wrote in my notes, “spare but not brutal, sufficiently monumental” - a concrete bar dug into the hillside and projecting out at one end into space. The museum was full of multimedia presentations, screens with interviews of survivors, personal effects, artwork, etc, trying to present what happened from a multitude of viewpoints. There were clusters of Israeli soldiers there apparently on tour, perhaps as part of their training or education. As I walked through the exhibits, I couldn’t help but think about the similarities between the ghettoization of Jews during WWII and the present ghettoization of Palestinians into areas A and B, surrounded by walls and checkpoints, soldiers and guns… 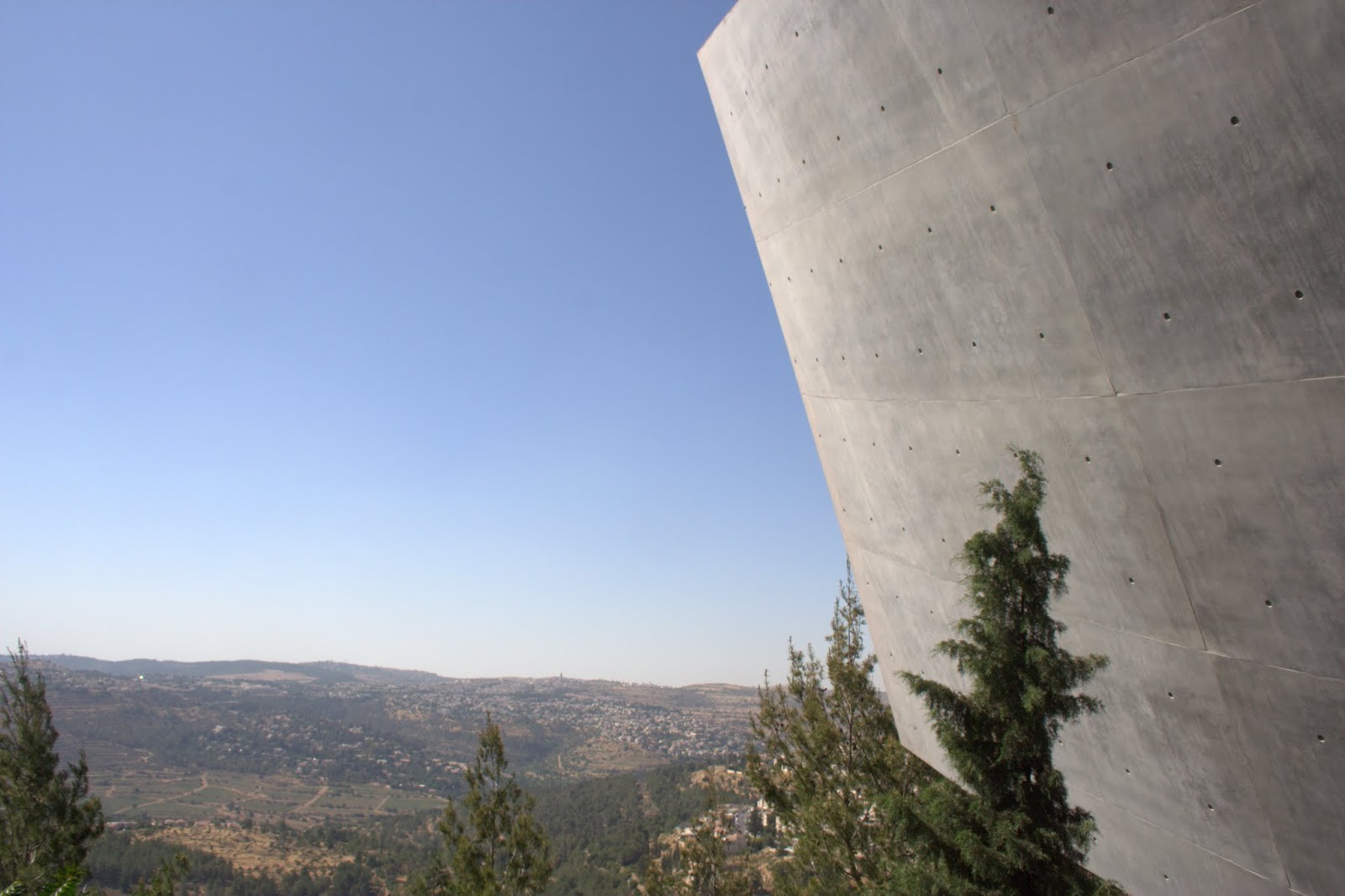 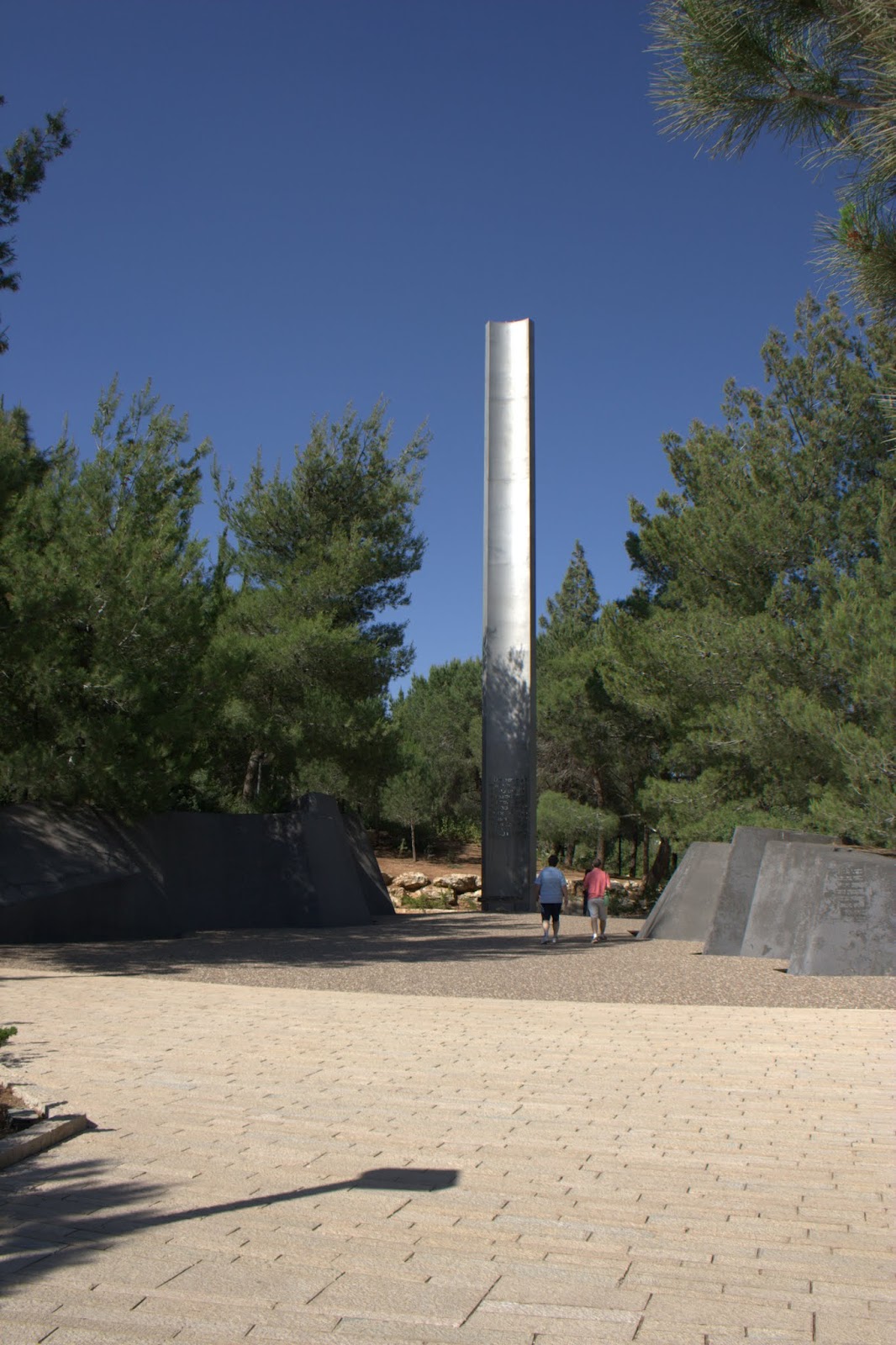 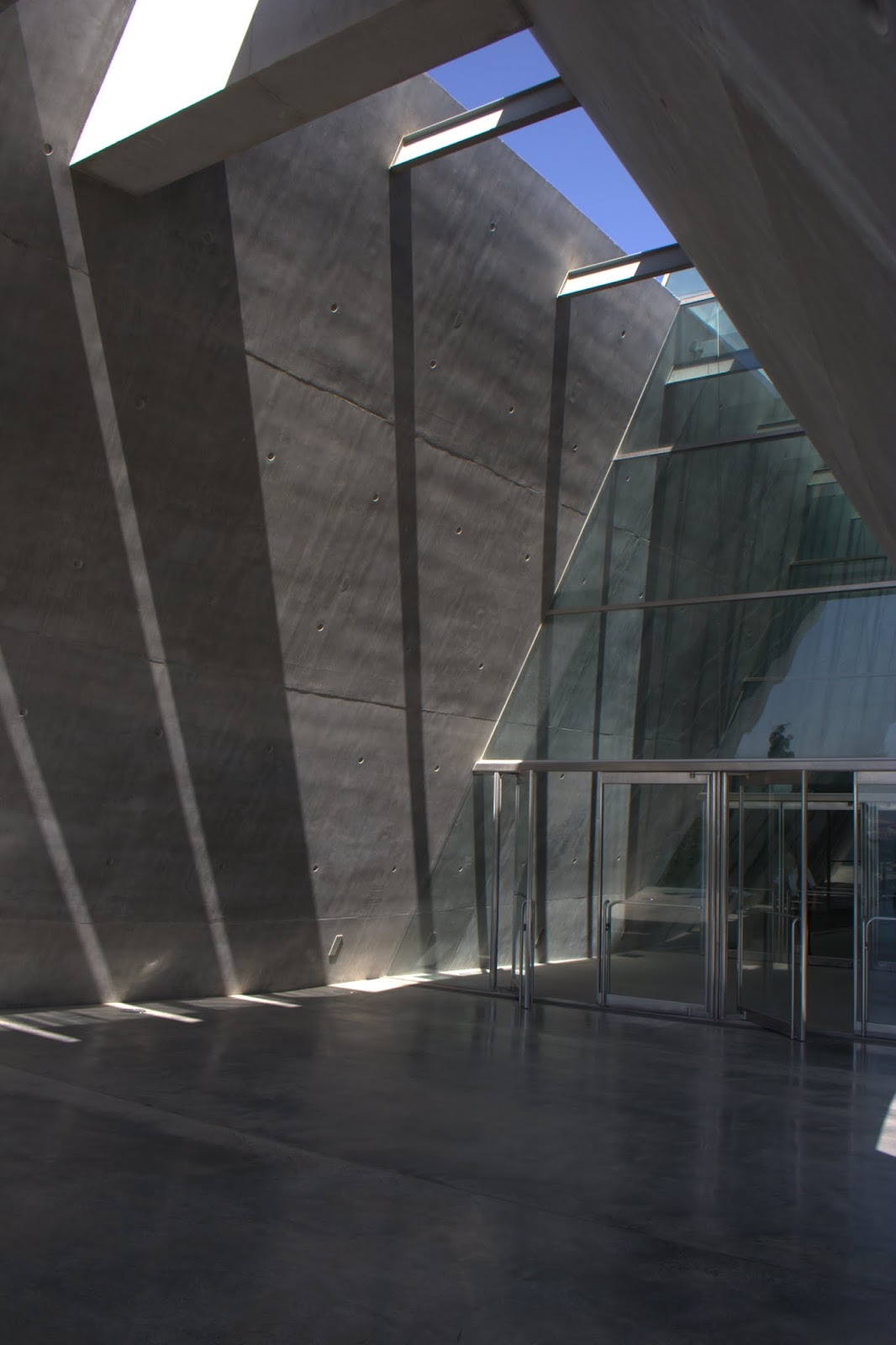 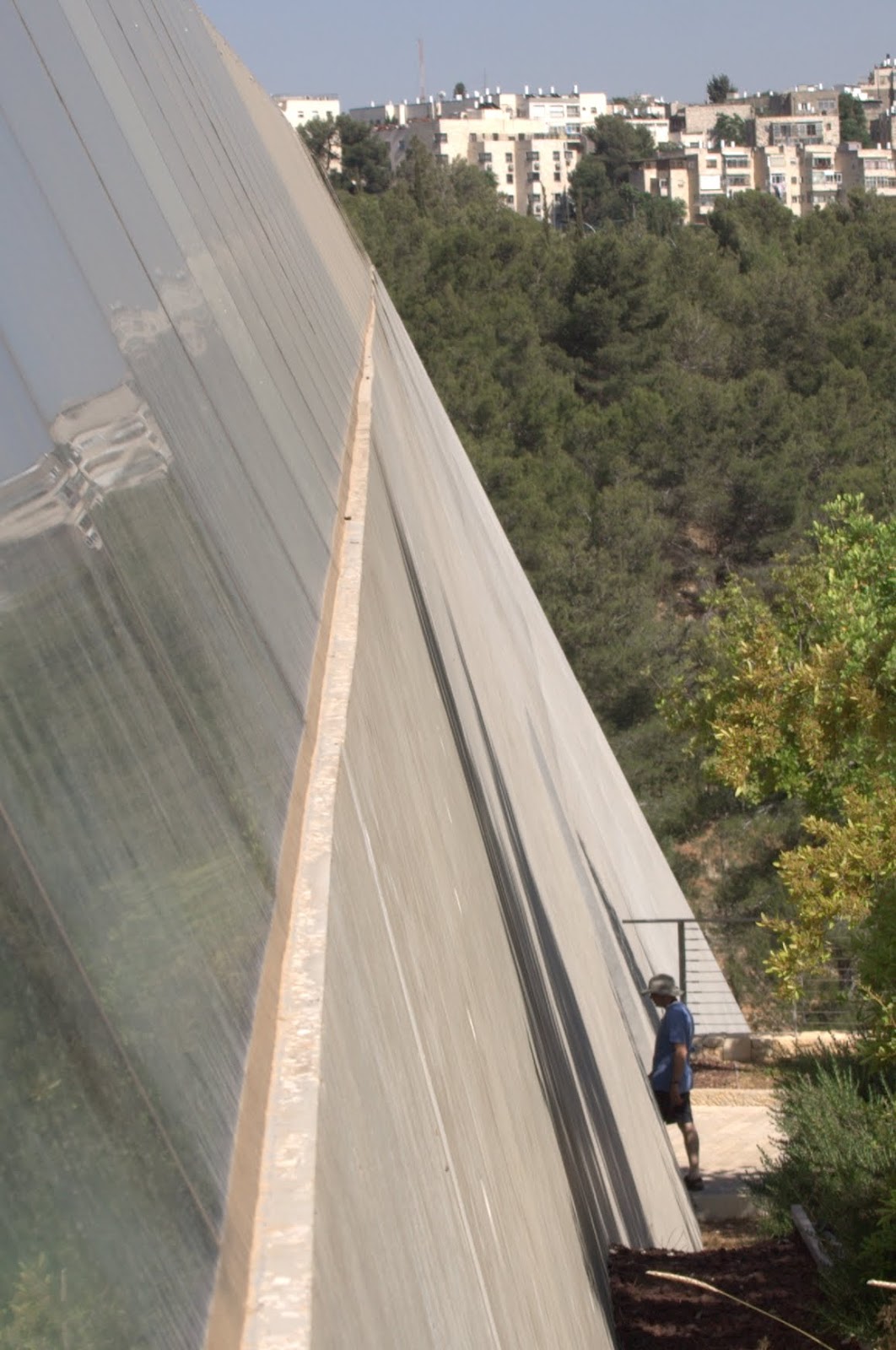 This was a tough day.

Our final day together as a group. The morning was some rapid-fire sightseeing, followed by a difficult afternoon to conclude our “tour of viewpoints” regarding the conflict. We were up early to visit the Armenian quarter and Mt. Zion, beginning with the Syriac Orthodox church of the Last Supper (aka Monastery of St. Mark). This was the first of two churches we visited commemorating the Last Supper. The church was itself unremarkable, including its miracle-working icon, but the little round nun who showed us around stole the show. After Ibrahim found her somewhere on the premises, she unlocked the church, ushered us in, went to the front, and proceeded to describe (in accented English) her witness of the most recent two miracles worked by the icon. She sang the Lord’s Prayer in Aramaic, allowed us to look behind the curtain concealing the altar and take “one picture,” and forbid us from crossing our legs in church or taking pictures of the icon. And that was that. Her devotion to the little church and its icon, supposedly painted by St. Luke, were amazing, and she shared her stories with gusto; I don’t think any of us will be able to forget her! 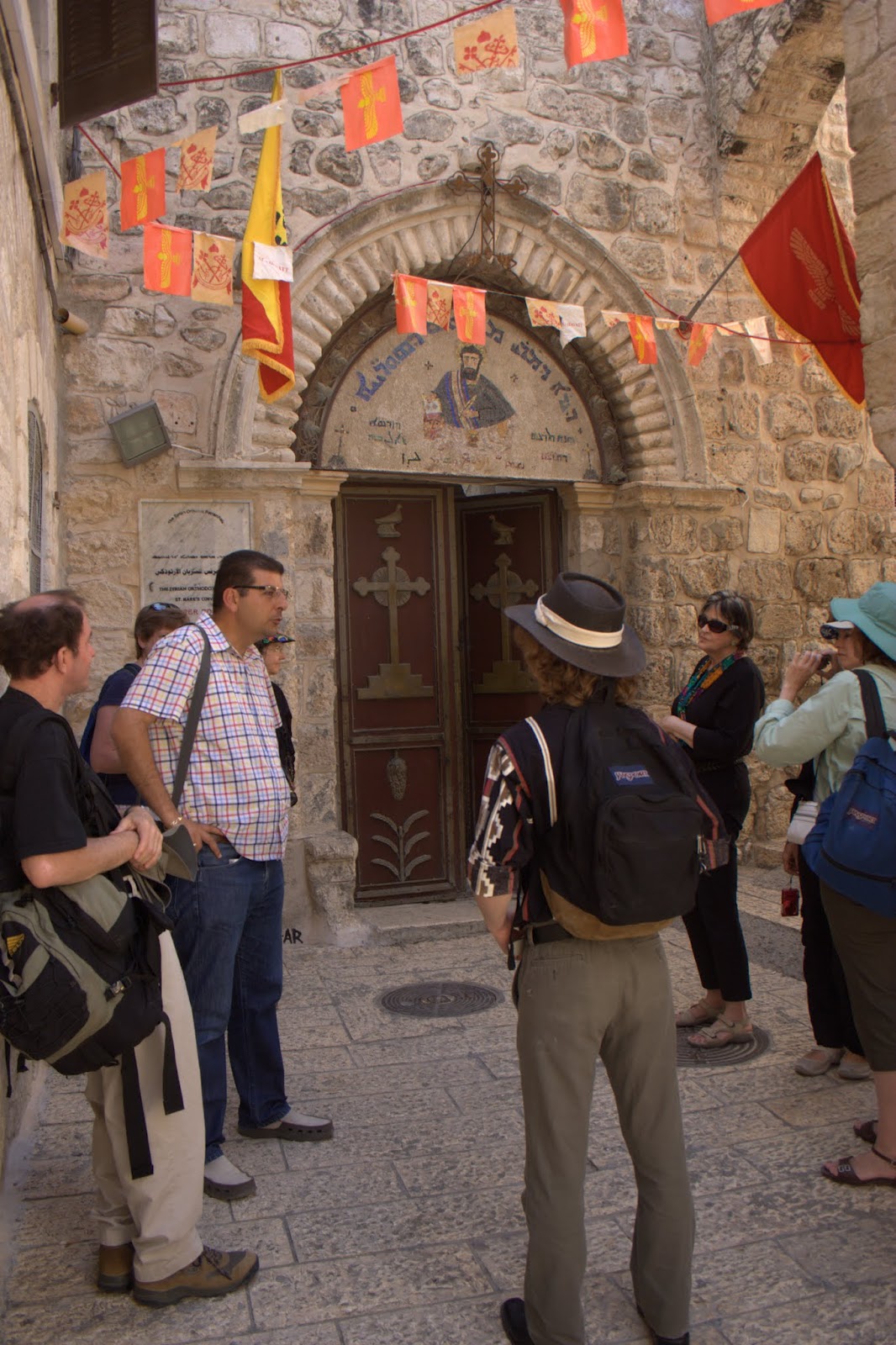 Next we walked through the Armenian quarter and out the Zion Gate to Mt. Zion. There we visited the Church of the Dormition of Mary, big and fairly nice, now a Benedictine monastery known as the Hagia Maria Sion Abbey; and the Crusader church of the Last Supper (the Cenacle, or Upper Room) with Islamic stained-glass windows and mihrab from when it was temporarily converted to a mosque, all sitting atop a current synagogue considered to be (one of the) tomb(s) of David. 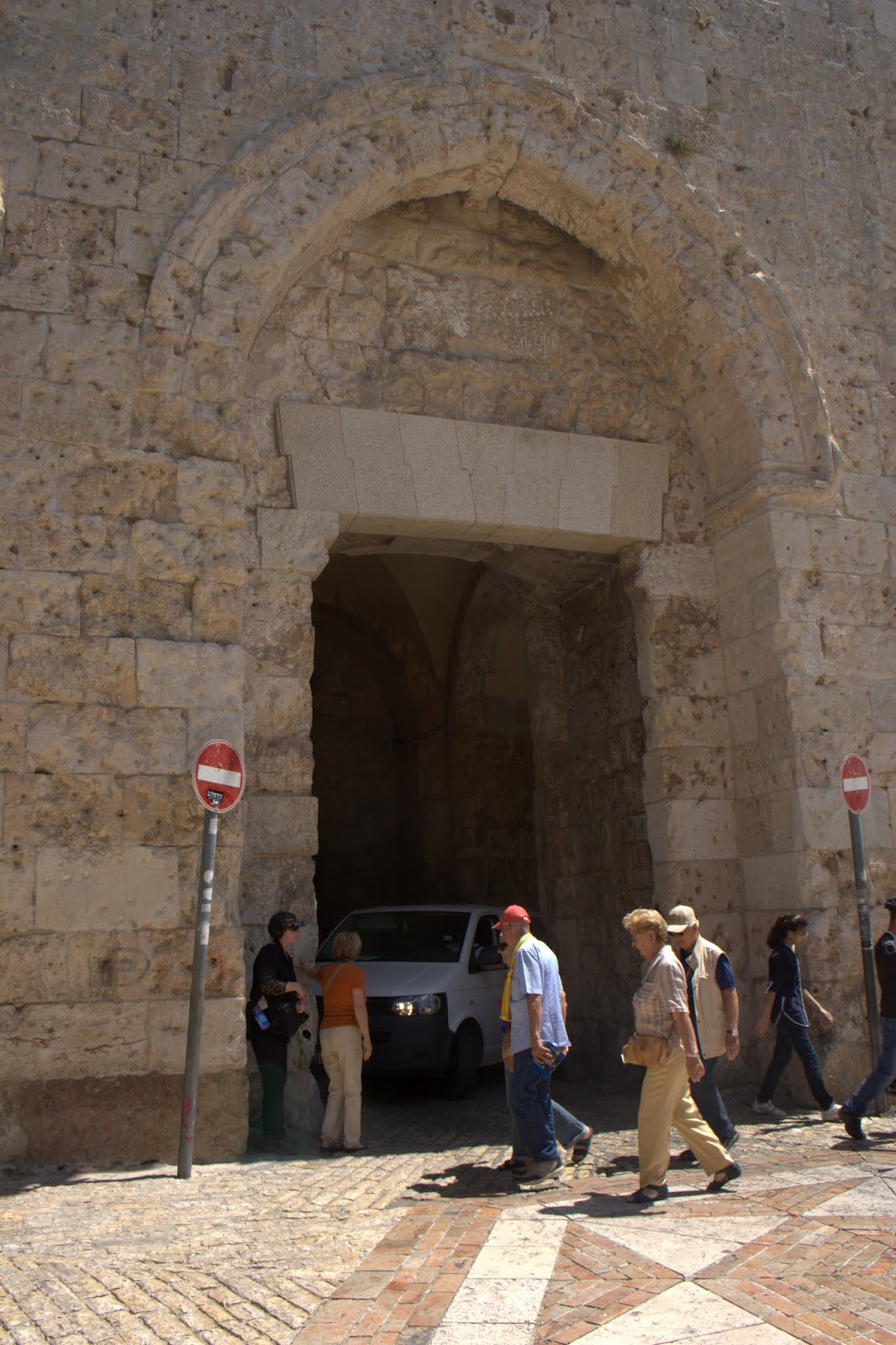 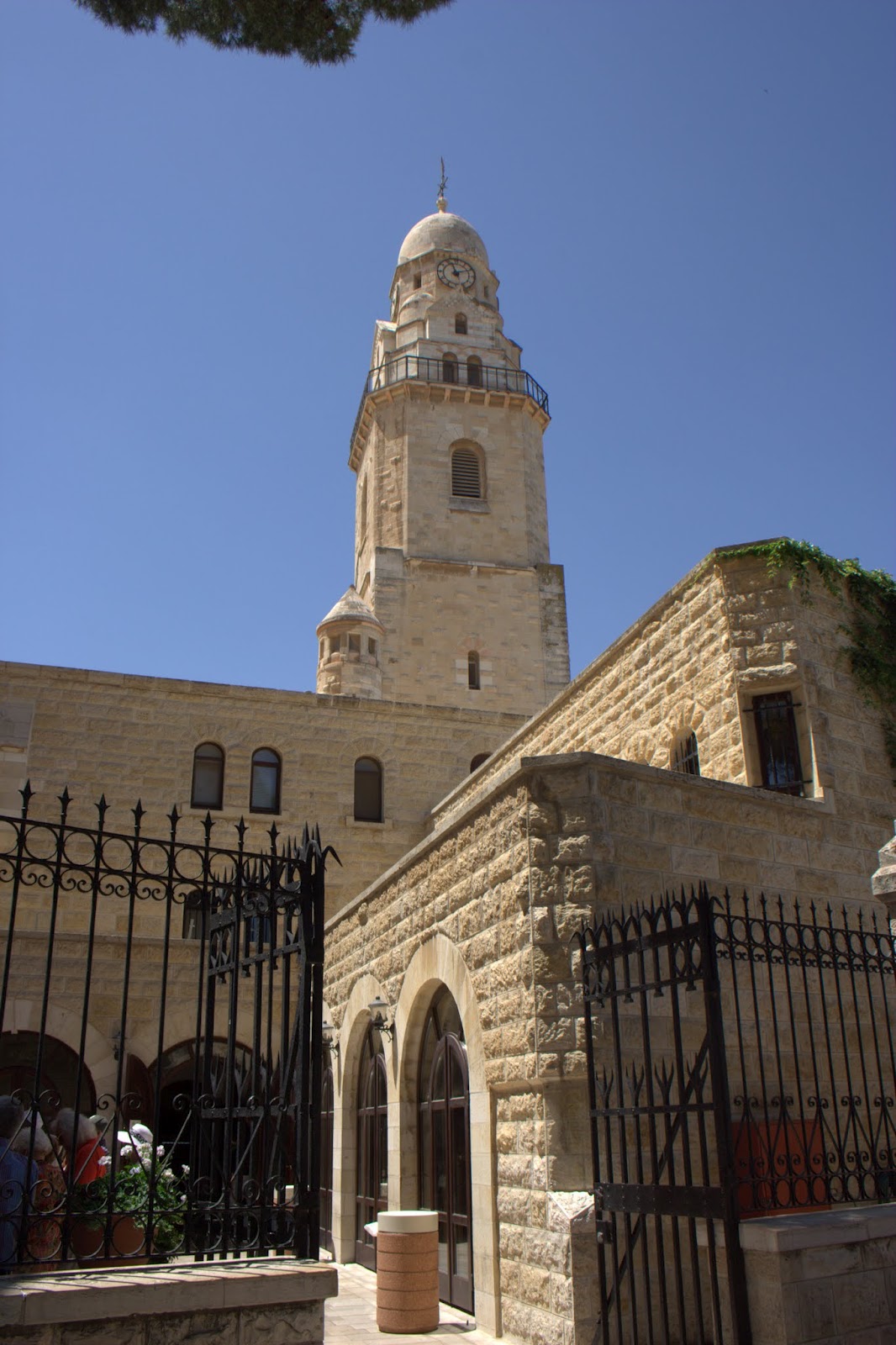 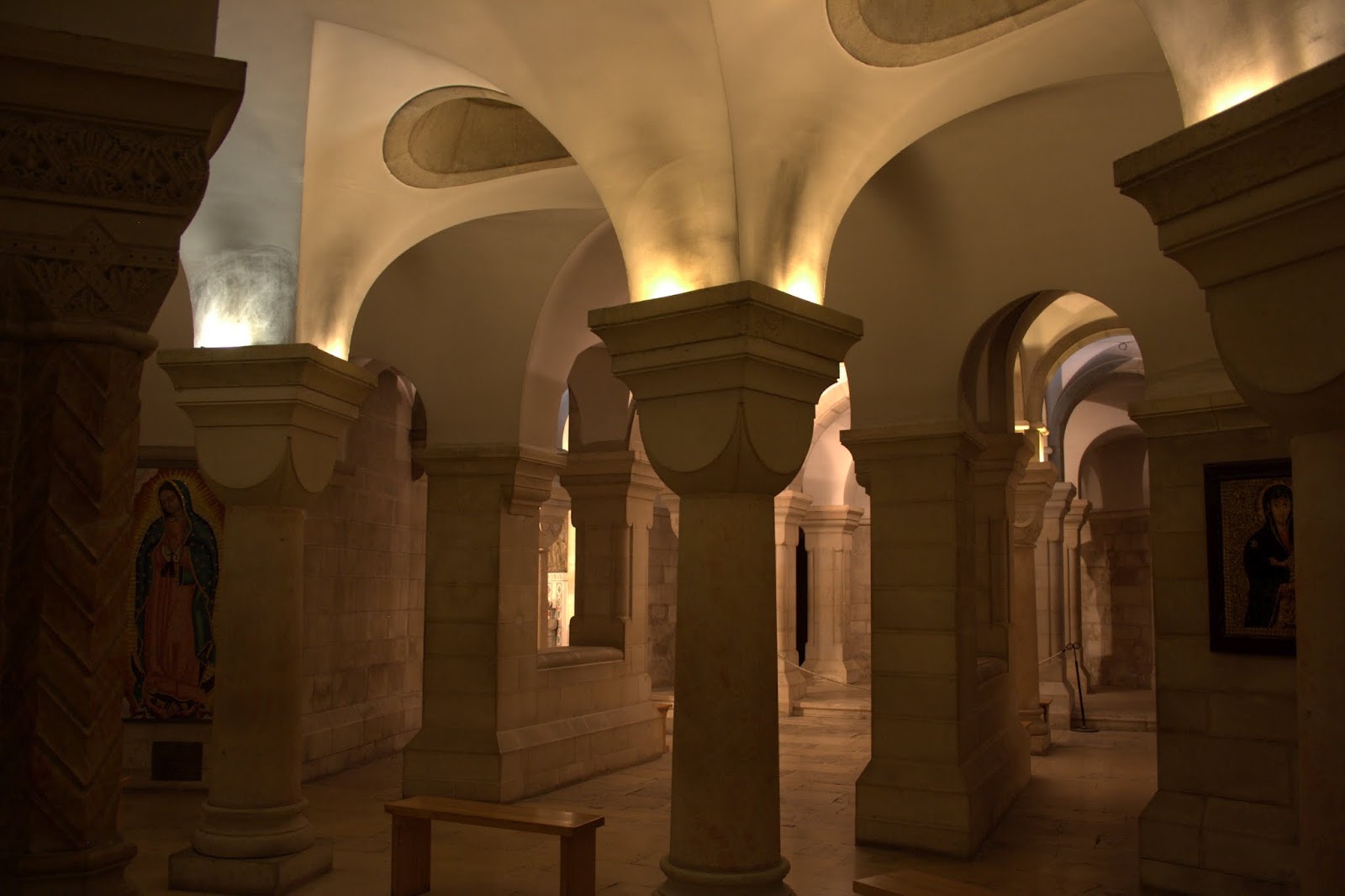 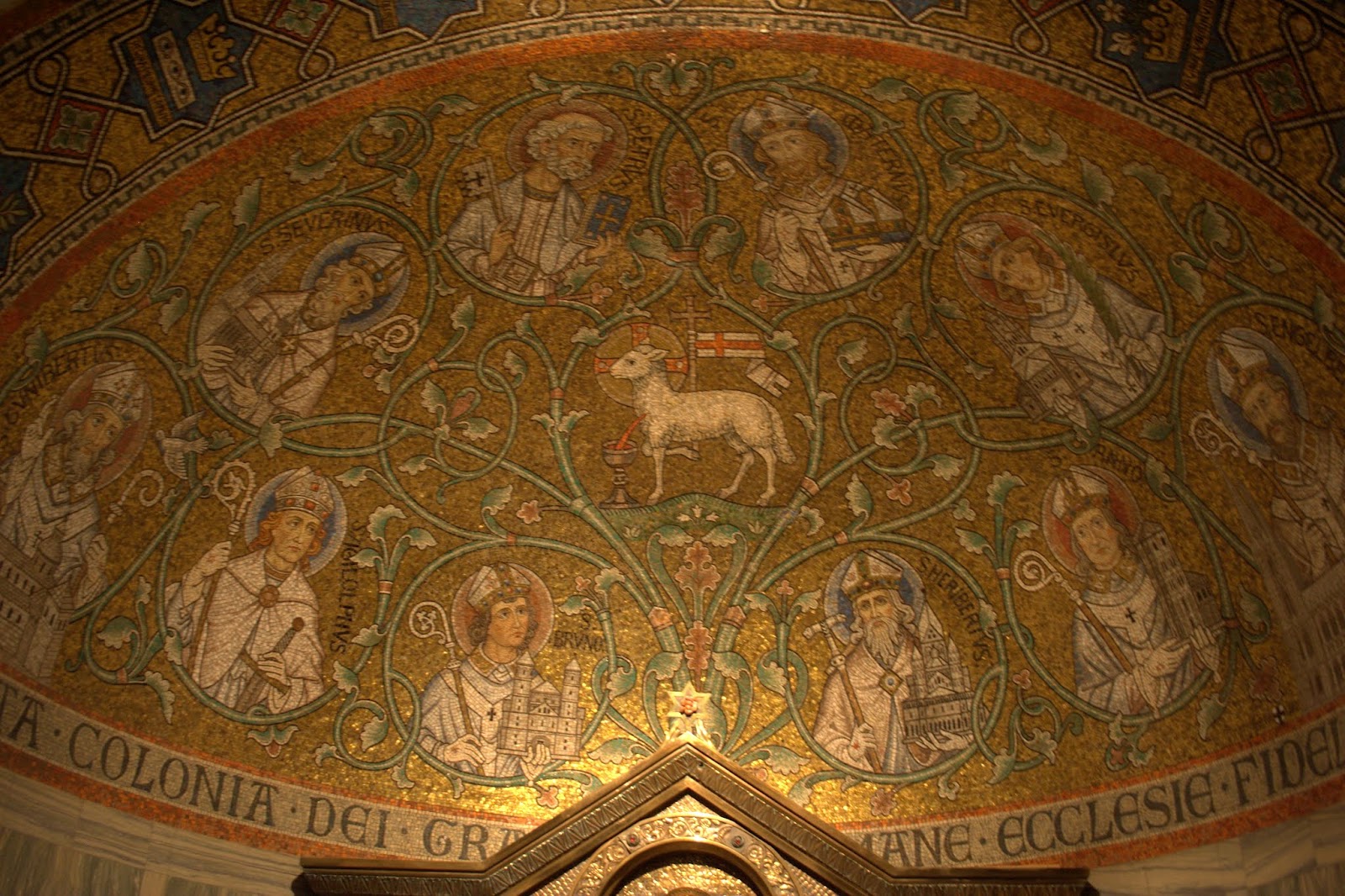 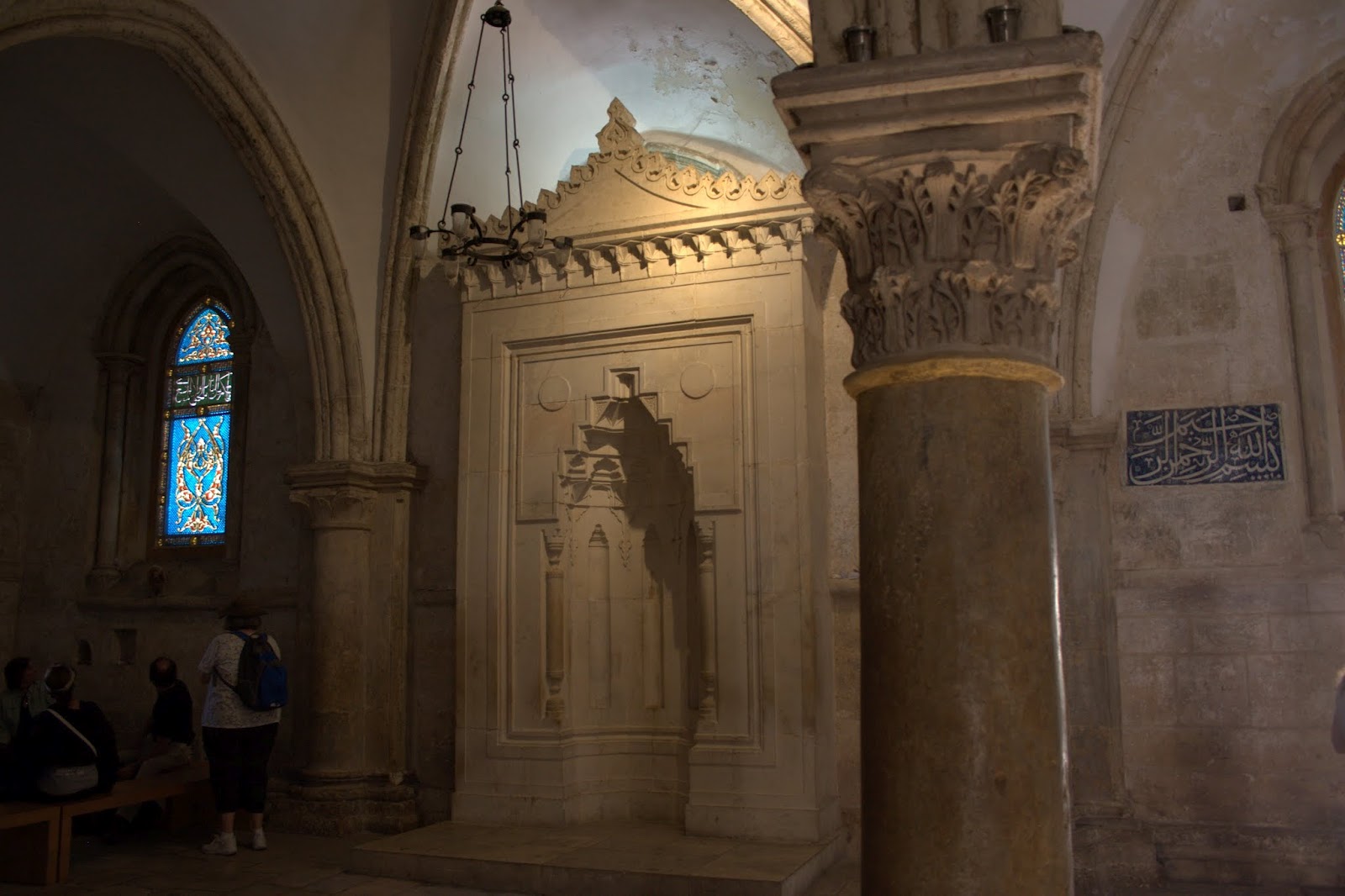 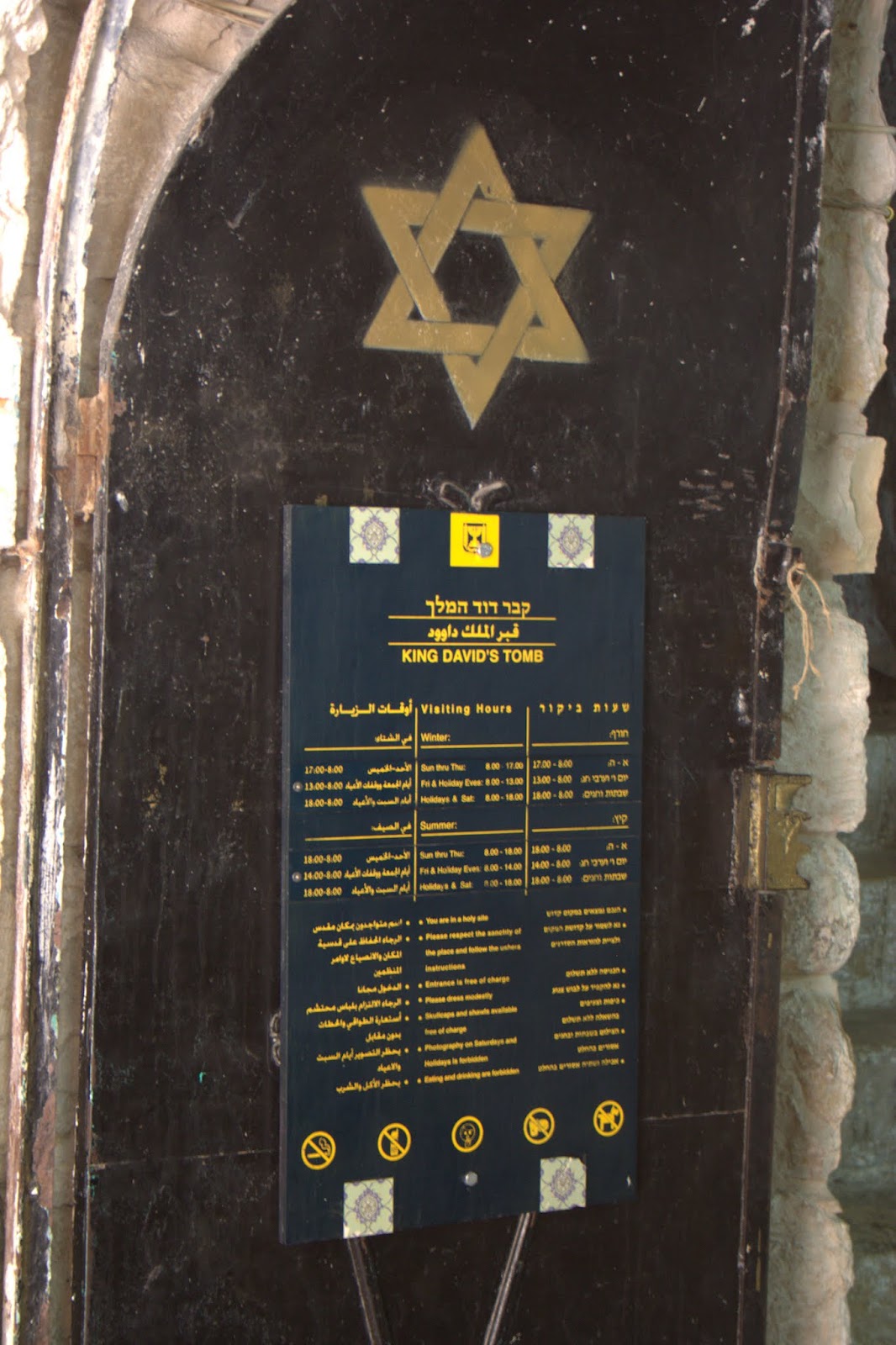 Finally, we visited the church of St. Petter in Gallicantu. This last church was the most interesting to me architecturally, but we only had five minutes to see it, so I didn’t have much time to look. Really interesting interior supports, and located on the hillside with a great view back toward the city. The church commemorates Peter’s triple rejection of Jesus on the night of his betrayal, which took place “before the cock crowed,” “gallicantu” meaning “cock-crow.” The current building is from the 1930s. 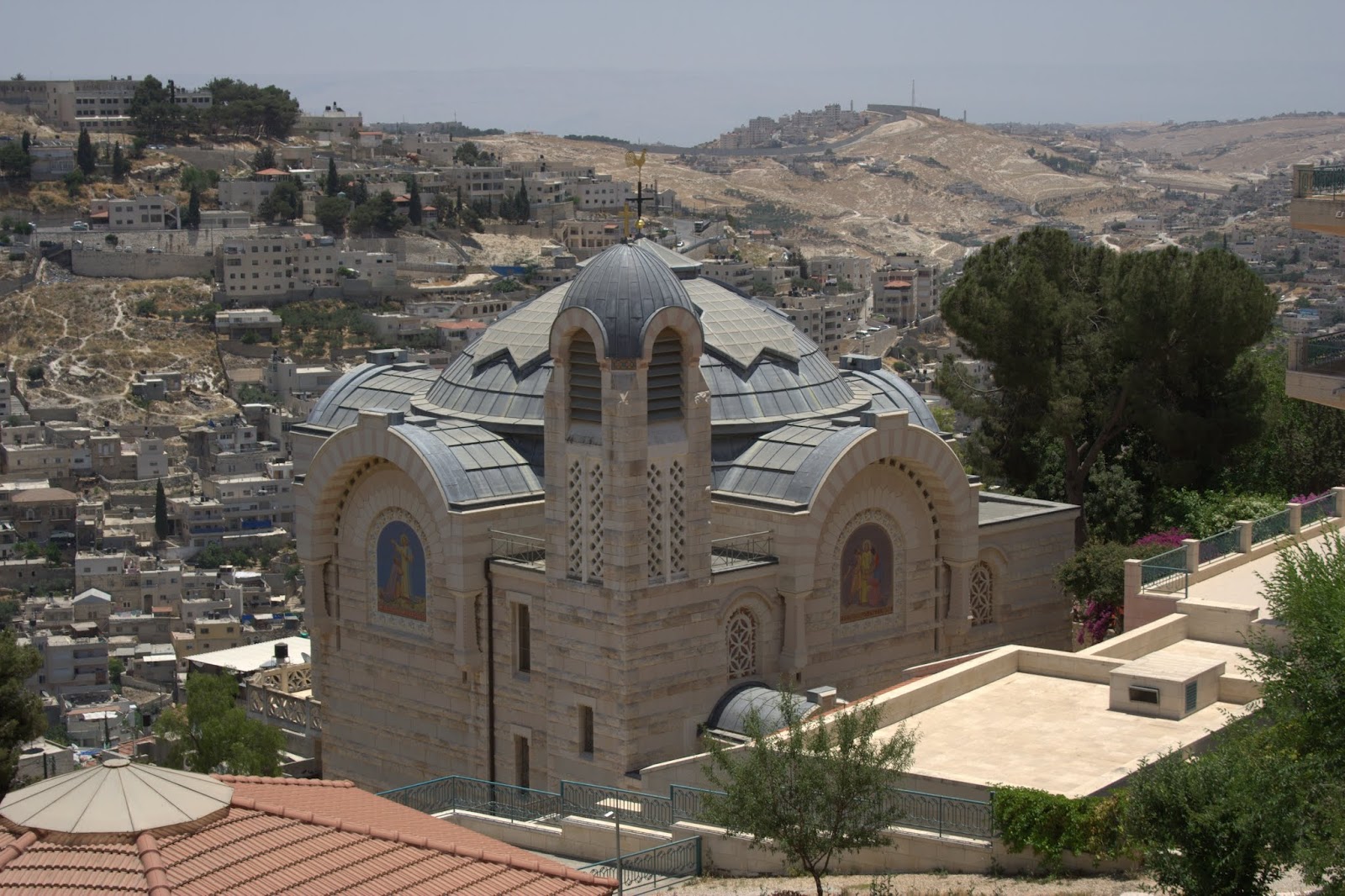 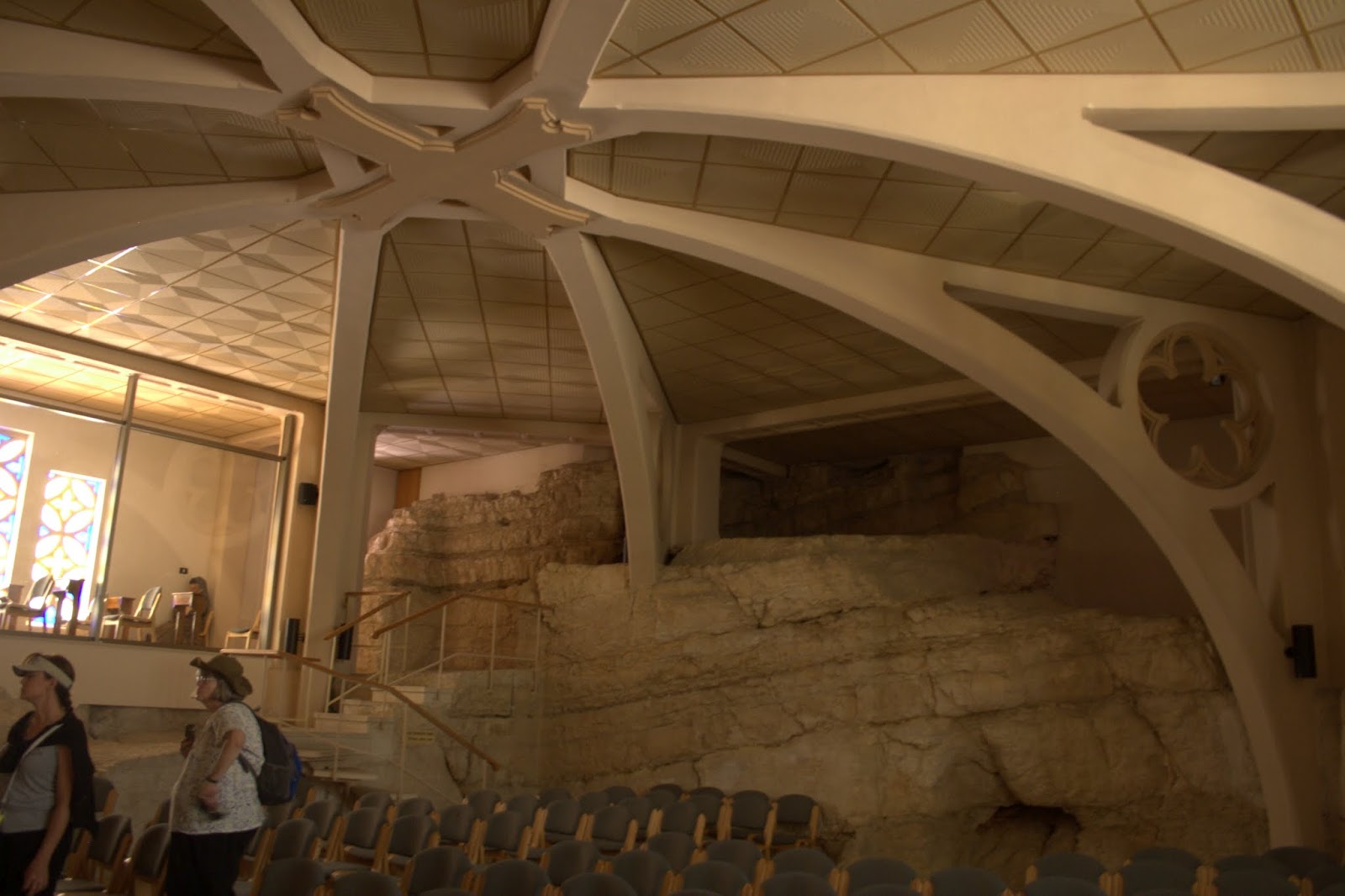 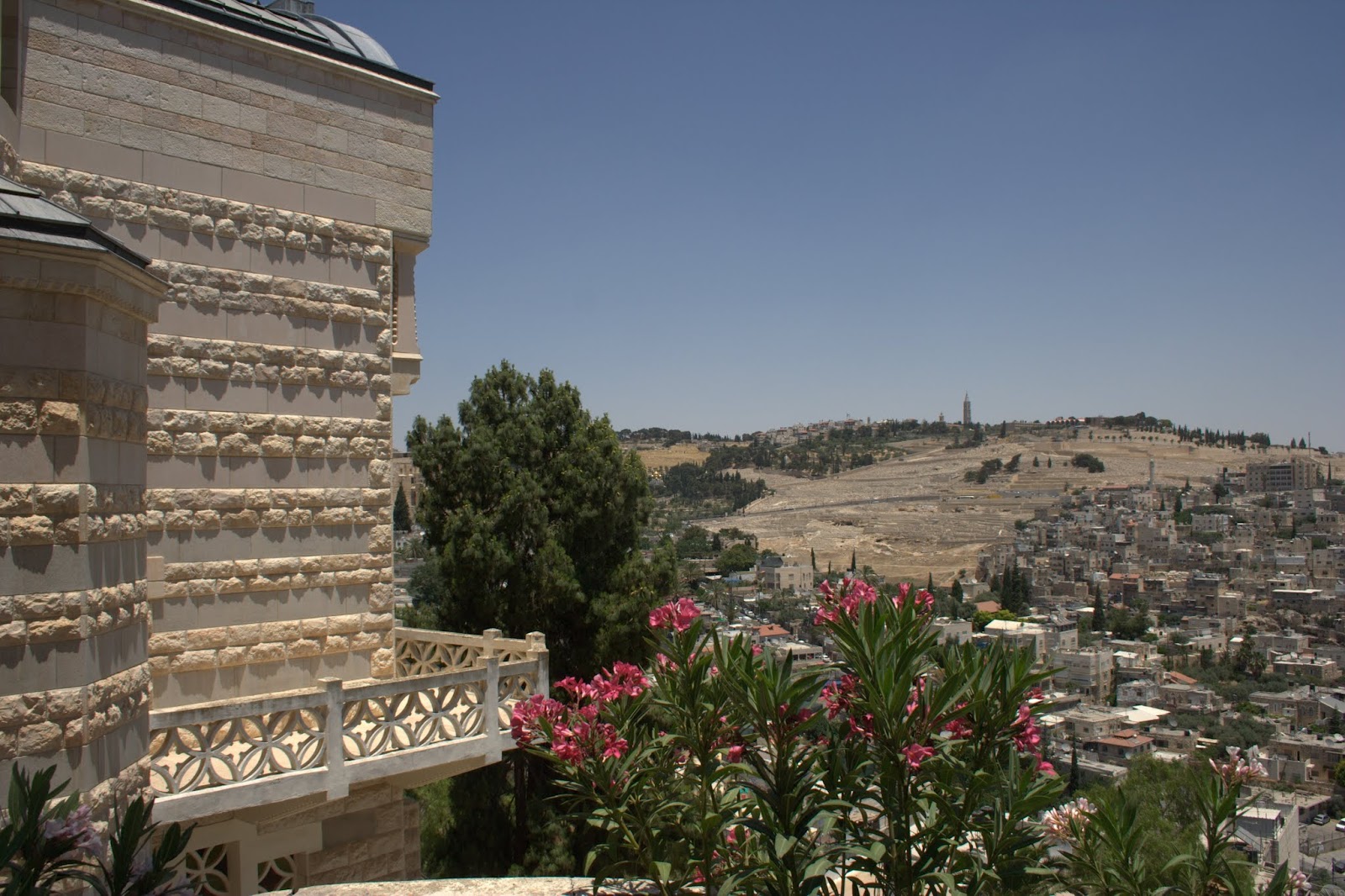 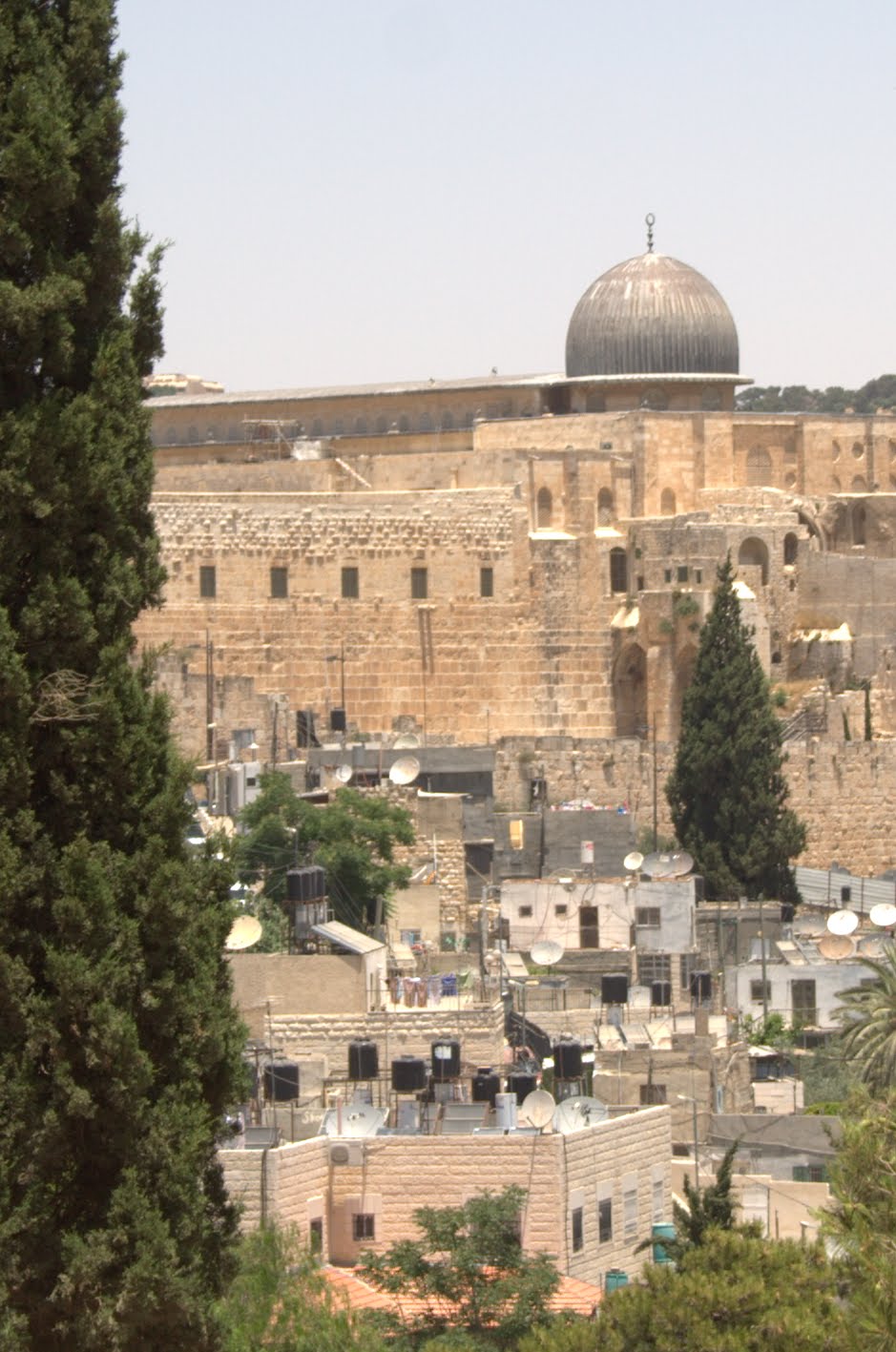 After our whirlwind tour we drove back into Jerusalem to attend/support a silent protest by the Women in Black group at noon (see also here), a group of women who have been protesting the occupation for more than twenty years at this same intersection. They wear black and hold signs that say simply “Stop the occupation” in three languages (Hebrew, Arabic, and English). We were given the opportunity to hold signs and stand with them in silent solidarity if we chose. On the side of the interesection where I stood, not much was happening - cars drove by, a couple of people waved positive or negative hand gestures. On the other side of the intersection, across the street, a group of counter-protestors had gathered with a megaphone and a large Israeli flag; that group was mostly men and shouted at us in Hebrew only. I gathered from the women that they were being called traitors and worse. I was amazed at the courage of the Israeli women who have been staging this vigil, week in and week out, for so many years in the face of so much opposition, and despite the anger that came from across the street. Apparently the megaphone was new this week, but the counter-protest was not. I can’t imagine how hard it must be to face your own people calling you a traitor to your face. Towards the end, a group of three young men went around the vigil asking apparently open questions about the goals of the group, and engaging the women in discussion. I heard one of them say something to the effect of, “But the Palestinians don’t want peace. Why should we negotiate with them?” I wished I could have introduced them to all the people I had met in the preceding weeks who work for peace every day… but their further questions revealed a hidden agenda, and we had to leave before I could listen to the rest of their discussion with the women who stood nearby. I can only hope that their discussion opened some minds. 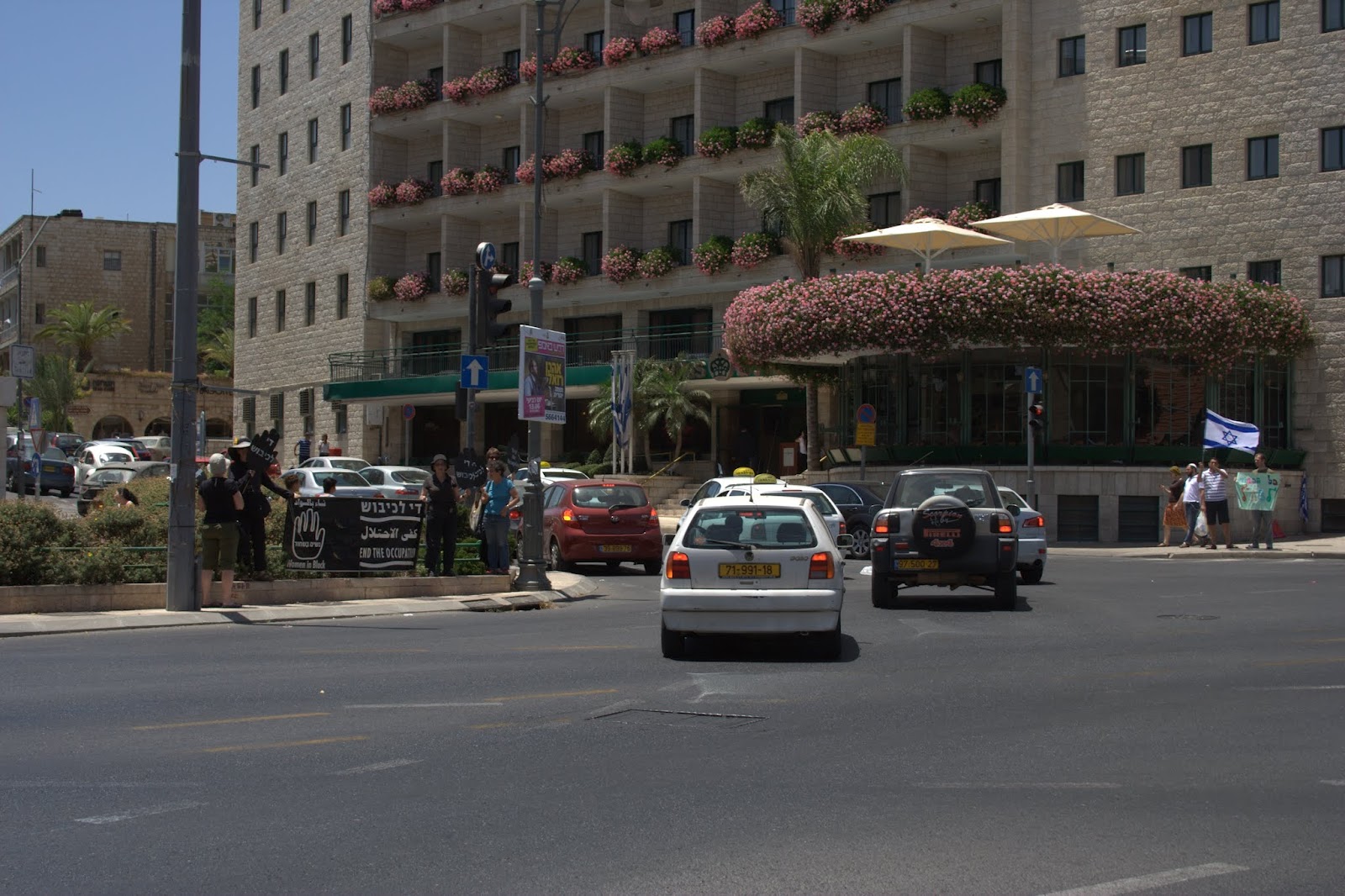 The several hours of standing in the hot sun, followed by soda and ice cream for lunch (the place where we had hoped to eat was closed), left me feeling horribly sick. I had a hard time making it through the afternoon and evening. I said goodbye to everyone who was leaving that night or early in the morning, and went to bed as soon as I could after our final meal and communion service together. A rather anticlimactic way to end the two weeks, sadly, but for the four of us going to Petra, there was more to come!