Saturday, June 2nd: Off to Petra

I felt much better after getting nine hours of sleep, although I wished I could have felt better sooner to give everyone a proper good-bye! We left the hotel around 6am to catch a shuttle to the Allenby Bridge crossing into Jordan. Our plan, cobbled together from internet suggestions and the recommendations of other travelers, was to take a shared shuttle to the Allenby Bridge, cross into Jordan, then take a taxi for the long ride to Petra. We had originally hoped to have a driver from our original tour company, but their offer was much too expensive. In the end, our plan worked fine and was cheaper. With taxis both ways and shuttles from the bridge to Jersualem (and then further to Tel Aviv on the way back), transportation (including exit taxes and bus fees) cost me $220 round trip. It can definitely be done for cheaper, but we opted for convenience over cost since there were four of us traveling together.

Many accounts of the process of going through the Allenby Bridge border crossing (also known as King Hussein Bridge - not to be confused with the Sheikh Hussein Bridge, a different border crossing) already exist online, so I’ll try to keep my own account brief. I think this elaborate choreography does reflect some of the crazy tensions in the region, though. This crossing is the only one in the West Bank, so Palestinians use it to leave the country since they usually cannot get to Tel Aviv. Thus this crossing point is known for its long lines and crowds. We left Jerusalem at 6:30 and arrived at the border 40 minutes later. Once there, our shuttle sat in a line of vehicles waiting to be allowed through the first of a series of checkpoints on the way to the Israeli terminal. At the terminal we had our passports checked, paid Israeli exit taxes ($52!), and waited for the bus to take us across the “bridge” (the tiny river is barely noticeable as you go by) to the Jordanian terminal. The bus ride isn’t free, despite being mandatory, since personal vehicles are not allowed through the crossing. On the Jordanian side, our luggage was x-rayed, our passports were checked again, and we were through. In all it took about an hour and there were no lines, so we must have gotten in early enough to avoid the crowds. At the Jordanian terminal, all the taxi drivers seemed to be friends or colleagues; they agreed among themselves on who would take us to Petra, and ushered us into the waiting car. Our driver was very nice, but told us at the beginning it would be a 2 hour drive - it’s actually over 3 hours. At least we stopped a few times along the way to take pictures (below). Finally, six hours after leaving Jerusalem, we arrived at our hotel in Petra! The hotel, the Amra Palace, was nice, but too far from the site to walk, so we had to take taxis to get back and forth. In all it was still cheaper to do this than to stay at the much more expensive hotels right across from the site, but a lot more hassle. 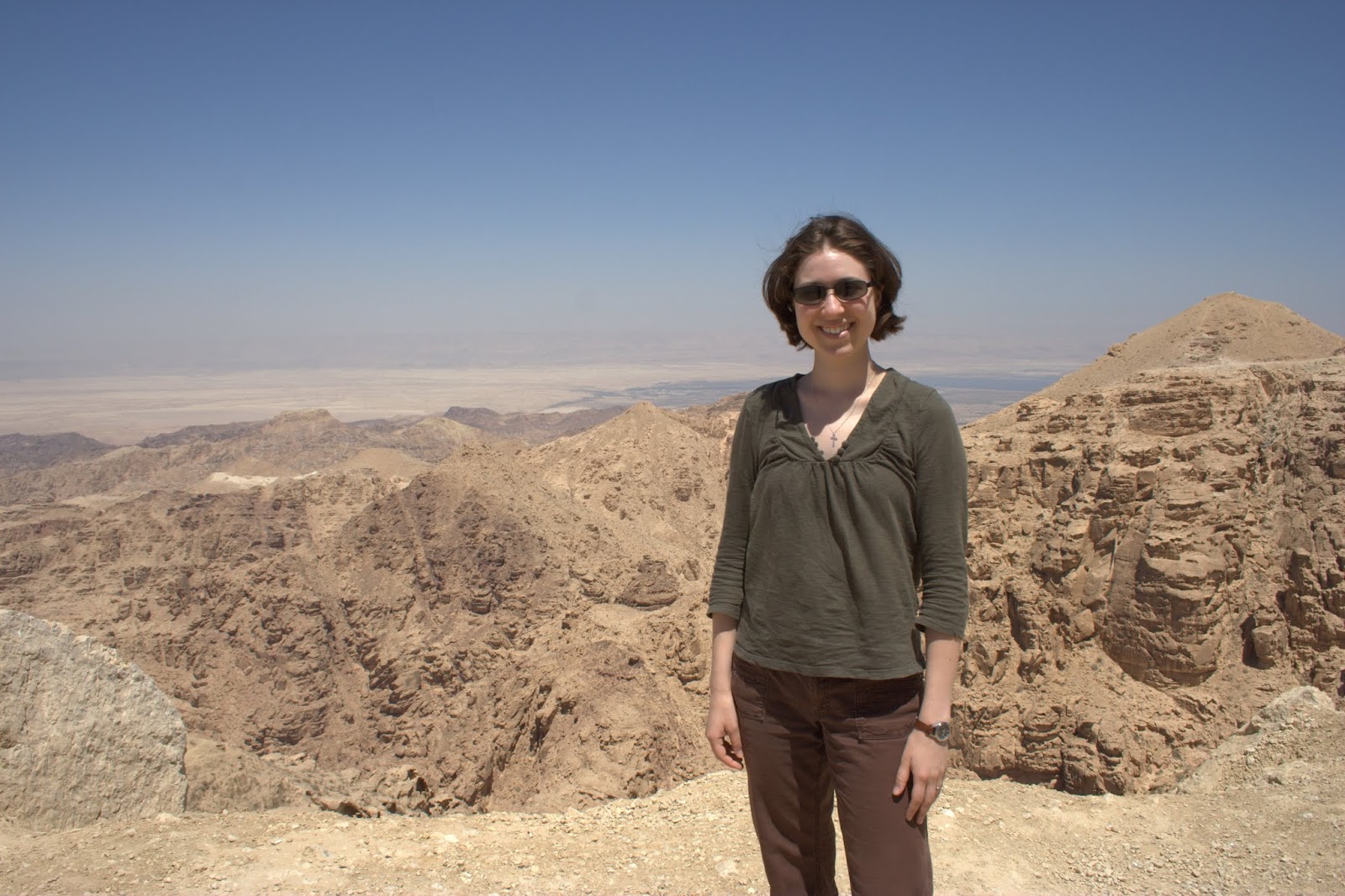 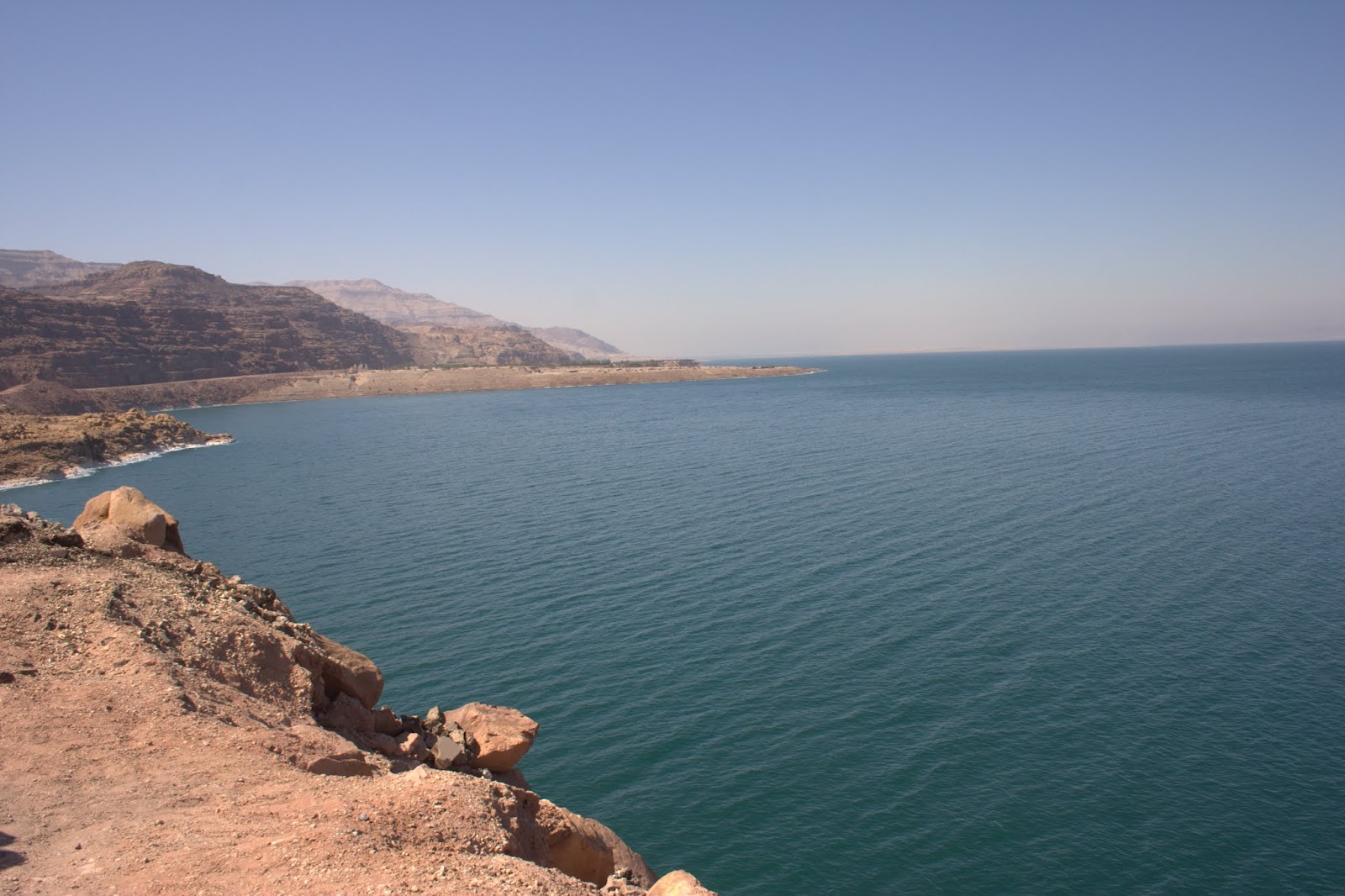 After dropping off our suitcases we left to get some lunch and head into the site. A few words about costs seem appropriate at this point. Tickets to Petra are insanely expensive, especially if you’re only staying one day; the prices have been raised consistently over the past years to ridiculous levels. Price-gouging became a constant feature of the trip. I have come to the conclusion that the entire economy of the town of Petra/Wadi Musa (Wadi Musa is the “real” town where Jordanians live, Petra is the area with hotels where most foreigners stay) is based on the supposition that tourists will spend only one day there. Thus, everything is priced many times what it is actually worth or should cost for that part of the world. Although 1 JD (Jordanian dinar) is actually worth a lot to a local, all the souvenirs, water bottles, taxi rides, etc are priced in multiple dinars on the assumption that a visitor will spend anything on a one-time purchase. A further example: We were encouraged at the ticket office to get a guide for an extra 50 JD ($70), which isn’t too bad split four ways, so we decided to do it. But then after showing us through approximately half the route, our guide wanted us to pay him an additional fee to see an extra part of the route. Half of us didn’t want to go, including me because I was still not feeling fully recovered, and this seemed to upset him, I think because it meant he wouldn’t make the full extra fee. Personally I wouldn’t recommend getting a guide - get a guidebook instead, read it before you go, and you’ll be set.

Petra was the capital of a native Arab group called the Nabateans, influenced by but autonomous from the Greeks and Romans, and occupied from the 6th century BC through Roman times. It was an important site on Middle Eastern trade routes. What remains today are a large number of rock-cut tombs, the theater, some temples, and some parts of the water system. The tombs are generally very shallow, with small interiors compared to the large, elaborately-carved facades. The Treasury, the Monastery, and the other named sites are all tombs from around the 1st or 2nd century BC (Hellenistic period). The local stone is beautiful and red, and dust will coat everything you wear there. The Treasury is famous from being featured in a number of films (including Indiana Jones and the Last Crusade). The Siq (the canyon) that leads to the valley is also amazing. For locations of the various monuments, see this map. The entire area is a UNESCO World Heritage Site. 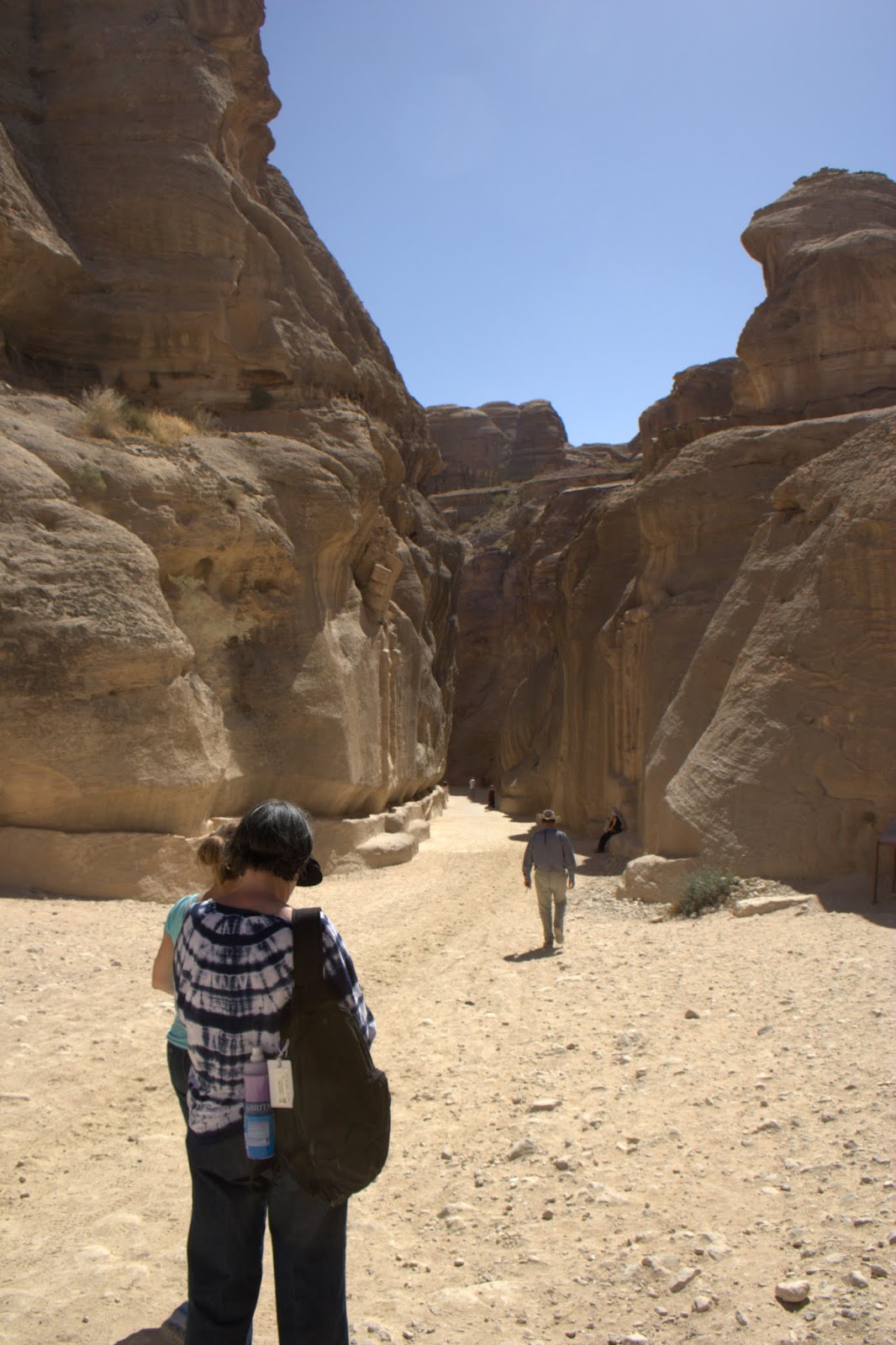 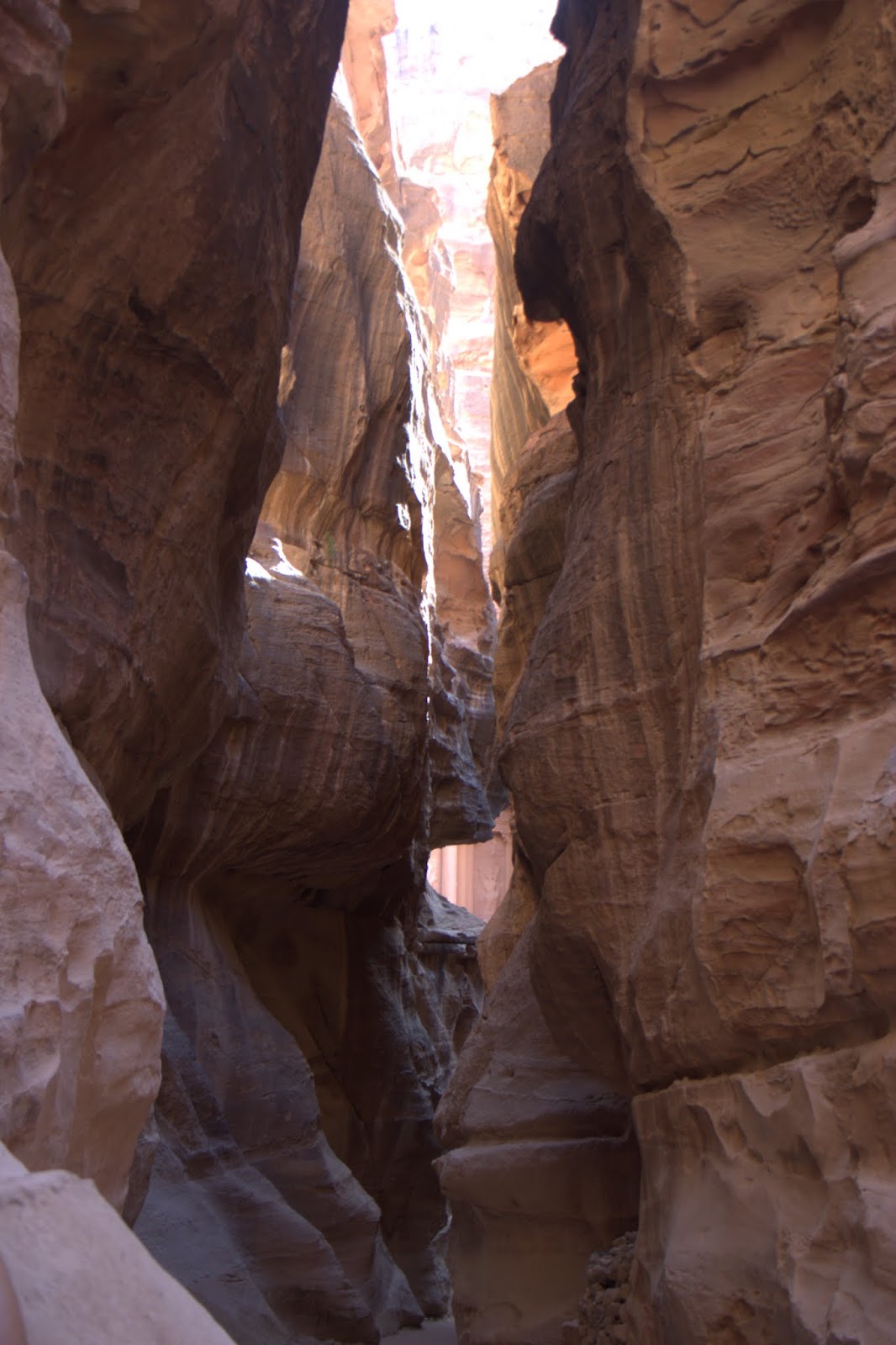 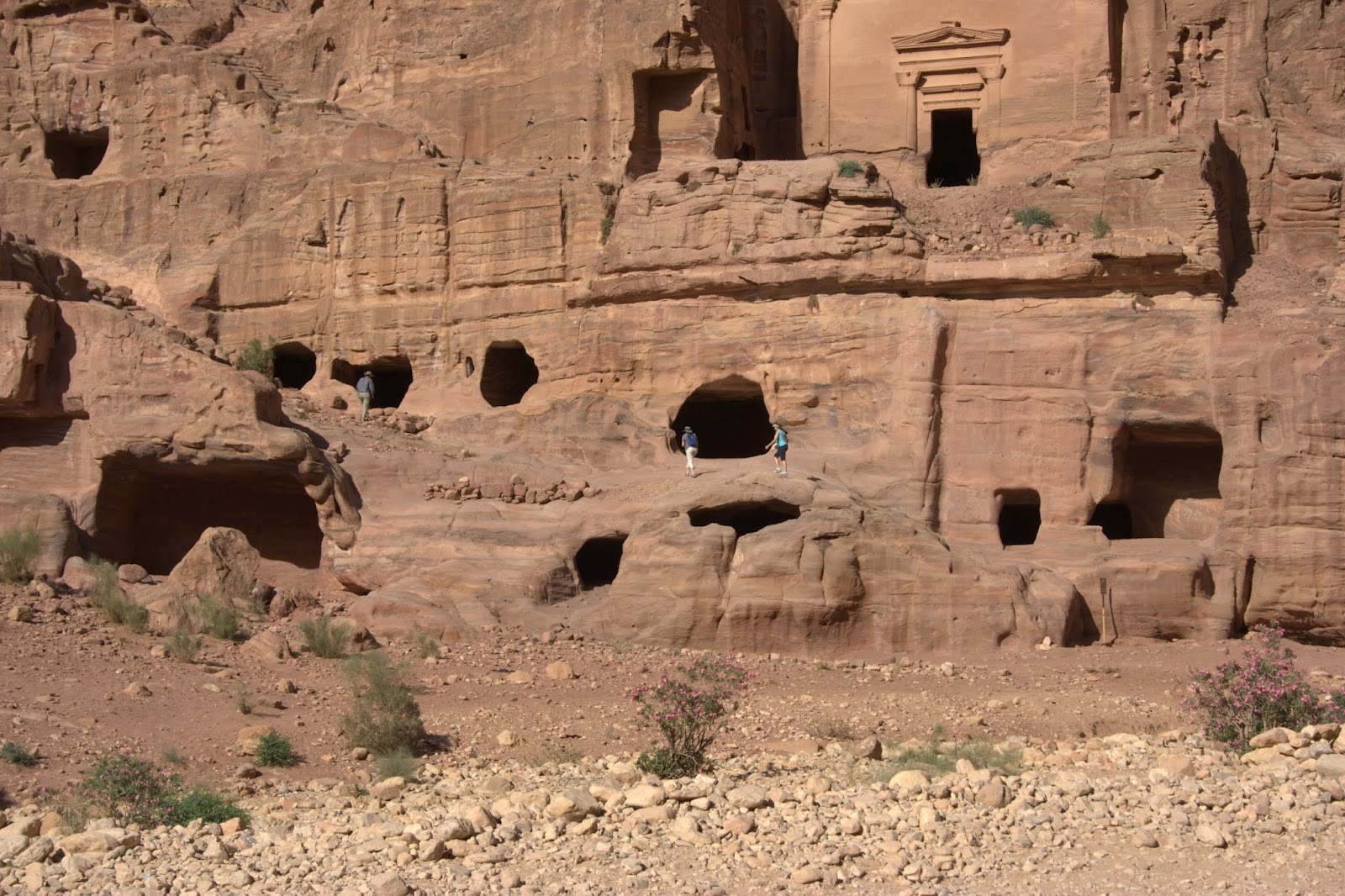 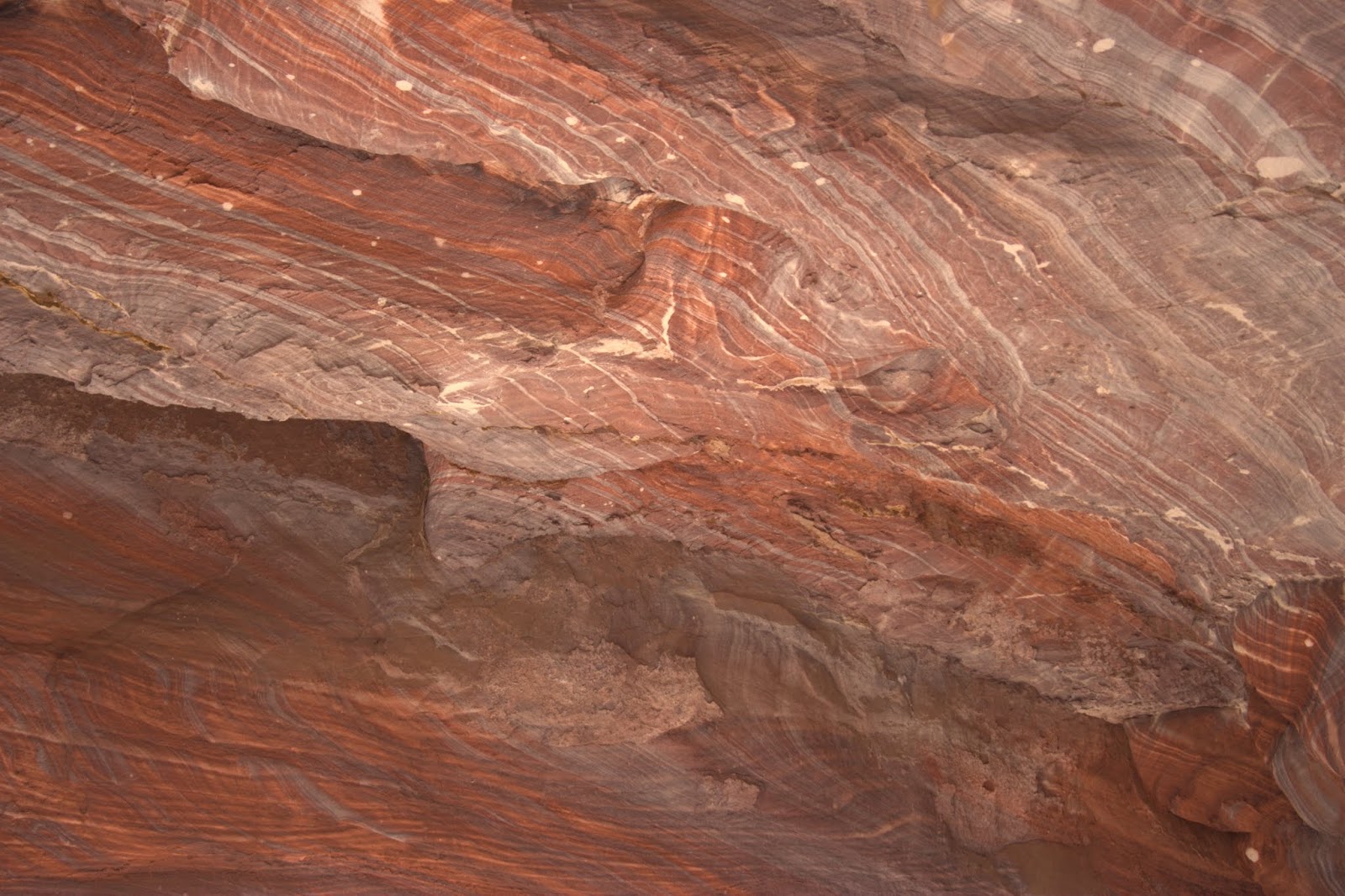 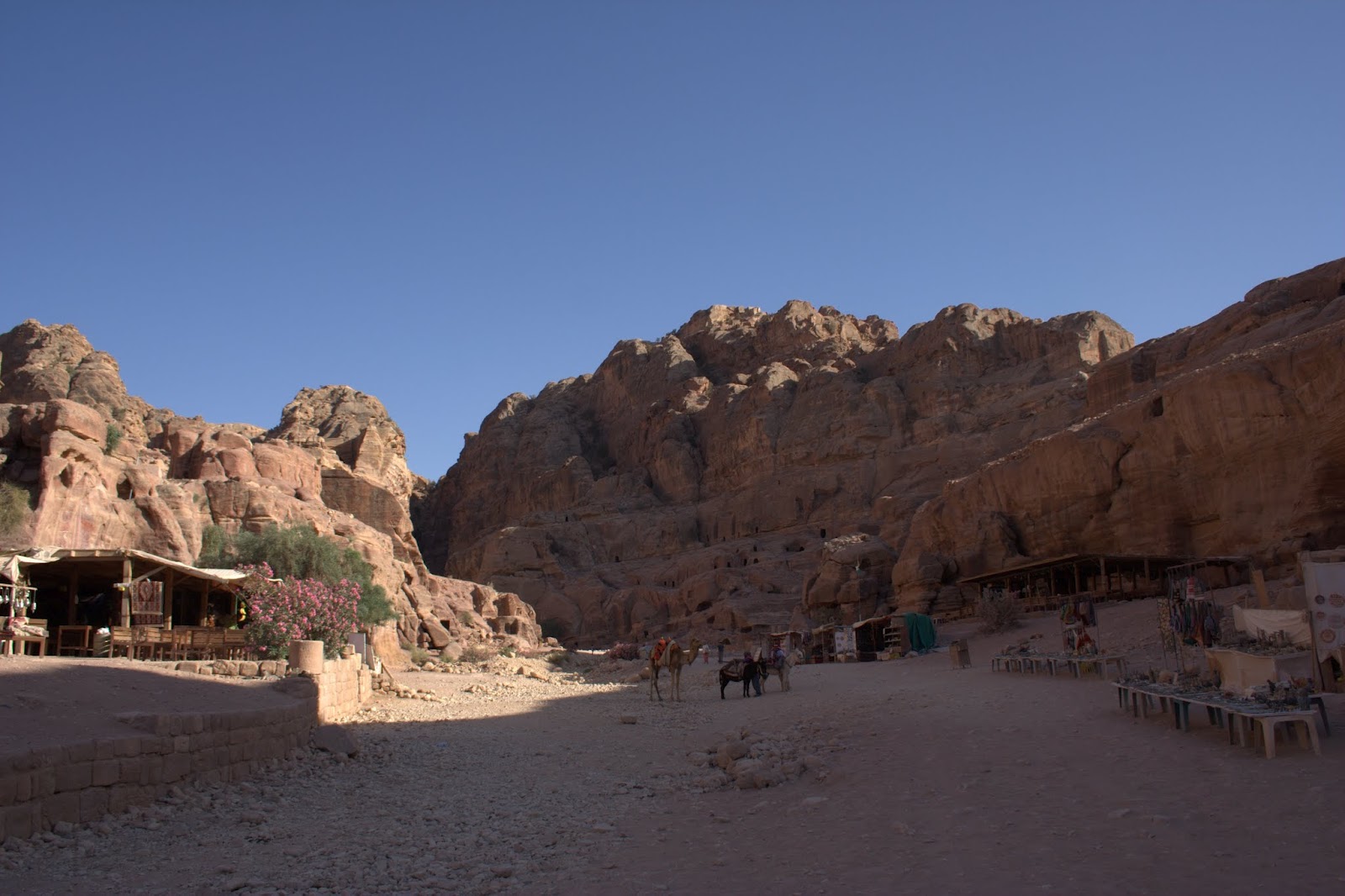 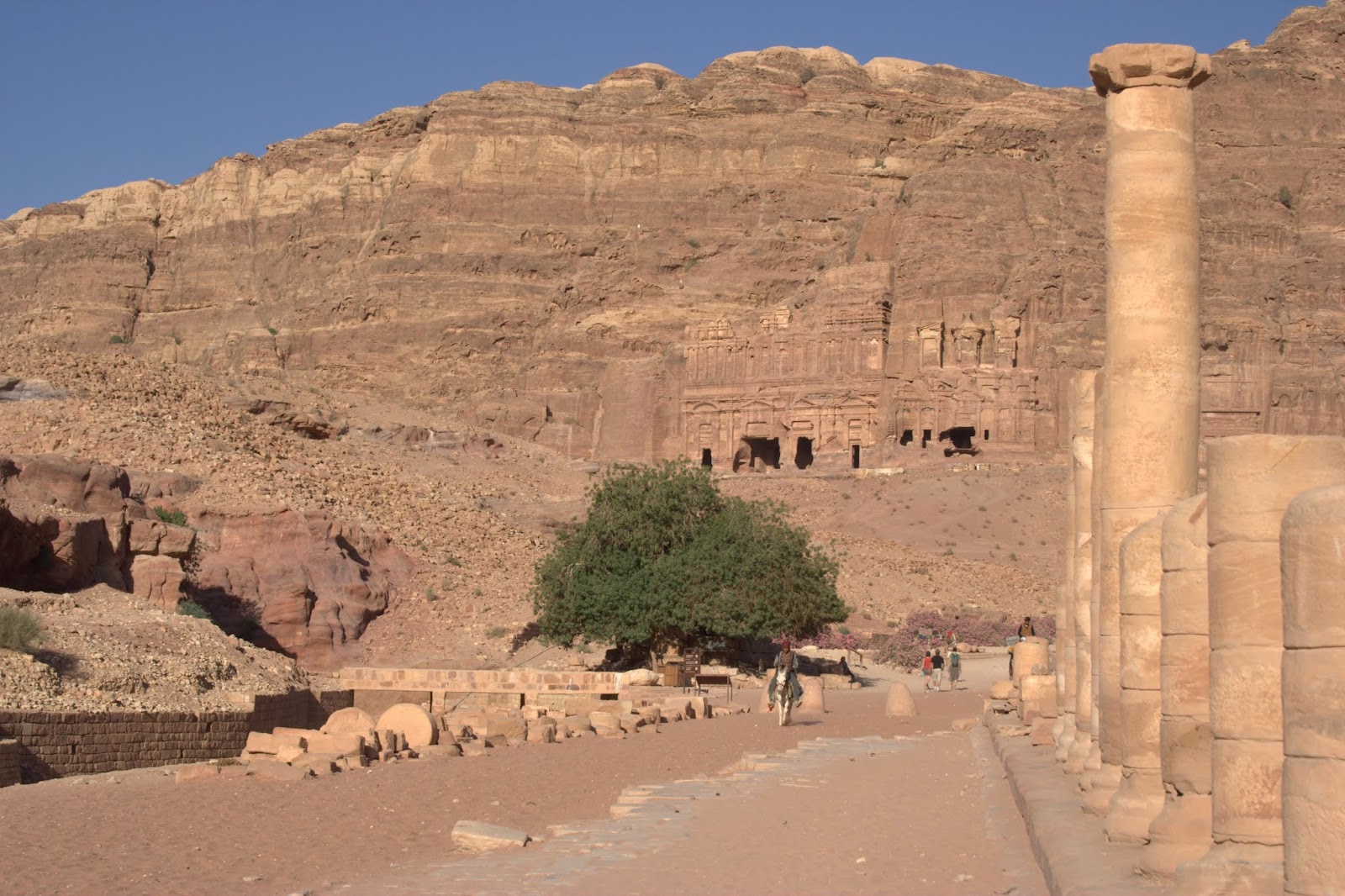 Petra is apparently operated mostly by Bedouin, who manage the various animal rides, snack bars, souvenir shops, etc, throughout the site. The area is set up as one very long path from the entrance to the Monastery at the top of a mountain, meaning that as far as you walk in, you must walk out. It’s a physically exhausting place to visit, requiring visitors to walk miles and climb up and down, all in a sandy valley without shade. The Bedouin have capitalized on this by setting up animal rides (horses, carriages, camels, donkeys) that you can ride, for a fee, from one part of the valley to the next. You can see nearly the entire place by riding. This increases the cost of the visit significantly because the rides aren’t cheap, and even the “included” horse ride isn’t free because the men leading the horses expect, and demand, a tip. I decided from the outset not to pay for any rides, not only because of the cost but because I didn’t want to touch any of the sad-looking menagerie of overworked animals; unfortunately, this meant that every day’s visit was an exhausting workout.

Walking through Petra felt like being a character in a video game: whenever I came within earshot of someone working there, he/she accosted me to offer rides, invite me inside, sell me something, etc. I did my best to ignore all this because it made me distinctly uncomfortable and irritated to be assailed constantly for money. Everyone was friendly and few people were rude, but the continuous demands wore me out. The site seems to be a great business for everyone involved, since over the course of the three days I spent there, I heard many stories from the young people about trips to visit friends in the US, traveling abroad, etc. It seems that there is a hierarchy of positions within the park that a young person works through: selling trinkets and postcards, then manning the different animal rides, and so forth. I saw mostly young men working and some women and children; I’m not sure where the adult men work, or perhaps they work behind-the-scenes somehow. I think Petra would make an interesting sociological study.

Readers, you are probably wondering when I’m going to talk about my impressions of the site itself, the architecture, ruins, and rocks. I’ll let the photos speak for themselves. It is really a beautiful site, difficult as it is; still, as I wrote in my journal, “I have a feeling that the things I will remember most are not the ones I want to remember…” The Bedouin, the scraggly and abandoned huts in front of every monument, the oppressive heat and sun and sand, and the sickly animals, are what I will remember best. The photos will have to remind me of why I went to Petra in the first place.