On Sunday we agreed to get up early to try to beat the heat, but only three of us made it out to Petra - my roommate decided to sleep in and ended up sleeping all day. That was probably the healthy decision, but I was determined to see as much as possible! So my two traveling companions and I went on to Petra, arriving around 9a. Our plan: make the trip up to the Monastery, requiring a hike up a rocky, unshaded mountain trail. My friends decided to take the offer of a Bedouin youth we had met the day before to ride donkeys up and down the trail, and then were picked up by his friend and driven back to the park entrance. The reason to drive back rather than walk is that it takes hours, literally, to walk from the start of the trailhead to the entrance. I decided to walk the whole way. It turns out that our two trips took almost exactly the same amount of time - I arrived back at the entrance only a few minutes after my friends! Partly this was because I got a short-but-significant head start, and partly because I didn’t stop as often to take pictures. But in case you want to compare the time it takes to climb versus ride, it’s the same, because the donkeys only travel as fast as their guides, who are on foot. Don’t believe the Bedouin guides who claim you can make it up in 20 minutes.

A further side note on how profitable Petra is as a business venture: my friends paid their two guides 50 JD each for the 4 or 5 hours that the trip took. To put this in perspective, that’s a better rate than I earn at my job here in the US as an architectural intern, and these young men probably had little to no schooling and might make two or three trips in a day, resulting in a very high rate of pay for a country whose cost of living is much lower than here. To be fair to the guys, though, they asked for 35 JD apiece, and my friends gave them the rest as a substantial tip. 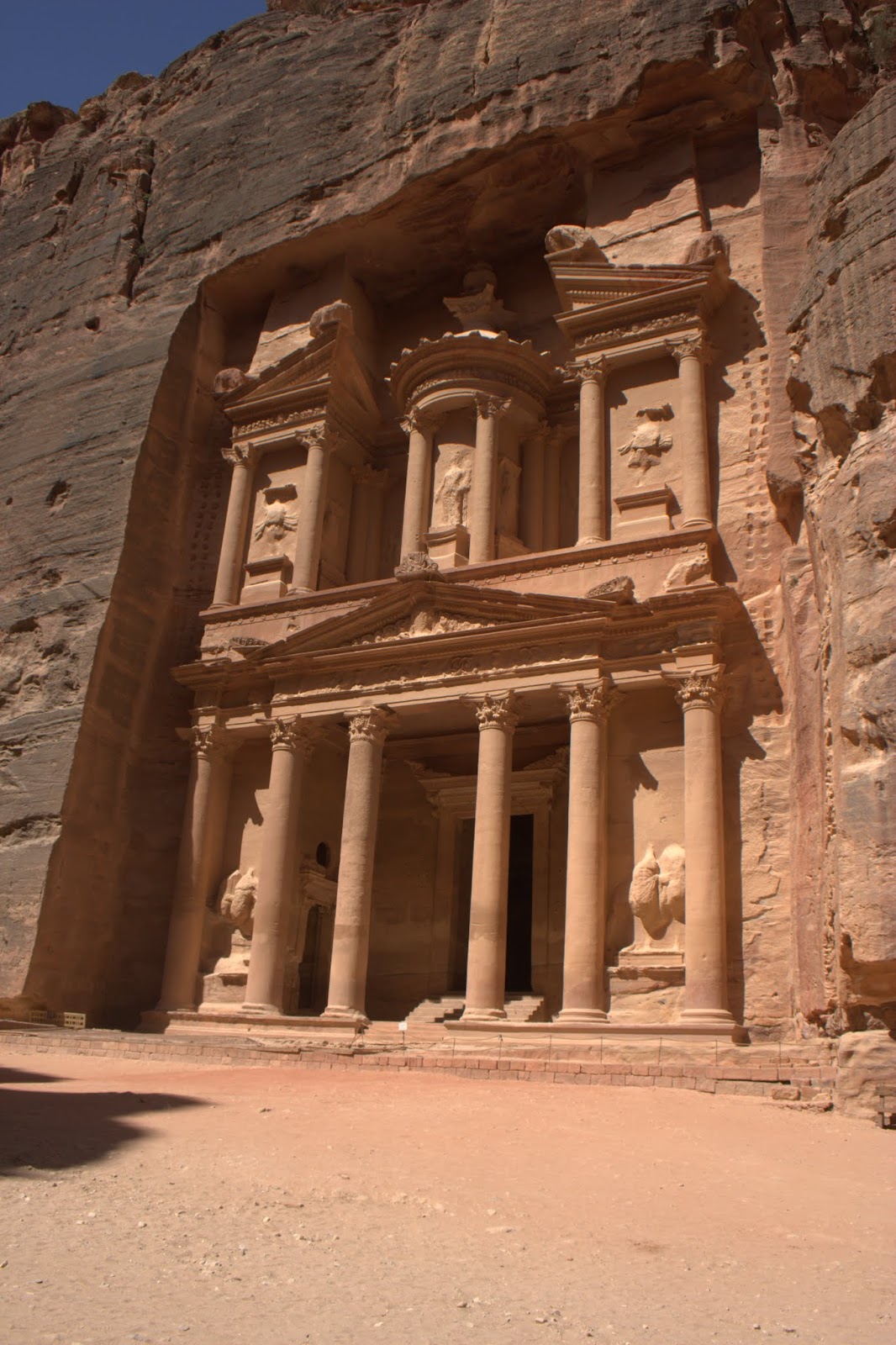 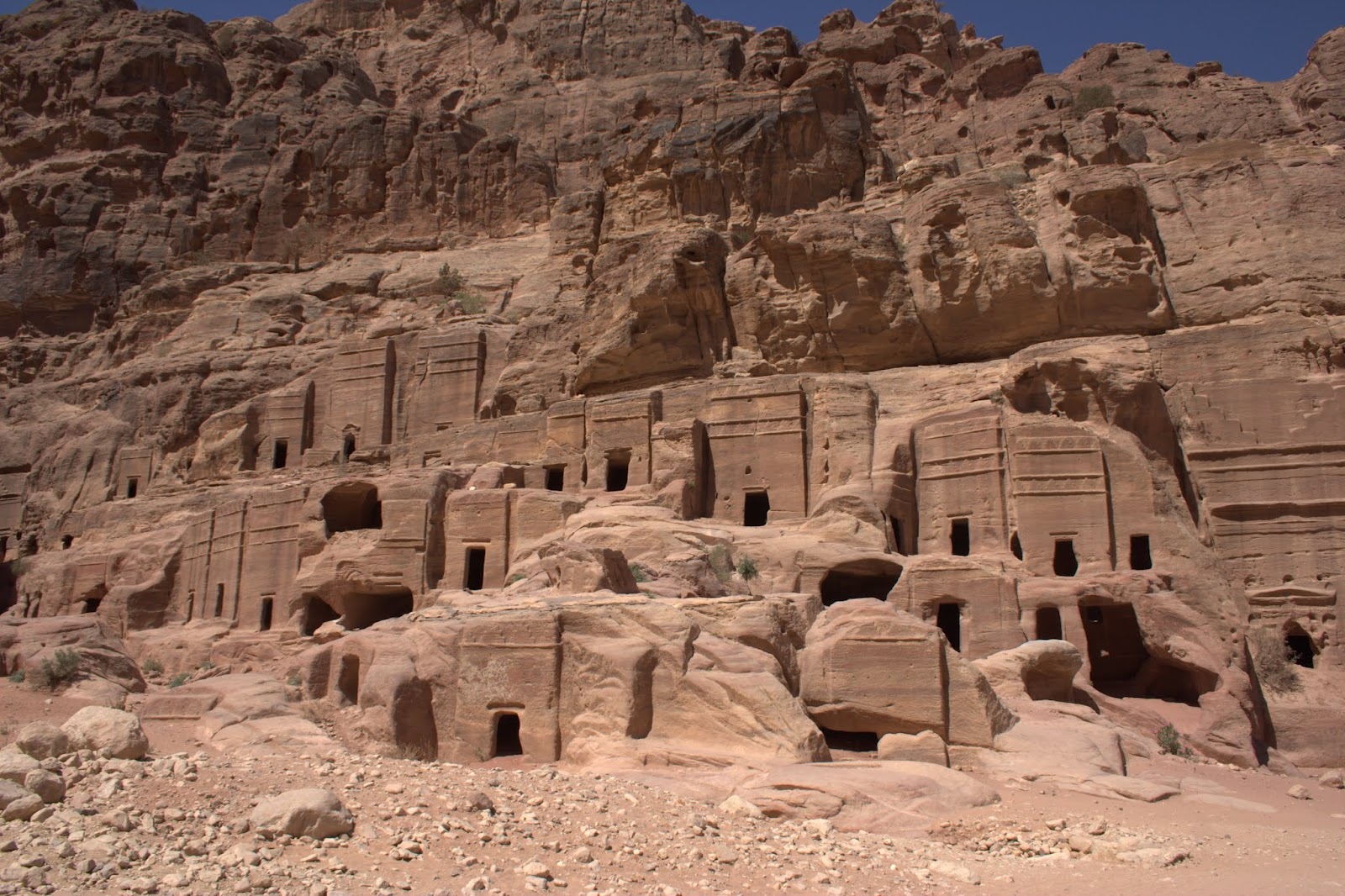 Back to the story: We got to Petra around 9am, as planned, so by 10:30 or 11am I arrived at the foot of the mountain trail, a few minutes ahead of my friends on their donkeys. The hike up was beautiful, although I wished we had arrived even earlier, since by 11 there was very little shade and it was getting hot. I climbed together with an Australian couple for part of the way, who kindly took my picture at the top. The Monastery, the main attraction, is very similar to the Treasury down below, except that it’s on top of a mountain. Like the Treasury, it was a tomb, nothing more, with a relatively shallow interior and nothing inside. I was exhausted but determined to get all the way to the top, so I made the extra effort to climb up to one of the look-out points, as I was advised to do by several climbers on their way down. The view was of endless rocky desert. 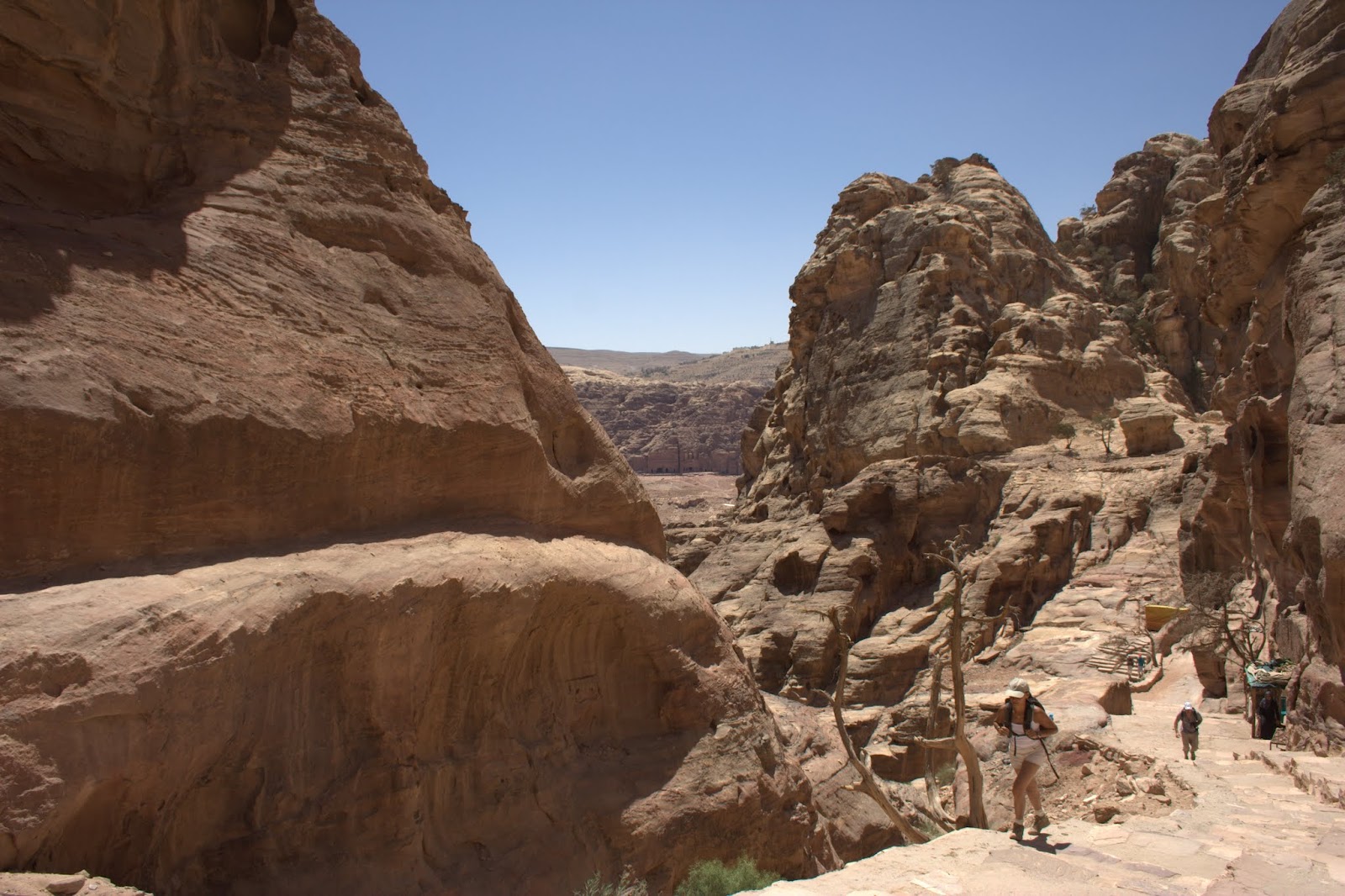 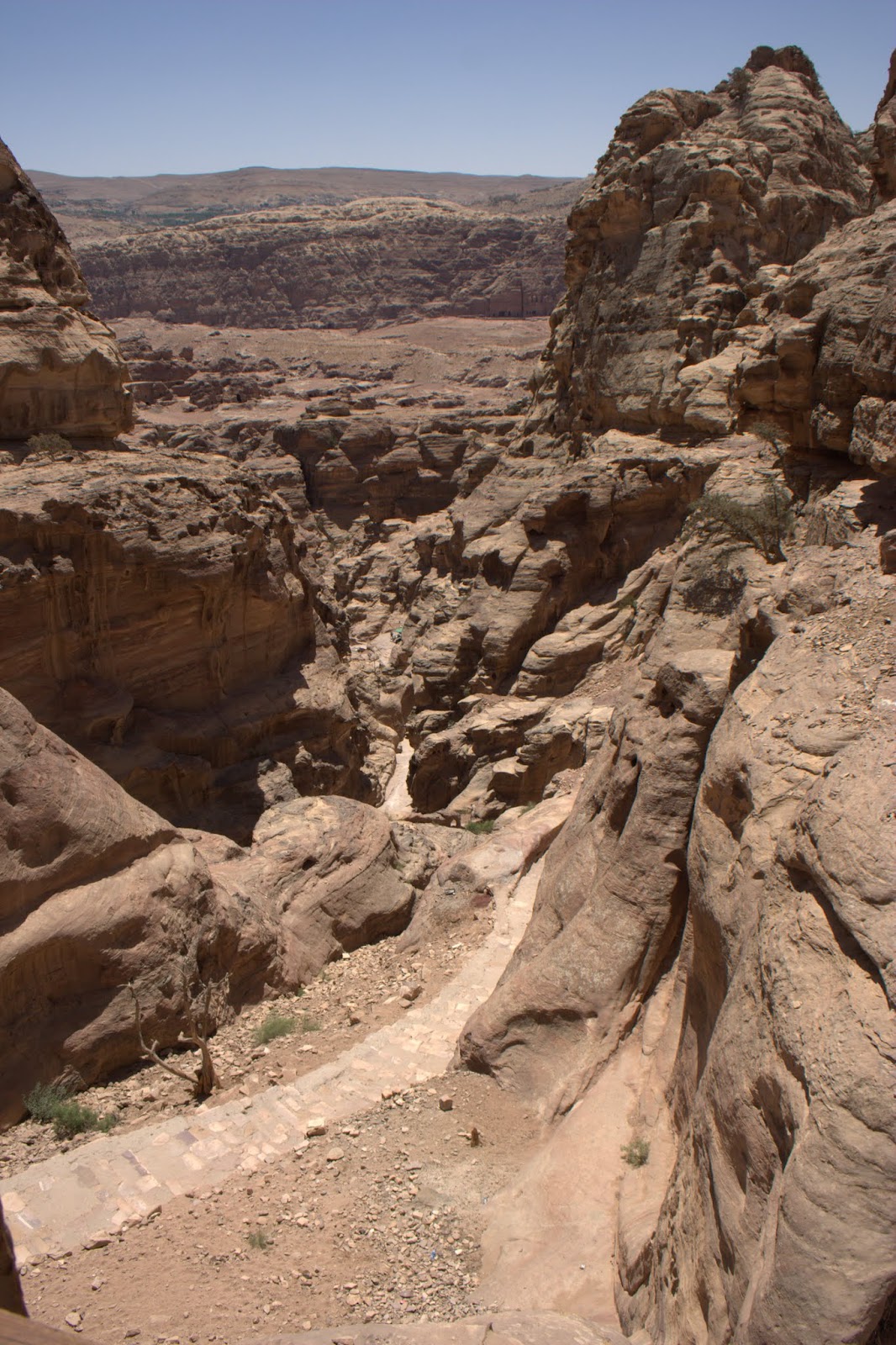 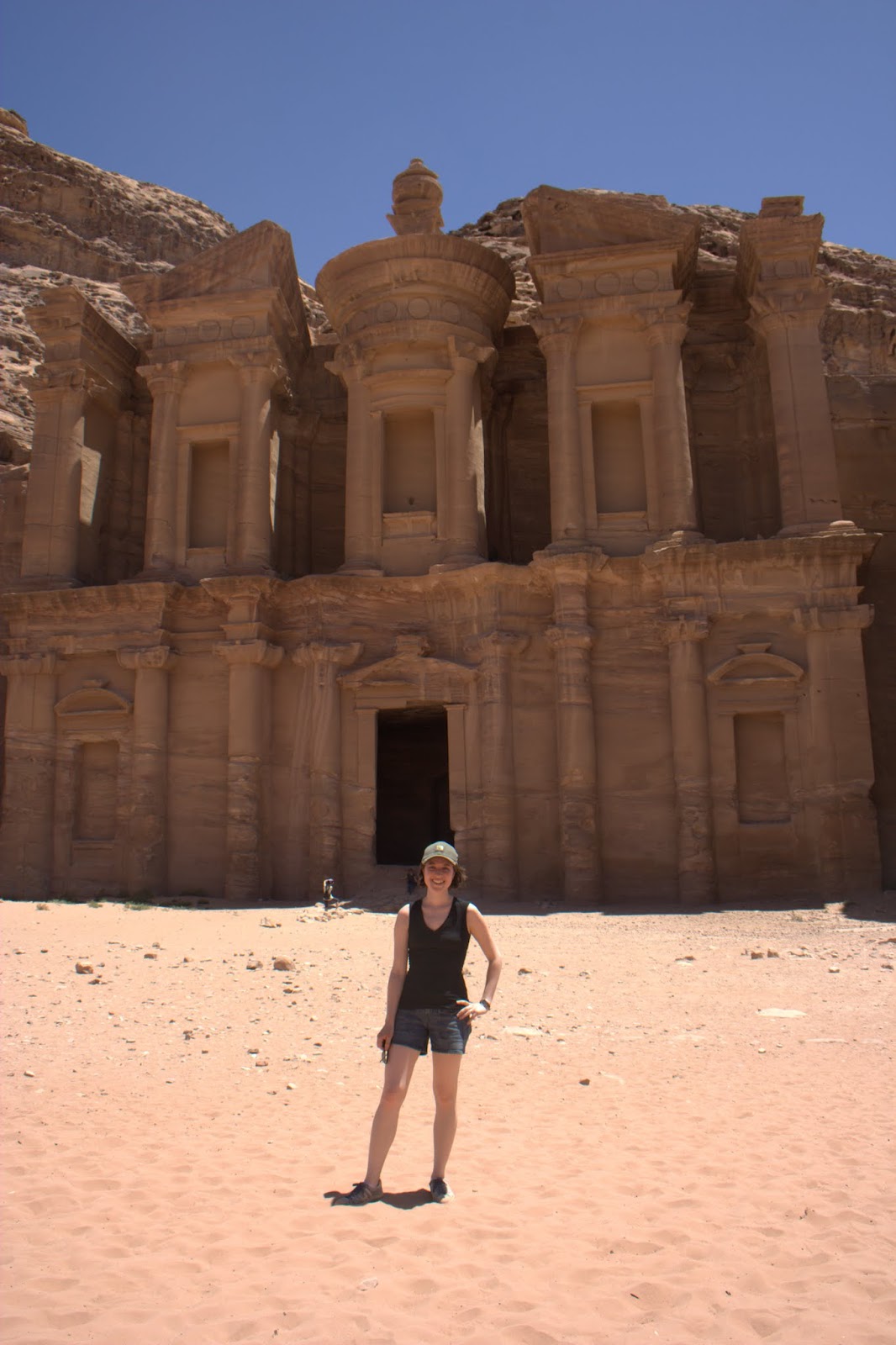 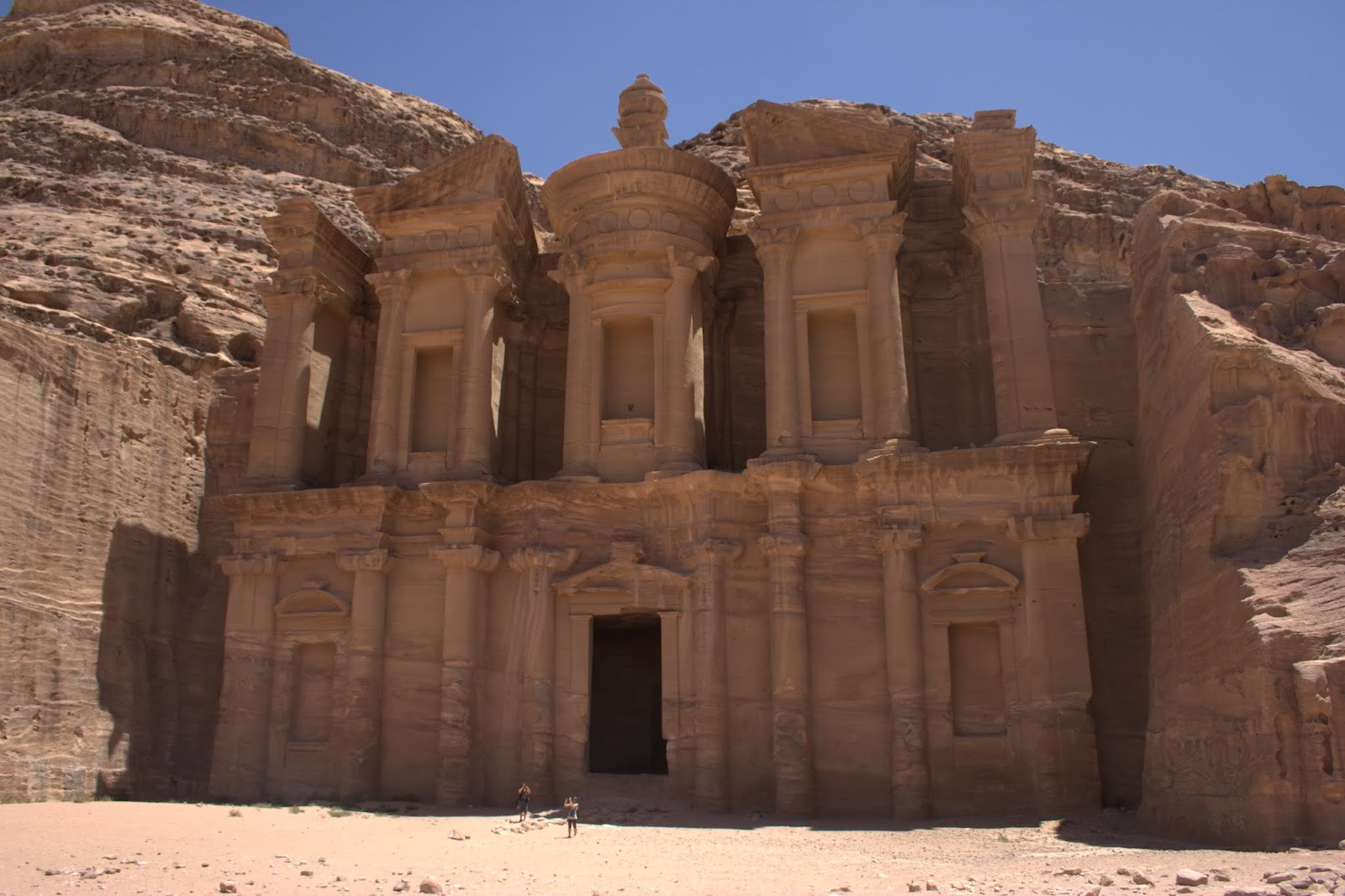 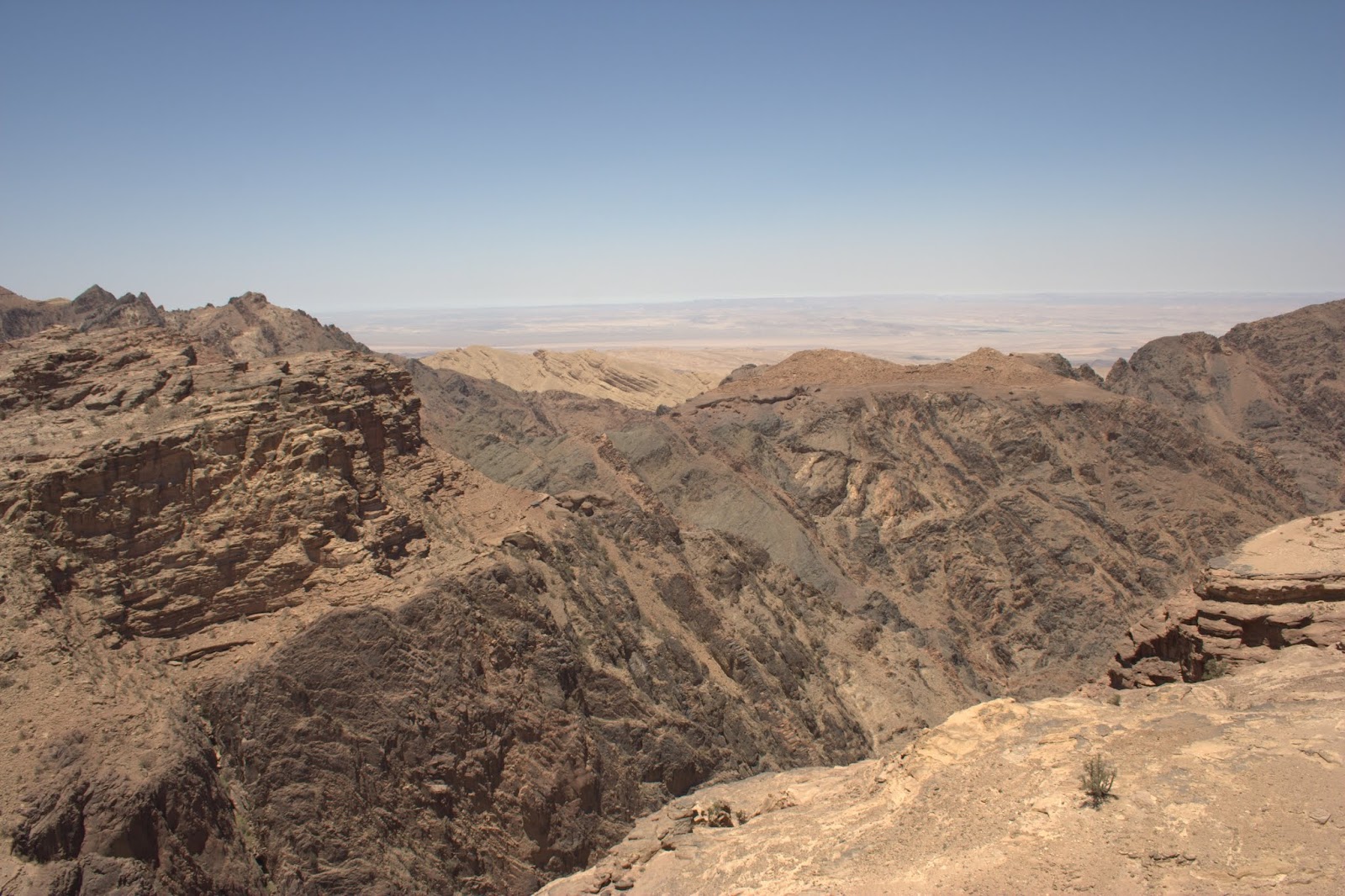 Back down at the level of the Monastery, I drank a well-deserved overpriced Dr. Pepper (they had every kind of soda at the snack shop, of course) and waited for my friends. Apparently their donkeys had gotten loose during one of their stops, so they took longer to get to the top, but I enjoyed watching the interesting assortment of other tourists there while I waited: Germans, French, loud Americans from somewhere in the South, etc. Finally my friends arrived, I took their picture for them, and then began my descent. Twenty minutes down. And then, the hour-and-a-half walk back to the gate through the blazing desert afternoon. I was absolutely miserable. The climb and view from the trail over the valley only barely made that walk back worthwhile. I took the rest of the day off, checking e-mail in bed. 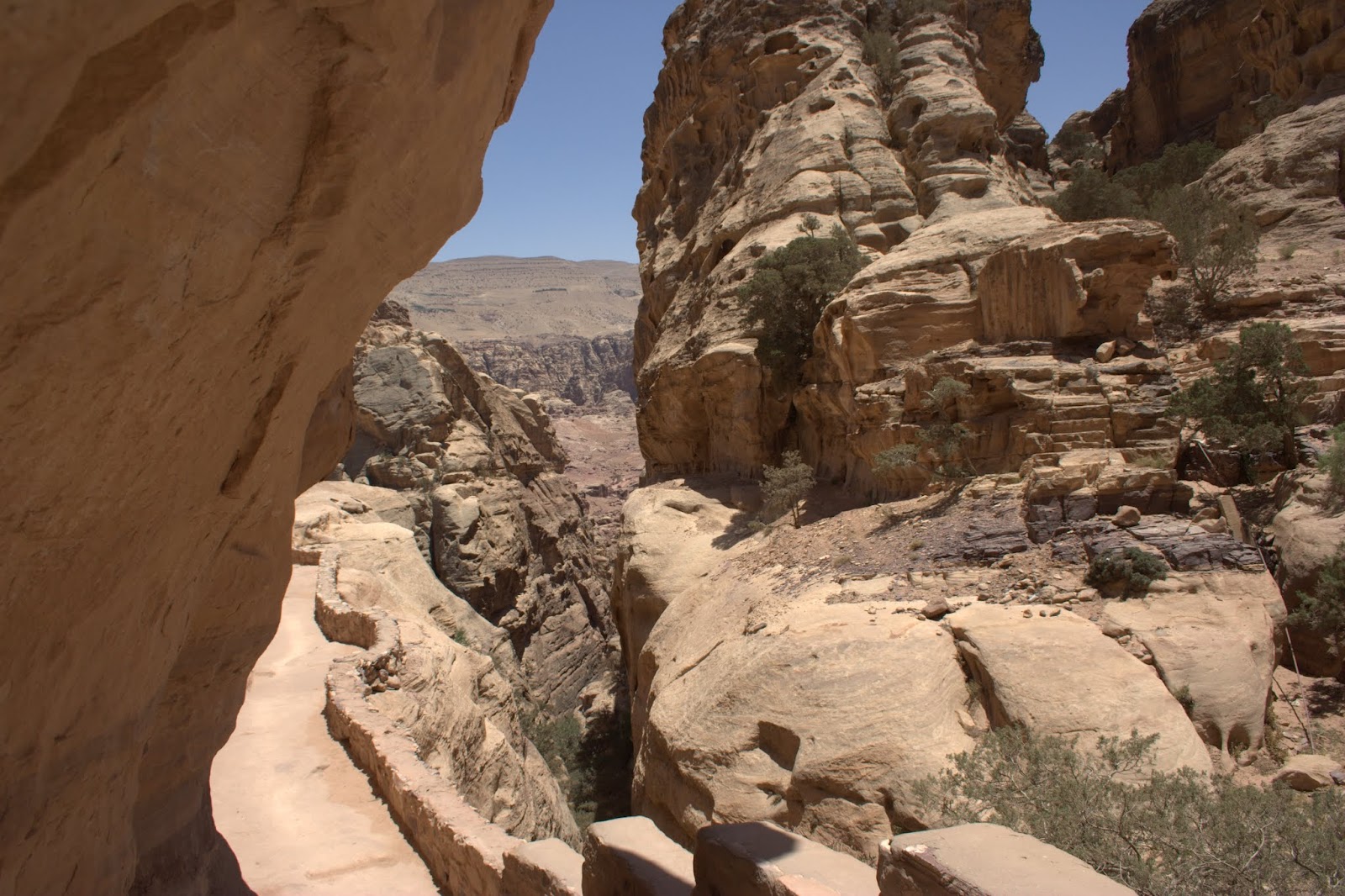 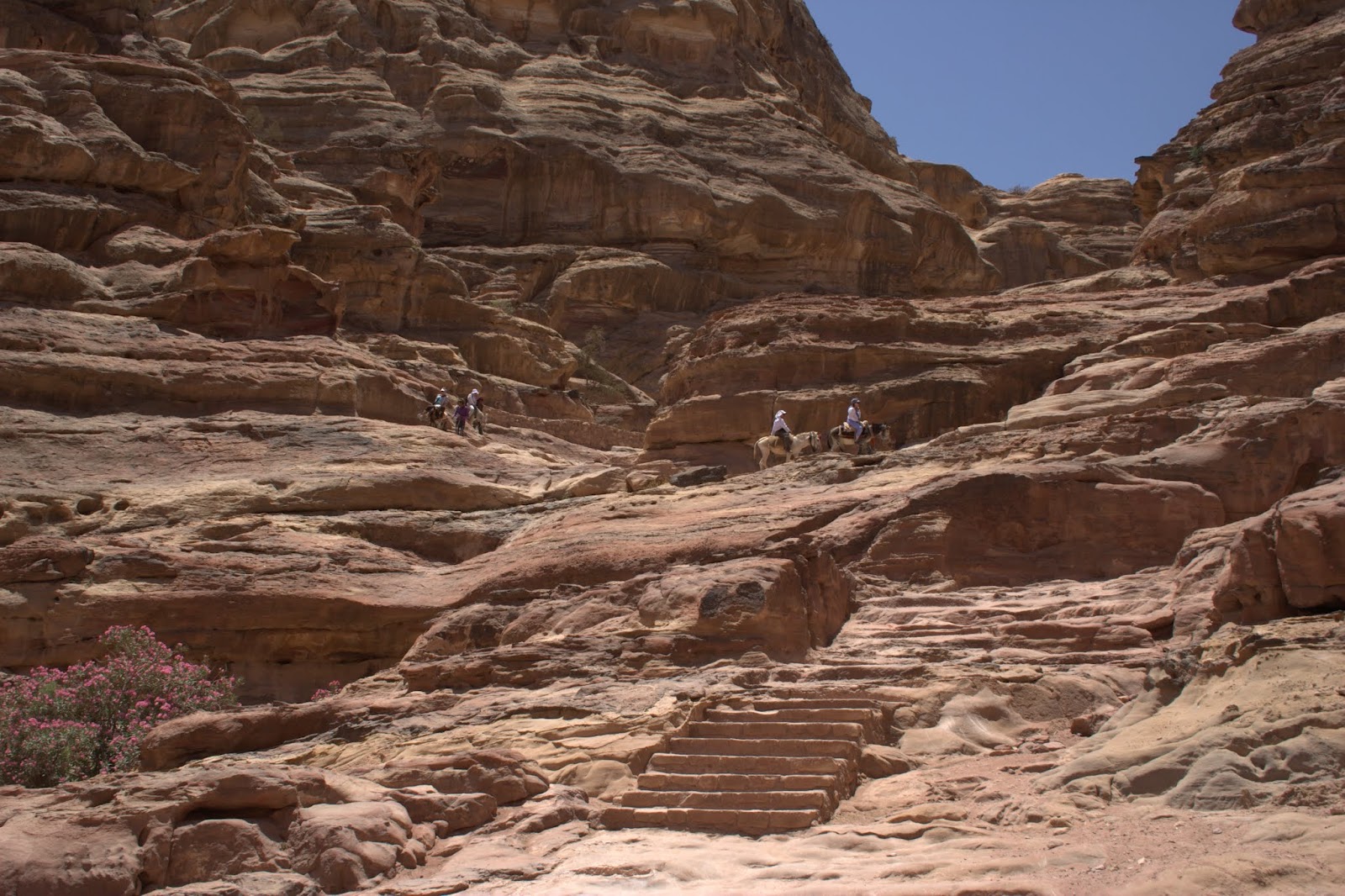 On Monday, the two friends who went with me on Sunday left for home, and it was just me and my roommate for an extra day. In retrospect, we should have left on Monday as well; the extra day wasn’t worthwhile. My friend decided to make the climb to the Monastery, which I wasn’t about to repeat, so I spent my third day at Petra climbing solo through the tombs along the main trail. The trails, if there are any, aren’t really marked, so you can climb over most of the area. I tried to take it very slowly so as not to overexhaust myself. 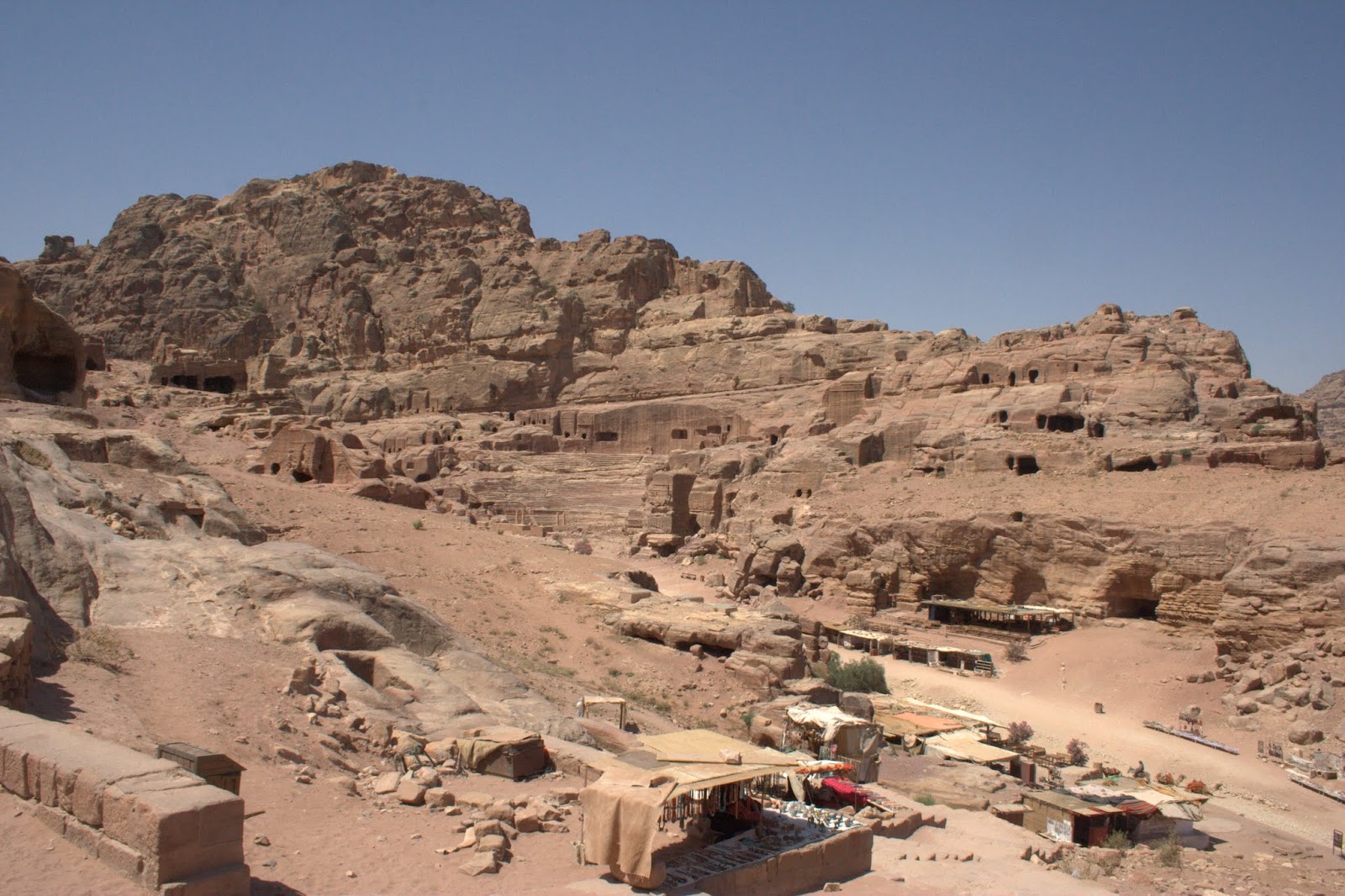 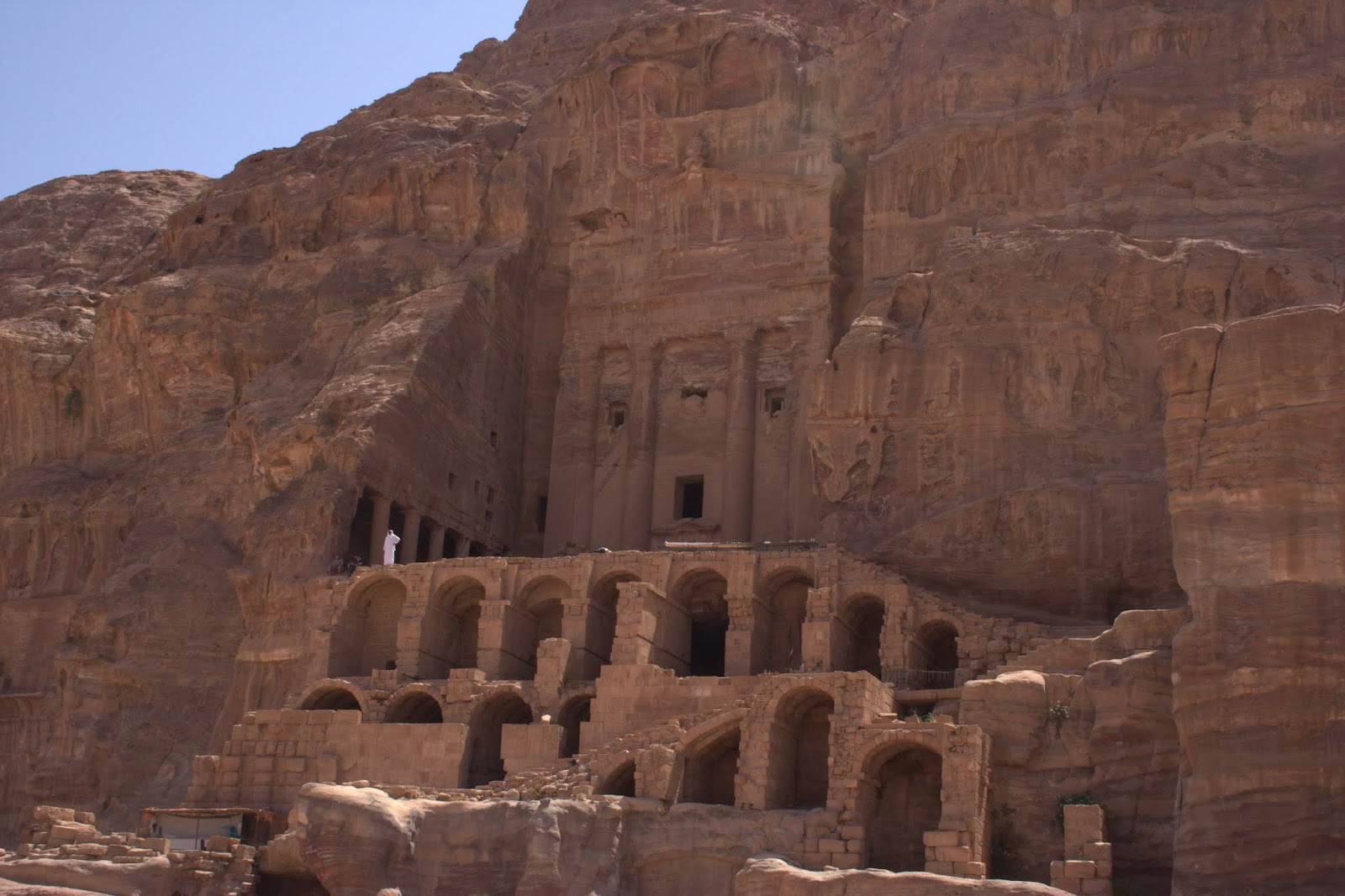 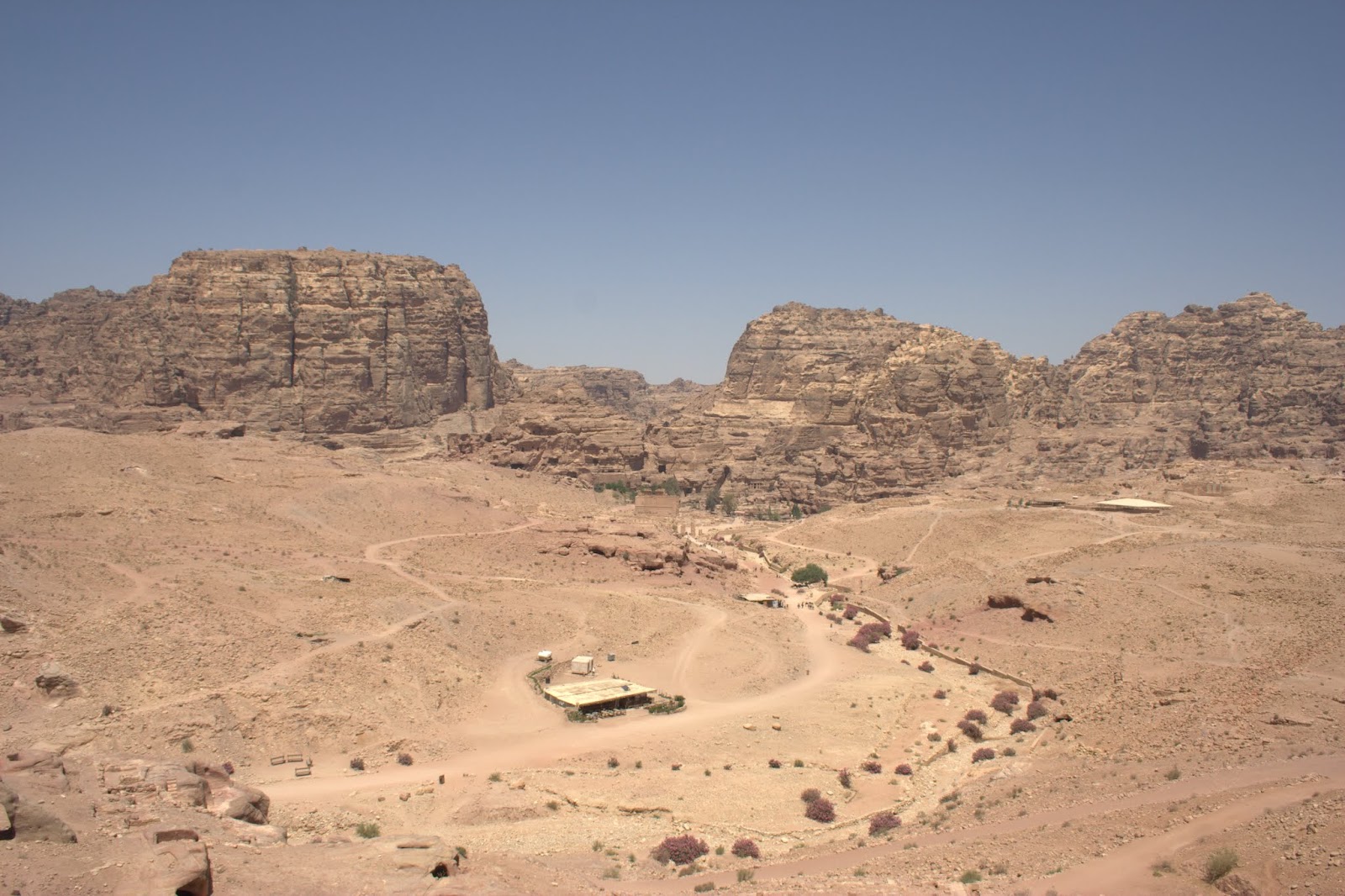 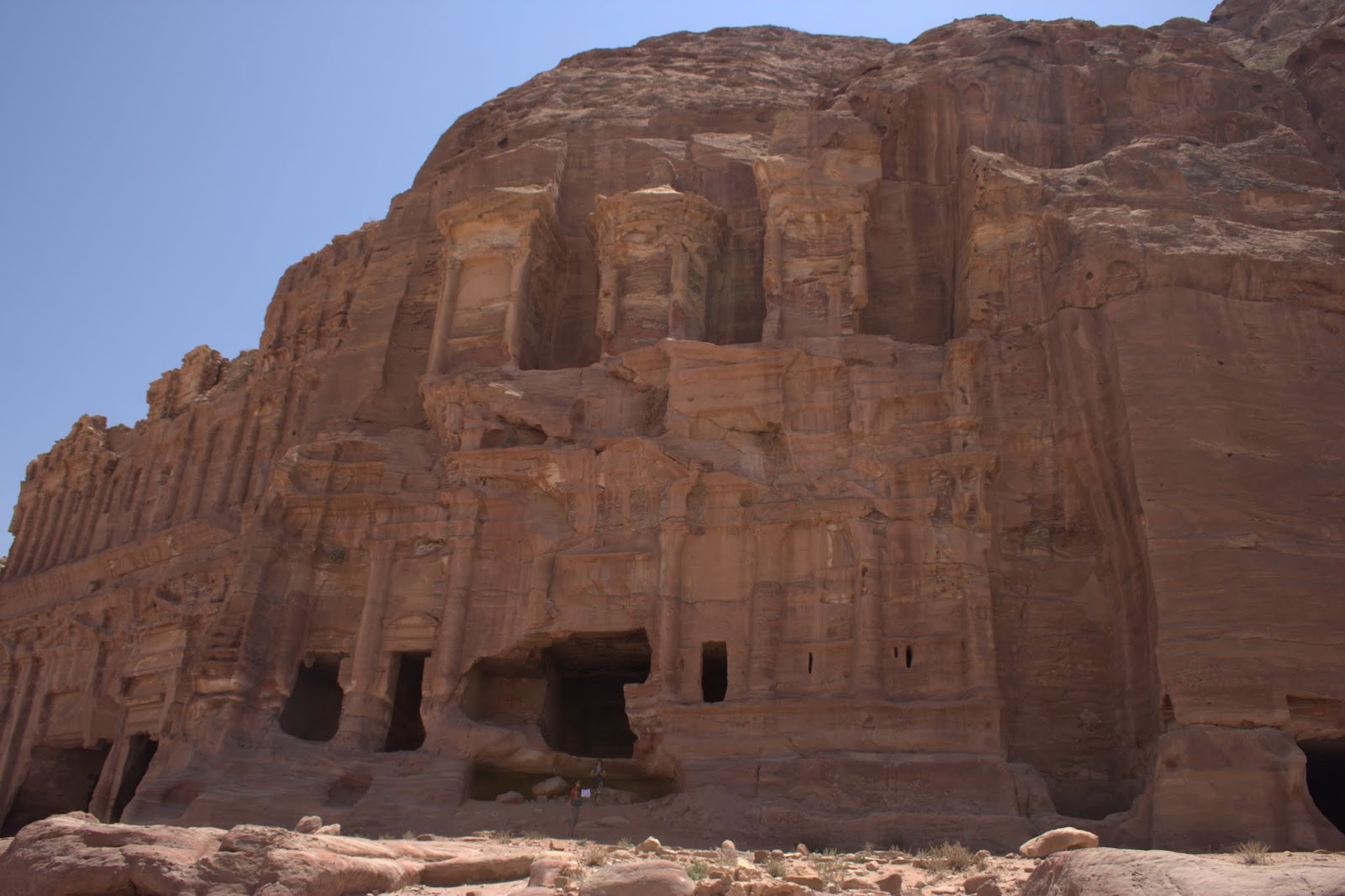 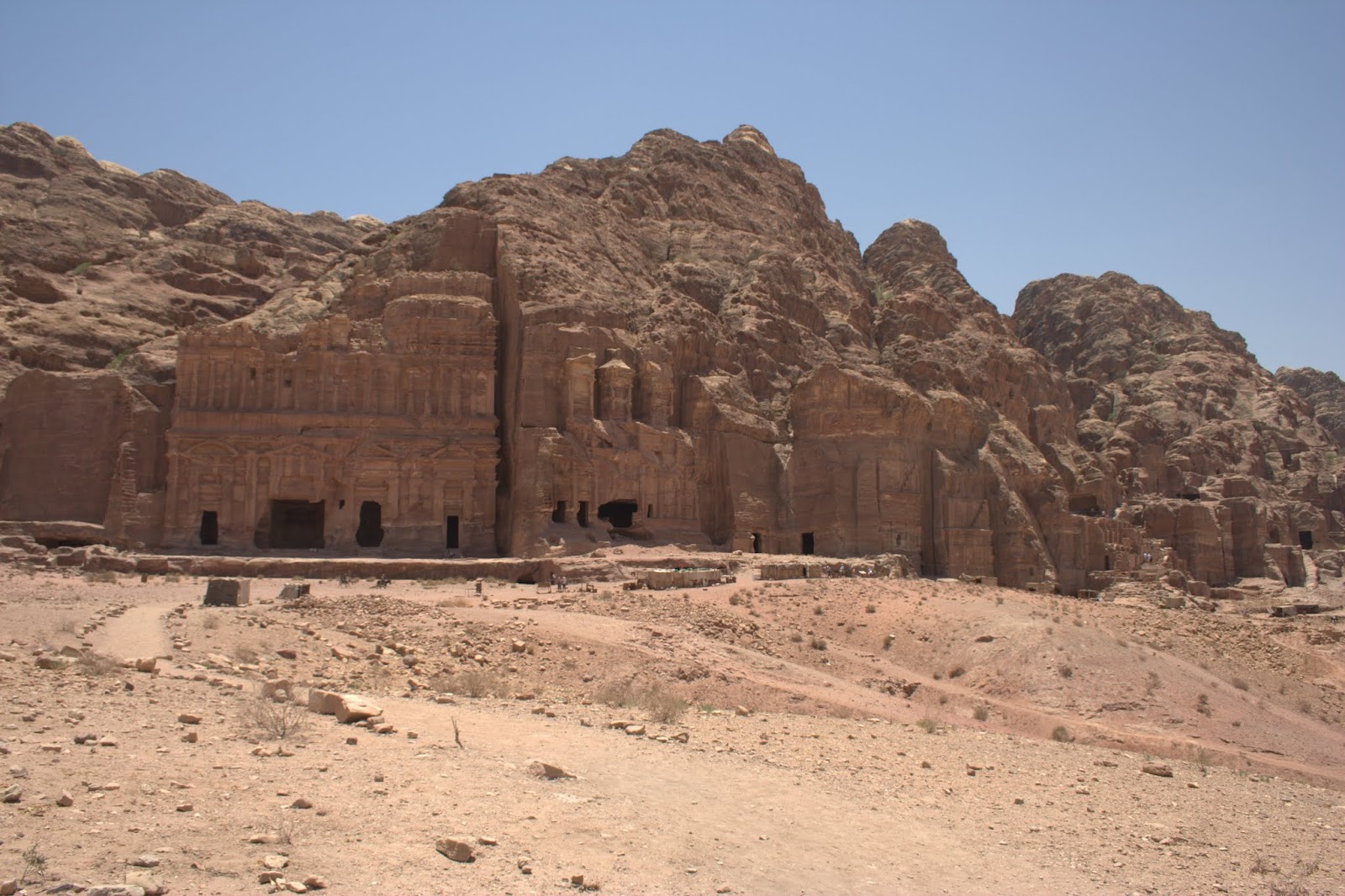 I saw the main tombs from the map, checked out the mosaics in the Byzantine church, and then journaled while waiting for my friend to return. We then slowly made our way back to the entrance - not quite so bad this time since it was already 3pm, later in the afternoon, with more shade - and back to the hotel. 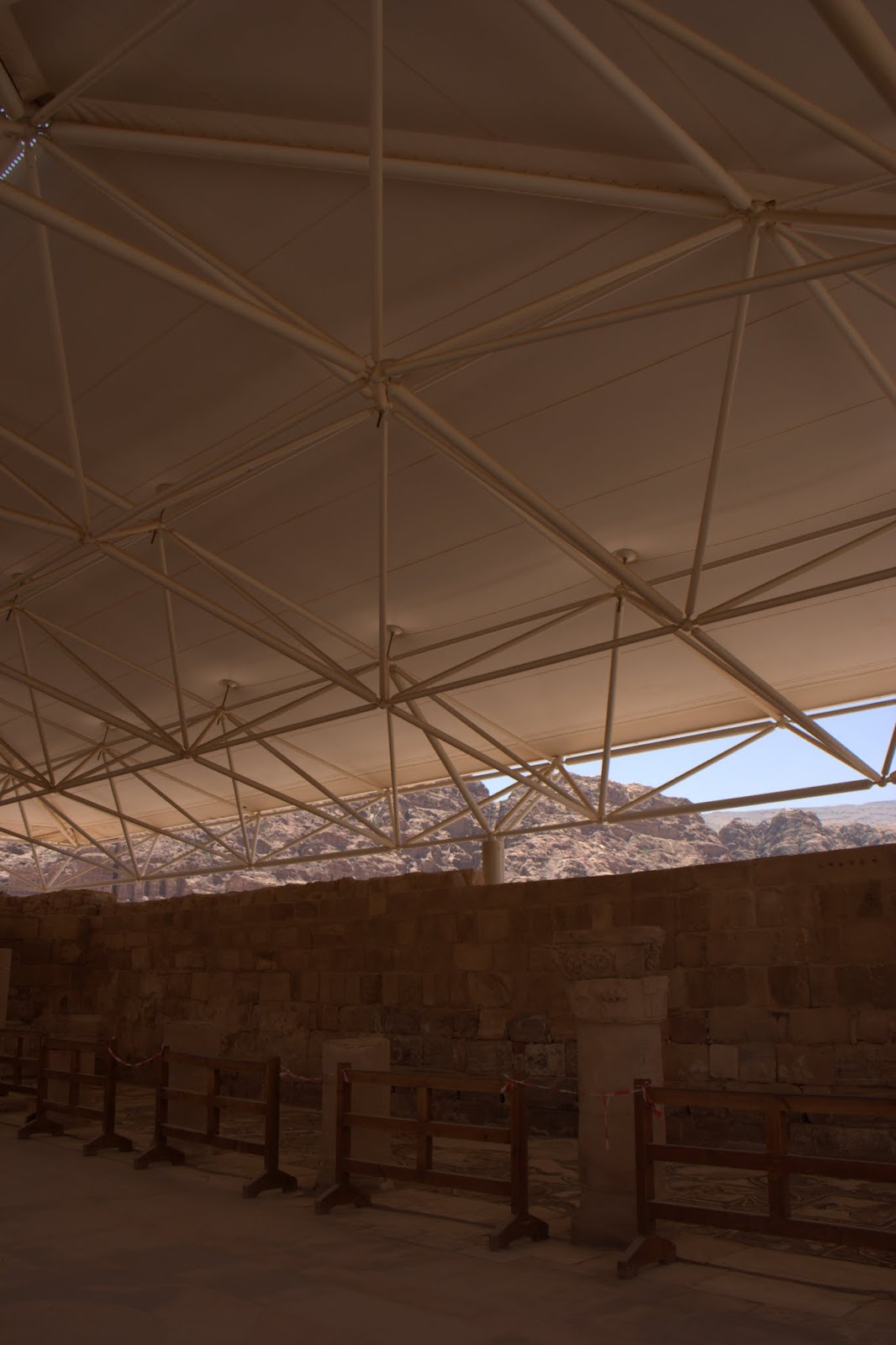 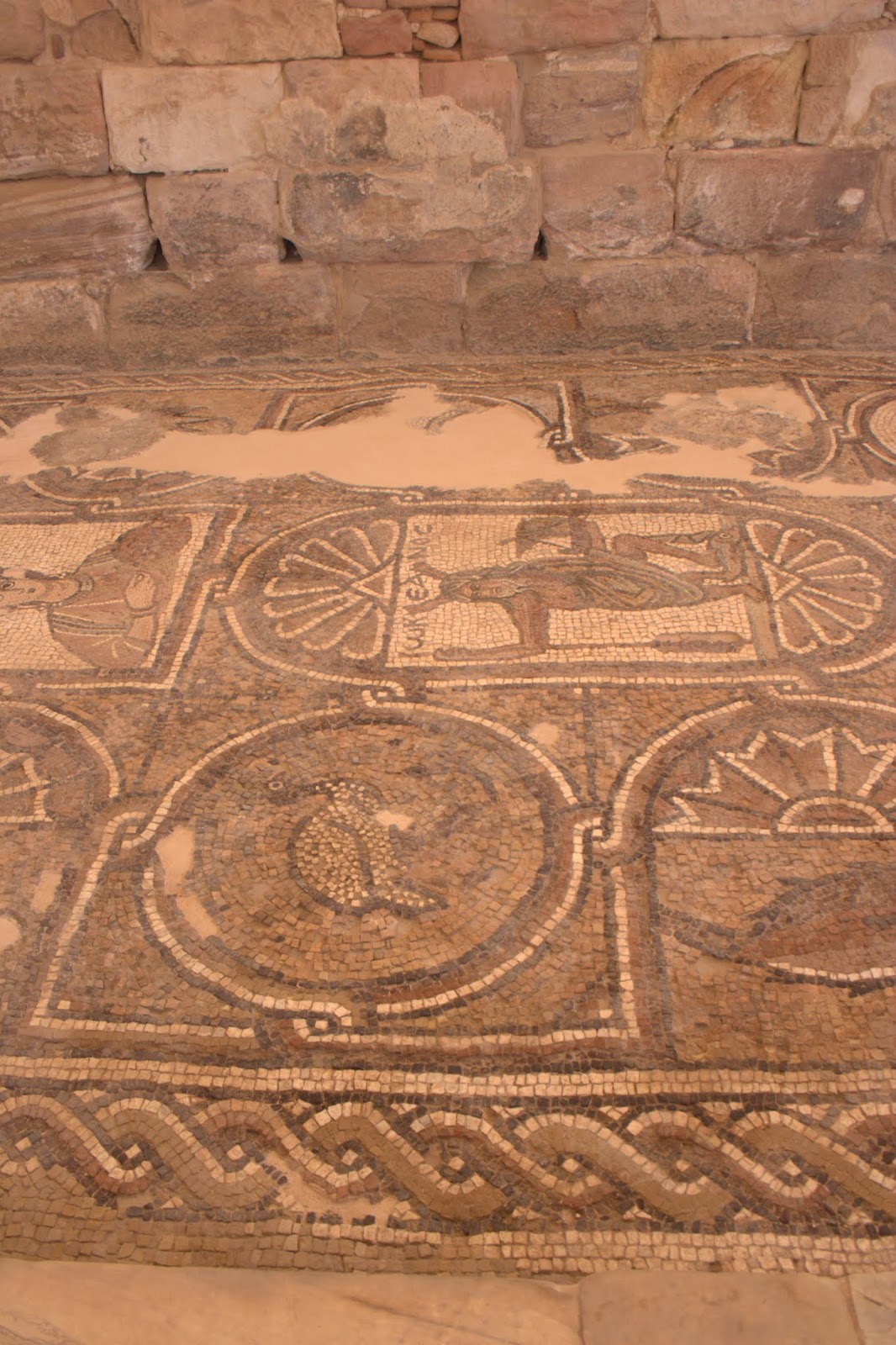 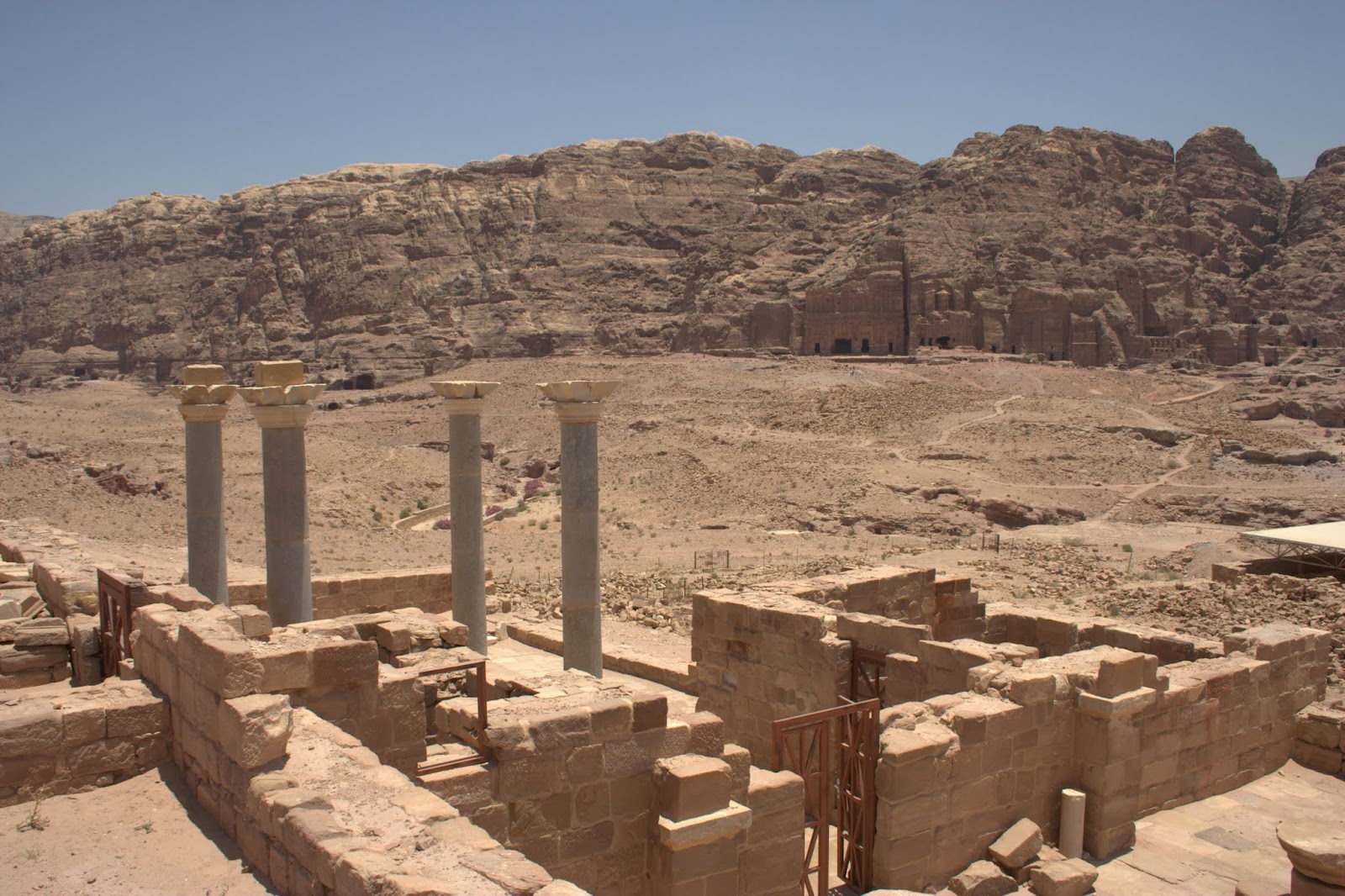 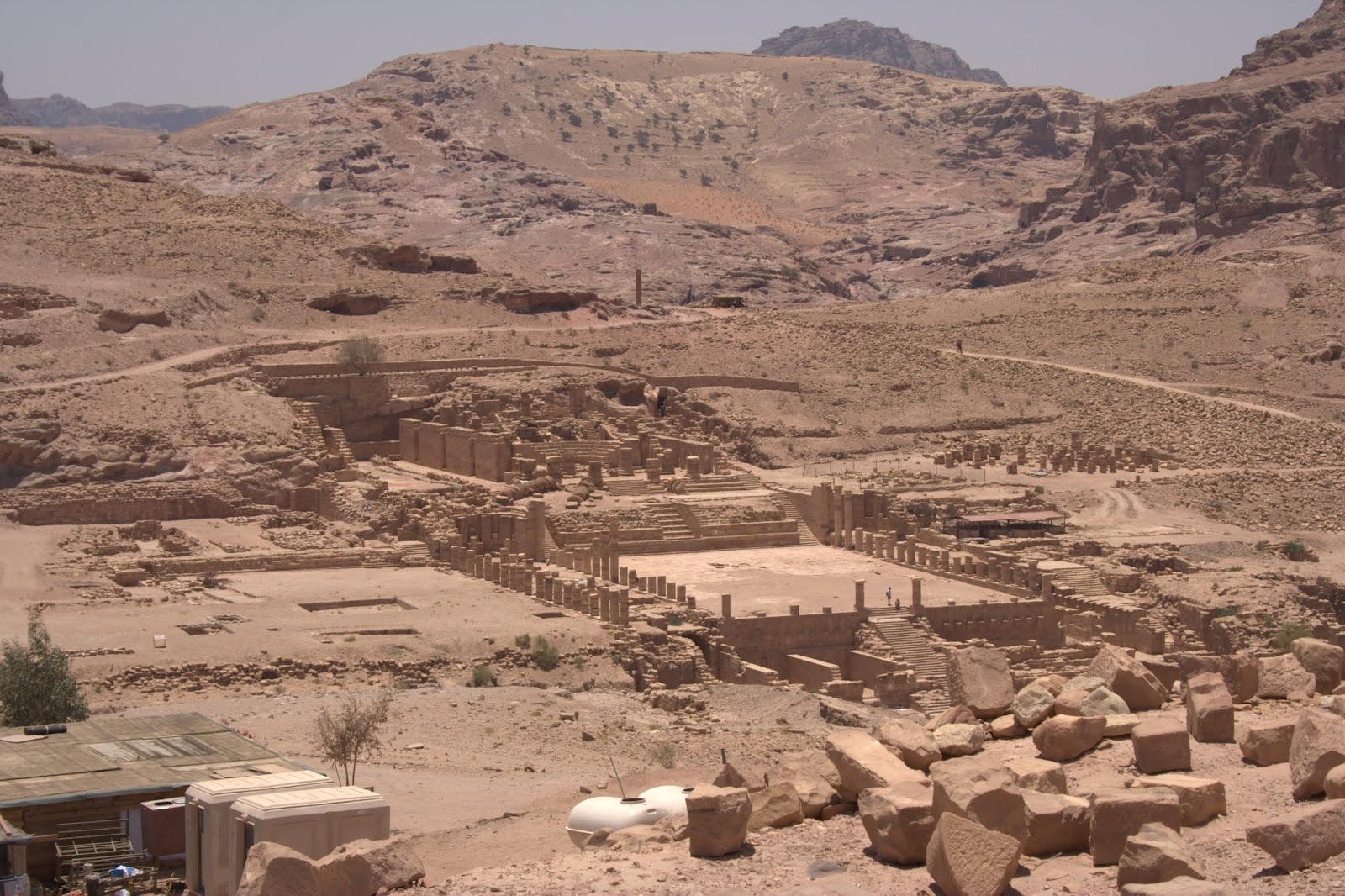 In all, I can’t say that I would recommend the Petra experience, unless you’re a serious hiker or outdoor enthusiast, or if you go in a cooler part of the year, and even then, it’s outrageously priced and full of annoyances. The animals everywhere mean animal leavings are everywhere; the constant hassling was hard for me to take; and there are ugly abandoned shacks in front of every view. Without a guide or guidebook, it’s hard to imagine what life there was like, since all that’s left are empty tombs. It’s not much of an historical site or archaeological site, really; it’s more interesting for its current inhabitants (the Bedouin who run the show) and its rugged natural beauty. 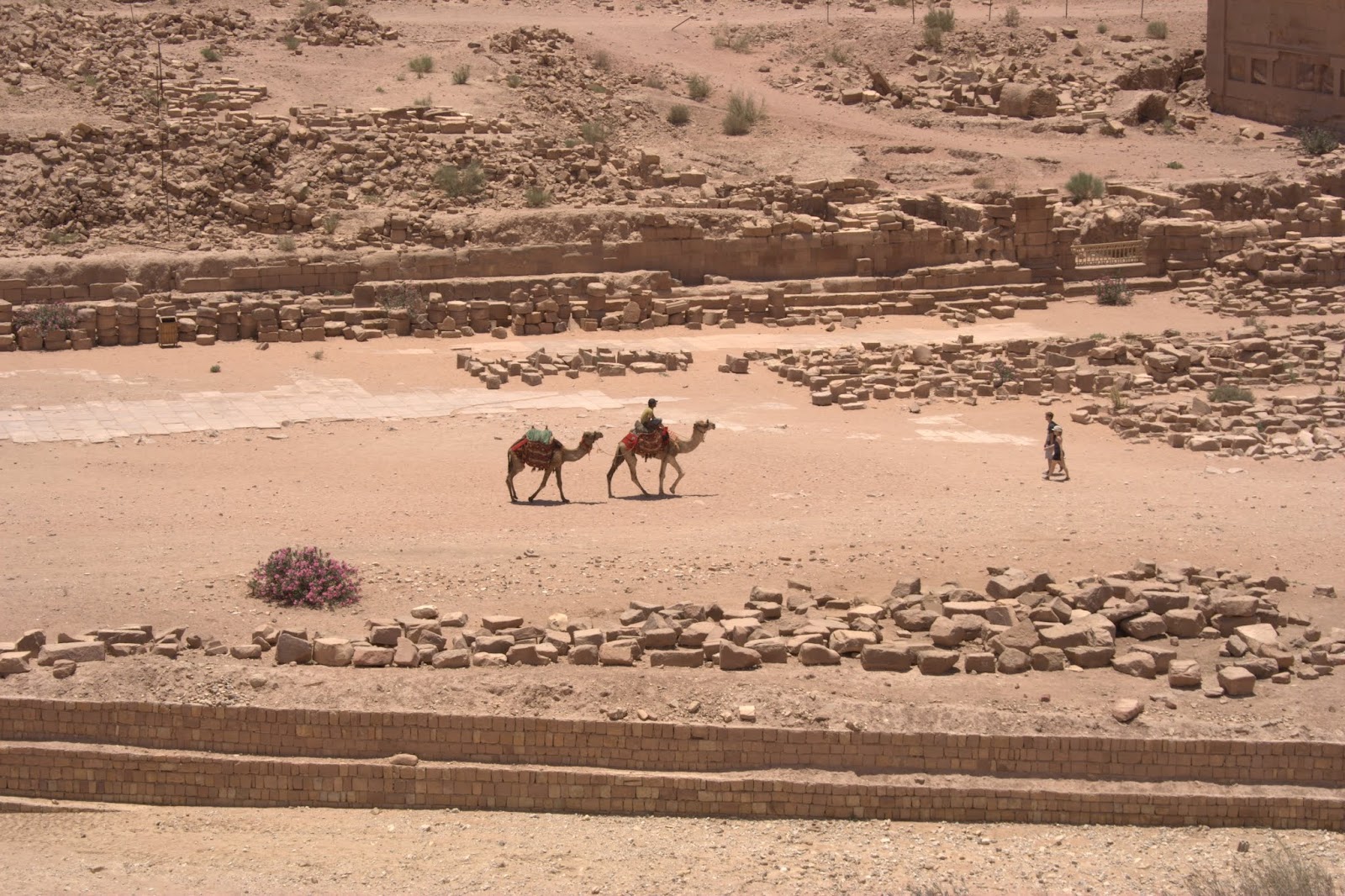 And so, on Tuesday morning, we were ready to go home. We had arranged for a taxi to pick us up through our original taxi driver. At the Allenby Bridge, the same rigamarole, but even more, to cross back into Israel: surrender your passport to the Jordanian authorities, get a retina scan (?!), pay the exit tax, wait for a bus, load your luggage, then wait on the bus. Finally they bring back your passports and the bus makes the 7km trip to Israel across the so-called “bridge.” In Israel, everything gets x-rayed, more passport control, lots of guards with machine guns. Once on the other side, we took a shared taxi to Jerusalem, where the driver dropped us off at a hotel with instructions on how to call for the (different) shared taxi service that goes to the airport. The hotel clerk helped us out by calling, and within an hour (after having a snack at the hotel bar) we were on our way to the airport. We had to go through a passport checkpoint just to get in to the airport. Once there, to our unhappiness, we discovered that one cannot check in more than 3 hours in advance. We left at noon from Petra because there’s no way to tell how long it will take to make the trip to Tel Aviv - in our case, we arrived by 7:30p, which was pretty good time (for perspective, it’s 128 miles, which in the US would be a 2-hour drive on the highway). My flight was first, at 12:40am, five hours later. So we waited in the terminal, had dinner, and finally around 10pm I went to check in.

Since I didn’t have any luggage, I tried to find a way to print my boarding pass and head into security, thinking that that would be the normal way to do things, but not in Israel. Everyone goes into the first security line, where the young Israeli officer asks you questions like: “What is the origin of your last name? Did you visit any family or friends here in Israel? Do you know any Hebrew?” and is extremely surprised if you don’t know any Hebrew. (I also surprised my seat-mate on the plane by explaining that I had never studied Hebrew in school, and didn’t know many people who did.) I suspect that something about my lack of Hebrew knowledge got me flagged for special search, since after finally getting my boarding pass, I was put in the much shorter, but much slower, Line #2. At first others wanted to join our special shorter line, but as it grew obvious that their longer lines were moving much faster, those of us in my line realized we were in for special treatment. My bag got put through the x-ray machine twice, then checked inside and out with the gunpowder wand, and I then had to remove all my electronics from my bag and have them scanned twice on their own. (You can imagine how many electronics I had - netbook, cameras, lenses, etc.) Finally, my safety scissors were discovered. “Why do you need these on the plane?” the security guard asked. I was confused, and replied, “Because I need to take them home with me.” (These types of scissors are allowed on all US flights.) Apparently they wanted to know why I hadn’t put them in my checked baggage, but I didn’t have any checked baggage. “Then they’re going to stay here in Israel.” Ok then. Goodbye, safety scissors. Enjoy Tel Aviv.

At last I was through, and the rest of my trip home was uneventful. I suppose I should be grateful that I didn’t get any further questioning, since it’s common for people who are known to have visited Arab countries (like Jordan, as I had that same day) to receive special questioning. I had the comfort of knowing that my US passport would be enough to get me through, no matter what. What’s most disturbing is to think that many residents of Israel and the West Bank cannot do what I just did - cross from Jordan to Tel Aviv in a day. They cannot cross into Israel at all without special permits from the West Bank, and Arab citizens of Israel receive “special treatment” at every turn, especially at the airport.

To my friends and family, thanks for reading along with me so far - this nearly concludes my special segment on Israel/Palestine! Look for one more post in the next week or so of my concluding thoughts about the trip, and some more architecture-related reflections.