This spring, all my fellow third-year GSAPPers and I have the privilege of traveling as part of our studio, thanks to the William Kinne travel grant provided by the school. My studio is traveling to Tokyo, Japan! The trip traditionally takes place the week before spring break, allowing students to extend their stay in the visited location through their break; my trip is taking place during spring break, this week, so instead we were excused from studio last week and allowed to head out a week early. Justin came with me, making this our first international vacation together. We’ve been having quite an interesting time so far! I’ll try to break up the trip into a few posts. We started the trip in Kyoto, the old capital of Japan, and home to most of the important sites from Japanese (architectural) history. After four days there we went to Tokyo, where we are now, and will remain for the rest of the trip.

We left Newark at 12:30pm and had an uneventful 14-hour flight to Tokyo, arriving, bizarrely but as expected, at 3:30pm the next day. Along the way I watched “Cloud Atlas,” which I really enjoyed, and “Wreck-It Ralph.” And tried to sleep. Apparently Benadryl has very little effect on me, so I didn’t sleep very well despite my best efforts.

After arriving at Narita, and picking up SIM cards, JR rail passes, etc along the way, we took the Narita Express (NEX) train into the city to Shinagawa, where we boarded our shinkansen (Hikari) bullet train to Kyoto. (Note: if you want to get a NEX-Suica transit card for use in Tokyo, which saves you money on the Narita Express, you can only buy it at the airport. We missed this bit of info and found out only after it was too late, and couldn’t get the cards.) As a group of eight we didn’t manage to make very good time through the airport, so we arrived in Kyoto after 10pm, struggled through the subway system, and finally found our hotel. I have been surprised, pleased, and often amused to see the amount of English and/or romaji (Roman) characters used everywhere, even in places where it’s not needed and makes little sense, including for slogans of stores and banners where nothing else on the sign is in English. But at least, thankfully, all the street signs, bus stops, etc are labeled in romaji so we haven’t had any difficulty identifying our stops.

We stayed at the Royal Park Hotel “The”Kyoto, which despite its strange name was lovely and a great place to stay, well-located and very nice. I definitely recommend it. The first night there we were too tired even to leave the hotel room so we ate some granola bars and went to sleep.

Our first full day in Kyoto, we ventured into the northwest part of the city to see an area especially rich in temples. We had pastries for breakfast, and discovered the wonder of Japanese pastry shops: you take a tray and tongs, pick out whatever pastries you want from the displays around the shop, then take them to the register where they wrap them all up for you. My favorite are the cream-filled buns. Buns with various fillings seem to be de rigeur: red bean, matcha (green tea), strawberry, cherry, cream, and more are available in every shop. There are also breads with nuts, and some European-type pastries like eclairs and croissants, and buns filled with various meats (haven’t tried any of those). We’ve had pastries for breakfast every day so far!

We hopped on a bus with our one-day bus passes while munching pastries and rode it up to our first stop, Kinkaku-ji, better known at the Golden Pavilion. (Buses in Kyoto seem to be the best way to go; 220 yen [roughly $2.20] flat fare, they run very frequently, and we’ve never had to wait for one.) Kinkaku-ji ended up being one of the most touristy places we visited, crowded with all types of people (mostly Japanese but I also heard French, German, English, and more). The entire site has a fairly strict itinerary laid out that takes you immediately to the pavilion and then through the gardens around it. The pavilion itself it indeed beautiful (and shiny!), although the gardens weren’t the best we saw. 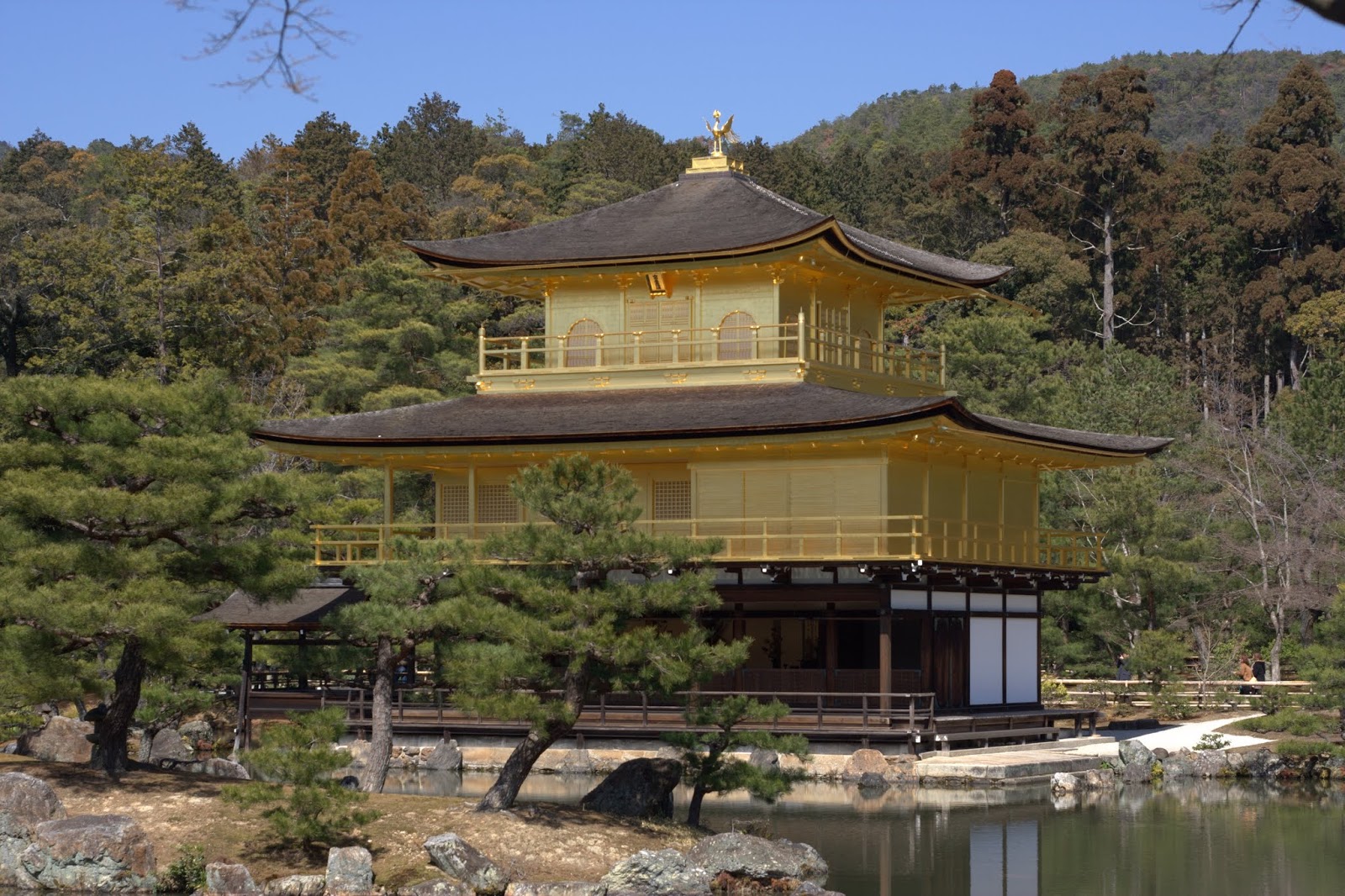 We then walked to our next stop, the Zen Buddhist temple of Ryoan-ji, about 20 minutes up the road. Maybe next time we’d take a bus, since it wasn’t the most pleasant walk, mostly uphill. Ryoan-ji is famous for its rock garden inside the main building. The rest of the site is quite nice as well, with various landscape gardens, ponds, and scenery. We even encountered a friendly bird. 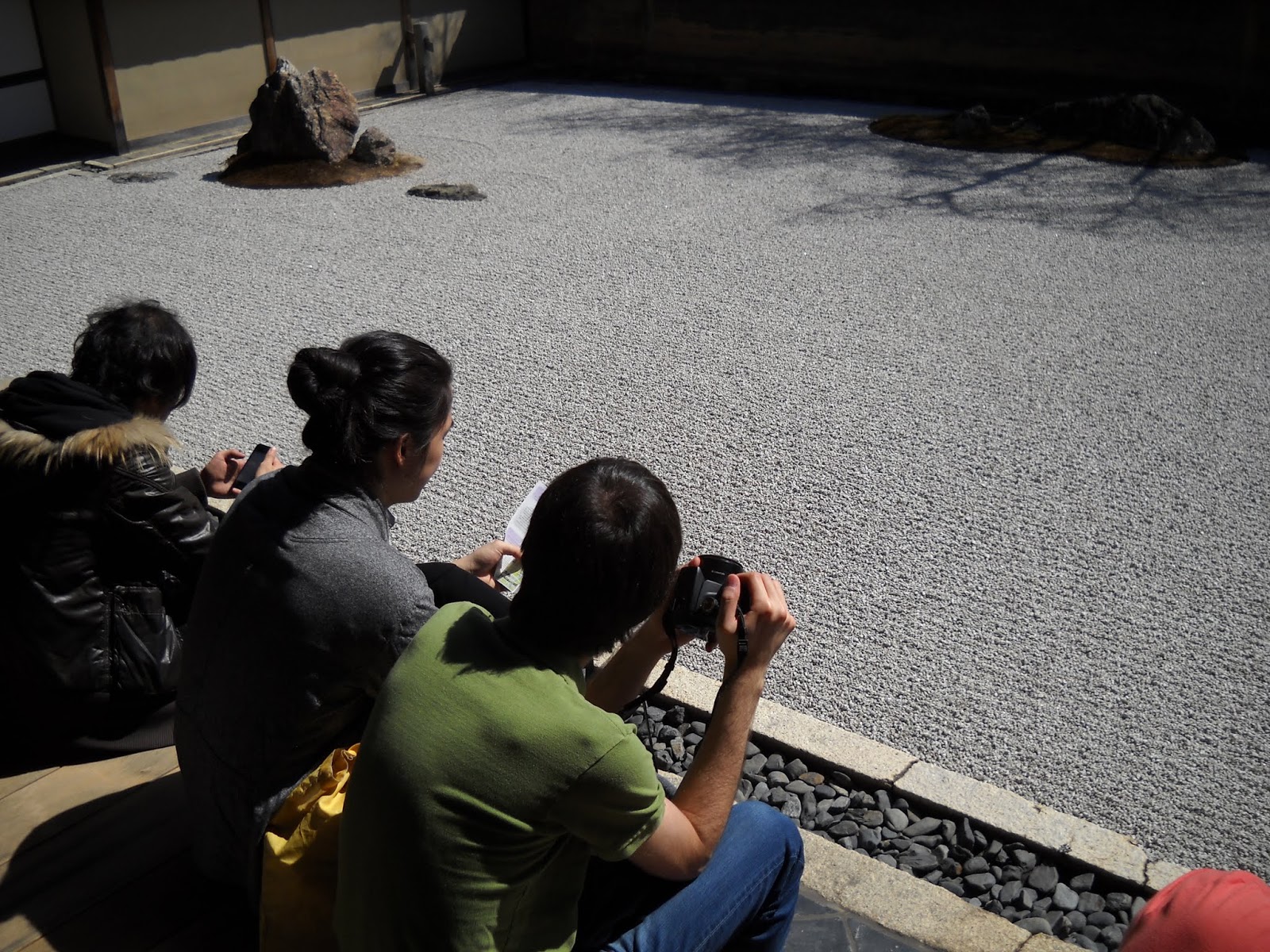 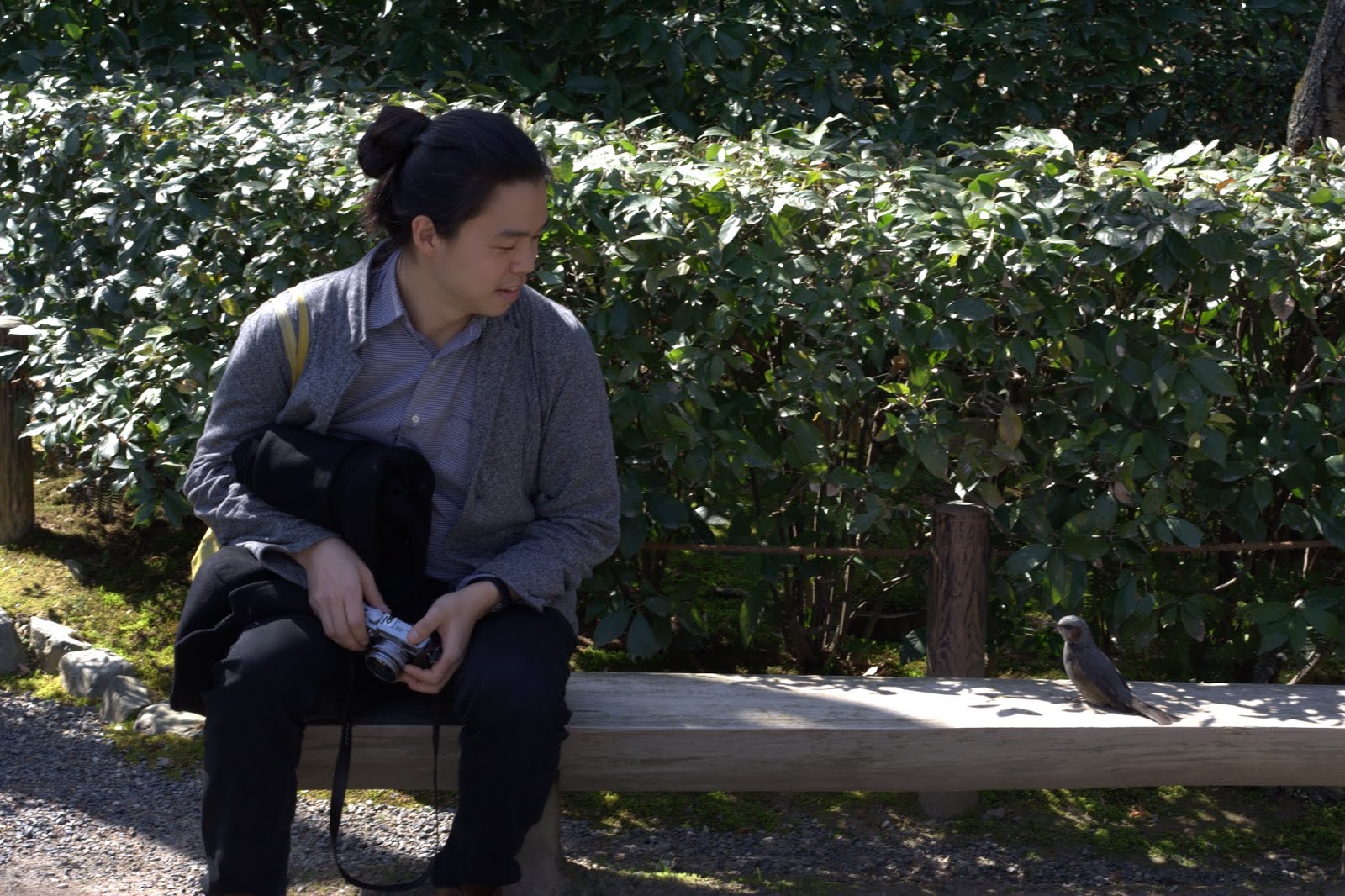 After Ryoan-ji we decided it was time for lunch, so along the way to our next stop we meandered through a suburban-type neighborhood looking for food. We didn’t see anything but asked at a grocery place and discovered that we were standing in front of an udon (noodle) restaurant. Inside there was no English menu nor any English speakers, but the prioprietor brought us a magazine and pointed to a picture of a noodle soup dish. After making sure it was vegetarian, we all ordered the same thing, brought to us by an elderly lady who seemed to be the owner’s mother. The soup was great and we managed to identify nearly everything that was in it! Then we headed off to our final stop for the afternoon, Ninna-ji.

Ninna-ji was quite different from the other two, located in a wide open area that we were free to wander, rather than a set path through a garden. Here we saw our first pagoda, or stupa, up close and a number of other impressive buildings as well. Japanese architecture is largely defined by its roofs: I will probably have hundreds of photos of roofs by the end of the trip. The enormous curved, overhanging roofs, many with gold ornaments, are very impressive up close. 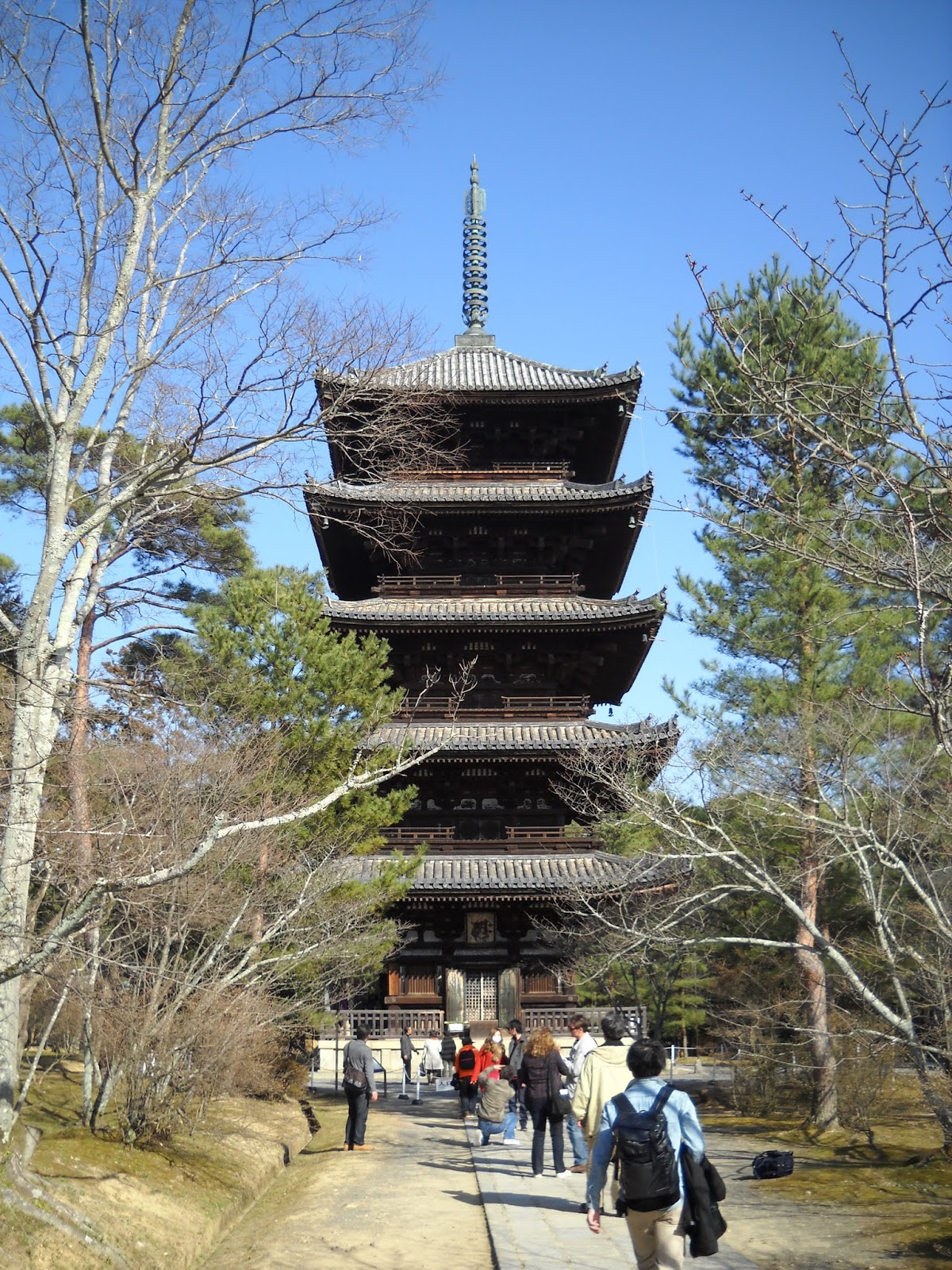 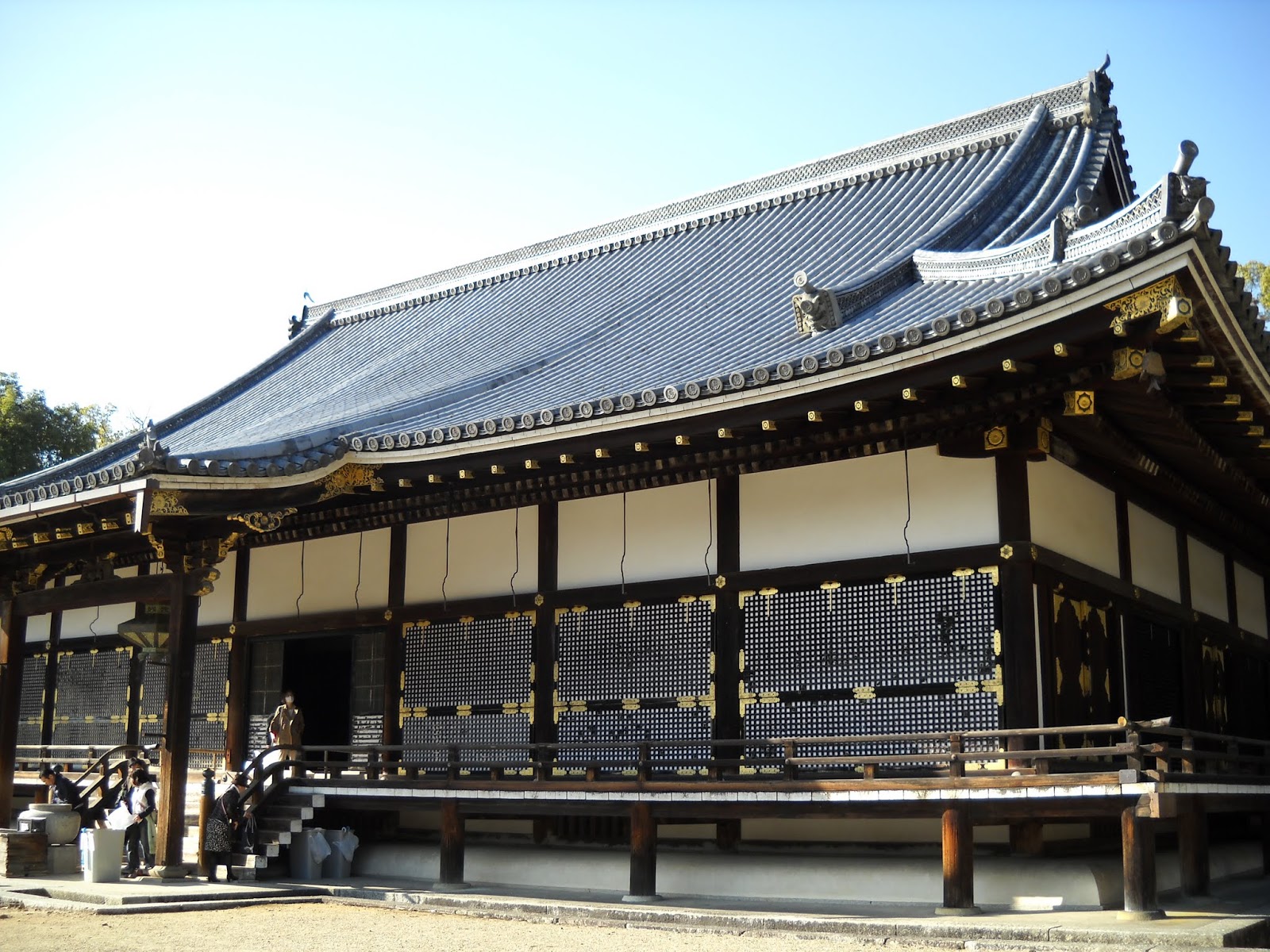 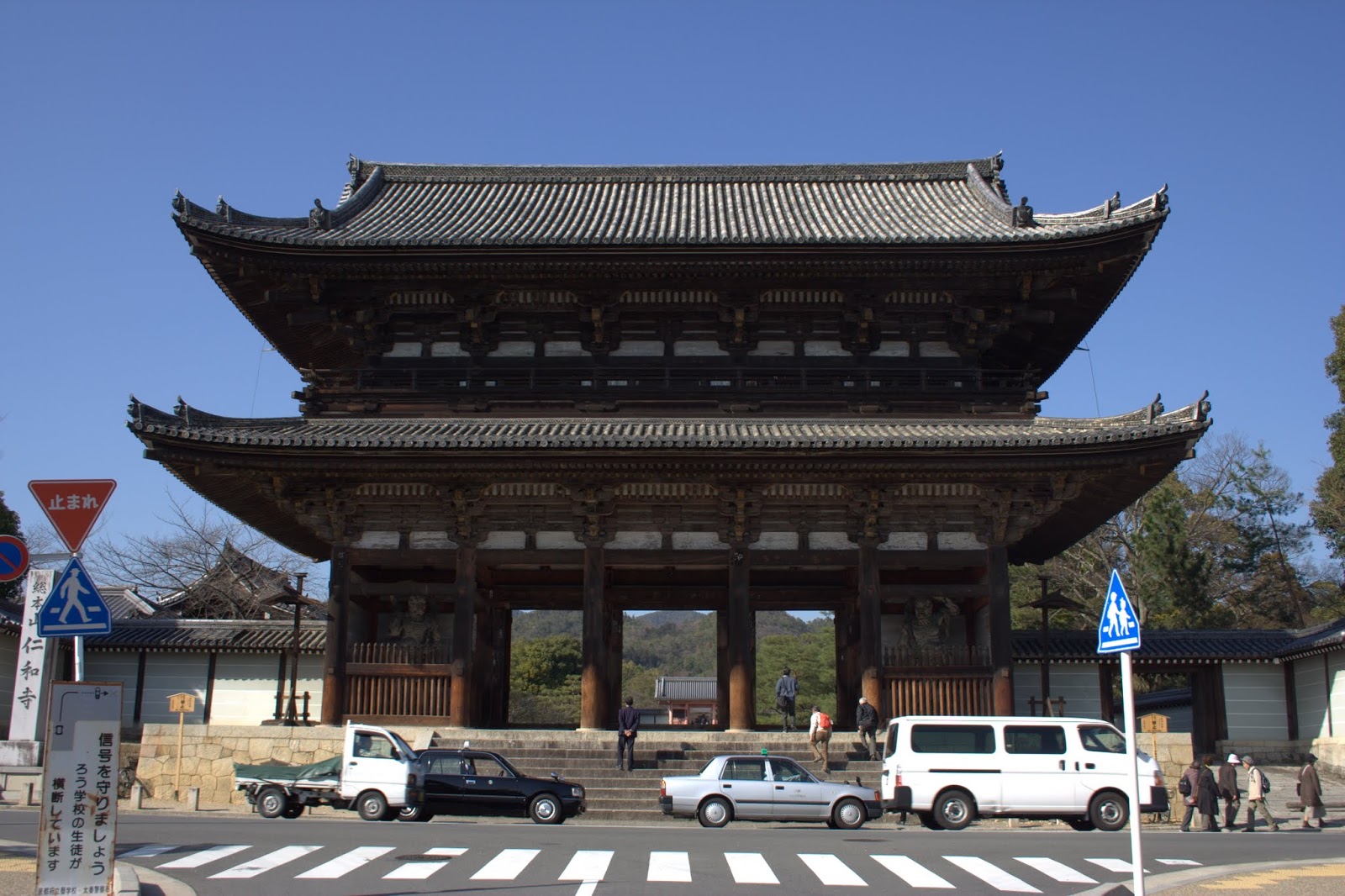 After Ninna-ji we took the bus back to our hotel and crashed until dinner time, when we then headed out on our next adventure, to see the annual lantern festival, Hanatoro, in the Higashiyama district. We happened to be in Kyoto during this week-long festival, and it was definitely an interesting sight! The streets of the entire district, which apparently is normally empty after dark, were lit by (mostly metal) lanterns along the sidewalk, and there were throngs of people out, many of them dressed in traditional garb. We saw a troop of children beating drums through the streets, a take-your-picture-with-a-geisha spot, and tried some street food. Unfortunately we didn’t find a restaurant that would take all of us, so ultimately we split up for dinner. Justin & I went to an Italian restaurant since we were tired of looking for restaurants at that point and wanted to eat something we could identify. It was pretty good, actually, although the waitresses saying Italian phrases with a Japanese accent were pretty hilarious. 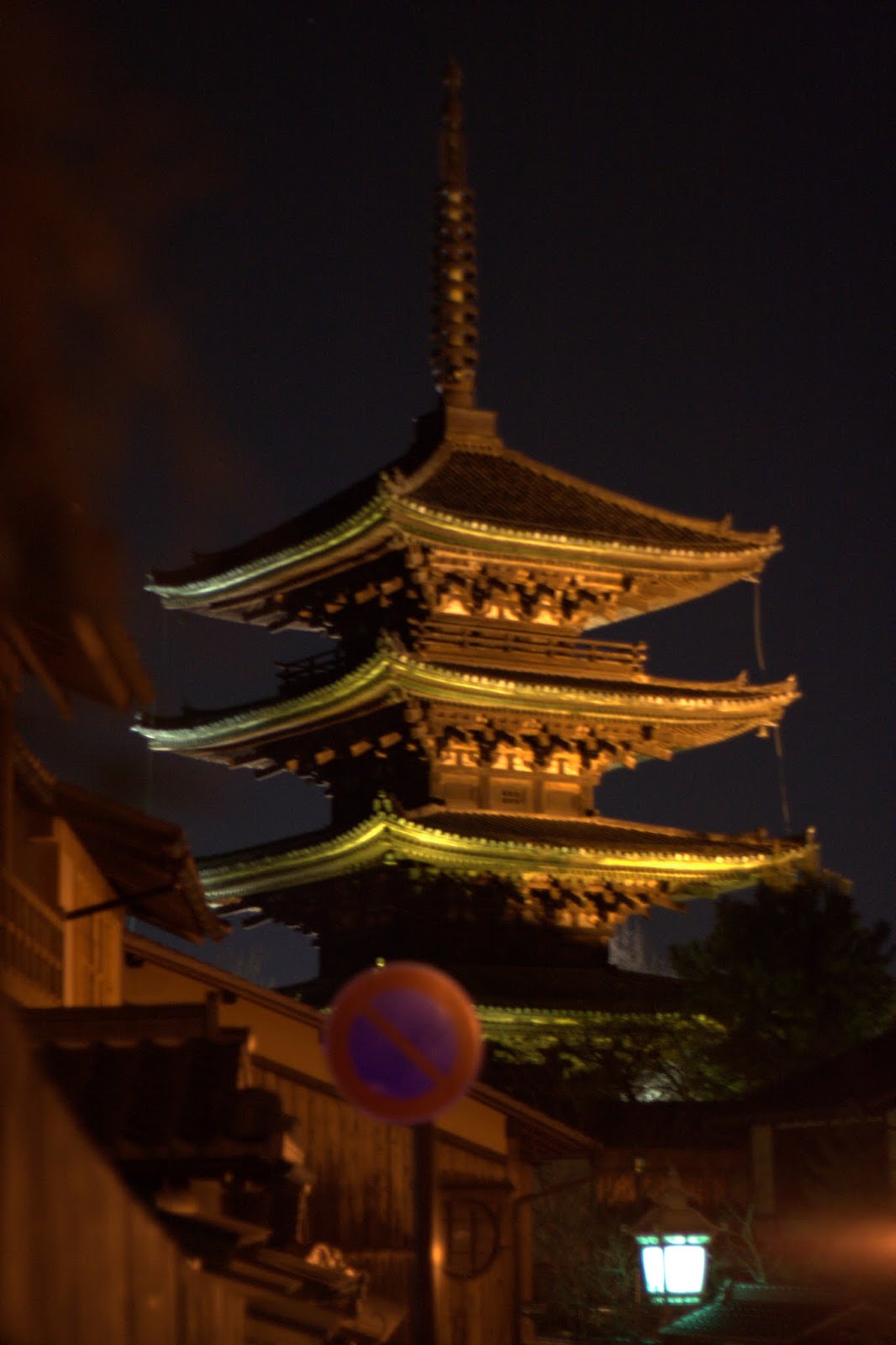 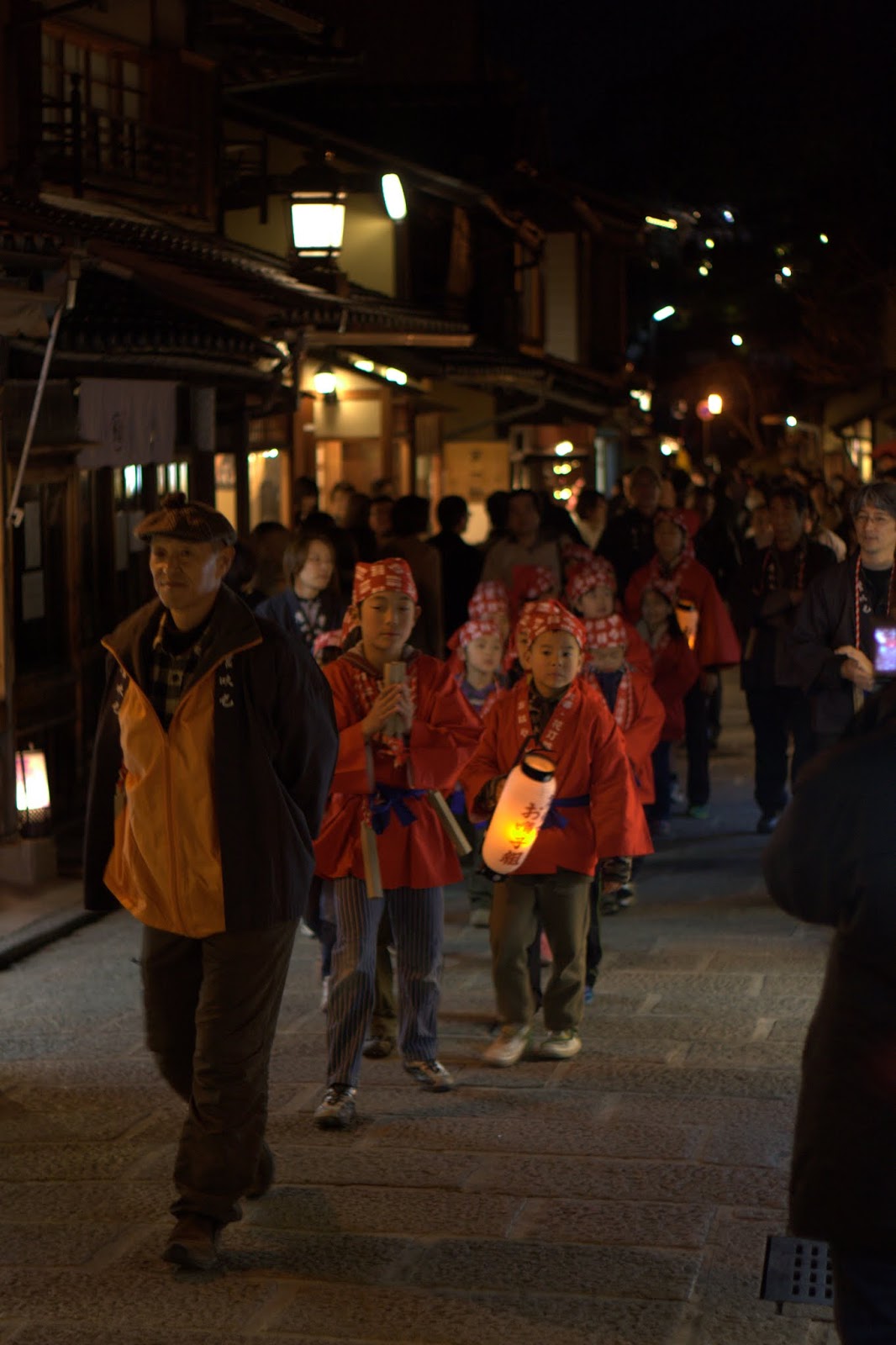