This is part 4 of a multi-part description of my trip to Kyoto and Tokyo, Japan, as part of my Kinne Traveling Fellowship grant through my studio at GSAPP. See also: **first post*, **second post, third post. *To see all my photos from Tokyo, visit my Google+ album here. A map of our destinations can be viewed here.

After our second night at Andon, we checked out and took a bus to our final hotel of the trip, the Gate Hotel Kaminarimon by Hulic. This hotel is owned by the real estate company that hosted us during the studio portion of the trip, so we were all required to stay there for the rest of the visit. The hotel was very nice, with large rooms, friendly staff, a rooftop lounge area, and great views from the “sky lobby” on the top floor. But definitely not cheap.

After dropping off our bags at the hotel, we headed out to explore Asakusa, the historic neighborhood around the hotel, known for its temple, Senso-ji, and the gate after which the hotel is named, the Kaminarimon (Thunder Gate). We saw a ceremony taking place at the temple, where bearers carry elaborate mikoshi (portable shrines or palanquins) around the temple, shaking them and chanting. Then we got lunch and some delicious sweet potato confections (although not necessarily in that order). Mmm, sweet potatoes - that is one Japanese culinary specialty that I fully support. 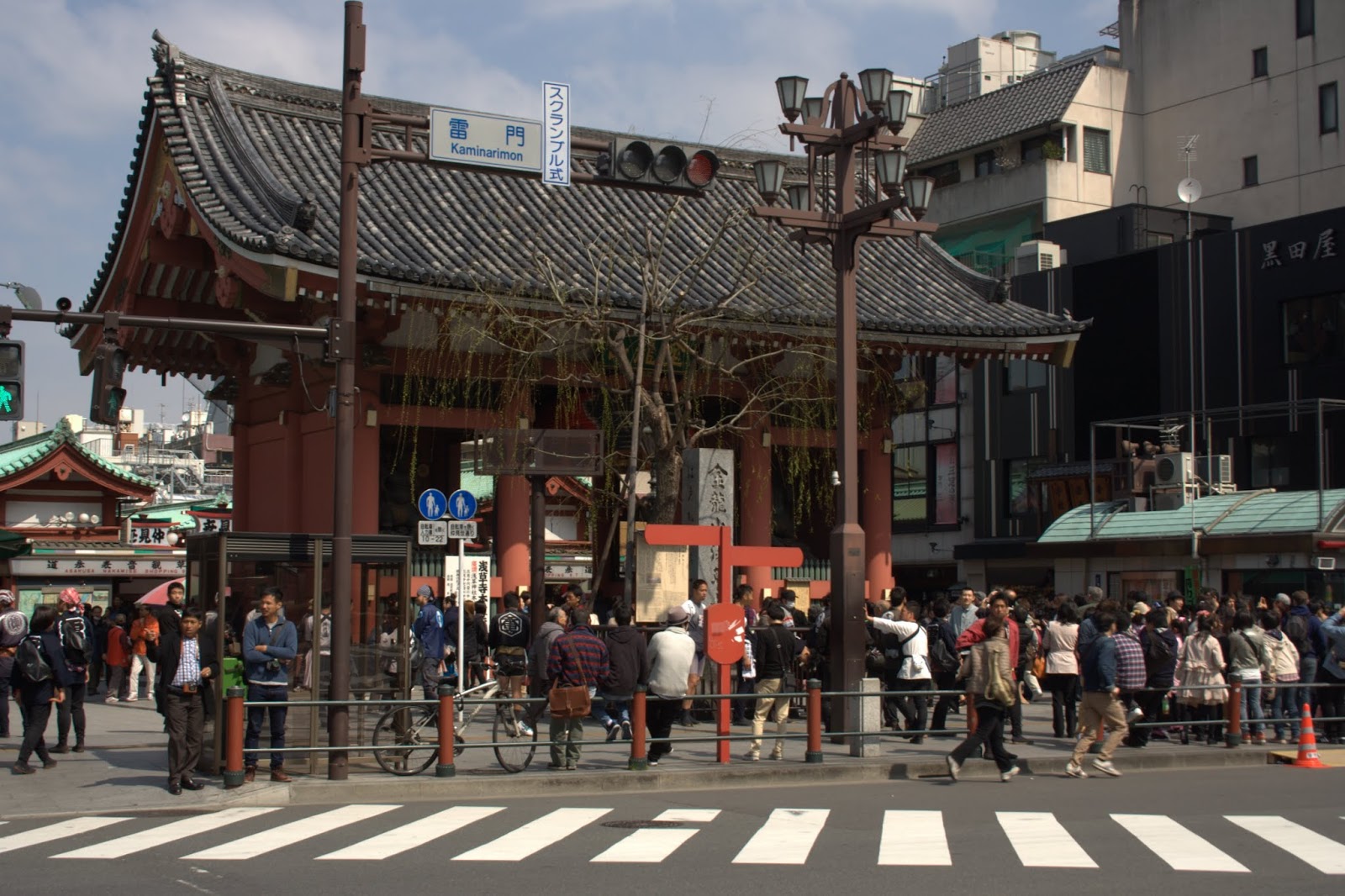 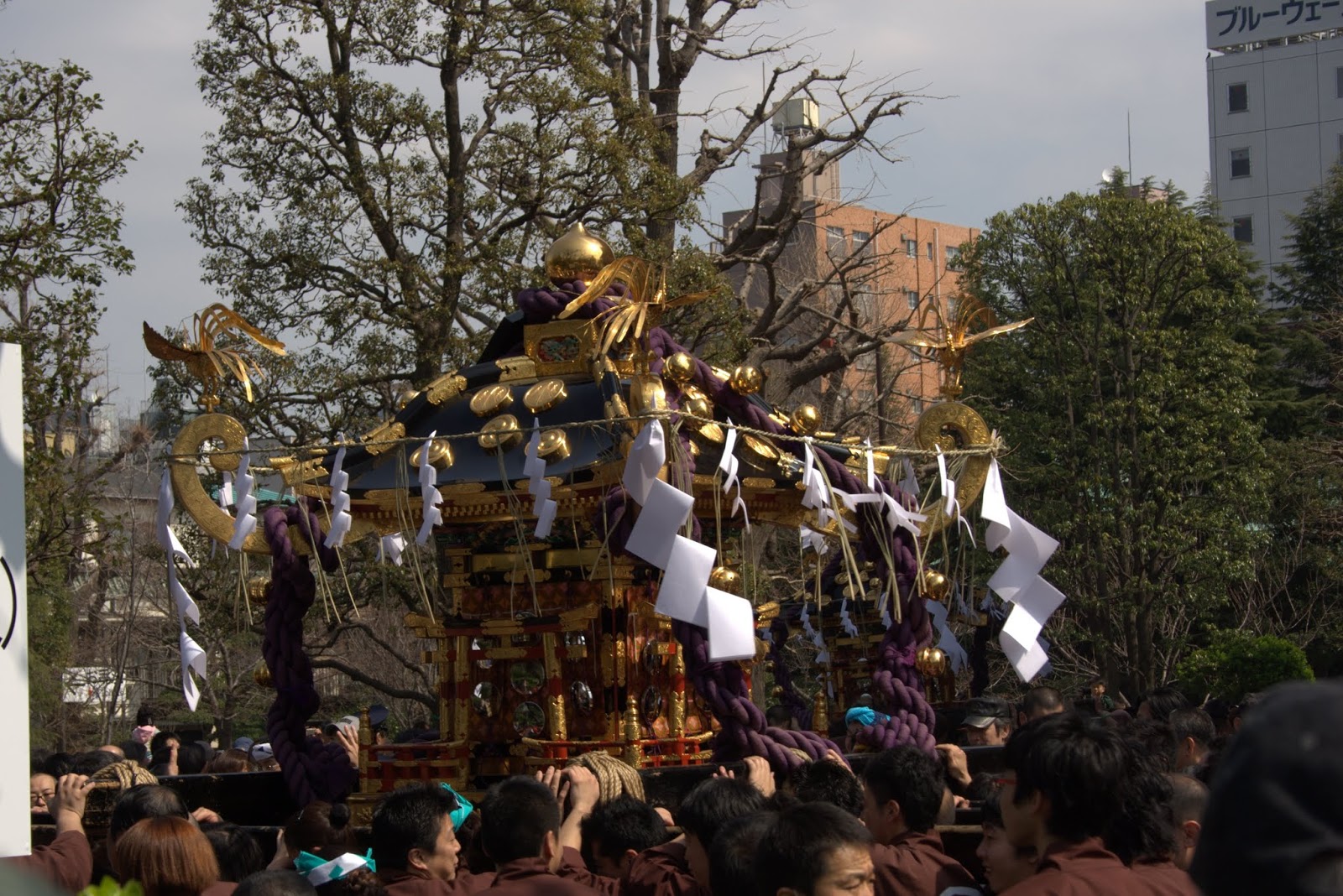 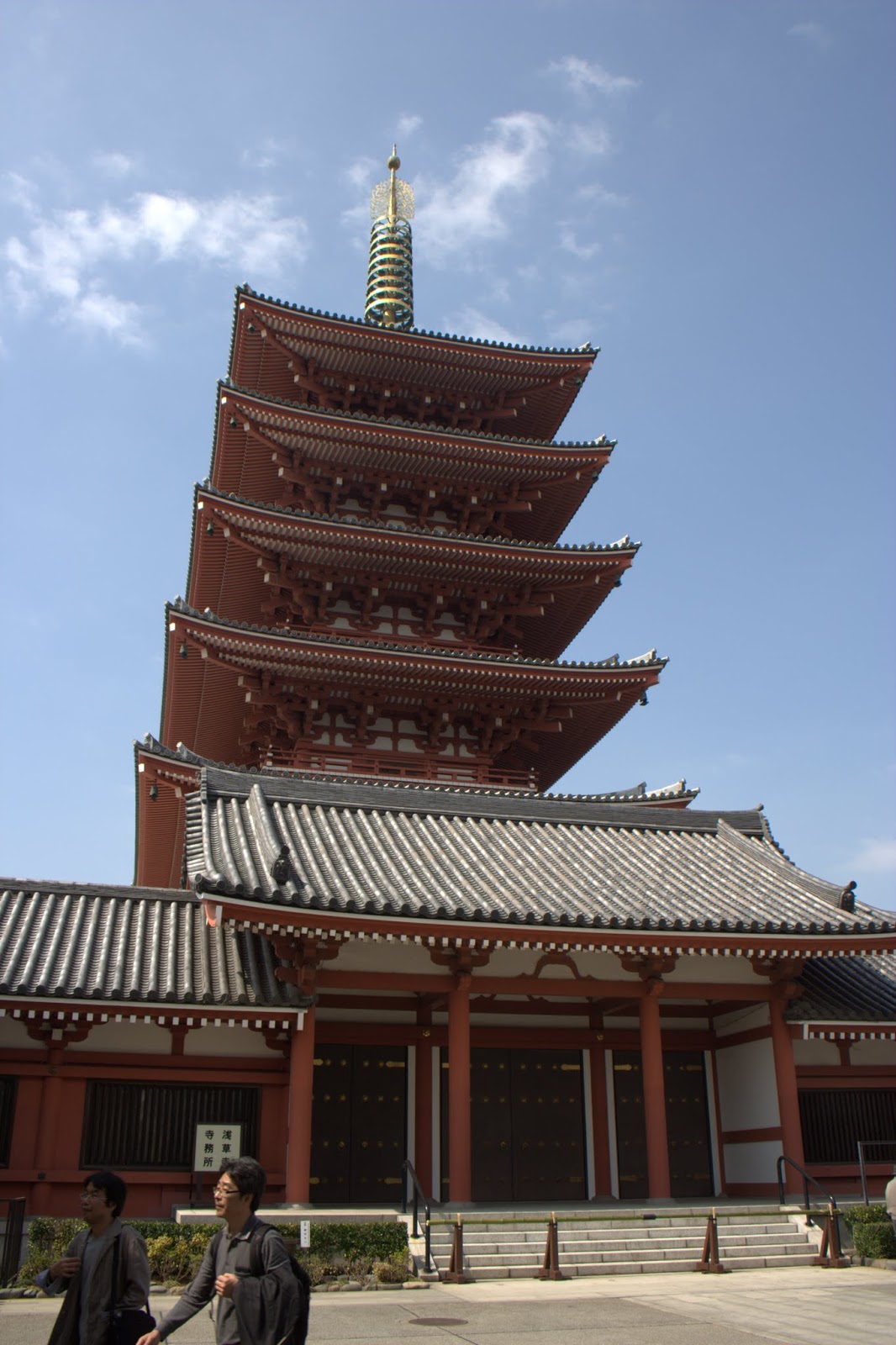 We were able to check in after lunch, then Justin took a nap while I went back out with some of my classmates to visit the Tokyo Forum again - there was a flea market going on - and to see some of the grounds of the Imperial Palace. From there we took the train over to the Tokyo Metropolitan Government Building (aka Tokyo City Hall or Tocho), one of the main government buildings for all of Tokyo. Designed by Kenzo Tange, it’s just plain enormous, and I wasn’t sure how it was supposed to resemble a computer chip, as the guidebooks claim. We went up to visit the free sky lobby on the 45th floor, but as it was getting dark, it was a bit hard to see. The entire floor was full of chintzy gift shops playing annoying commercials, so it wasn’t the most peaceful view of the city, but still fairly interesting. I felt compelled to buy a Tokyo/Darth Vader/Eiffel Tower mug because of its sheer absurdity. 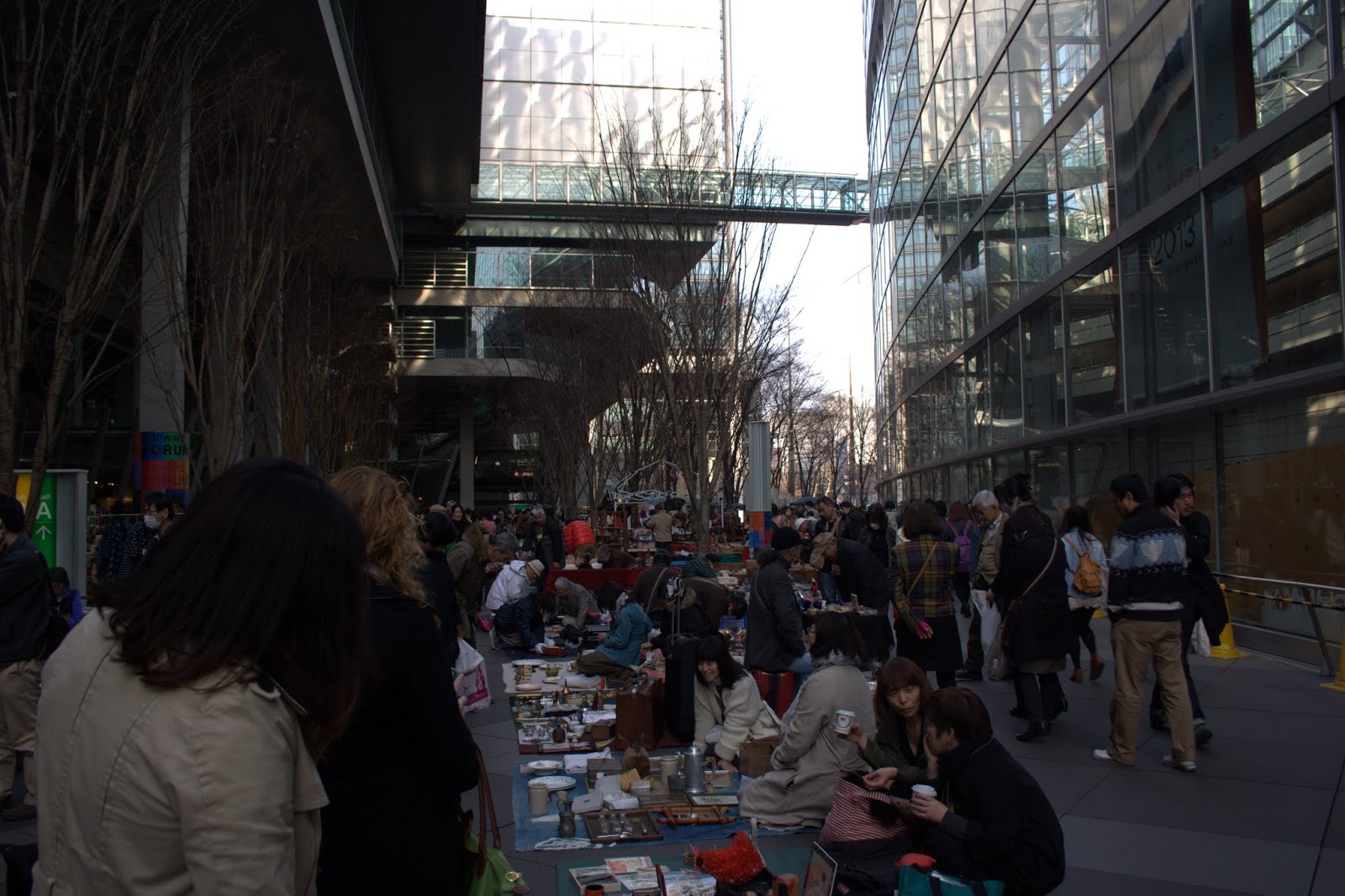 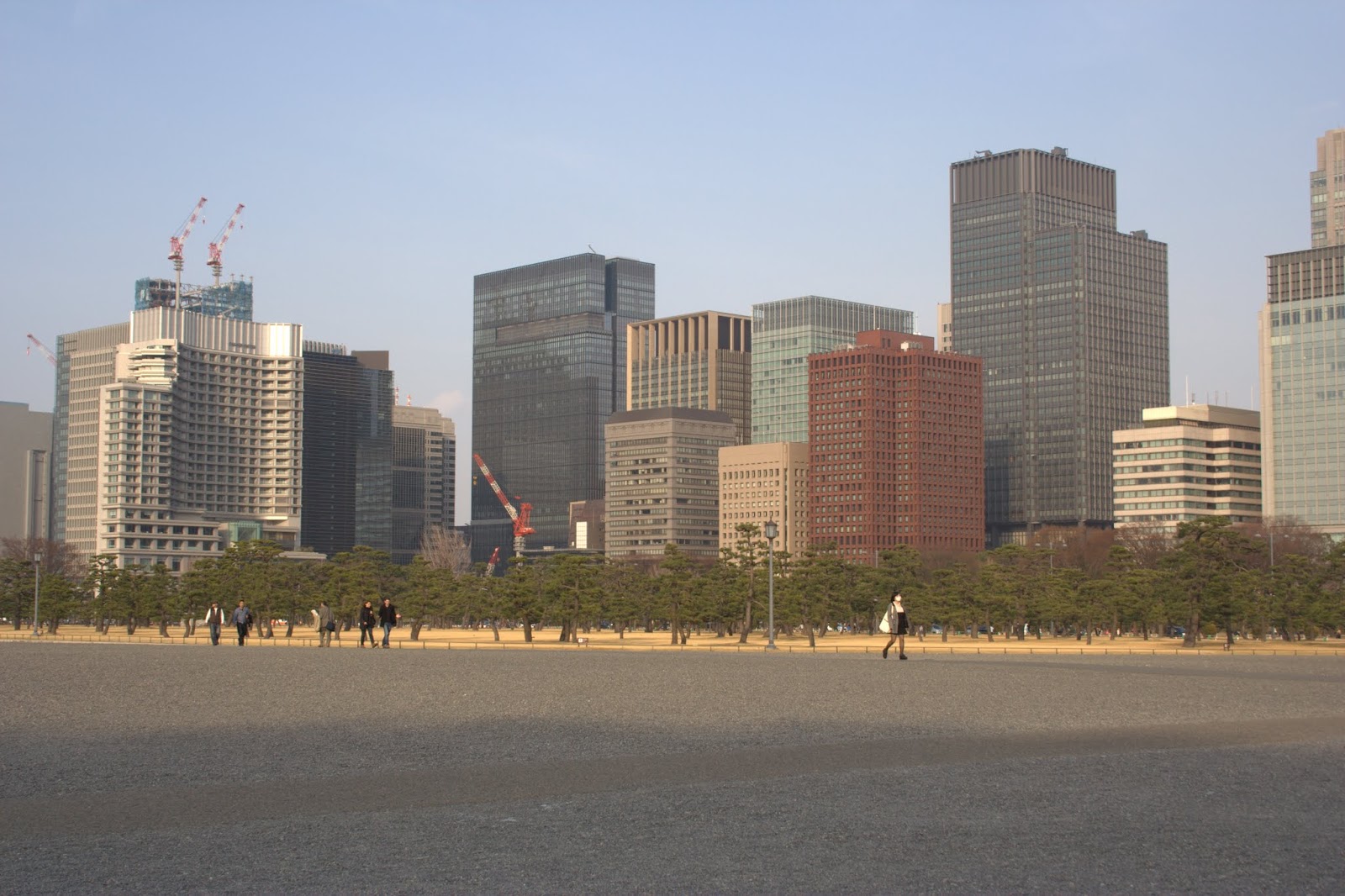 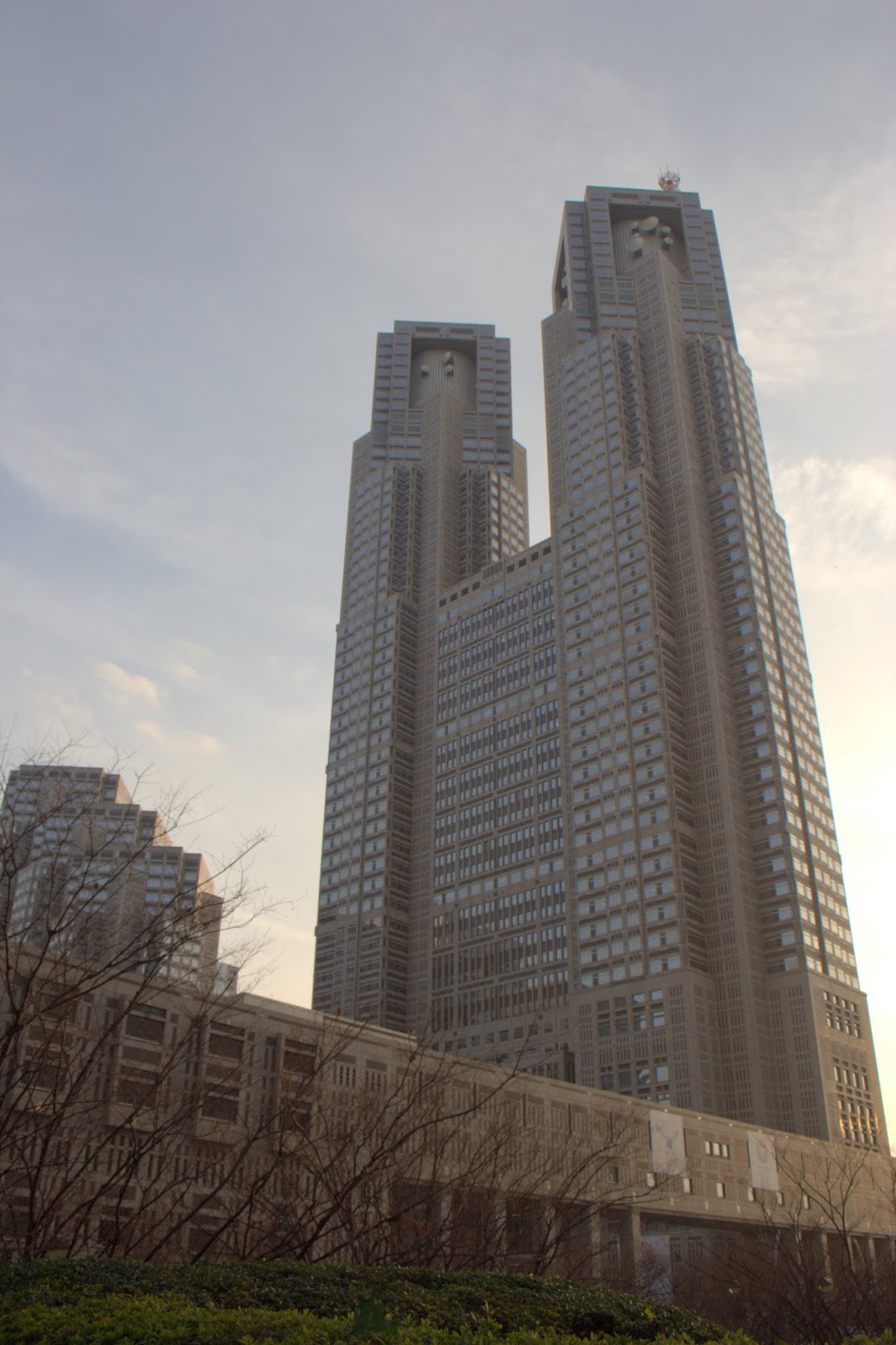 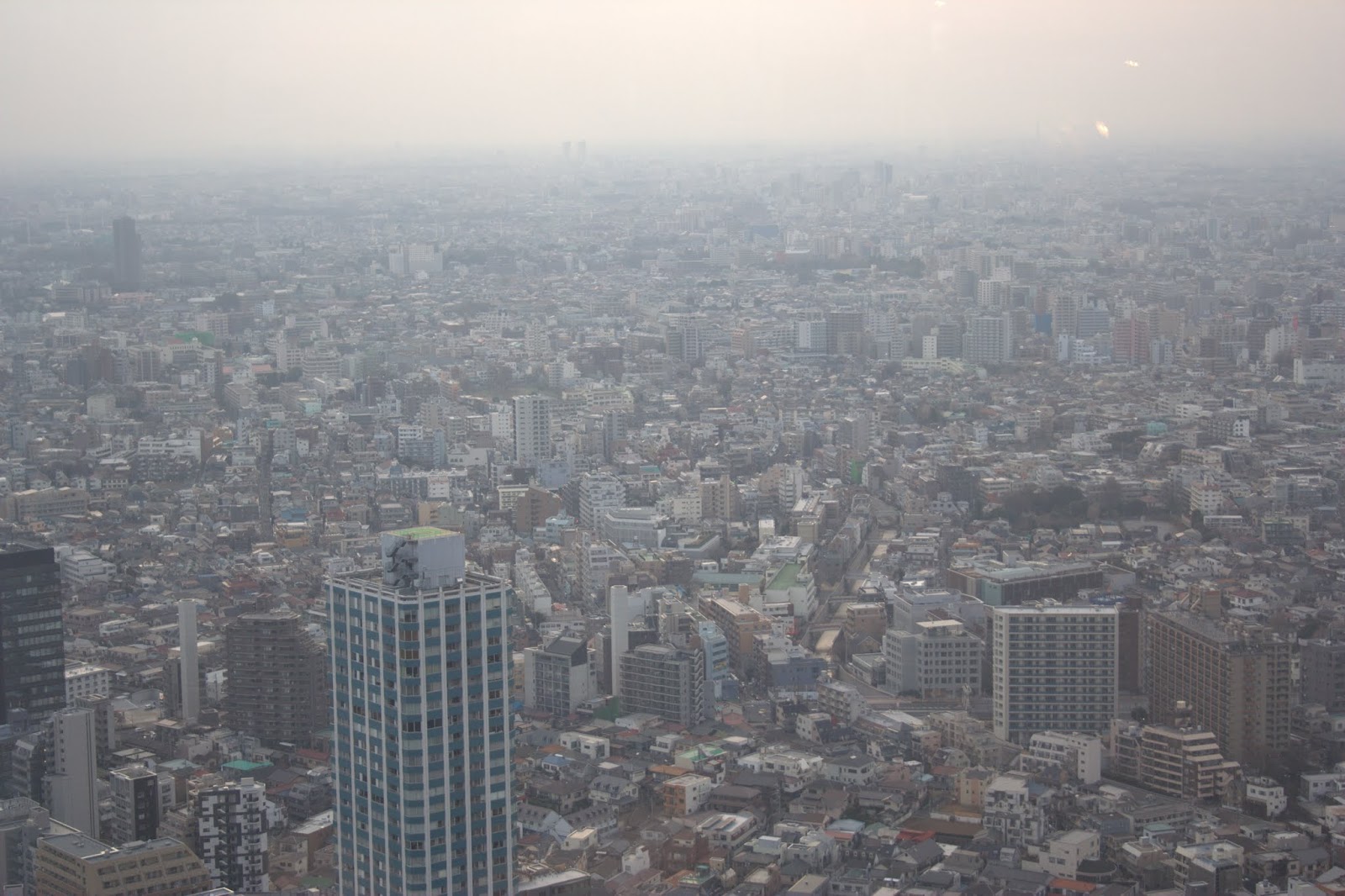 Back in Asakusa, I think we either had ramen or MOS Burger for dinner. The food we tried in Tokyo was mostly unmemorable (although I wish we had been able to visit a dessert buffet - those sound amazing). The MOS Burger fast-food restaurant was notable for having exciting electric-colored sodas, sweeter than anything I’ve ever tasted, in a variety of flavors; the burgers, however, were subpar, not to mention tiny. We did find a good Italian place in one far-away neighborhood, and one night we got so desperate for vegetables we went to a relatively expensive French restaurant in Asakusa. We didn’t get many veggies there, alas, but it was nice to have something that tasted Western for a change, and there was real bread! 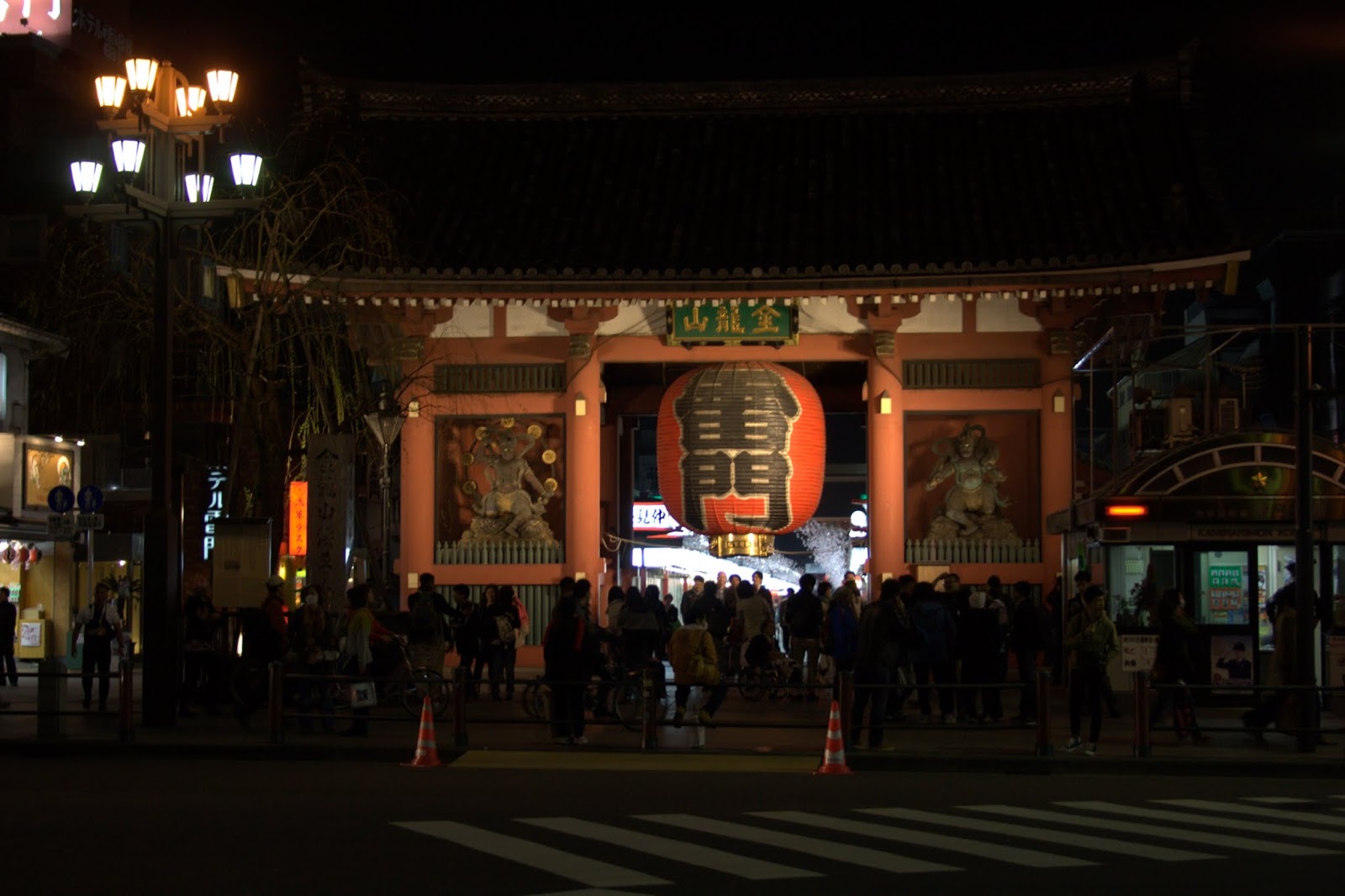 Studio time! On Day 1 of our studio trip, we met our groggy professors at 8am and proceeded to the Ginza site. It was windy, overcast, and deserted at the site, so after a few pictures we continued on our way to visit the other sites we had selected for our projects (each group had its own site in addition to the main Hulic-owned site). We checked out the neighborhood of Sumida on our way to see the Tokyo Skytree. Because of the wind, no one was allowed up to the top, so we wandered briefly around the base of the tower (a shopping mall) and then broke up for the day. I headed back but my peers went to check out the Asahi Beer Hall by Philippe Starck. It’s one of the stranger landmarks of Tokyo. 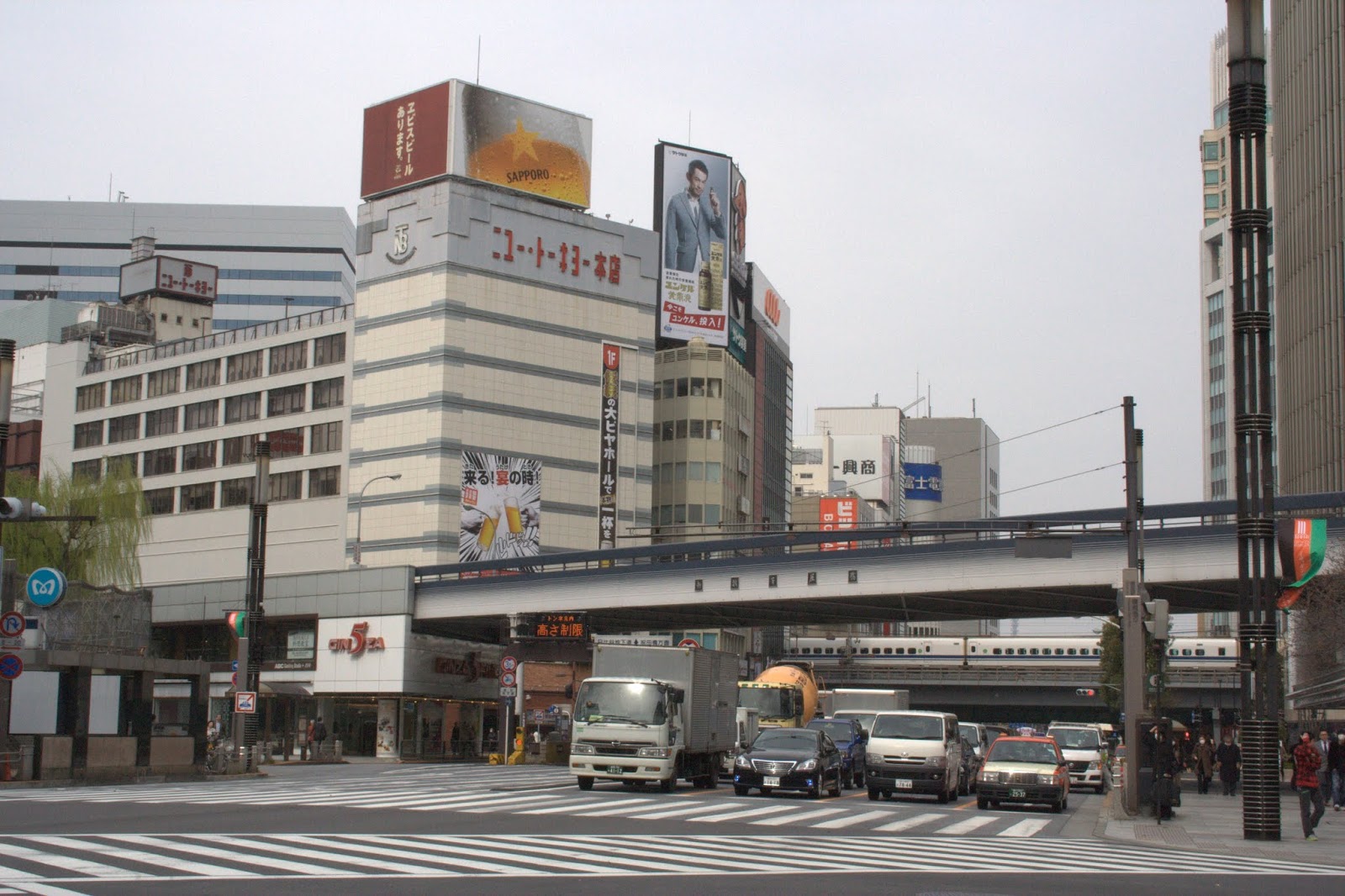 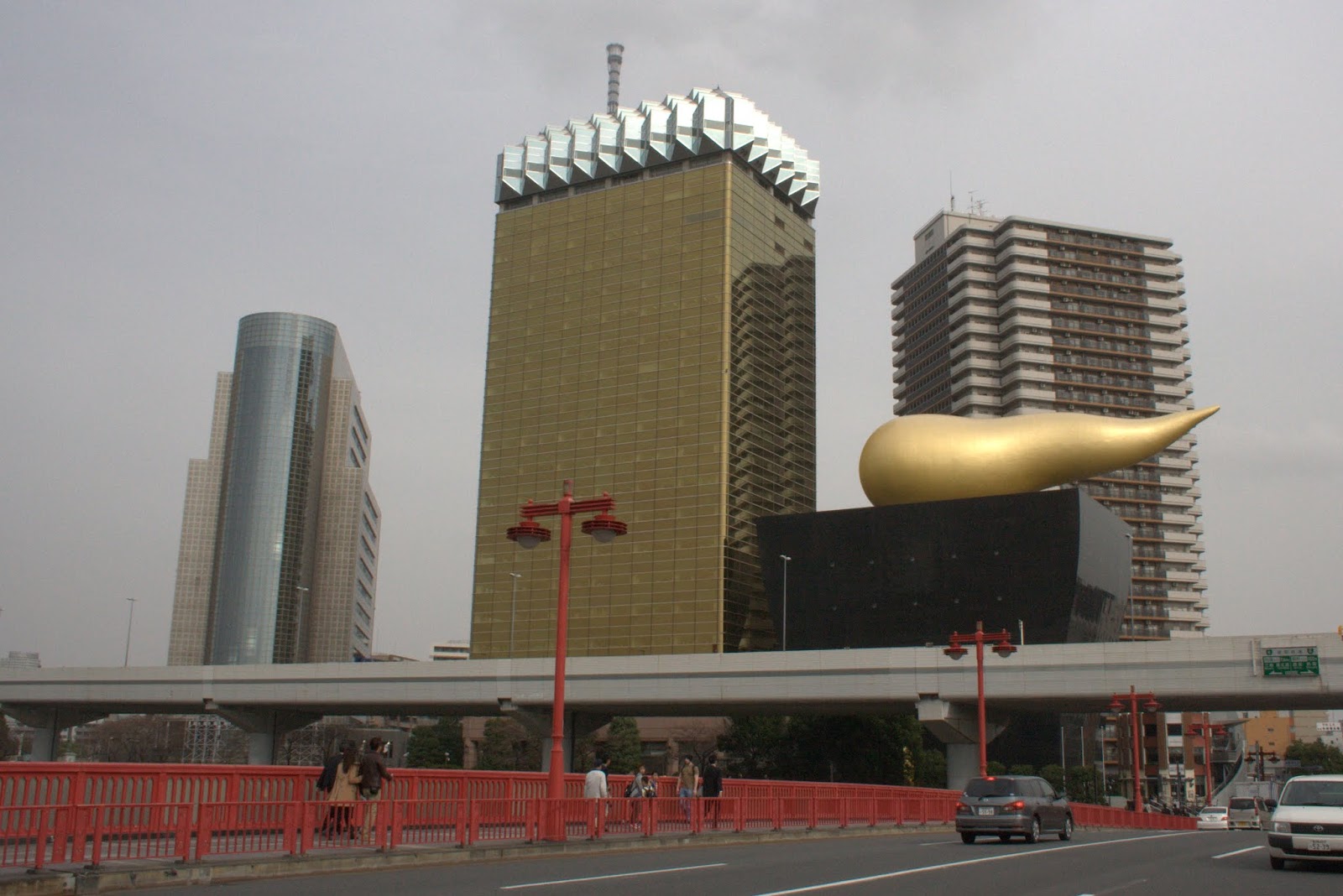 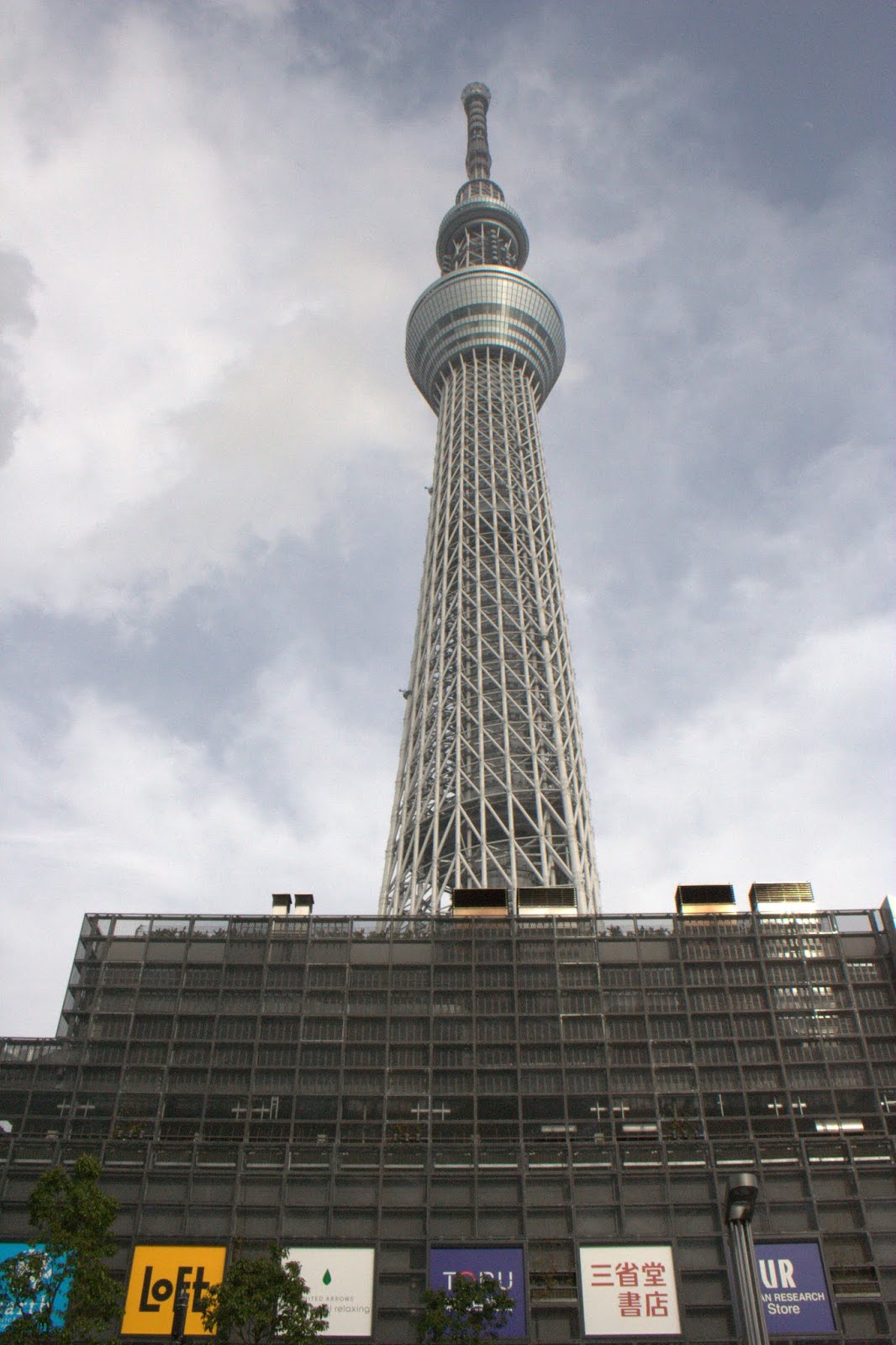 On Tuesday we had our first round of presentations for Hulic, this time held at Studio-X Tokyo, the GSAPP site in the city, at the Shibaura House (by Kazuyo Sejima) in the Shibaura district. This is a multi-purpose building used as a nursery/educational center, office, and Studio-X location. In fact, only a couple of Hulic representatives came, so this ended up more like a rehearsal (or repetition) of the midterm review from the week before than a new presentation.

Afterward we continued on our site visits, taking the subway over to Toyosu Island / Shin-toyosu to visit my site. This is one of the most under-developed areas of the city, and it was pretty amazing to see wide open swathes of vacant land right in the heart of the city, with spectacular views of the waterfront. There is already a monorail line in place, but it doesn’t serve much purpose right now. The city is building a new wholesale market there, however, so I can’t imagine that the area will remain vacant for long. 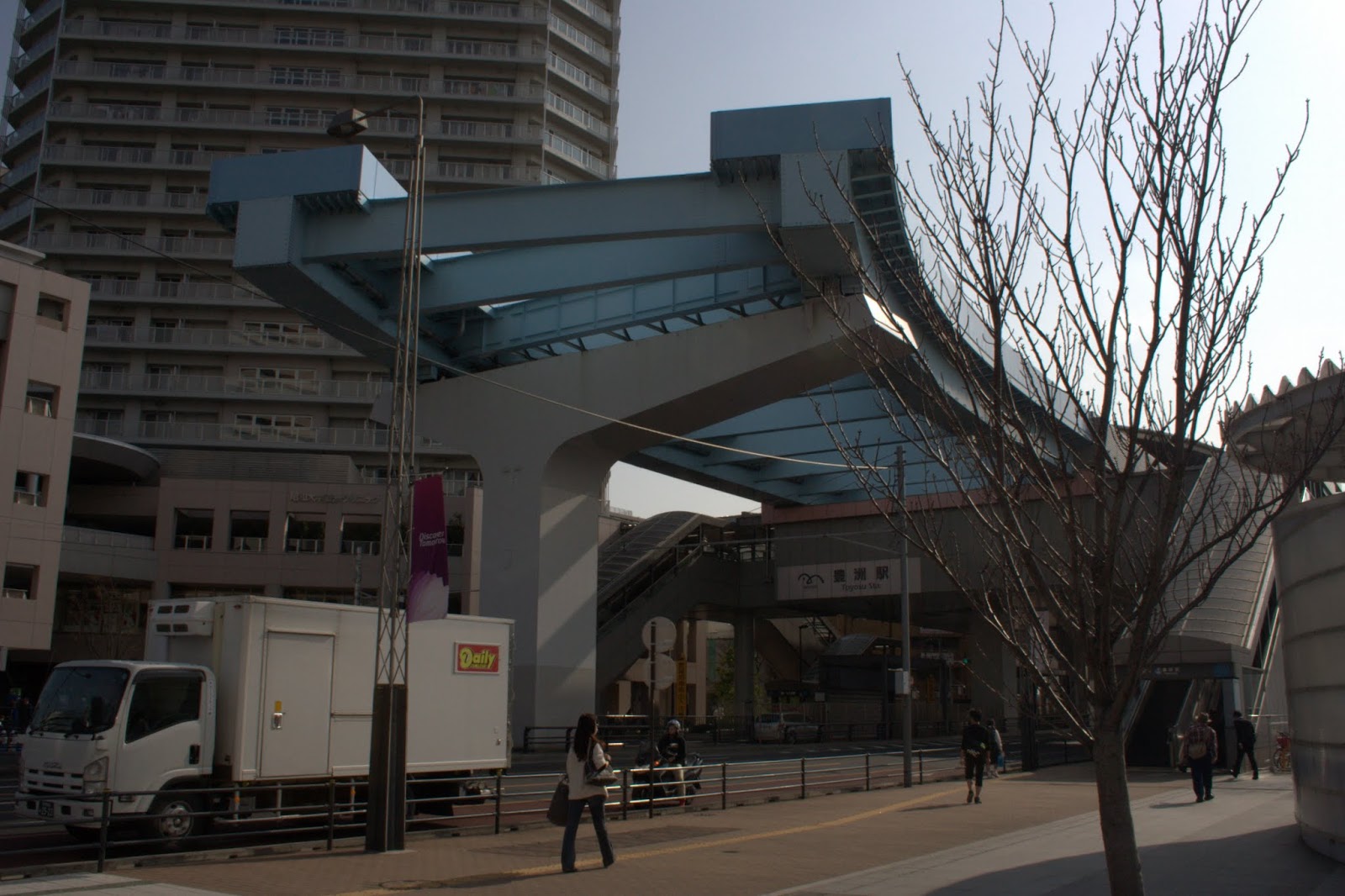 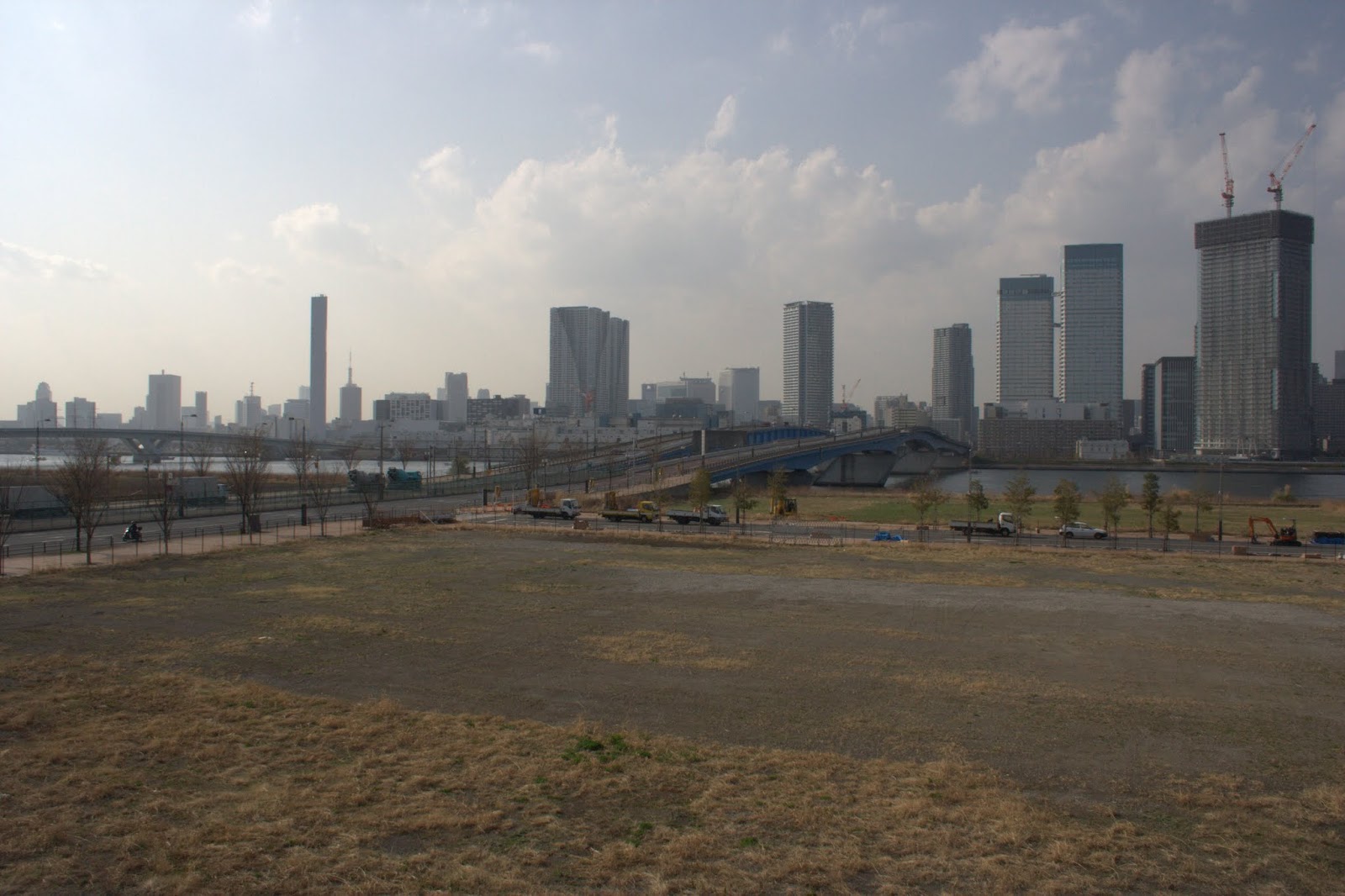 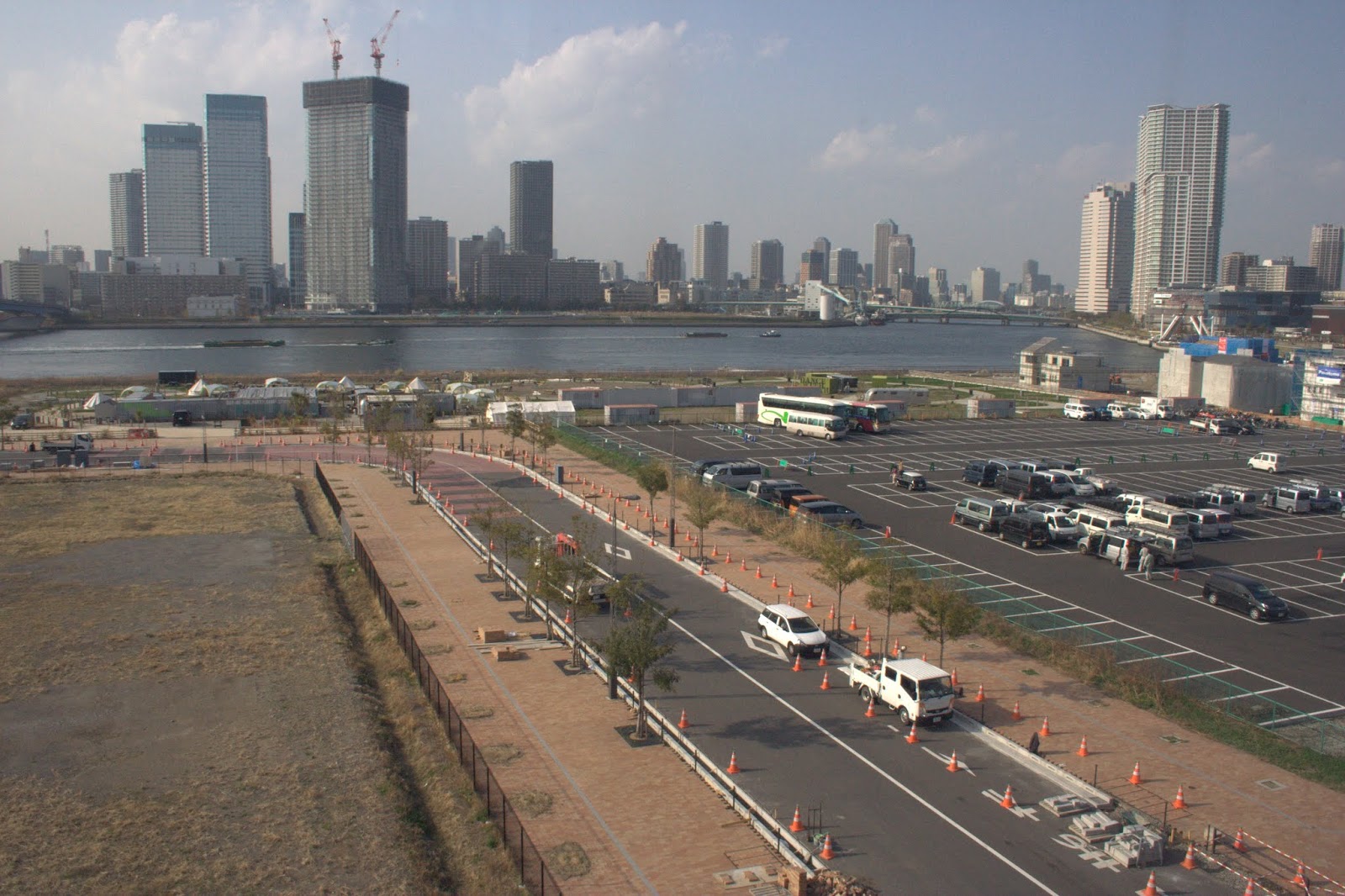 Our final stop of the day was at the offices of SANAA, a firm run by Pritzker-prize winning duo Sejima and Nishizawa. Their office was way the heck out in the middle of nowhere, past blocks of apartment buildings with a Soviet air. A GSAPP grad who works there gave us the tour, which was quite challenging because of the amount of stuff (mostly models) cluttering up the warehouse-sized office. I had the barely-controllable urge to find a broom or vacuum and start cleaning. We didn’t meet with either of the designers themselves, and all the other staff seemed too busy to talk to us, but we heard some great (in a terrible way) stories from our GSAPP guide. I don’t want to repeat them here, but if you want to hear some truly horrifying stories of what it’s like to work for an architecture firm in Japan, let me know!