And so, three years in New York have gone by like a flash, and Justin & I are beginning our next adventure - San Francisco / Silicon Valley. But before we dive in to our new city, here’s a wrap-up of some final New York experiences.

On a still-cold but sunny day this spring, three of us made the trip to Roosevelt Island to see the recently-opened Four Freedoms Park, designed by Louis Kahn and dedicated as a memorial to Franklin Delano Roosevelt. The park gets its name from FDR’s famous State of the Union address declaring freedom from fear, freedom from want, freedom of speech & expression, and freedom of worship. Roosevelt Island, the park’s location, is itself named after FDR. This memorial and park has an unusual history: Kahn designed the park before he died suddenly in 1974, but the project was suspended after that and only begun again in 2005. The final design was kept as close as possible to Kahn’s original, under the direction of Mitchell | Giurgola Architects.

We arrived at the island from the subway and walked past a cherry blossom festival that happened to be going on; the festival used part of the memorial plaza, so I can already tell that this site will be well-used. Roosevelt Island has also become known recently as the future site of Cornell’s new tech campus, part of Mayor Bloomberg’s campaign to bring more tech jobs to New York. It remains to be seen how the campus will fit in with the rest of the island. 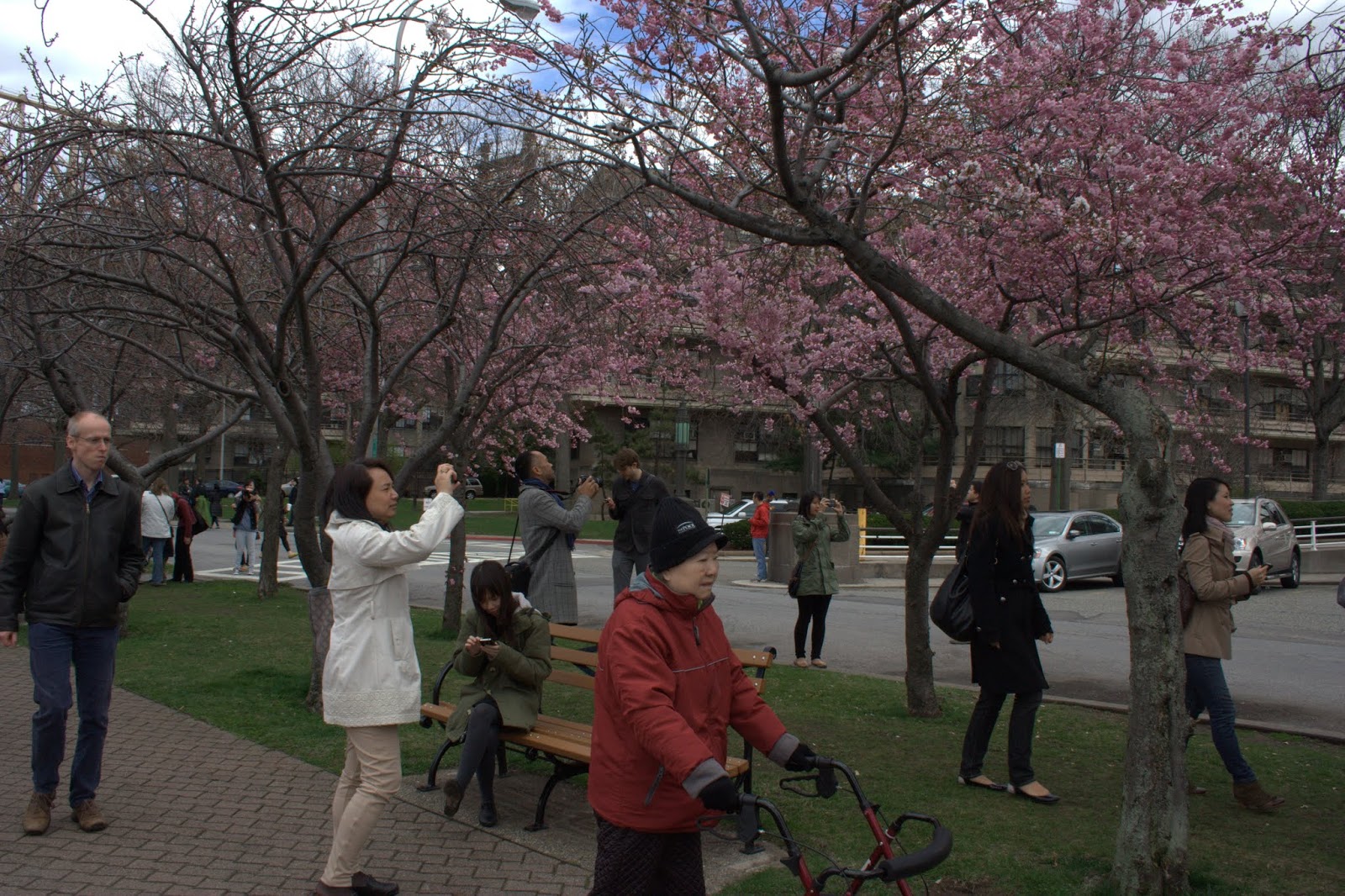 As we approached the park, we kept to the right, skirting around the audience sitting on the main steps, which was watching some cultural performances as part of the festival. We made our way down the eastern allée of trees and were blinded by the white granite at the “prow” of the park. The view of Manhattan, and of the United Nations buildings in particular, was fantastic. Only after admiring the view from the end and then turning around did I really notice the dramatic expanse of lawn that forms the majority of the park. I was too distracted by the city views to notice it on the approach from behind the trees. On the lawn, kids were cart-wheeling and running around, enjoying the spring weather, in contrast to the stark solemnity of the white granite “prow” with its floating bust of FDR. 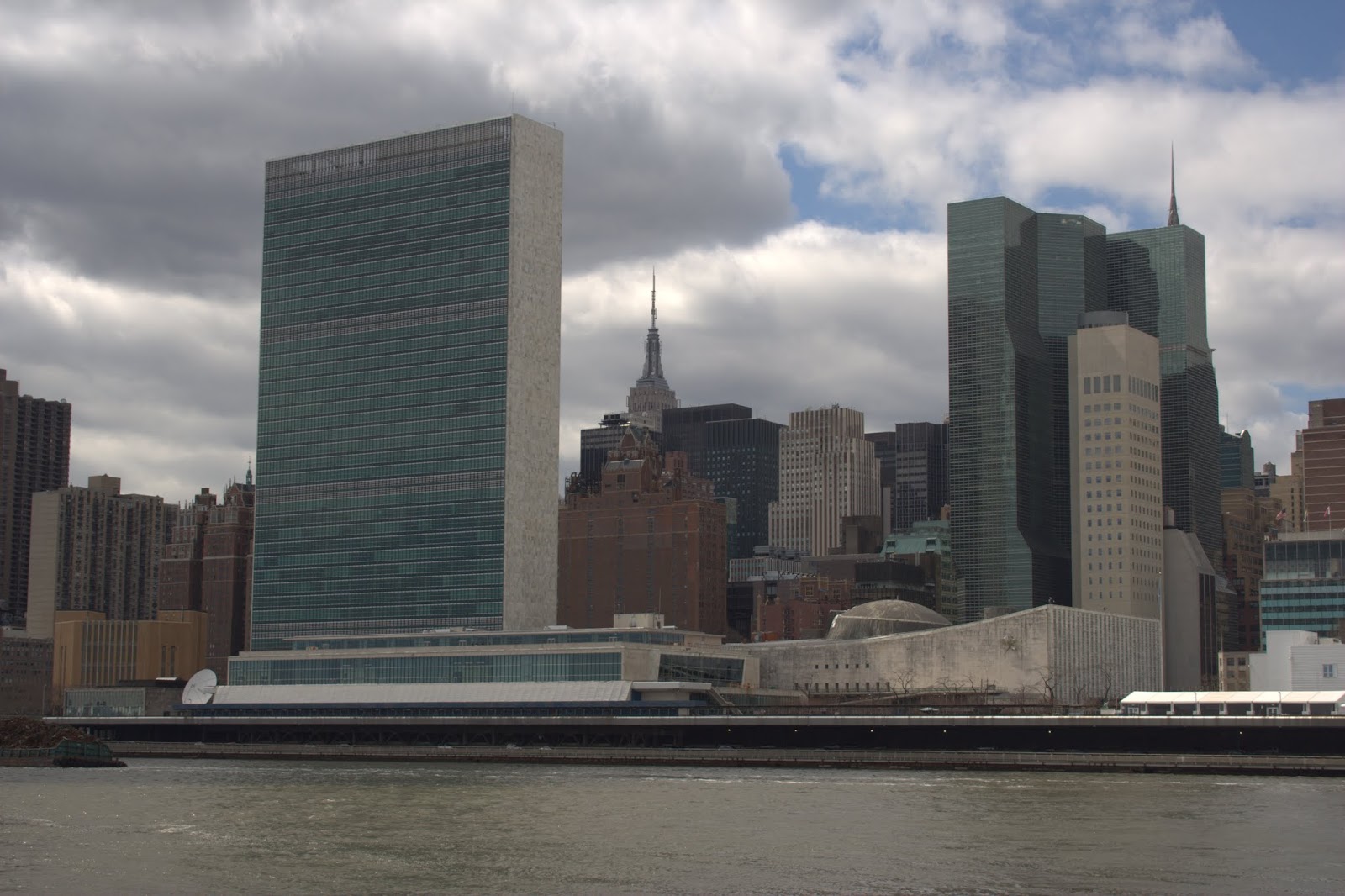 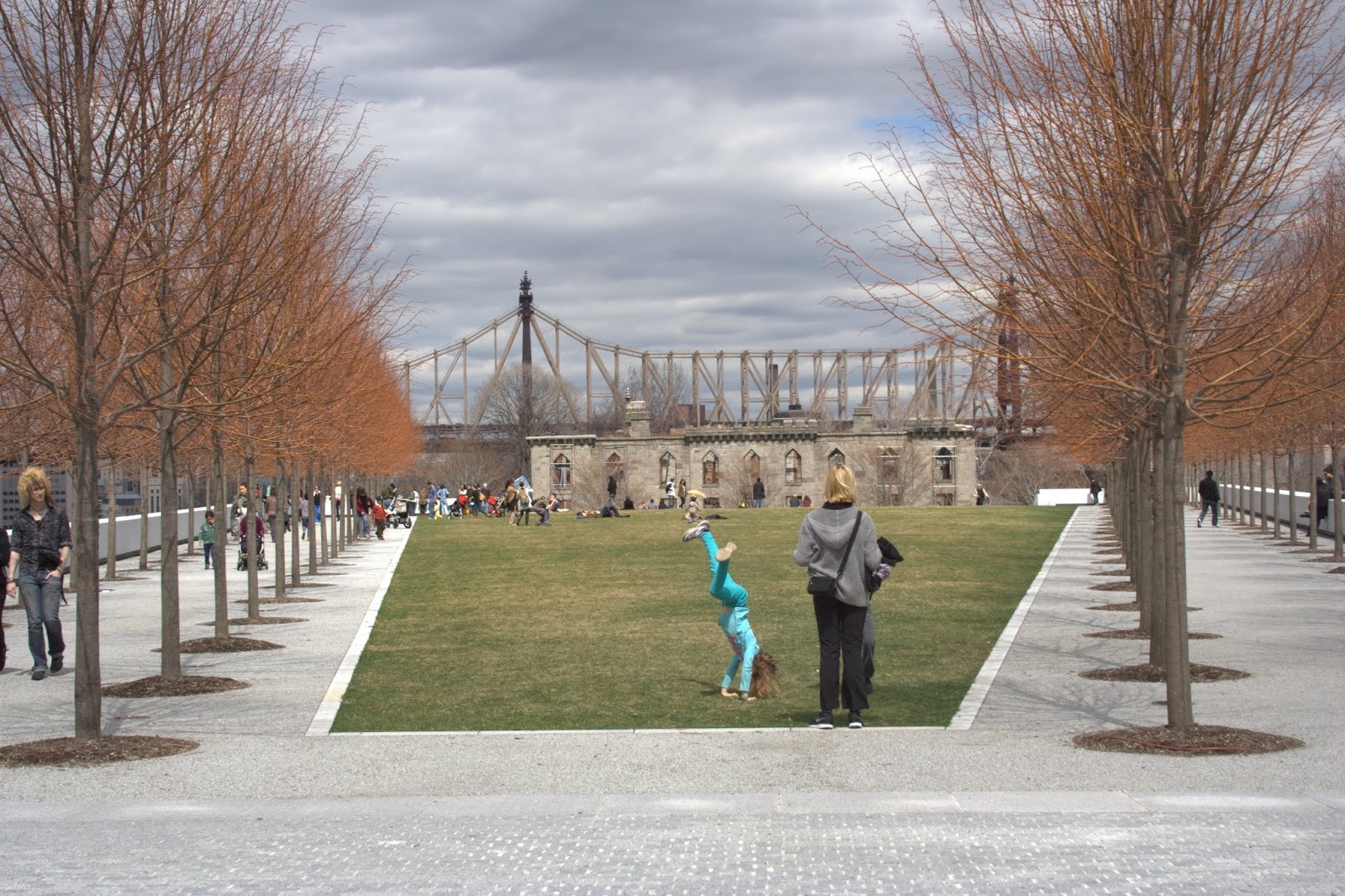 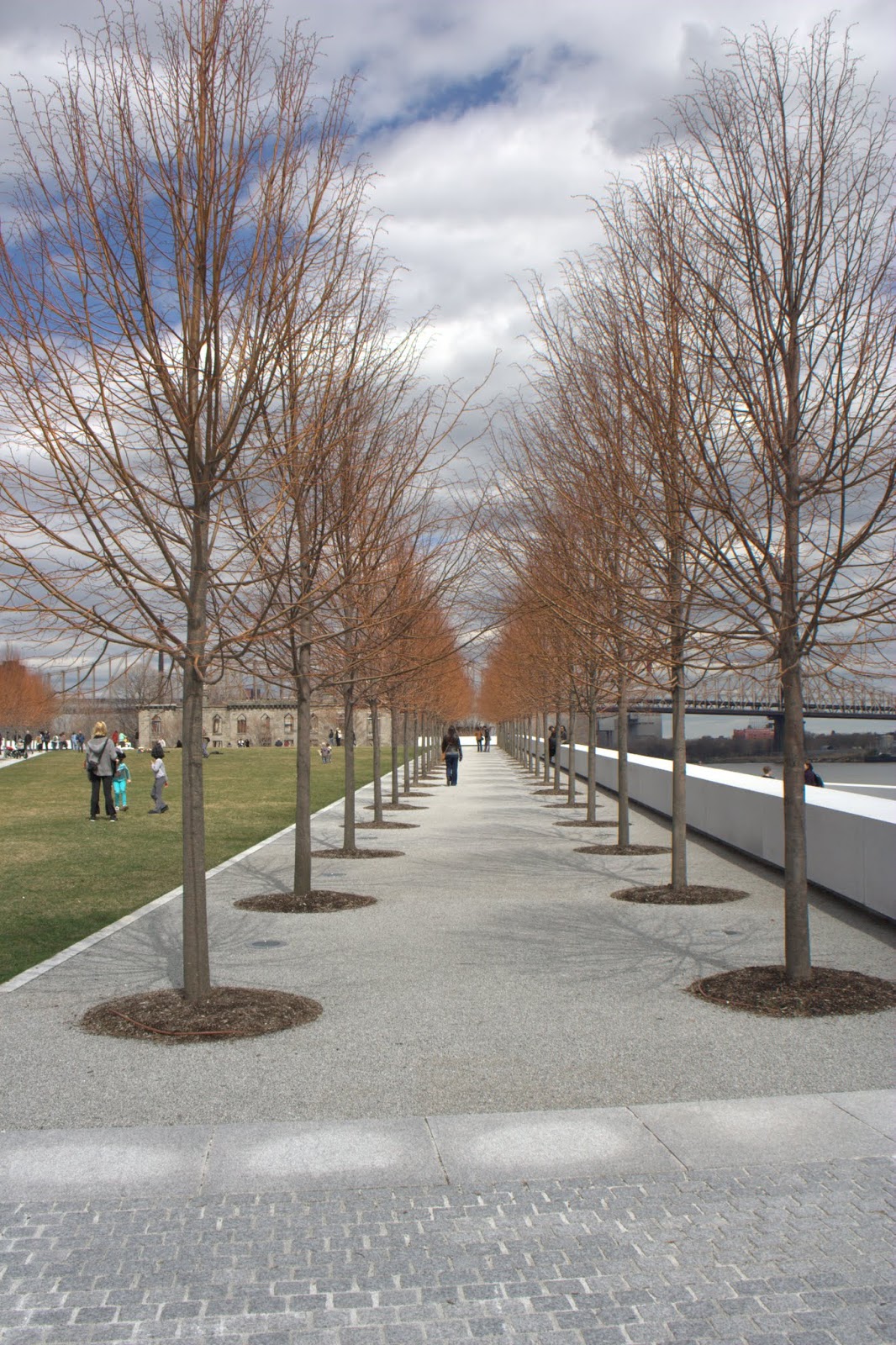 After walking back to the entry steps we were able to take in the entire view of the park. I noticed the walkways along the sides of the park, down by the water, but we didn’t explore them further. 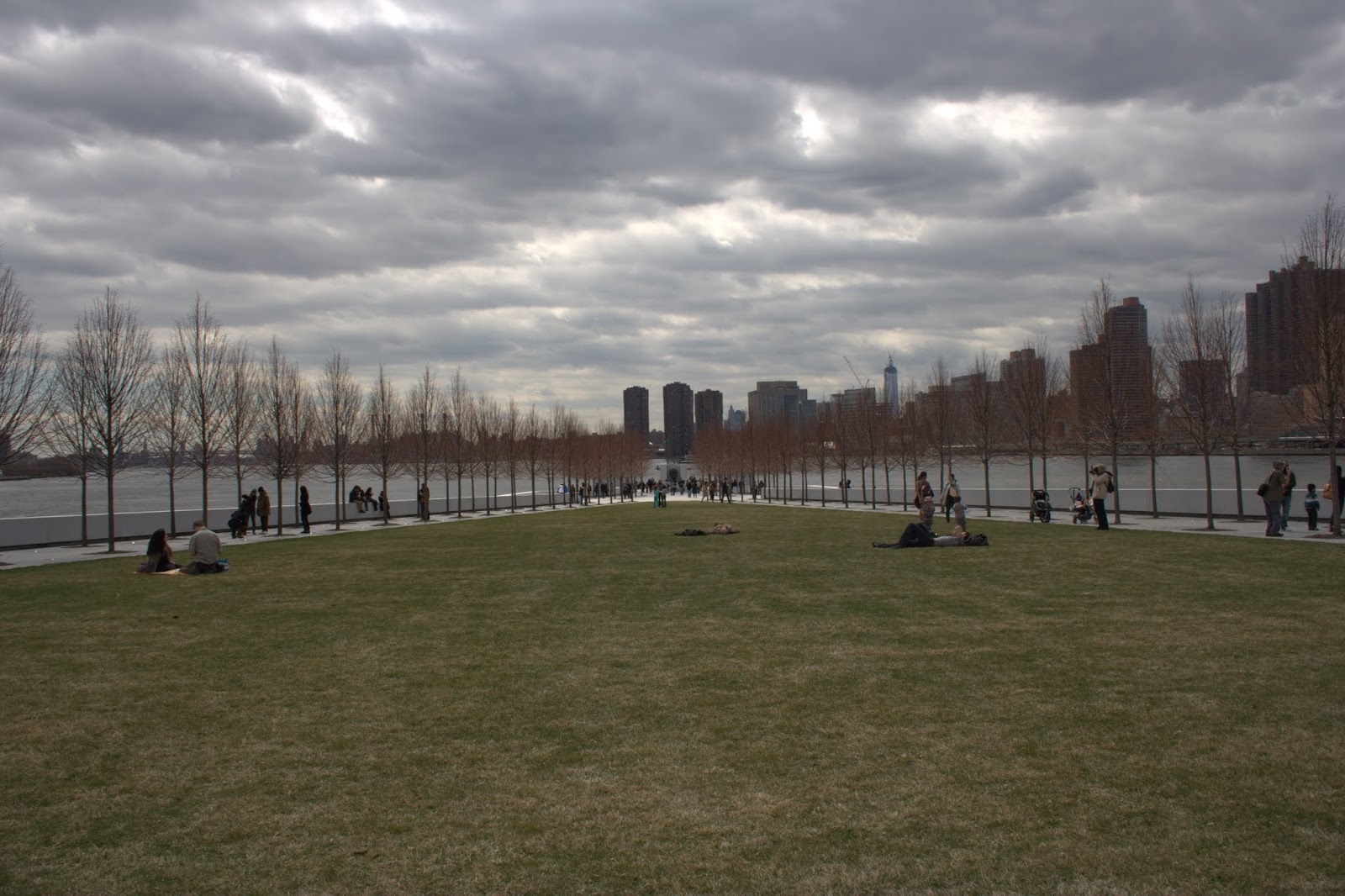 Kahn’s design brings you up from the plane of the riverfront walkway to the elevated lawn, via the grand entrance steps, and then slowly back down to the level of the water at the far end. The scale of it seems right, and certainly it’s one of the best places in the city to see the rest of the city. I had to look hard to see the details like the mortar-less placement of the blocks, with a thin space between them, and the blinding whiteness of the stone made our visit uncomfortable. But I imagine that time and wear will dull the stone, and a cloudy day will change the experience entirely. In all, I would highly recommend a visit, if only to get a sense of Louis Kahn’s later work without having to travel outside the city. For a much more elegant review of the park, read architectural critic Michael Kimmelman’s review. 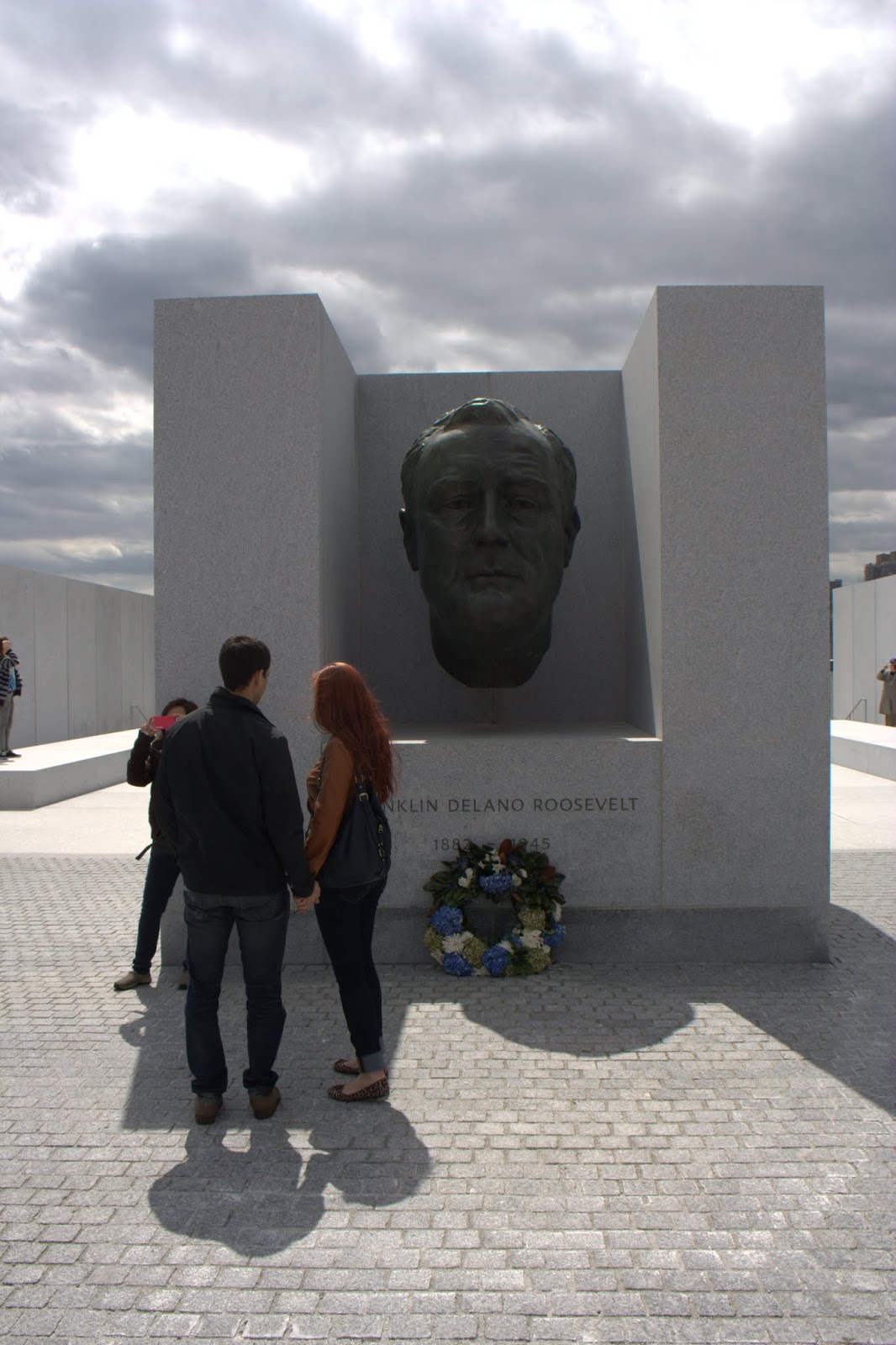 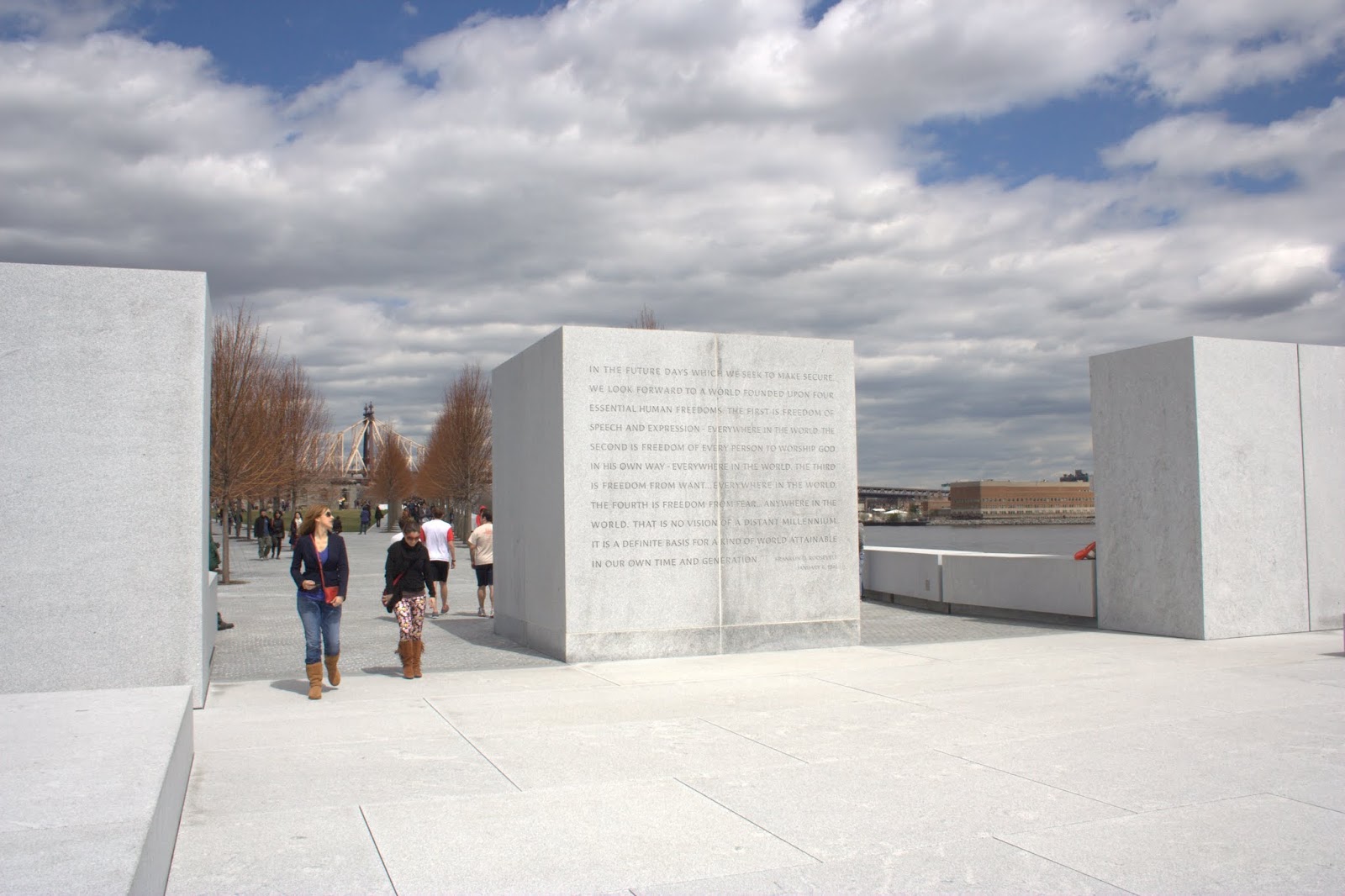 We took the aerial tram back to Manhattan (the island has limited public transit access), had lunch, and decided that any future visits need to happen when it’s warmer! 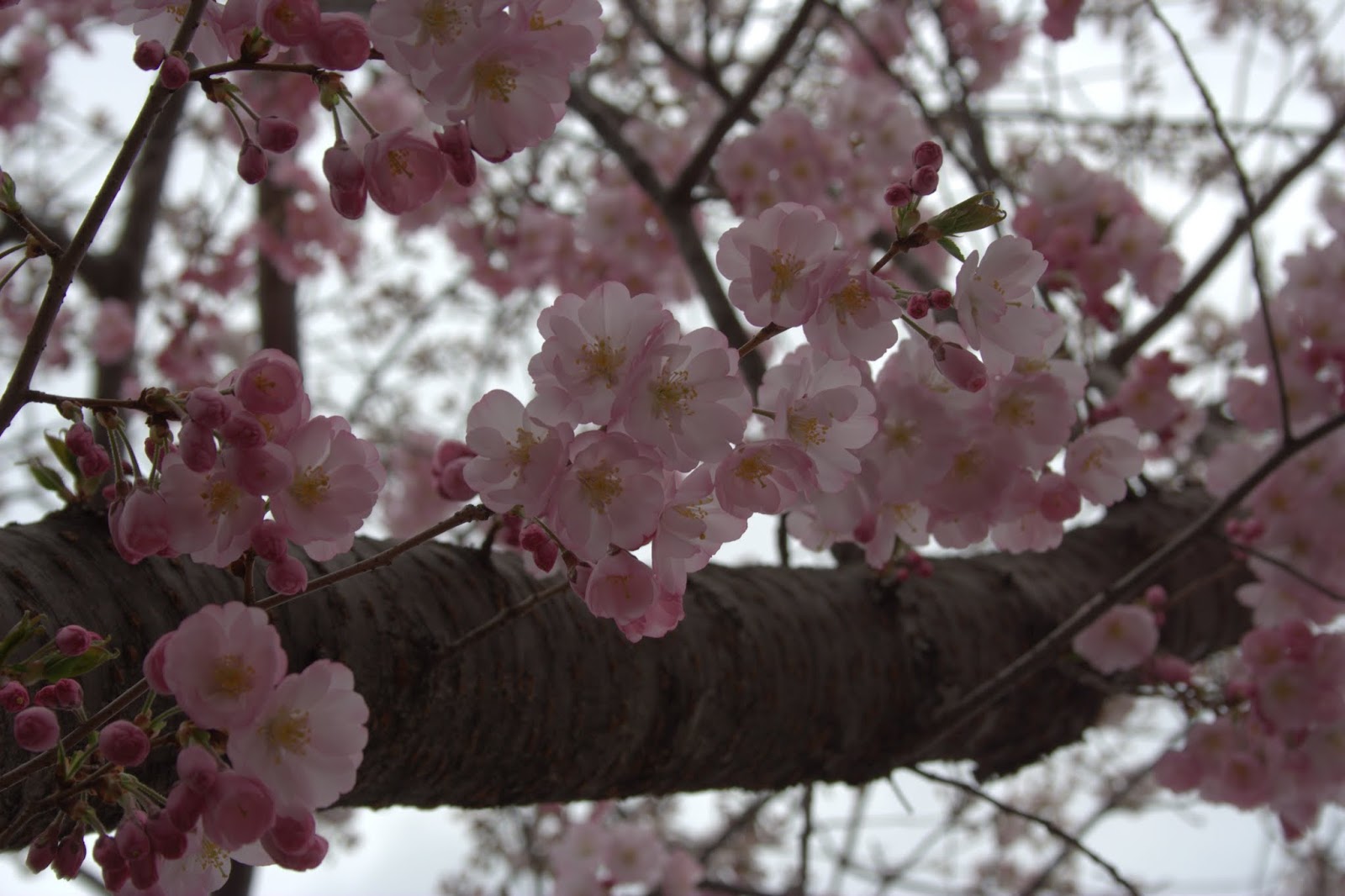 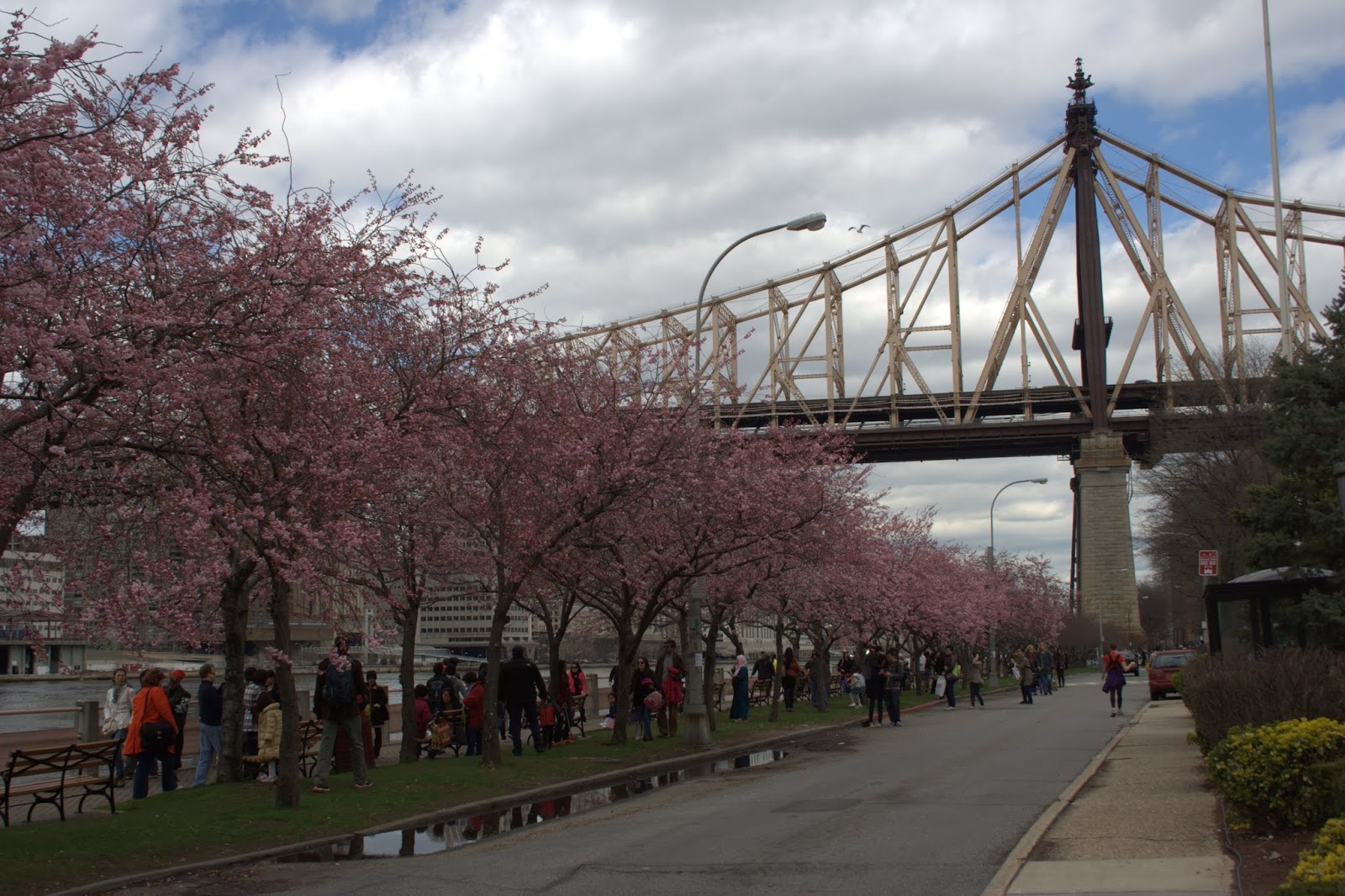 Another interesting experience we had was taking the Metro North - Hudson Line train up to visit a friend in Tarrytown. We took the subway first to Marble Hill, where we caught the train. We had a hard time finding the station, and once we did, I was quite amazed: like the Cloisters and some parts of Central Park, this part of Manhattan looked nothing like the quintessentially urban place I have come to know as New York. The rest of the train ride was equally interesting, although I don’t have any photos (turns out, it’s hard to take photos with your phone while riding a bumpy train). The Hudson line takes you along the Hudson River for most of its length, and the river itself has somehow been protected from development along its banks, giving you the impression that you’re riding through forest, or at the very least, not through a city! It probably helps that the “bank” is actually a rocky cliff. 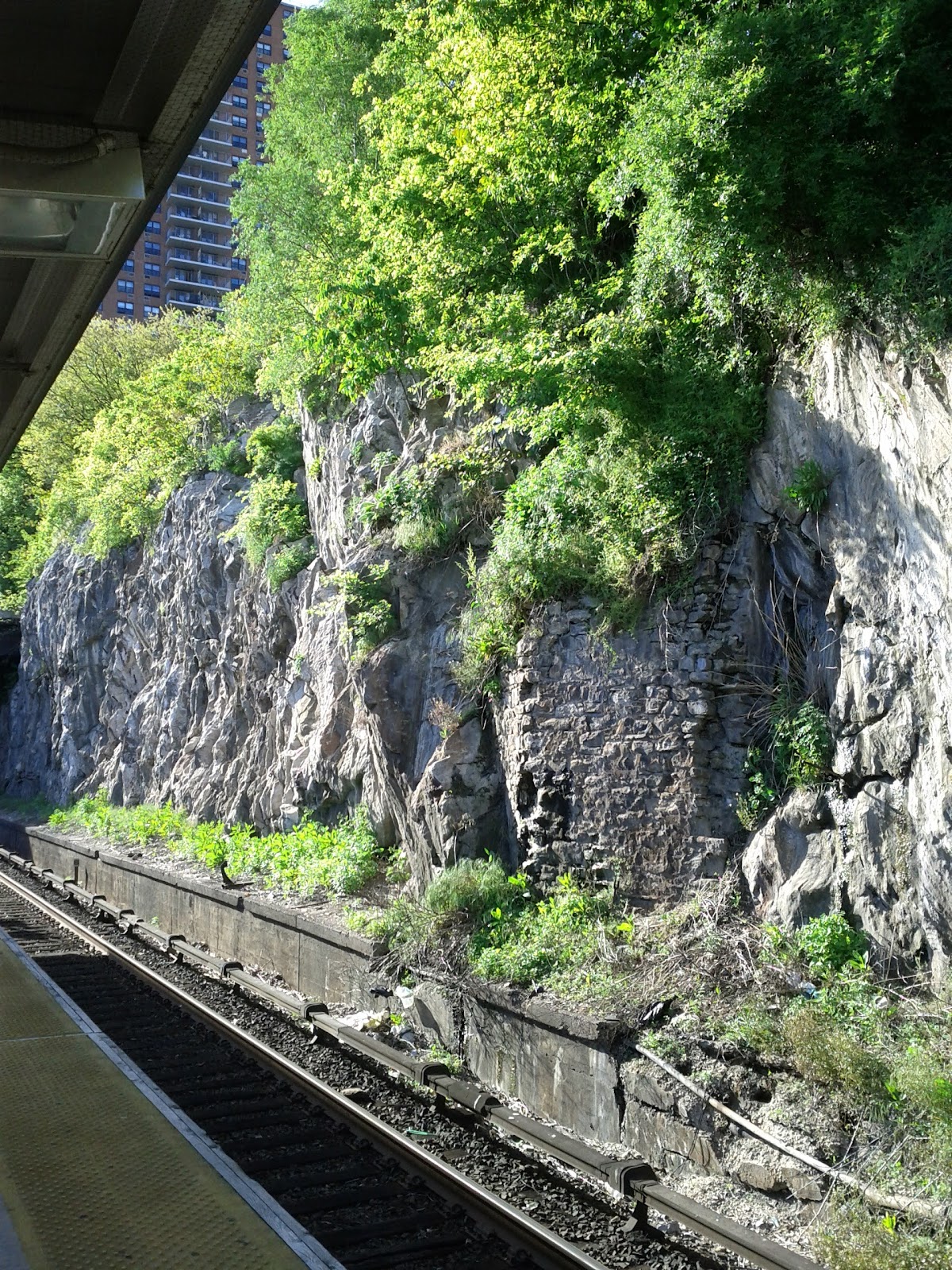 This waterfront train ride, and visits to Central Park and Fort Tryon Park (home of the Cloisters), emphasized for me the possibility of having your nature and your city, too. With smart regulation and development, it’s possible to have dense, forested parks, natural waterways, and urban living within easy access of one another. (This argument is taken up in A Country of Cities, a book by my studio critic Vishaan Chakrabarti, which I’ll be reviewing shortly.) As I learned during a lecture in Denmark, it’s better for wildlife to have connected green corridors than isolated large parks, but it’s better to have any kind of parks, both for people and wildlife, than no parks at all. I hope New York continues in its pursuit of new parks and open spaces as part of the city’s planning policy, so places like these are no longer unexpected gifts but an expected and valued part of city life. 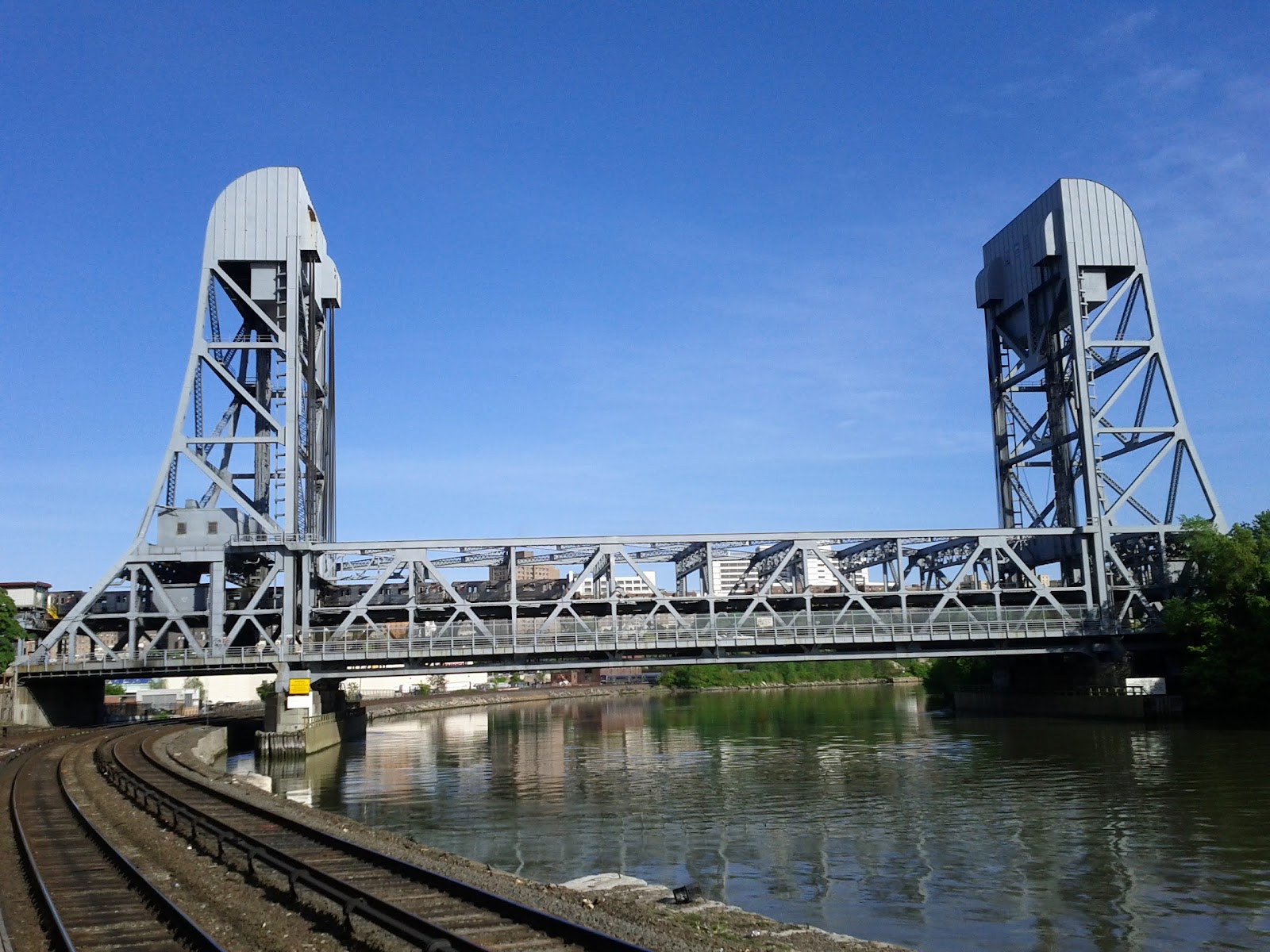 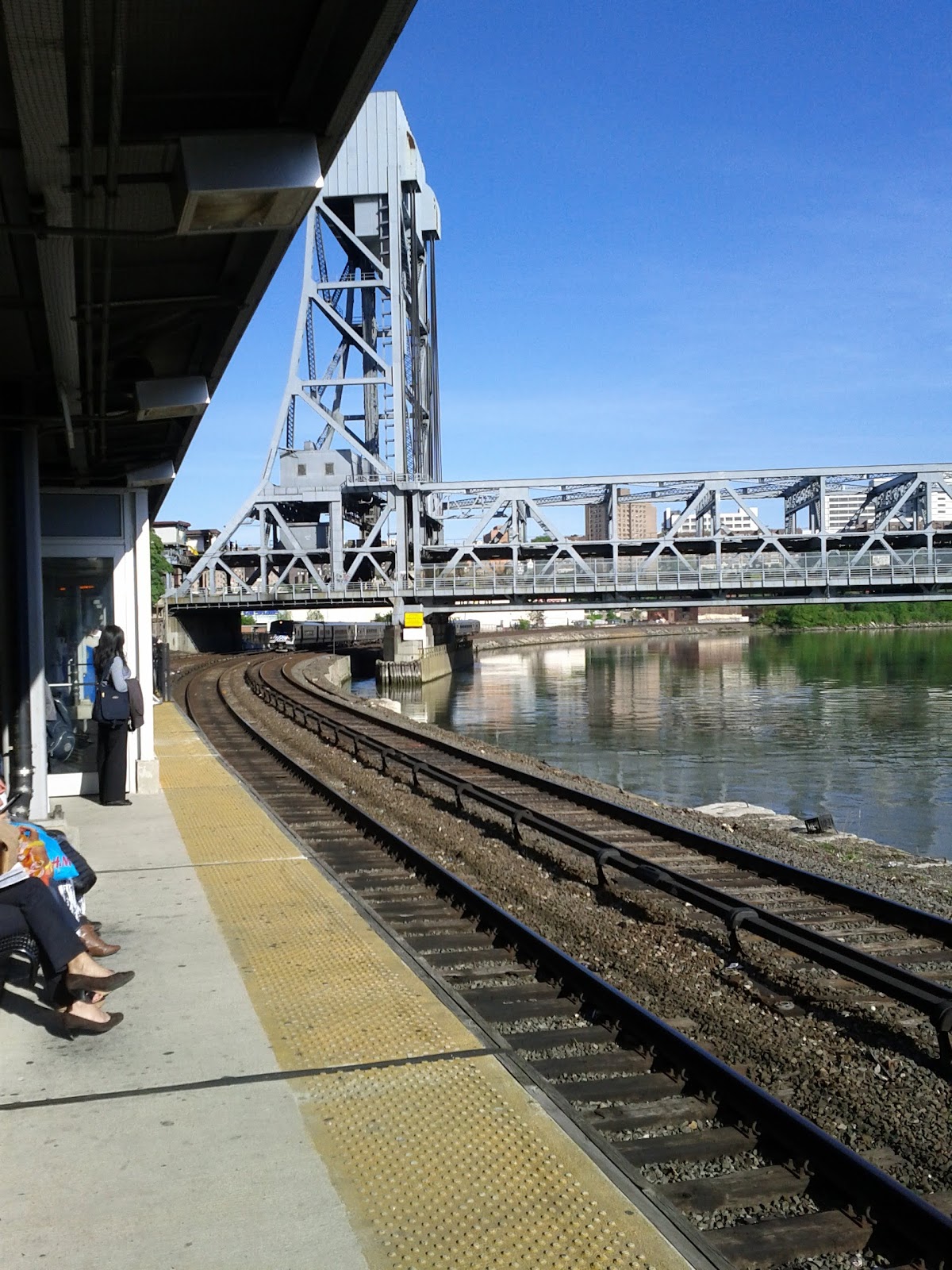 On a separate, and more humorous, note: Marble Hill, while geographically located in the Bronx, is politically part of Manhattan. This is because the hill used to be part of Manhattan, and was only separated from the island - and attached to the mainland - in 1914, as part of a river diversion and subsequent land reclamation project. The residents have been fighting to stay part of Manhattan ever since. Isn’t history fun?