John, we won’t forget you.

I will remember not just our housing studio project together, or that first semester where we - you, me, Jenny, and the other non-architecture-students in Yoshiko Sato’s studio - struggled to get a grasp on that thing that is architecture school; but I’ll also remember the giant bag of chocolate-covered acai gummies you kept in your drawer, your endless series of documentaries to watch on your sticker-festooned laptop, your street art obsession, your fearlessness, and your crazy imagination.

Choosing a partner for the housing studio at Columbia is in many respects like getting married, requiring similar levels of commitment and determination to stick it out. I should know, because I did both around the same time. Our housing studio was fall of 2011, right after my wedding. The housing studio semester can be amazing or terrible depending on one’s choice of partner, and while John and I disagreed often and argued at length, I think our partnership was in the end a good one. With his engineering background far behind him, John was always the more visionary of the two of us, pushing us to do crazy things with steel and concepts and programs. We modeled our project in Revit while he did watercolors by hand and built our physical models to complement the drawings. During our site visit to the Taino Towers, he convinced me to go up to the roof, where we got the photo that really made our project, the one I still use in the final image to represent that semester. 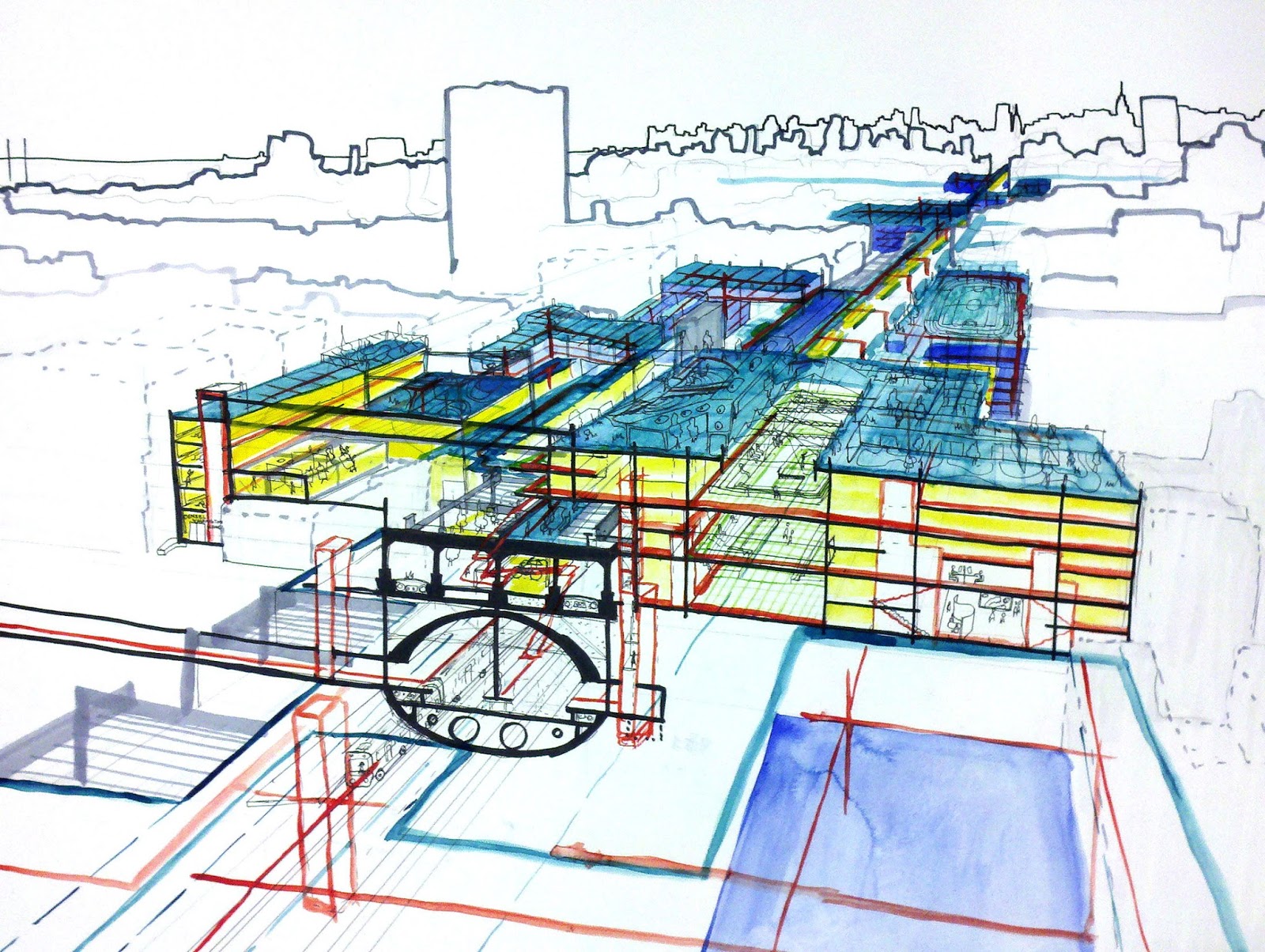 John was a night person, to put it mildly, and I would often find him asleep at his desk in the morning, curled up in his hoodie, with pieces of models strewn around him and - hopefully - a freshly-spray-painted final piece for that day’s presentation. Although he had his dark moments, John always put his best forward at reviews, and kept us all entertained with his stories and sketches. I still remember the review in first semester studio where he sketched us each in turn. The one of me showed me with a pie in one hand and a finished model in the other, labeled “the week before final review.” He was gently mocking my mania for getting things finished early, in contrast to his own more relaxed approach. I don’t think I ever had time to make pie before a final review after that semester, unfortunately! 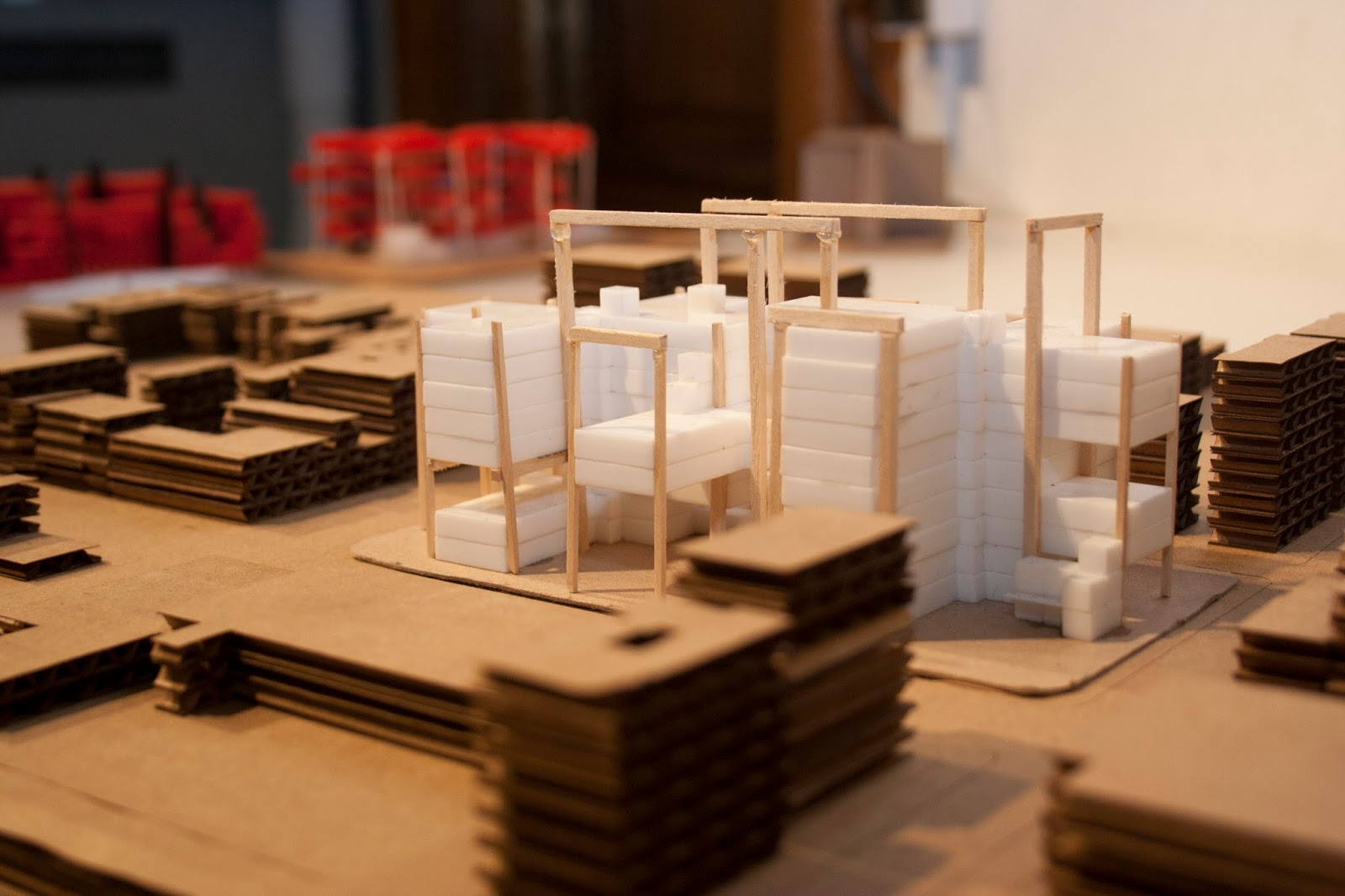 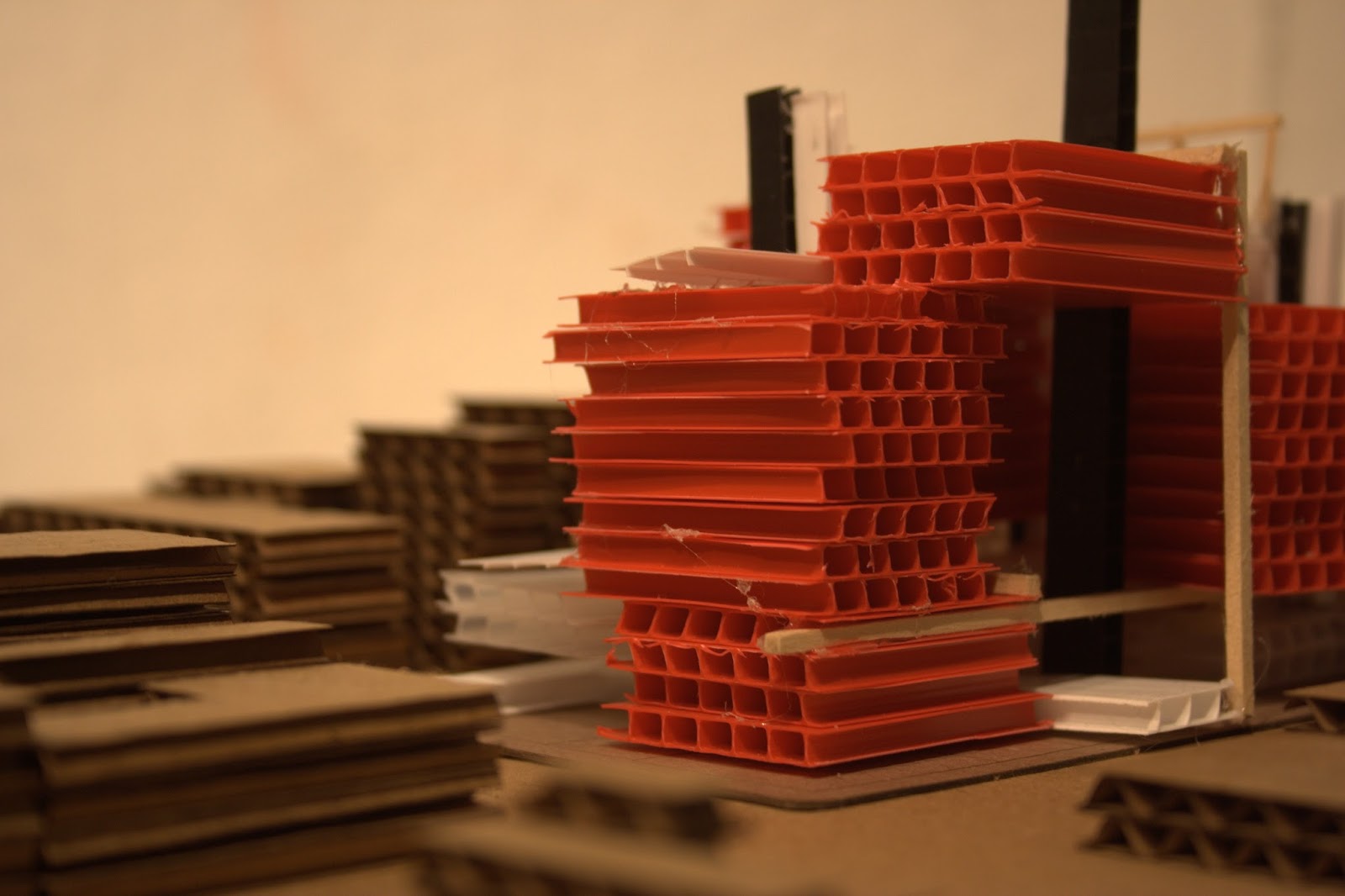 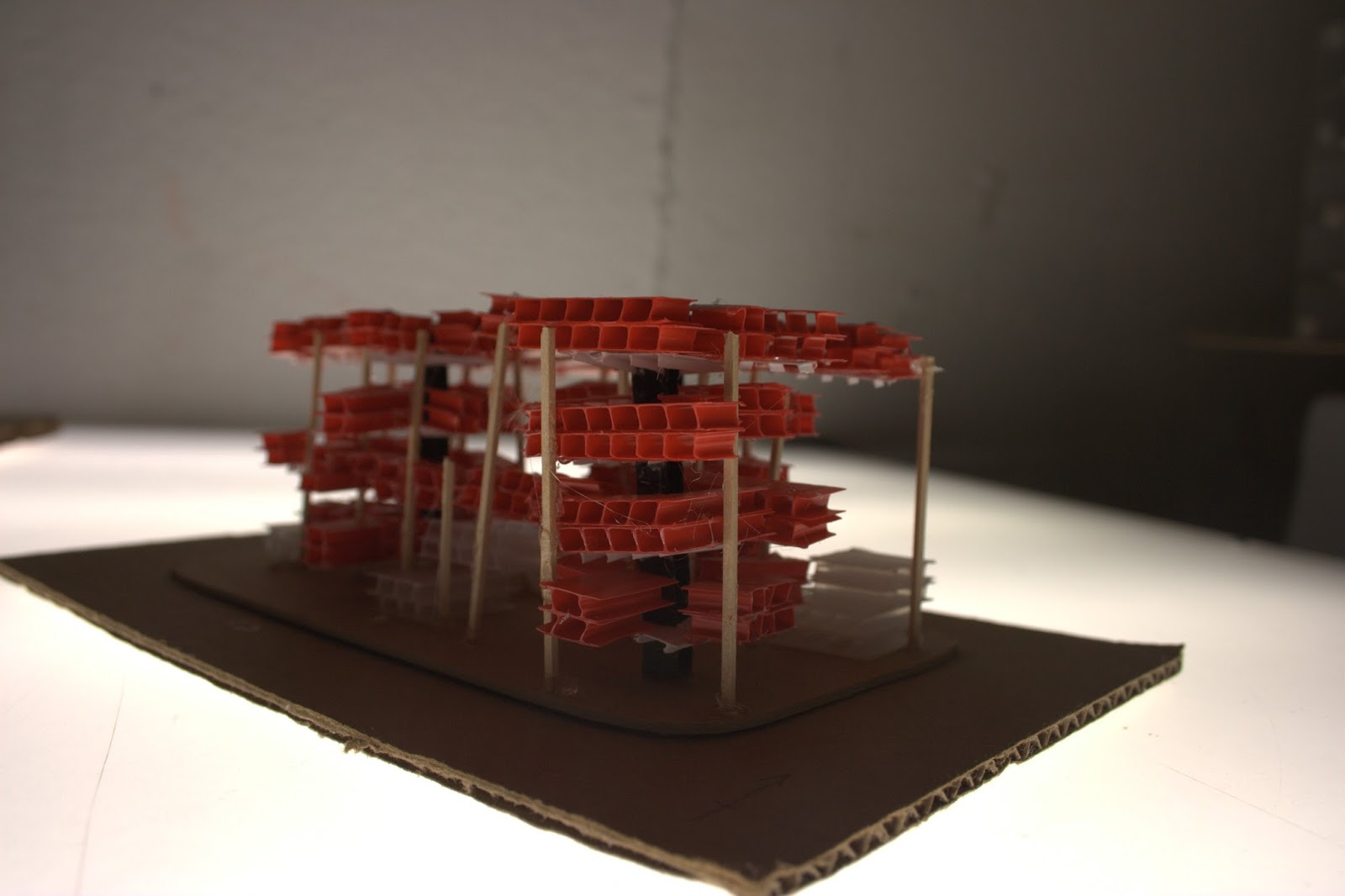 John was a great artist, even apart from his architecture work, and experimented with glass blowing and spray paint. He used left-over material from laser cutting as stencils, and fortunately I took some photos of his work, which he had pinned up around the studio. The pieces below feature the x-shaped outline of our studio project. One time I may have used the school laser cutter to make a Star Wars blaster for Halloween (although of course I would strongly discourage any current students from doing so). John loved the stencil left over from the blaster, so I gave it to him to use in his art, but he never did get around to it… I wish I could have seen the piece he had in mind. 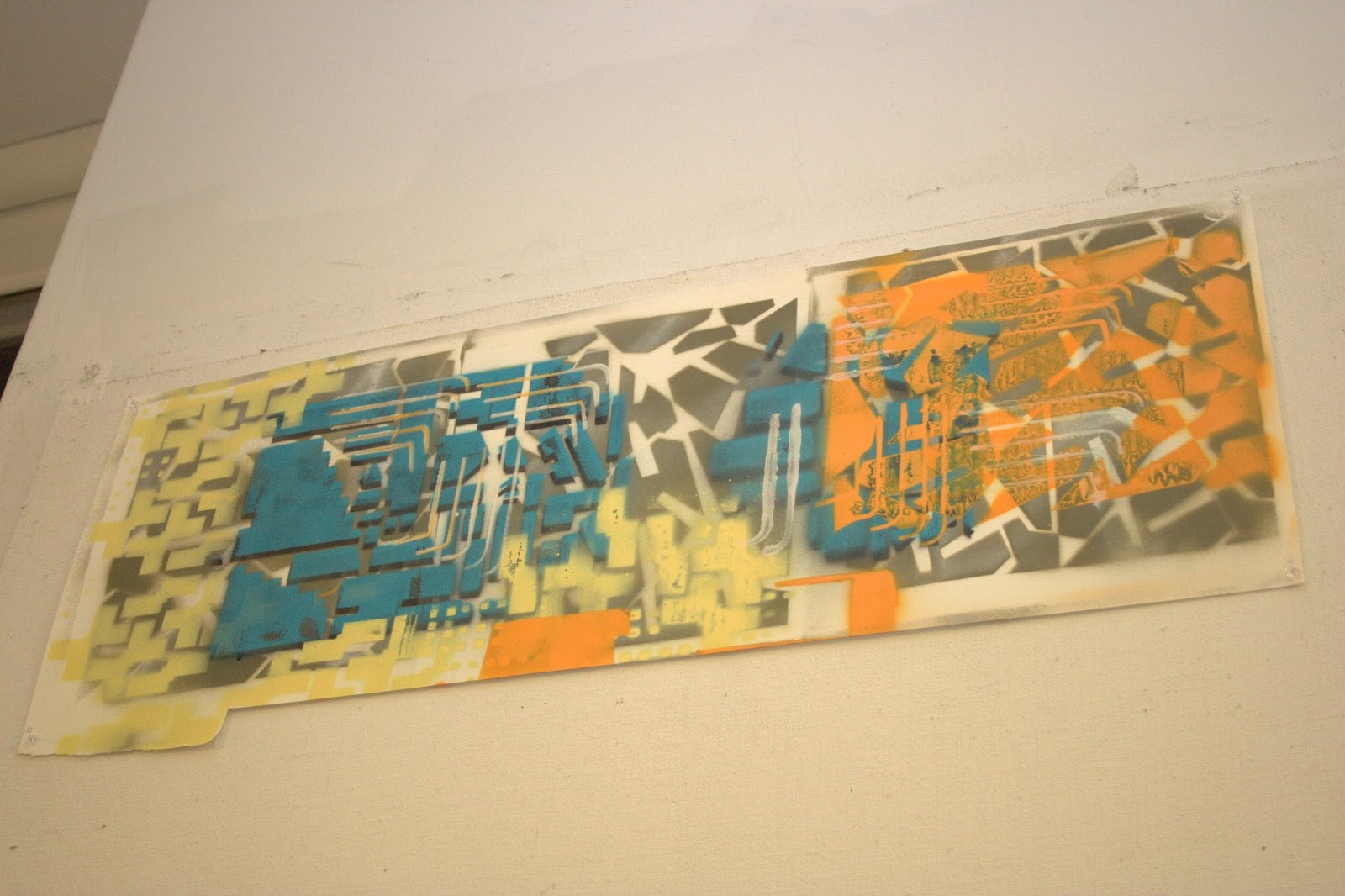 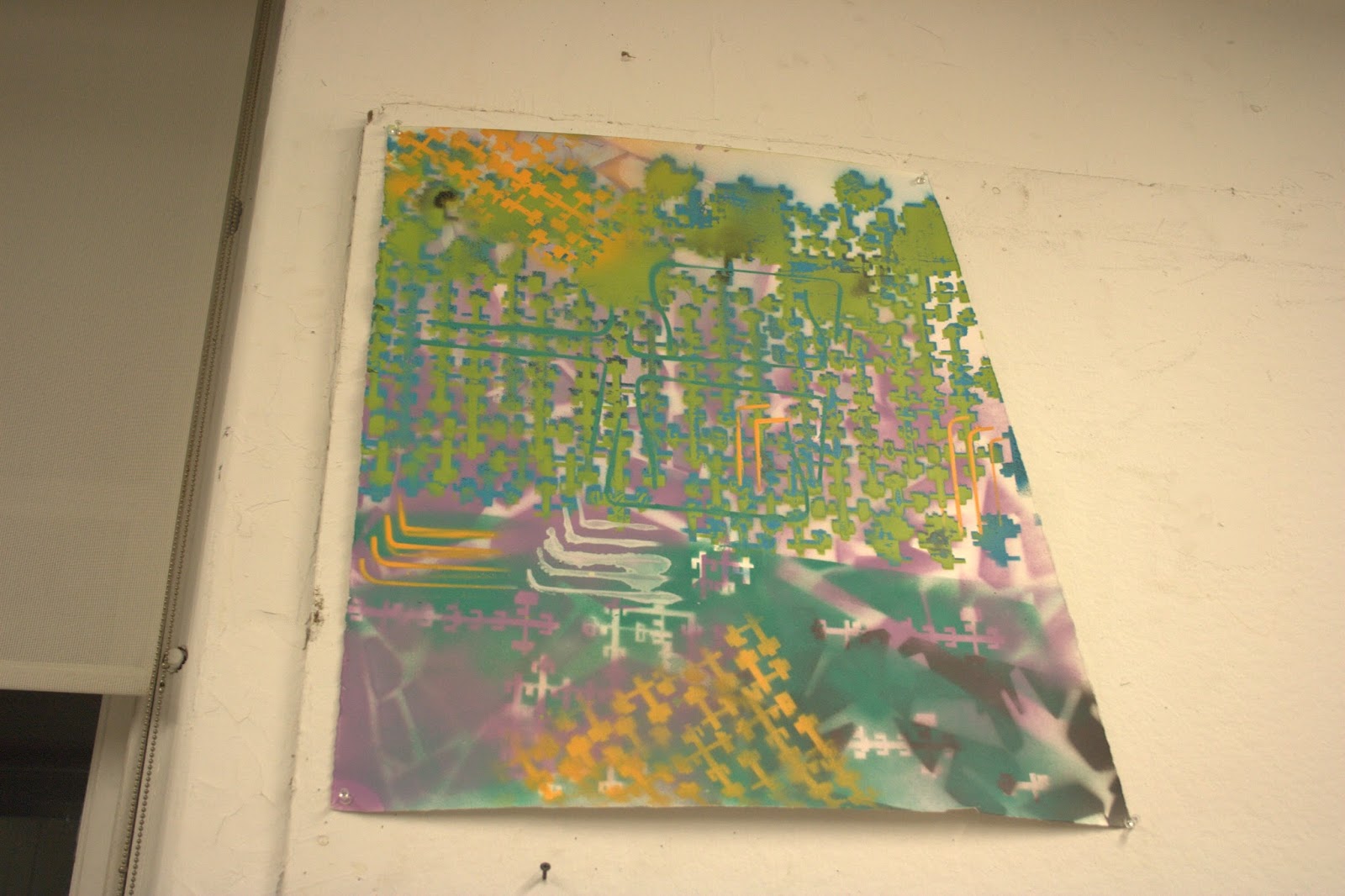 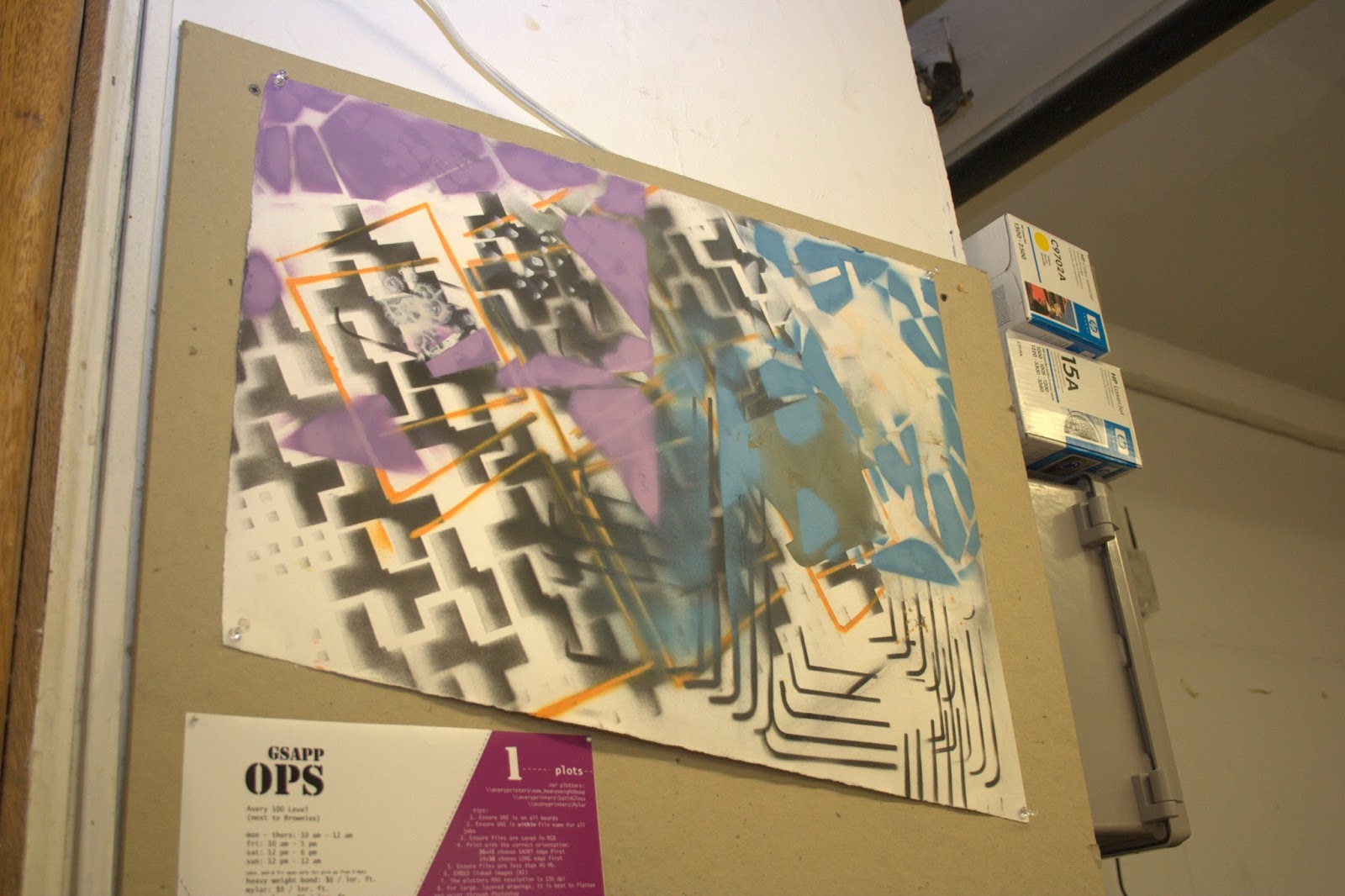 We all envied John his nearby family, with their Costco membership and access to vehicles, but envied not at all his long commute to Queens. I hope his family understood his dedication both to his work at school and to them, which led him continually to make the trips back and forth when many of his friends would have happily hosted him at their apartments near school.

The first time I met John was at our first group studio meeting, Day 1 of Columbia, with Yoshiko. John was the guy who tried to speak to Yoshiko in Japanese and was immediately rebuked. Poor John! Everyone liked him from then on, the sheepish guy who was just trying to be friendly with our strict studio professor. But I think even Yoshiko was secretly pleased with him. Maybe she just didn’t want to seem like she was playing favorites that early. I can’t believe that both of them are now gone. 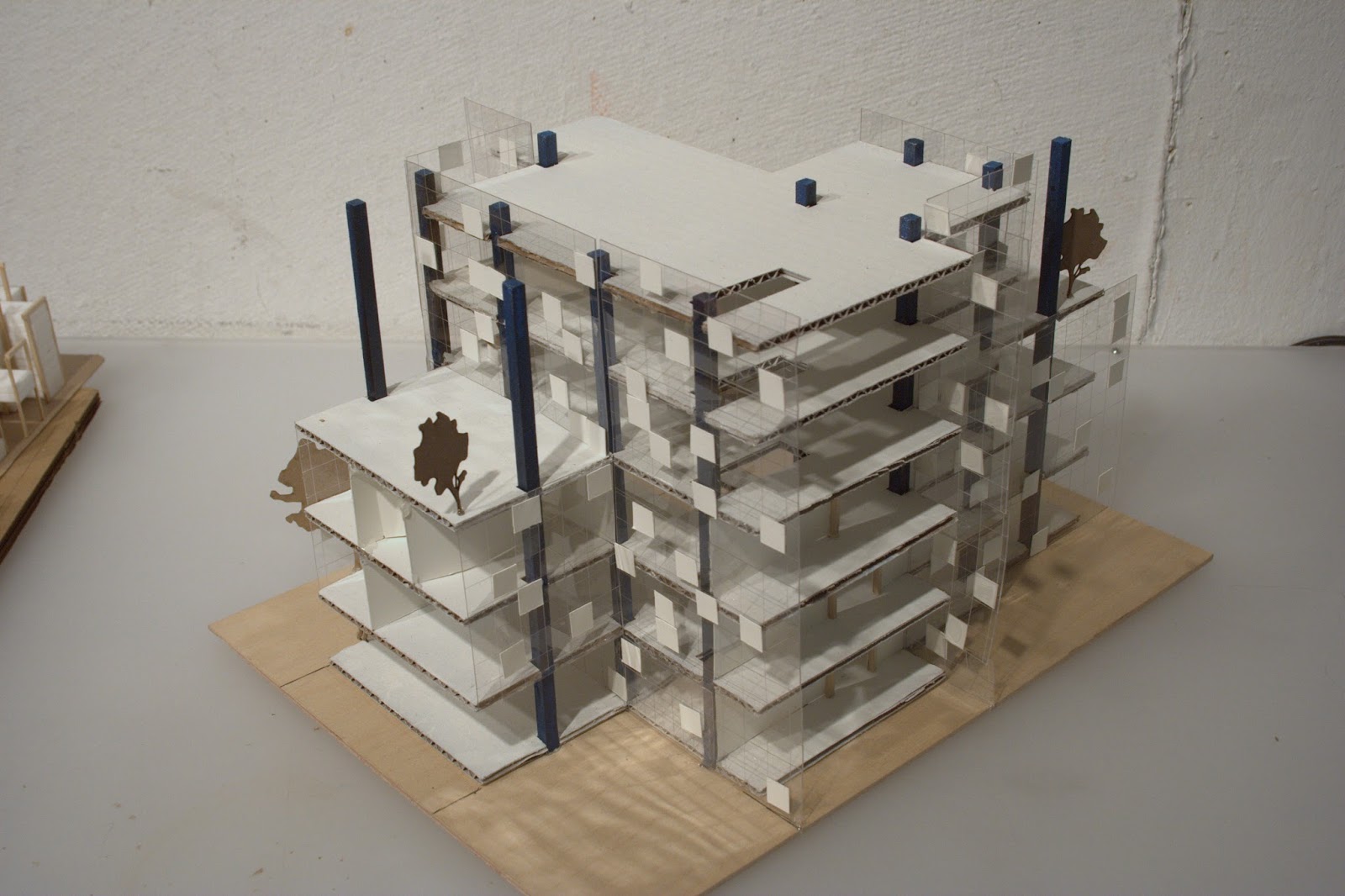 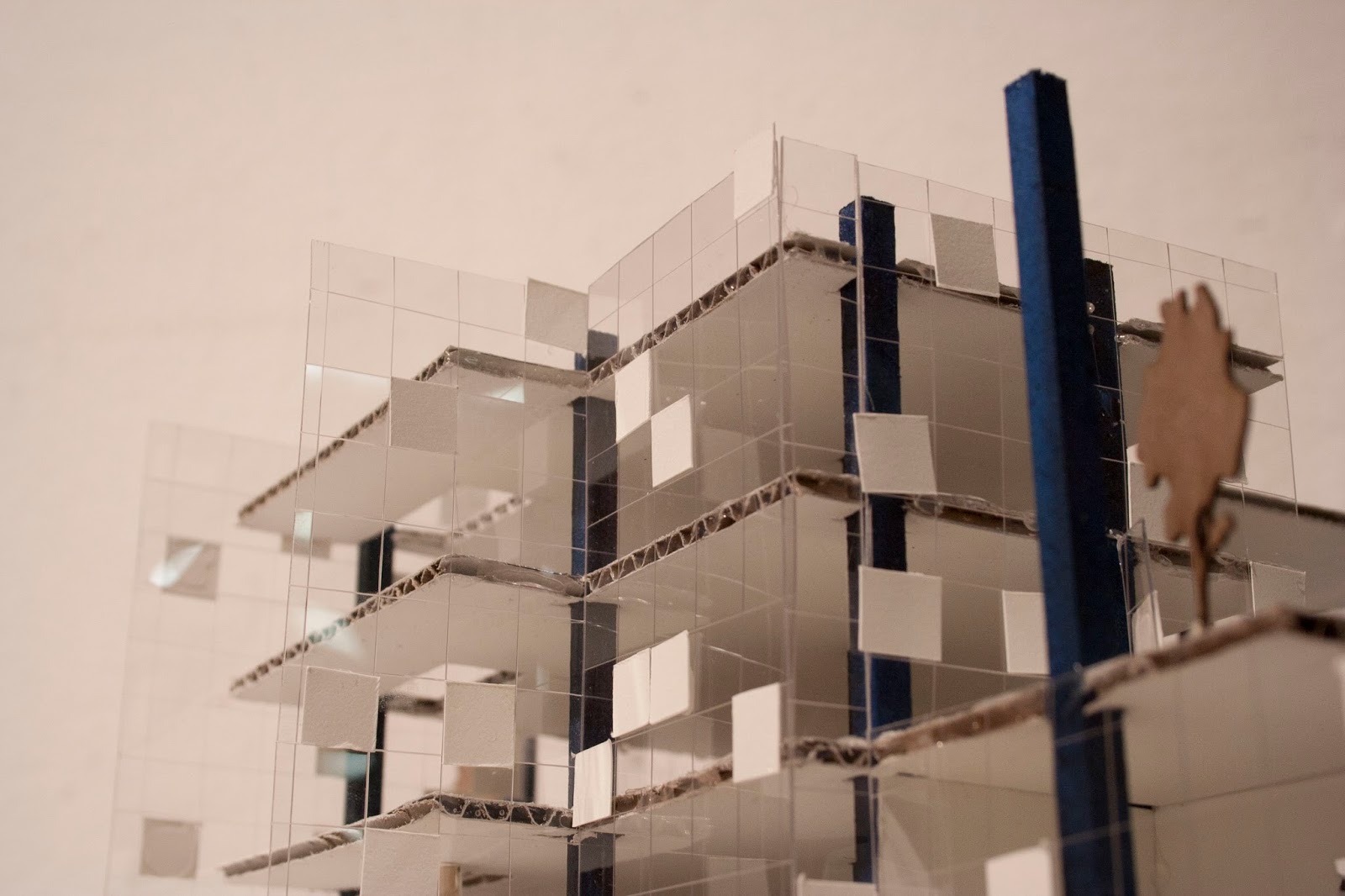 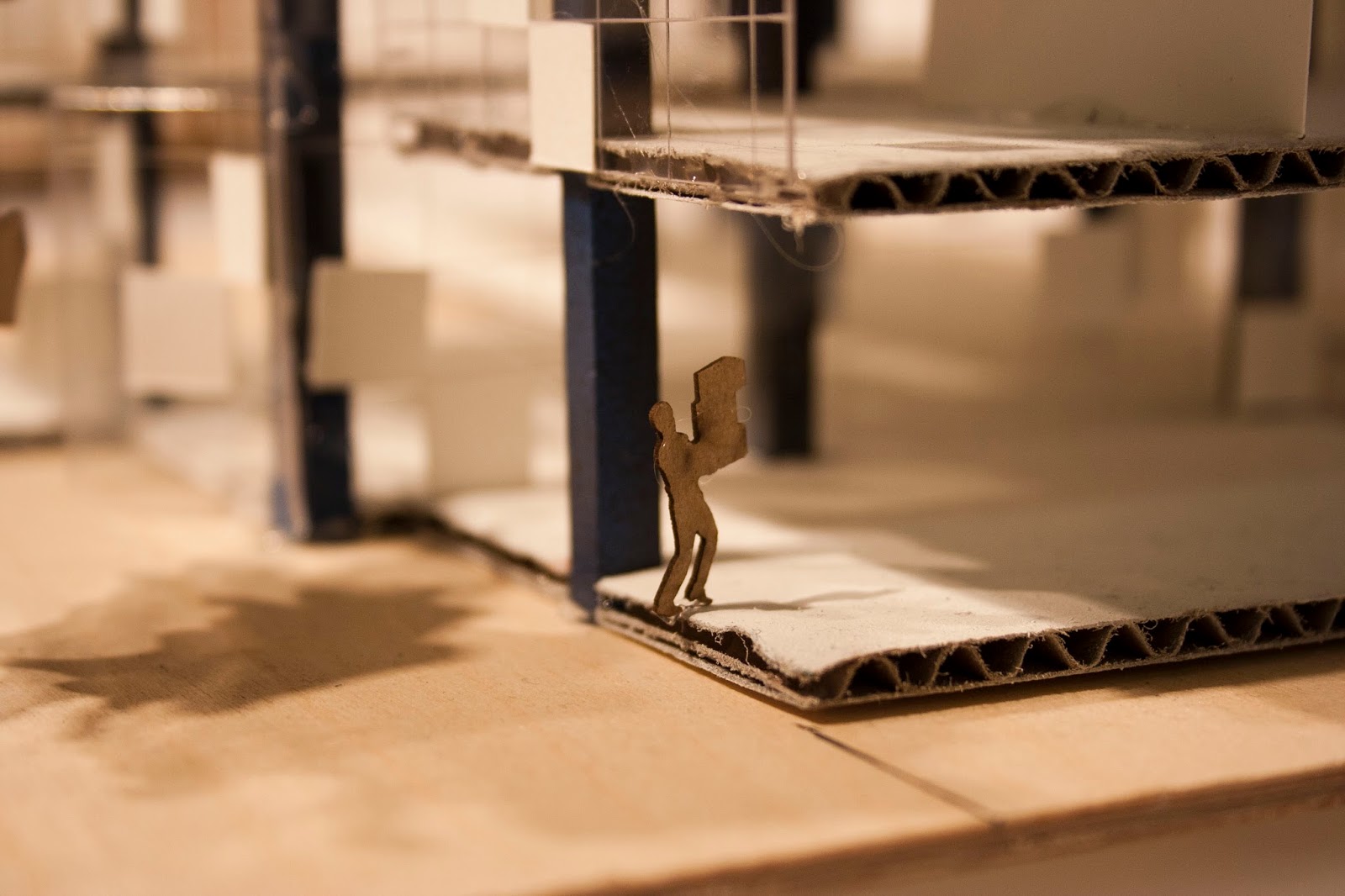 John, I wish I could have seen the architecture you should have created, the art and ideas and music and poetry that you should have produced. While we didn’t have a lot in common besides our shared studio experience, I feel like I would have understood your work better than many. I am sad most of all that no one will get to see it. I think you lived your life with all the spirit and enthusiasm that you could, so I hope you had no regrets. I wish I could have been there for your memorial service, where I’m sure your legions of friends made it clear how much you meant to all of us. Crazy as you were, you were my studio partner, you were great, and I am really going to miss you. 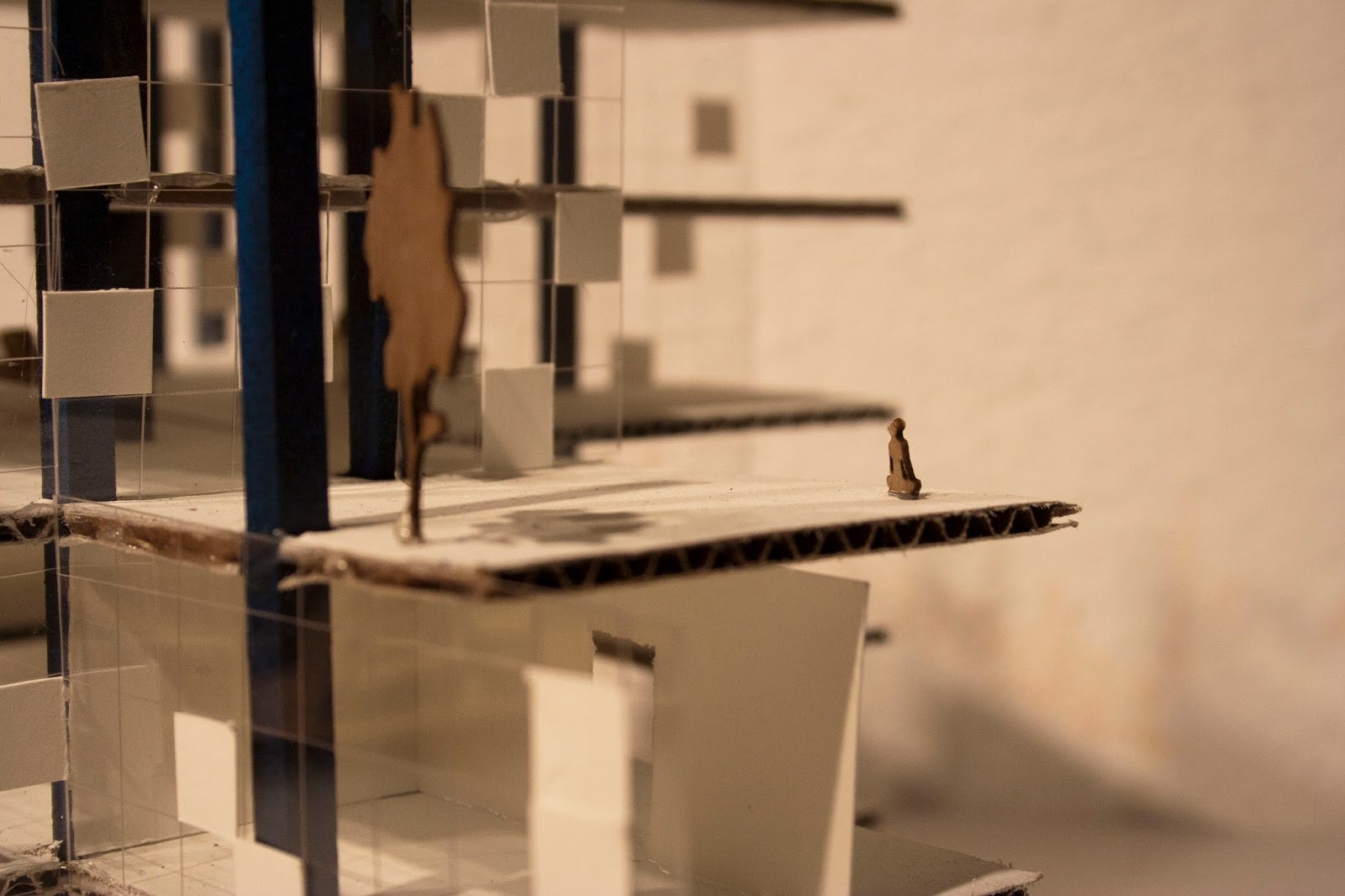 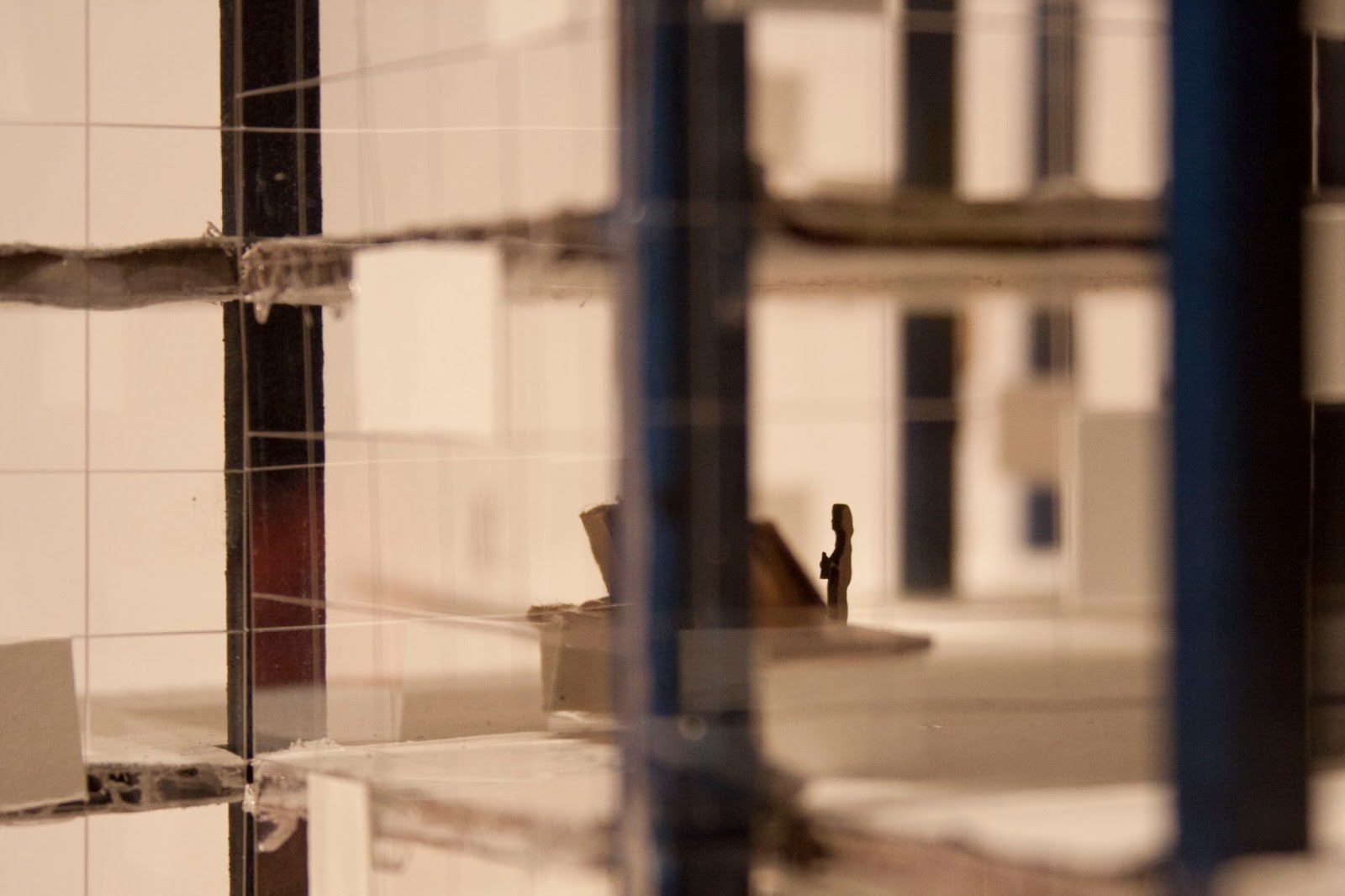 All images are of housing studio work by John Kotaro Barnes, GSAPP M. Arch. 2013. More of John’s work is on his brief blog and sister blog, and an action shot of John at one of his reviews is here. More images of our fall 2011 housing studio project are on my Tumblr here.