I don’t like biking to work. I don’t like it much at all. I arrive at my destination grumpy and sweaty, having fought traffic and other cyclists, the cold, the wind, and my own fatigue the entire way. Now that it’s nearly December, it gets dark early and my 6pm commute takes place after dark. And perhaps worst of all, I can’t listen to music while I ride or do anything except concentrate on the task at hand, for fear of distraction leading to injury. 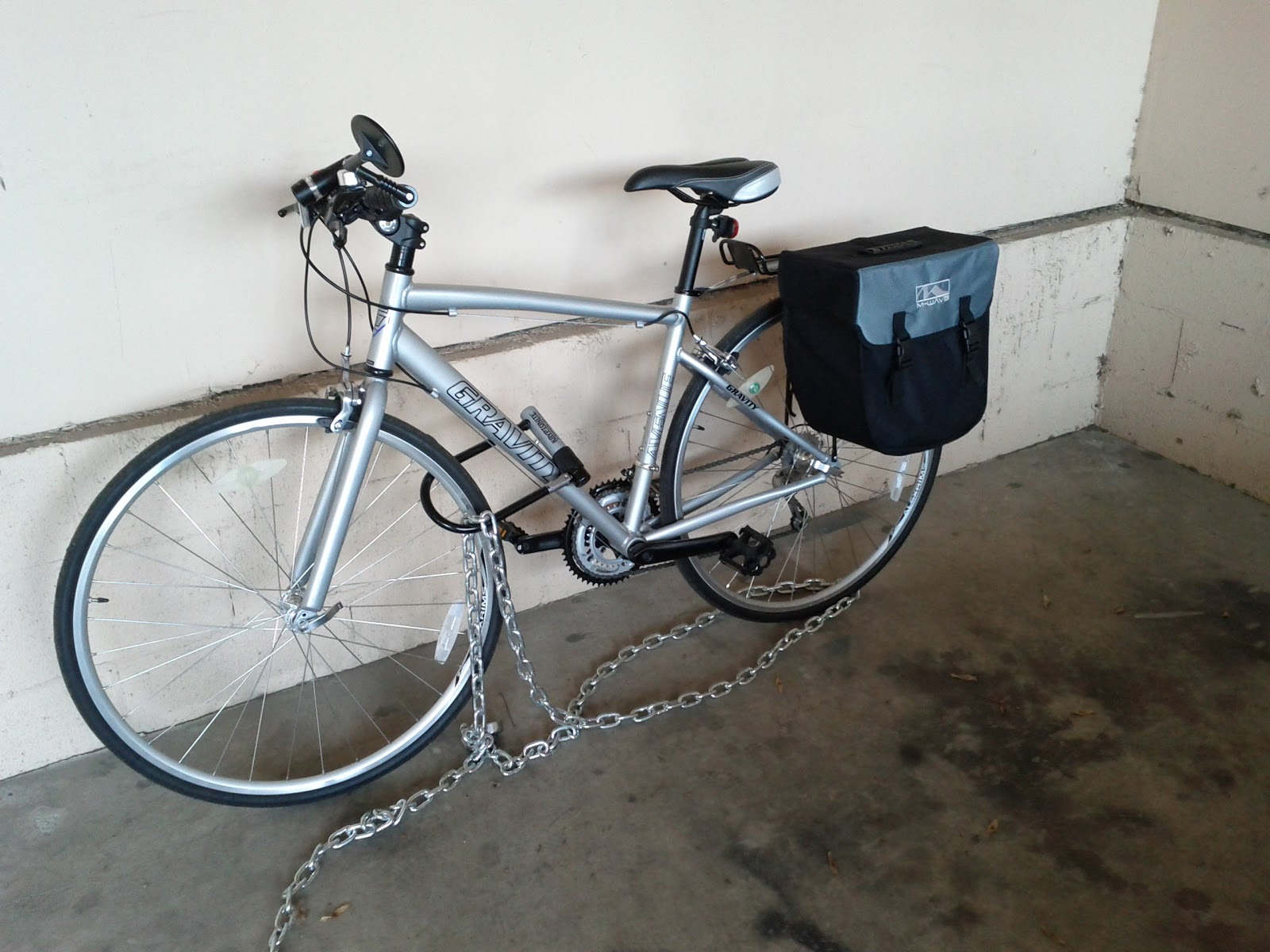 This part of California should be ideal for biking. I live in an area with strong aspirations to be a bike-friendly place. The weather is rarely too hot or too cold for outdoor activities, and it hardly ever rains. There are plenty of bike lanes, and even a pedestrian- and bike-only bridge that allows me to get across a creek without having to take major roads. It’s flat, unlike San Francisco. And lots of other people bike, so it generally feels safe on the roads.

I like to make excuses: I don’t have the right gear; I’m just getting used to it; I need practice to become comfortable. Well, now my bike is tricked out with head and tail lights, a bell, even a mirror, and I have a windbreaker, gloves, glasses, and reflective ankle straps. I have a rear rack with a pannier to hold all my stuff so I don’t have to wear a bag while I bike. I have a high-visibility reflective jacket and lights on my wheels so I’m visible to cars from the side. My bike itself is new, and it’s fast and quiet. I have nothing to complain about.

And yet… I’m tempted to say I hate it. It feels barbaric, racing against cars to make the always-too-short traffic lights, clearly timed for motorized vehicles and not for bikes. I’m constantly afraid of hitting something (an open car door, other parts of a car, another cyclist, a pedestrian…) and of falling over, potentially injuring myself severely. I know people who have recently been hit by cars while biking. I hate it when my fellow cyclists fail to follow standard traffic rules - they pass on the right, and they don’t use lights or bells or signals. They’re often buff athletic guys in cycling outfits who can’t wait to pass me. This isn’t Amsterdam, after all, or Japan, where you can see middle-aged folks in their work clothes biking around town. I feel awkward in my khakis and oxfords. It doesn’t help that the usual work dress code in this area is a t-shirt and jeans - it’s possible that the guys I see biking in the mornings don’t have to change out of their cycling jerseys when they get to work. Compared to the convenience of taking the subway, or, in this area, of driving, it’s becoming harder for me to argue that biking is really an equivalent form of transit. When it rains, biking becomes unsafe, and at that point I don’t feel comfortable biking at all. In short, my bike is not a sufficient method of transportation; I can’t rely on it as my sole means of getting to work.

And yet again, I feel like I’m taking an ethical stand for something when I ride: for exercise, for directly experiencing one’s neighborhood, for quieter streets, for less pollution, for less fossil fuel use*, for cycling as it could be. It could be fun, if more people did it, and if we had better bike lanes, fewer cars on the road as competition, and more vigilant drivers. What about dedicated bike streets, with better street lighting on those streets? This area doesn’t (yet?) have the population density for real light rail, and Caltrain is too infrequent and accident-prone to make sense to use for the short distances I’m traveling. Biking is makes a lot of sense from a transit perspective. So I guess we’ll see how long I last on moral fortitude alone - if only biking was more, well, fun! If you have any suggestions, I’d love to hear them in the comments.

For some tips on cycling safety, check out this website.

*Since food production usually involves fossil fuel use, understanding the fossil fuel required for cycling means understanding where a cyclist gets her calories (which she uses to power the bike). An interesting discussion of this concept here.