Back in February, over President’s Day weekend, we visited my sister in LA and spent a couple days seeing the city. This was my first visit, and only my second trip to southern California. Here’s a map of the places we visited (or wanted to visit). We drove down along the 5 at night - a pretty boring drive - and stayed in an Airbnb in what I think was West Hollywood. On the first day of our visit we walked around Hollywood, seeing Grauman’s Chinese Theater (home of the Star Wars premiere in 1977, among many other movie premieres) and the Capitol Records Building. The area near the theater felt like a smaller, slightly more subdued version of Times Square. 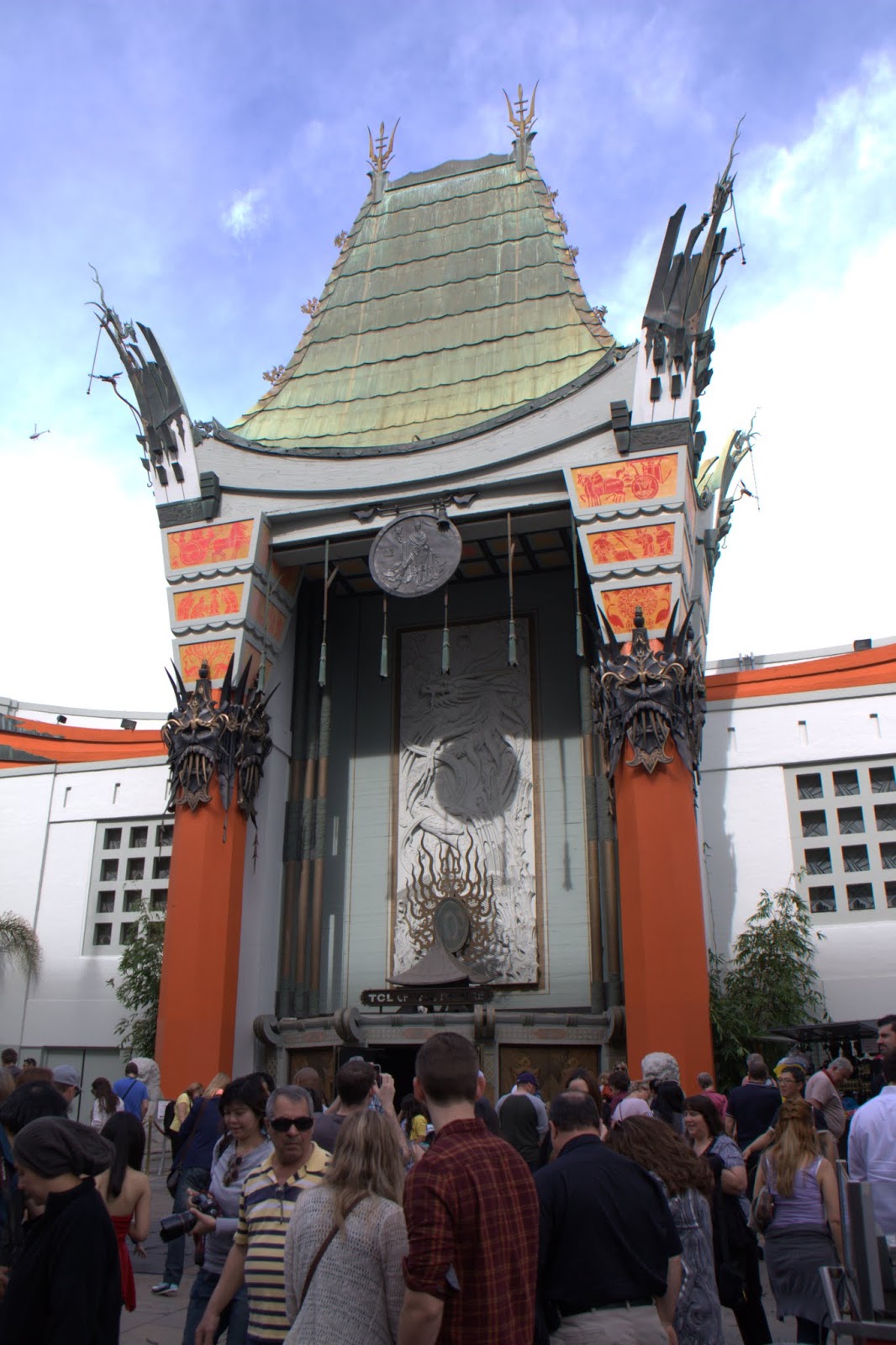 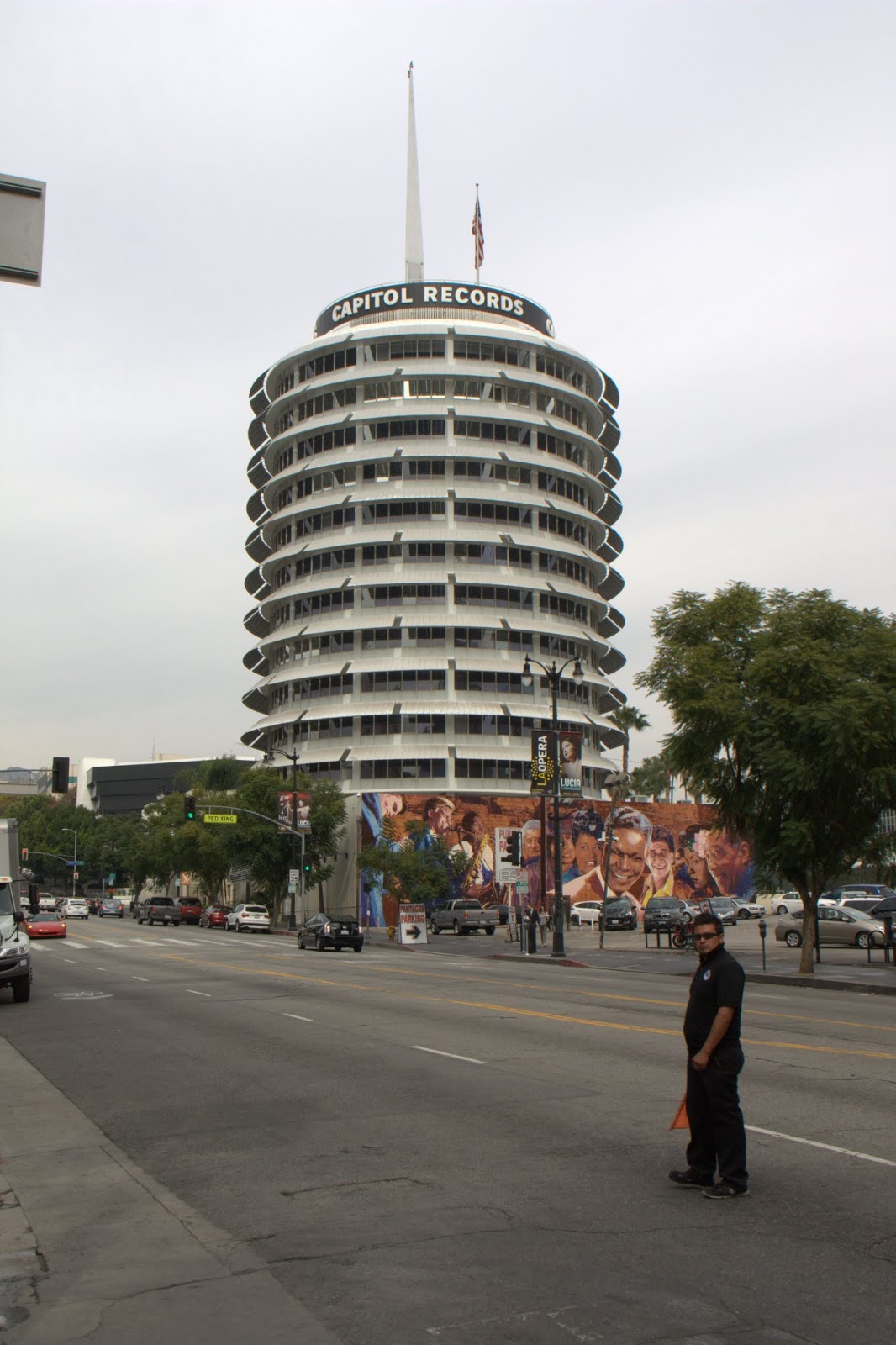 We then took the subway a short distance just to see what it was like. The subway stations we visited were remarkably clean and interestingly-decorated, although since we only took the train one or two stops, I can’t really comment on the overall condition of the system. The station at Hollywood & Vine was covered with film reels and had film cameras on display. 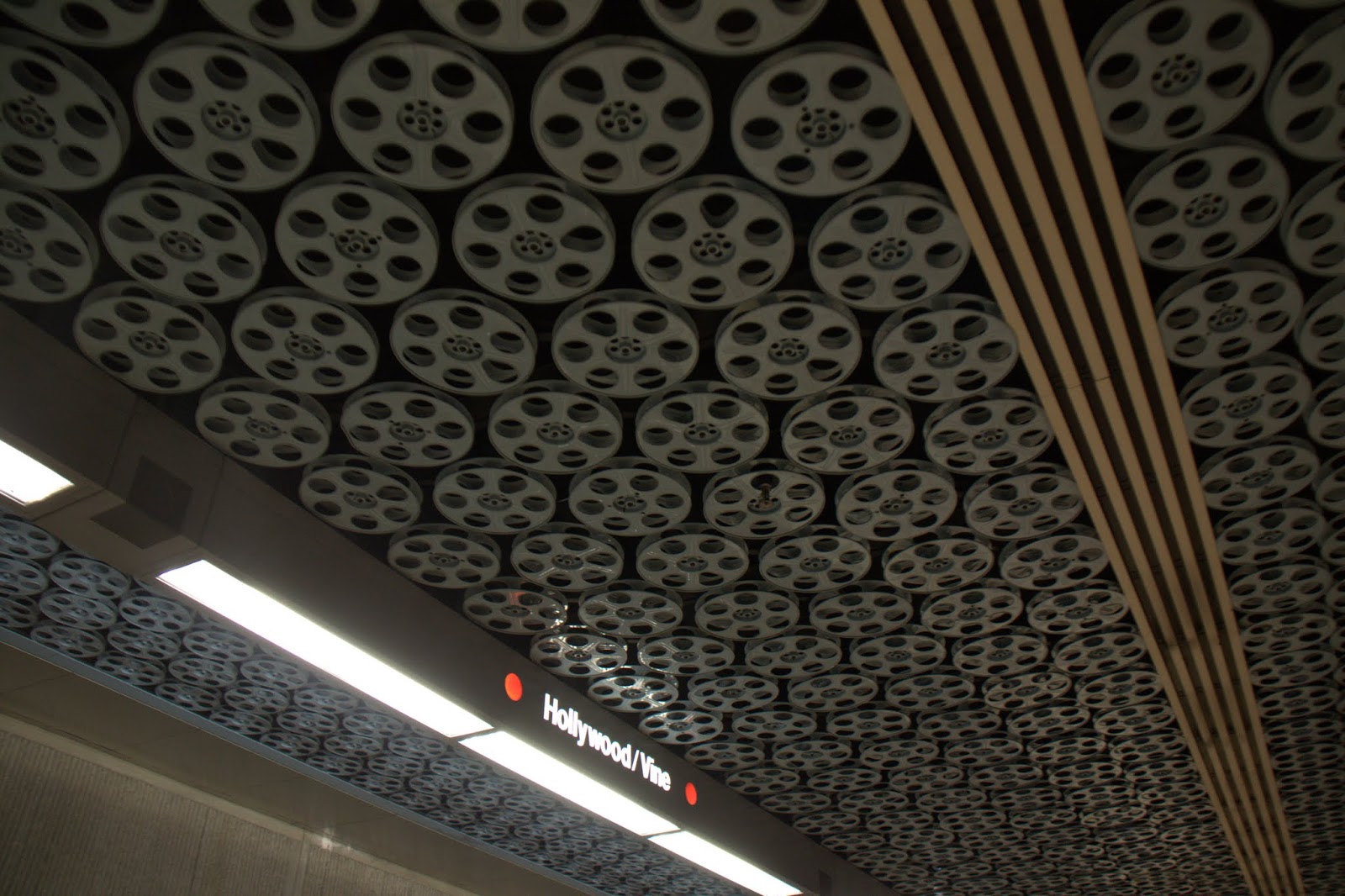 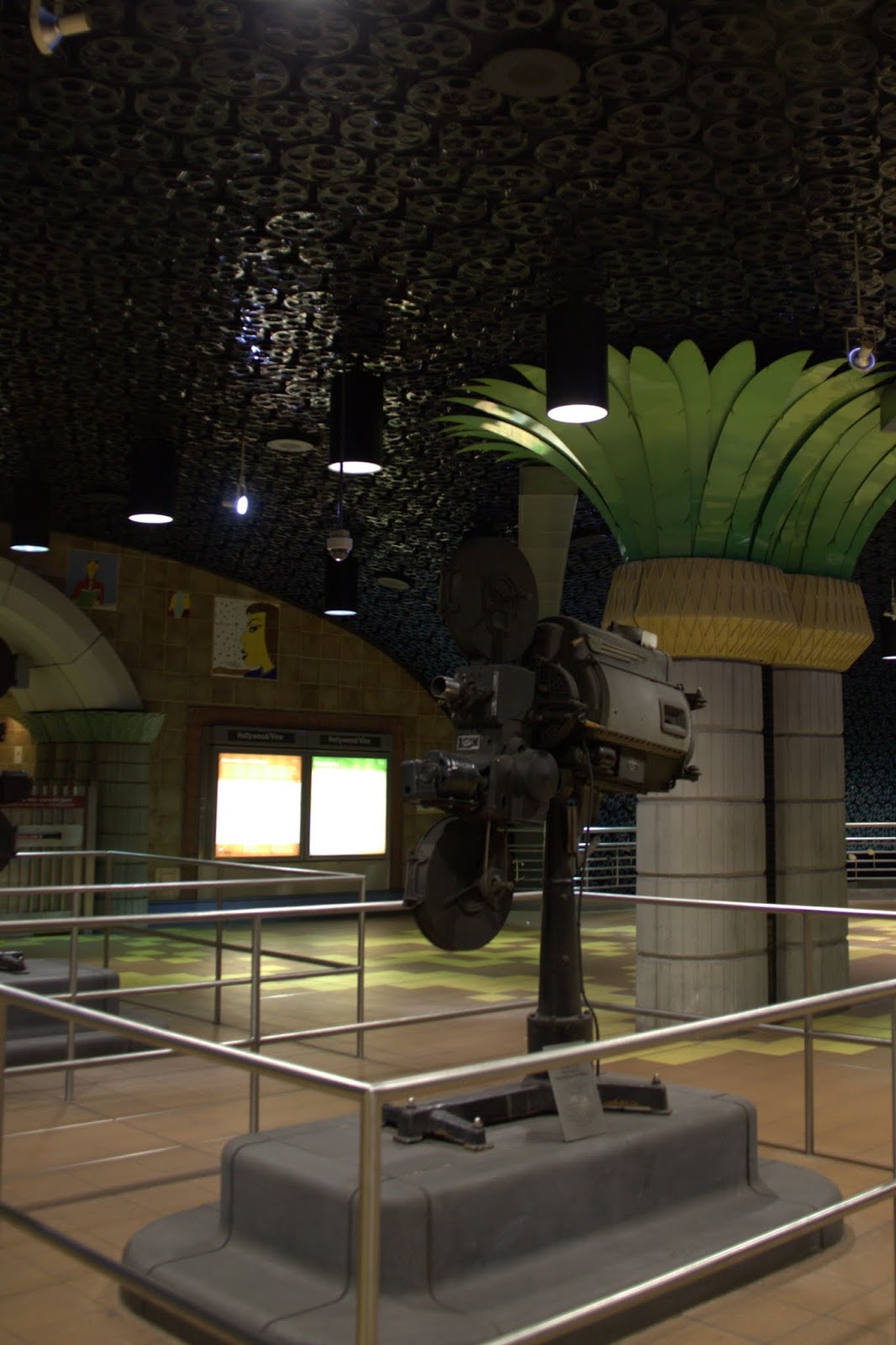 Downtown, we checked out the Bradbury Building, where part of Blade Runner was filmed; it has a beautiful cast-iron atrium that’s open to the public during business hours. And of course, it wouldn’t be a legitimate trip to LA without visiting Gehry’s Walt Disney Concert Hall. We walked all the way around it on the raised pathway that rings the building, with great views of the city and some interesting moments of interaction with the building. At certain points the exterior skin is “peeled away” to reveal views down into the lobby and side theaters. The titanium skin is somewhat loosely jointed at the sharp corners, and in other places reveals the structure holding it up. I’ve never seen a more over-engineered building, with so much structure required just to make a statement. But for a building that’s supposed to grab your attention, it definitely works. 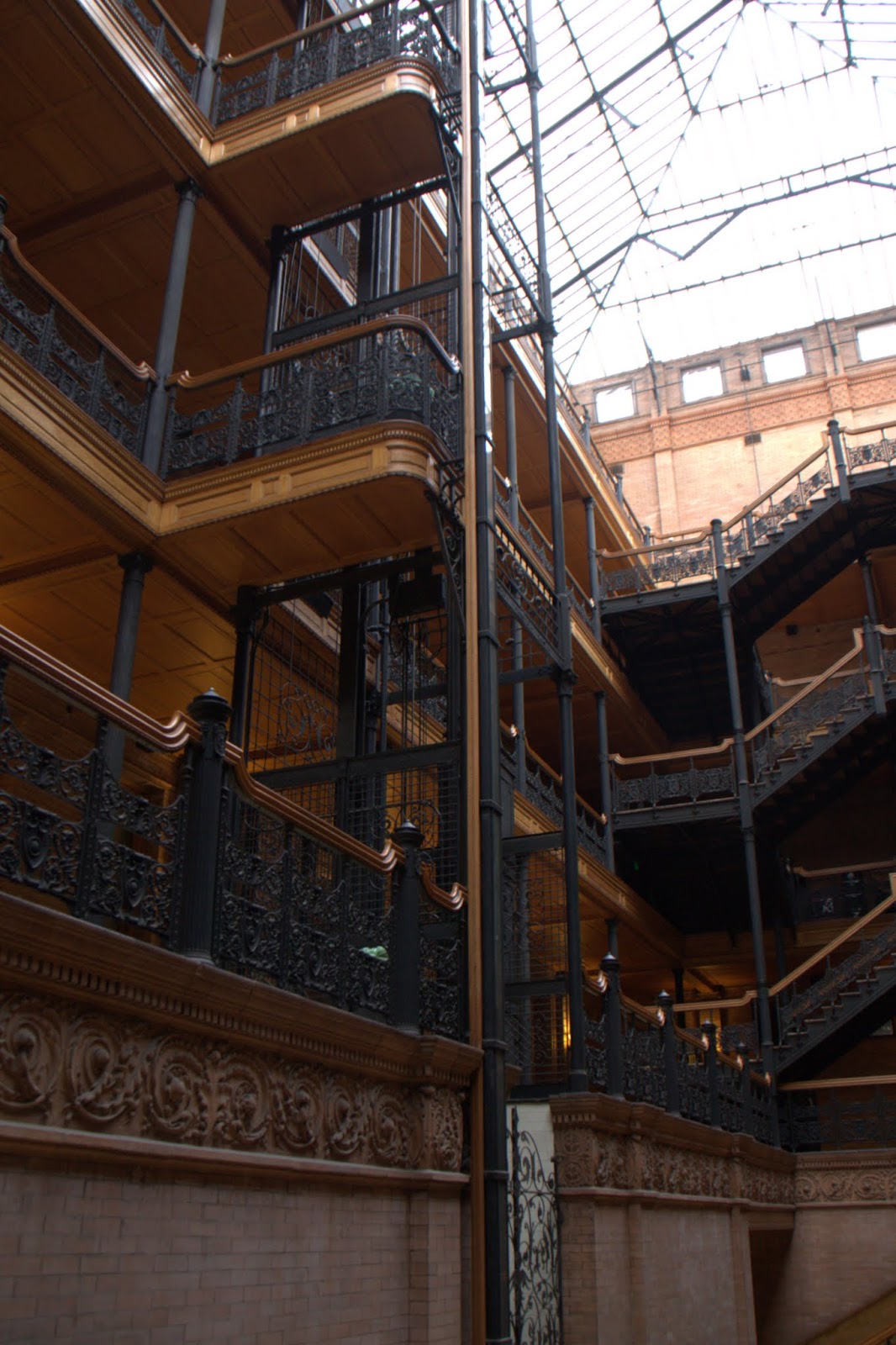 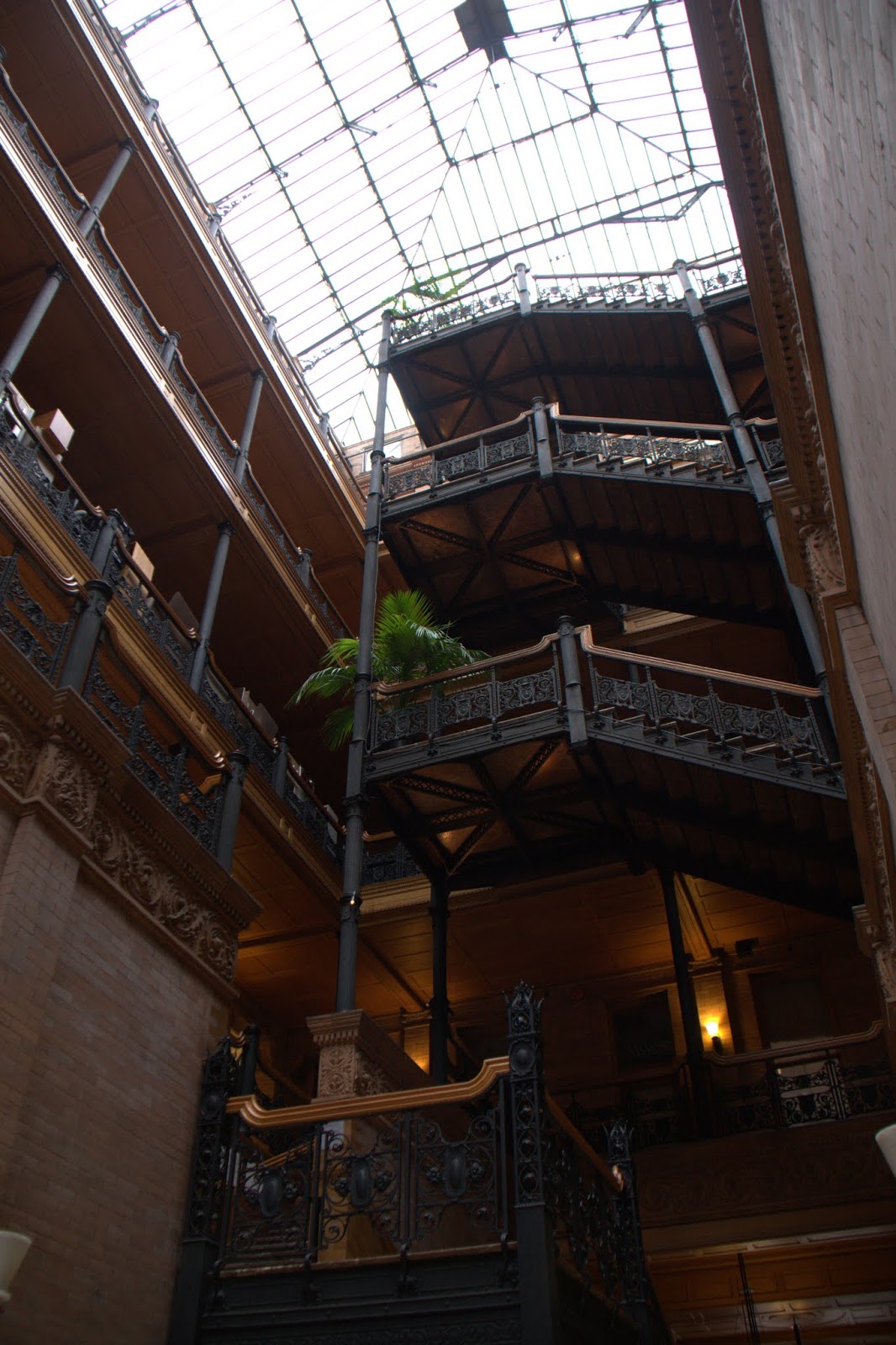 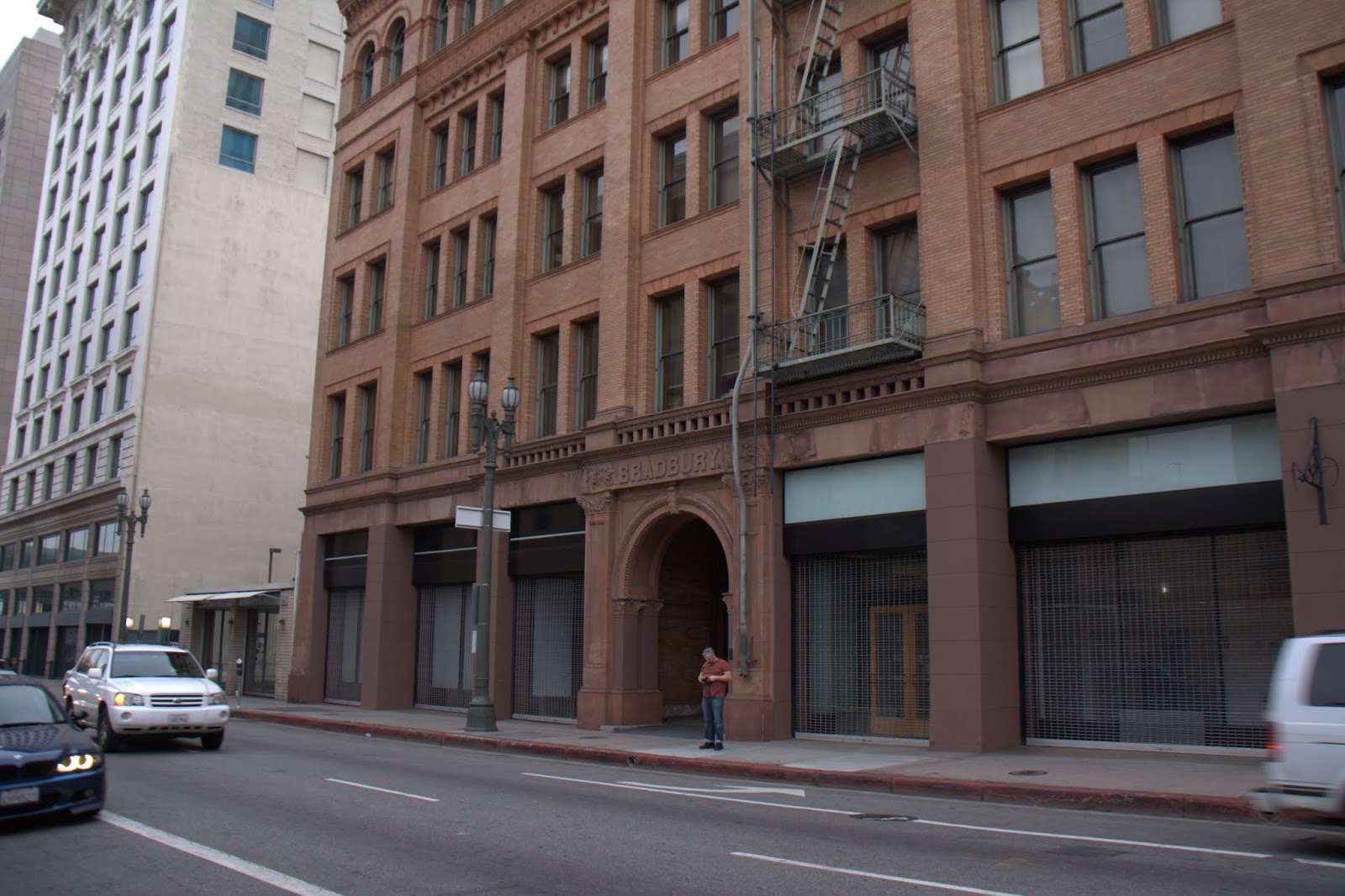 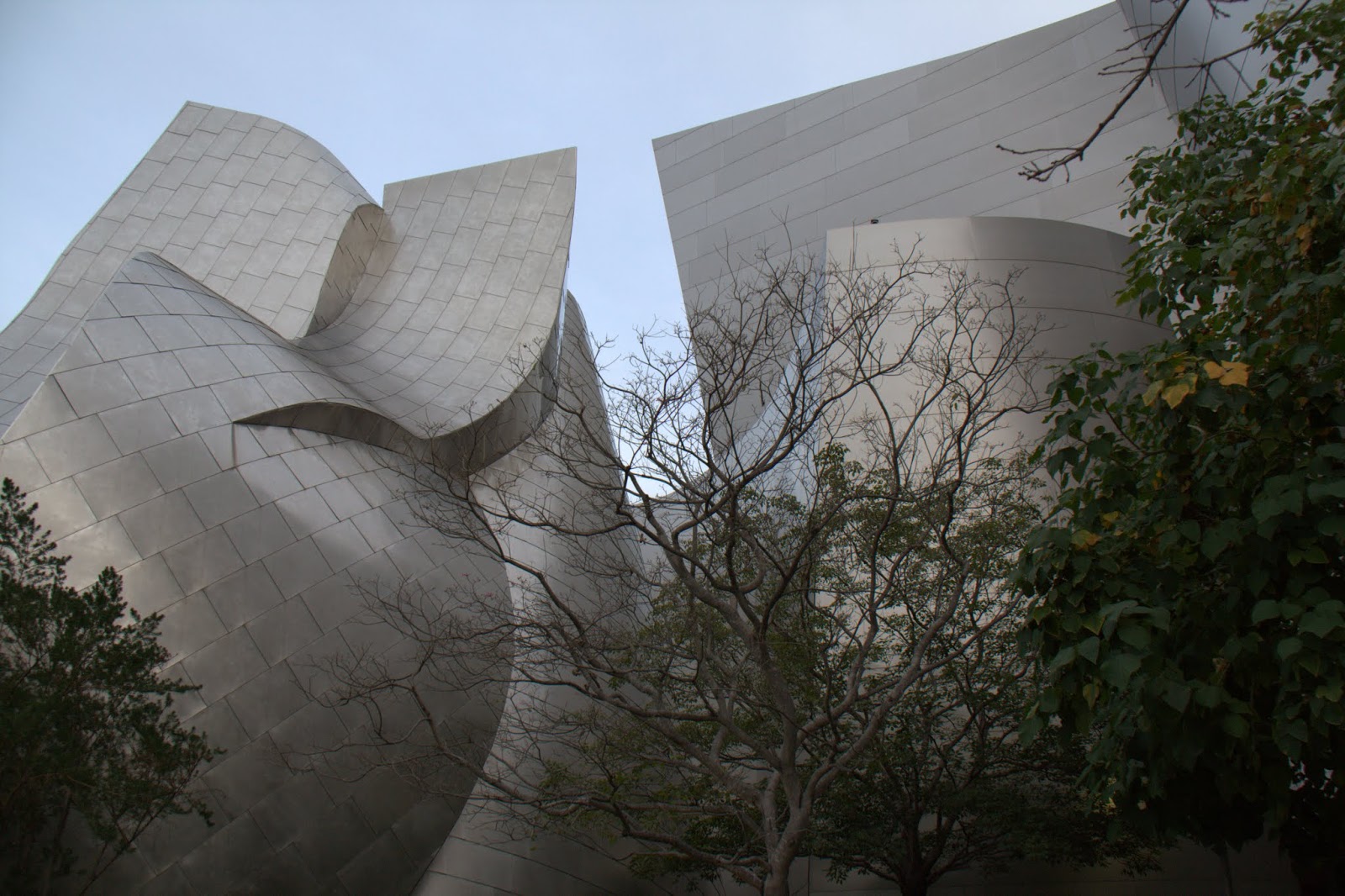 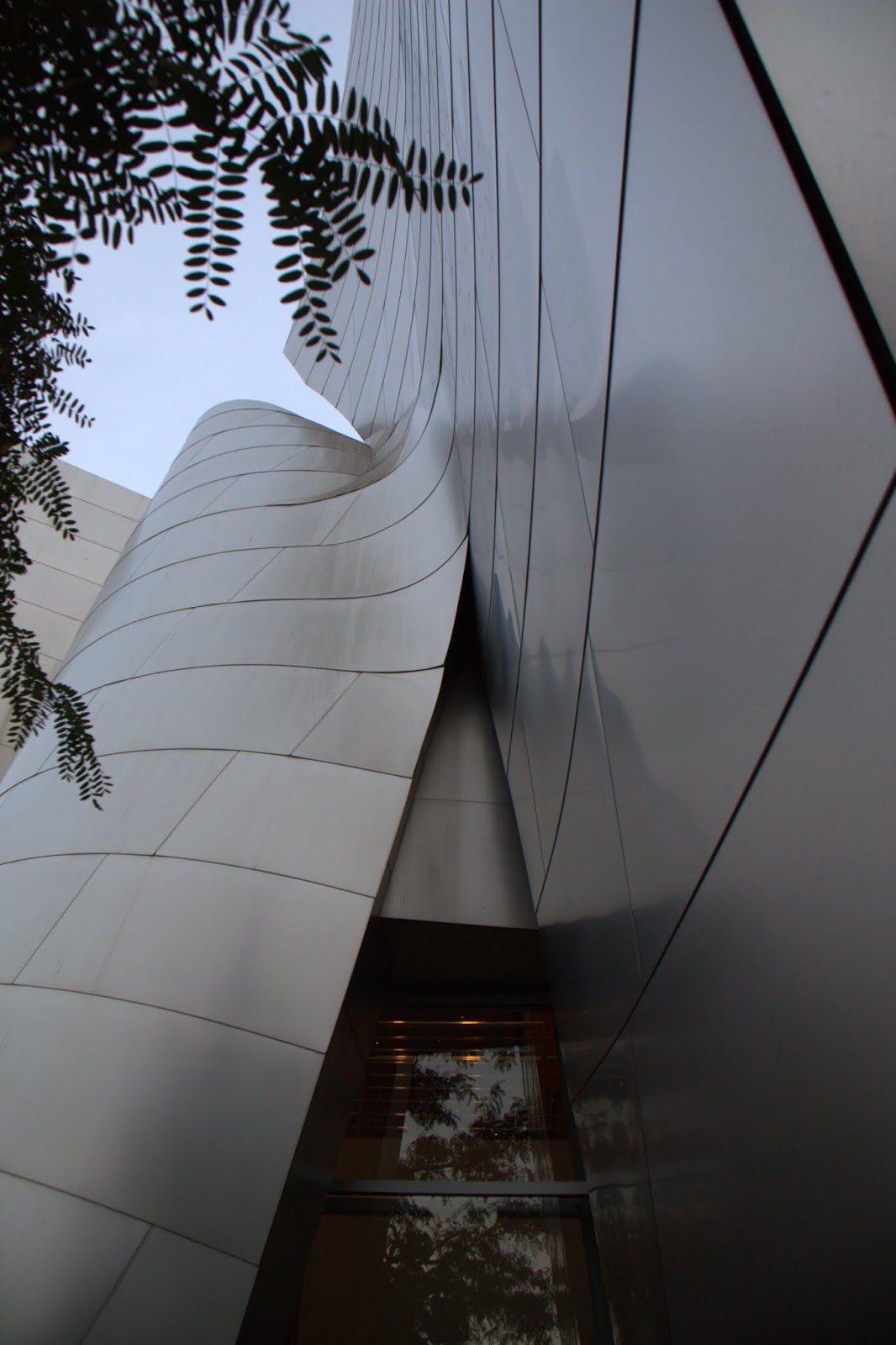 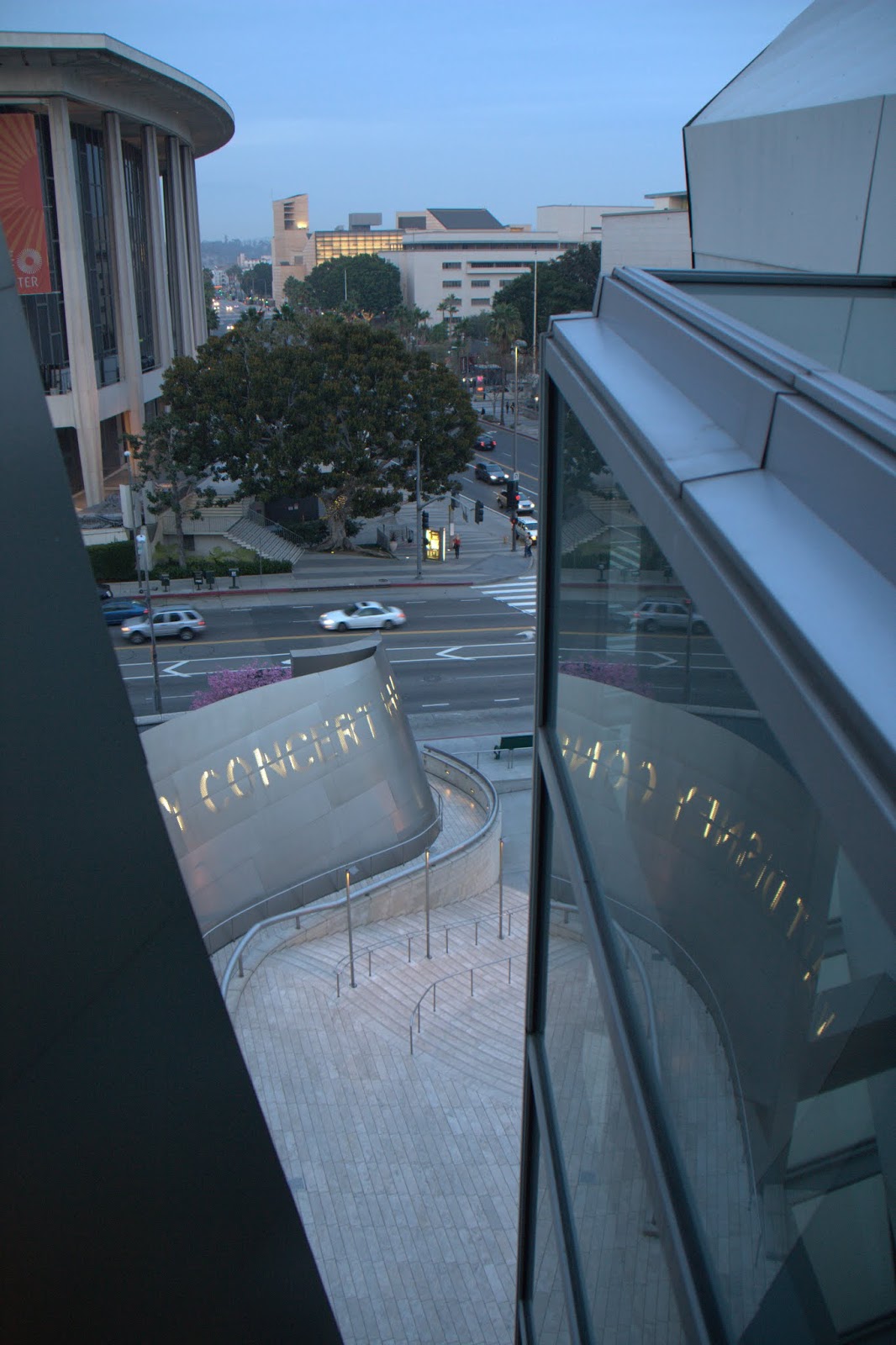 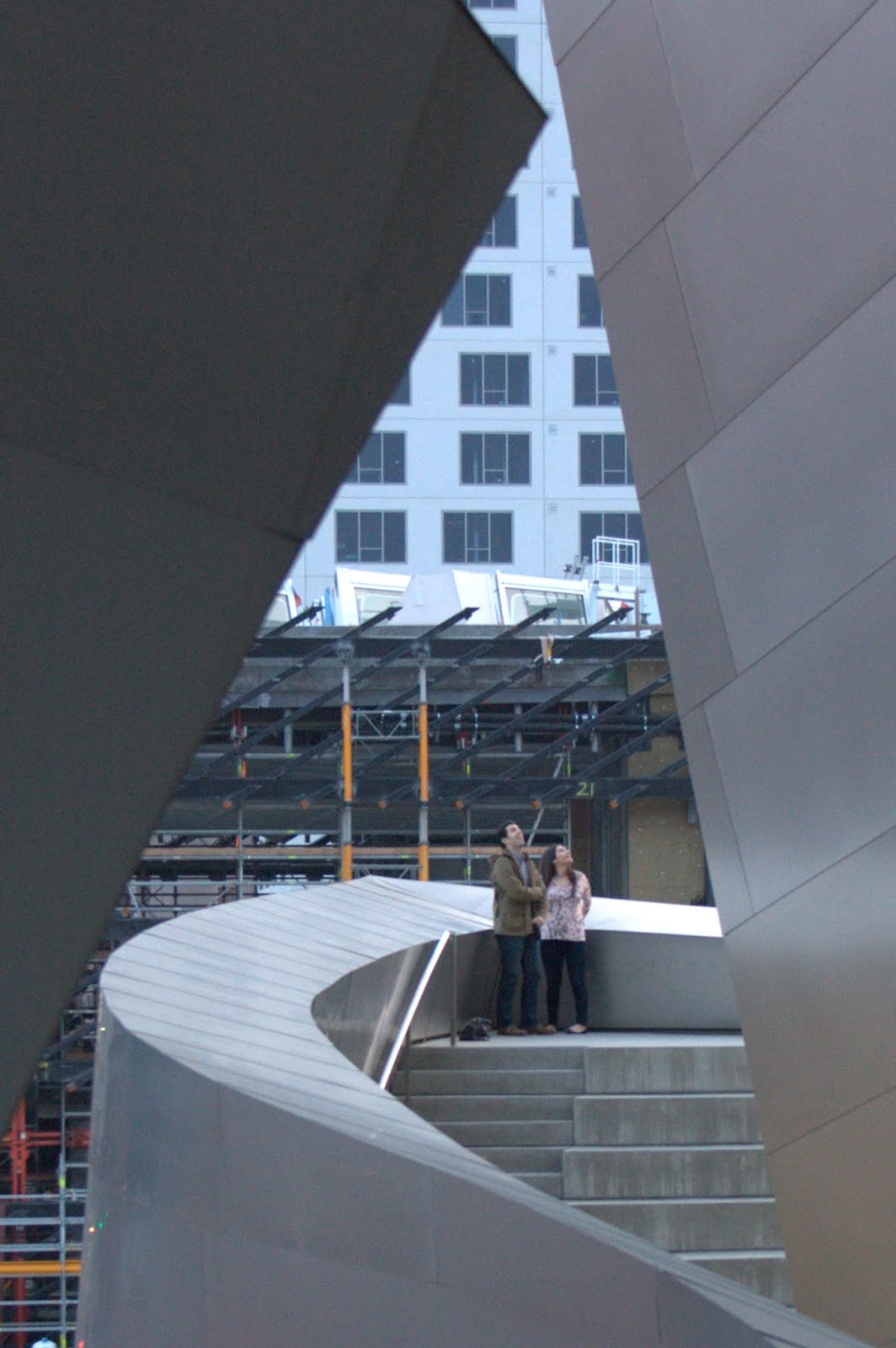 Our second day we spent time with my family, then in the afternoon/evening went to the Los Angeles County Museum of Art (better known as LACMA). We saw Levitated Mass, the gigantic boulder suspended above a long ramp that allows visitors to walk beneath it. I think this piece is interesting less for its actual form than for its history of production. The project took years to achieve, including a years-long permitting process for moving the boulder from the quarry where it was excavated to its final location in LA. None of that process is evident in the final work, which I think is something of a missed opportunity, although I can understand that the work isn’t really about that. (According to LACMA’s website, Levitated Mass “speaks to the expanse of art history, from ancient traditions of creating artworks from megalithic stone, to modern forms of abstract geometries and cutting-edge feats of engineering.” Nothing here about city planning, infrastructure, or permits.) The NYTimes ran a whole series of articles about the process, which was fascinating and amazing in its complexity and execution. Imagine moving a 340-ton boulder, by night, along the highways and city streets of California, in a custom rig, having to avoid bridges, telephone wires, unstable infrastructure, and angry neighbors who think any disruption of their streets is anathema. I’m still amazed that they managed it at all! 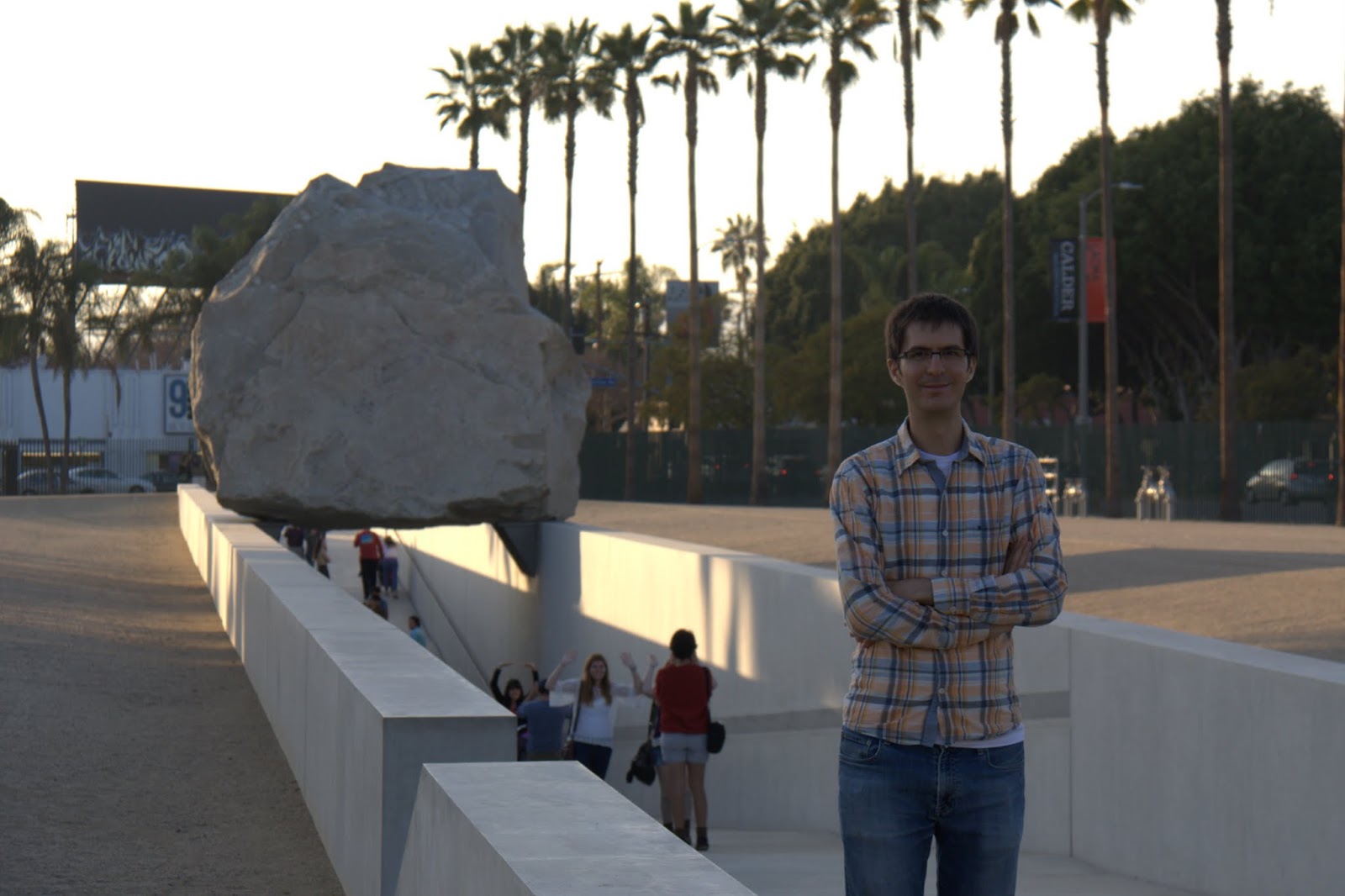 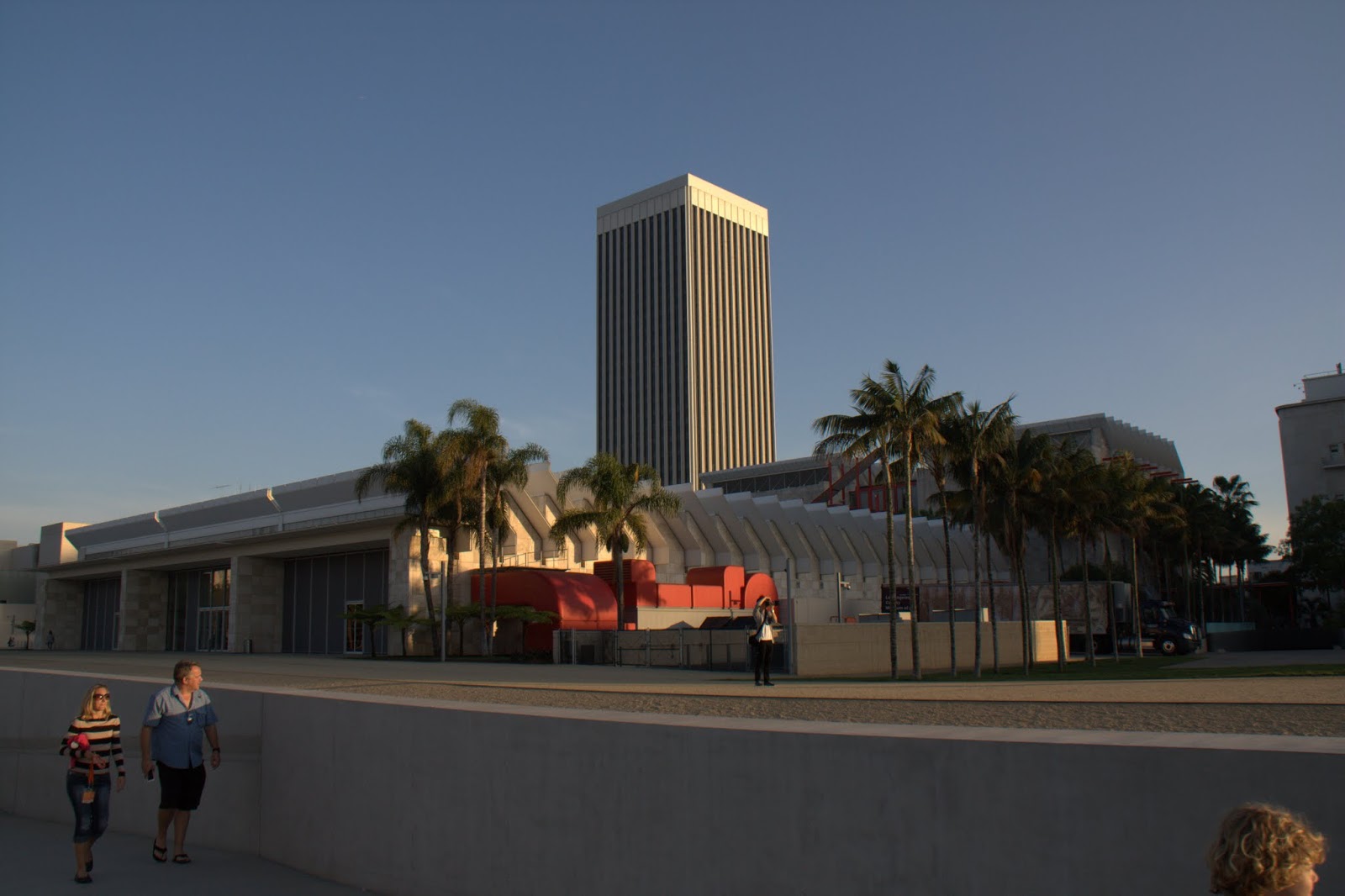 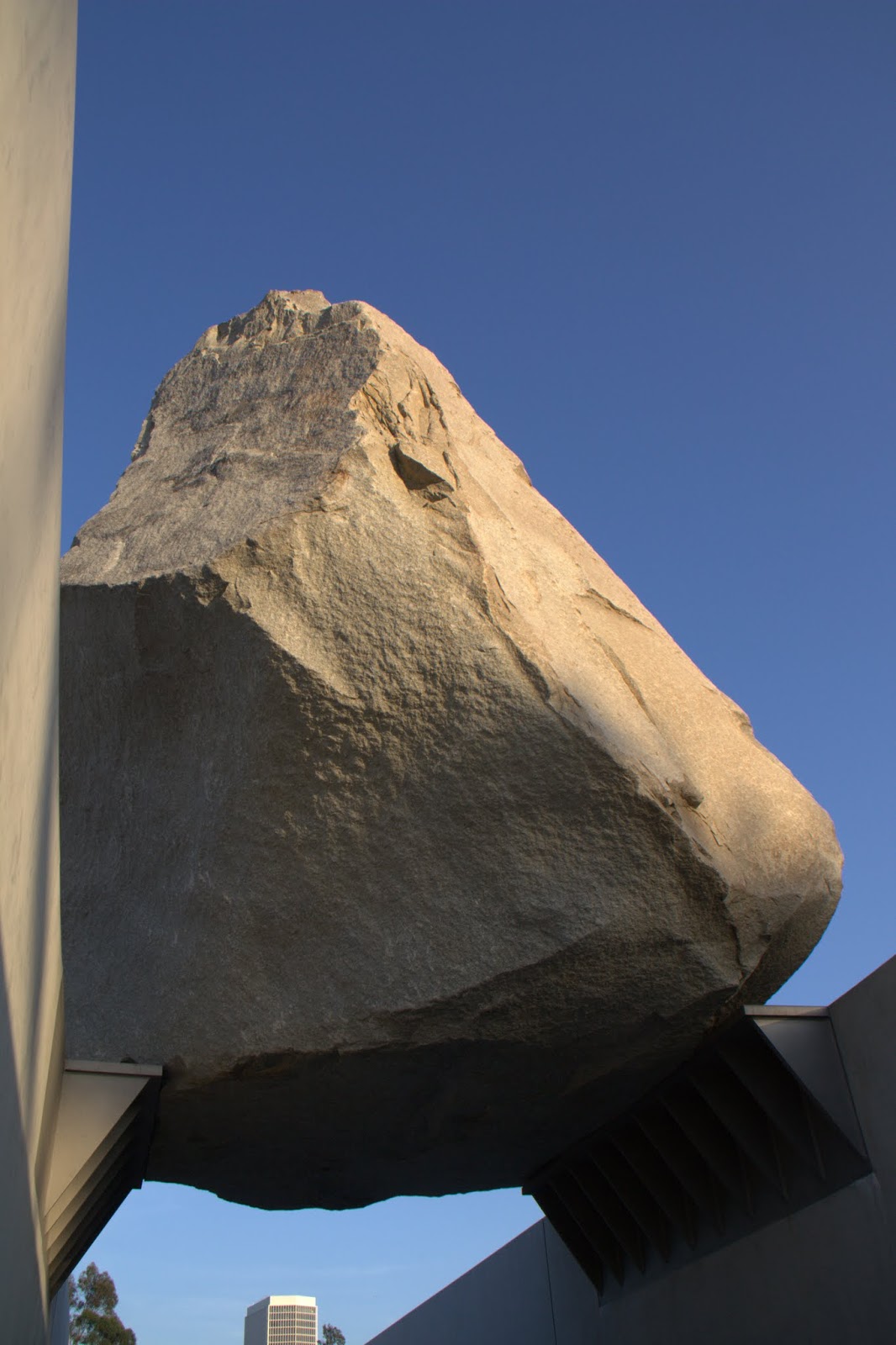 We also saw an Alexander Calder exhibit and some cool large-scale sculpture in the contemporary wing. The Calders were interesting, but I don’t know enough about kinetic sculpture to have a good appreciation for what we saw. We also ran through the rest of the museum just to get a sense of what else was there (they have a Rietveld chair!). Unfortunately, we couldn’t visit the James Turrell exhibit that was also going on, since tickets were sold out - oh well! I had been hoping to see that one in particular, since the one Turrell piece I’ve seen before was quite remarkable. Of the permanent exhibits, I especially enjoyed Metropolis II, a sculpture of a city composed primarily of model train sets and cars, that when turned on and running has a completely different feel to it than when it’s stationary. Really cool.

Our last day we had lunch at the Farmer’s Market, which isn’t what it sounds like, but is actually a permanent market of food stalls in a semi-open-air environment. It was fun to wander around all the fancy food shops. We had crepes and then hit the road back north. We took the CA-1, Pacific Highway, back most of the way, then as it was getting dark, switched over to the 101. It’s a pretty nice drive since it’s quite variable and you can see the ocean for parts of it, but we hadn’t really allocated enough time (and it takes forever), so be cautious about attempting it if you have to be somewhere at a specific time.

There were many other places I wanted to visit, but didn’t have time to see: the Getty Museum; Santa Monica Pier; LAX Theme Building; to the northeast, the Hollywood sign, Ennis House, and Lovell House; and further away, the Crystal Cathedral and Gamble House. Lots to do on my next visit! If you’ve lived in LA, what else would you recommend? The Getty Villa? Other cool downtown buildings? In any event, I’m sure I’ll be back, if only to make my way to Disneyland, which I hear has an Indiana Jones ride that they don’t have at Disney World… Clearly I have my priorities in line!

For listings of cool historic buildings in Los Angeles, check out this helpful website, or the Los Angeles Conservancy, and if you want to learn more about urbanism and transit in the area, I recommend following Alyssa Walker. (Her website is appalling but if you follow it on your feed reader of choice, you don’t have to look at the garish background images.) LA may have a bad reputation as a city, especially to New Yorkers, and I think it deserves its car-dependent rep, but as a classically “American” place, it should be on everyone’s must-visit list. I’ll be back!