Last October we took our first “real” vacation ever, just the two of us. I had been hoping to visiting the Grand Canyon ever since I took “The Dynamic Earth” (aka “Rocks for Jocks”) in college, where the professor, Alex Glass, somehow convinced me that geology is awesome. Let me tell you, that man can make rocks interesting. (It helped that he included random Star Wars references in many of his lectures.) Anyway, being the supportive spouse that he is, Justin agreed to visit the Grand Canyon with me, we picked a time that seemed like it would have good weather with fewer crowds, and off we went.

Since I had never been to Las Vegas, we decided to start there, spend a day and a night, then spend four days completing the “Grand Circle,” a 700 mile, 12 hour drive around the canyon. On our way we passed through three states, several Native American reservations, and multiple state and national parks, finally ending back in Vegas for our flight home.

As a dutiful student of architectural history, of course I have read Learning from Las Vegas, that seminal work of postmodern architectural writing. The book dissects and ultimately approves of the “American vernacular” of neon signs, car-scale design, and the “decorated shed,” the utilitarian building with applied ornament. Written in the 1960s-70s by Robert Venturi, Denise Scott Brown, and Steven Izenour, the book is an illustrated foray into the heart of what is now the old Las Vegas strip, before the mega-malls and glass towers came to town. If you’re still trying to figure out what happened to Modernism, I suggest you read this book. In any event, on our visit I hoped to find at least a piece of what Venturi & Scott Brown saw on their pilgrimages to Sin City with their Yale architecture students of yore, and so we found ourselves at the Neon Museum. This was one of the glowing highlights of our time in Las Vegas, together with a truly wonderful barbeque restaurant under a highway overpass. We took the night tour, when the enormous neon signs are illuminated (mostly from the outside, although a few restored ones are self-illuminated), and one can more easily imagine the feeling of years gone by. 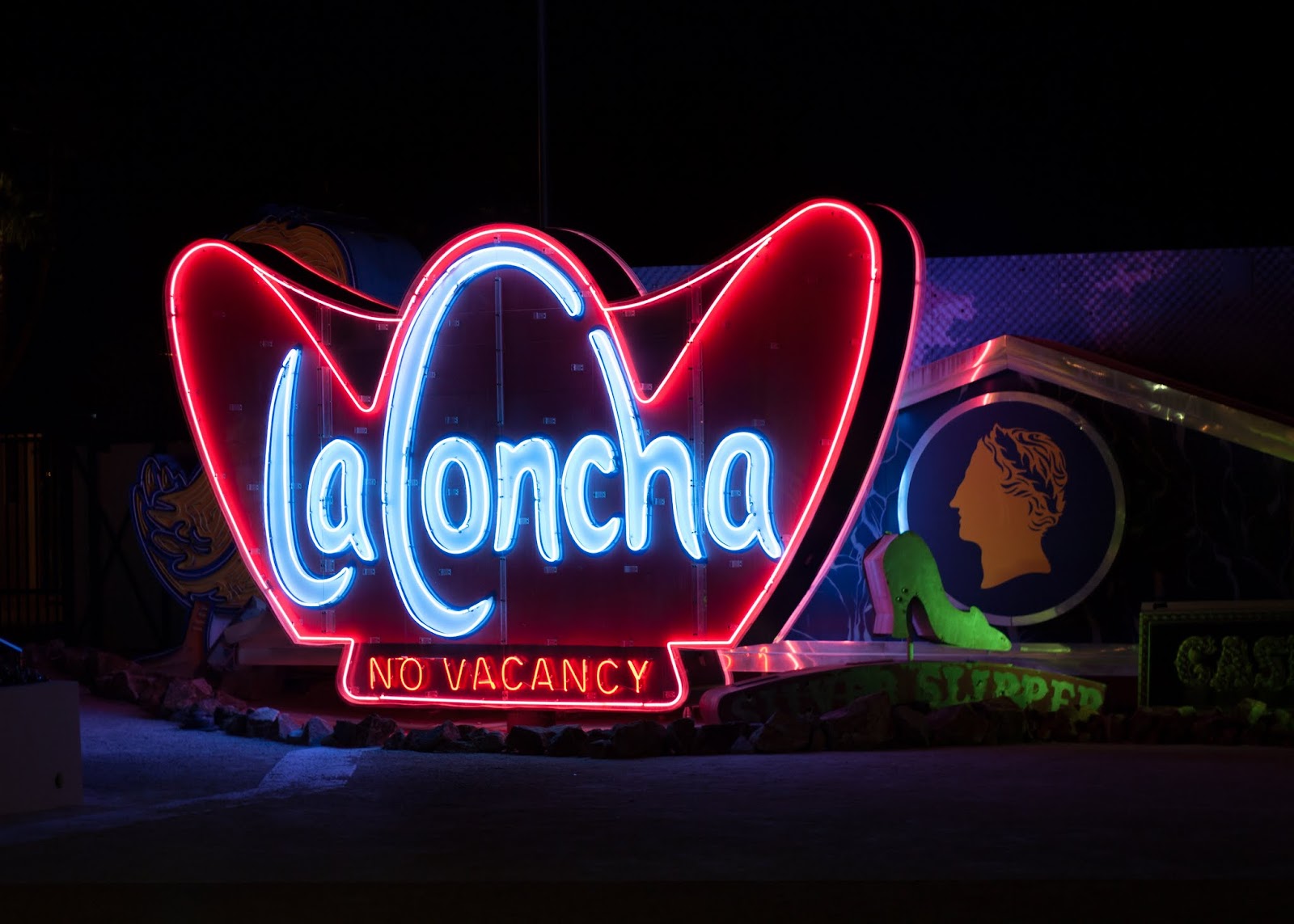 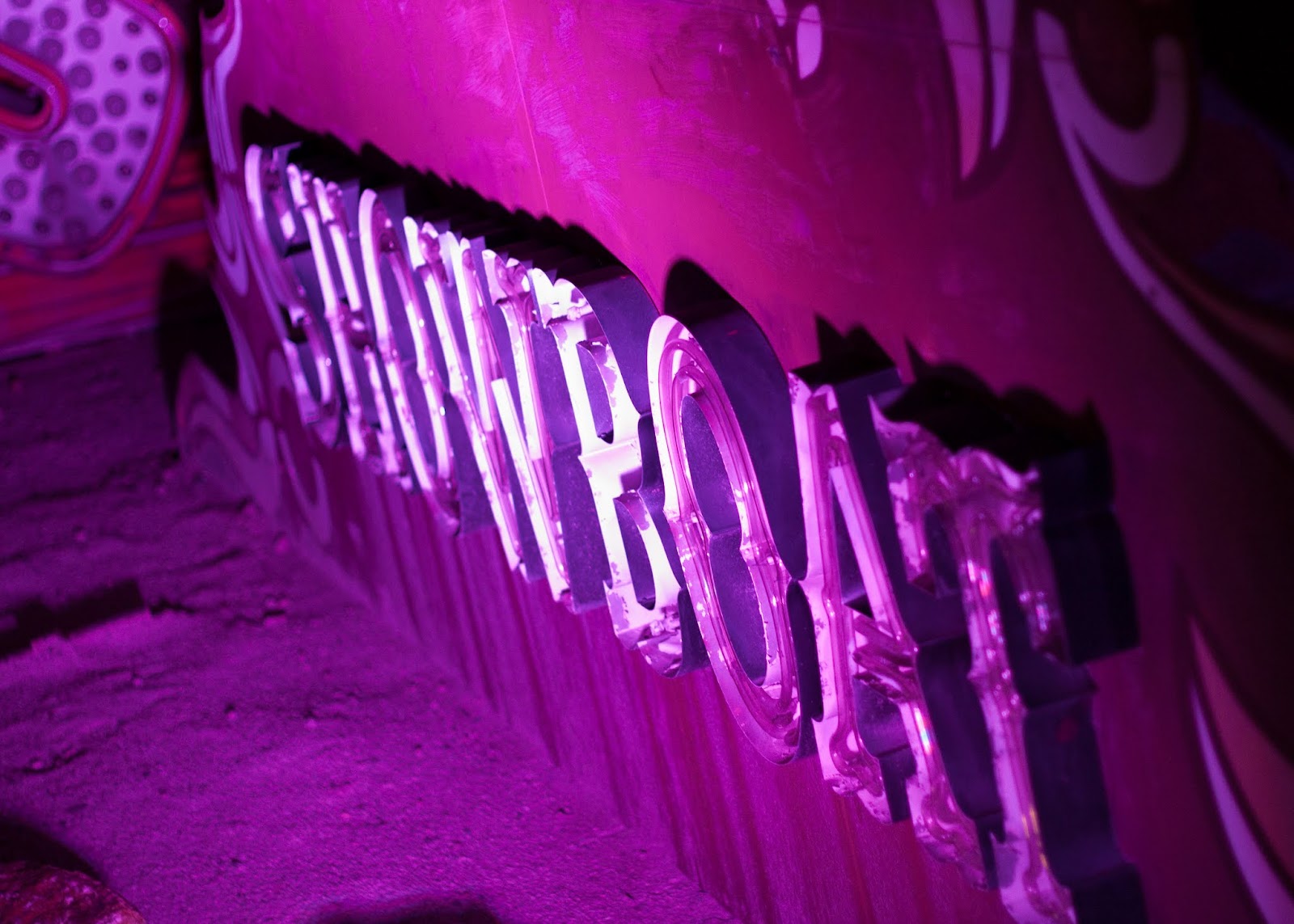 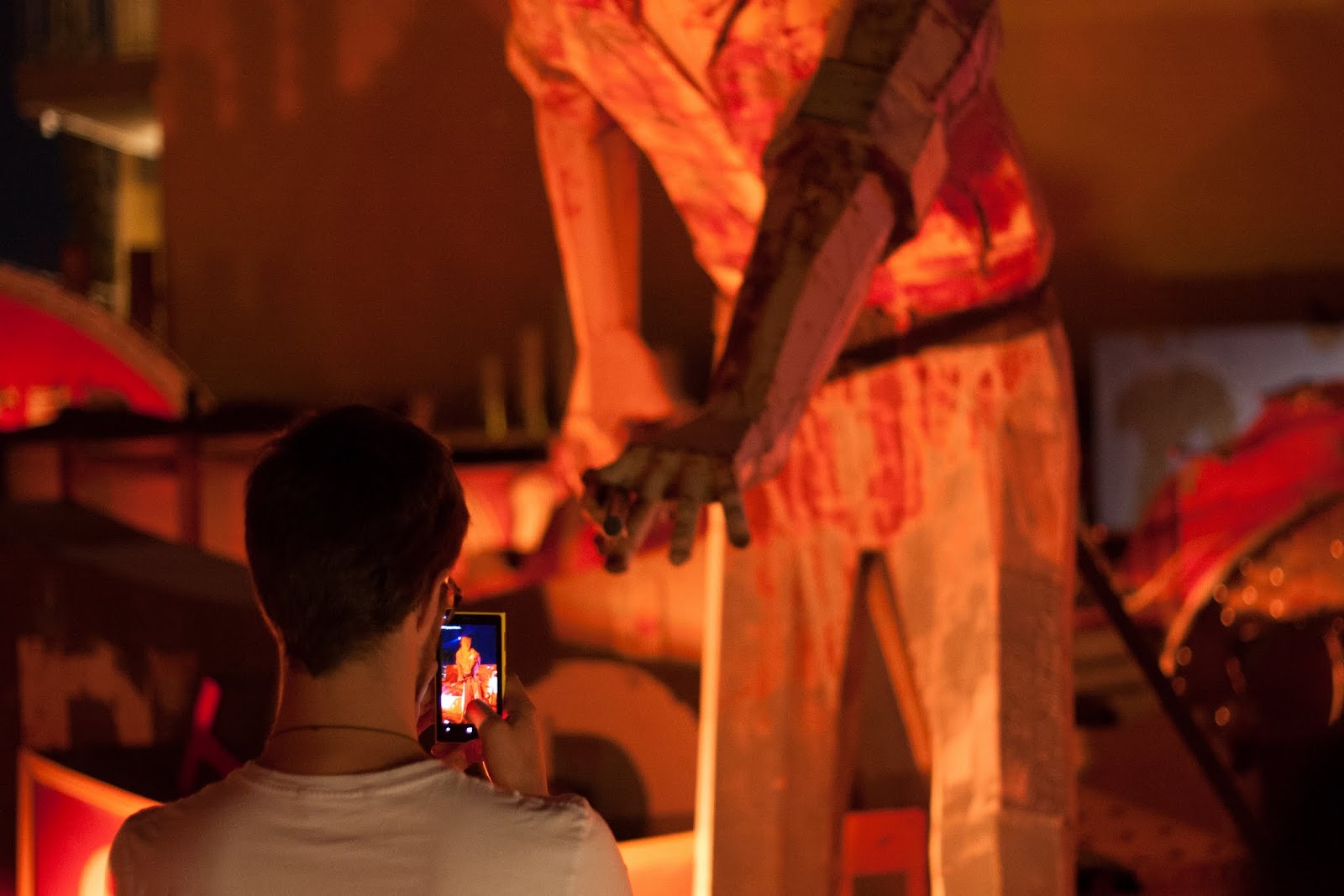 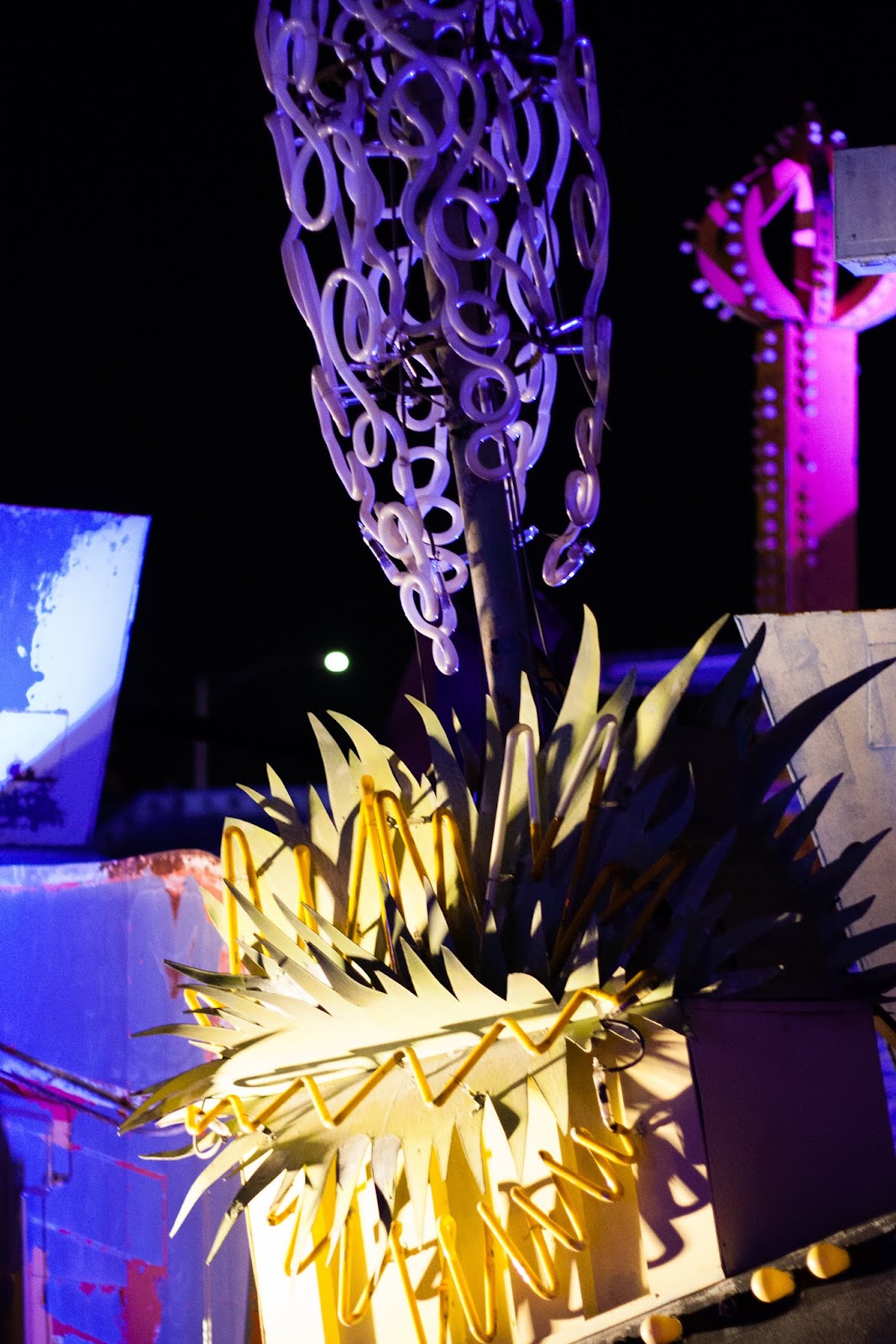 The museum gift shop / visitor’s center is housed inside a repurposed and relocated motel lobby, which is itself fun to see. I recommend it. The rest of our time in Las Vegas was spent at the pretty terrible National Atomic Testing Museum (an exhibit on Area 51 involving fake science on aliens? give me a break) and trying to sleep despite extremely loud amplified sound until past 2am at the Downtown Grand Hotel. Don’t stay there. 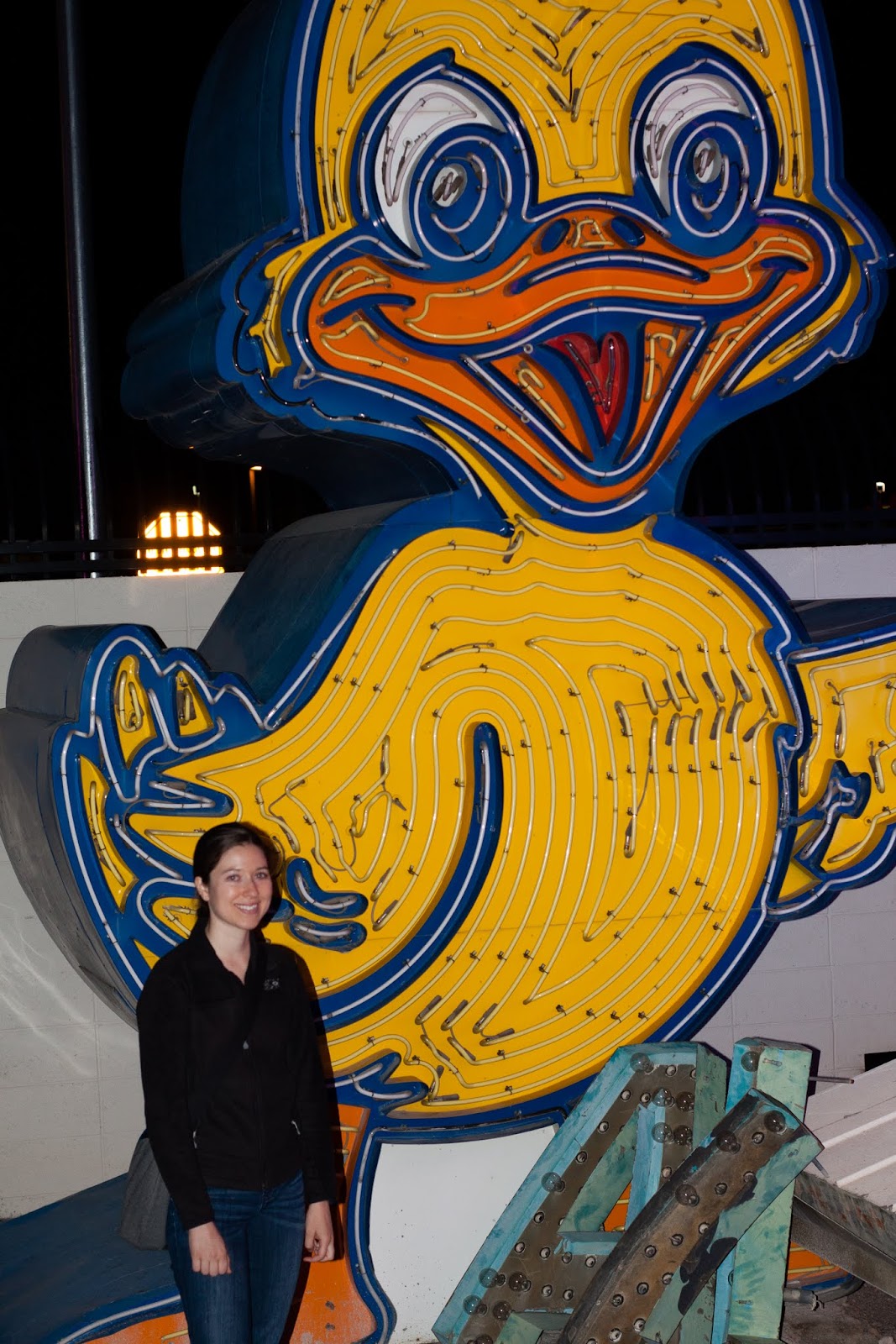 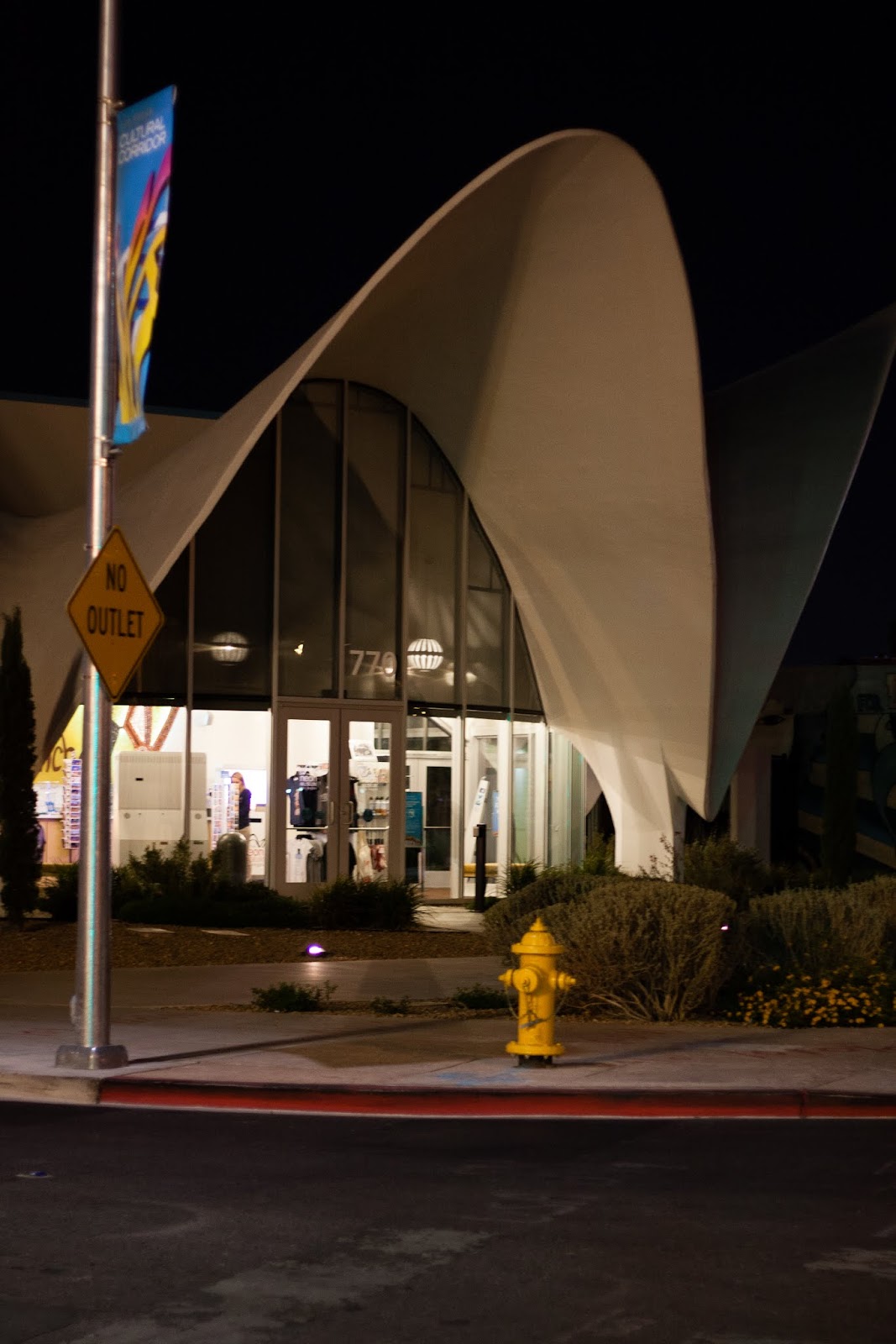 Having survived our 18 hours or so in Las Vegas, we headed out of town as quickly as possible to see the very big things on our itinerary. Our first stop: the Hoover Dam. We can confirm that it is, indeed, very big. We went on the Dam Tour, which takes you both to the power station at the base on the dam and inside the dam itself; if you have the time, I definitely recommend doing that over just the power plant tour. Our guide showed us a tiny vent on the outside face of the dam, then took us there where we could look out, back at the point where we began. It was an incredible view, and was amazing to think of what was accomplished in the 1930s with a whole lot of cheap labor and reinforced concrete. 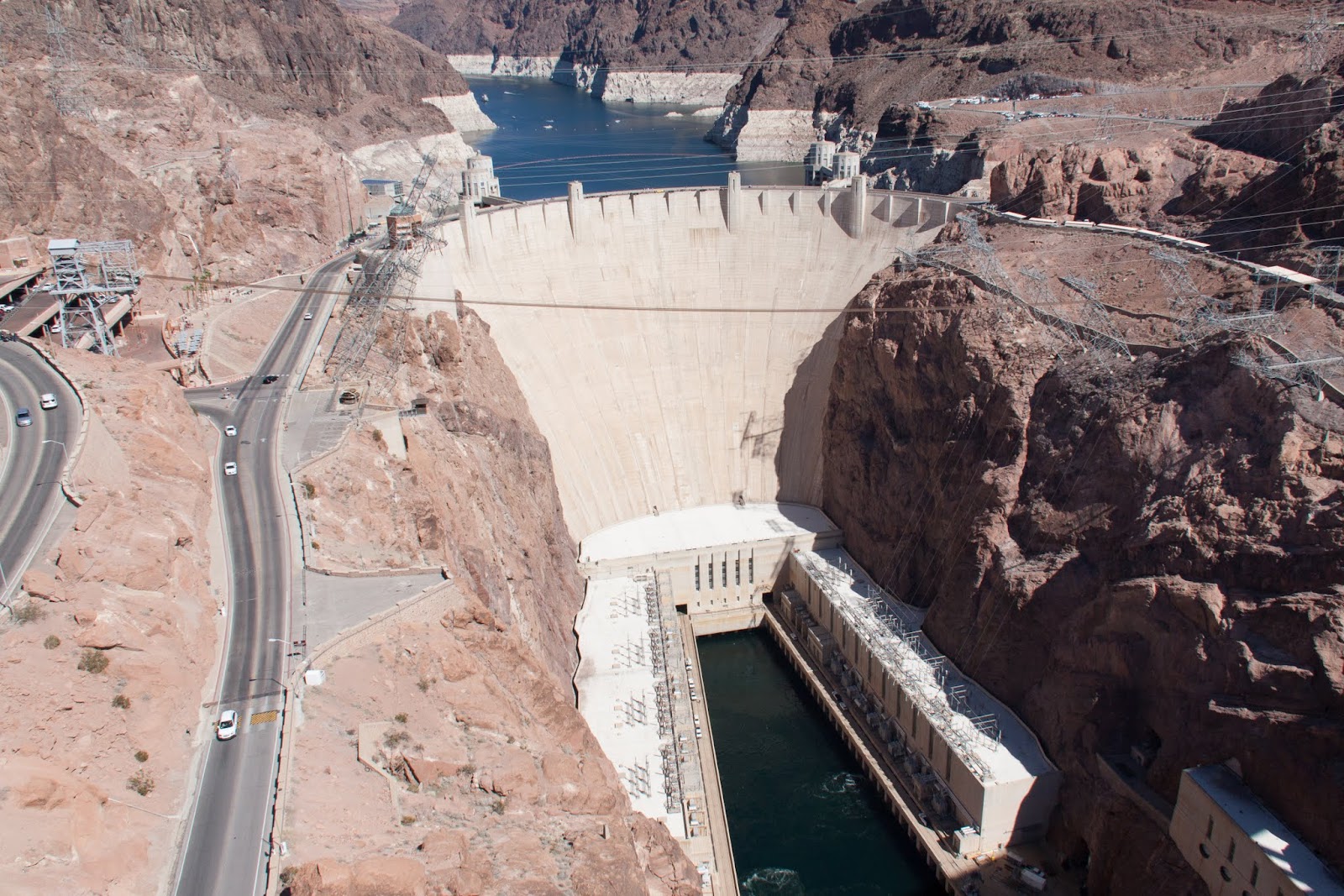 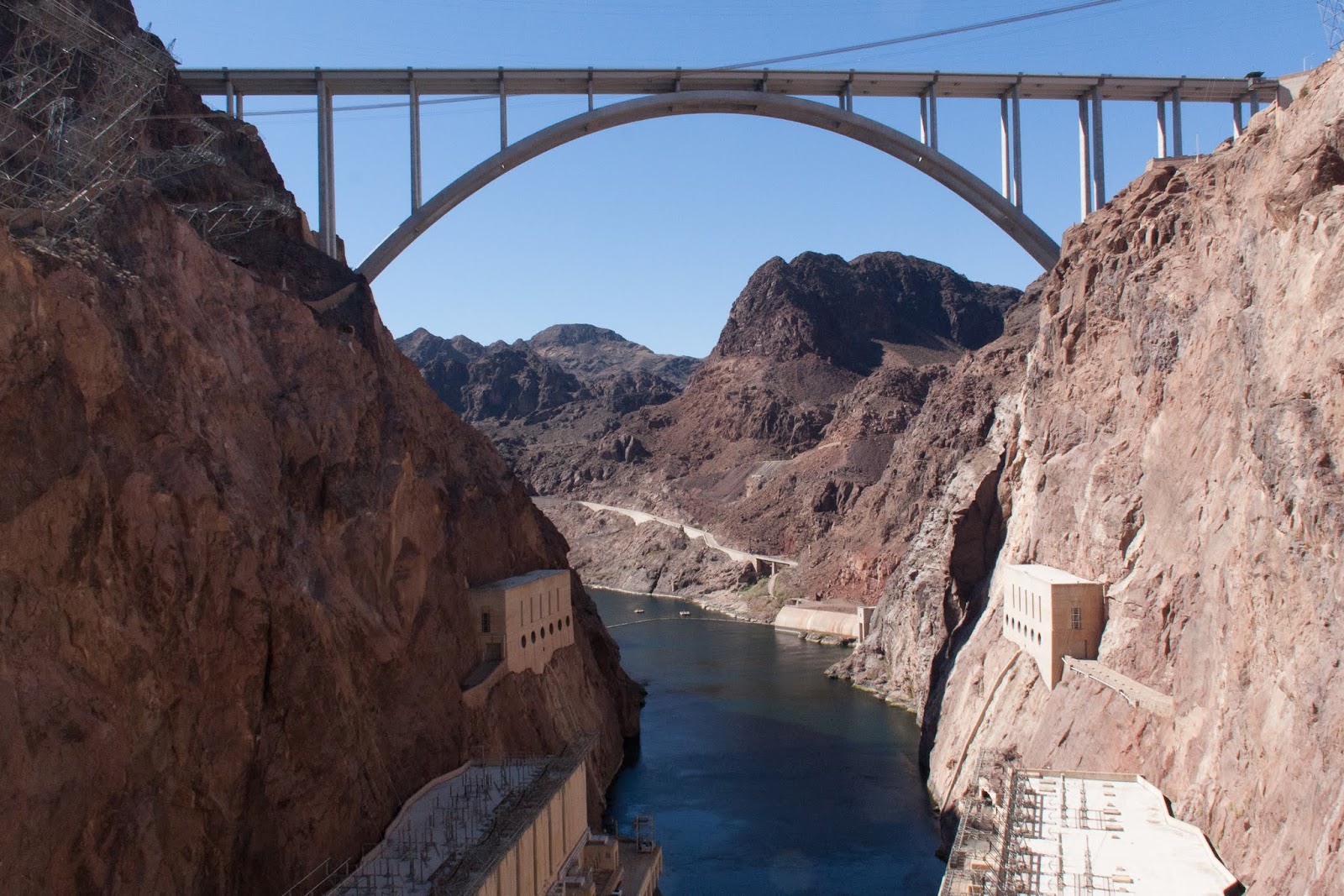 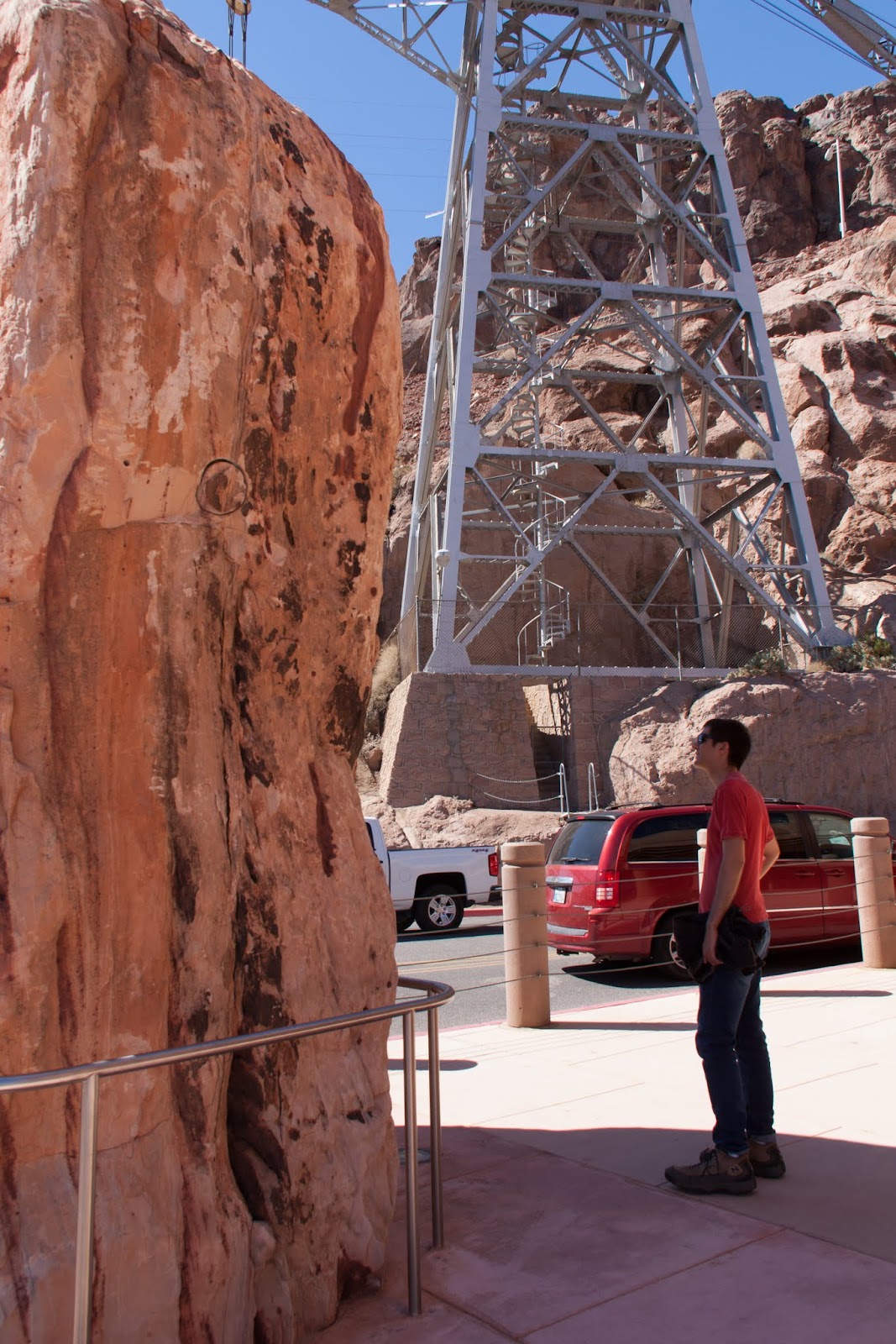 Until recently, the highway actually passed across the top of the dam, which as you can imagine, was a safety risk. Now there’s a quite nice bridge downstream of the dam that carries the highway traffice and has a pedestrian overlook. If you’re interested in learning more about the dam, check out: this website from the National Park Service and this one from the Land Reclamation Bureau, which built the dam. I was surprised to learn that flood control was one of the stated primary objectives of the dam, rather than simply for energy production. Apparently catastrophic flooding was common before the whole series of dams was built that now controls the Colorado River. 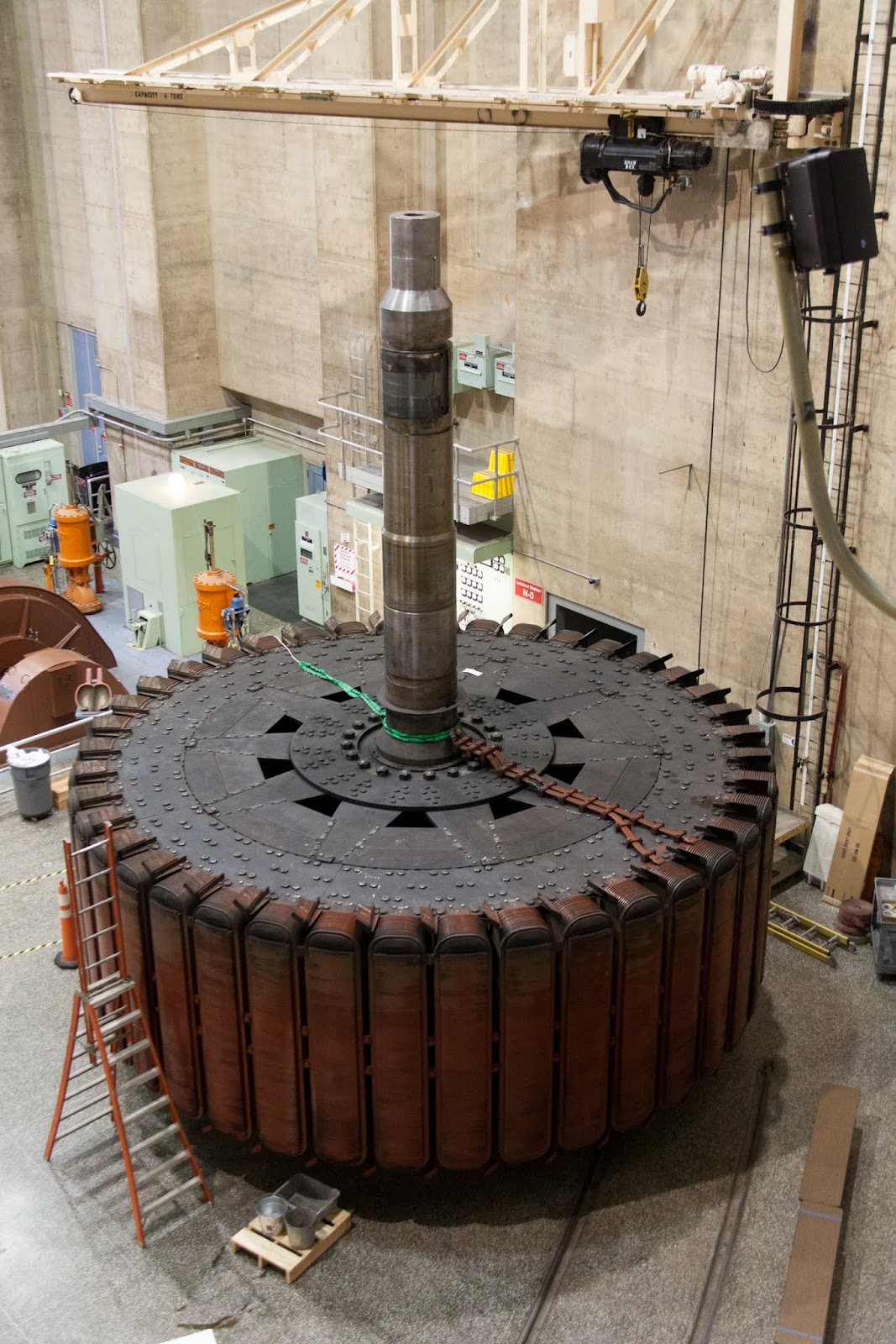 Leaving the Hoover Dam, we continued southeast until we reached I-40, then headed east, parallel with the Grand Canyon. When we reached the 64, we headed north. Before the end of the day, we made it to the South Rim Visitor's Center, Grand Canyon National Park.

To be continued in Part 2.