By late afternoon on Friday, October 3rd, we’d reached the Grand Canyon Village on the South Rim. We checked in to the Yavapai Lodge, where we were staying, and headed over to the canyon rim to see what we could see. The view was lovely; we managed to arrive just about at sunset. We walked along the rim in the village area, looked into the El Tovar - the oldest hotel on the property - and had dinner at the Bright Angel Restaurant. Then it was time for bed in preparation for our hike the next day. 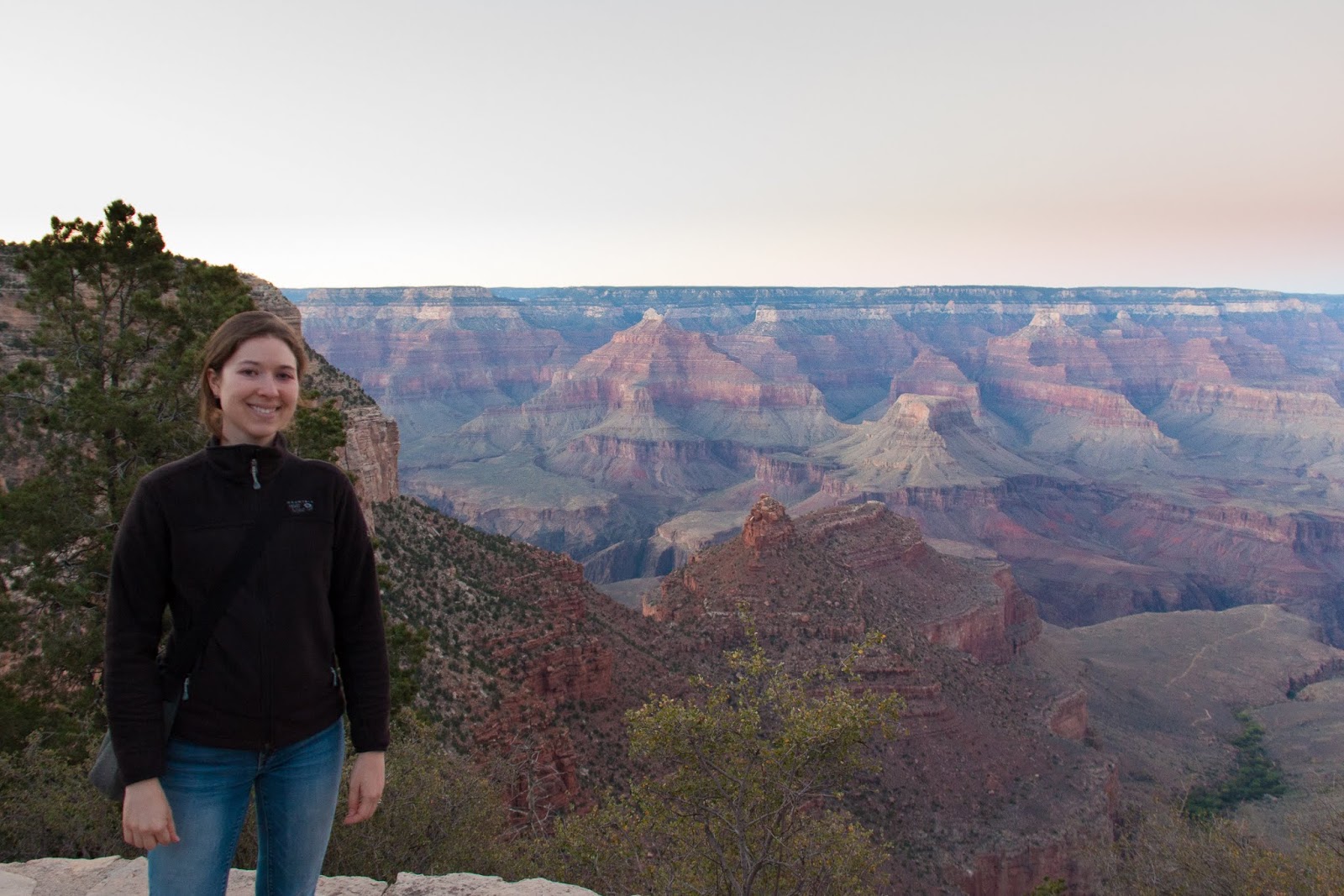 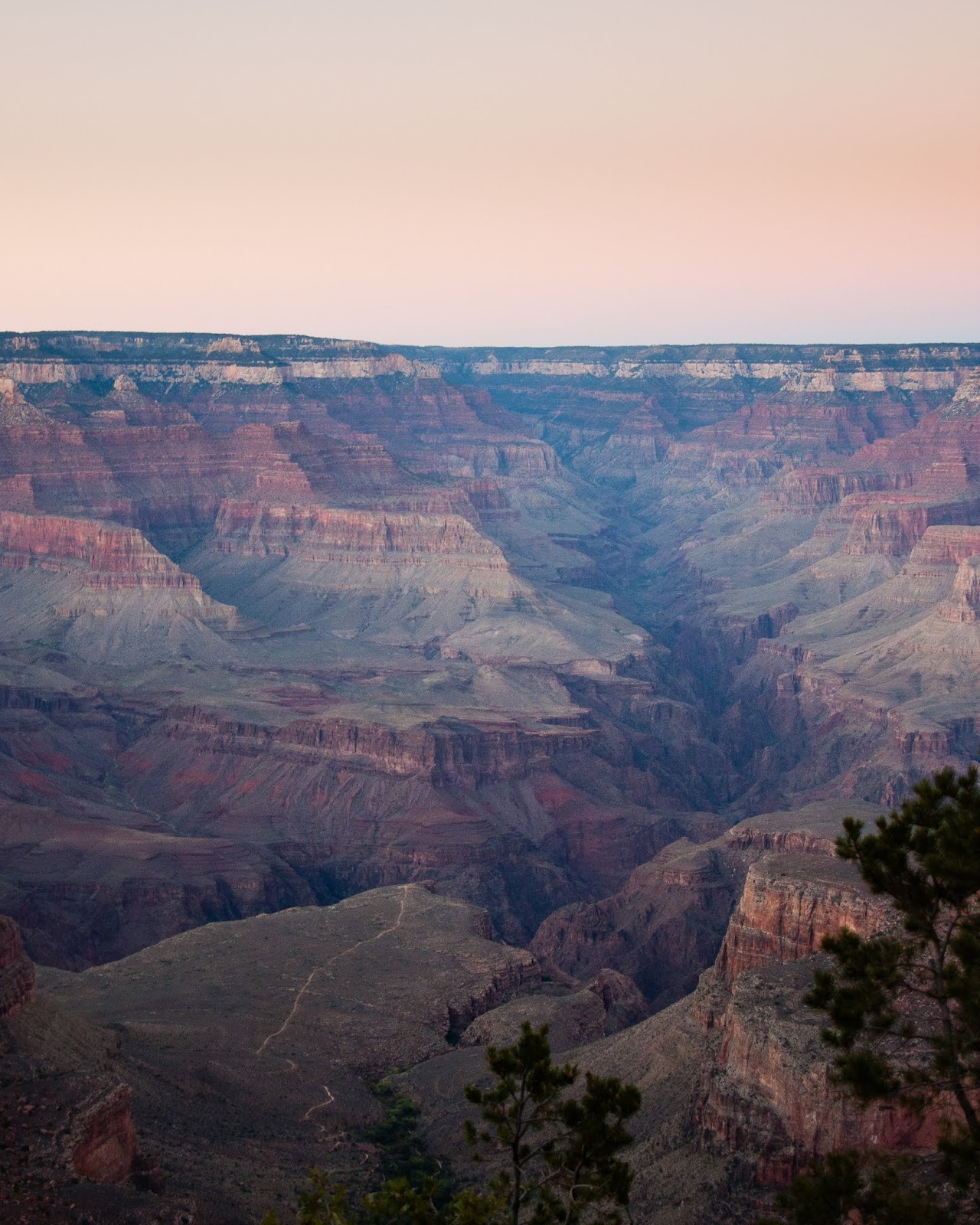 If you know us, you know we are not morning people. So on Saturday, we did the best we could, and managed to get out of the hotel, eat breakfast, gather some snacks, and get on the bus to the trailhead by around 10am. In the parking lot we saw a huge elk wandering around, so be on the lookout for nature everywhere! For our hike, we took the Bright Angel Trail, which starts right in the village. And then it was a long walk down the side of the canyon, fortunately mostly in shade and at the perfect temperature. Most of the way down, we walked along with a group composed of a woman with her 80-year-old father and a guide. We made it our goal to go farther than this adventurous gentleman. We arrived at the first rest station, the 1.5 Mile Resthouse, around lunchtime and had our lunch. The other group turned around at that point, and we decided to head back as well rather than continue on, since we had a schedule to meet; we may not have made it further, but at least we made it as far as they did! We were back up to the top around 2 or 3pm, and at the same time, there were crazy people returning from having hiked to the river and back that same morning. Apparently this is something people train for, like running a marathon, and come back to do annually. Matching t-shirts seem to be part of the draw. After resting a bit, we then walked along the Rim Trail for some great views back toward the village. 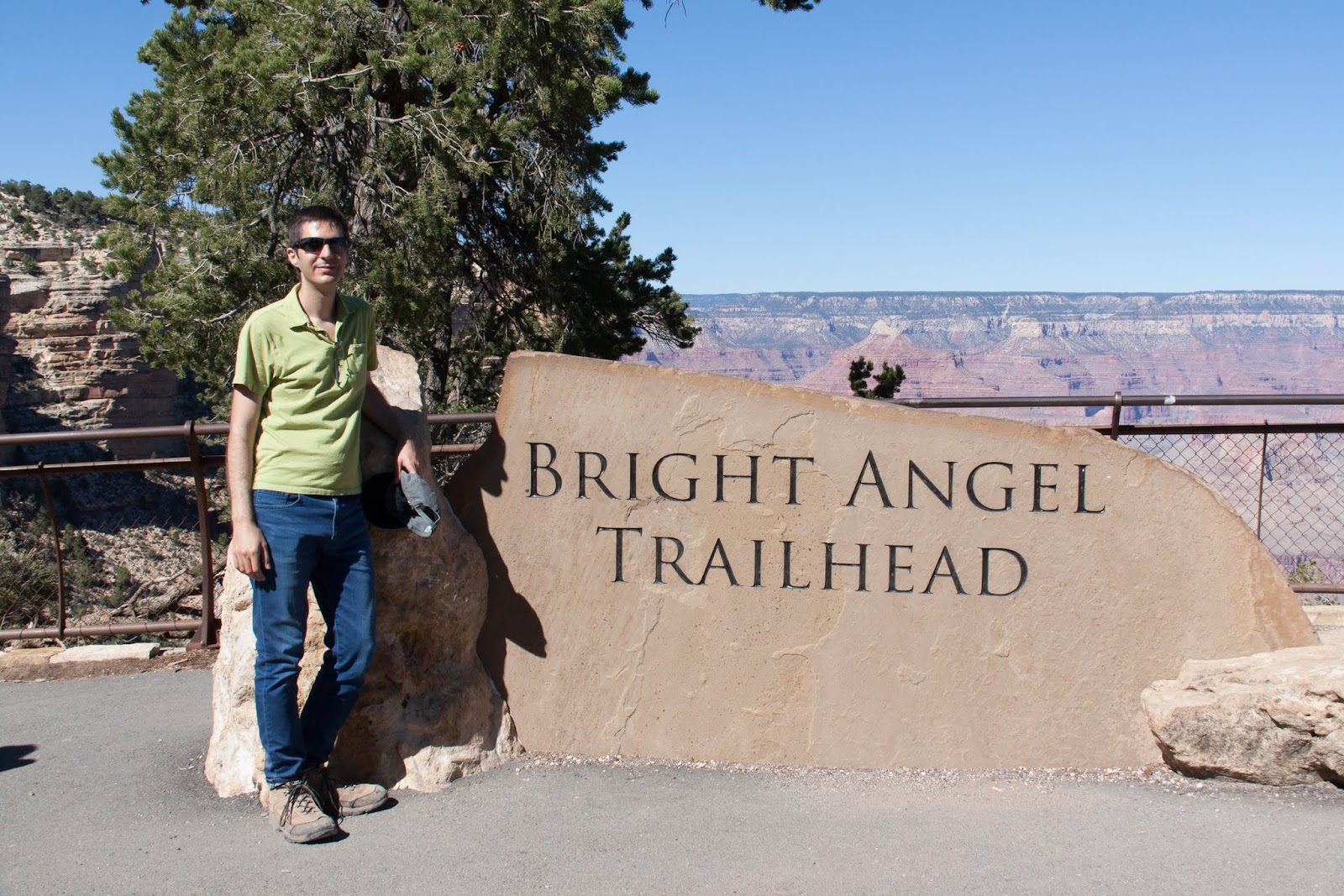 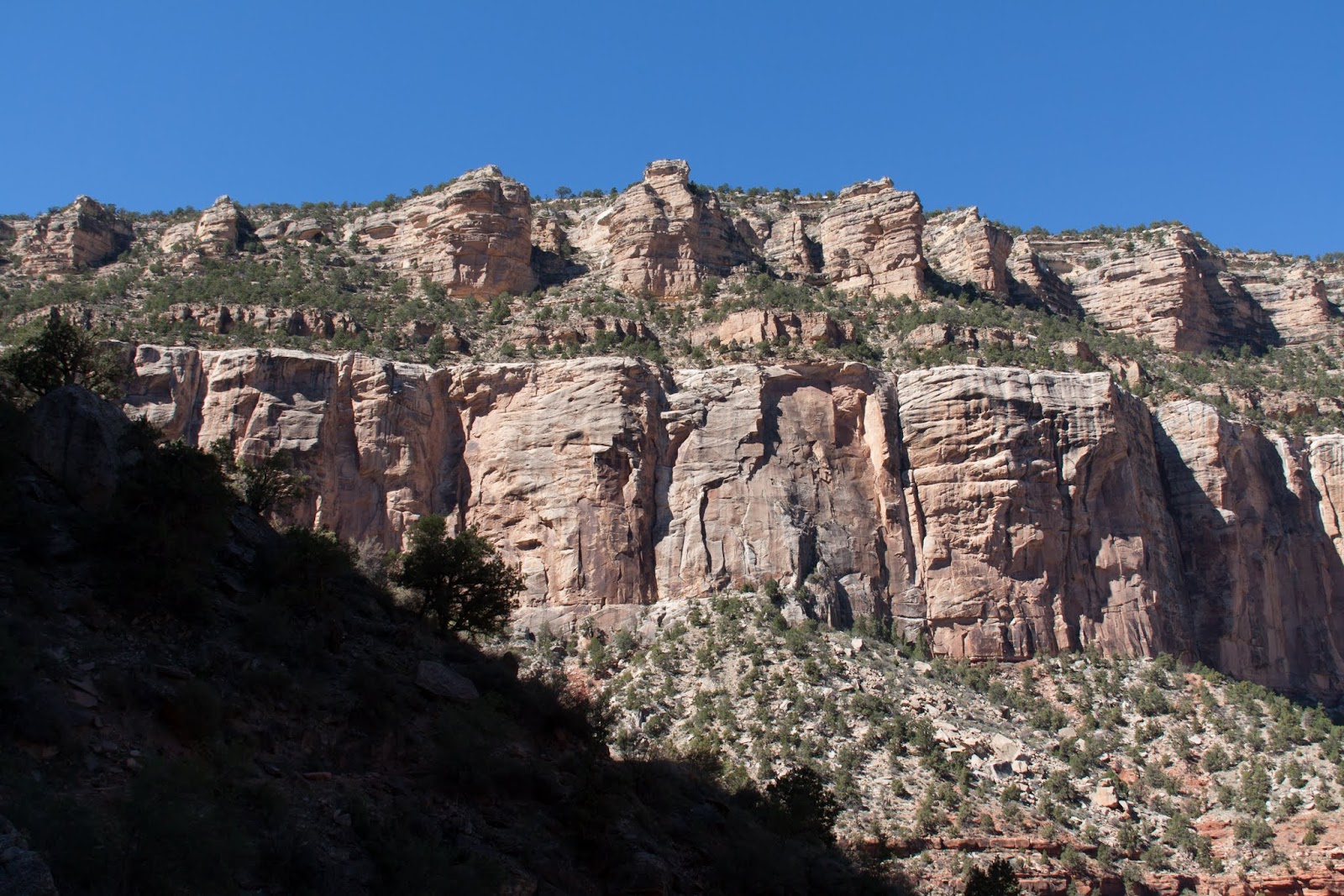 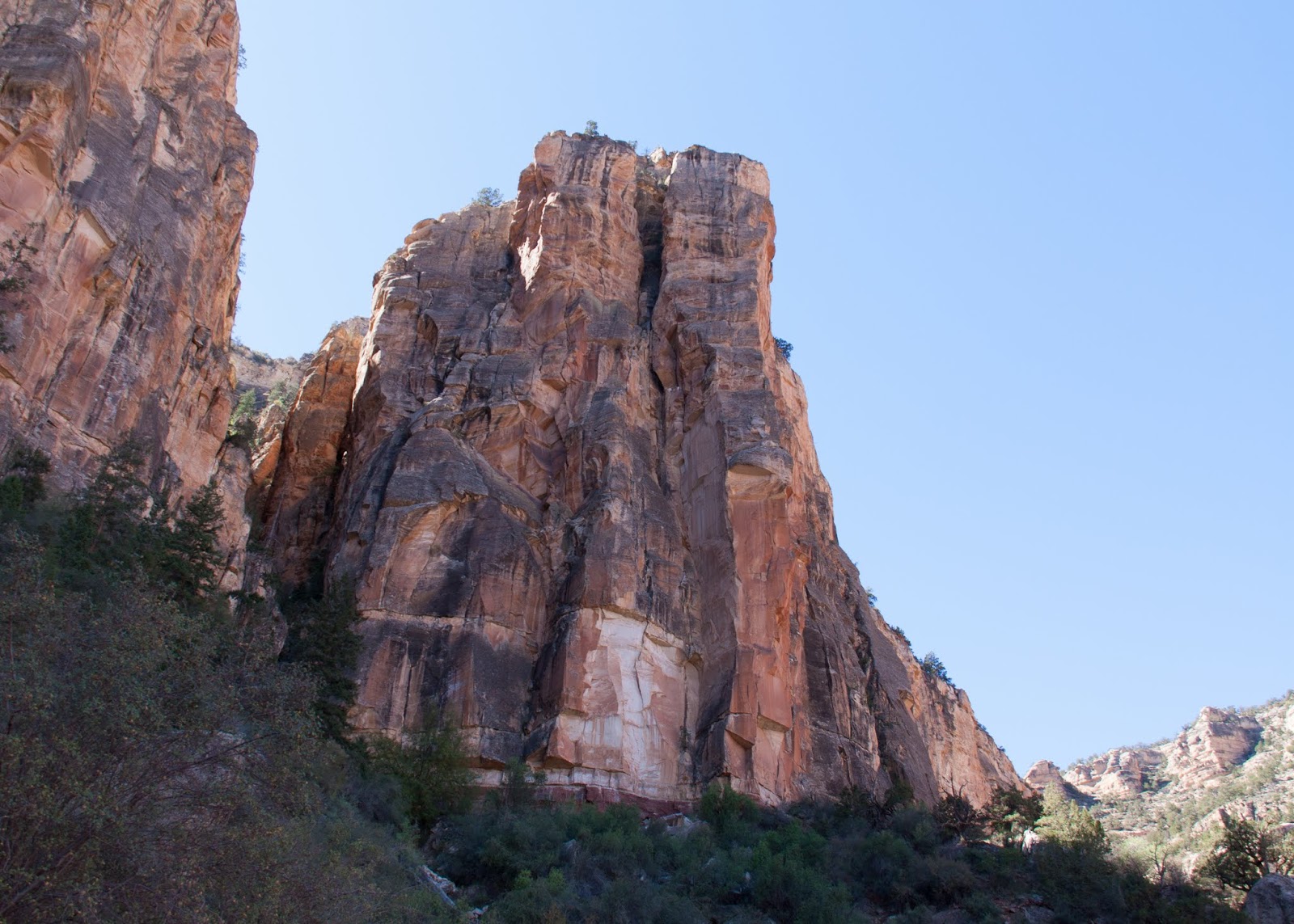 The canyon is so massive that it’s hard to get a good sense of it. It hardly feels like a discrete feature, in the way that a mountain or a rock formation does; it’s an entire landscape. At the top, you can’t see the river, and I don’t think we saw it at all on our hike. What’s really amazing is to consider that the river carved this entire landscape over time (with some help from erosion and uplift). It would be great to be able to do the whole hike down to the river, but there’s no way I could get back up the same day, and I’m not much for camping… so it’s probably not something I’ll ever do. I’m still glad that I got to see this natural wonder. 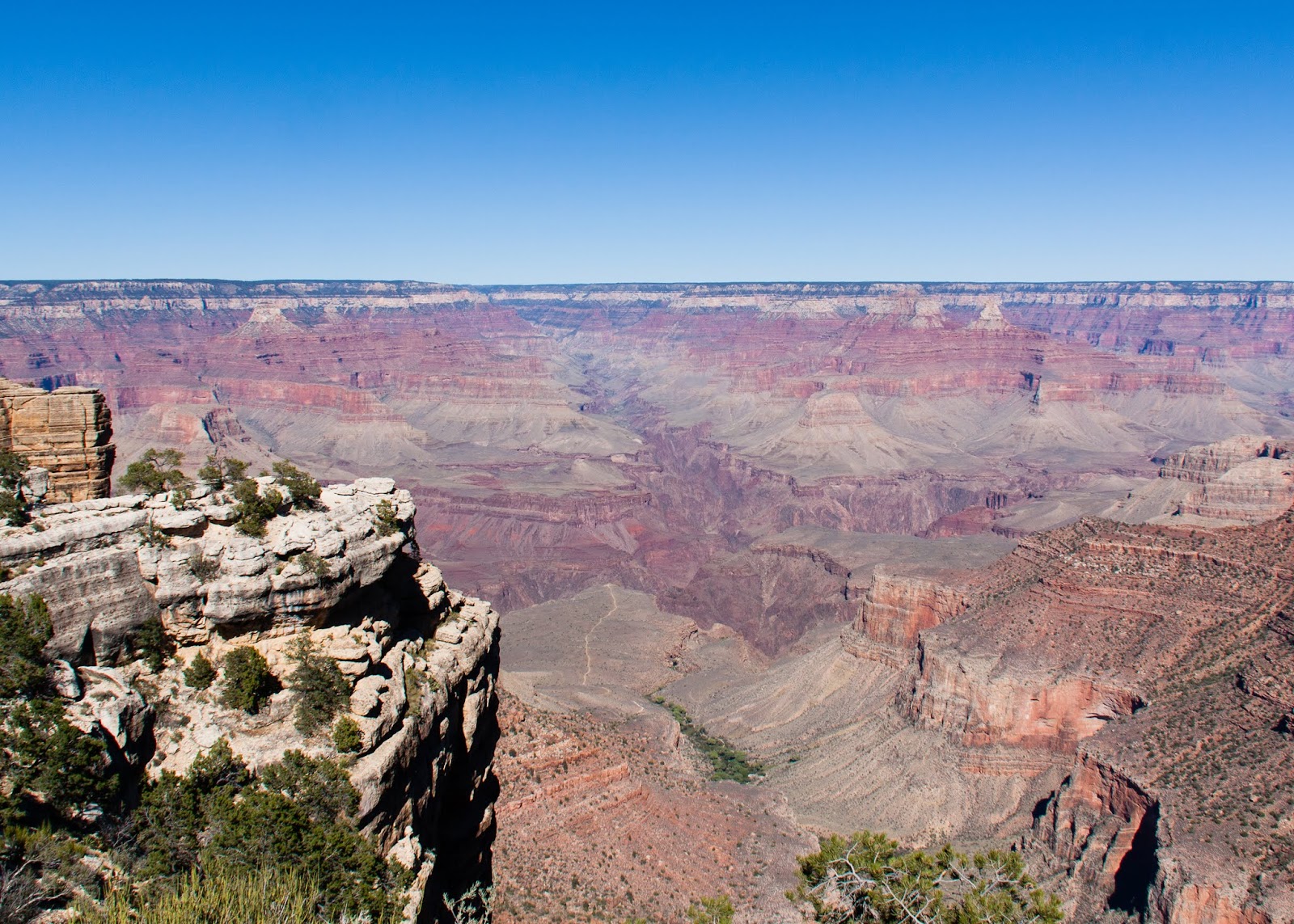 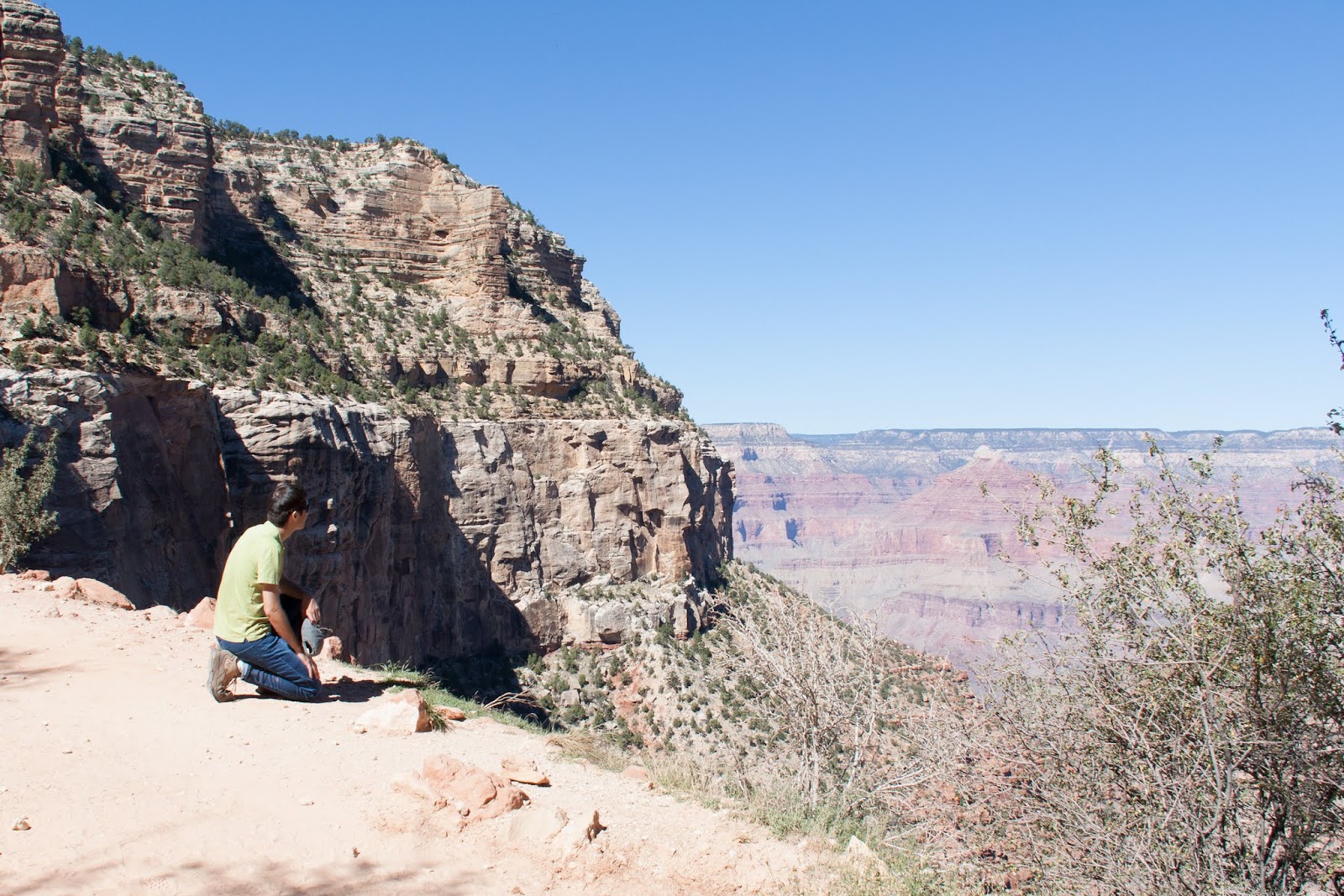 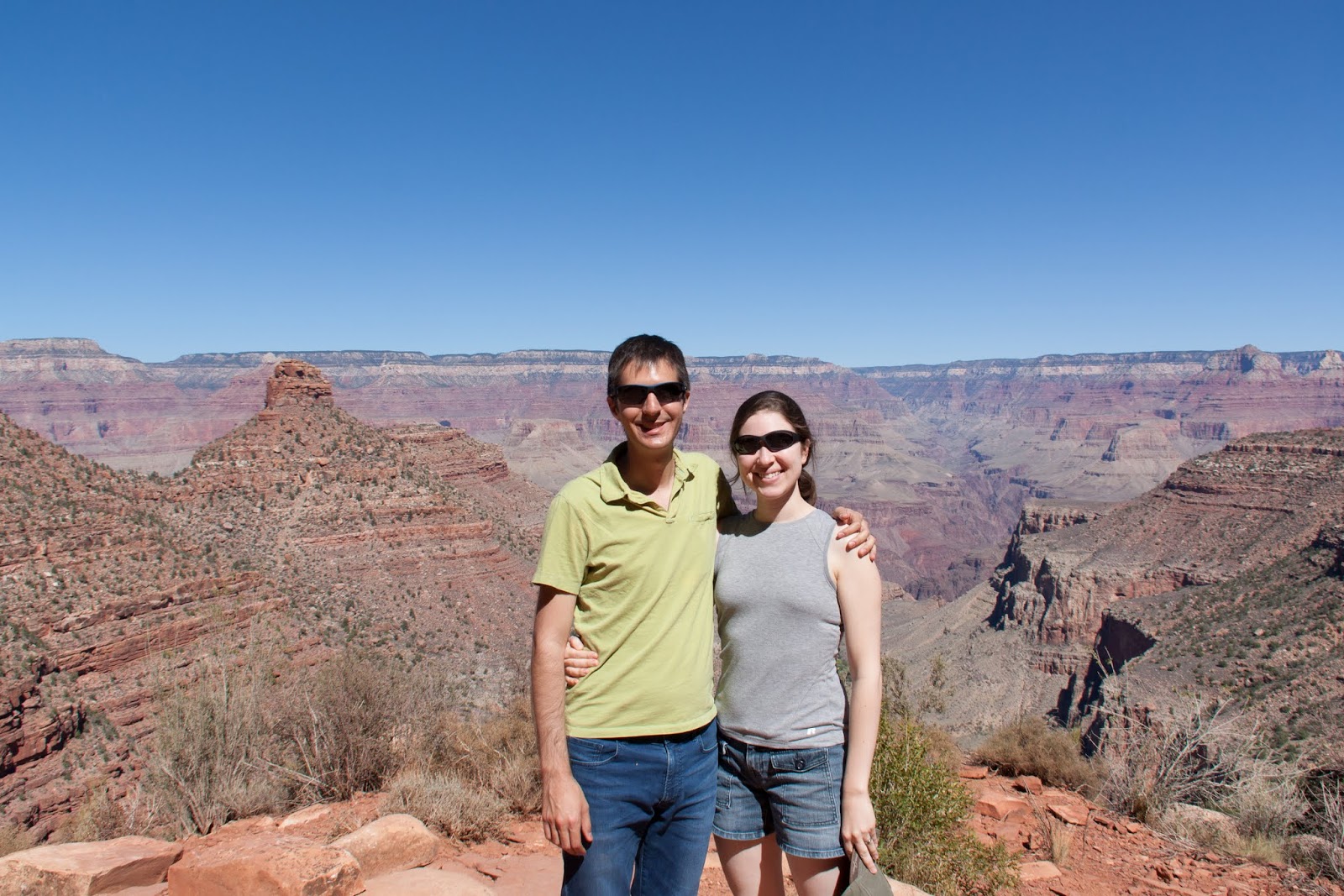 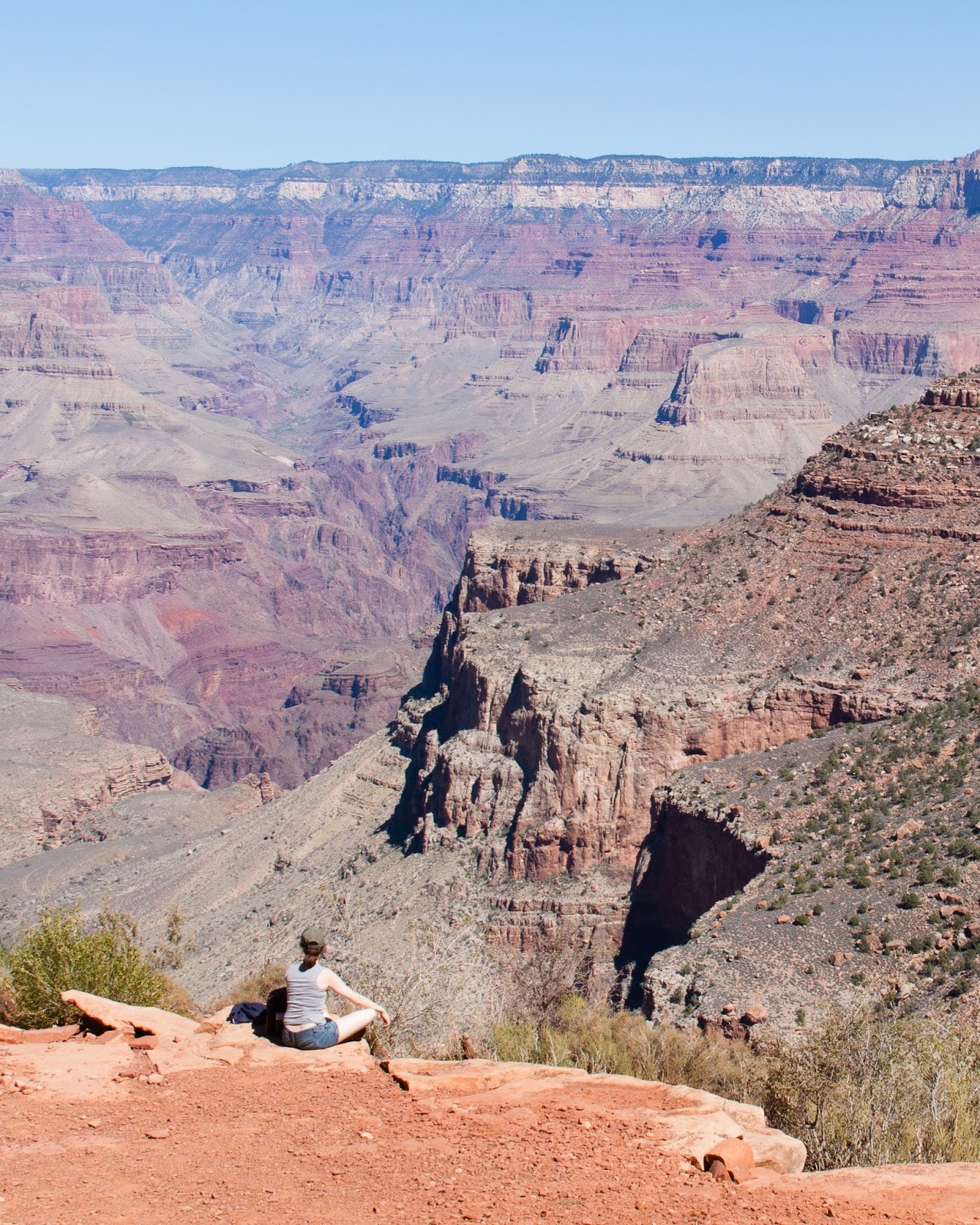 After the hike we were pretty tired, but not too bad, and ready to continue on. If I went back, I’d probably want to start earlier and try to make it to the 3 Mile point. We had such a packed schedule on this trip that there just wasn’t time to do more, but I think we got a pretty good idea of what the canyon is like.

Our next destination: Page, Arizona, where we would visit a slot canyon and actually touch the Colorado River. On the way there, we stopped at the Desert View Watchtower, from which we could actually glimpse the river at the bottom of the canyon. The Watchtower was built in 1932 by architect Mary Colter, modeled after Native American watchtowers of the region, but much taller (about 70 feet tall). The views from the top were carefully planned, and are indeed impressive. Finally, we could see the river! 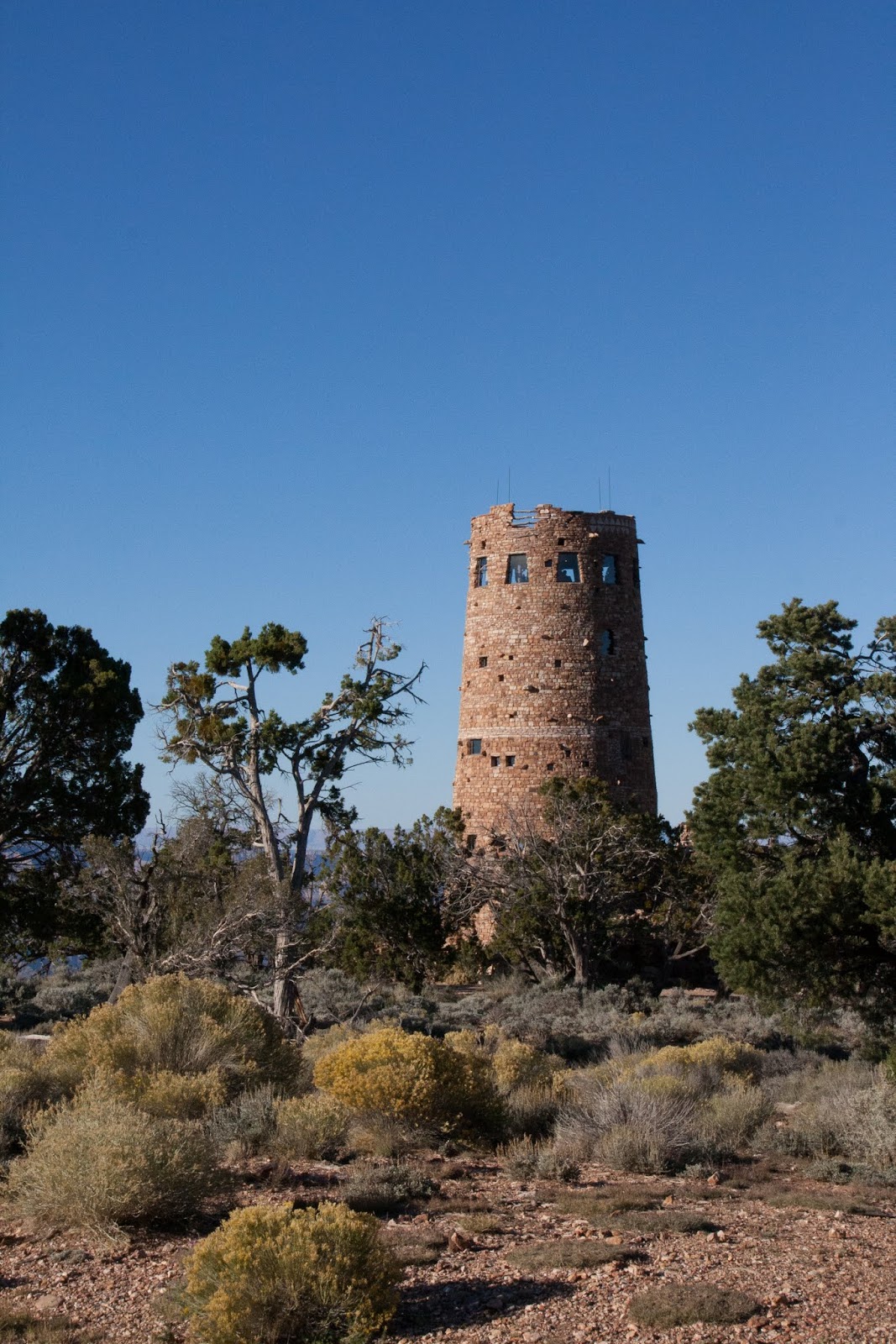 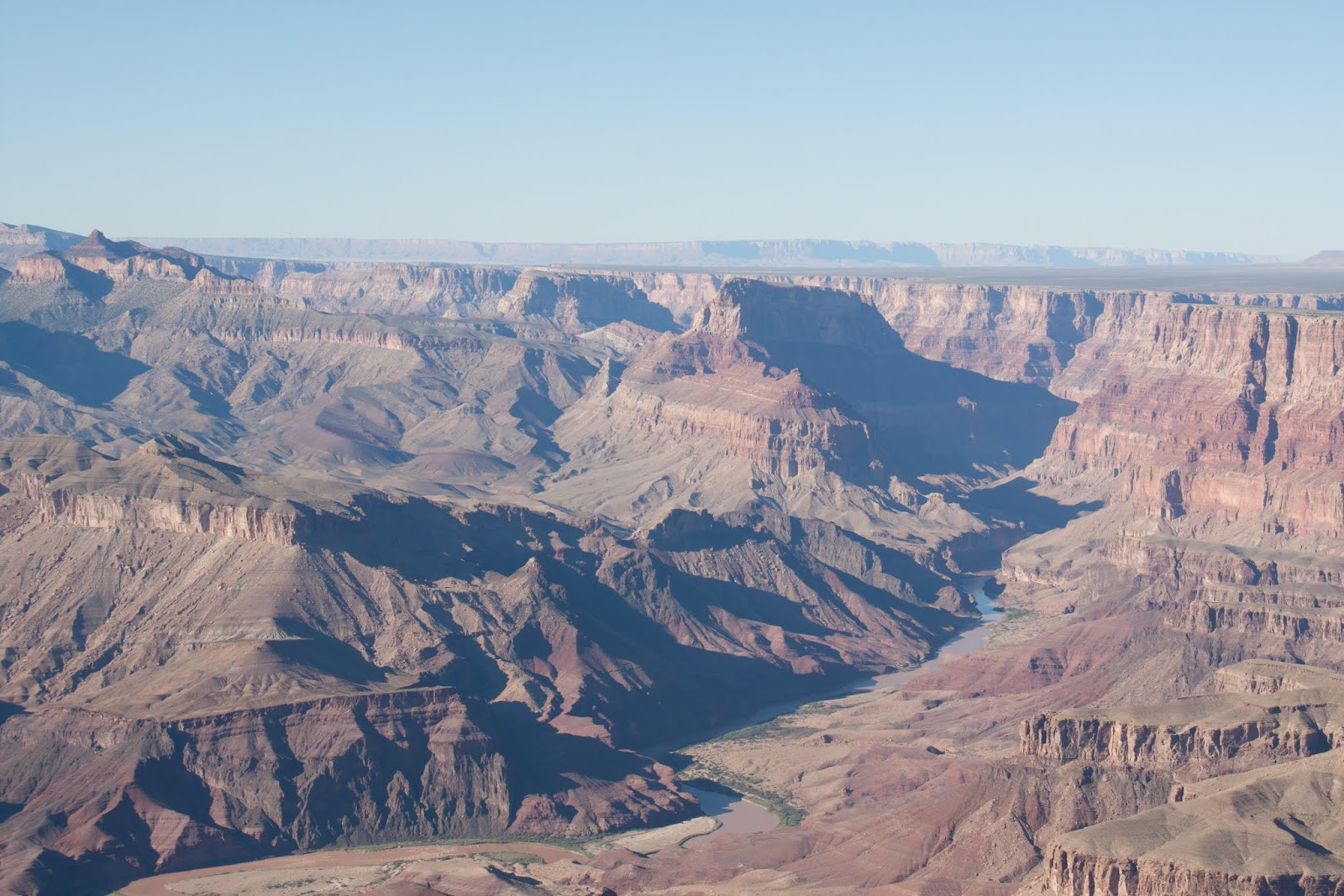 After this stop, we kept driving until we arrived in Page, and then across the Utah border to Dreamkatcher B&B, where we would spend two nights. This was the nicest accommodation of our trip, and I would definitely recommend it! Eric & Jarod were wonderful hosts and their breakfasts were amazing, which is saying something since I’m not a big fan of breakfast in general. We didn’t get to try out the rooftop hot tub, but compared to staying anywhere in Page, I think this was the clear winner.

After checking in, we checked out Big John’s BBQ in Page for dinner, which was mediocre, as was all the food we had in Page. But we weren’t there for the food, and what we did find was pretty spectacular.