Early on October 5th we got up, had a delicious breakfast at the B&B, and drove back in to Page to the Colorado River Discovery headquarters for the first half of our two-part all-day adventure: a Hummer ride to a slot canyon followed by a boat trip on the river. The slot canyon tour was only four of us, plus the guide, who, after learning we were all from Northern California and Washington, spent half the time apologizing for the fact that we had to take a Hummer (there was a lot of off-roading and steep drops, and he demonstrated the full capacity of the vehicle in the process). He used the other half of the time to point out where to take the best photos of the canyon, and what camera settings to use. Apparently taking photos of the canyon is considered the primary reason to visit! He also showed us the different types of native plants, which are surprisingly varied and interesting. 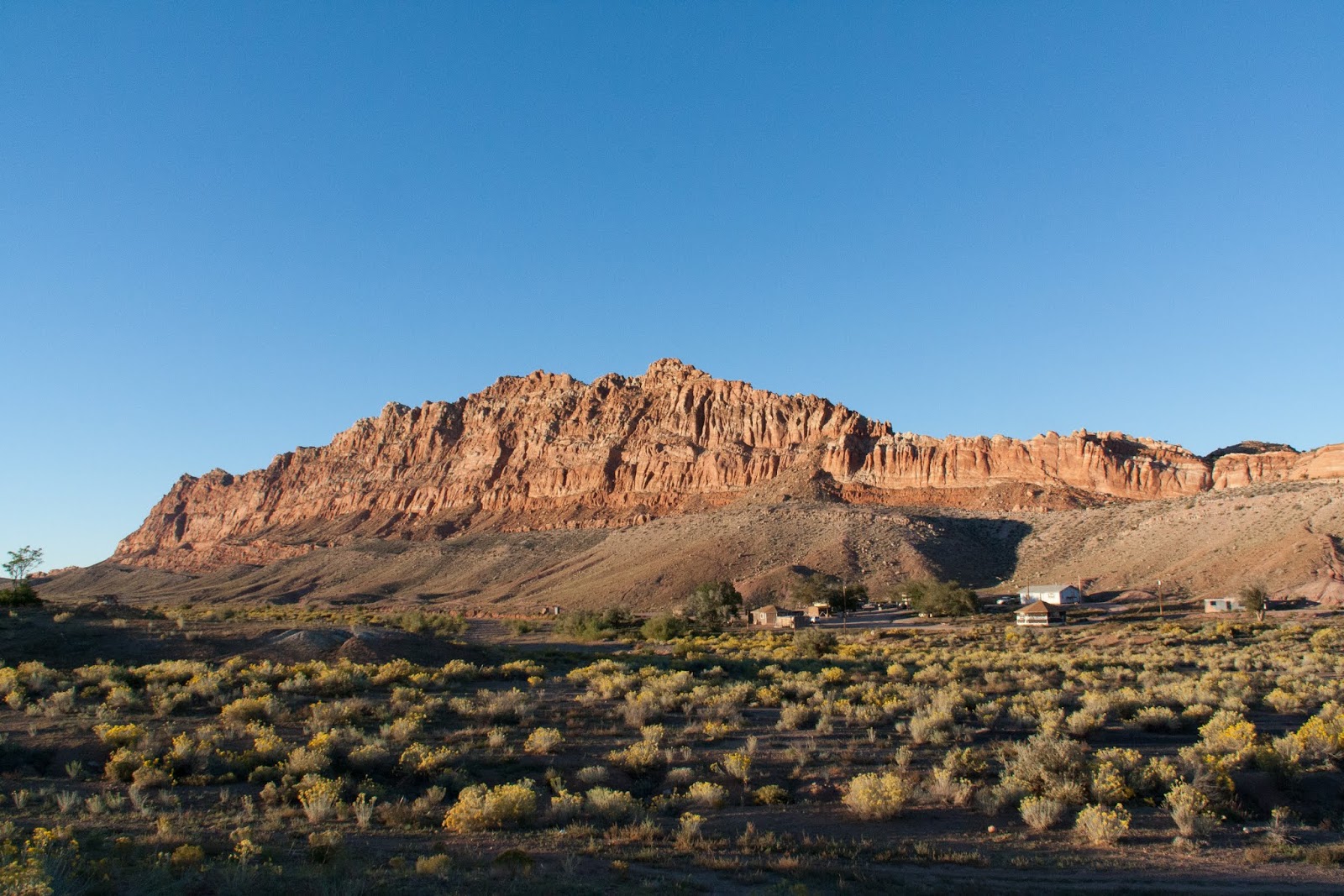 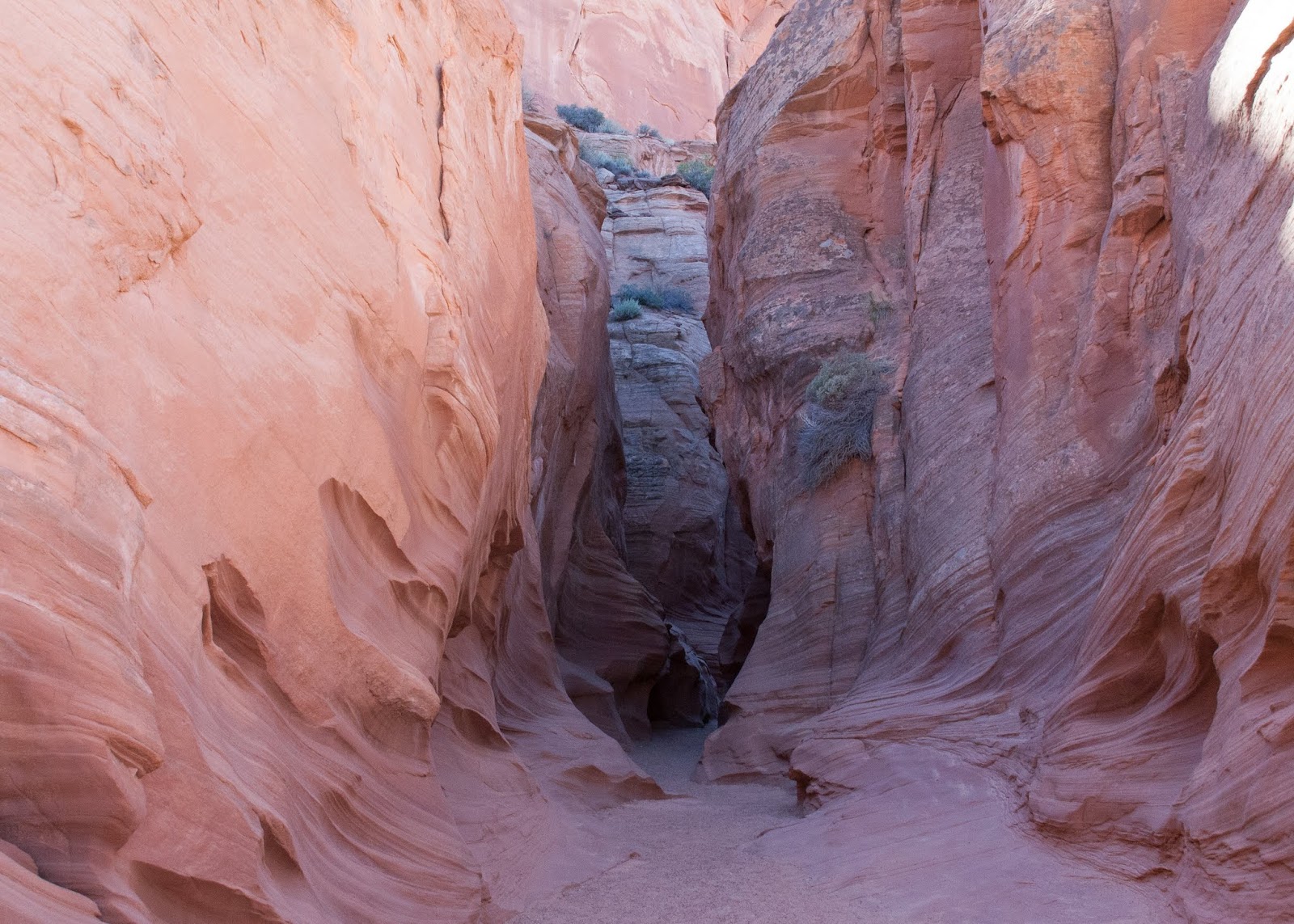 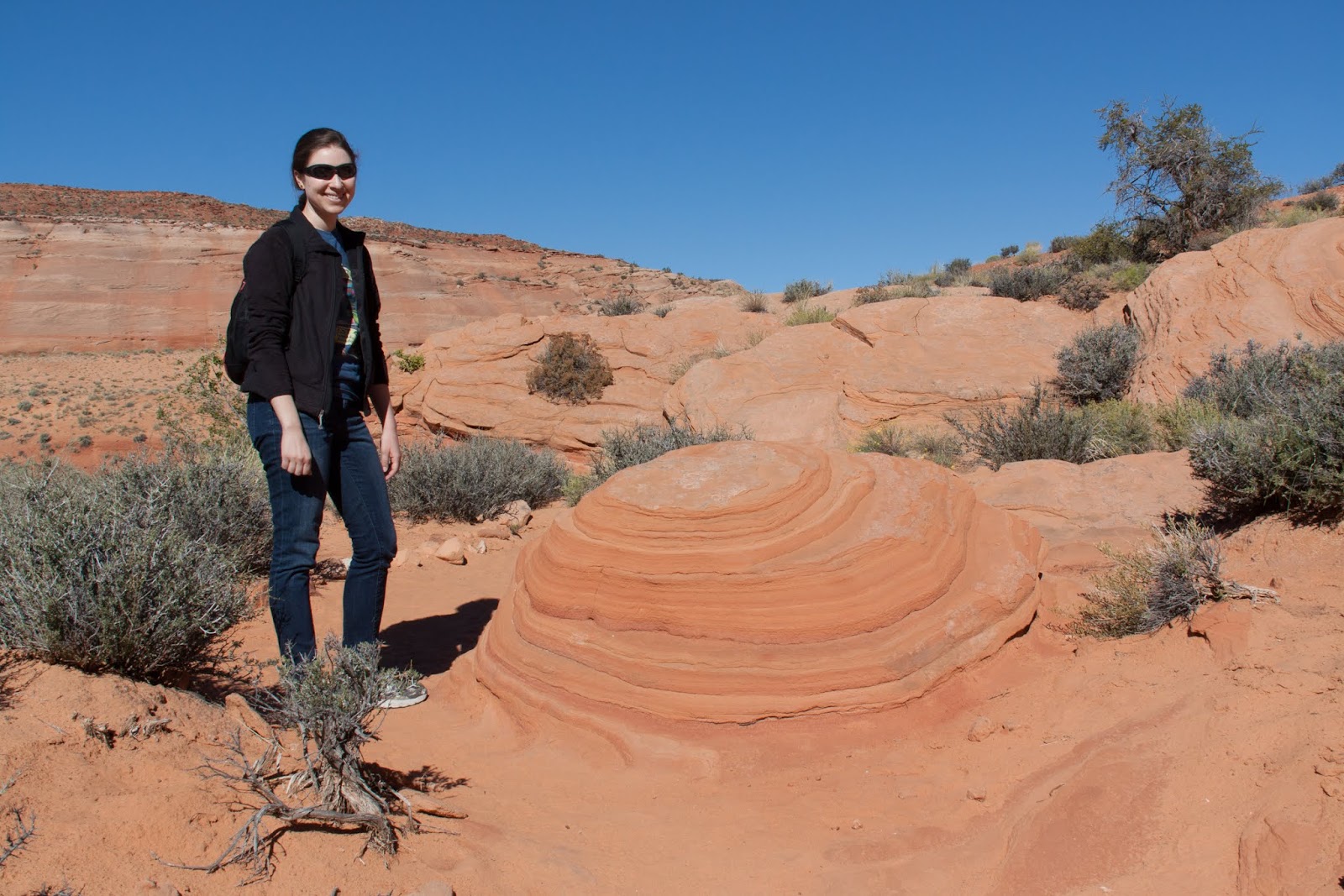 The canyon itself was beautiful and quiet, especially in the morning light as we saw it. It’s only a few feet wide at certain points, and nearly 30 feet deep, so one should never visit without a guide who knows the weather patterns. When it rains, the canyons fill up with water, and flash floods can come up in minutes; it doesn’t even have to be raining at the canyon for it to fill, since the flood waters travel for miles toward the river. The area is beautiful and potentially deadly at the same time. 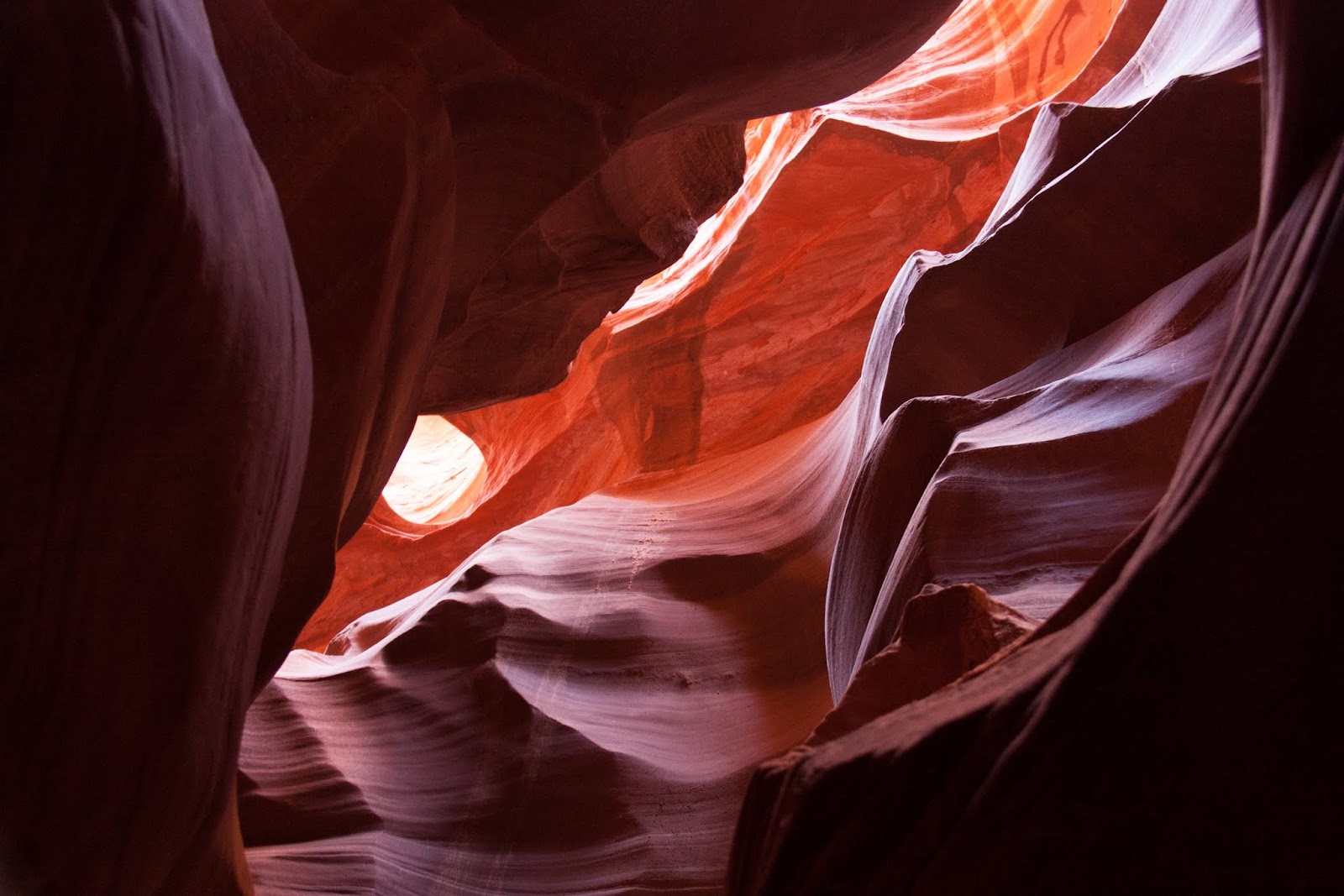 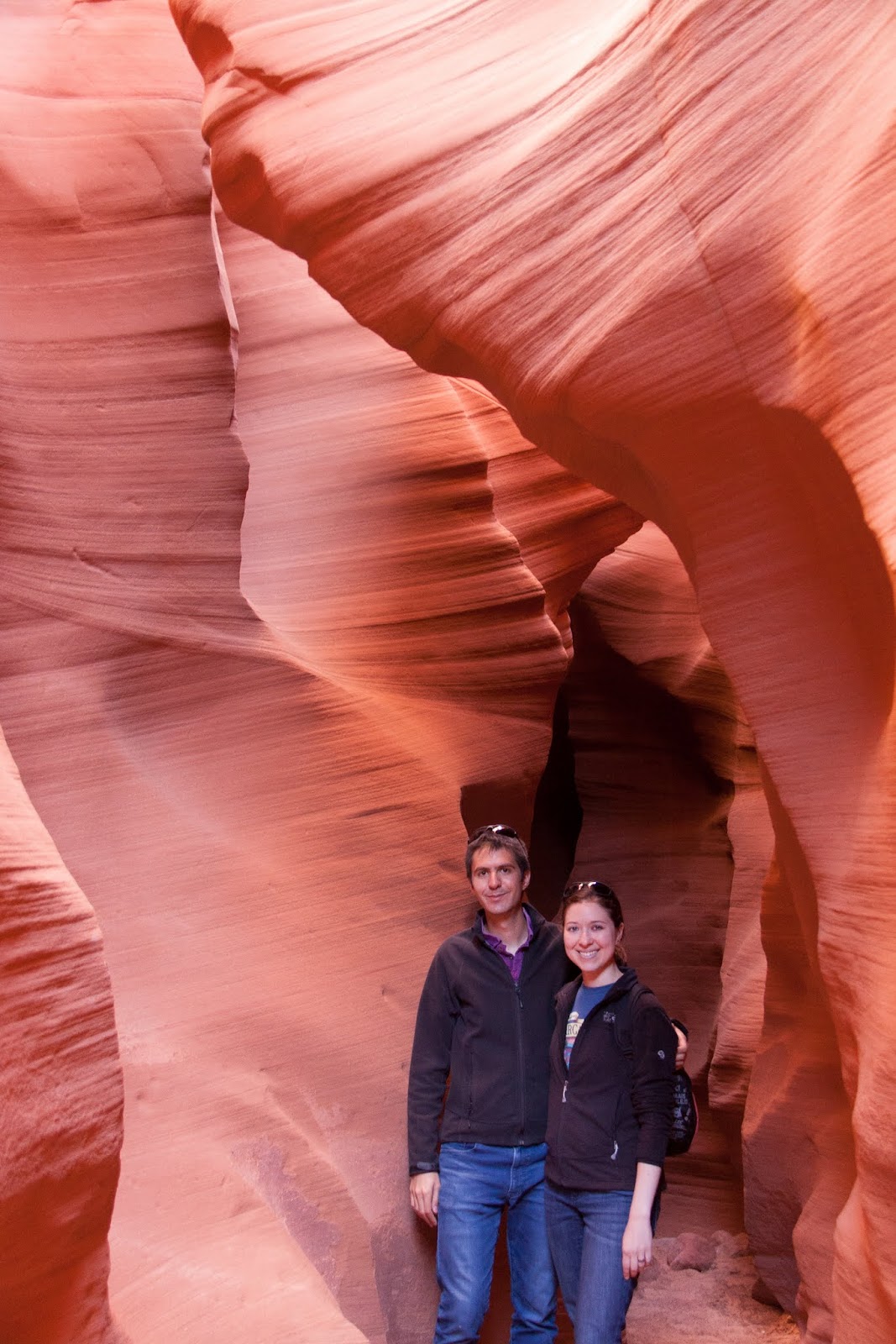 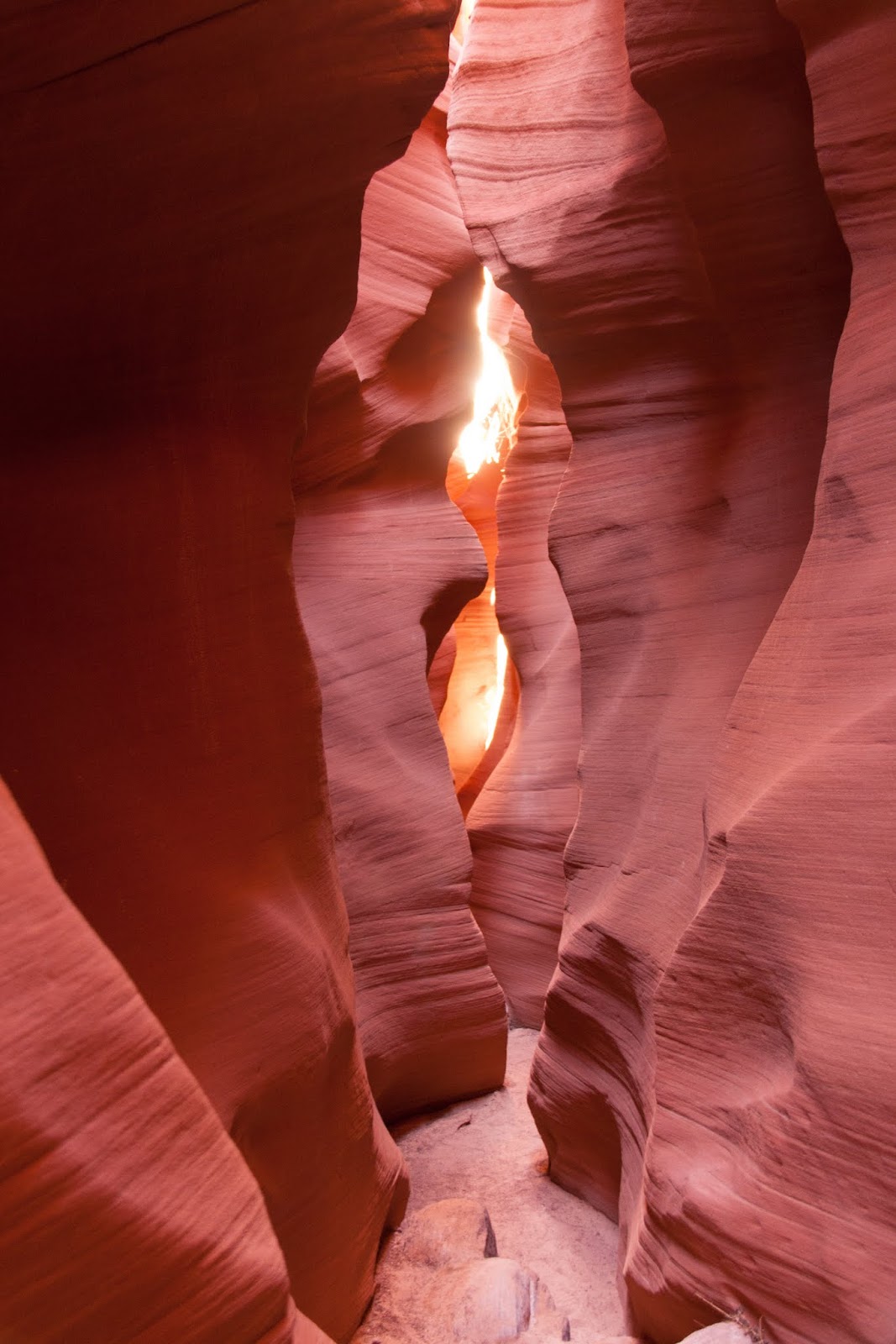 After the canyon tour, we went back to the headquarters and had lunch, then waited to board a bus for our river trip. The river tour was with a large group - we were on a pontoon boat with about 12 other people, plus the guide, and there were half a dozen similar boats - and was much more of a production. To access the river, the bus has to descend a long tunnel cut beside the canyon, passing through federally-protected areas to the base of the Glen Canyon Dam. Glen Canyon Dam is what creates Lake Powell and the Lake Powell Recreation Area above, and although not as large as the Hoover Dam, was still very impressive, especially from the water. To get to the boats, we had to walk about 100 feet from the bus across part of the restricted “back of house” area for the dam, and they made everyone wear hard hats for those 100 feet. It was pretty comical, but whatever makes the security people happy! 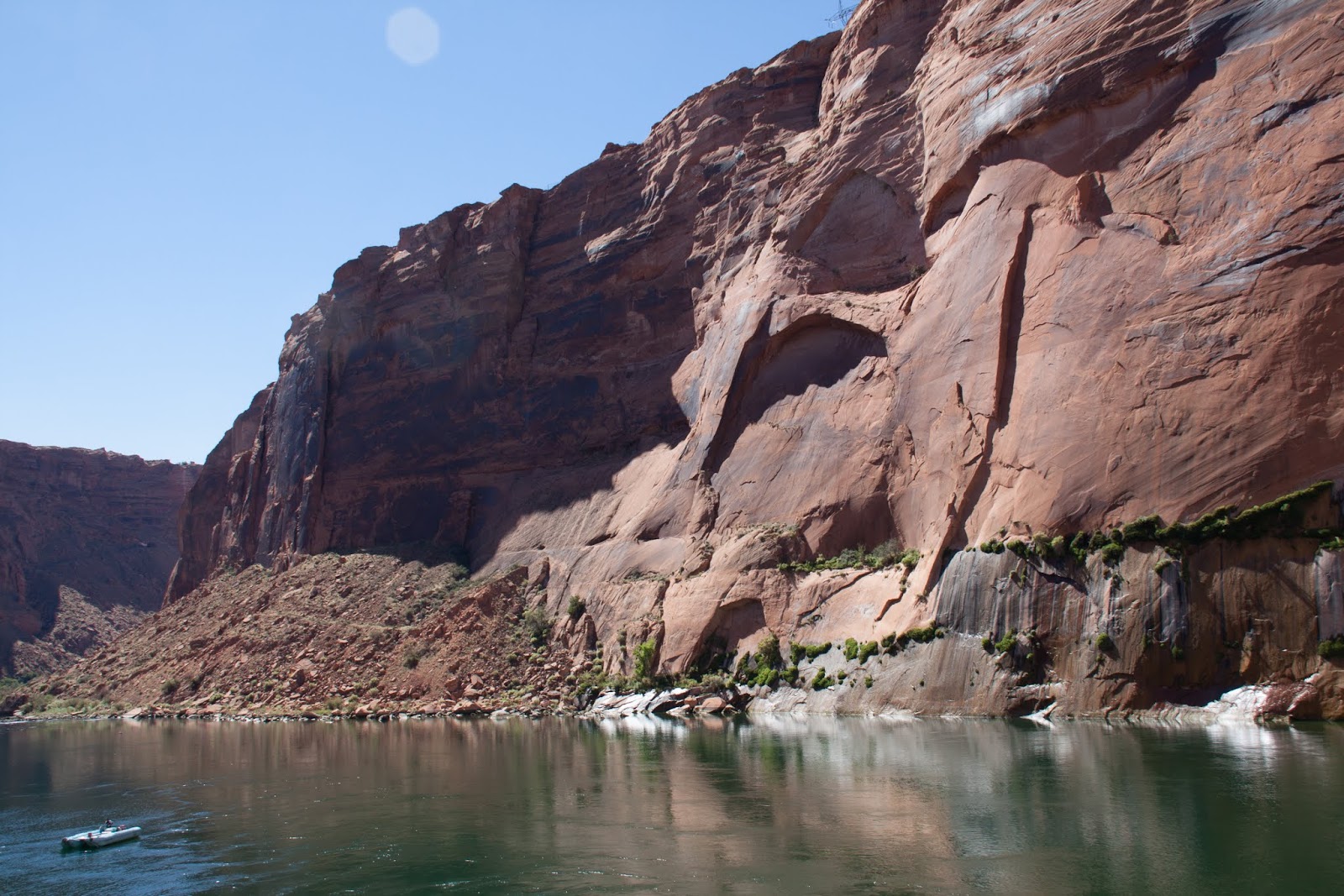 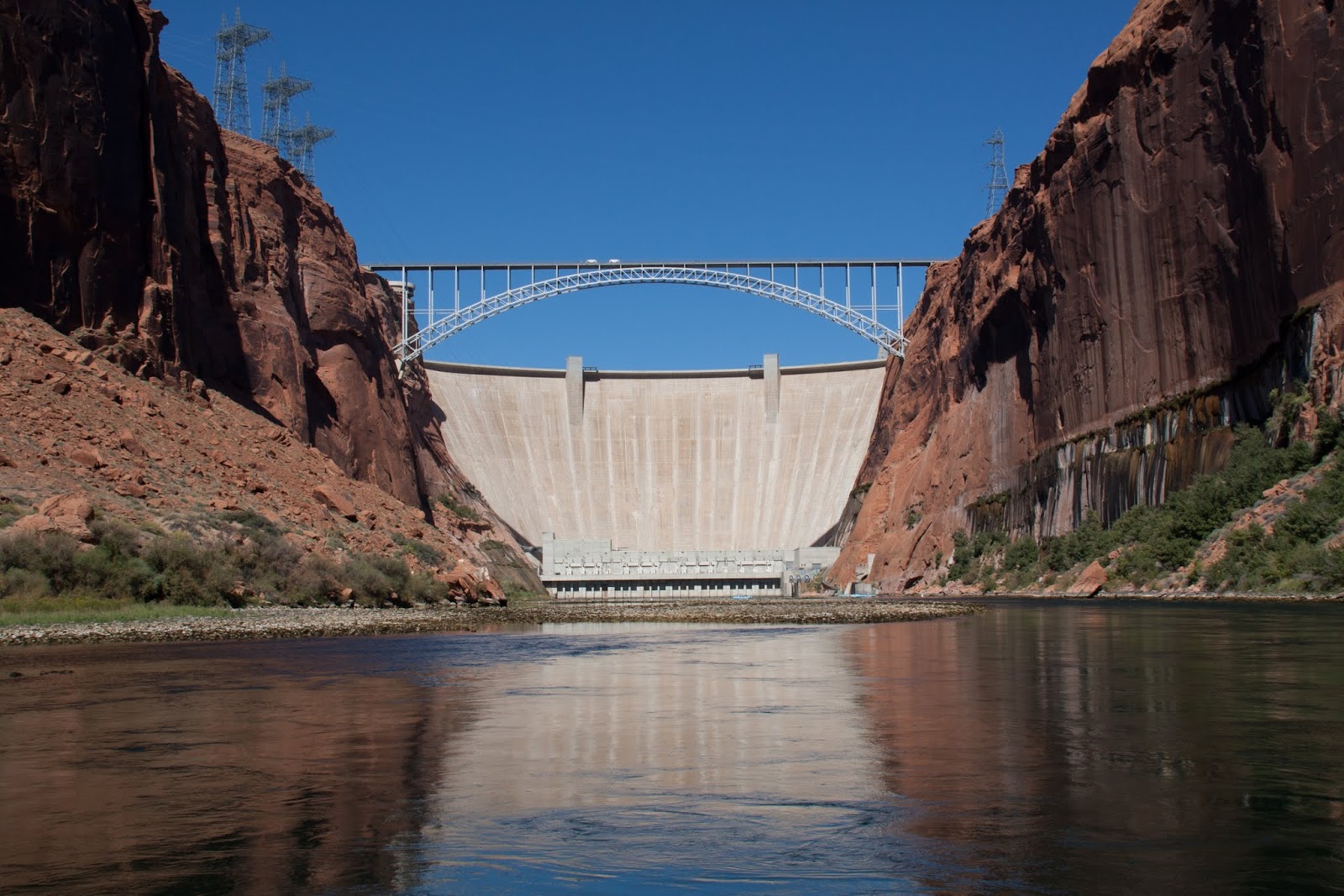 Once at the boats, we were off on our cruise of the Colorado River, finally getting face to face with the author of all the canyon landscapes we had seen so far. The weather was brutally hot and the canyon was without any shade, but the river was cold, and with the air moving from the speed of the boats, it wasn’t too bad. The rock formations are beautiful along the canyon walls, but it’s difficult to get a sense of scale. The canyon is about 900 feet deep, we were told, at Glen Canyon, which is much shallower than at the Grand Canyon, but still crazy deep. 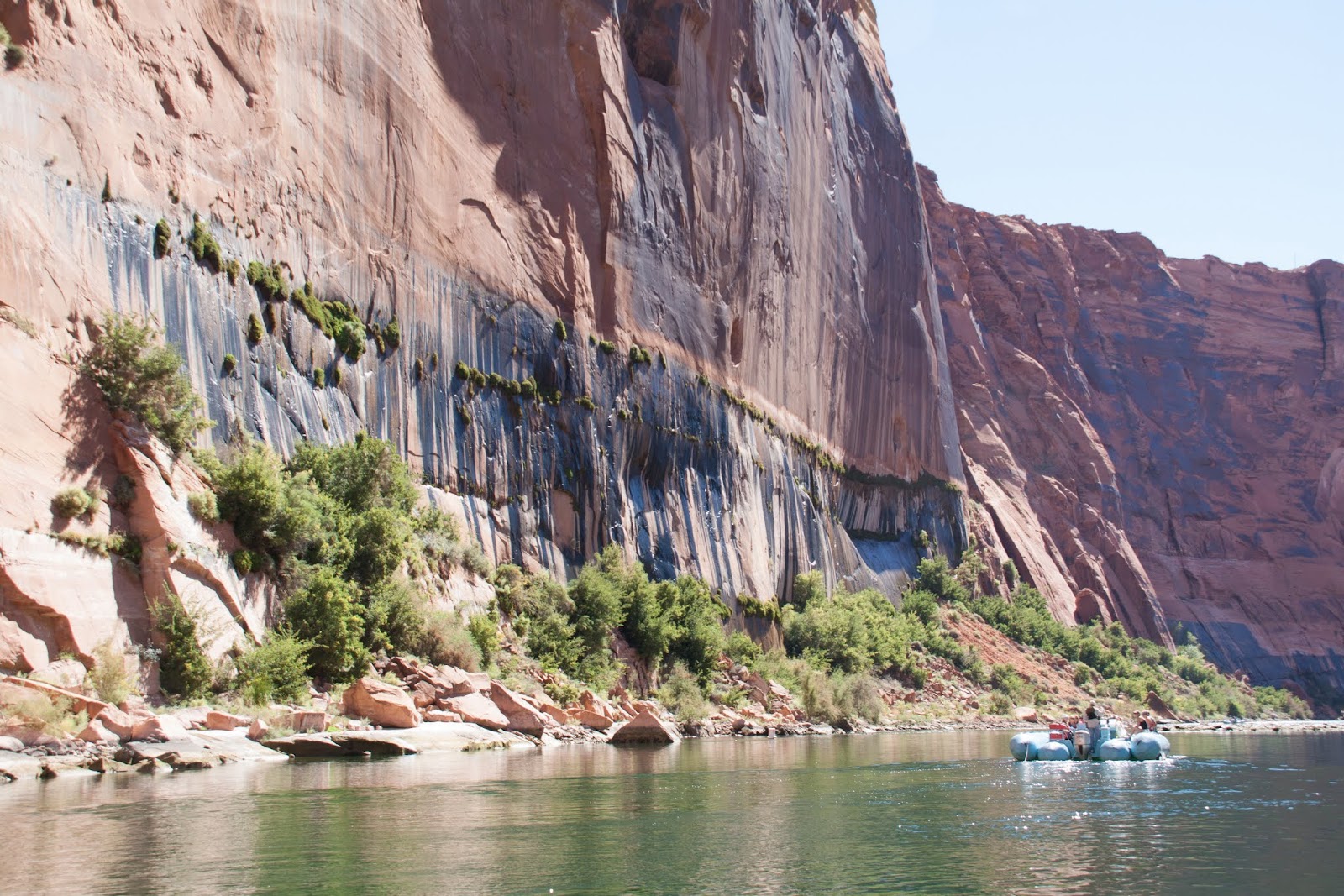 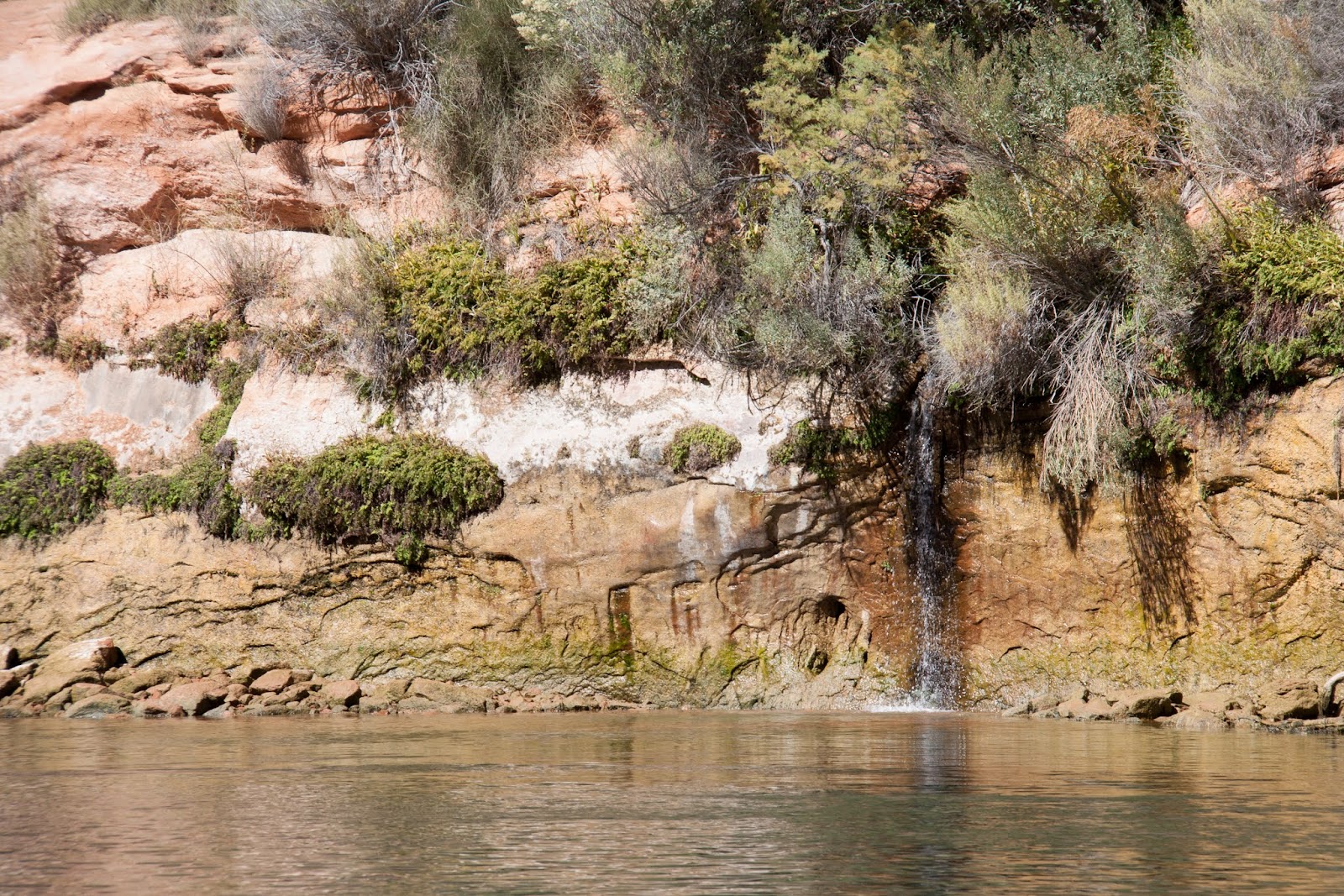 The coloration on the sides of the canyon are from bacterial oxidation of the minerals leaching out of the rock. It takes thousands of years for this “desert varnish” to form, and is easily destroyed by acid rain or erosion. Depending on the mineral content and the light, some of it sparkles, and it comes in many colors. The petroglyphs (rock carvings) at many sites in the area, which are themselves hundreds of years old in some cases, are made by scraping off this material, which has not grown back in all that time. Apparently the thing to do on these tours is to invent interesting (read: stupid) names for the shapes in the rocks and then tell them to the group, so that the only thing one can see afterward is the shape that’s been identified. Ergo, Lincoln Pez Dispenser, below.

Our guide discovered that one of the passengers was interested in birds, and thereafter took care to point out all the birds and other animals we could see along the way. We did see a coyote taking a drink, plus other assorted birds. The highlight of the trip was right at the end, when the bird watcher noticed what turned out to be a California condor circling overhead. We weren’t sure until we got home and analyzed the picture, but the bird’s tags were clearly visible when we zoomed in. California condors are endangered, with about 200 of them living in the wild, and about 400 total alive. They went extinct in the wild in the 1980s and since then have been re-released in batches. It was very exciting to see the condor, and the bird watcher commented that that alone was worth the price of the trip for him! 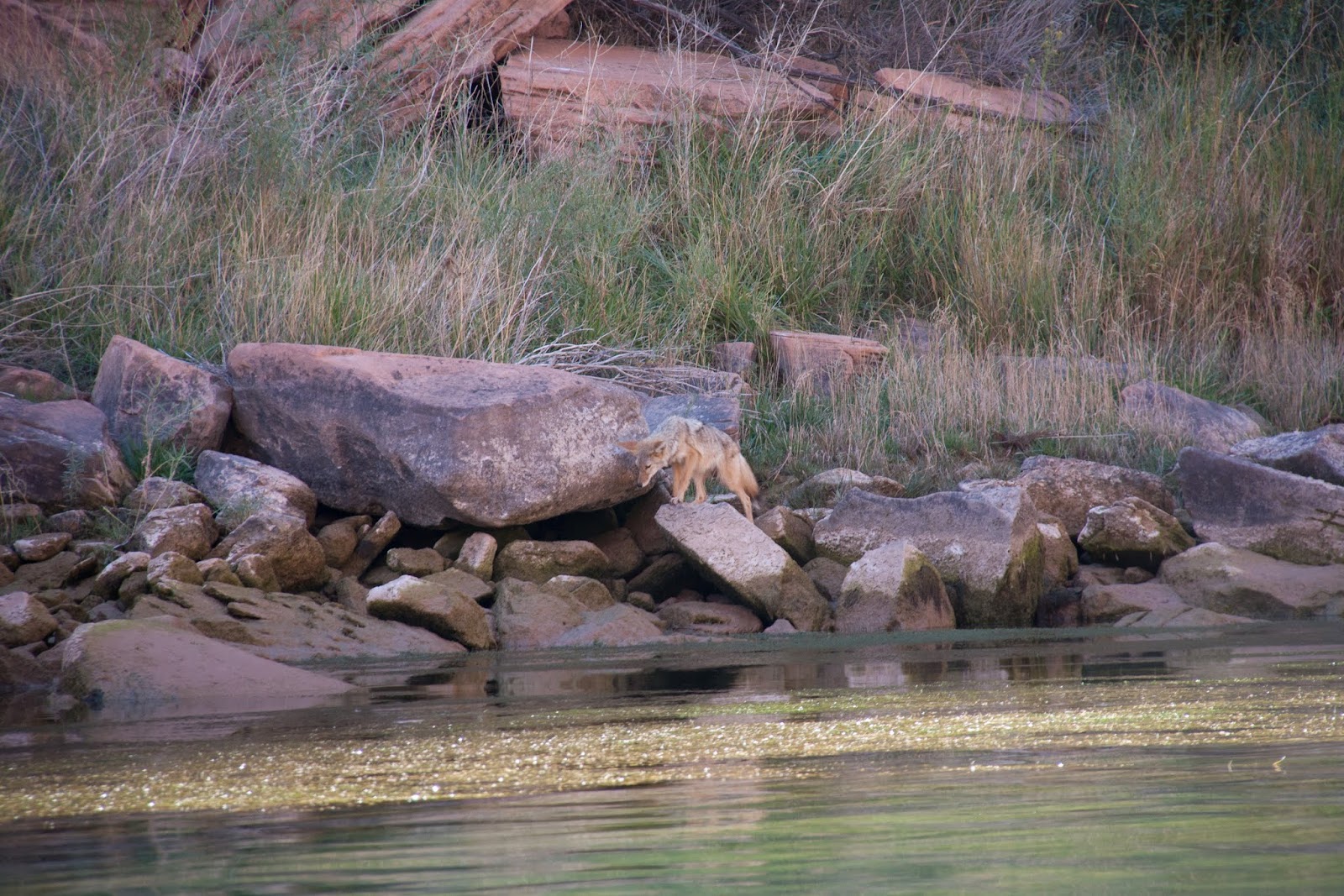 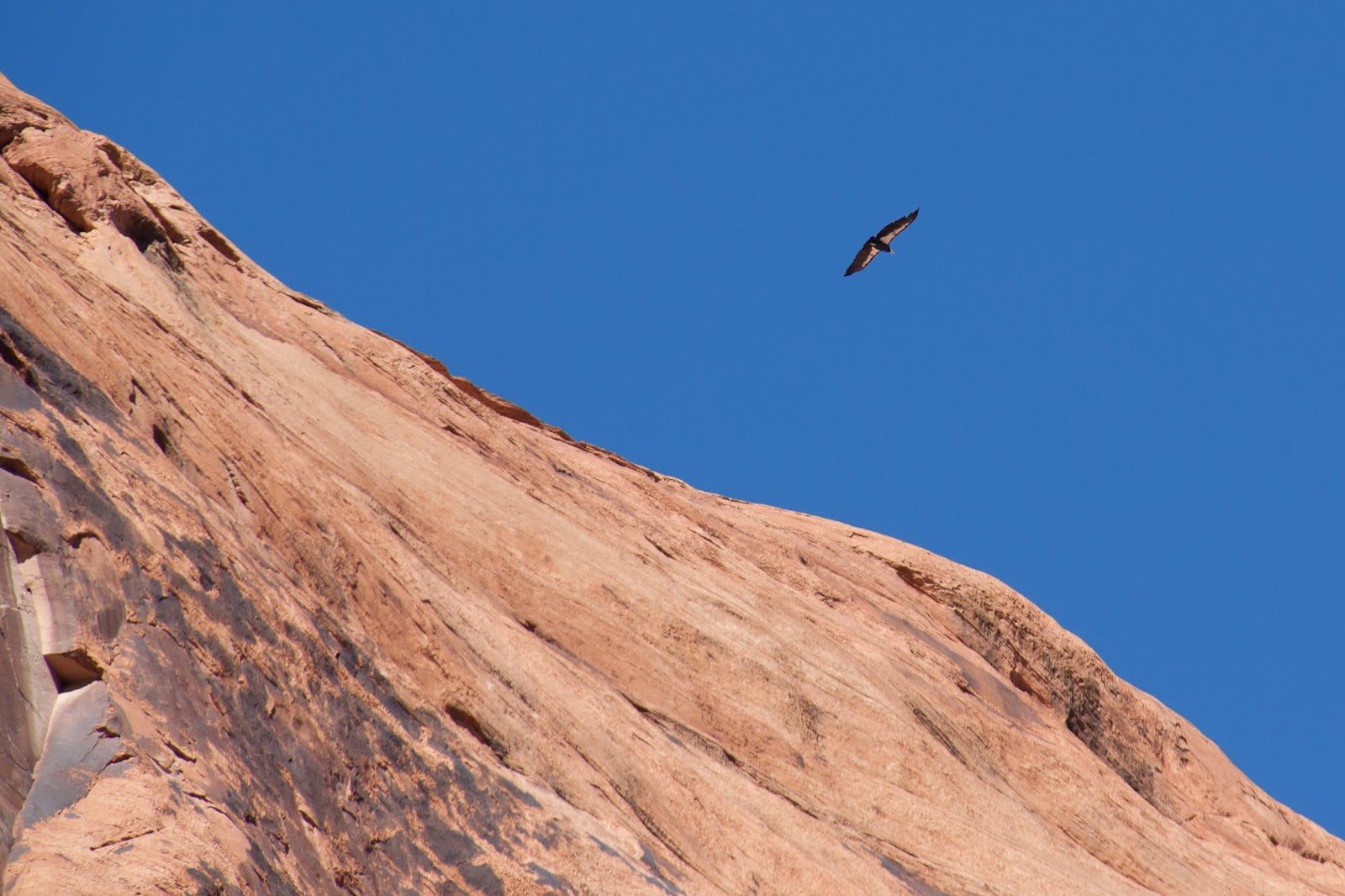 After our boat trip, we returned to the B&B to rest, stopping on the way to look out over Lake Powell. We went to bed, exhausted, for some rest before our final day of the trip: driving back to Las Vegas, along the north side of the canyon. After another delicious breakfast, we headed out. On the way we stopped at a dinosaur bones info site, which explained the types of fossils found in the area, and then decided to check out Valley of Fire State Park. It took us forever to find it, but once there, most of it was pretty impressive. Parts of the park look exactly like the Old West movies where the outlaws lie in wait for the heroes to ride down the path. Apparently some of the area was actually the hideout of some outlaws in the past. After visiting a few sites there, including an unimpressive petrified wood exhibit, we completed our drive back to Las Vegas, stopped again at the amazing BBQ place under the highway, and headed to the airport. 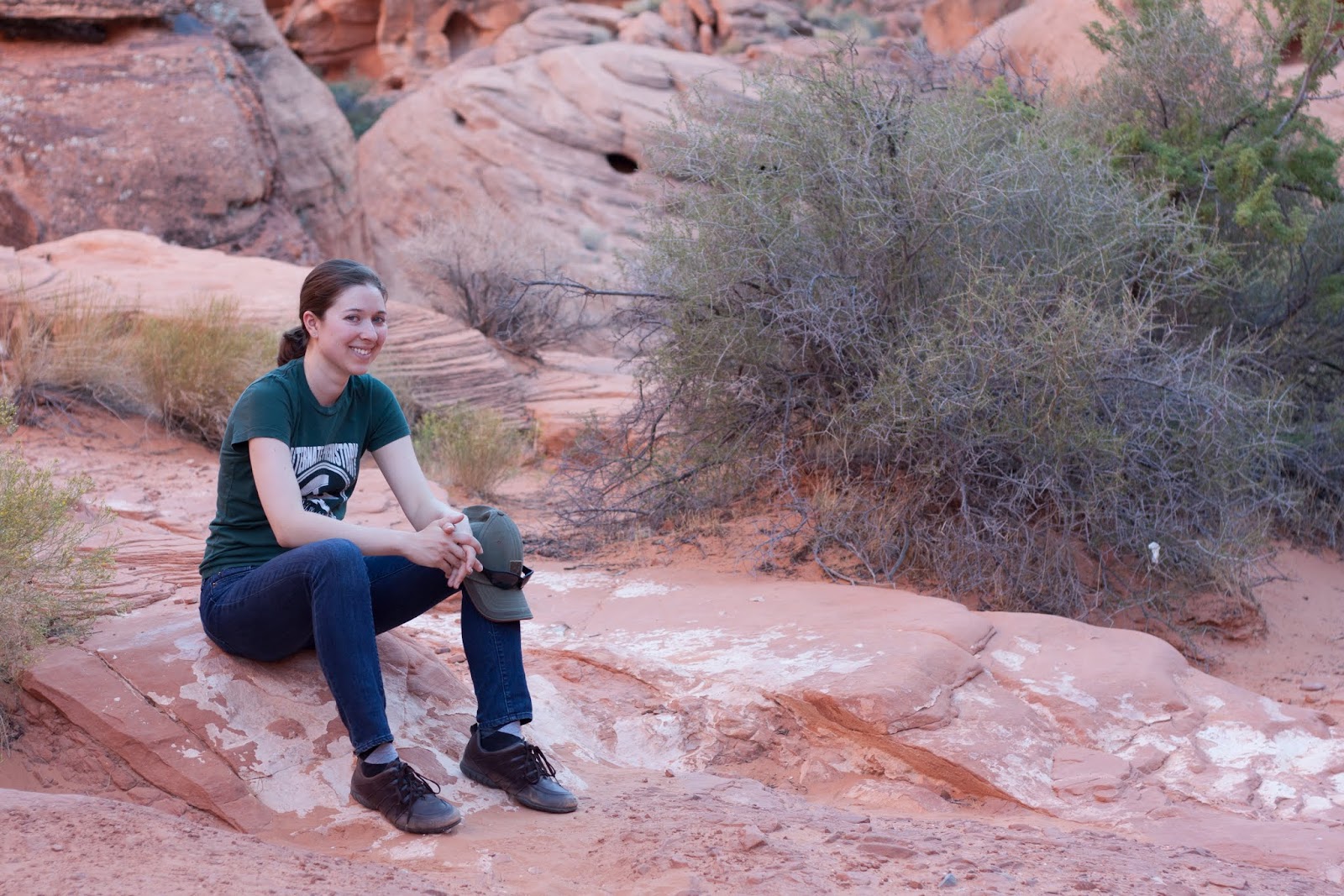 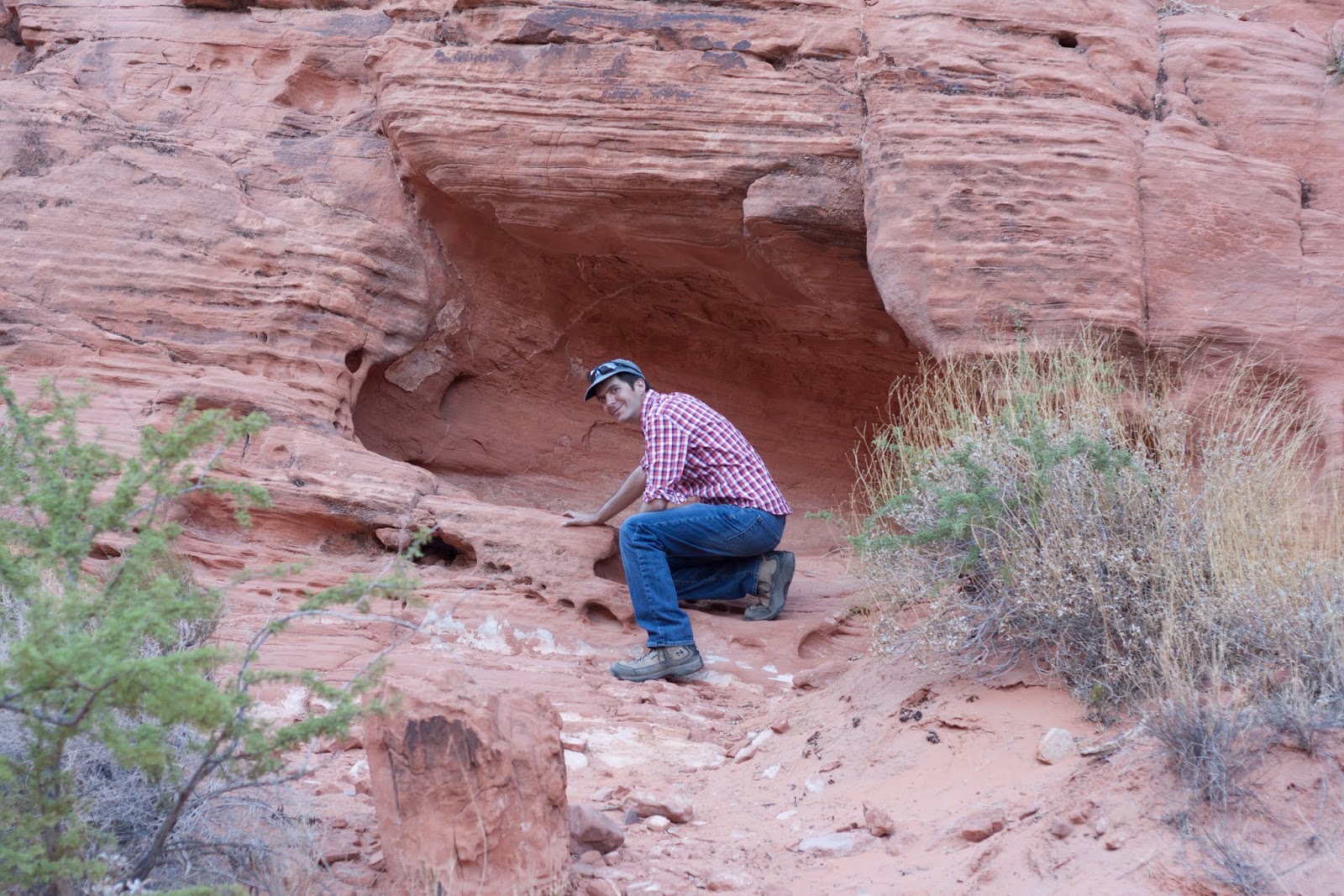 Overall, it was a great trip, despite some forgetting-of-maps and driving-in-circles and consumption of far too many calories in the form of granola bars, for lack of better food options. We really did pick the best time of year (or at least we were told so by literally every person we met), as the weather was great, and there were no crowds. Las Vegas was weird, Page was boring, but the rocks rocked. Deserts are a great place to see what the earth has been up to over the past millennia. As some of the exhibits we saw eloquently described, it’s here that we can see the forces of water, wind, and gravity/compression at work, compacting the layers of soil, then eroding them. Yet despite the seeming harshness of the environment, plants, animals, and insects find ways to thrive. I’m glad that much of this amazing area has been preserved as national park for everyone to be able to enjoy.