Housing Affordability in the Bay Area: An Architectural Perspective

The Bay Area’s housing crisis has gained a status akin to the weather: We can’t help but mention it whenever two or more Bay Area residents are gathered together, and we feel there’s equally nothing we can do to change it. But instead of the general praise given to the area’s weather, there is general despair about the state of housing. At least among the twenty-something set and construction industry professionals who make up my peers and colleagues, there are few answers and much criticism for the way we live here. It’s not dense enough, public transportation is a sham, and housing costs are outrageous. Many of my peers agree that they would not live here at all except that their spouse/significant other works in the tech industry, without whose salary they could not afford to live here, but whose worth is so valued here that it makes little sense economically to live elsewhere. Here in the Peninsula it’s just as bad as in San Francisco (“the city”), where the tech salaries are perhaps both the cause and the effect of the upward-spiraling housing prices. But there is also a strong pro-suburban strain even among some of these Millennials and late Gen-Xers, who long for a house of their own, a dog, and a yard where they can raise chickens/bees/vegetables and, one day, children. Some of them resist the idea of increased density and suggest that it’s for city dwellers only, who are perfectly welcome to up and move to the city so they can have their precious public transit and hipster culture. But what they aren’t recognizing, I think, is that the tech giants of the Peninsula cannot afford to have offices in San Francisco either, not with office rents as they are, and the trade-off for workers is spending upwards of 15 hours/week commuting back and forth on unreliable trains or congested freeways. I have a friend who recently made the move to SF so she could live where she wants, but now has to commute down to the suburbs for work, increasing her commute time more than 10x. The housing crisis here affects all of us, tech workers and otherwise, and advising people to move away is not going to solve anything, not as long as the region continues to supply some of the country’s best jobs. The San Jose area ranks 6th in the country in number of Fortune 1000 companies, despite having far fewer people than the regions ranked above and below it.

Meanwhile, those who do not have a family member working in the tech industry almost cannot afford to live here at all. There is poverty here, both in the city, where it is more visible, and in the suburbs. Child poverty is troubling and heart-breaking (here’s another treatment by the same author). Despite higher-than-US-average median incomes in many Silicon Valley cities, the median housing costs to rent or buy are higher than in Manhattan. I live in a one-bedroom apartment that is admittedly larger than my last NYC apartment, but I pay the same for it, plus pay for two cars and make less money than I would in New York. All of this is offset by my spouse’s better job here, but when I think of everything we gave up when we moved to the suburbs, it’s hard to accept.

My co-workers and I have been increasingly troubled by the housing affordability crisis, both as renters/homeowners and as construction industry professionals. What appears to us to be the easiest and most sensible step to reduce housing costs - building more housing - can be difficult if not impossible in a no-growth political environment like Palo Alto. Fortunately, not every town on the peninsula is the same, and growth may be coming to Mountain View and Redwood City soon, thanks to the election of pro-growth local politicians last year. The lack of a unified regional approach to housing, as in transportation, water management, and other regional issues, makes building enough housing a difficult proposition even when there’s political will. Further, construction is a slow business, and new projects approved now may not come online for five years or more. Building market-rate housing will ease pressures on all housing costs in the long term, but in the short term, waiting lists for affordable housing are years long, and there is very little public funding available to build more. How can we get more people, including architects, contractors, developers, and the general public, to see the benefits of building more housing? 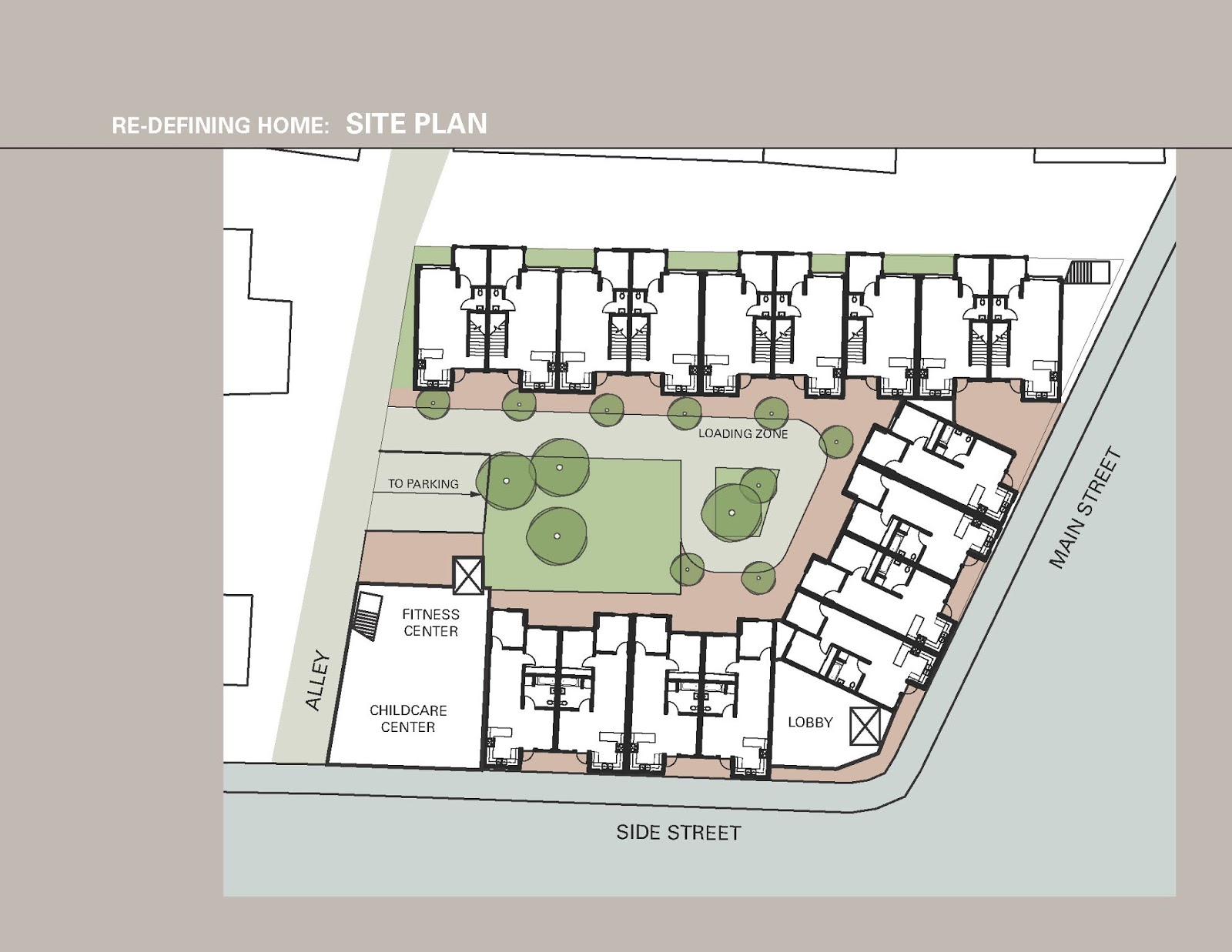 We decided to participate in the Home Matters - Redefining Home design competition as a way to get started on thinking about this issue. (I should note that we do not build multi-family housing in my firm, so this was something we did not already know much about.) The brief asks teams to consider an arbitrary corner site of 25,000 SF in order to design a solution that could be replicated anywhere. Our first move was to reject this place-less way of thinking about housing; we agreed that housing types, sizes, and construction are place-specific, and it made little sense to design a prototype without knowing where it would be built. We focused on the extreme economic divide between Palo Alto and the next-door town of East Palo Alto, where incomes and other measures of economic health are strikingly lower. Our team researched the local issues and met with representatives from the Palo Alto Housing Corporation [Edit: apparently now called Palo Alto Housing], an affordable housing developer, to learn more about challenges to building and maintaining affordable housing. We visited Alma Place and 801 Alma, an SRO and an affordable family housing complex, to see what kinds of complexes have been built here before. 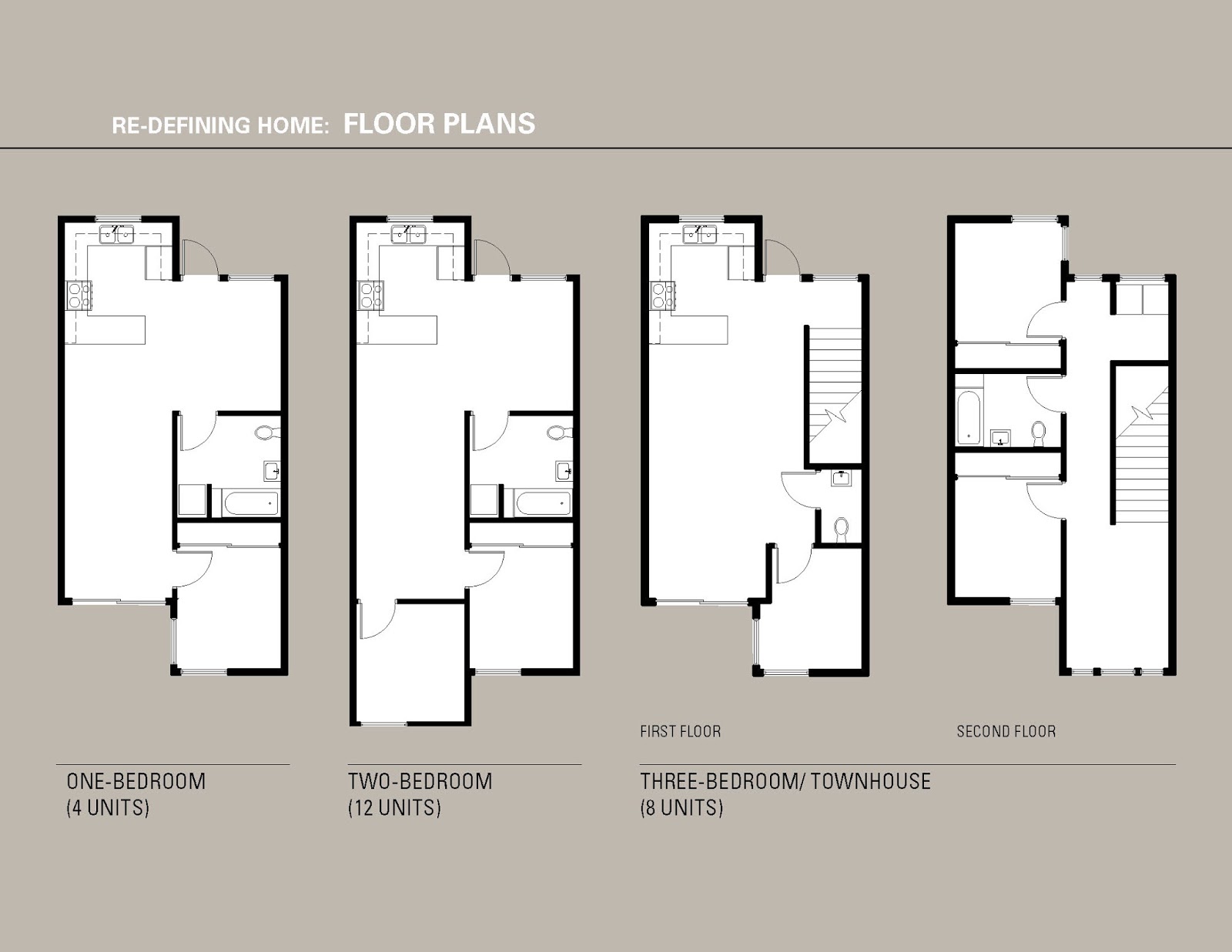 We learned that the biggest difficulties in Palo Alto / East Palo Alto are (1) acquiring a site, since zoning restrictions, land costs, and a lack of available building sites makes it difficult to find anywhere to build; (2) supplying sufficient parking, which inevitably must be put underground due to the aforementioned cost of land; (3) assembling sufficient funding; and (4) overcoming community opposition. Wealthy neighbors oppose new affordable housing units, fearing that “those kids” will bring down the quality of the local schools through overcrowding or lower test scores. They claim that “those people” will congest the roads, cause crime, and overtax community resources. When even low-income senior housing cannot stand a chance of being built here, it’s easy to understand why building family housing is so difficult. 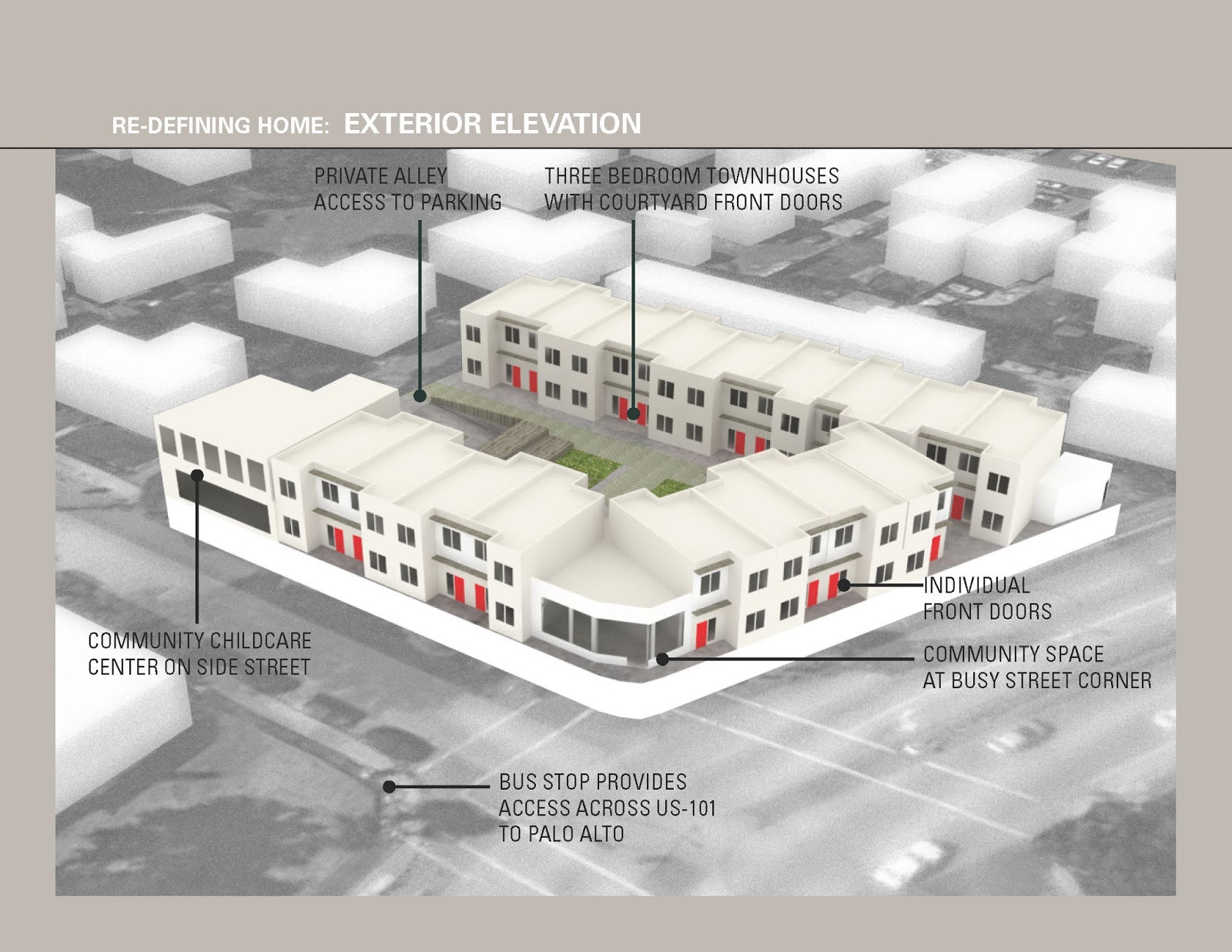 Our proposal is to design a low-rise, three-story complex, with the obligatory underground parking, on a vacant, appropriately zoned site in East Palo Alto (EPA), where the families we would hope to serve are already living. We propose units where every unit has a front door, most of them at street level, and where the mix of units favors the larger families more common in EPA. Amenities would include a public daycare and fitness center, a private interior courtyard for resident use, a community room with kitchen, and a computer room. The financial twist is that we would invite the local Fortune 1000 companies - there are over 30 in the San Jose area - to sponsor one of the 24 units and provide in-kind donations like wireless access points, computers, and smart home technology for energy savings, etc. Why not involve the tech giants in a tangible way in the creation of affordable housing? As George Lucas discovered in attempting to build affordable housing on his own property in Marin, even if you have the land, it’s not enough unless you can find the financing. He is managing to build a complex by providing both the land and the financing himself. If Google, Apple, Hewlett Packard, and the others are serious about helping to solve the crisis they’ve helped create, then they can surely afford a few thousand dollars each to sponsor a unit. 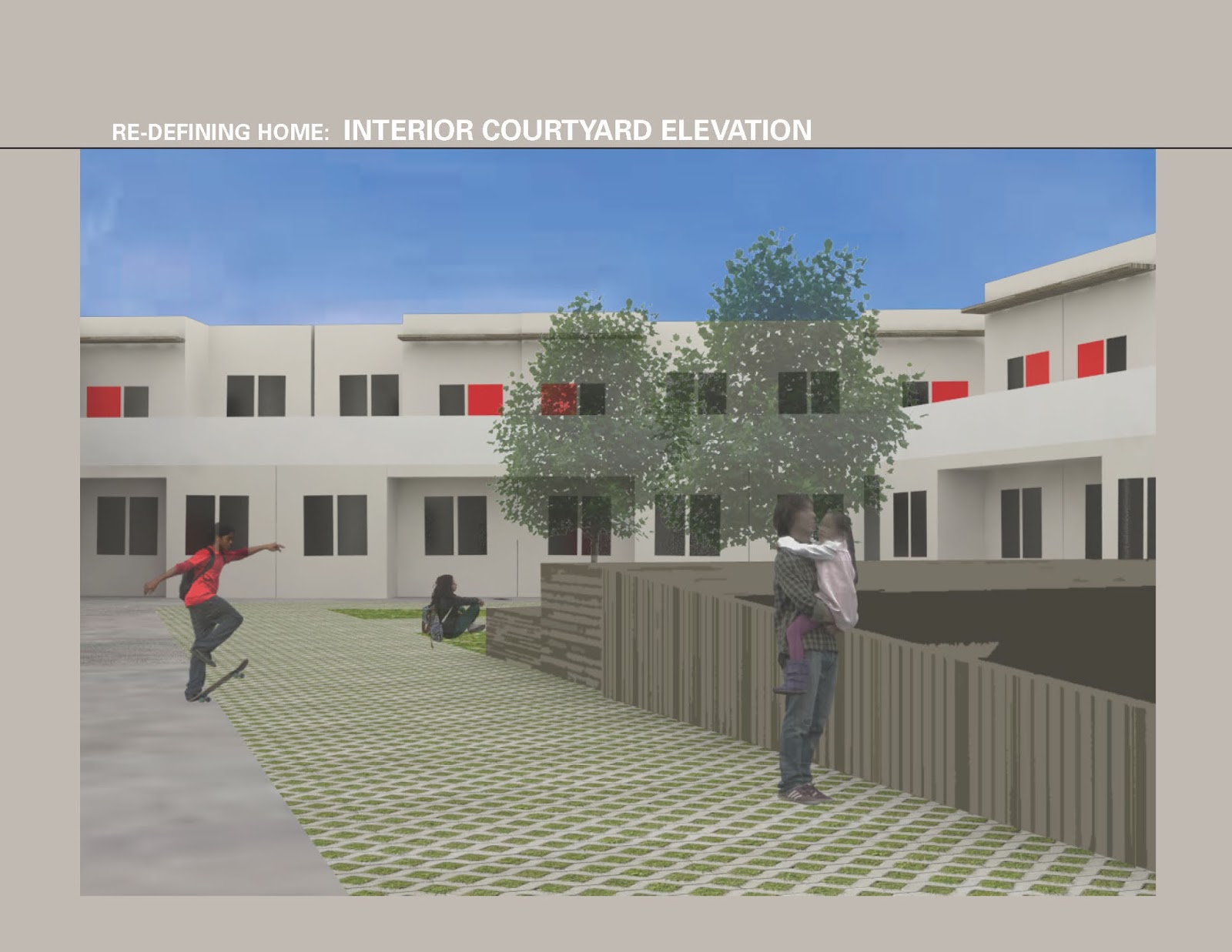 What we hope to submit next week (if we do submit at all - my attitude toward architecture competitions hasn’t changed, and I personally don’t care if we submit it) is more of a how-to guide on what it takes to get involved than a blueprint of an affordable housing development. Any real building will be shaped in a myriad of ways by the specifics of its site, funding mix, local policies, and local needs. The primary issues today may not be the same in five years; for example, if attitudes and policies toward parking change, then a significant development burden will be lifted. In that case, continuing to repeat a design that assumes more than one parking spot per unit will be pointless. What we’d really like to achieve is to galvanize the conversation about affordability in the industry and the region in a positive way, rather than to continue bemoaning the crisis while doing nothing about it.

A more utopian but, I think, very interesting speculative approach to this issue is a project by Alfred Twu to show what it would take to house all the tech workers on their respective tech campuses (more on his website). Google is actually working towards building some housing on their side of the freeway in Mountain View, which looks like it might happen due to the aforementioned changes brought by the recent local elections. Working out the details will be tricky, but certainly worthwhile.

I don’t know yet what the next step is in my growing interest in housing, whether it’s joining an organization that works for affordable housing, getting involved in politics, or offering my time to local developers who are trying to build housing. My hope is that if I’m here for the long term, then maybe I can find a way to make this place the kind of place I’d like to live in the long term.

Thanks to my teammates Kelli Ledeen, Kate Conley, and Kim Castillo for permission to post our competition entry images here. You can see the rest of our entry on my Tumblr. Statistics and research compiled from the American Community Survey.