An Unexpected Shortcut Through IDP

NCARB’s decision to reduce the required number of hours for IDP (the Intern Development Program) couldn’t have come at a better time. Good on NCARB for making these important changes – shortening the ARE and now IDP! “IDP Streamline,” as it’s known (not to be confused with the much more sinister Operation Streamline), has reduced the required hours by 1/3, by eliminating the “supplemental” (read: pointless) hours that were required beyond the “core” hours. Those extra hours could be in any category of work; they were just filler to make IDP last an extra year. But no more! Now once you finish the core hours, satisfying all the requirements for breadth of experience, you’re done. Thankfully, California follows the national IDP requirements, so as soon as IDP Streamline took effect in July, my target date for getting licensed moved up by about a year. Thanks, NCARB!

And so it came to pass that on August 15th, I filed my final hours report, which, duly approved by my supervisor, granted me the ability to file additional paperwork with the State of California allowing me to take yet another exam and then, if I pass, file for my license. So, you know, I’m getting there. 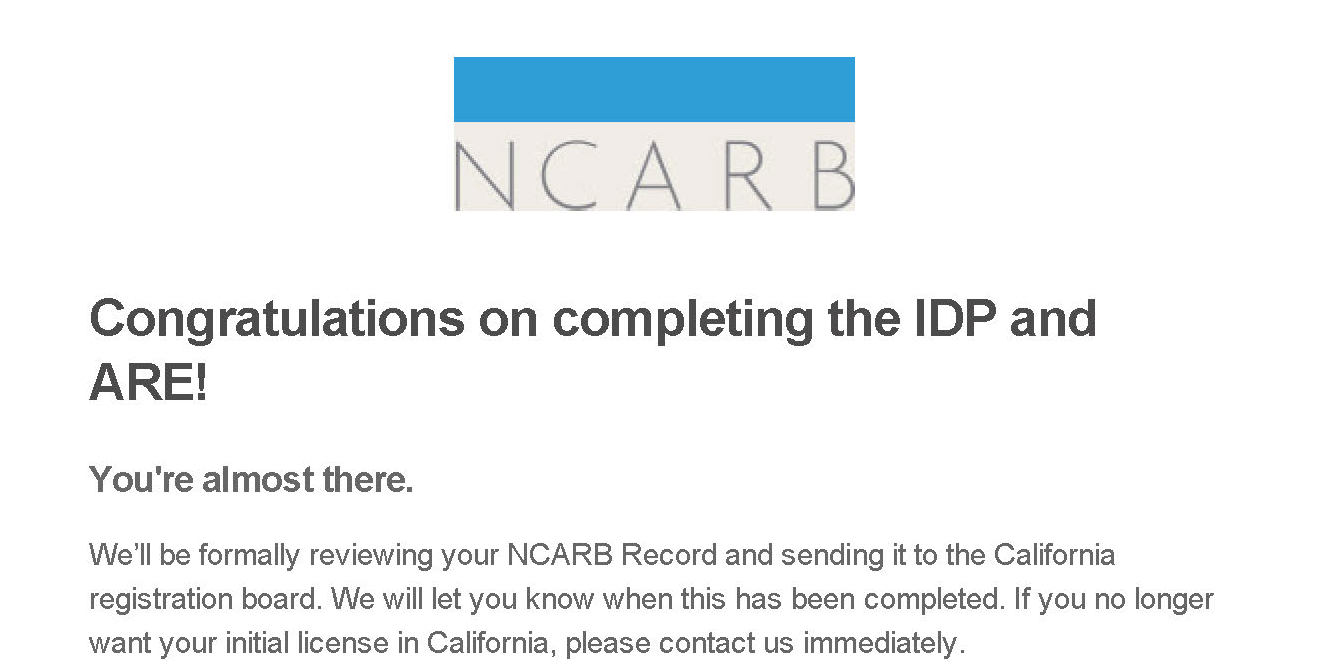 Lest anyone think that the new IDP regime is too soft on us younglings, keep in mind that the “core hours” requirement is still pretty onerous. While only 3,740 core hours are required, due to the nature of the category requirements, I ended up logging 4,847 hours in my attempt to satisfy everything. Believe it or not, my real life work experience didn’t line up precisely with NCARB’s categories, so I had to work a few extra months beyond two years in order to finish. And I got lucky, since many folks don’t have jobs that allow them to take on such a wide range of tasks in such a small amount of time. Fear not, old school architects: We’re still subject to an overly-burdensome set of licensing requirements. As of 2012, the median time it took to get licensed after graduation was about 8 years. Even though that’s coming down, as of 2015, it’s still taking about 5 years to finish IDP and 2.5 years to finish the AREs. (Check out NCARB By the Numbers for more stats and previous averages.) The average age of someone getting licensed is still about 33 (the previous high was 36 years in 2008). I don’t think it should take that long! And as for me, even though I have a master’s degree from an accredited school, more than two years of work experience, and have passed all seven difficult exams, I’m still not an architect in California.

To those still laboring to fill up those IDP categories, remember: the IDP Guidelines gives you the descriptions of what fits into those categories. Read those descriptions well! Many of them may be broader than you assumed, or some tasks you would normally lump under “construction documents,” like reviewing consultant drawings and coordinating their work, should really be placed in other categories. Don’t sell yourself short by throwing everything into one category, like I did for the first year or so. It’s probably easier to do it right when you’re filing reports weekly, but if you do bulk hours reports like I did, make sure you track all the relevant categories.

My next step is to get California’s approval to take the CSE (California Supplemental Exam). Look forward to future posts on that!

And now, for something completely different, here is a list of famous ex-architects, who took their architecture degrees and ran away with them into different fields. (Ok, fine, I admit it - this was a separate post that I just tacked on to the end here. Enjoy. There’s probably no architect out there who hasn’t thought a few times about giving up and entering a less bureaucracy-ridden field…)

Few professions prepare you to do something other than what you’re trained to do quite like architecture. We architectural professionals love to think of ourselves as generalists, a little bit good at a lot of things, and this tends to draw us in many directions at once. Here are some of the more famous figures who got their training in architecture but jumped ship for other (inevitably more lucrative) pursuits.

“Weird Al” Yankovic: A Cal Poly graduate, this famous parodist has been assaulting the airwaves since he interned at his college radio station in between studio crits.

Charles Eames: Famed designer and half of the Charles & Ray Eames power couple, Eames is best known in non-designer circles for his chairs and short film “Powers of Ten.”

Natasha Case: You might not know her name, but you may have had her ice cream. Together with her friend and former real estate developer Freya Estrella, Case created the ice cream truck Coolhaus, which serves ice cream sandwiches inspired by architects. They now have trucks in three cities & two retail locations, and sell their sandwiches in many high-end grocery stores. True story: I had a sandwich from their truck in NYC and it was tasty.

Joseph Kosinski: Director of the films Tron: Legacy and Oblivion (of which he was also writer and producer), Kosinski gradated from Columbia GSAPP and apparently has taught 3D modeling classes there. When the new Tron came out, a bunch of my classmates and I went to see it. I can’t say I was overly impressed, but hey, that’s a project seen by way more people than any project I’ve yet to complete as a designer!