On the Border: Part I

This past July, I traveled to the US/Mexico border with a group of folks from First Presbyterian Church in Palo Alto. Our goal was to learn about what happens at the border, what it looks like there, and what, if anything, we should do about it, including whether to become a sanctuary for undocumented individuals (see Sanctuary Movement below). We were a group of high schoolers, college students, younger adults, and older adults, and we were mostly unfamiliar with US border security and what life is like at the Arizona border; we discussed what we knew before the trip, and it was just things we’d read in the news. Despite this limited knowledge, we were eager to learn more.

My own interest stemmed from my 2012 trip to Israel/Palestine, where visiting the wall was one of the most powerful experiences I’ve had. The border wall separating the occupied territories from Israel is an architectural weapon, used deliberately and actively to acquire territory, restrict development, and deny access. I wanted to know how my own country uses its border walls, although admittedly the situation here is different. We are at peace with Mexico, although one might not guess that from the way we treat our neighbors. I didn’t even know what our border wall looked like, but I was determined to find out.

We started our journey by spending 24 hours on an overnight train from San Jose, CA, to Tucson, AZ, changing trains in Los Angeles. Most of us spent the time reading The Death of Josseline, a nonfiction account of various aspects of the Arizona border situation. Looking back, it was amazing how many people and places we saw that were described in the book. I would recommend it if you want a more journalistic take on what we saw. As for Amtrak, I hope I never have to take a train overnight again - at least, never again without access to a sleeping car. It was pretty miserable, and none of us slept well. We arrived early Monday morning at the Tucson train station where we were met by our intrepid guide, Indira, from BorderLinks, the nonprofit educational group who organized our trip.

The BorderLinks facility in Tucson is a humble affair, a converted office building that still has stained acoustic tile ceilings, converted cubicles for dorm rooms, and no sign on the outside. Inside, there’s an office, a kitchen where the staff prepares vegetarian meals for the visiting groups (“delegations”), the dorm area, and some showers. The group’s sole purpose is to educate visitors like us about life on the border, and provide us with ways to meet the people who really know what’s going on. All the staff members we met were enthusiastic about their mission, knowledgeable, and ready to help us learn more about Tucson and immigration policy. 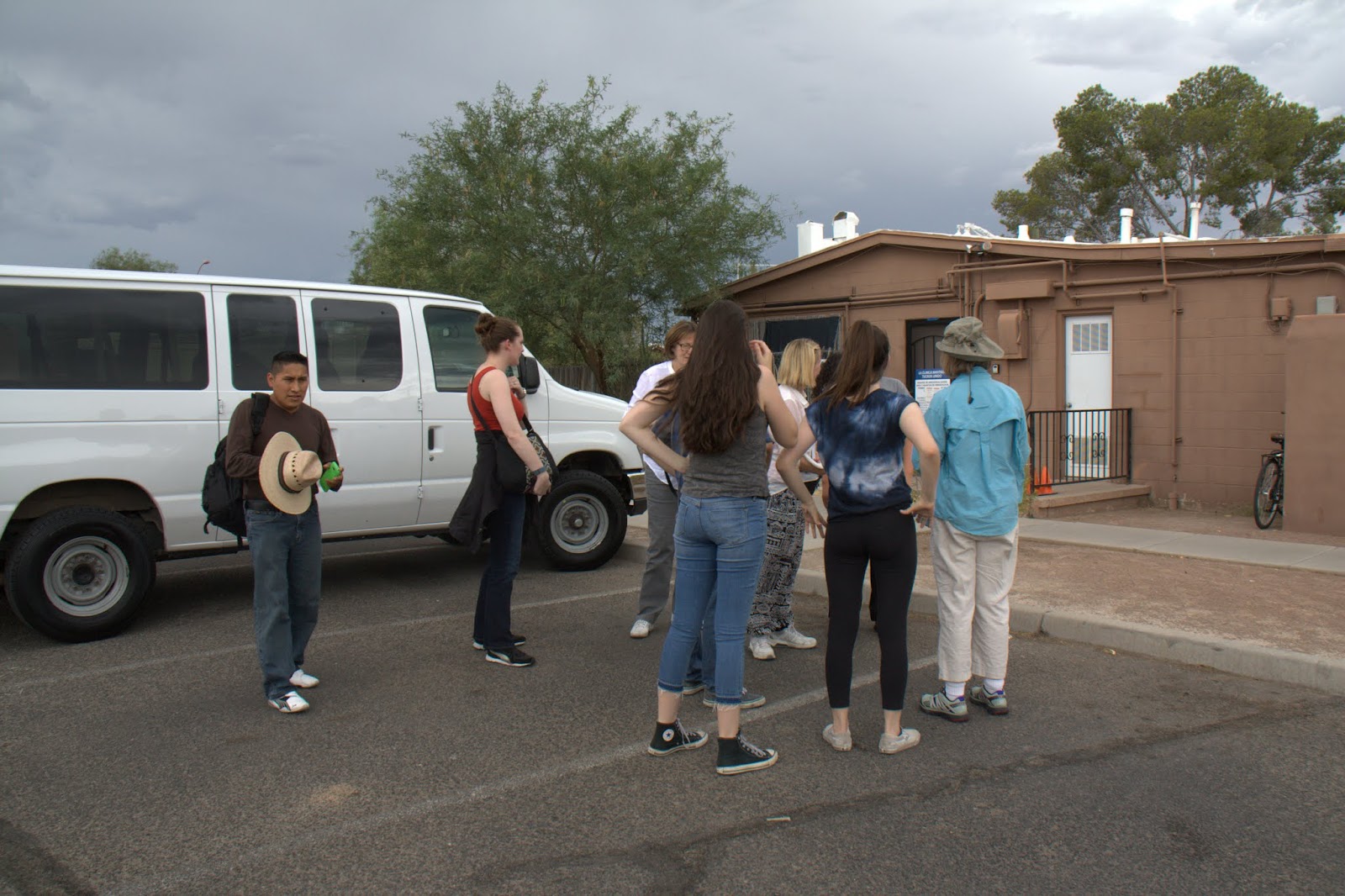 Our first meeting was with John Fife, former pastor of Southside Presbyterian Church in Tucson, who was one of the leaders of the Sanctuary Movement of the 1980s-90s. This group risked imprisonment to help asylees from Central America find new homes in the US. At the time, thousands of Central American refugees were fleeing violence in their home countries; some of that violence was partially funded by the American government. The US government, because of its involvement in the upheaval, refused to recognize these refugees as legitimate, claiming they were simply looking for better jobs. In fact, some of the individuals who were caught by the US authorities and returned to their home countries were later killed. The churches on the Arizona border, recognizing this injustice, decided to defy US law and harbor the illegal refugees, assisting them in traveling to other cities or to Canada where they were relatively safer from being deported. John spoke to us about his experience and the history of the movement. Though retired now from ministry, he is still an activist and meets with groups like ours to keep the memory of the former movement alive.

Today, a new Sanctuary Movement has formed around the unjust policies that are used to deport individuals with no real reason to be deported - those with families, including American citizen children, who have lived in the US for years or decades, are upstanding community members, and some of whom have even been trying to gain legal status for long periods of time. The new movement seeks to halt deportations, rather than to move people to safety. Southside Presbyterian is still at it, and has hosted several people since they re-started the Sanctuary Movement in 2014.

After our meeting with John, we went to Southside and met with current pastor Allison Harrington, and with Rosa Robles, the woman who is now in sanctuary at the church. Rosa has been there over a year, having failed to receive a stay of deportation after being found to be in the country illegally during a minor traffic stop. She’s been living in Tucson since 1999, has two young sons, and no criminal convictions. Southside is working to get her deportation case closed so she can return to a normal life. Rosa graciously met with us for a few minutes, sharing her story, as she must have done hundreds of times to friends and strangers alike. It was her birthday, and as we were leaving, congregation members were setting up a few flowers and balloons. She is not able to leave the church building, and cannot attend her son’s baseball games, school events, or other normal things – so even her birthday is celebrated inside the church. She described how difficult it is to live day after day inside, worried that by stepping outside, she could be arrested and deported. Current US policy allows situations like hers to happen: Her deportation order could be closed by a judge or ICE official, since her case falls under prosecutorial discretion, but until some official takes that action, she has an outstanding order of deportation. By longstanding unwritten policy, immigration officials will not enter the church to remove her, so she stays inside, waiting for some official action that will allow her to leave. ICE officials have stated that they are not interested in deporting her, but without any papers allowing her to be here legally, and with no way to gain legal status, she is stuck in limbo. 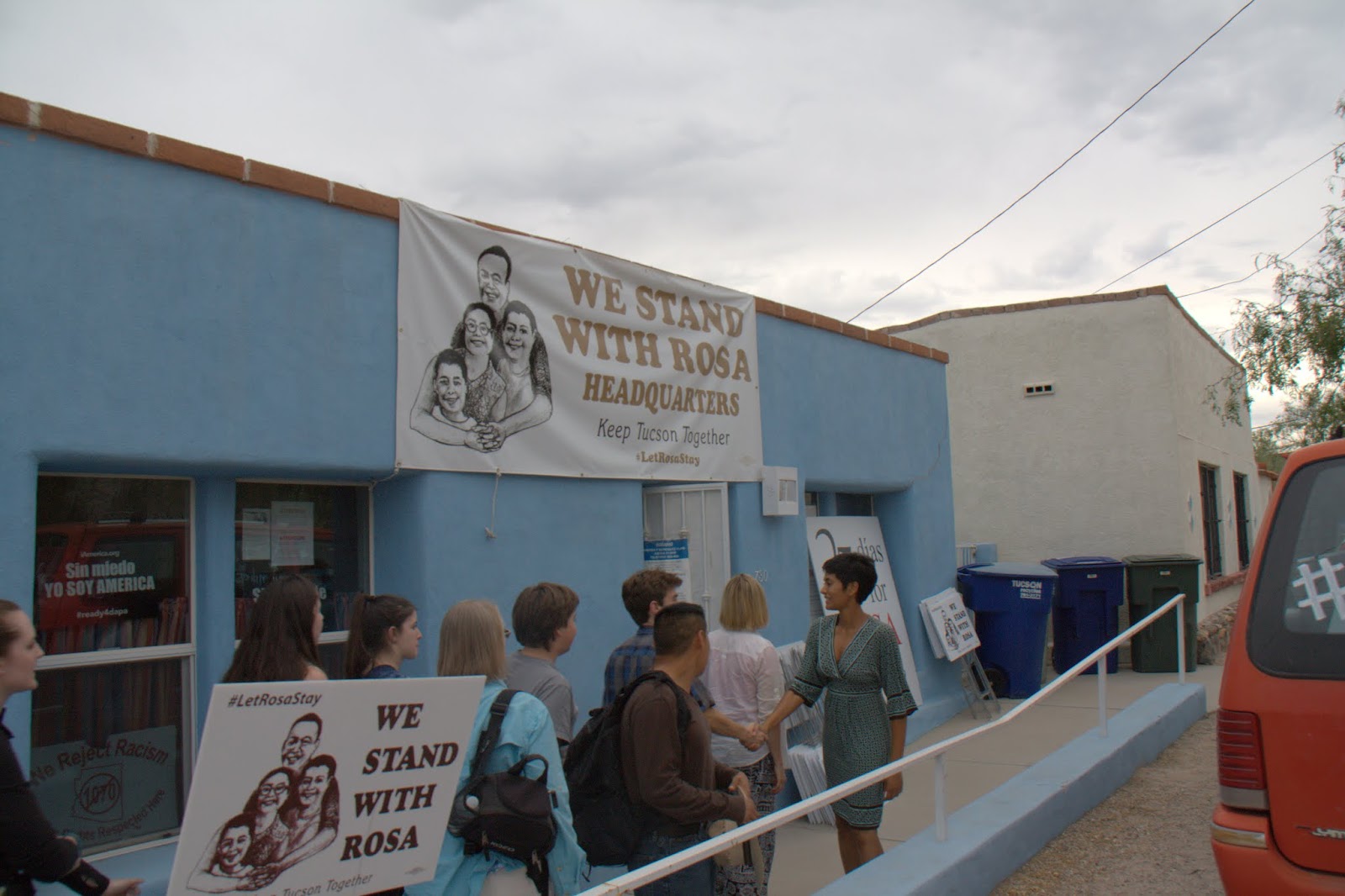 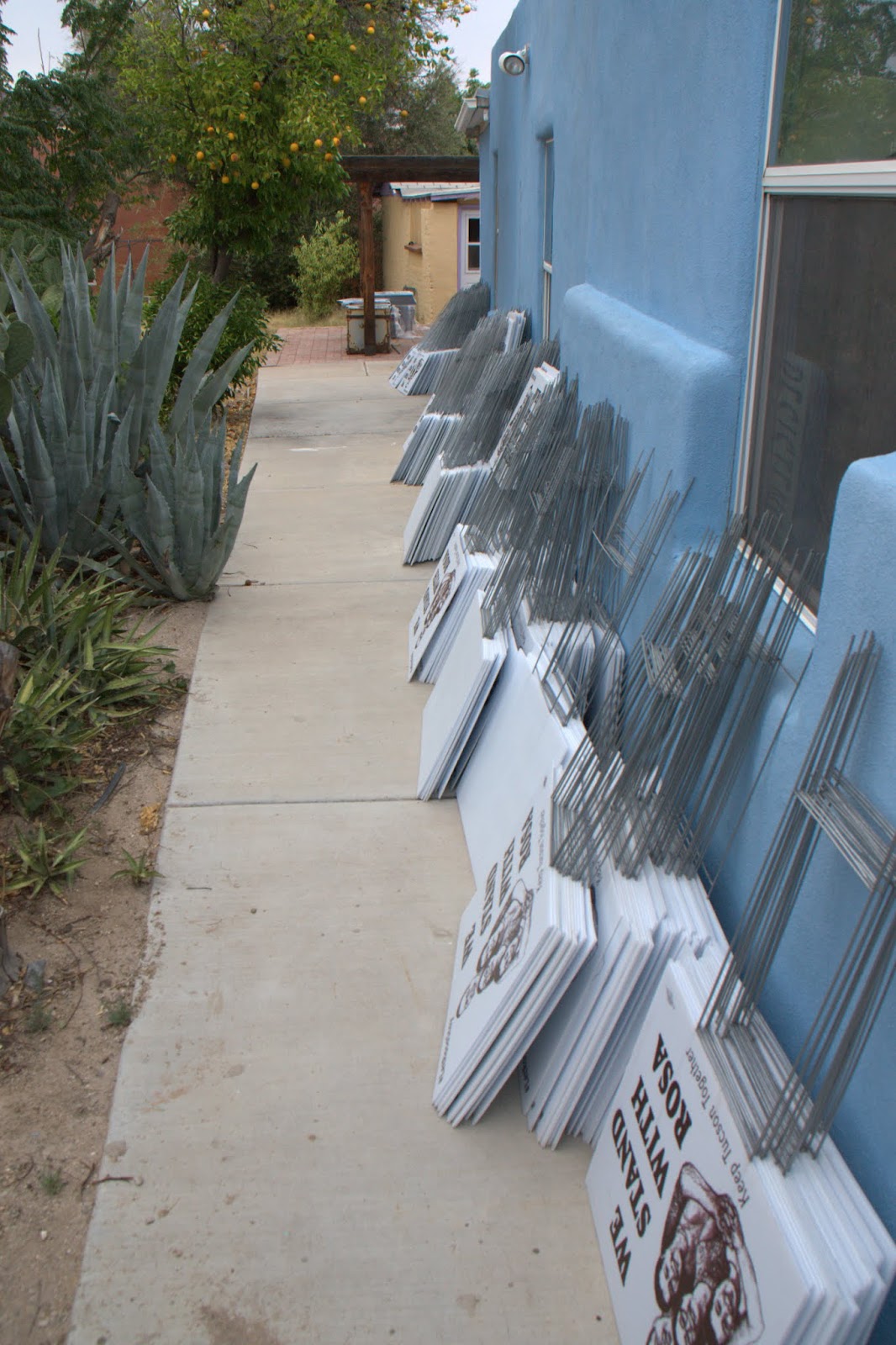 After meeting with Rosa, we met with her lawyers and helped make signs advocating for her, in honor of her one year in sanctuary. Her legal team was working hard to create some motion in her case, hoping that with enough signs and community support, the right person would make the decision to close her deportation order. It has worked for them before in other cases, although so far, not for Rosa.

While we were there, I met an activist who asked what our group’s story was. I told her I’m an architectural designer who’s interested in the ethical aspects of architecture. She was curious about what that could be, since she knew another architect who seemed uninterested in the kind of activist work that she did. I described my understanding of how architecture can be used for good, or for bad ends – think of prisons that are used unjustly to incarcerate large numbers of low-level offenders, especially young Black men, or the border wall used to divide families. I asked her about the Mariposa Land Port of Entry, which was recently featured in Architect magazine. She noted that while it’s much better than what was there before, it still treats pedestrians like criminals, forcing visitors to walk through caged areas. (We didn’t get to visit it ourselves, so I can’t confirm for myself, and the GSA doesn’t share the floor plans, for “security reasons.") I think she was surprised to consider buildings in this way, and said she would share these ideas with her architect friend. I hope she does; I think more architects need to be activists in our involvement in which buildings get built, since they are such major expenditures of our capital, talent, and resources. I hope I can help more people to think about the ethics of architecture in this way.

To be continued in Part II.

Want to take action? Here are few things you can do: