On the Border: Part III

After an uncomfortable night on the floor, we crossed into Mexico to visit several organizations working with migrants on the Mexican side of the border. The trip across the border into Mexico took no time at all. Immediately on the other side, we stopped at the Migrant Resource Center (Centro de Recursos para Migrantes), which assists people who have been repatriated by Border Patrols; warns against trying to cross the desert and the hazards there; and helps people return to their homes elsewhere in Mexico. The workers at the Center told us that lately there have been fewer people trying to cross due to the relatively weak economy, but even while we were there, a woman came in to get help. The Center documents abuses by Border Patrol during deportation proceedings (lack of medical attention, taking of identification or belongings, violence, etc) and liaises with other organizations to provide comprehensive services for migrants. The tiny center is doing what it can to stand up to a big problem, since many times, people who are deported back to Mexico are not from anywhere nearby, and have no idea how to return home or where to go after deportation. 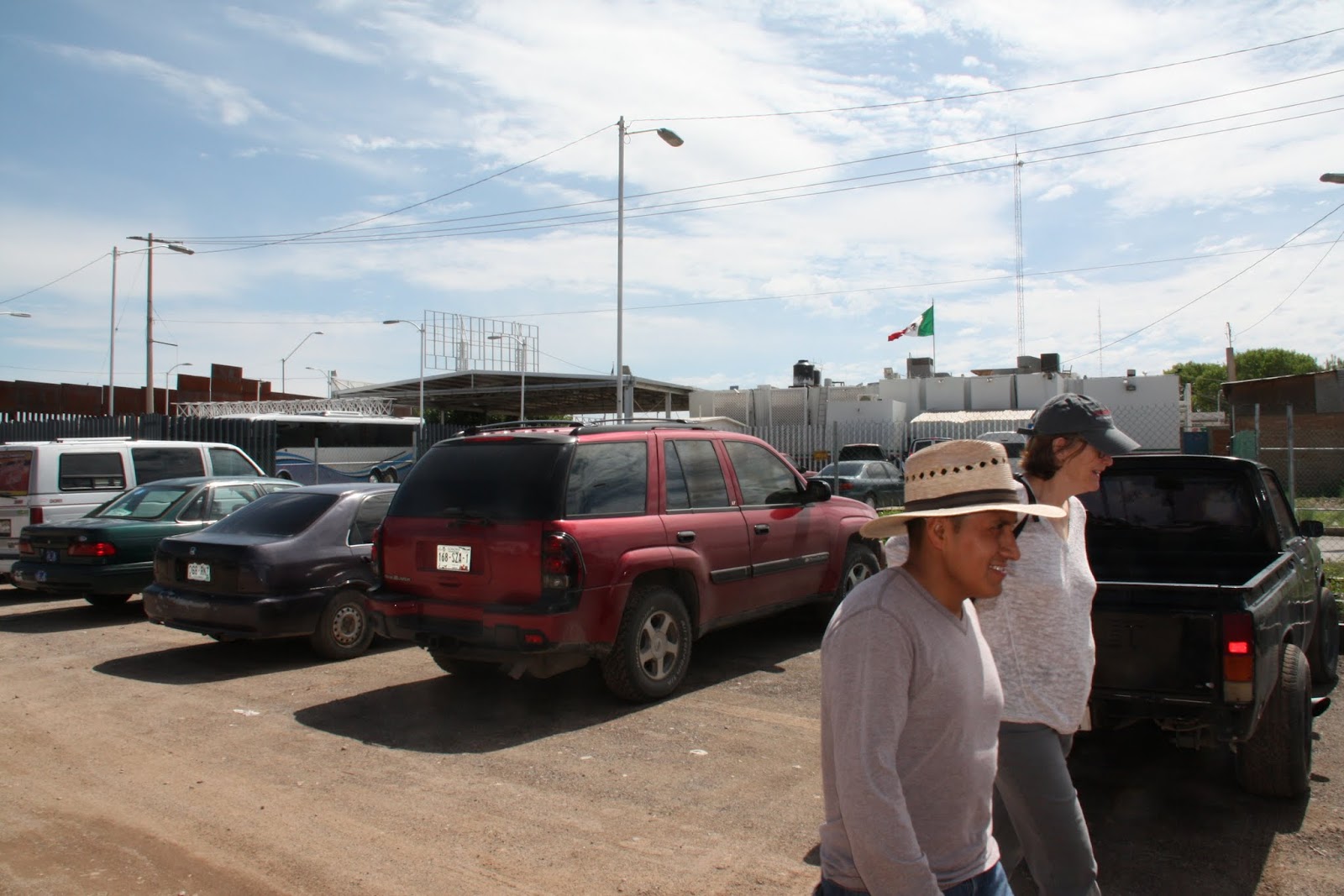 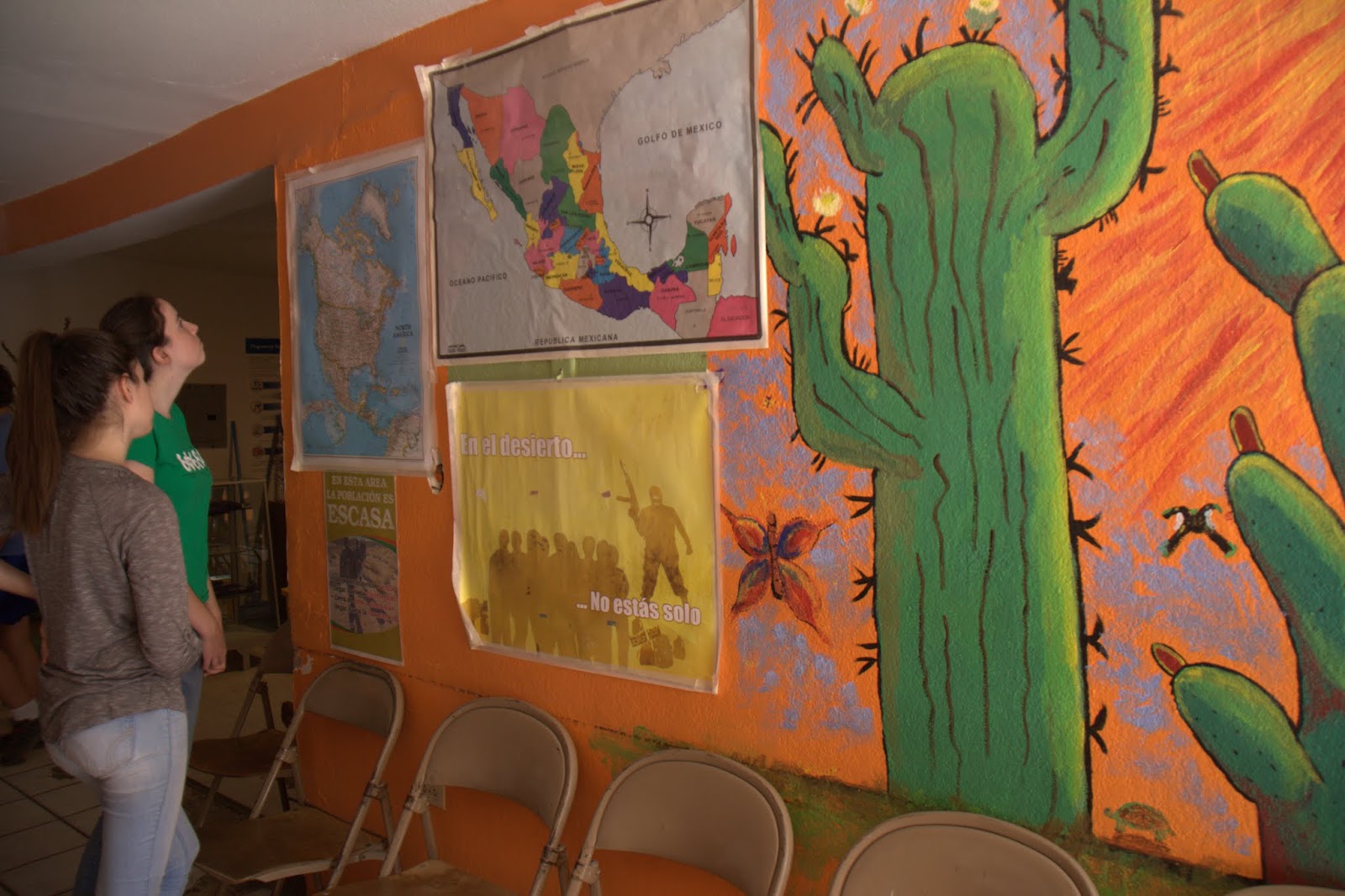 Our next stop was DouglaPrieta Works, a co-op founded by a Presbyterian group. Nine families work in the co-op, which farms vegetables, chicken, and rabbits, and teaches sewing and other skills to bring additional income. The co-op farmstead and the neighborhood around it reminded me of towns I had seen in Guatemala: dirt roads and floors, abandoned tires and trash, and improvised building materials. It’s hard to believe this level of poverty is right across our border – the lack of adequate municipal services (trash collection and infrastructure repairs, for example) was obvious. The families in the co-op strive to achieve a better standard of living for their members despite living in a place where the major employers are factories that pay the equivalent of $8 per day. We had lunch at the co-op main building and then the women of the organization led us on a tour around the farm. The women spoke about the empowerment they felt at being able to contribute to their families' income by farming and producing sewn items for sale; they had a variety of clothing and decorative items from the sewing efforts. While we were there, a painter was creating a mural above the front door – every aspect of the co-op is created and cared for by the group. 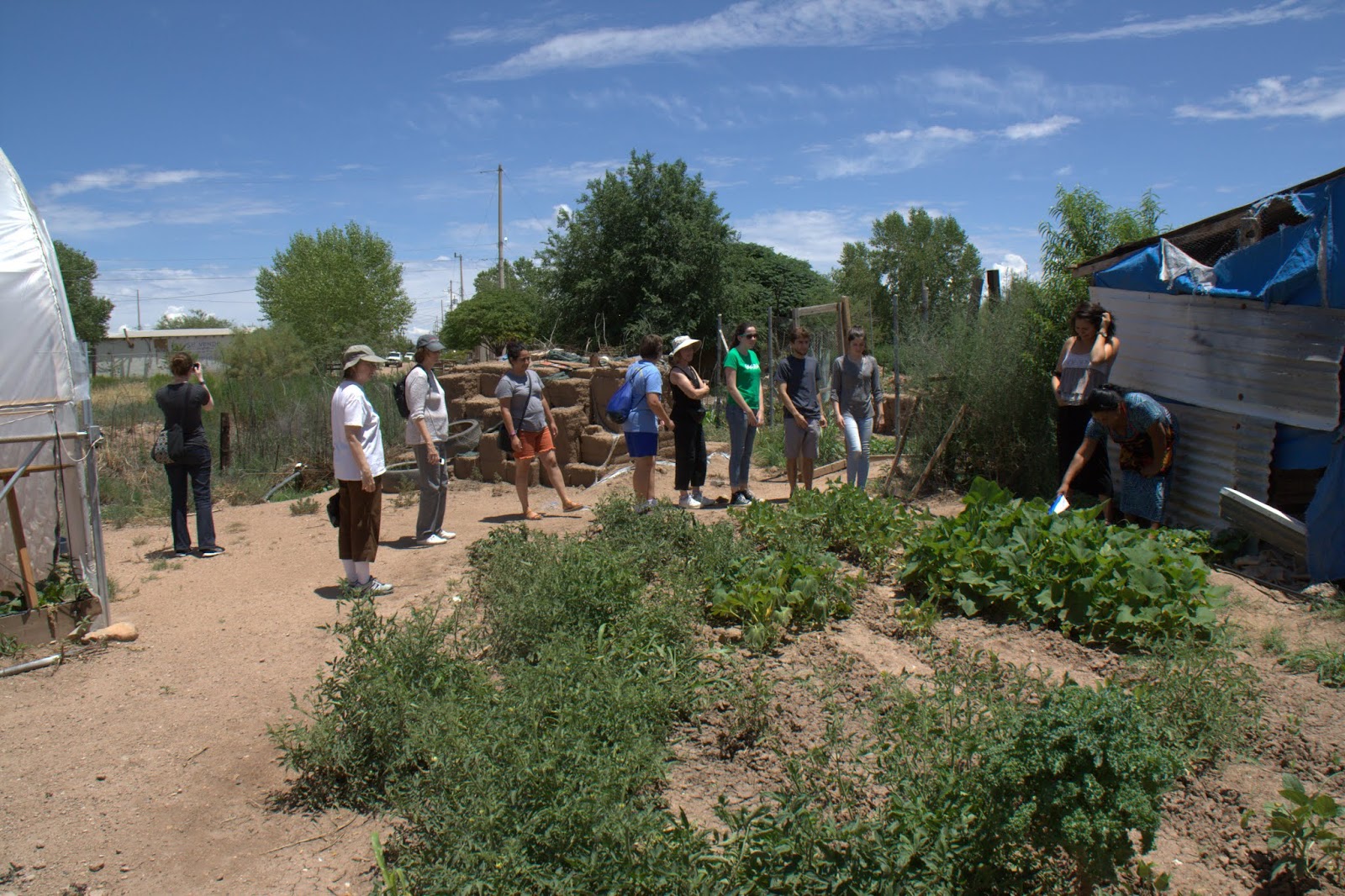 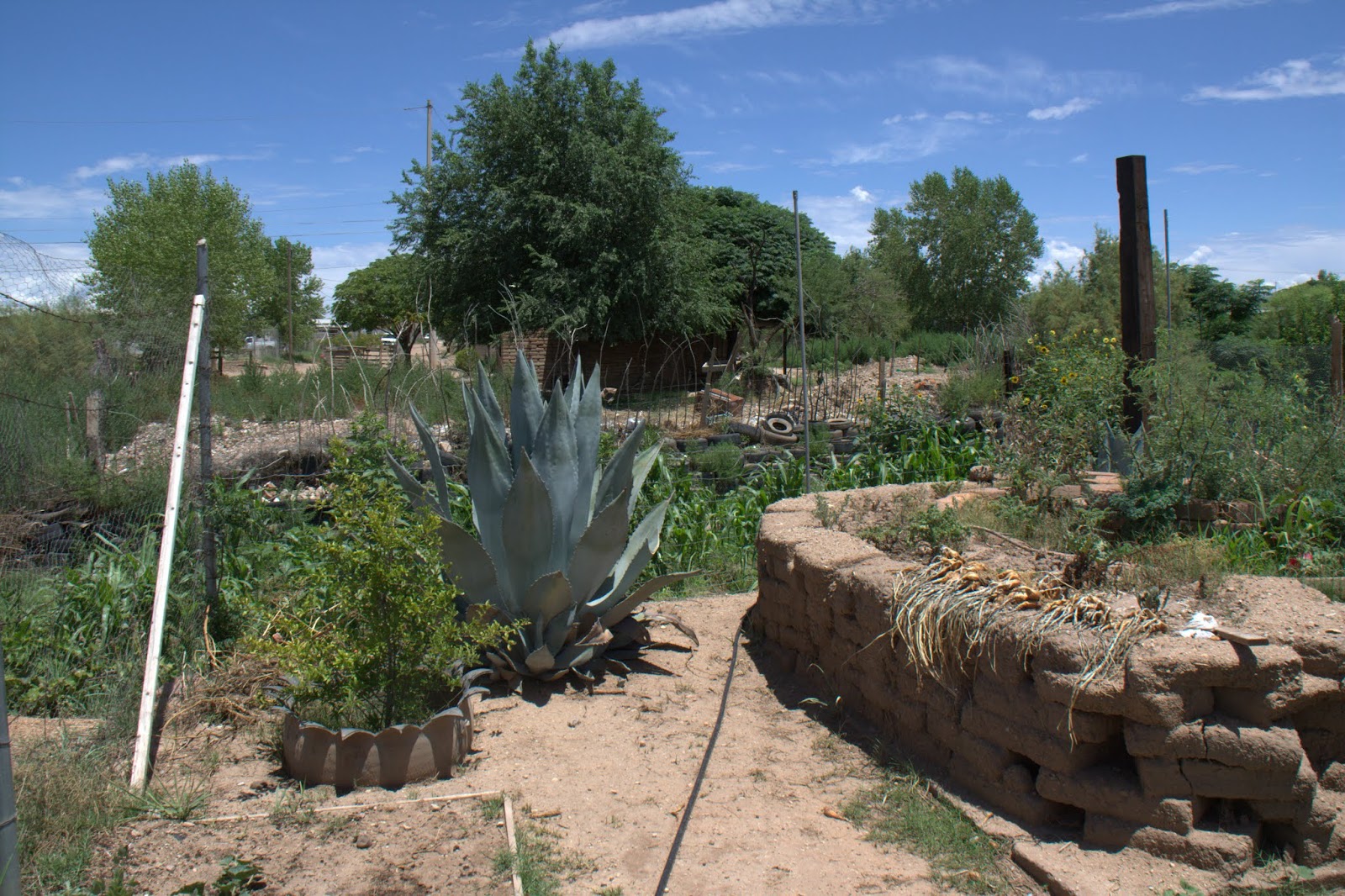 After lunch and the farm tour, our next stop was at Cafe Justo (Just Coffee), a coffee co-op again started with assistance from a Presbyterian group, this time using a micro-loan. The co-op is run by a family which originally wanted to move to the US, but decided they could do more good by staying in Mexico and partnering with other families to produce coffee for export. Forty families in the state of Chiapas (a major coffee-growing region in Mexico) grow the coffee which is then roasted, packaged, and exported from the facility in Agua Prieta. Controlling the entire production process allows the co-op to capture most of the value of the coffee, which otherwise goes to the exporter (and to Starbucks). Their coffee is thus Fair Trade certified, as well as organic, and smelled so good, even to this non-coffee-drinker! Unfortunately for me, they only sell coffee (it is, after all, “just” coffee) so I didn’t buy anything there. The workers explained that by running their co-op they could provide living wages to all the families involved, so that they could remain in their homes and avoid having to move away to seek work. We toured their production facility and shop. A new coffee shop was under construction, where they hoped to be able to employ local youth and provide a safe place for them to gather off the street. 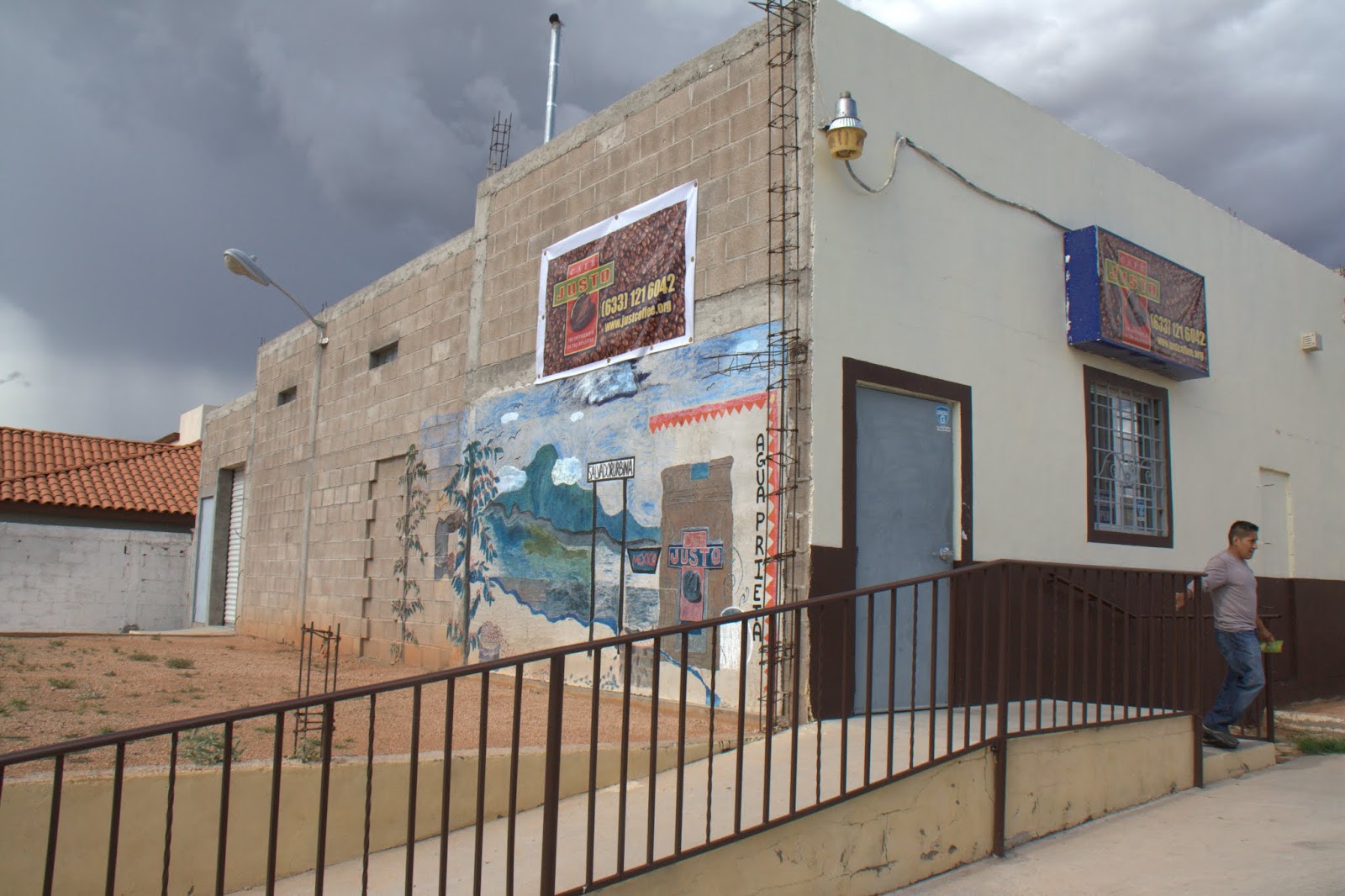 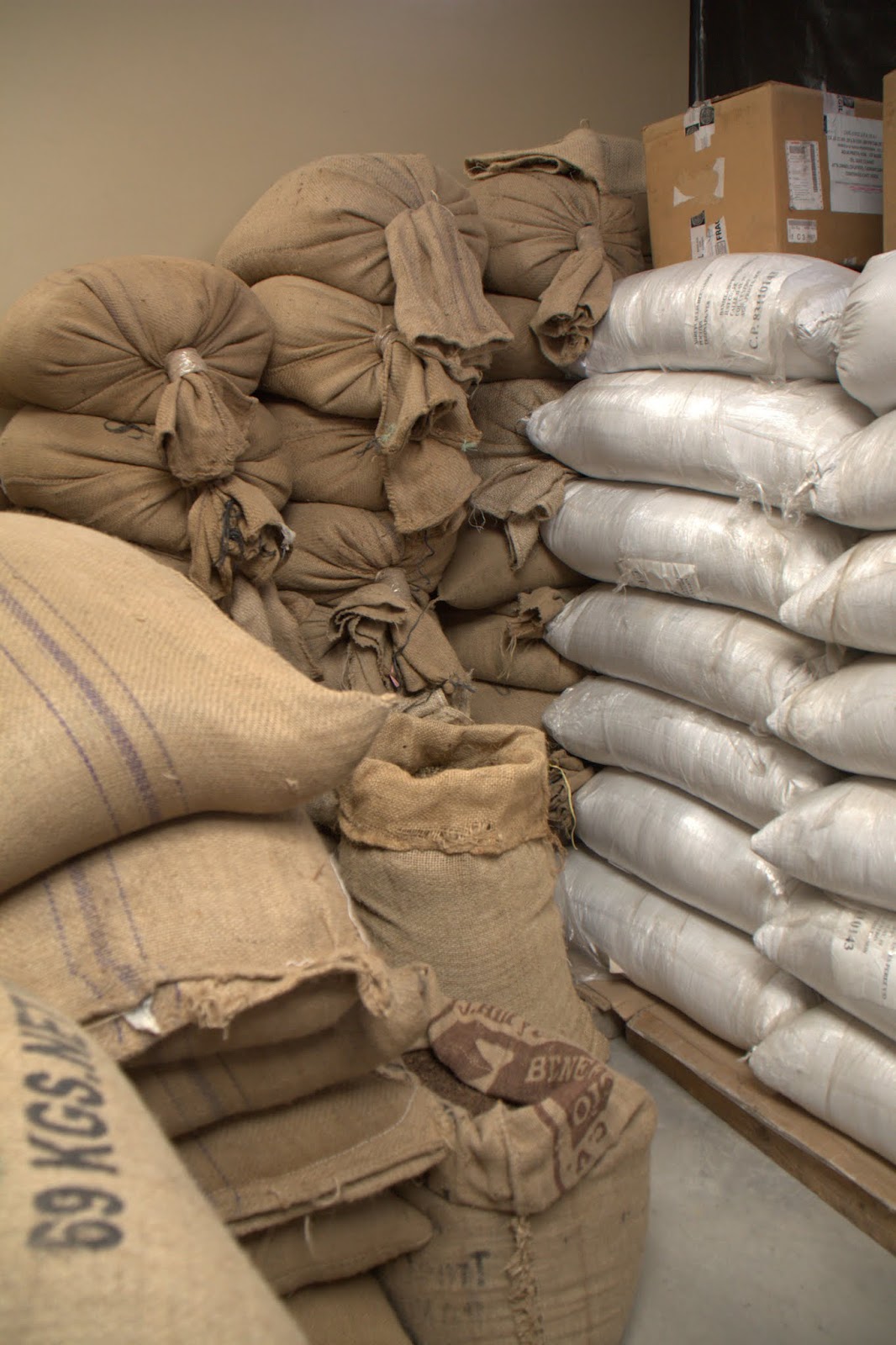 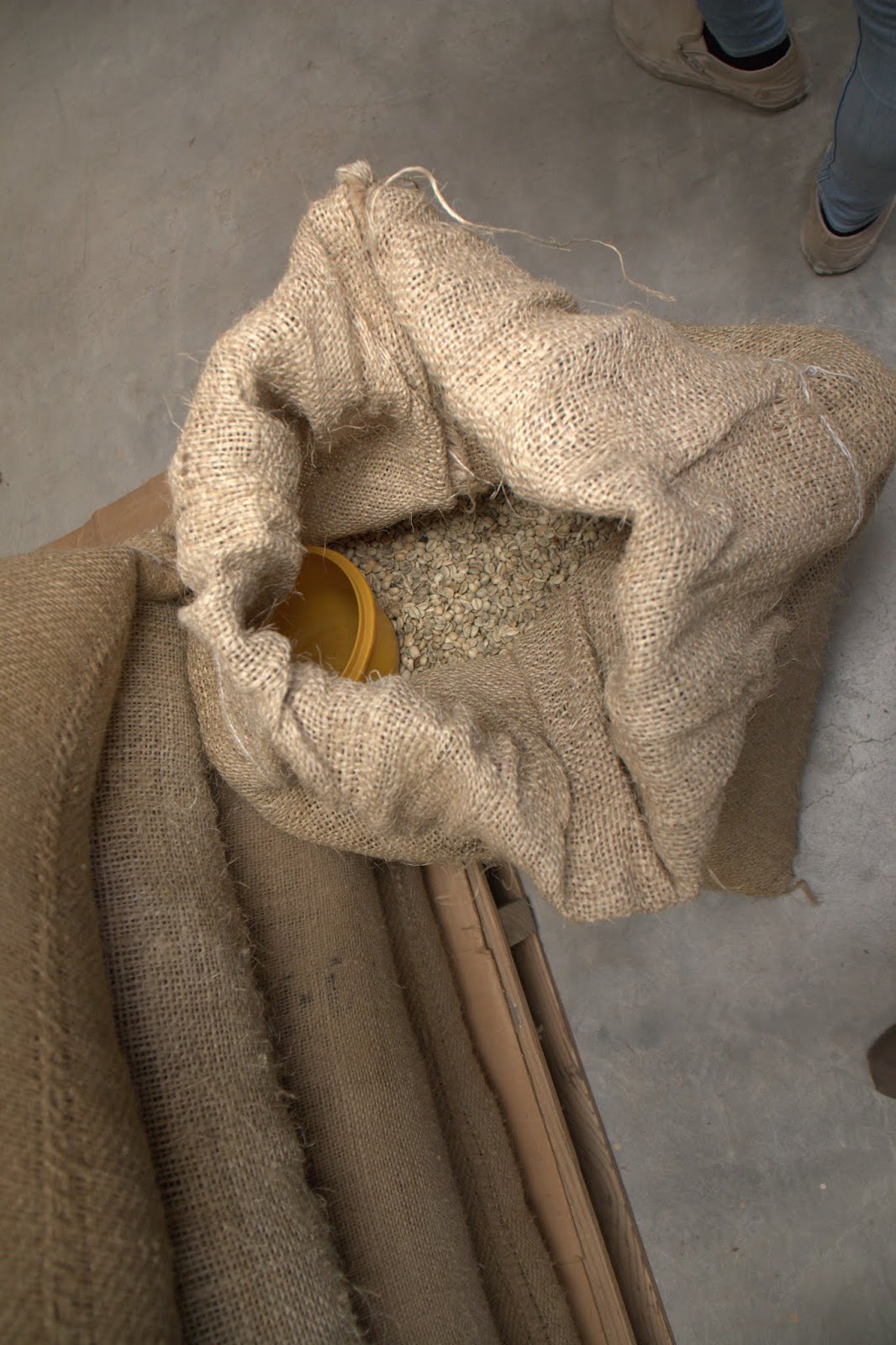 Before heading back to the US, we stopped on the Mexican side of the border wall. By chance, we encountered a woman who was visiting the shrine of her 16-year-old nephew who had been killed by Border Patrol on the Mexican side of the border. She told us that her family was trying to sue in the US for justice and invited us to an event happening later that week. We had to decline due to our schedule. She was grateful to know that there are people like us who are trying to educate ourselves about the violence at the border so that her nephew is not forgotten. We were all thankful for the chance to have met her and to hear from someone directly touched by the conflict. Looking around, the houses along the border street appeared militarized, with tall fences, gates, shrubs, and trees blocking any view from the wall; it must be incredibly difficult to live along that road, with the ever-present possibility of gunfire when the Border Patrol pursues a suspect. It’s hard for me to imagine living in a place where a teenager could be shot on your doorstop at any time. 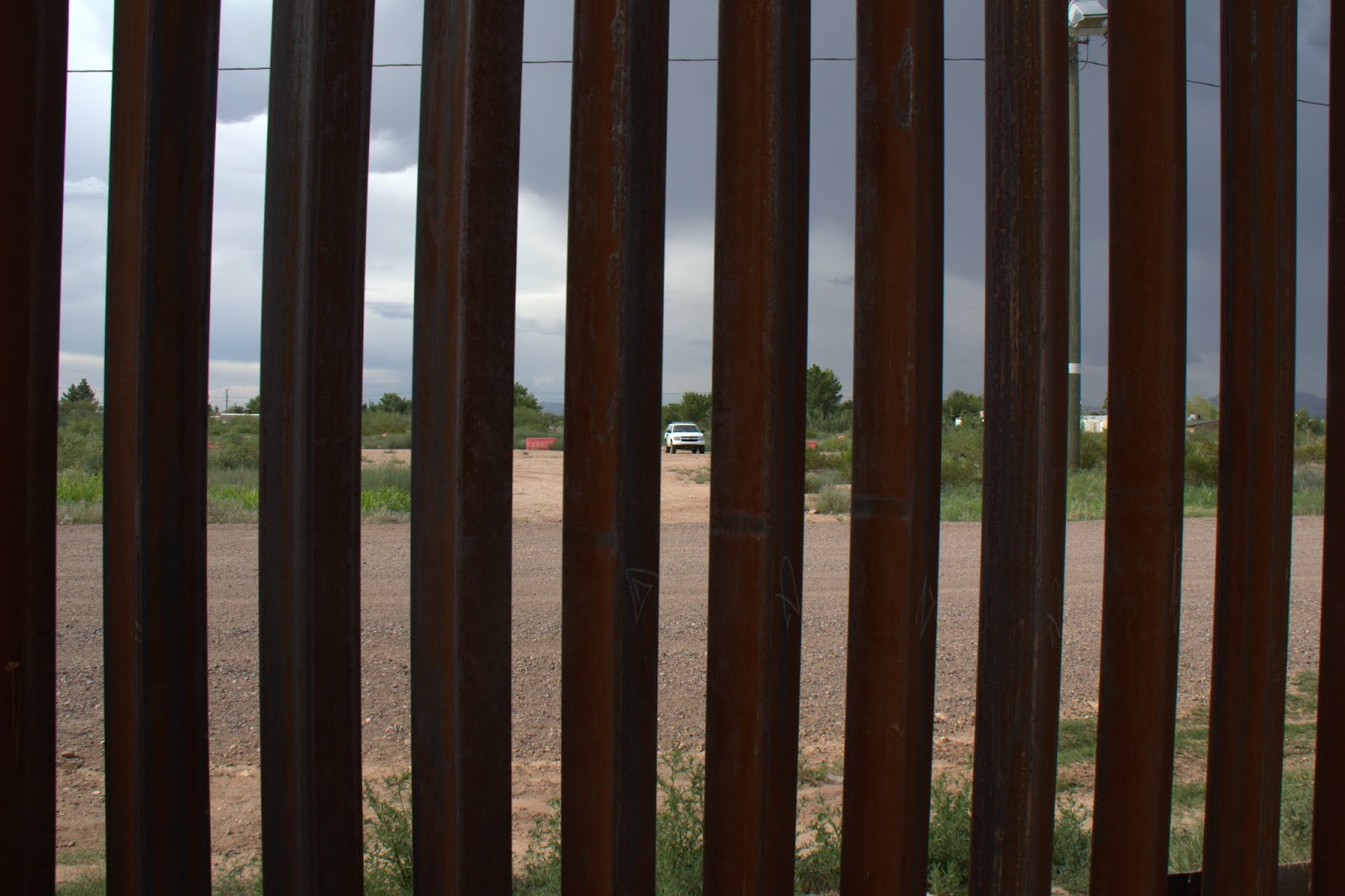 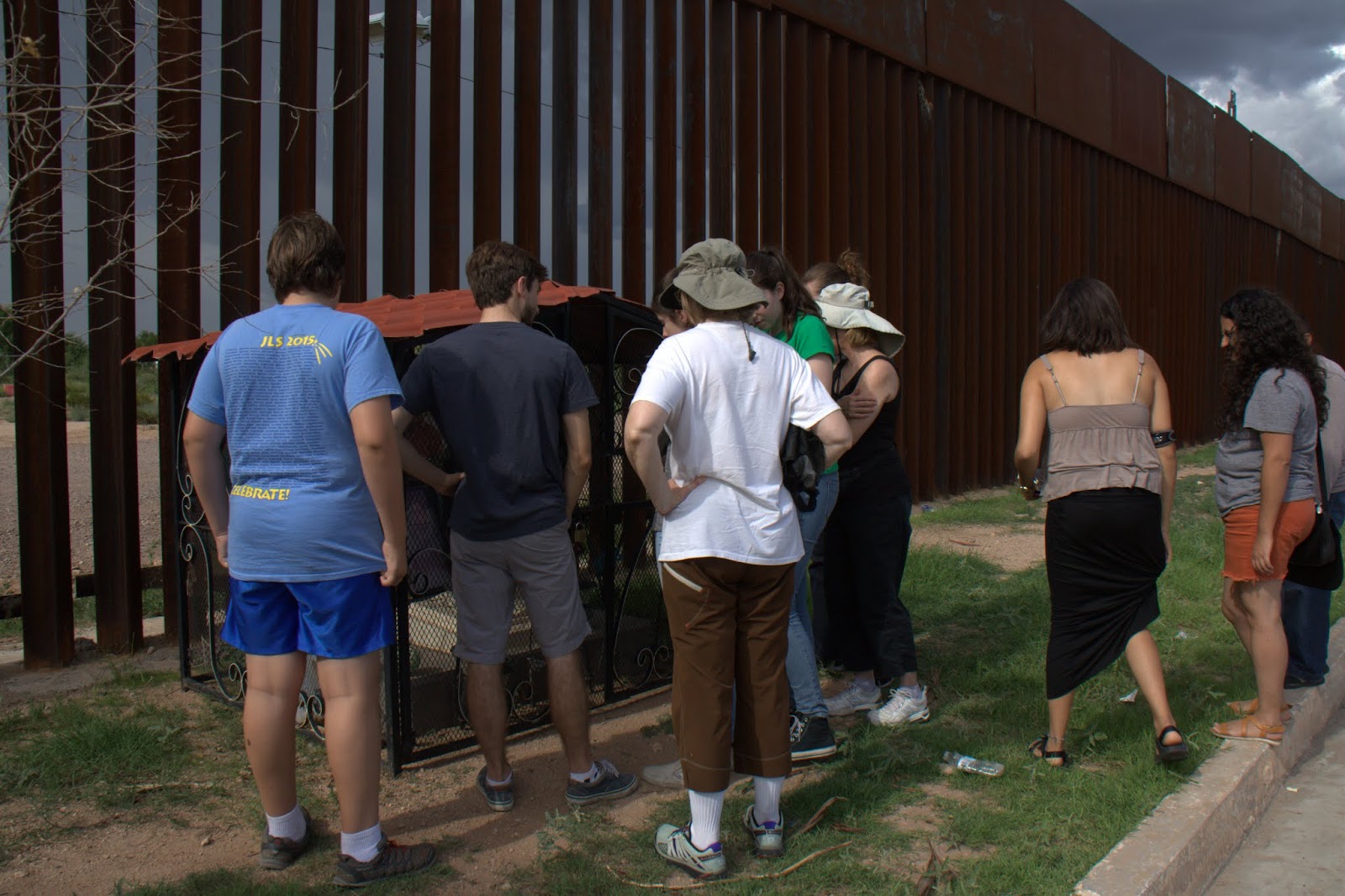 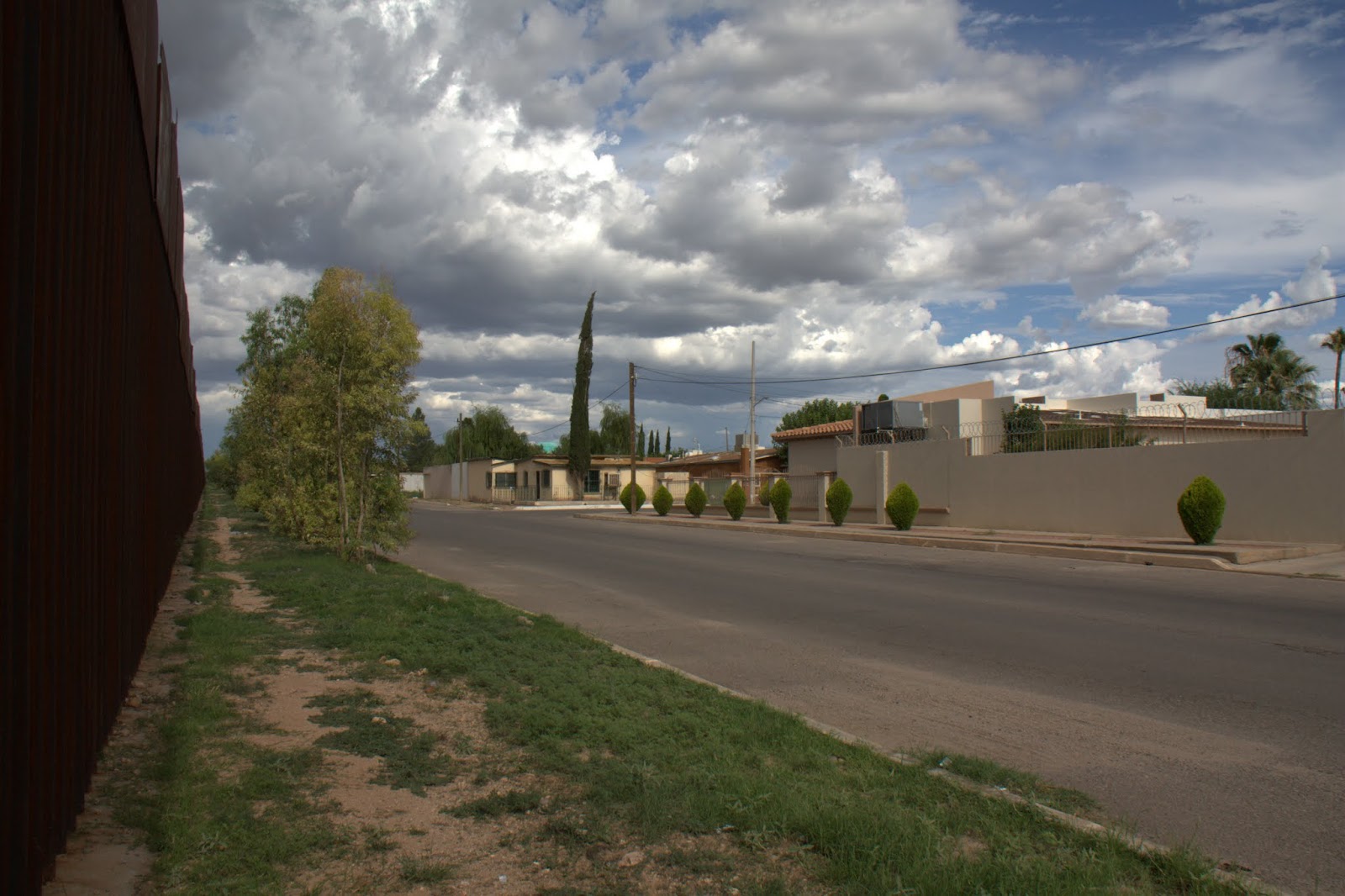 Back across the border we went, which took much longer than the trip over, as US Customs inspected our passports and vehicle. We returned to BorderLinks and readied ourselves for the next day.

To be continued in Part IV.

Want to support the organizations we visited?