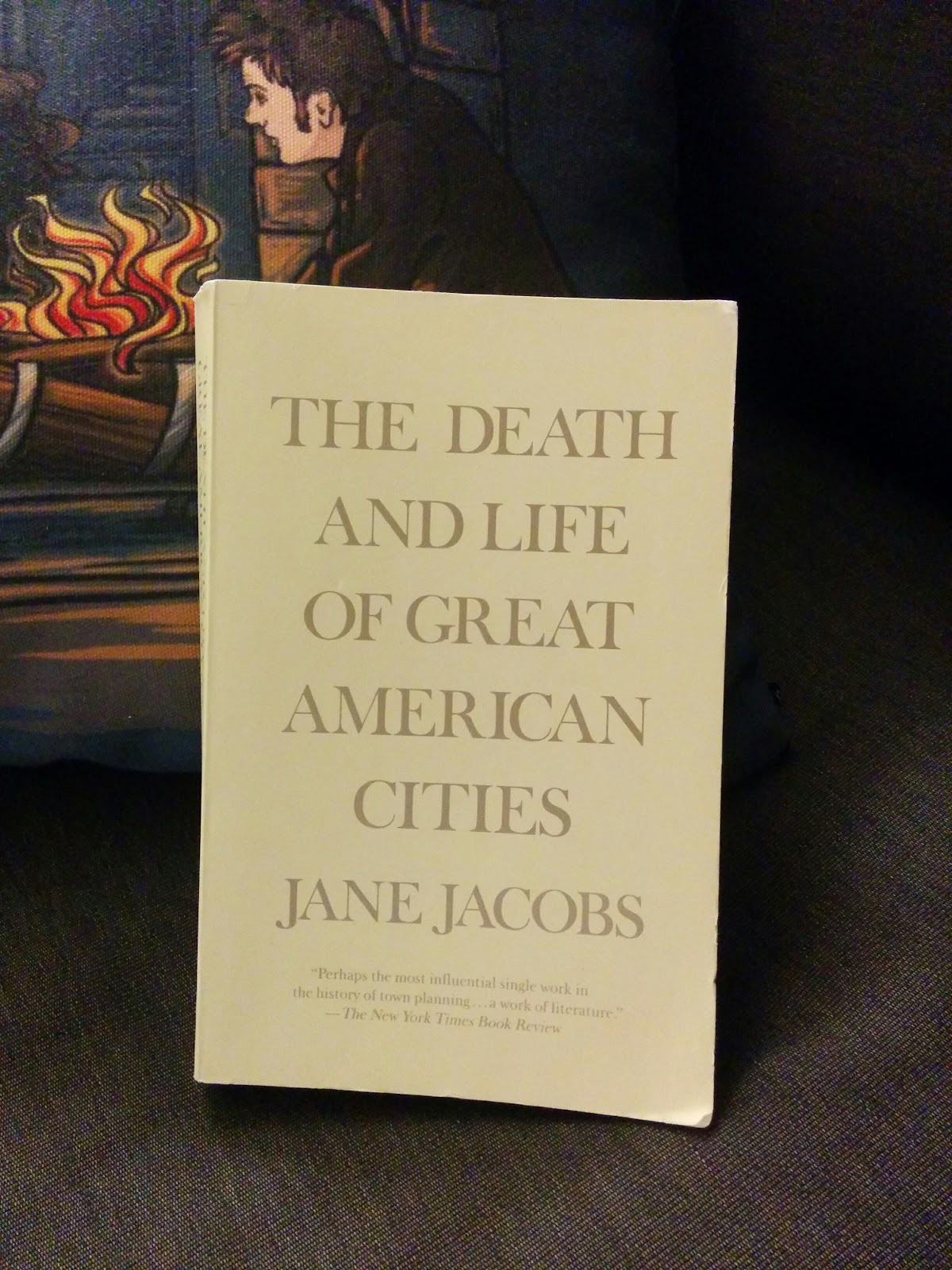 The Death and Life of Great American Cities (1961) by Jane Jacobs is a classic of urban planning and urban design, and I really have no excuse for getting around to reading it so late in the game. I knew about it for ages, knew everyone quoted Jacobs whenever possible, and yet it took me until I was about to teach an introductory class on architecture & urbanism to get a copy for myself. I finally finished it and definitely recommend it. It’s fascinating both for her foresight to what was coming in city planning, and her recognition early on of the factors and problems that we’ve taken decades to face in the academy. Her understanding of cities was deep, built on personal experience, research, and speaking with planners, city officials, and academics. Without formal academic training in urban design, which at the time was focused on then-radical theories of superblocks, towers-in-the-park, and “urban renewal” (neighborhood-scale building demolition to make way for megaprojects), Jacobs was apparently considered a fringe voice until the last twenty or thirty years. Jacobs died in 2006, and now has a “Jane Jacobs Day” in both New York and Toronto, where she lived the latter part of her life.

Her descriptions of New York City life are magnetic and lovely. Her phrases are often intentionally humorous, and always down-to-earth, accessible, in a way that no architectural theory book I’ve ever read has been. She speaks lovingly about her neighborhood in Greenwich Village and about the North End in Boston. She also mocks the orthodox, modernist planning theories of the 1930s-60s as being just variations on a theme, calling them collectively the “Radiant Garden City Beautiful.” Her special target is public housing projects, in the specific guise of towers-in-the-park, which she sees as soulless, dead spaces. A few choice excerpts:

“This is the most amazing event in the whole sorry tale [of the history of orthodox city planning]: that finally people who sincerely wanted to strengthen great cities should adopt recipes frankly devised for undermining their economies and killing them.” (21)

“The idea of sorting out certain cultural or public functions and decontaminating their relationship with the workaday city dovetailed nicely with the Garden City [Ebenezer Howard, 1902] teachings. The conceptions have harmoniously merged, much as the Garden City and Radiant City [Le Corbusier, 1930s] merged, into a sort of Radiant Garden City Beautiful, such as the immense Lincoln Square project for New York, in which a monumental City Beautiful [Burnham, 1890s] cultural center is one among a series of adjoining Radiant City and Radiant Garden City housing, shopping and campus centers.” (25)

“To say that cities need high dwelling densities and high net ground coverages, as I am saying they do, is conventionally regarded as lower than taking sides with the man-eating shark.” (218)

“The best than can be said of [government-run public housing] is that it did afford a chance to experiment with some physical and social planning theories which did not pan out.” (325)

The book is divided into sections of different focus: the first part, on descriptions of city life and activity; the second, on the importance of diversity in cities (including diversity of functions, buildings, etc); the third, on her analysis of how cities suffer and decline; and the fourth, on “tactics” for addressing these forces of decline. As a proponent of density and diversity, and also as an advocate for residents' rights to fight unwanted changes to their neighborhoods, Jacobs was prophetic. There are many NIMBYs who owe their thanks to Jacobs for her groundwork on how neighborhoods can fight top-down city planning. This strategy today has a mixed legacy, as I’ll discuss in my next book review, which focuses on Los Angeles instead of New York.

While much of her book is still timely and useful, there were a host of urban problems she either failed to address or to forsee. She was not all-knowing, after all. Two good treatments are here (Edward Glaeser, urbanist / economist) and here (Nicolai Ouroussoff, former architecture critic for the NYTimes). And yet, I am the kind of person who thinks reading the primary sources is a good idea, and this book provides the context for ongoing debates in urban design. A critical reader should also remember Jacobs' own context, which was amid major government-sponsored projects that we no longer have the public funds or support to create. Lack of government muscle behind infrastructure projects is one of today’s critical problems, quite opposite from what Jacobs experienced. Balancing necessary major infrastructure projects with sensitive incremental infill in cities is a delicate act indeed, and Jacobs would surely agree.

For architects and planners, this is a must-read.