In May, I had the opportunity to spend a couple of days in Chicago after judging at the Odyssey of the Mind World Finals competition at Michigan State. I took the Amtrak from East Lansing to Chicago - Union Station, then the “L” (“elevated”) train the rest of the time. There was one issue when I tried to get out to the University of Chicago which involved missing a bus connection and having to be rescued by my friend, but aside from that, public transit was a breeze.

Chicago overall was a really fun city: not too big as to feel overwhelming, but with great transit around the downtown Loop area, perfect weather at the end of May, and lots to see and do. I’m already looking forward to going back. I made myself a Google map of the city with an ambitious number of places to visit, but thanks to my patient friends, I was able to check off most of the places. The others will have to wait ‘til next time. Here’s the run-down of what I was able to see.

Before I even got to Chicago, I did get to see one pretty cool building at Michigan State: the Broad Art Museum (not to be confused with the one in Los Angeles) by Zaha Hadid Architects. Opened in 2012, the museum is a lovely, compact piece that invites viewing from all sides, to the point of wondering how the art (and staff) even gets in - the loading areas are so well-integrated that the building does not feel like it has a front or a back. The art inside was not quite as impressive, although there were a few interesting pieces, including a room that appears to have a hole in it leading outside. (The hole is real, the “outside” is fake.) You might say this building has all the angles. Definitely worth a visit if you’re in the area. I think this was the first Zaha Hadid building I’ve visited. 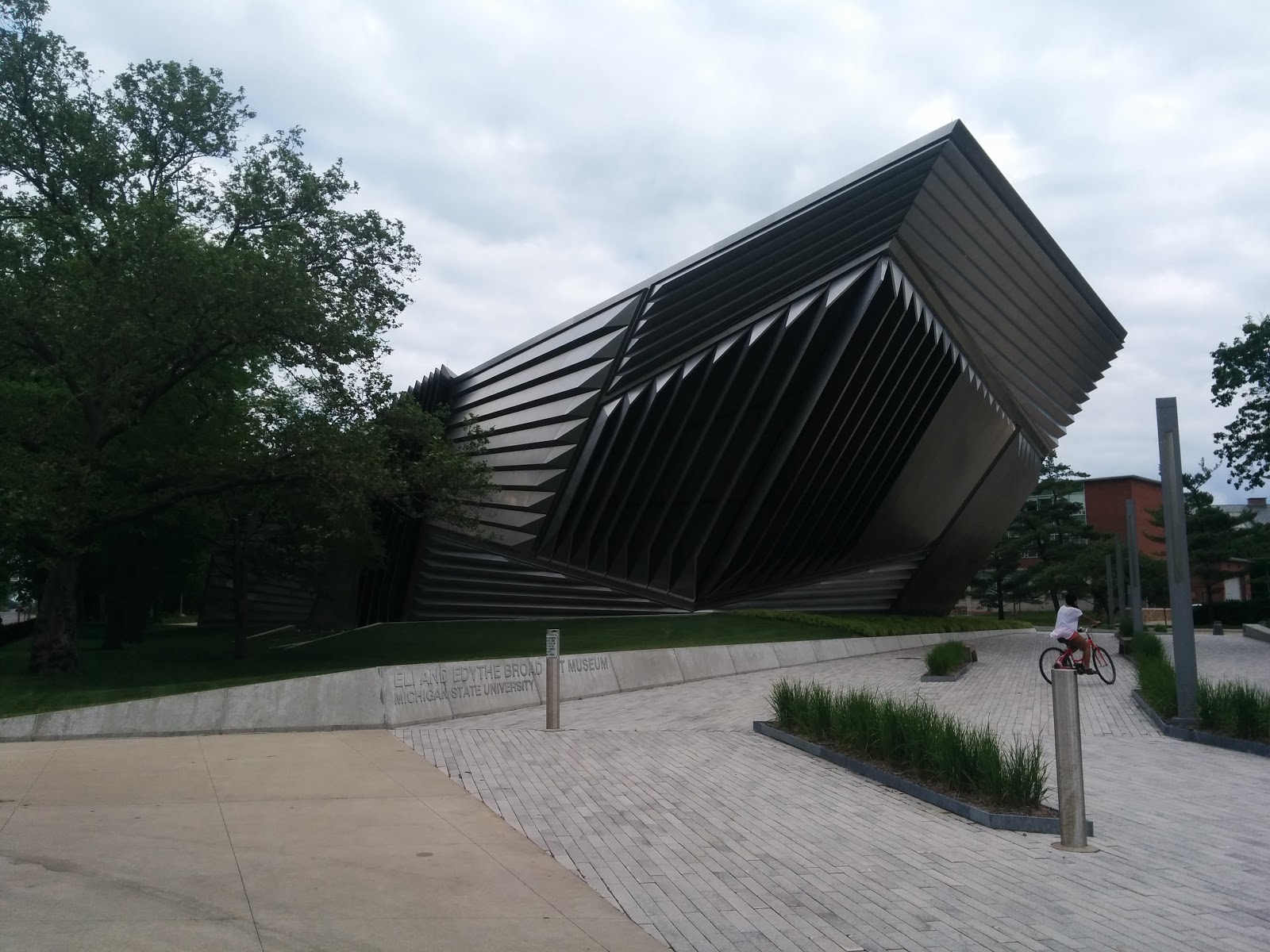 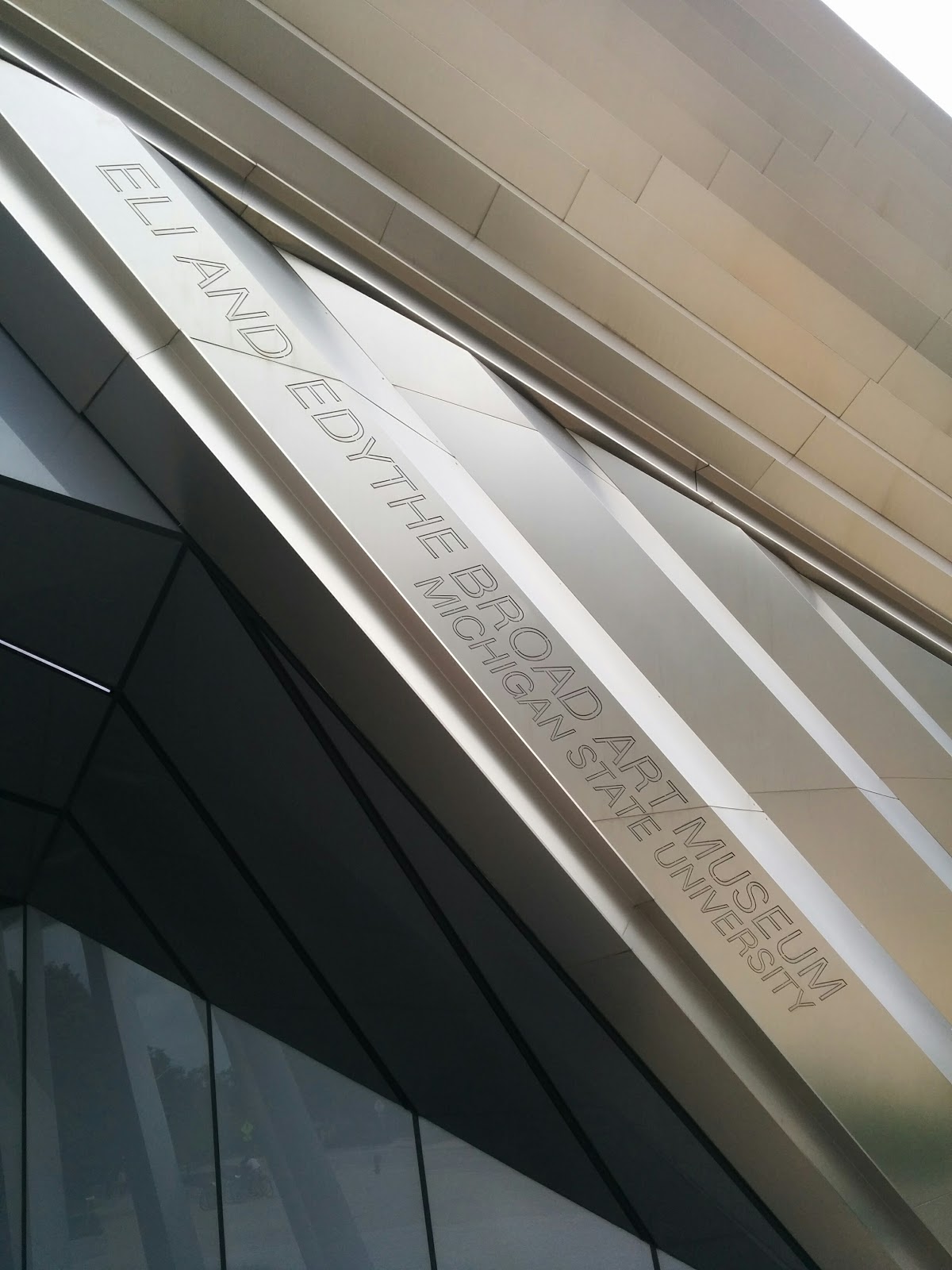 I arrived around noon and met my friends for lunch at True Food Kitchen, which was pretty good. I didn’t realize at the time that it’s a chain with a location here in Palo Alto - so maybe I’ll have to try that location too. We spent some time walking around, checking out the outside of the John Hancock tower, the Chicago Tribune tower, and Studio Gang’s Aqua tower, before getting on the boat for the Chicago Architectural Foundation’s river cruise. The sun was blasting in our eyes for much of the boat ride, but it was still great to see all the buildings from the river perspective, and the guide was entertaining. 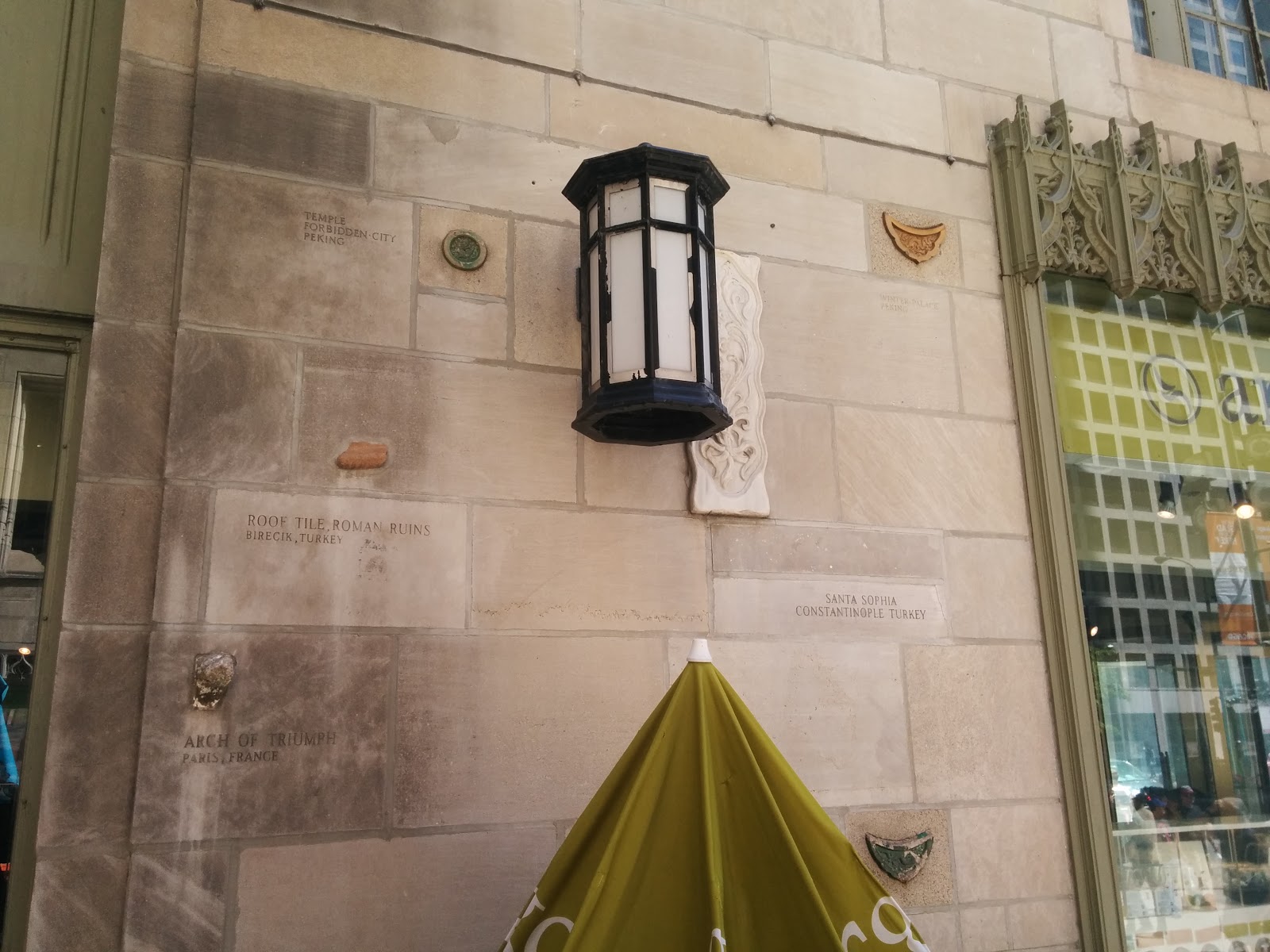 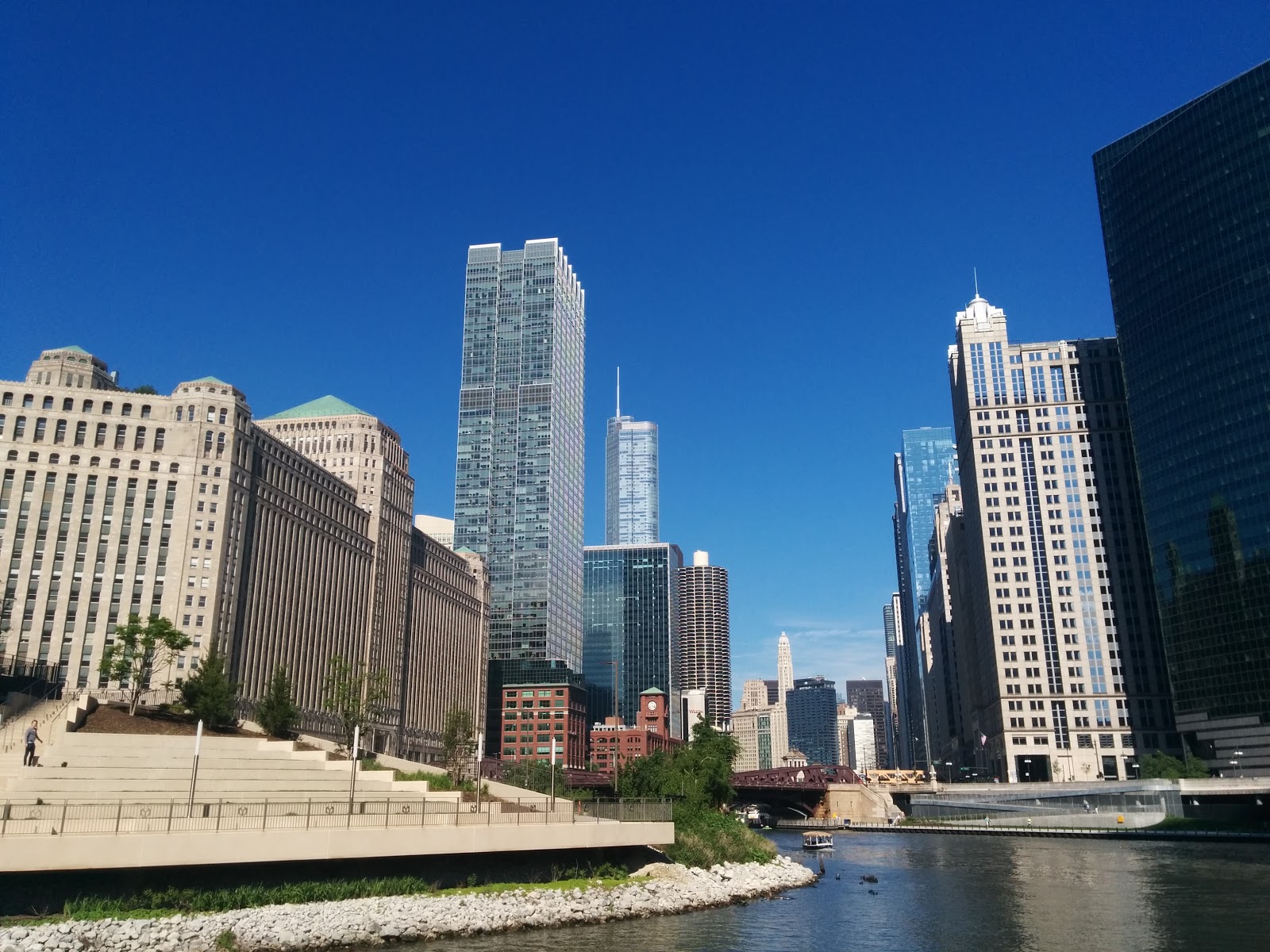 After the river cruise we wandered through Millennium Park, which is fantastic; past Grant Park; and into the West Loop to find dinner. Not in the mood to wait hours for a table at a notable restaurant, we found an upscale taco place we could walk into. After that, we wandered some more downtown, checking out Chagall’s Four Seasons mosaic, the Palmer House lobby, and the Crown Fountain before calling it a night. No photos of these, since my camera doesn’t do well at night.

This was the most ambitious day, where I started south of the city and worked my way north, with my very patient friend driving me to see random architectural sights. We started at the Robie House at the University of Chicago, after she rescued me from a highway overpass as previously mentioned. I think I’ve had just about enough Frank Lloyd Wright for one lifetime now, having visited Fallingwater, the Hanna House, Florida Southern College, and now the Robie House; the Unity Temple would have been nice, but it was closed at the time, and maybe I’d visit Taliesin West in Arizona, but other than that, I think I’m good now. The low ceilings do wear on you after a while. 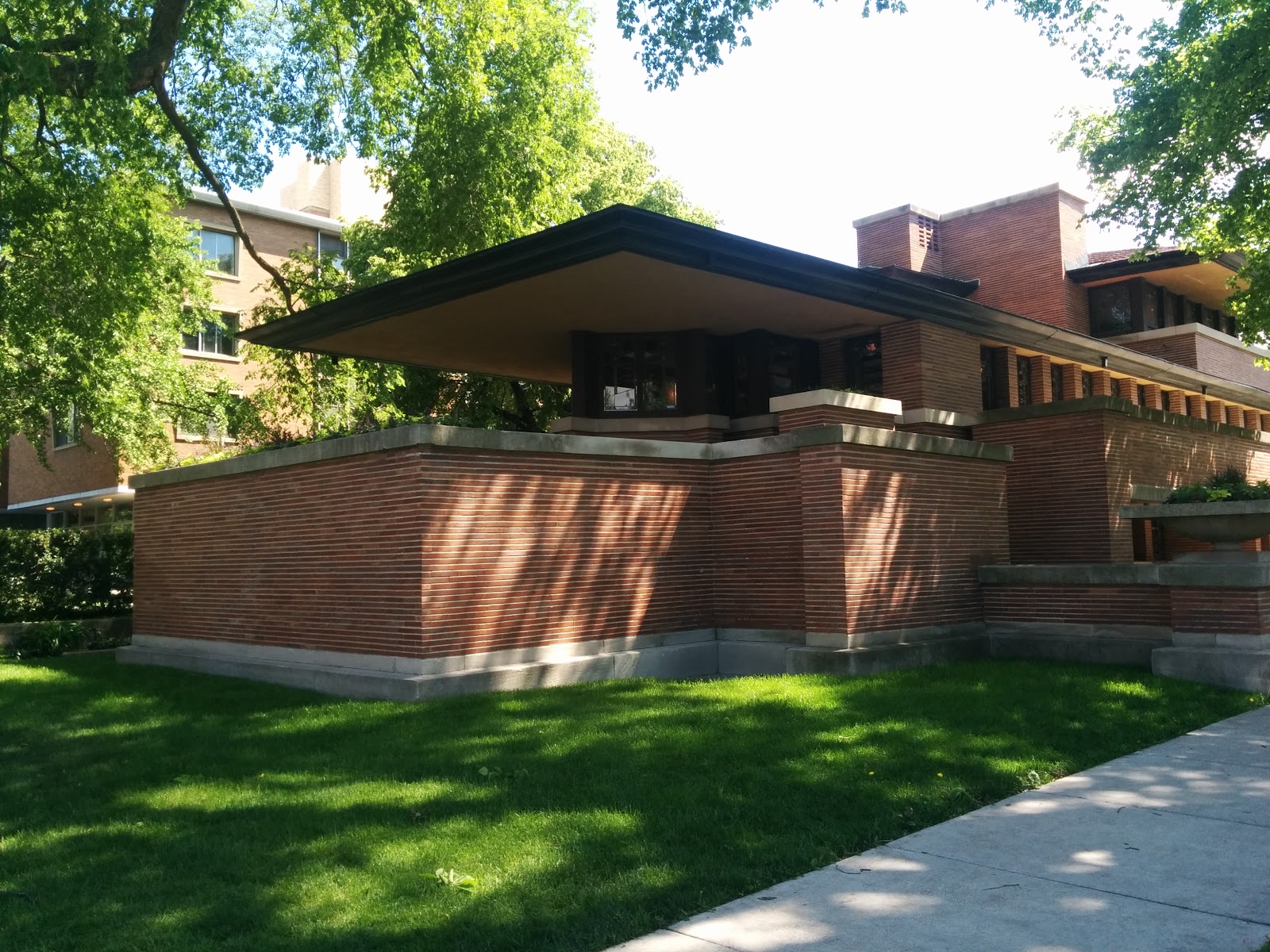 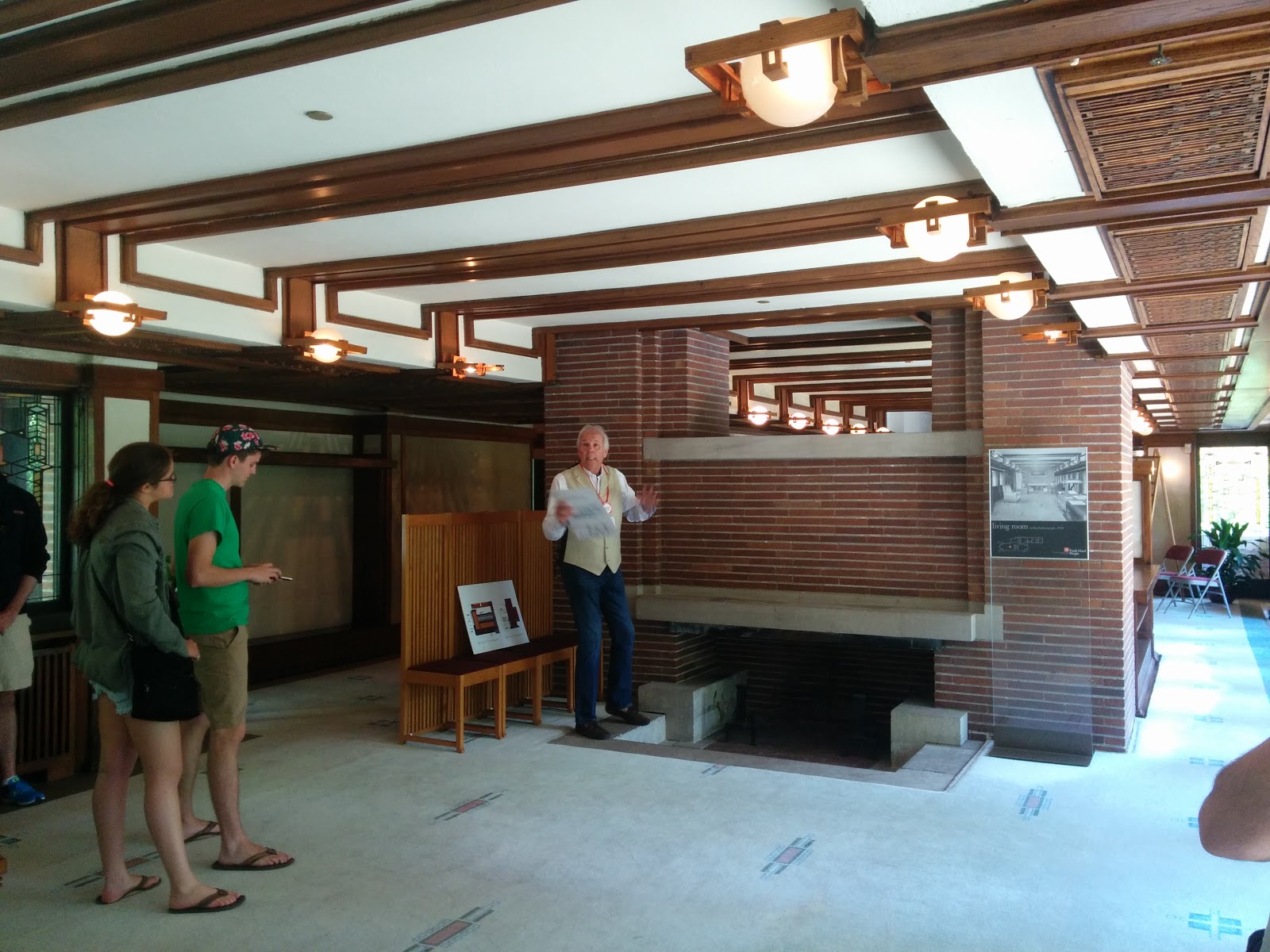 The University itself had some pretty cool buildings, including the tantalizing Mansueto Library, by Helmut Jahn, which can only be entered from the adjacent Regenstein Library, to my great disappointment. We wandered around it looking for an entrance for a while. No luck. Apparently, below the reading room are massive automated stacks. 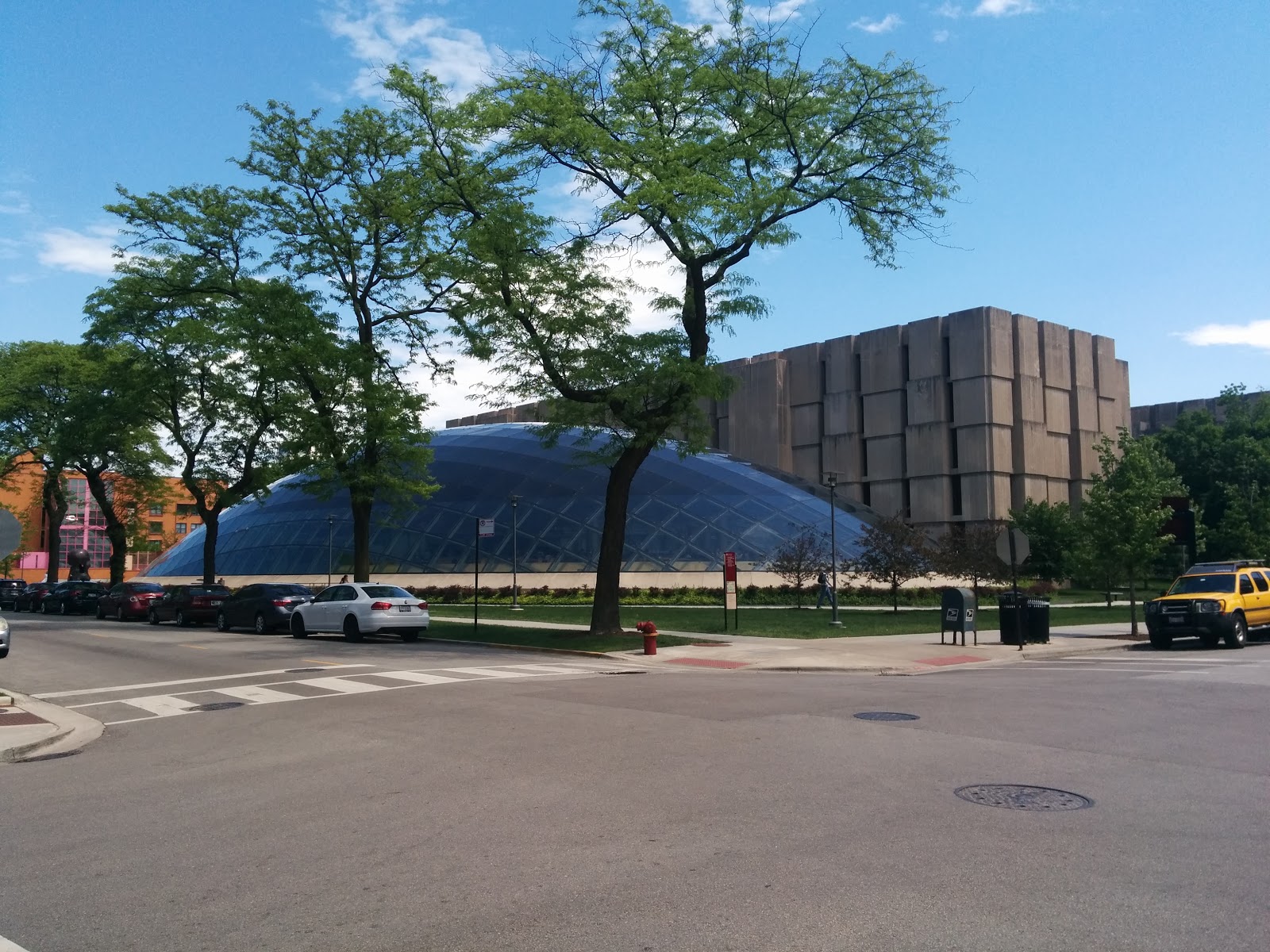 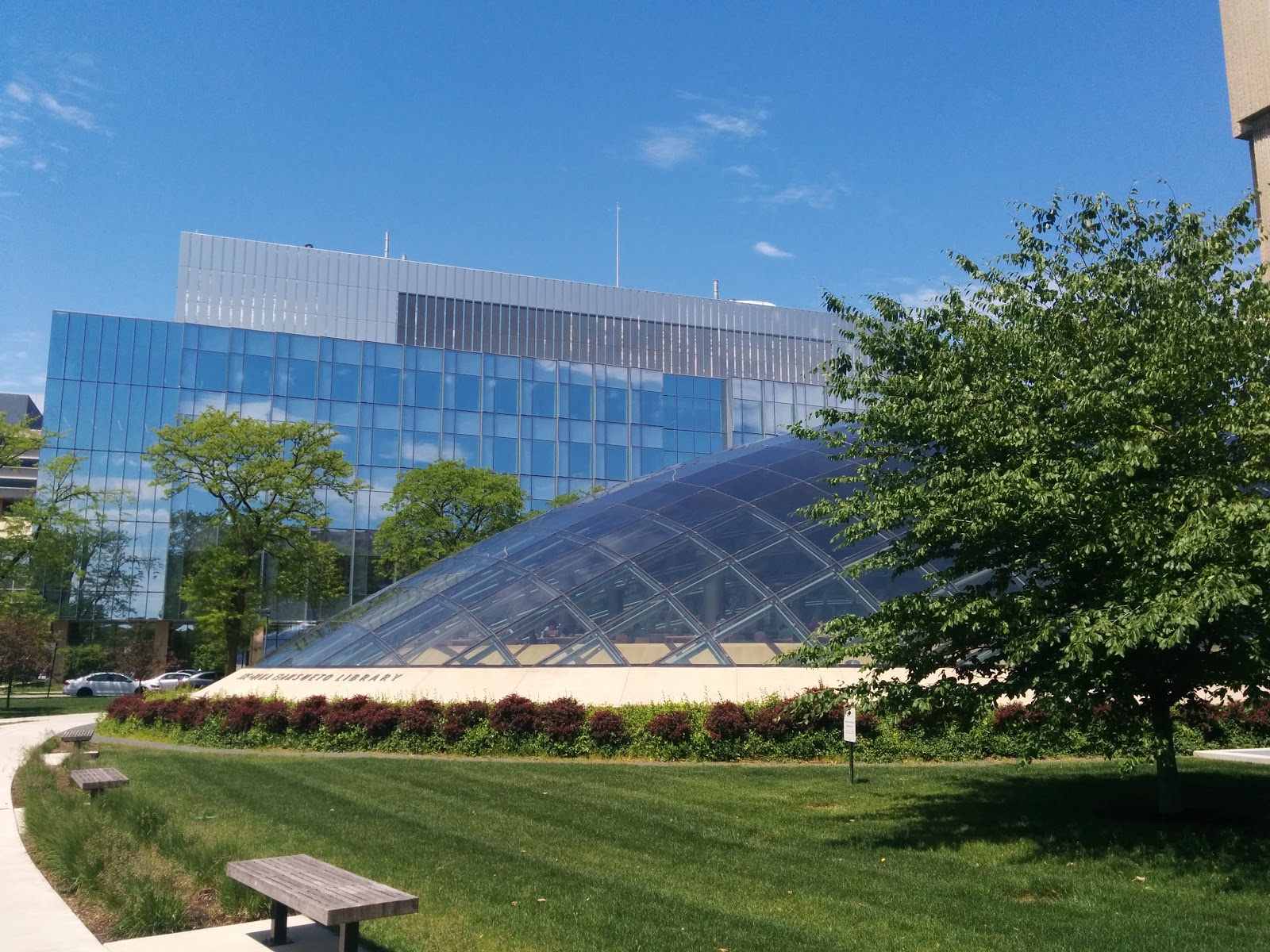 After U Chicago, next up was the Illinois Institute of Technology (IIT), home of the famous Ludwig Mies Van der Rohe plan and perhaps equally-famous McCormick Tribune Campus Center by OMA. The Campus Center is incredibly strange. The L tracks through the building are expressed both inside and outside, so it’s clear there’s a large train running through it. Inside, the finishes are left, well, unfinished: steel panels on the floors, unpainted drywall on the ceiling. At first I thought it was being renovated, but I’m pretty sure it’s supposed to be that way. It’s like the floor and ceiling finishes got reversed by accident somehow. There is a copious amount of neon orange, odd patterns in fritted glass, strange interconnecting levels, and a general feeling of outdatedness. I don’t think this building is aging well, and it’s less than 15 years old. 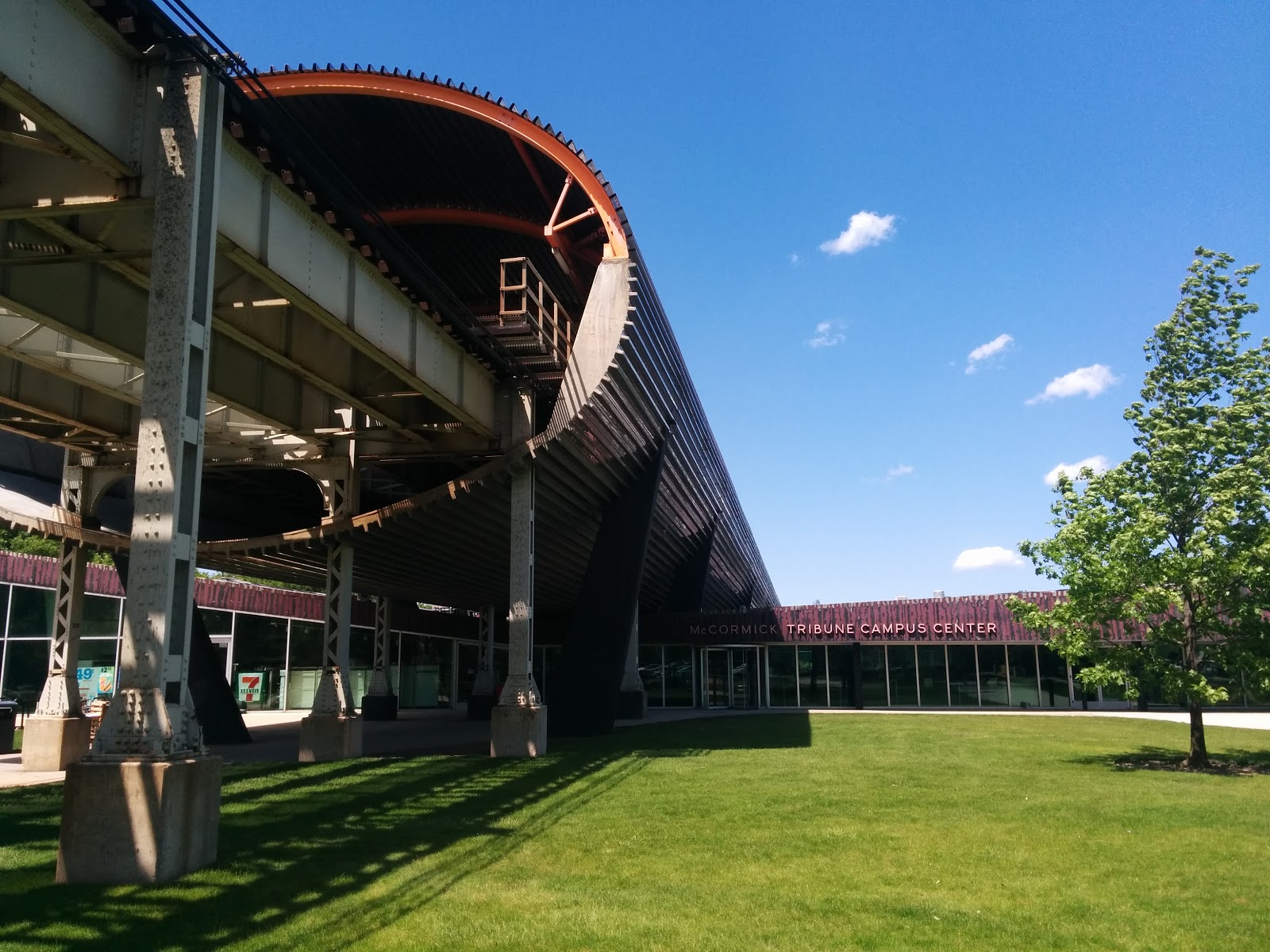 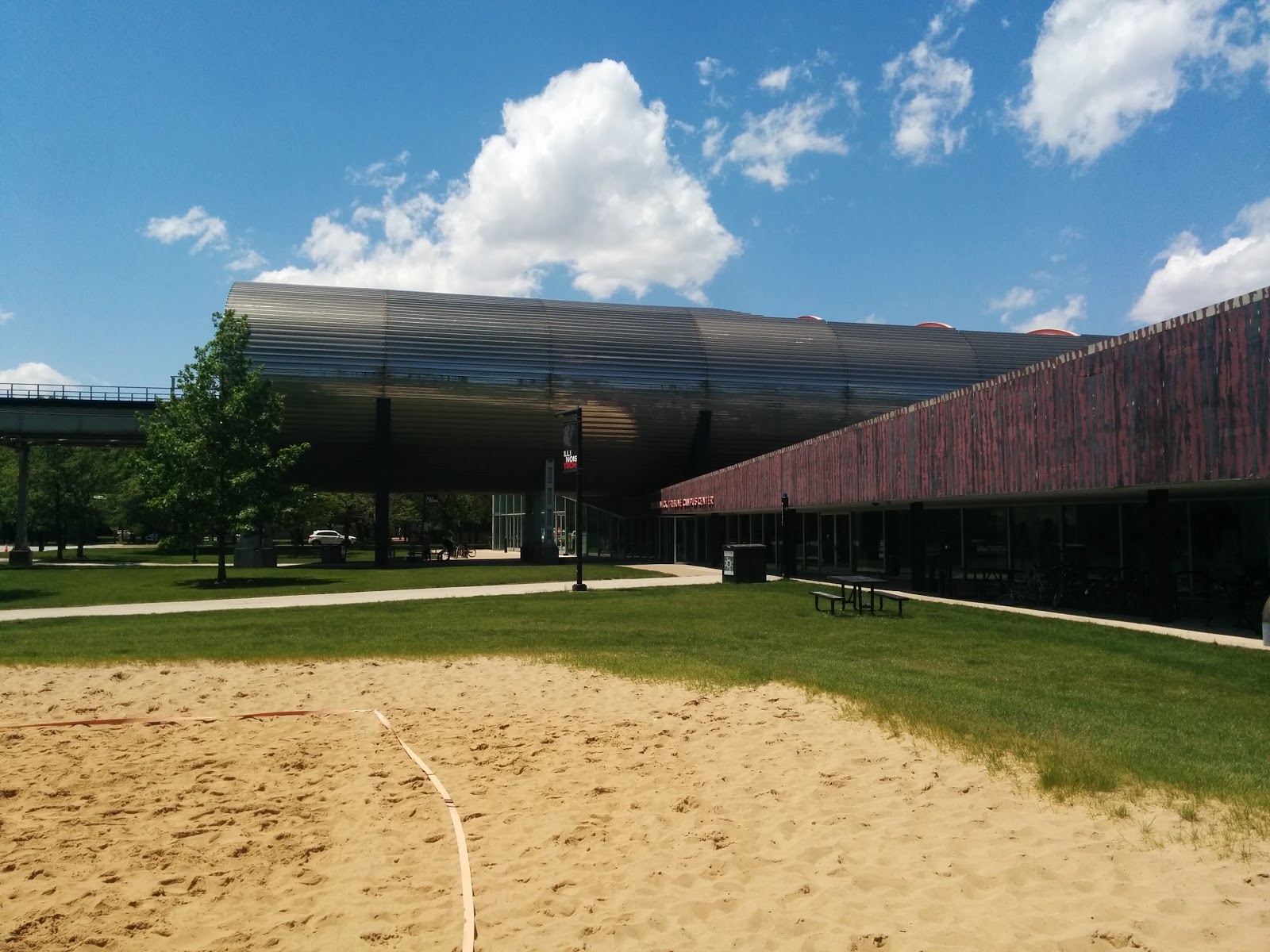 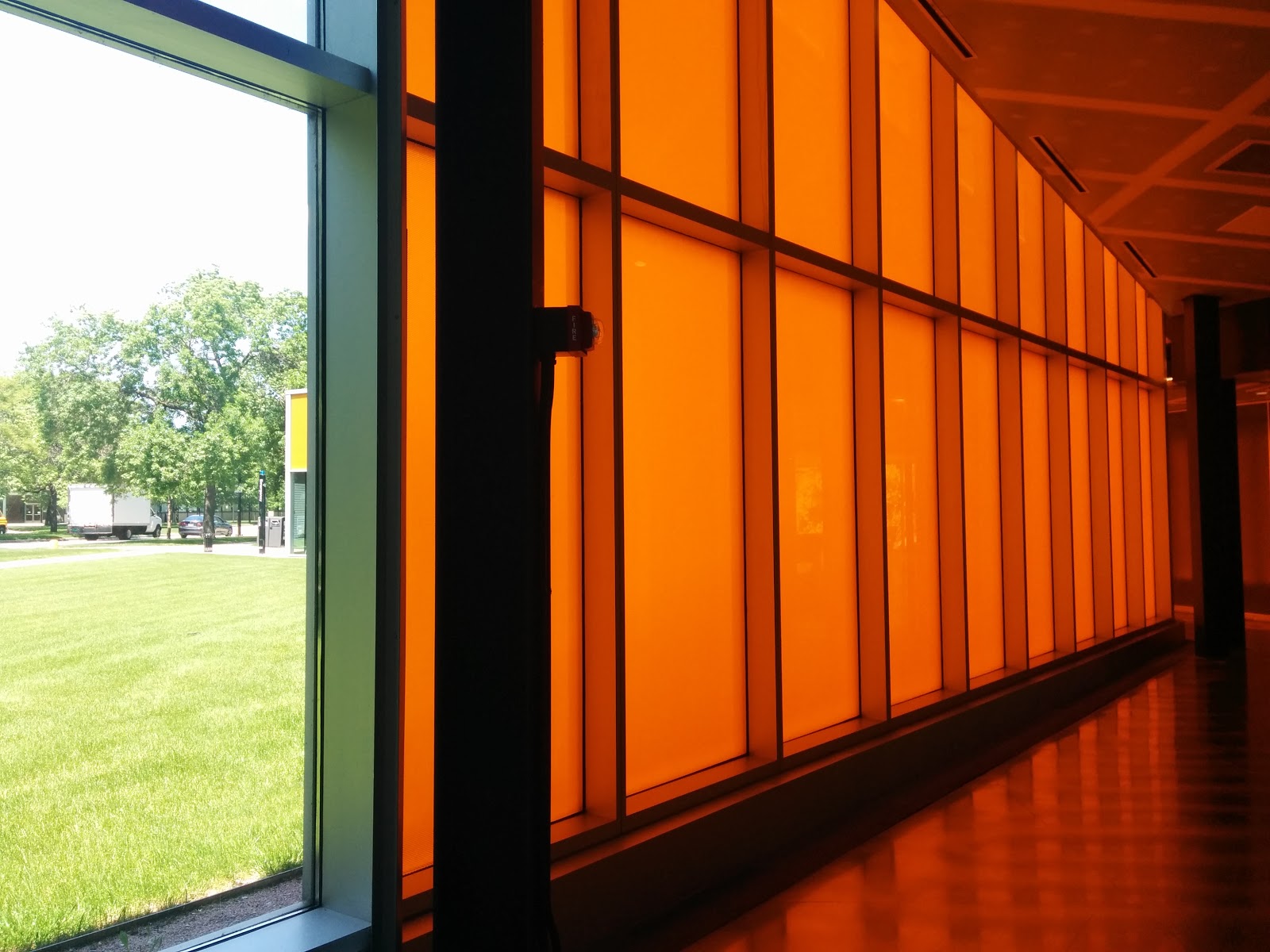 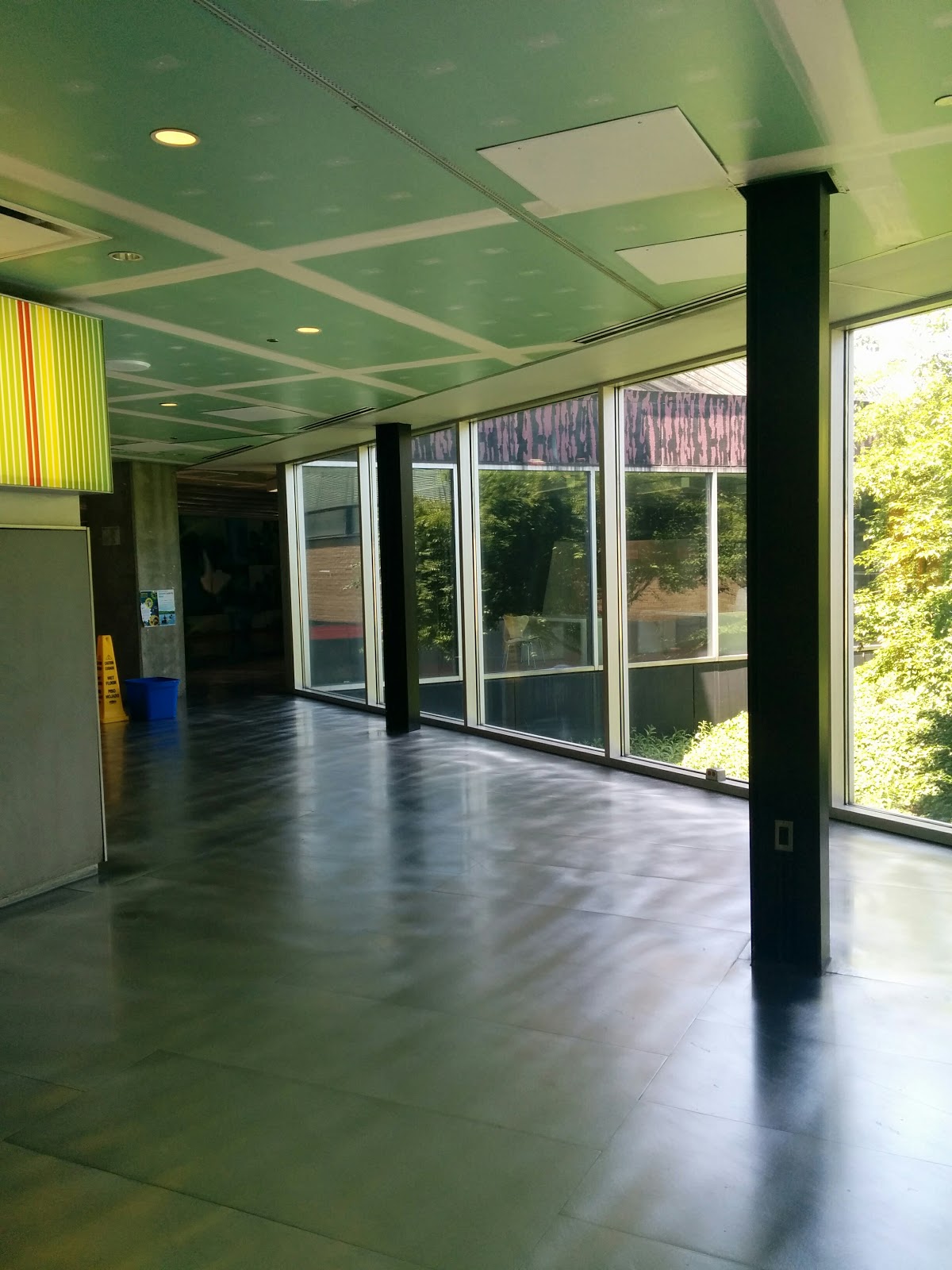 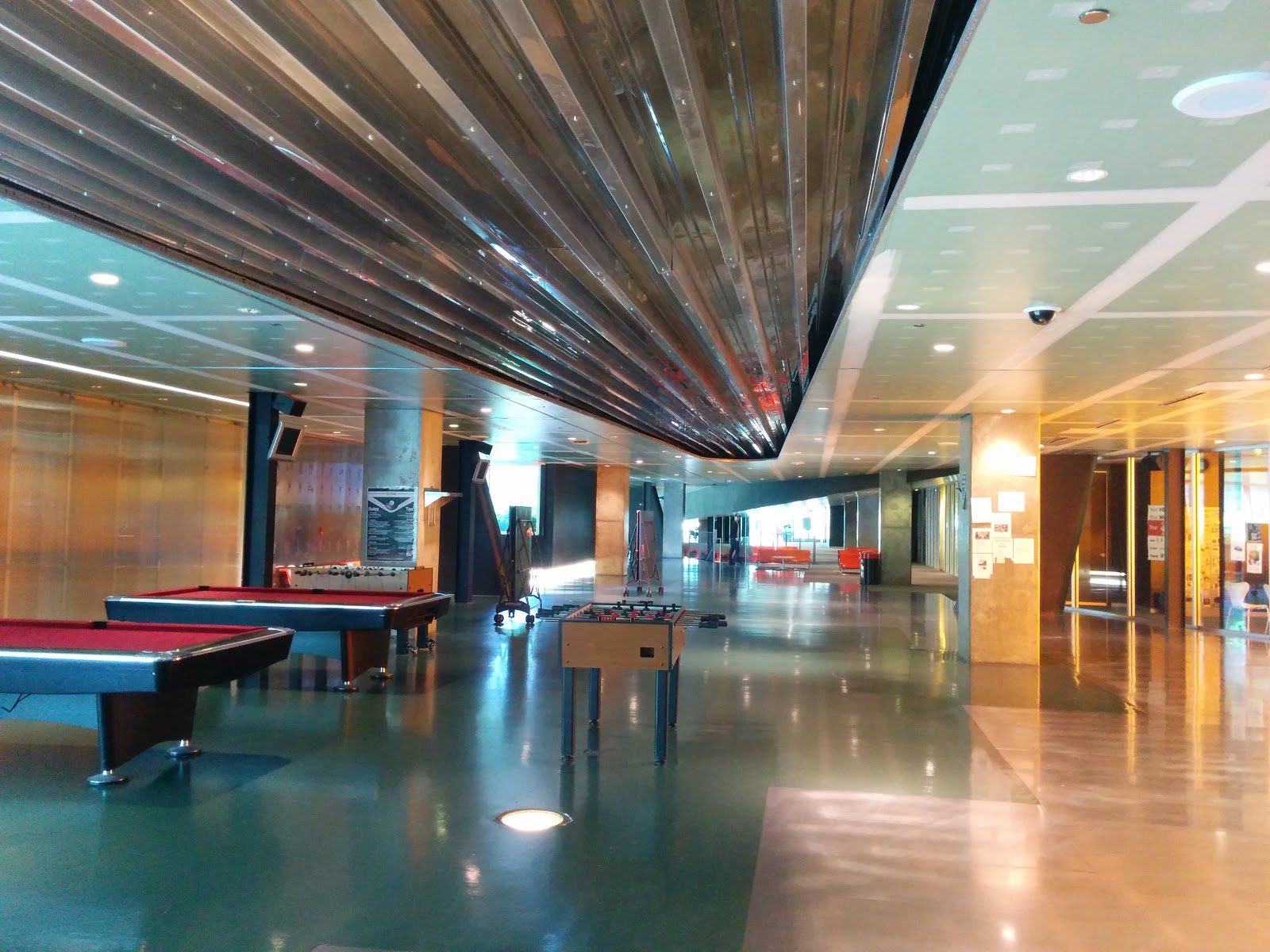 By contrast, Crown Hall, the Mies masterpiece and home of the architecture department, felt delightfully spacious and open, even though it demonstrated some signs of age in the ceiling. The end-of-year student work was on display throughout, and a couple families were wandering through. My only puzzle was how the building could possibly work when it’s full of people having studio: isn’t it terribly loud, without any acoustic privacy? The downstairs does have full-height partitions between the library and the rest of the space, but none of the other spaces have walls. I wonder how it feels in there during school. 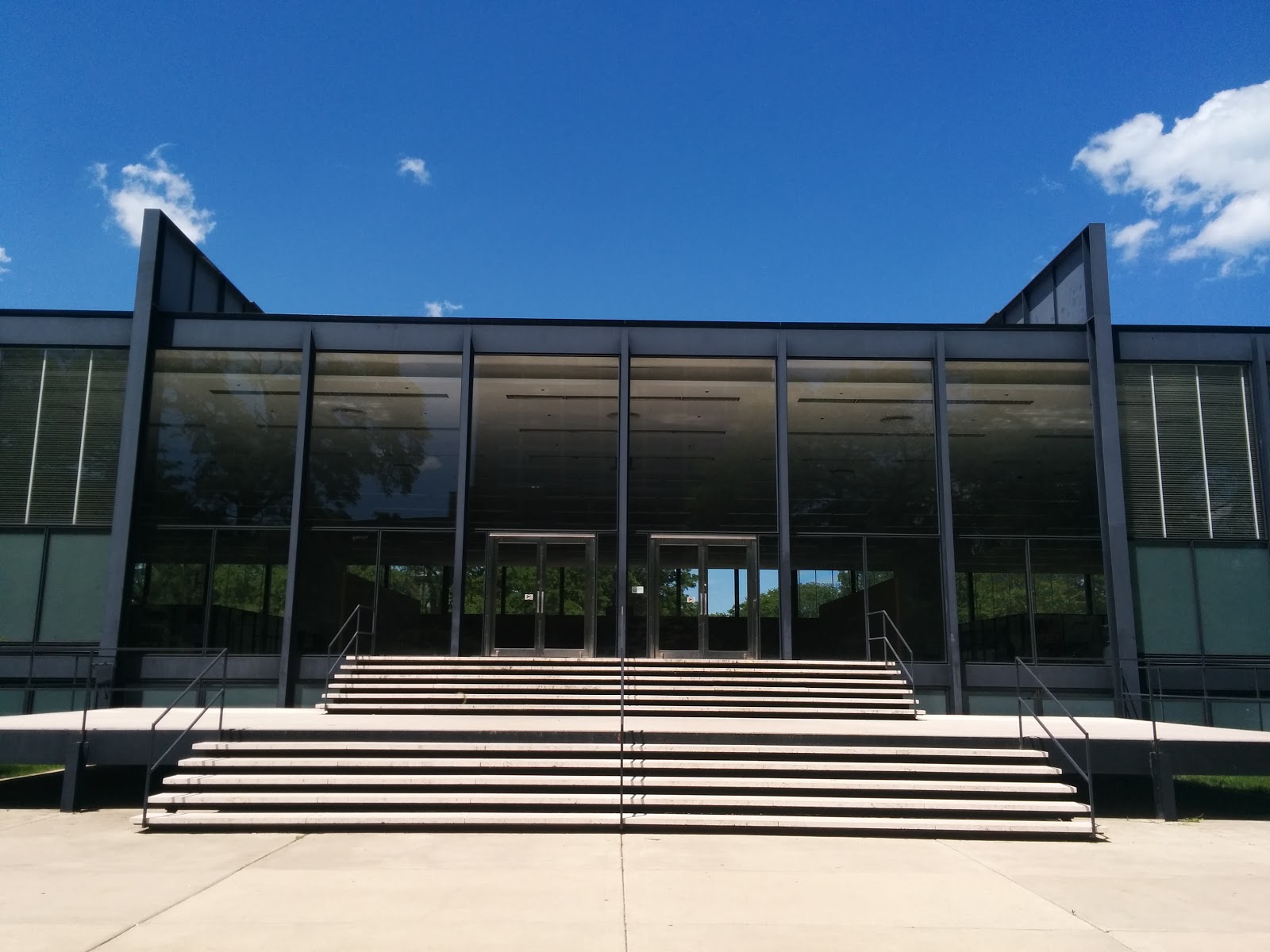 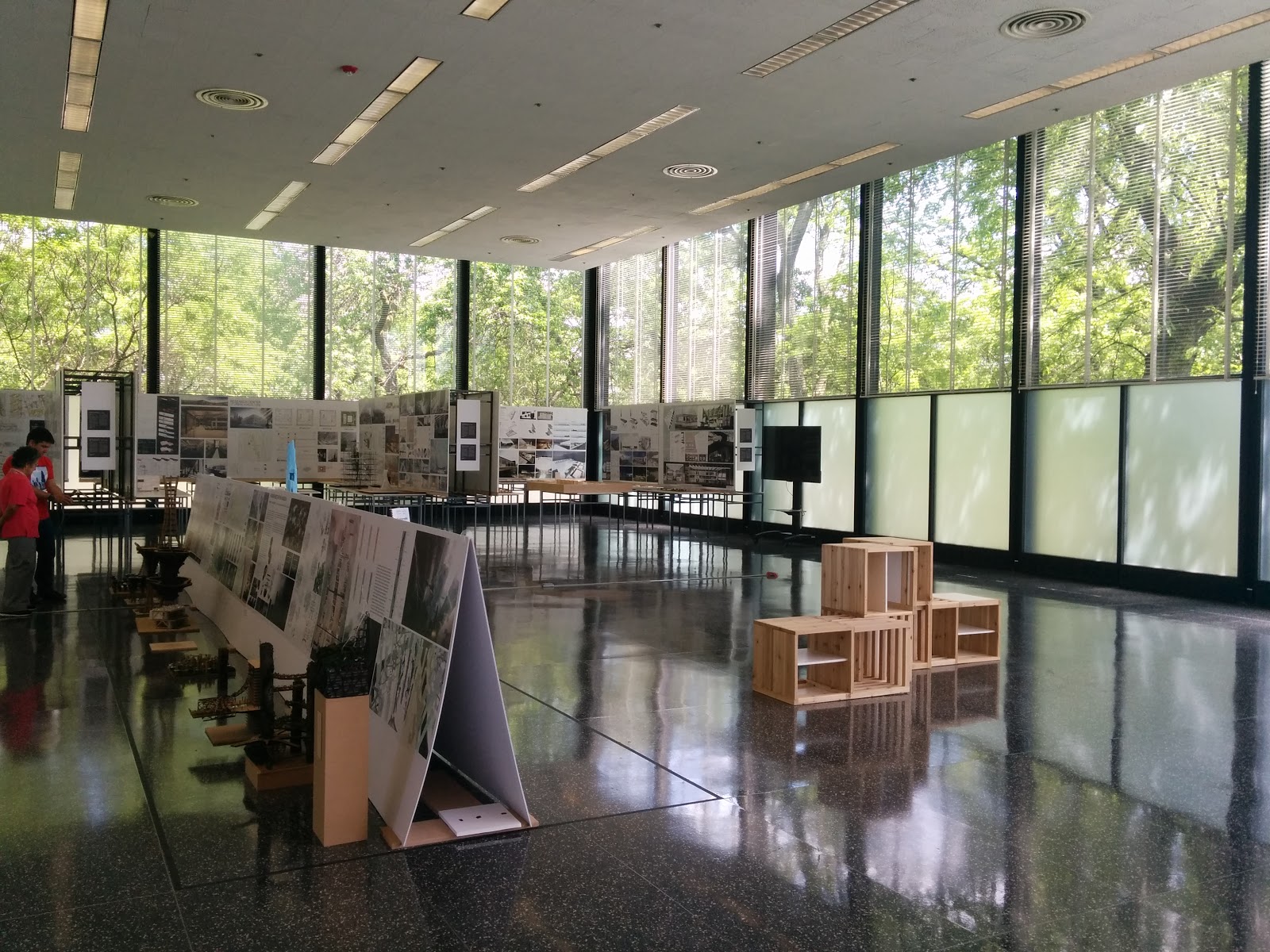 We had lunch at the diner where President Obama was said to be a frequent patron - this is his home turf, after all - and my friend dropped me off at the Art Institute of Chicago downtown to finish off the day. And all I can say is that it is an amazing museum. I speed-walked through the entire thing, and in three hours I could do little more than take note of what was there, not even spend time looking at much. My favorite areas were Piano’s Modern Wing, the Tadao Ando Gallery, the Chicago Stock Exchange Trading Room, the Thorne Miniature Rooms (need to spend more time in there. what.), the collection of architectural salvage items, and the crazy half-spiral stair in the Michigan Avenue Building. And a cool trompe l’oeil painting (1960s American?) of money and a medieval guy, of which I cannot recall the artist or title, so that’s going to haunt me for a while. No idea why I didn’t take a picture of it. 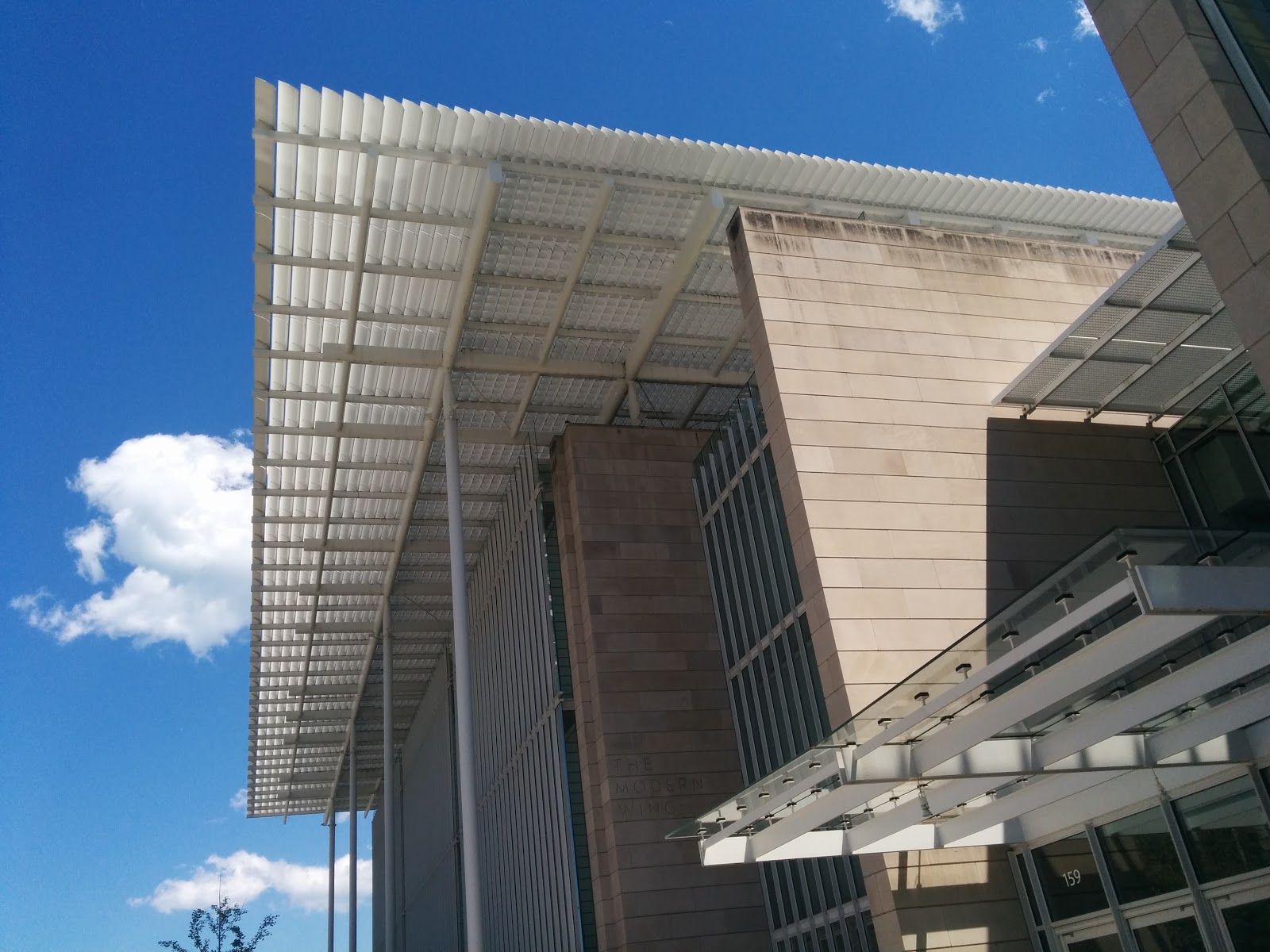 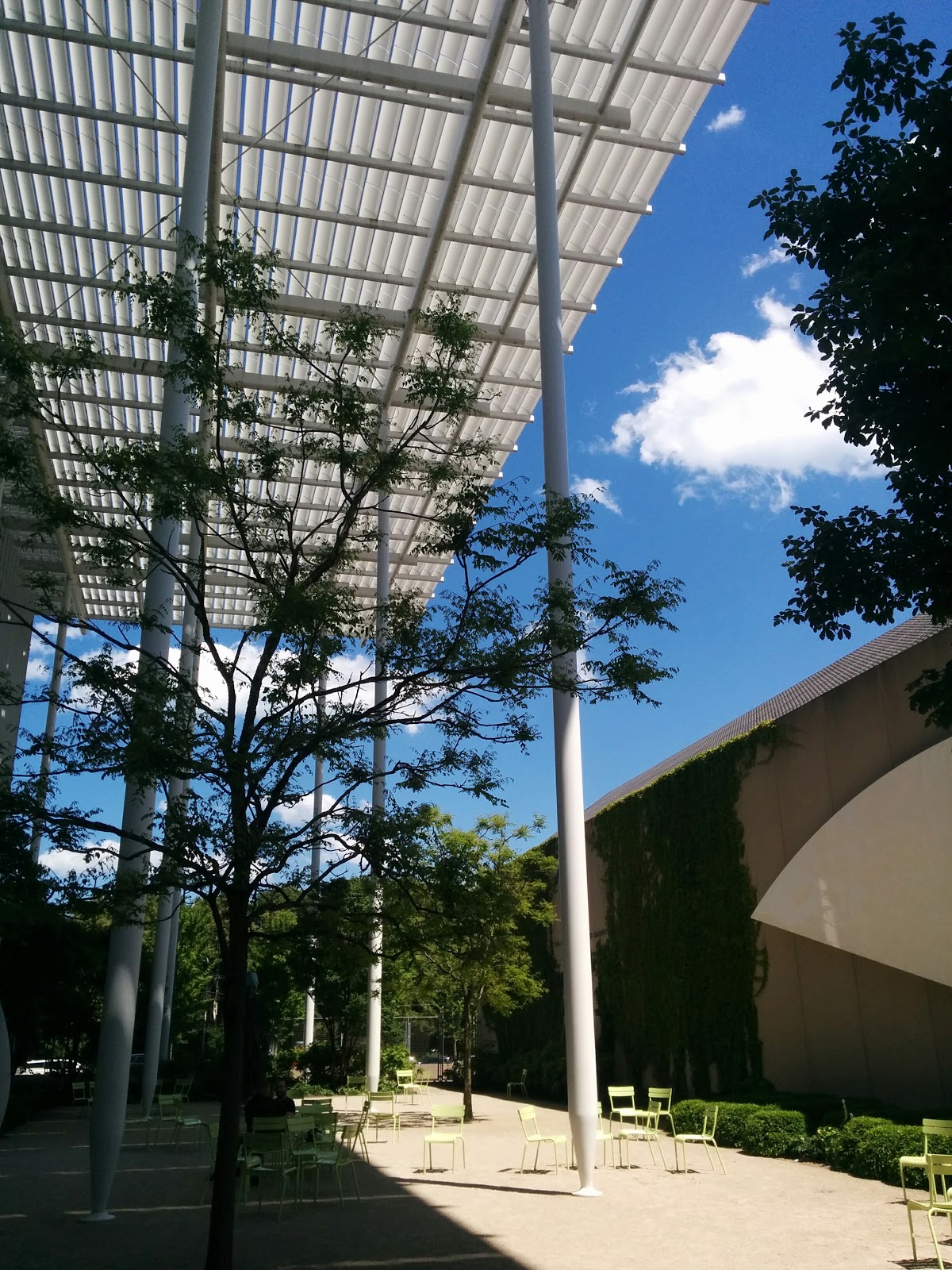 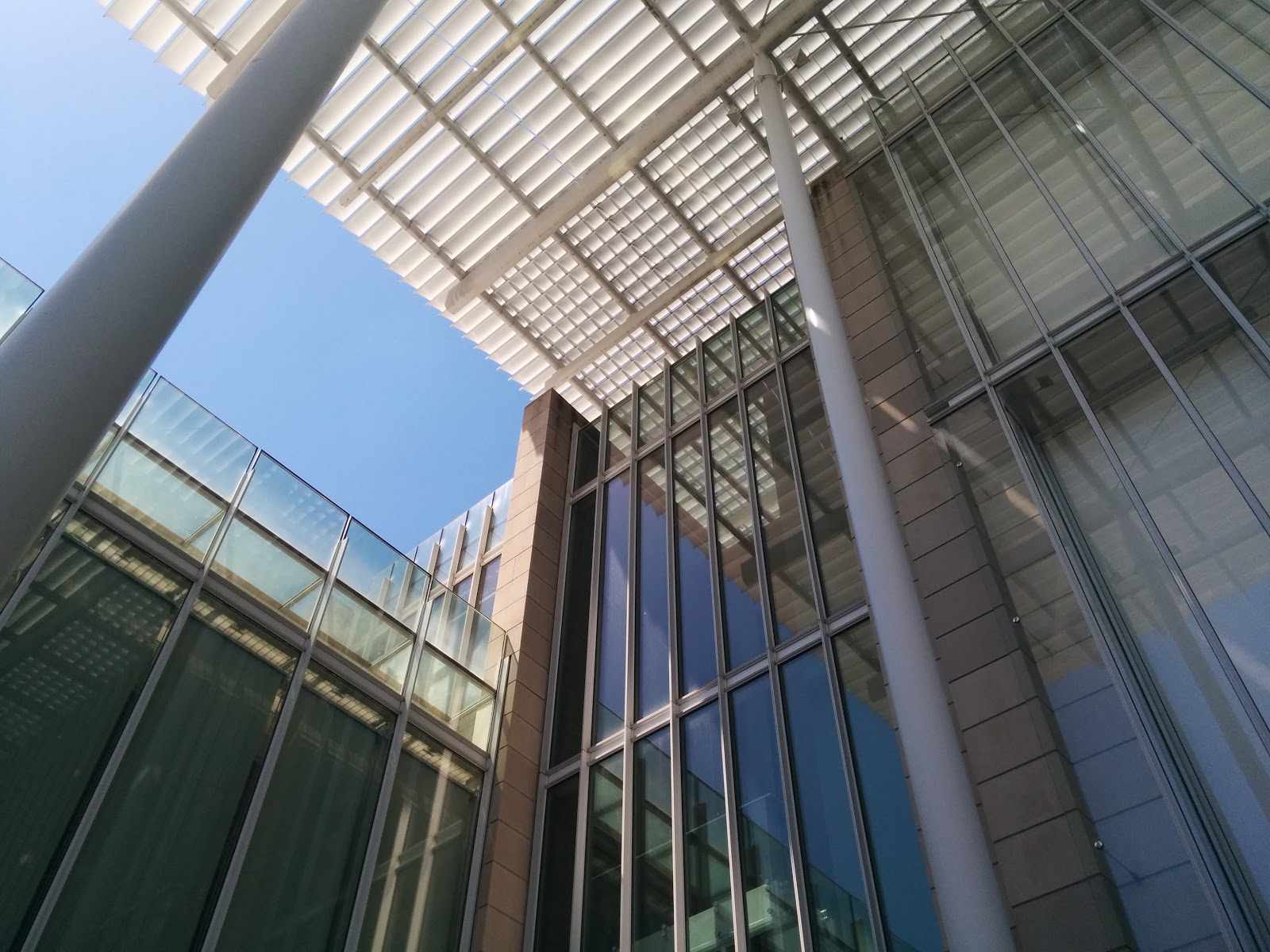 I have to give a shout-out to my fellow Columbia GSAPP alumni, one of whom worked in the Slide Library with me, for having an exhibit on display next to the cafe! Represent! 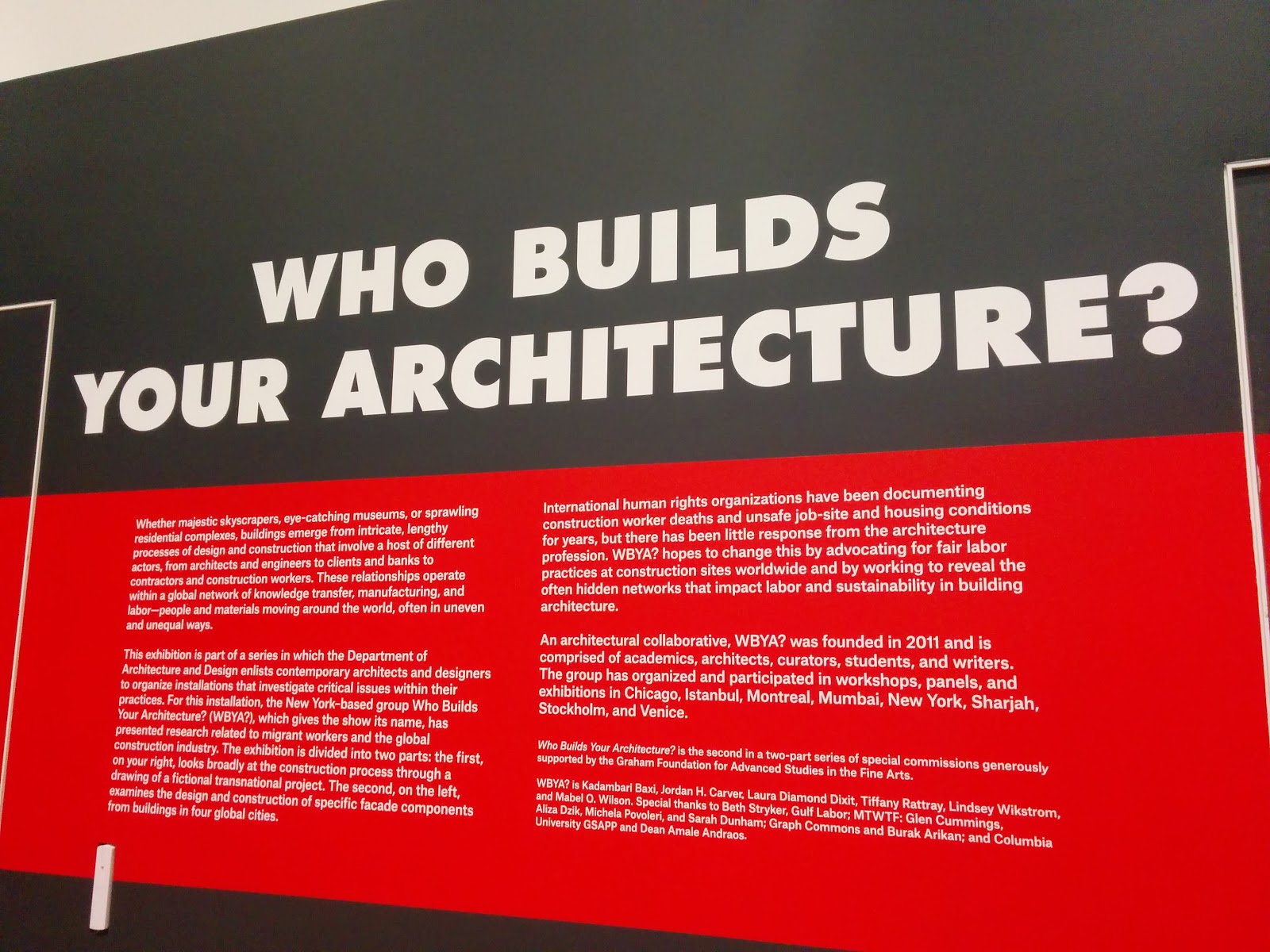 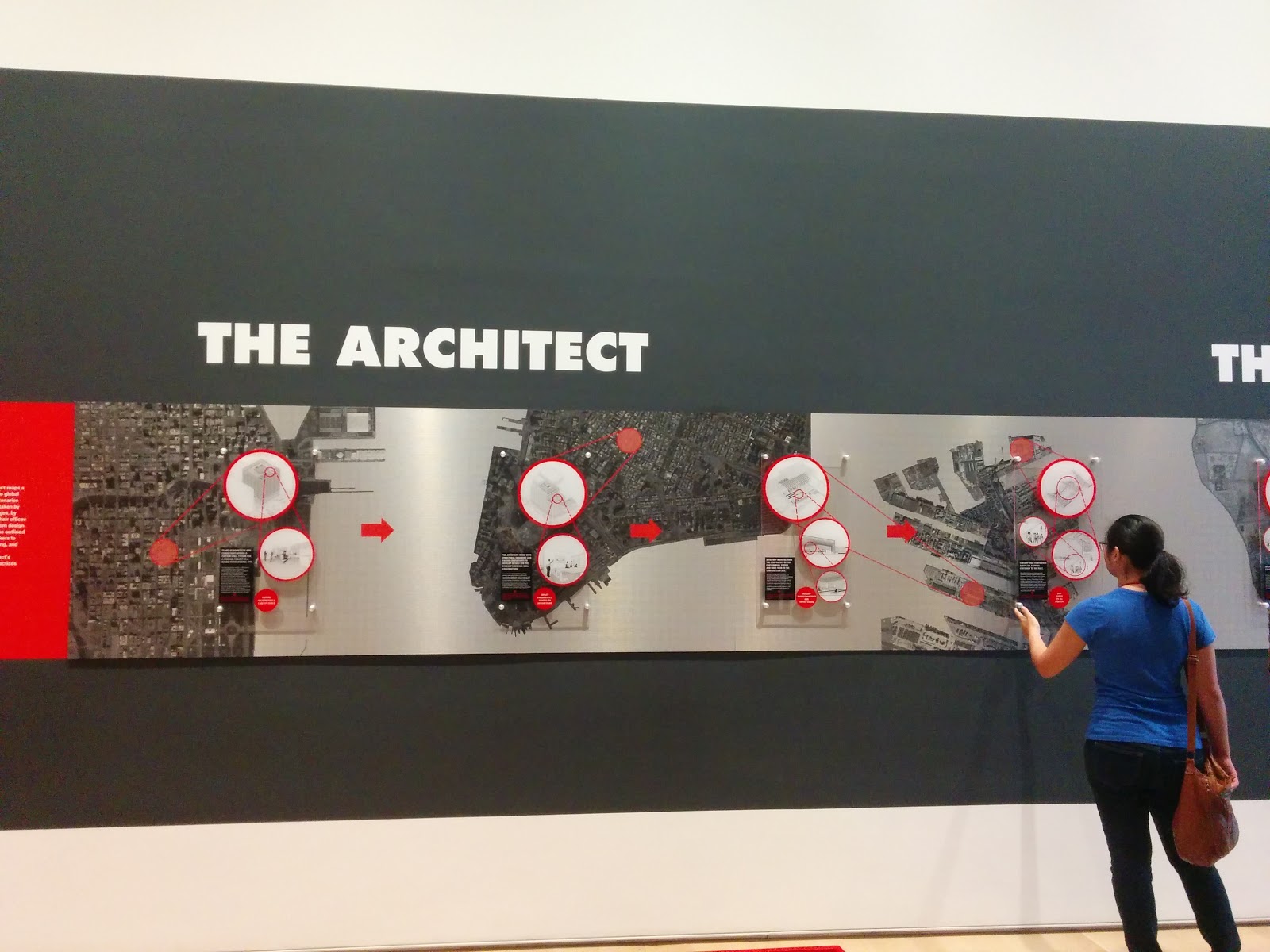 Suffice to say that three hours was not enough time to see the museum. I need to go back.

That evening I hit up a few more buildings, including the Monadnock Building (Burnham & Root, 1891 - one of the earliest skyscrapers) and the Louis Sullivan masterpiece of the Carson Pirie Scott store (1899, now a Target), then had dinner with my cousin at “avec,” which was a quintessential “New American” restaurant: overly loud with wood paneling as far as the eye could see. But tasty. 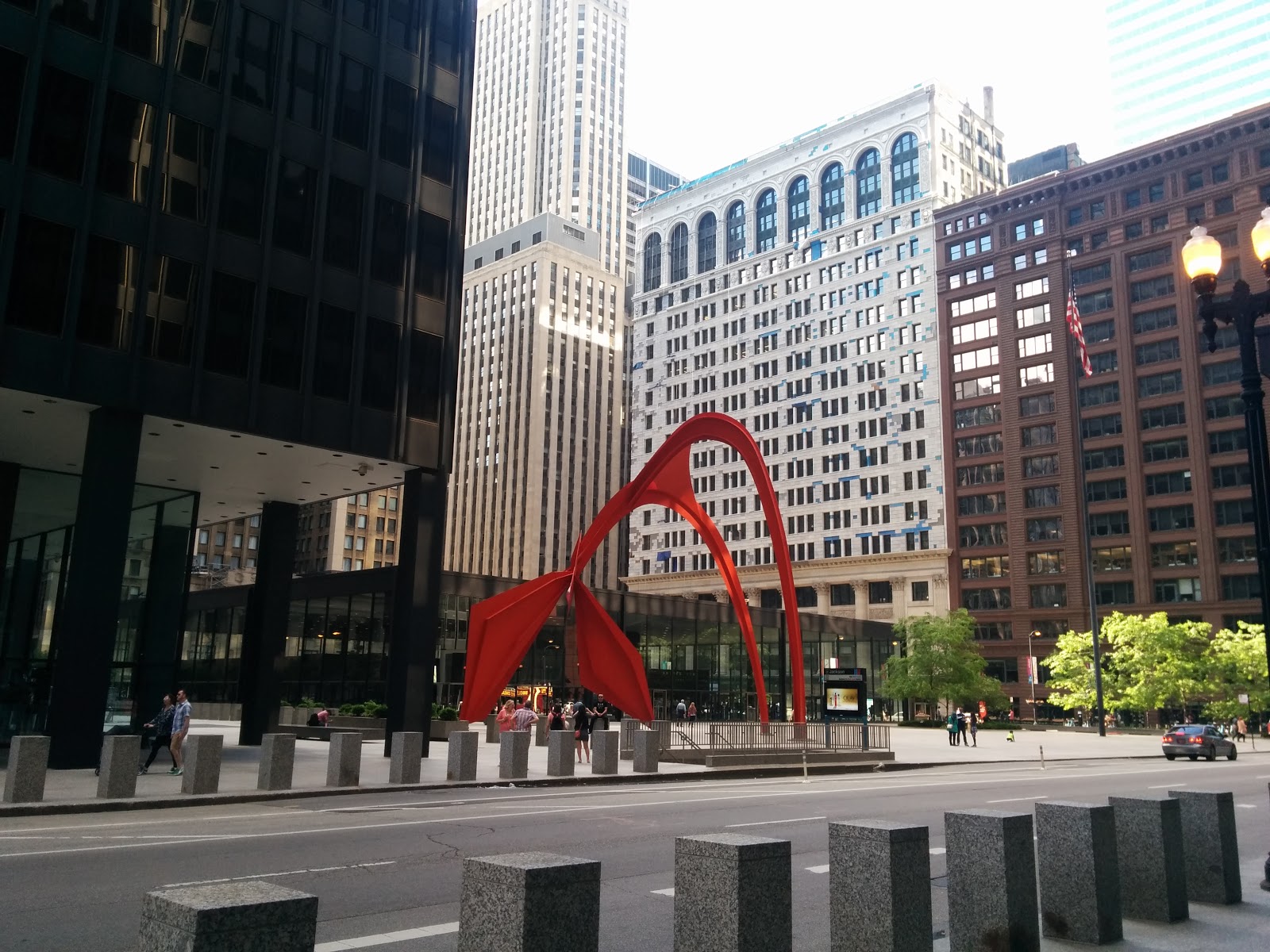 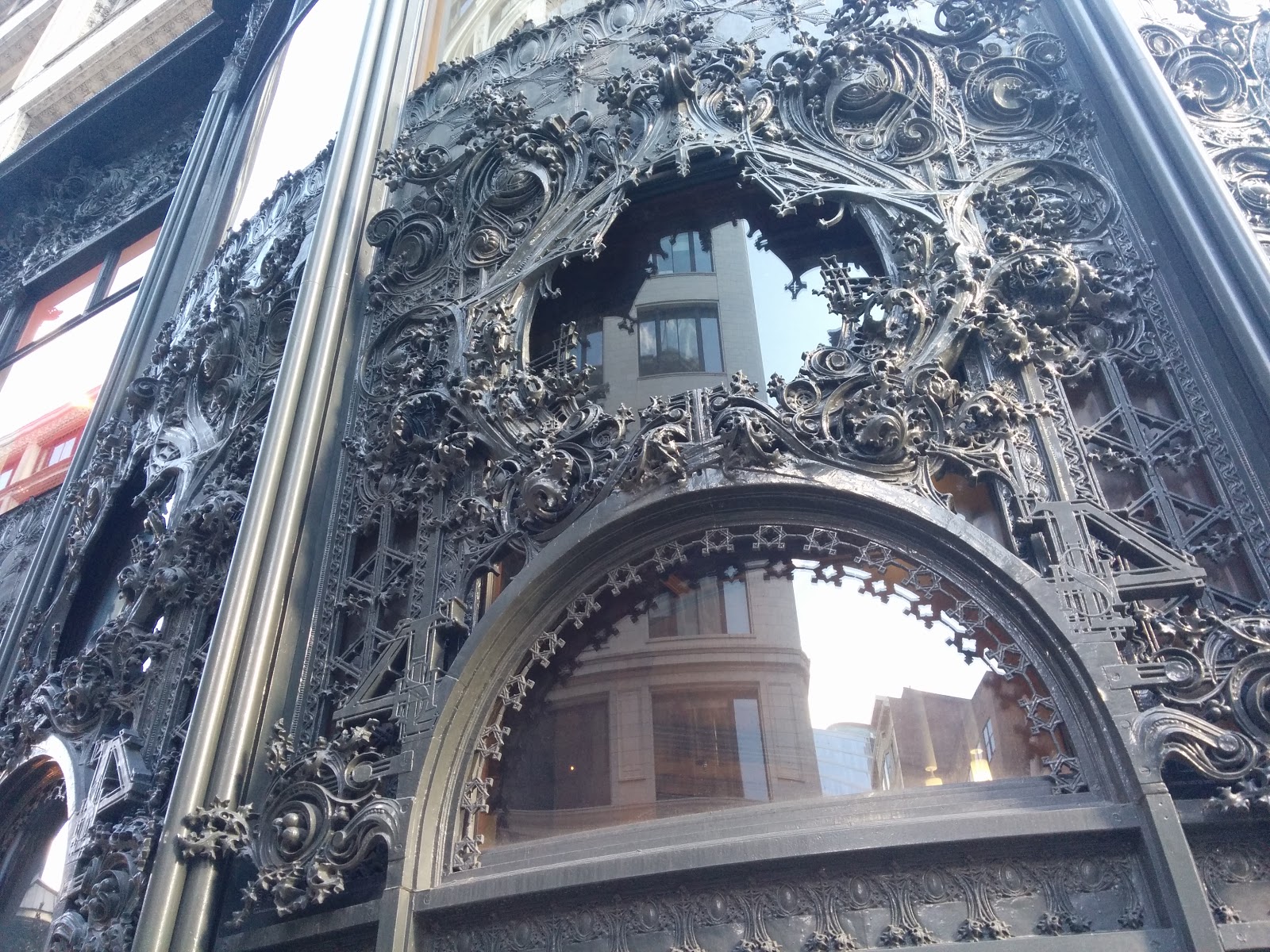 Grabbed some pastries and took the train to the airport - easy, convenient, and no issues other than being slightly confused about which entrance to use to get to the correct side of the station for the L. But I didn’t miss my flight, so it was fine.

Hope to be back soon, Chicago!