Here she is, my new Yamaha Clavinova CLP-625. 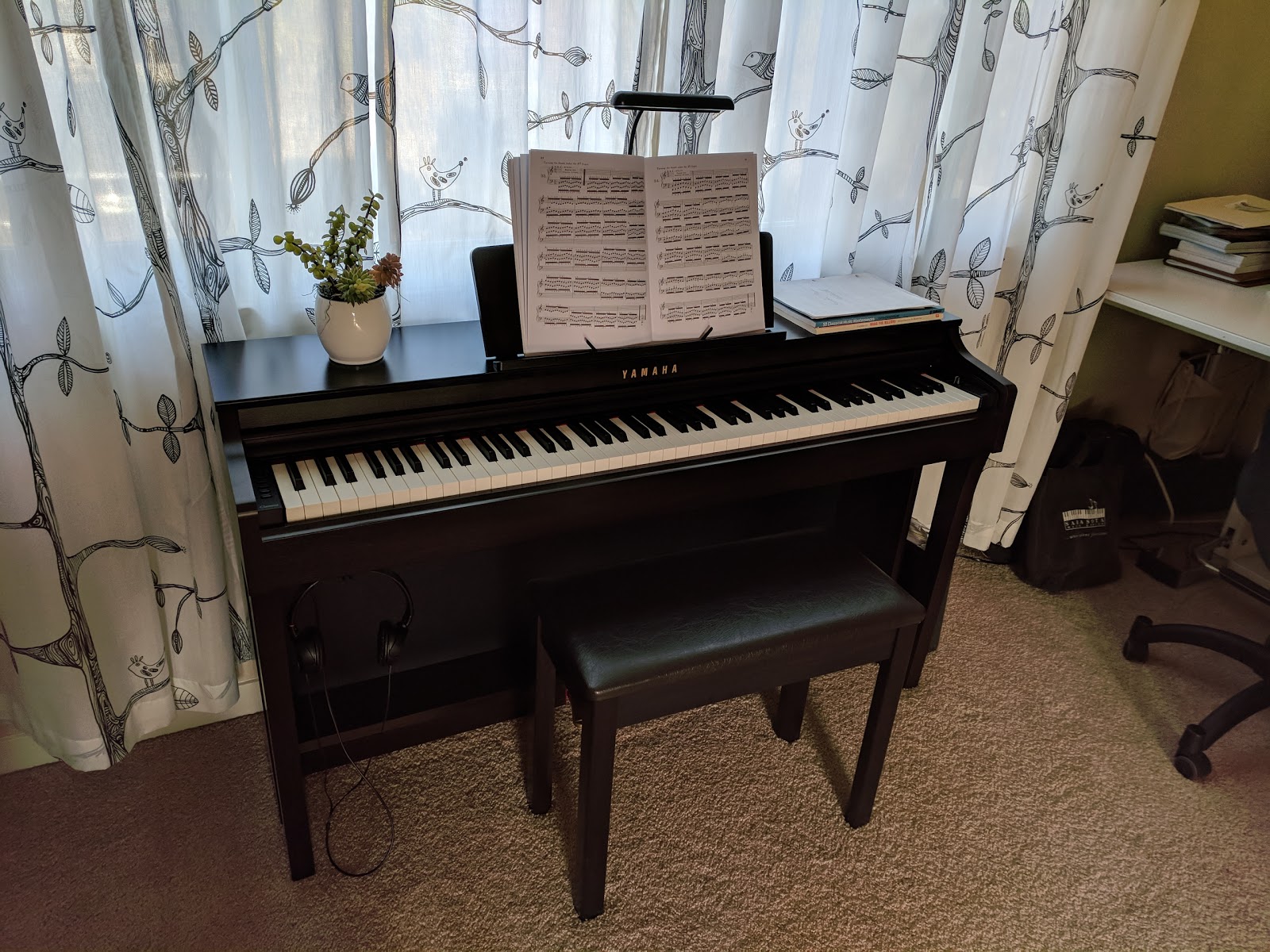 Overall, I have been very happy with it. The sound is good - I play mostly with headphones - and the interface is easy to use; no screen, just buttons, and not too many weird options. The touch is good, it feels like a real upright, while the size is much more compact than an upright. It fights neatly in our apartment, isn’t very heavy, and has all the features I need (admittedly, not many). It came with the bench and standard pedals, the music stand, and a hook for hanging your headphones. All in all, everything I wanted, and very little extra.

And now the saga of how we bought our piano:

For the last few years, my only access to a piano has been either accompanying J to the sketchy music rooms his company provides, or going to my church to play during off hours. We rarely went to the sketchy music rooms, so mostly I would practice at church – or rather, wouldn’t, since I rarely went there either; going to play right after work was the most convenient time, but was also the time I was least interested. So after regular practicing for one summer and playing a couple pieces for church, I stopped playing.

Fast forward a year or so: I decided it was time to look at other options. Digital pianos have improved tremendously in the 15 years since I last playing a dinky keyboard, and I knew some of my friends had digital pianos that they liked. So I did my research - mostly here - and asked my friends for reviews. I even played one of their pianos. After looking at used digital models online, it was clear that a new model would be best; the older models are substantially worse, and people seem to price them outrageously, thinking that they hold their value like an acoustic piano, when they don’t. Most people were pricing them at half or more of original price! For not much more than that, I could get a much better new piano. (Remember that digital pianos are just electronics equipment, no matter what anyone else may say, so it would be like paying 50 to 80% of original retail value for an iPod or TV, five to ten years later. That’s just stupid.)

I was not about to buy something without trying it first myself. In my area, there aren’t a lot of different piano dealers, so that narrowed down the options. Based on all this, I decided either Kawai or Yamaha was probably best for my budget and needs.

First I checked out the Kawai store here in Mountain View. The salesperson was friendly and helpful, and I played a few models. The higher quality models, the CN-27 and 37, were noticeably better, and noticeably more expensive. There weren’t many different models available, so after trying them all, we left with some price quotes and a feeling like these weren’t the right thing.

Next up was the Yamaha store in San Jose. This store had a much larger selection of digital pianos, but one of the worst salespeople I’ve ever encountered, as I shall describe. We walked in and he immediately greeted us - great - and we asked if they had a certain model line that I thought was appropriate for me. He responded that oh, no, this store didn’t carry anything like that; we would need to go to a Guitar Center or similarly inferior (I’m paraphrasing) store for that. This store carried fine instruments for real musicians (paraphrasing again). At that, I was just about ready to walk out the door. But we had driven all the way to San Jose, so I asked if he’d show us what they did have, anyway, just to see. So he proceeded to show us all the models, starting, of course, with the most expensive. These were grand-sized digital pianos with more speakers than you’d know what to do with, and price tags to match, in the tens of thousands of dollars. I may have rolled my eyes a few times; my memory is foggy. There were some very expensive uprights, too, with exposed mechanisms so you could see that they had real wood action that somehow translated into digital sound, all just to reproduce the tactile experience of playing a true piano.

After the grand tour, working slowly towards the more moderately priced options, we finally arrived in a side room where there was a sale going on, and he sort of waved at them and said these were part of a university sale. Glancing around, I discovered that they were the very next model line up from the one I had mentioned at first, and at their sale prices, they were the exact same price as what I’d had in mind.

So, in fact, the salesperson did have just what I was looking for – he just didn’t want to tell me, or didn’t think it was worth mentioning, or something. I then spent some time playing the various models. Yamaha has an extensive line of options, and adds improvements every year – these were all model year 2016 and 2017 pianos, with the latest “stuff,” and they felt comparable to the more expensive Kawai models.

I left the store feeling positive that I had found something that would work, but not wanting to commit yet. I did some more research, tested yet one other piano that I knew about, and finally made the decision. I decided on the CLP-625 and called the store.

The salesperson (same one) was, of course, happy that I had decided to purchase a piano, but I had some questions he found it difficult to answer. Would they deliver it to me, and how much was delivery? Delivery was $100, I was told, plus extra to take it up stairs, something like an extra $90 per flight. We live on the third floor. Plus they couldn’t give me a delivery window of any precision - I’d have to wait at home for half a day for it to arrive. And he really, really did not recommend that we try to fit it in our car. He told me horror stories of people who couldn’t fit their new digital piano in their SUV, tried to unbox it in the parking lot to get it to fit, chaos ensuing, etc etc.

I decided I needed to go back to the store in person to check it out one last time. I was still pleased with the piano, but hesitant about how to get it home. While I was signing the initial paperwork (apparently buying a piano has nearly the same amount of paperwork as buying a car, it’s ridiculous), the salesperson mentioned that they had a box of a different but similar size model upstairs! So I went up and measured the box. It was definitely too heavy for me to carry by myself, but dimension-wise, wasn’t too big to fit in my hatchback. I decided we would make it work.

After trying to round up some help with picking up the piano when it was ready a few days later, I ended up pressing J into service. I brought my collapsible hand truck with me. Back at the store, for the third and final time, we slipped the box onto the hand truck – and I could easily cart it by myself. In the end, I didn’t really need J there at all! It was easy to maneuver it myself into the car. Back at the apartment, it was difficult to get it up the stairs, and I could not do it by myself, but J didn’t need to have come with me to the store.

In the end, the salesperson not only had nearly run me out of the store by incorrectly telling me he had nothing I wanted, he had also nearly convinced me I could not get the piano I wanted because it was too hard to get home, although in the end, it was reasonably easy. And thus, I conclude, he was the worst salesperson I’ve met so far. I’m pleased to have persevered and actually managed to buy the piano! While I haven’t been playing as much as I should, I have been playing more than I was before, and even J is using it sometimes. All’s well that ends well. 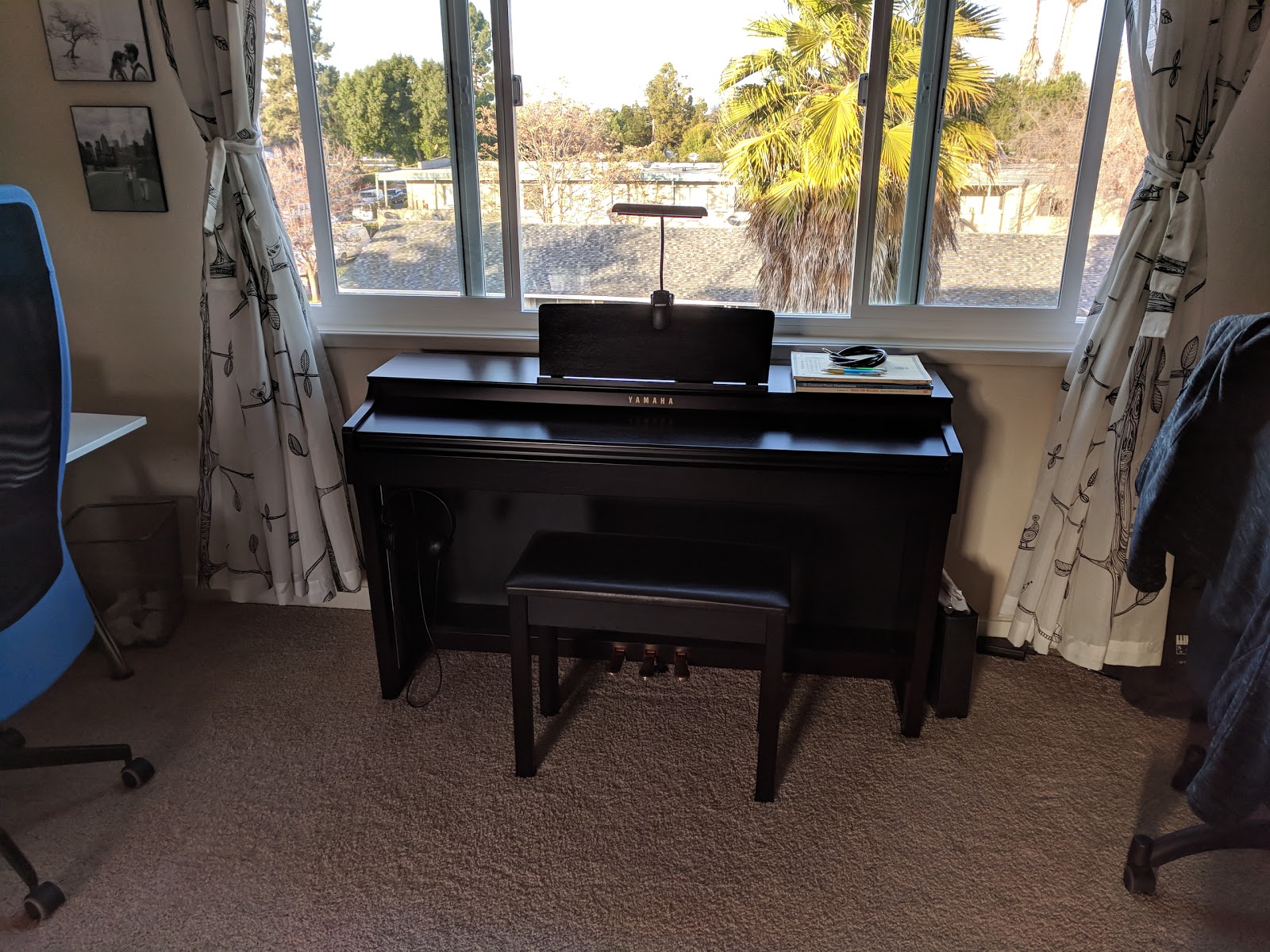 (FYI: If you are in the San Jose area and thinking of getting a piano - let me know and I’m happy to let you know the specifics of who to avoid.)

Piano specs, if you’re curious: https://usa.yamaha.com/products/musical_instruments/pianos/clavinova/clp-625/specs.html. And no, I did not pay list price, fortunately!