After four days on Maui, we hopped a flight to Kaua’i for the second half of our Hawaiian vacation!

After leaving the fancy hotel and getting a Lyft to the airport, we arrived perfectly on time, took our three pineapples through security, and then… waited. Our flight out of Kahului was two hours delayed. Fortunately I had plenty of books to read! The flight itself was short and uneventful, and we arrived in Lihue just in time to pick up the car, drive to Kapa’a, and get some dinner at Kaua’i Pasta, since most restaurants close at 9pm. Then we found our Airbnb and got some sleep.

As usual, we were up relatively early, but for once didn’t have to be somewhere right away. We had a breakfast of fresh pineapple and then went to explore Kapa’a. We visited some shops, picking up breakfast food for later, some papayas (they had three different kinds at the grocery store!), local chocolate (pretty bad), and kulolo, a Hawaiian dessert that’s a paste made of taro, coconut, and sugar. The latter was pretty weird; it was like a soft, purple fudge with an odd but interesting flavor. I’d recommend trying it once!

We got lunch at Pono Market, which has a quick service counter of poke and Hawaiian dishes, and ate at the Wailua River Marina while waiting for our kayak guides to arrive. We went with Wailua Kayak Adventures, and when they say “family run,” they mean low tech. They make all reservations by phone, and their check-in list was hand-written, but they seemed to know their stuff. Two older folks showed up to check us in and collect the payments – you can’t pay ahead online – and then our guide arrived. She was one of the more interesting people we met on our trip, regaling our group with a mixture of mythology, history, and astrology (not astronomy) that she presented in an indistinguishable way. After the trip was over, we had to look up half of what she said in order to figure out what was true and what was myth, but it certainly added some interest to the trip! 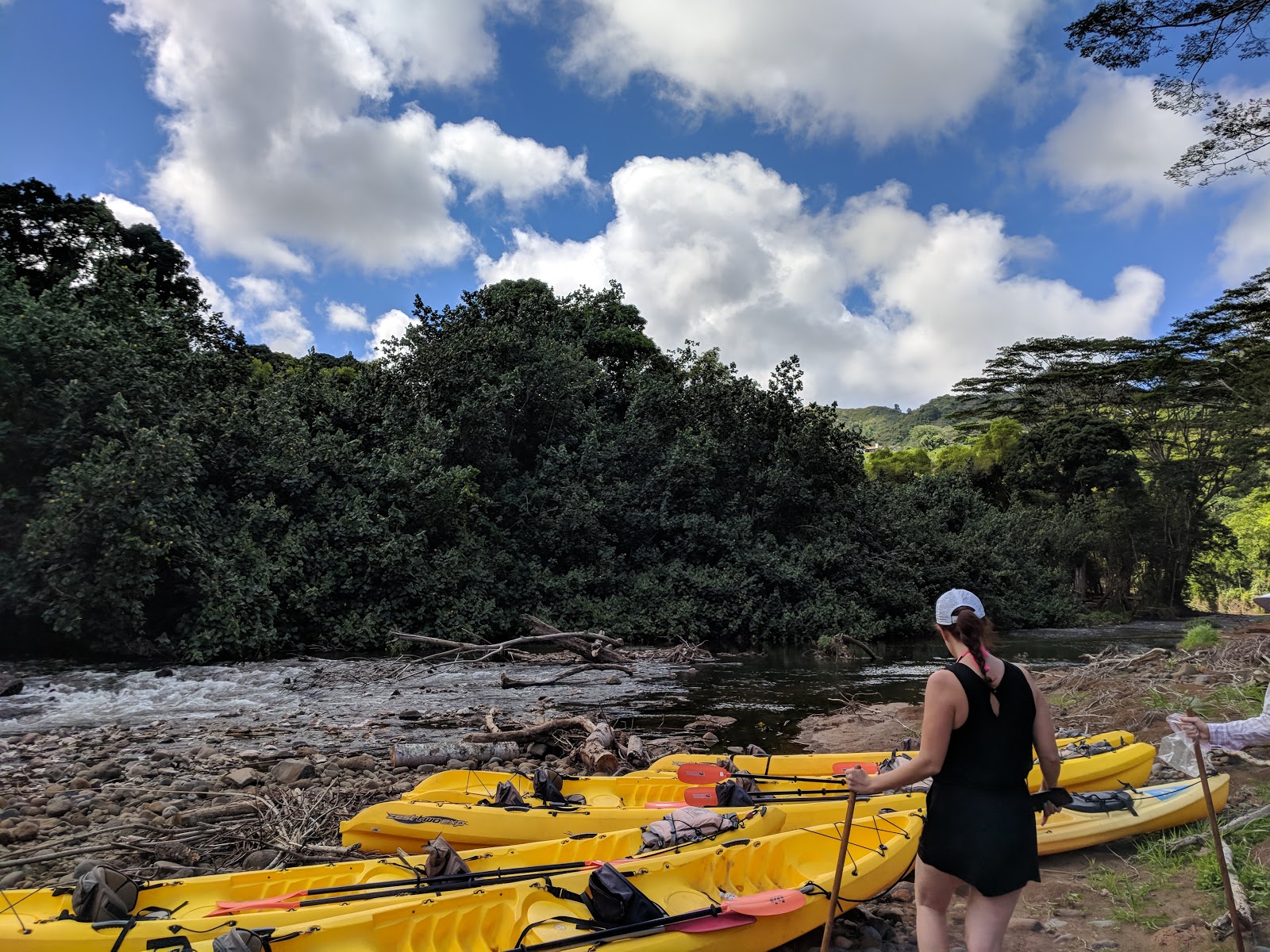 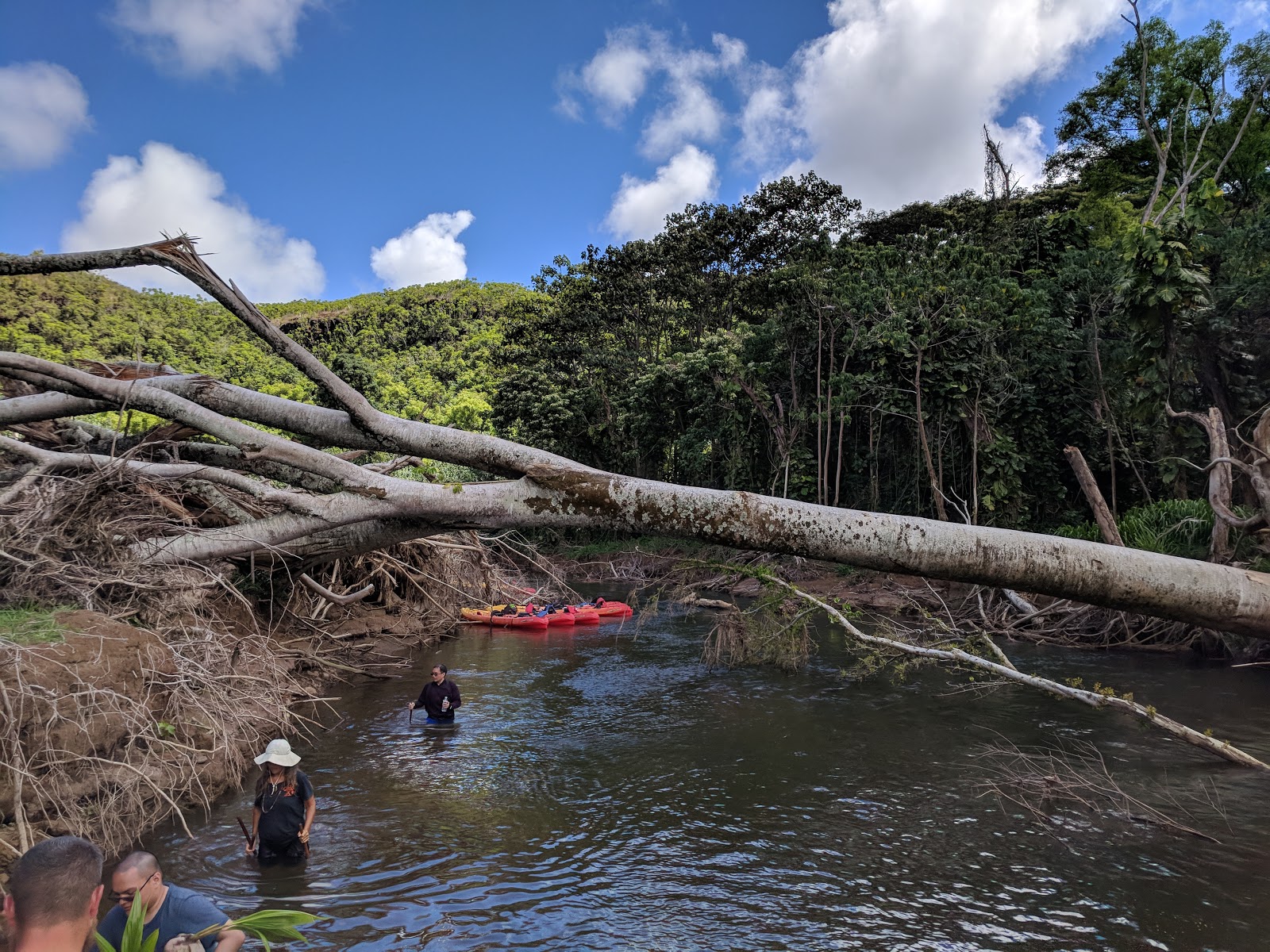 We kayaked down the Wailua River (blazing sun, no shade), up the North Fork, to a point where there were some large trees down, then hiked an easy trail to the Secret Falls (also called Uluwehi Falls). We were one of the last groups of the day, so most of the other groups were leaving when we arrived. After exploring the waterfall (freezing cold) we hiked back through the forest to our kayaks. Along the way, the guide pointed out some unusual plants: passionfruit vines, shampoo ginger (she demonstrated by putting some in her hair), and others. 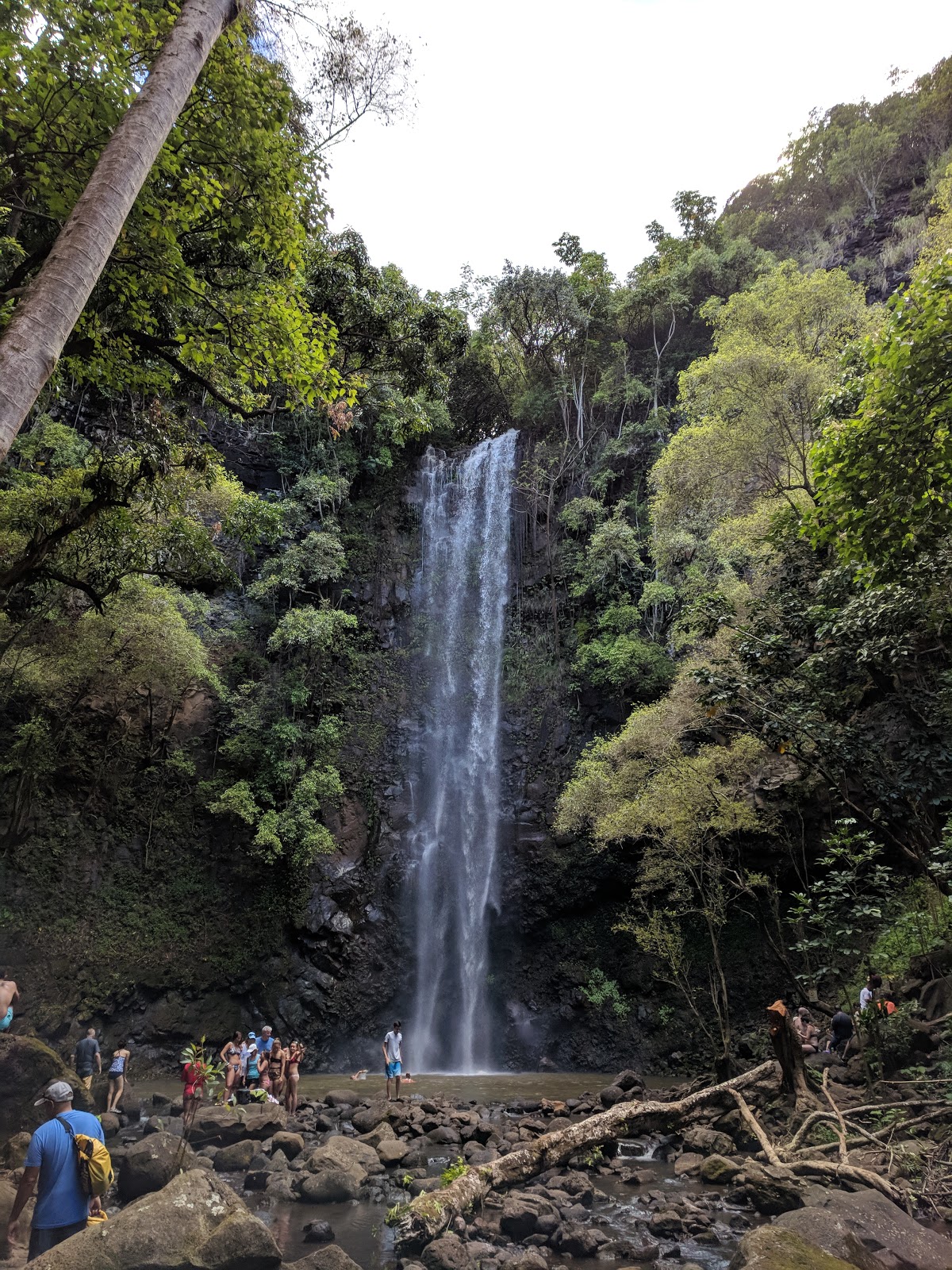 The trip back up the river really tested our arms, but we finally made it back, and, most important to our pride, we weren’t last. I couldn’t sense much current running in either direction, so we struggled to pull ourselves along. After that workout, it was time for dinner, which we had at Kauai Family Cafe, a Filipino-Hawaiian restaurant. I had the milkfish (bangus), which was really good. As usual, all of our friend Cynthia’s recommendations are spot on! 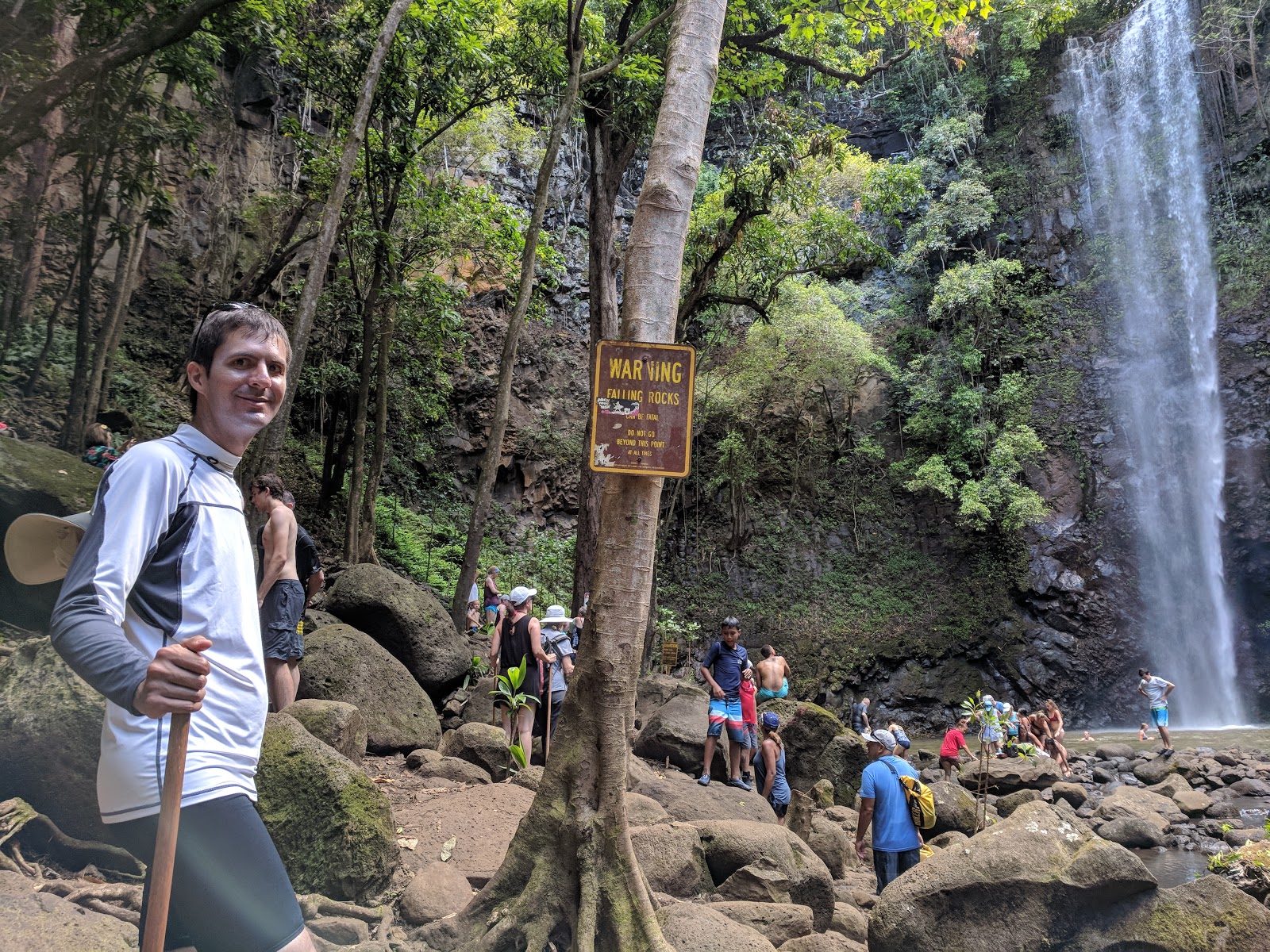 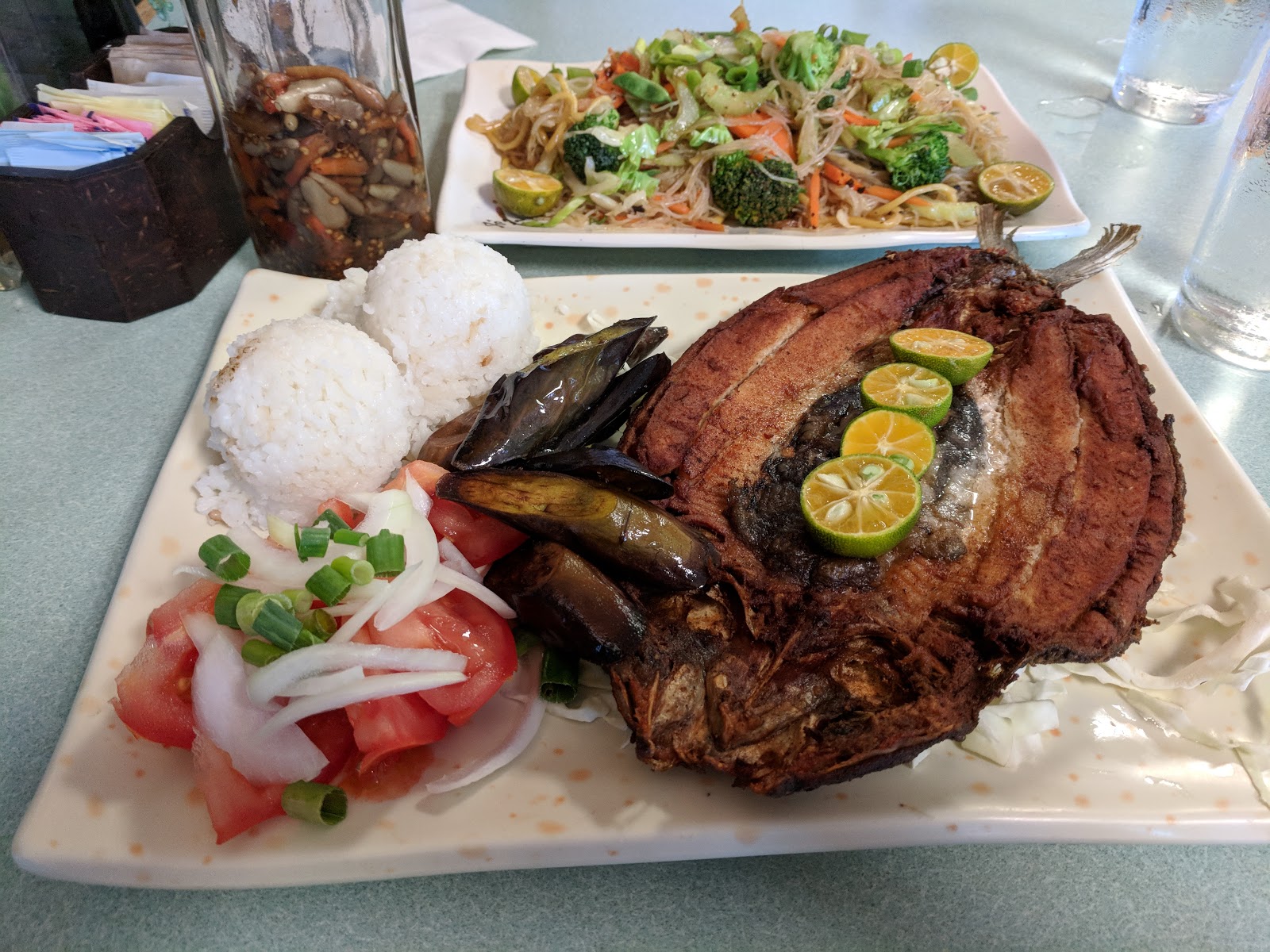 We were up early again, but this time, we were on our way to the west side of the island for our third and final snorkel trip. We went on the “Raft Na Pali Snorkel Adventure” with Captain Andy’s. The boat company asks you several times to confirm that you are physically fit enough for this trip, and tries very hard to get you to watch a video showing you what the trip is like when you book your tour. I can confirm that it is not a trip for the faint of heart, or those who don’t like getting bounced around and soaking wet, anyway! The boat is a rigid-hulled raft (also called a rigid-hulled inflatable boat), and it goes very, very fast – something like 50 mph, they said – and there is a lot of bouncing. By the end of the trip, I was pretty much sore all over. But if you like going really fast over the water, this is a great ride. As you leave the harbor, the guides warn you to put your baseball caps on backwards to prevent them from flying off. I was dubious, since I usually put my ponytail through the back of mine to hold it on, but went ahead and flipped it around. Within two seconds after the captain gunned the engines, my hat was gone. RIP, Indiana Jones hat, you had a full life, and many adventures, and it seems fitting that your final resting place is somewhere at the bottom of a shallow draft marina in Hawaii. 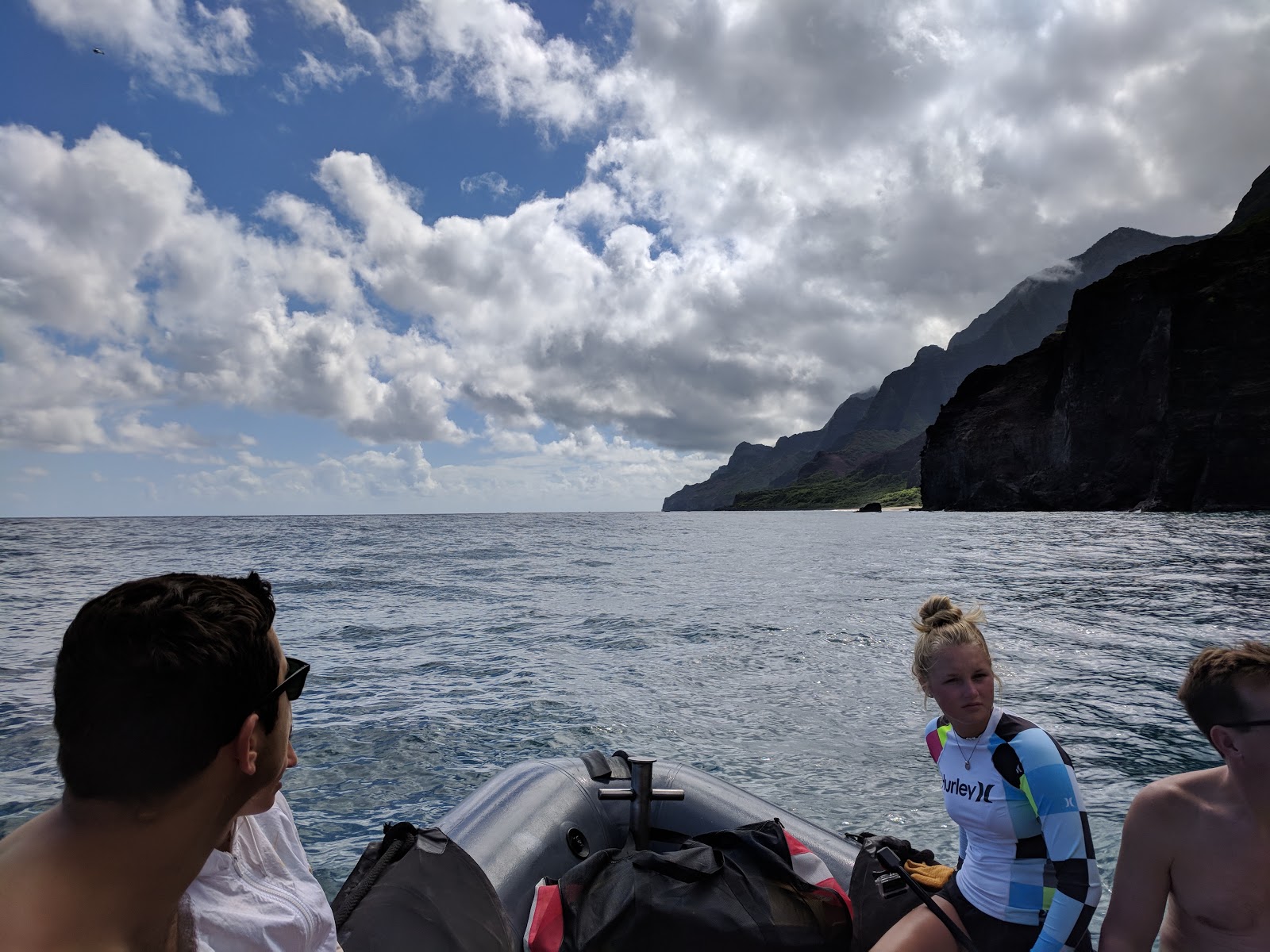 We sailed up the Na Pali coast, through pods of hundreds of dolphins, under waterfalls, into several sea caves, and through some heavy seas (think nonstop waves into your face) to within sight of Ke’e Beach at the far northern end – and then back, within about five hours. Our two guides, both fairly young guys, were cracking jokes the entire time and playing pop music from their phones over the boat’s speakers. We stopped at a couple of snorkel spots and saw sea turtles and fish, although the reef was not quite as impressive as at Molokini. The dolphins were the highlight, though, as we watched them swimming right next to the boat, jumping and, yes, spinning around. 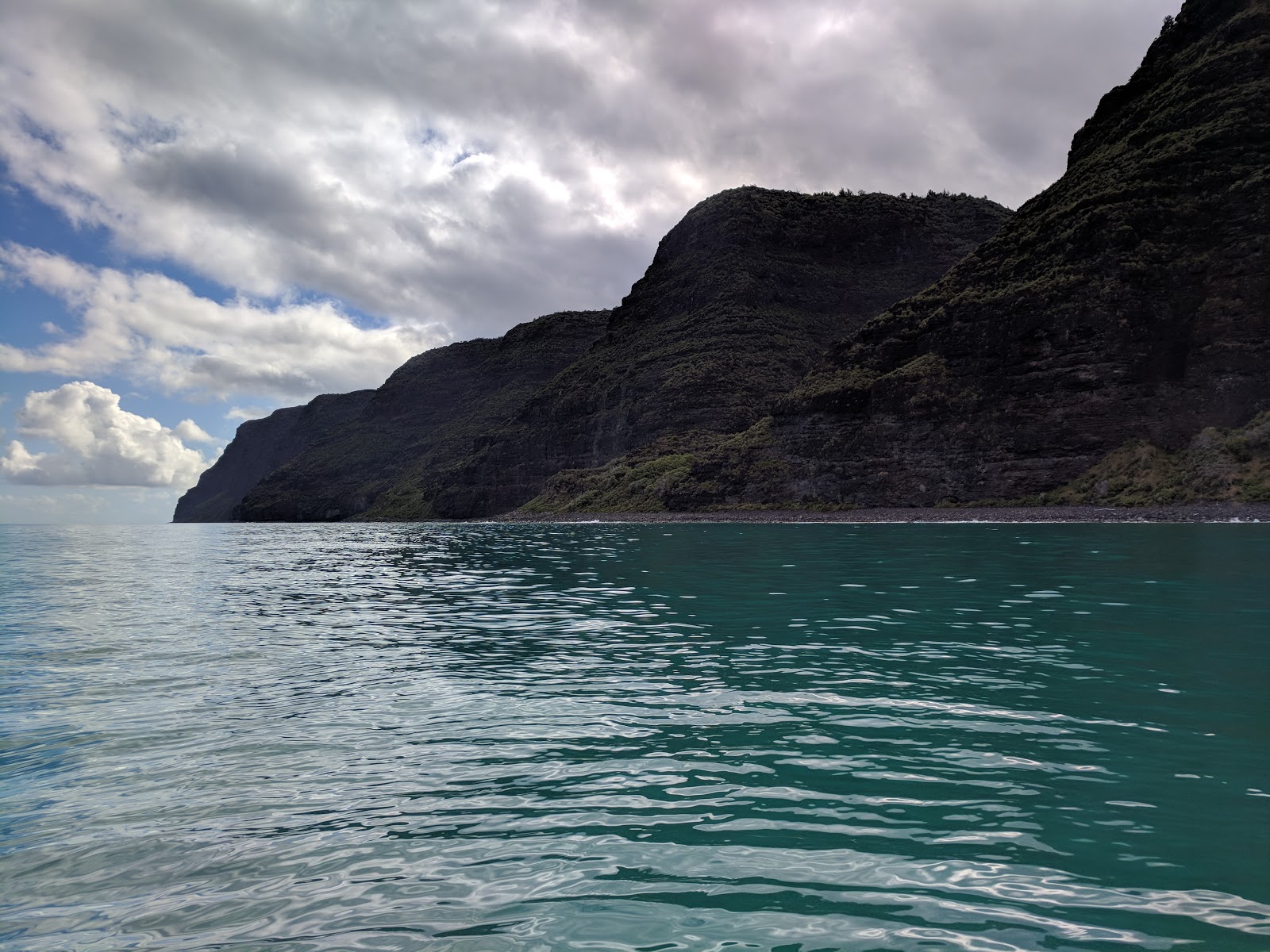 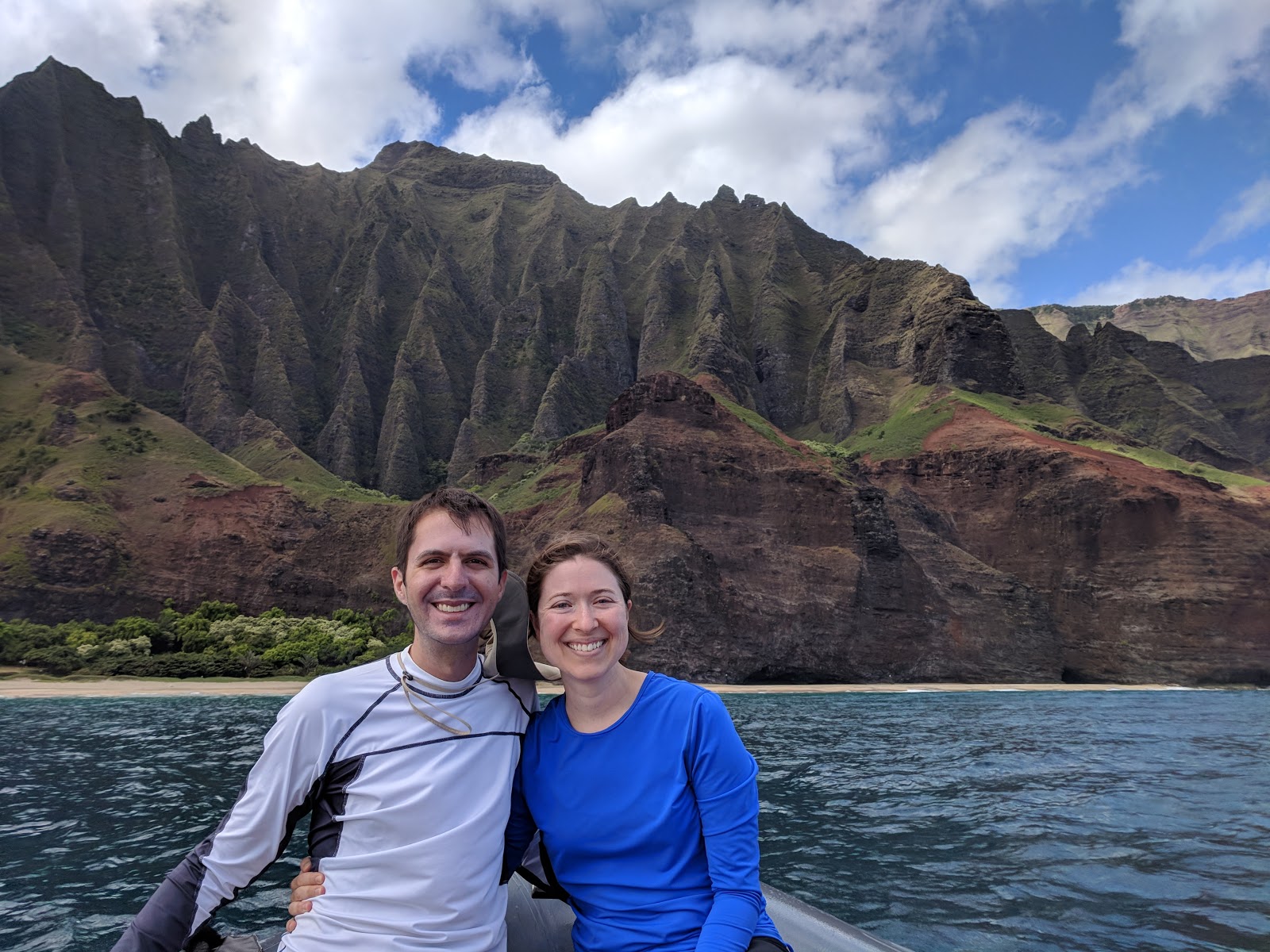 Back on dry land, I managed to get a giant inch-long splinter in my foot within moments of stepping onto the dock. Totally unfazed, one of the other captains used the sharp point of the pin of his name badge to help me get it out. Just another day on the water!

We had lunch at Ishihara Market, recommended both by Cynthia and our guides, which was a grocery store that had a deli-style counter for poke in the back. You order your food by weight, and although there is no sign indicating that you can also order warm individual servings of rice, they do have it, which makes a complete meal. I was impressed with the sheer number of options of preparations of fish. We ate at the couple of picnic tables outside, but there are probably better spots to eat nearby if you walk around a bit. On the hour-long drive back to Kapa’a, we stopped to check out the sights: The Right Slice pie shop in Kalaheo (got the pina colada blueberry pie, it was odd, we should have tried more flavors); a random county park, because none of the fine establishments near the pie shop had restrooms; many arrogant chickens invading said park; a farm that’s shown on Google Maps but doesn’t actually seem to exist (could not find it despite driving up and down the road a couple times); and Kaua’i Nursery & Landscaping, a large nursery with many interesting plants. Back in Kapa’a, we visited the Hee Fat General Store for shave ice, since the pie was not all I had hoped for. The shave ice did not disappoint: Made with real fruit, not just the standard syrup, it was really good, and the macadamia nut ice cream underneath was great too. After showers and naps, we went out for dinner and got tasty fish tacos made with ono at Sleeping Giant Grill. 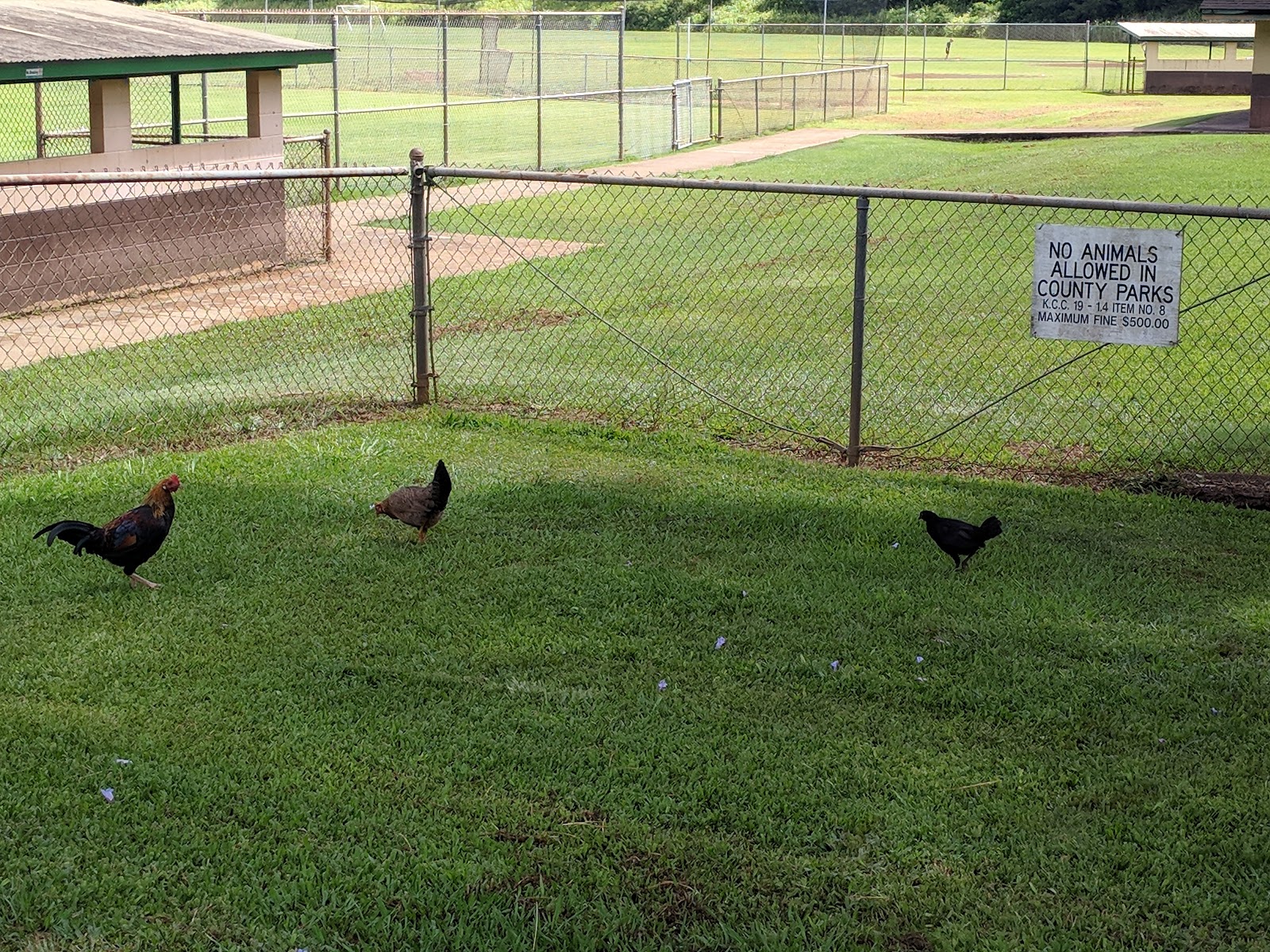 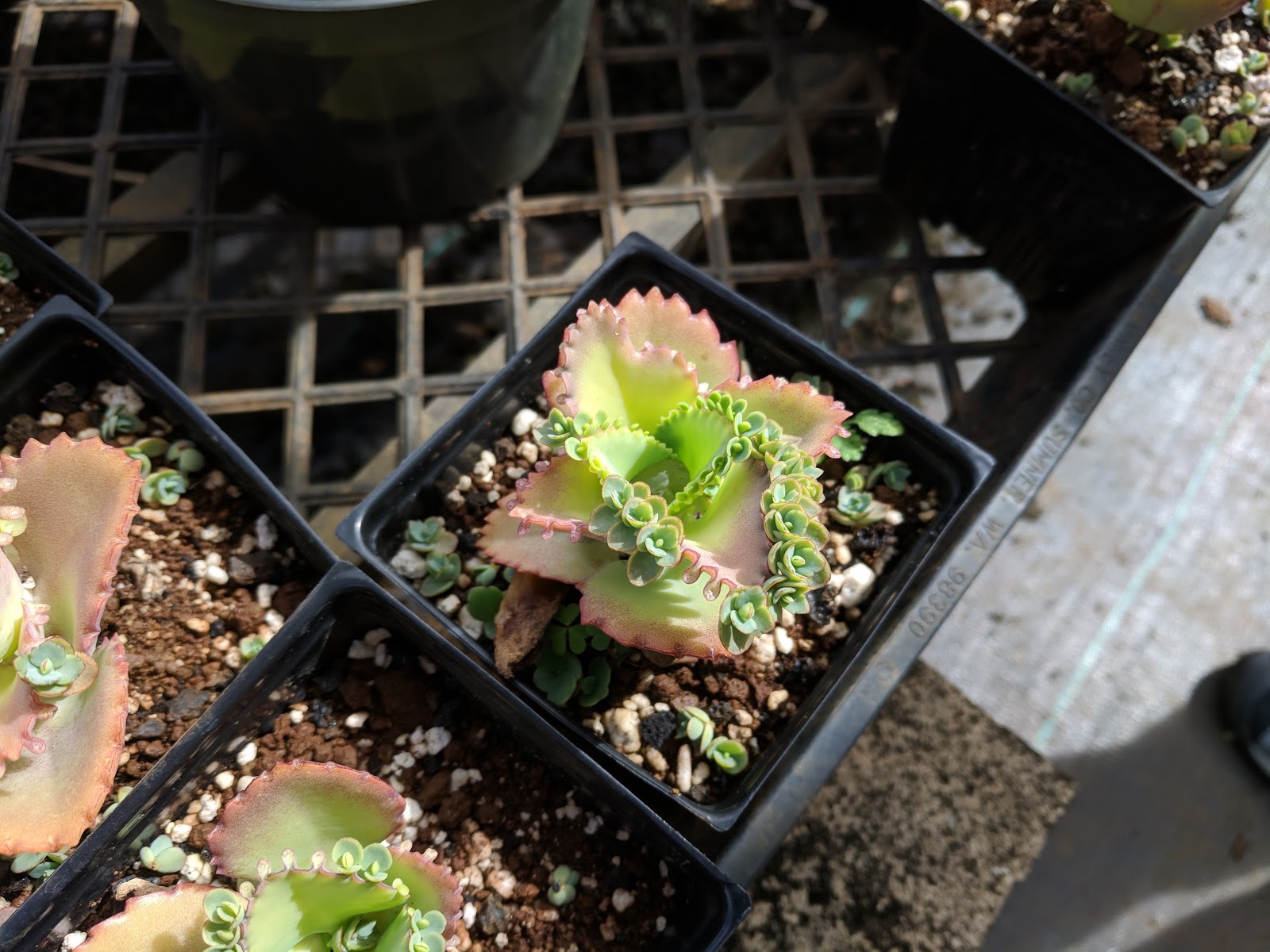 Our final full day in Kaua’i was a bit of a last-minute arrangement. We had planned to drive up to Ke’e Beach and hike the Kalalau Trail down to Hanakapi’ai Beach, which is a popular destination. Unfortunately, the flooding earlier in the year meant that the road to Ke’e Beach was still closed, as well as the trail itself. So, in our state of being sore, slightly sunburned, and bug-bitten, we decided to go with a closer, shorter hike out of one of the books we found in the Airbnb: the Kuilau Ridge Trail. We had lychees (sour, unfortunately) and pineapple for lunch, then drove to the trailhead west of Wailua, stopping along the way at the Opaeka’a Falls overlook. We made it to the top of the ridge, climbing over an enormous fallen tree along the way, then headed back down when it started to rain. Fortunately the rain was brief and we managed not to get very wet. We did finally have our encounter with the famous Kaua’i mud, which coated our hiking boots, but at least it wasn’t too bad in terms of the hike! 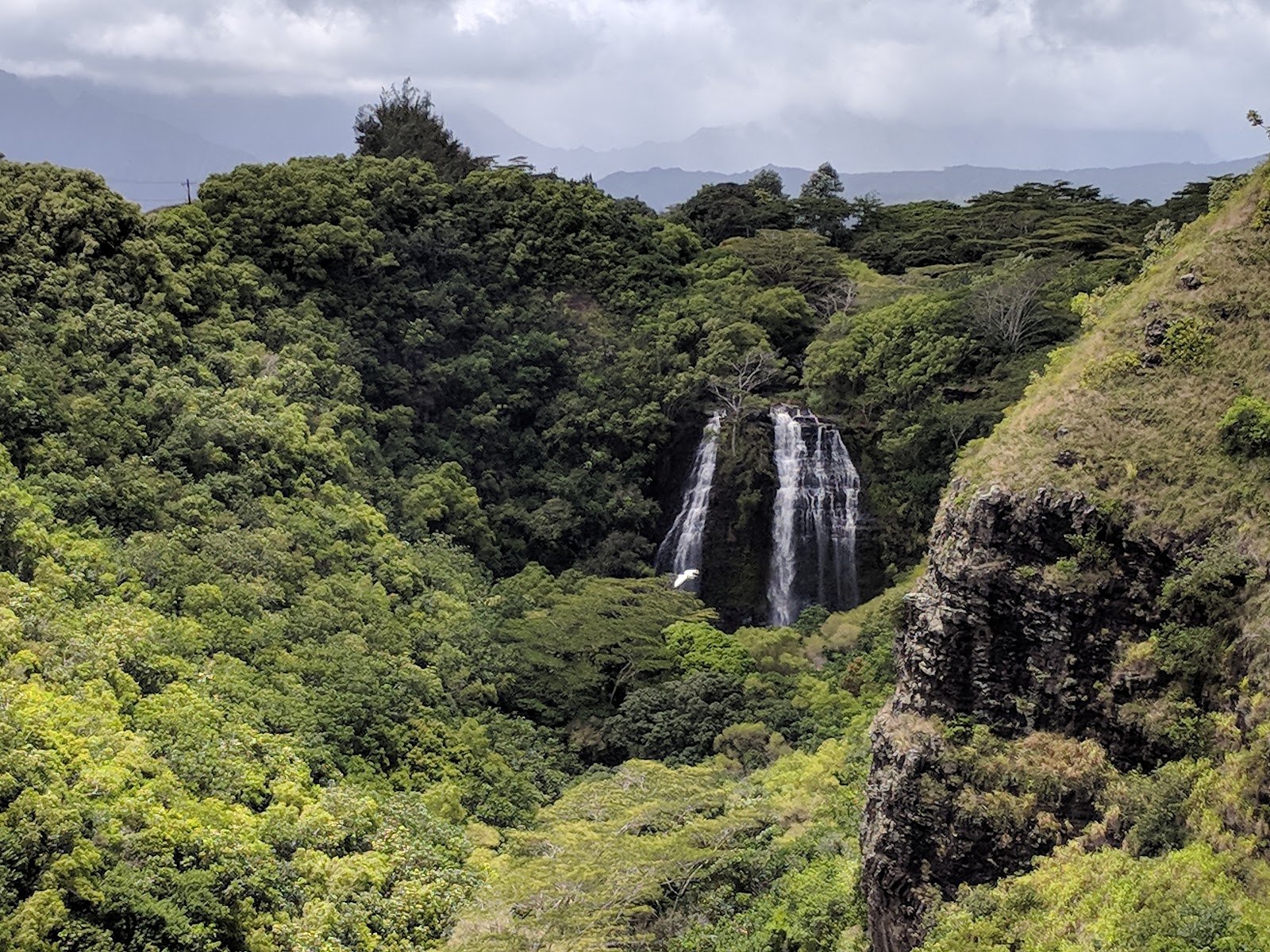 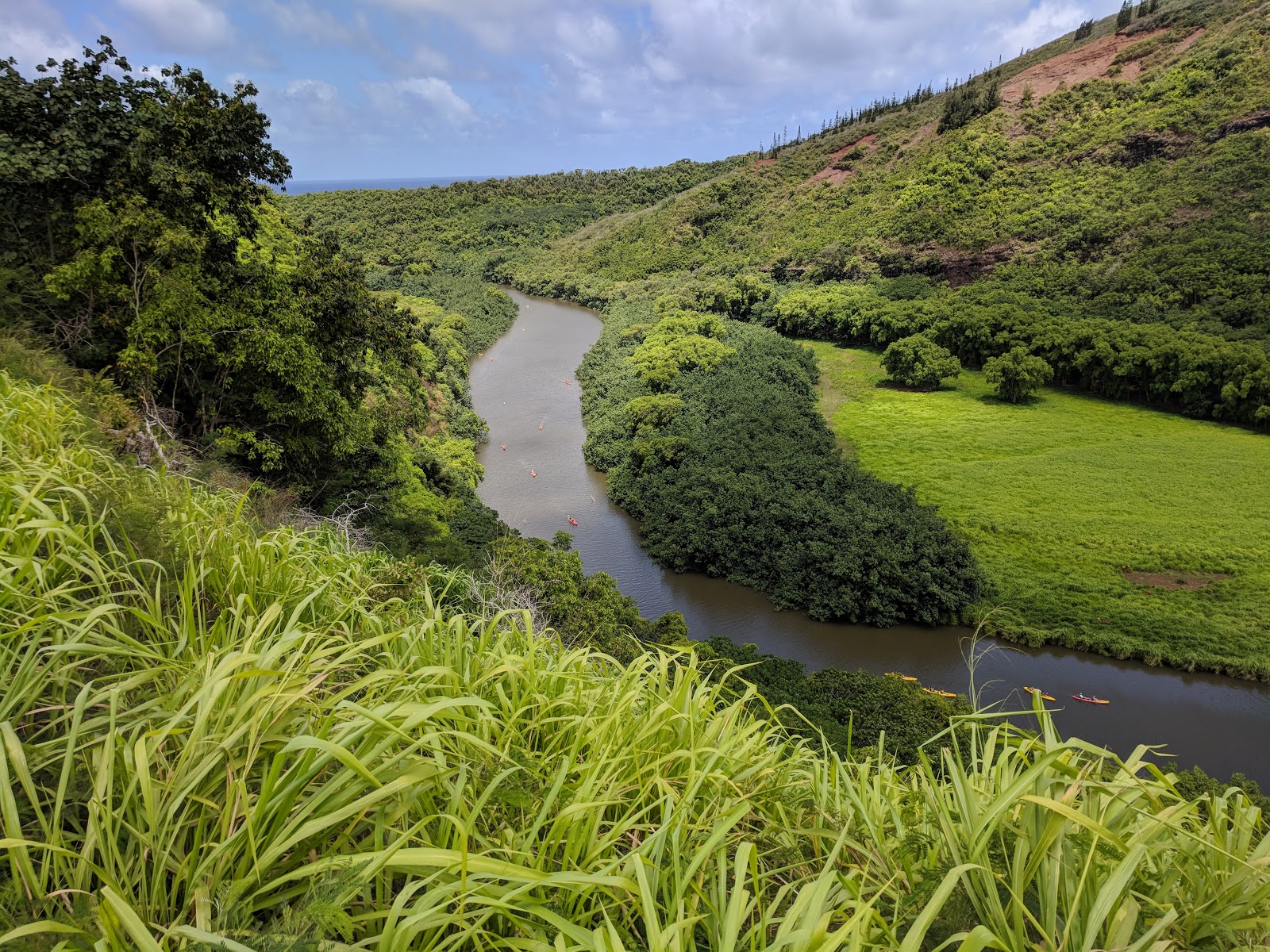 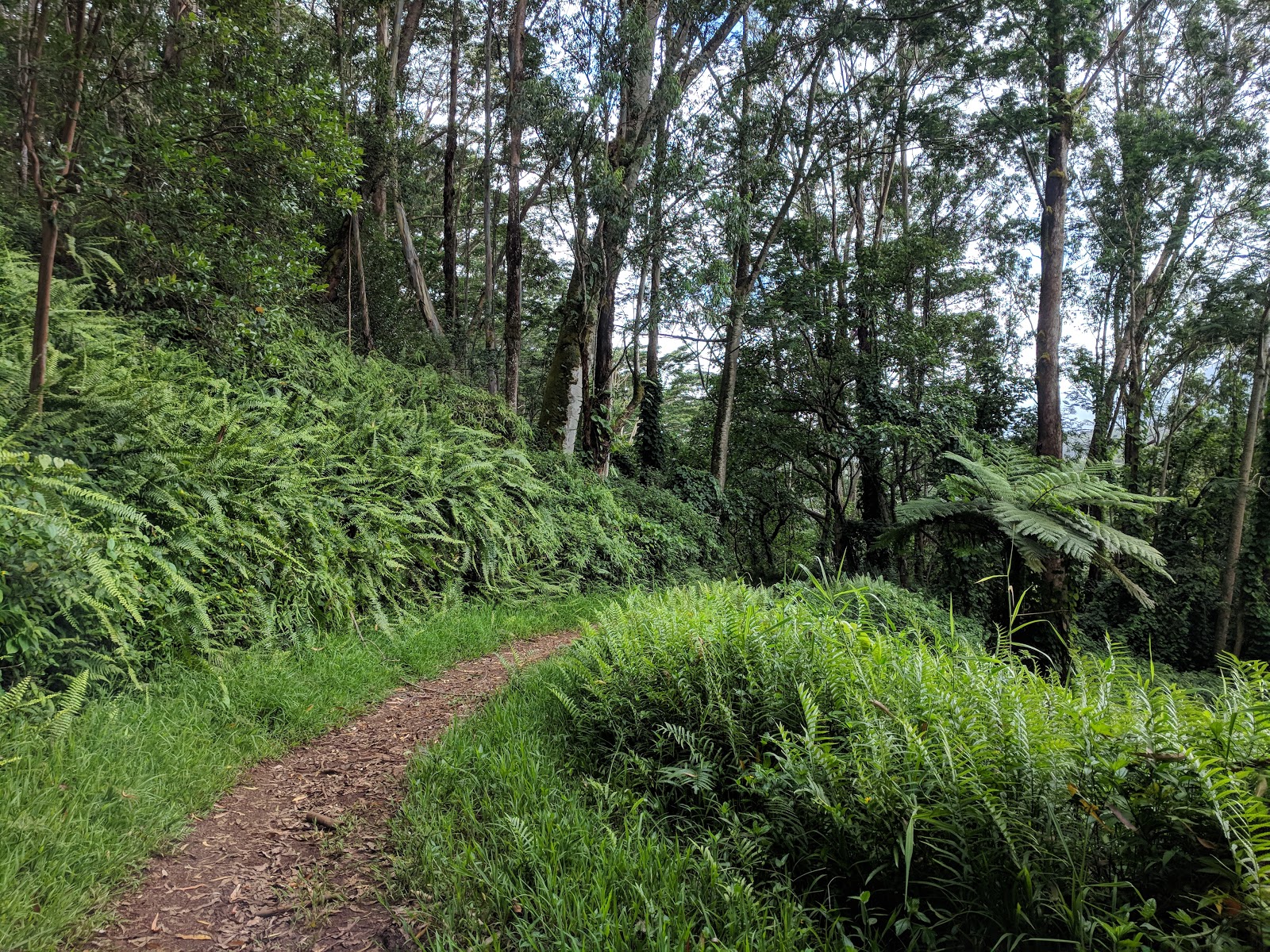 After our brief hike, it was clearly time for more shave ice at Hee Fat, then another shower and nap. We ended our trip with a moderately fancy dinner at Hukilau Lanai, another restaurant I would never have picked on my own since it was inside a resort, but which was a Cynthia recommendation and thus quite good. I finally had a long-sought non-alcoholic pina colada, which Justin said was better than the one he had at the fancy hotel on Maui (and which, I might add, he neglected to share with me, the scoundrel). I had the coconut-crusted fish which came with a mild curry sauce; Justin had the vegetarian entree, which was a sort of stir fry of vegetables and quinoa with a lime sauce. All in all, it was a relaxing final day. 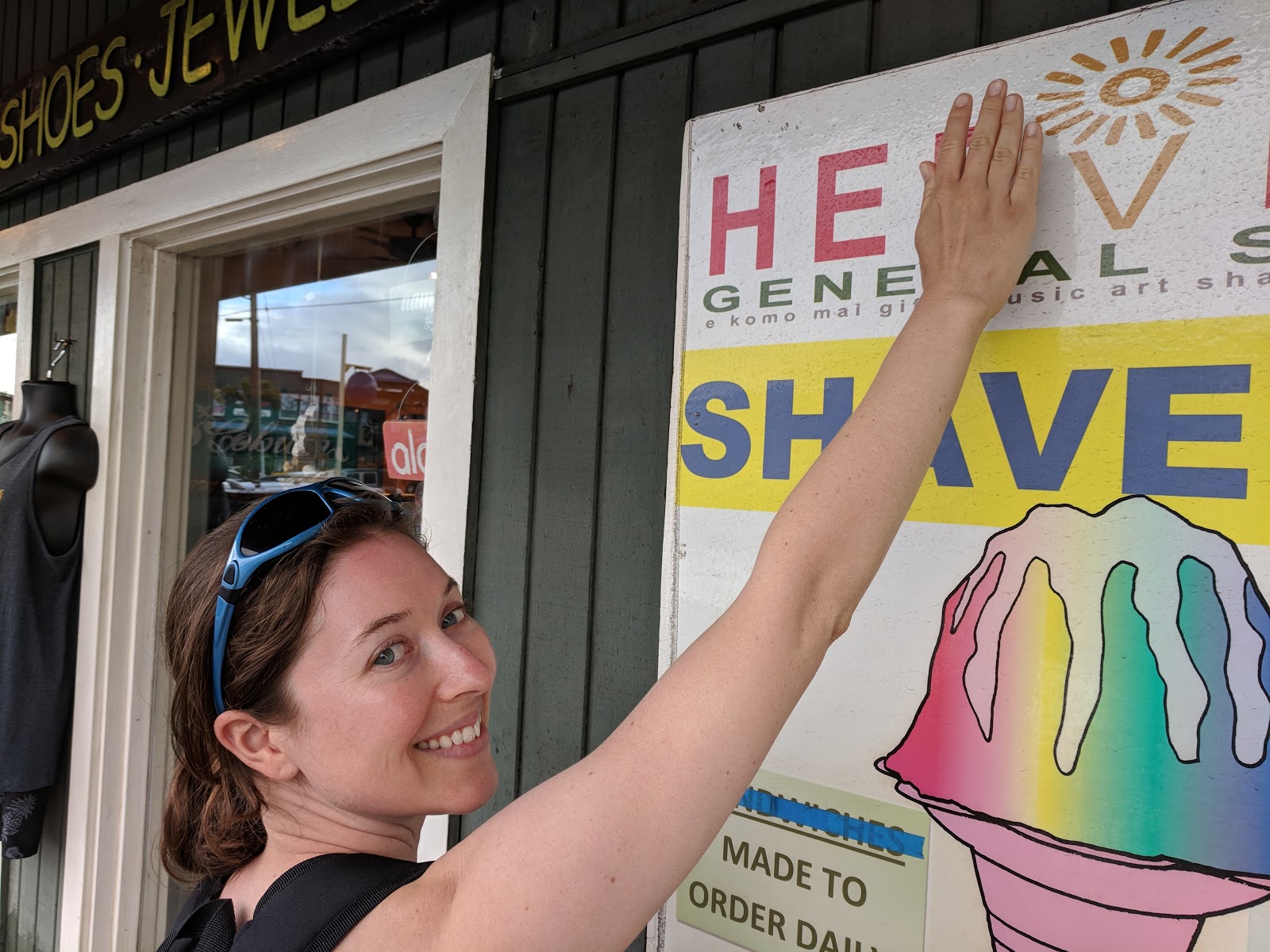 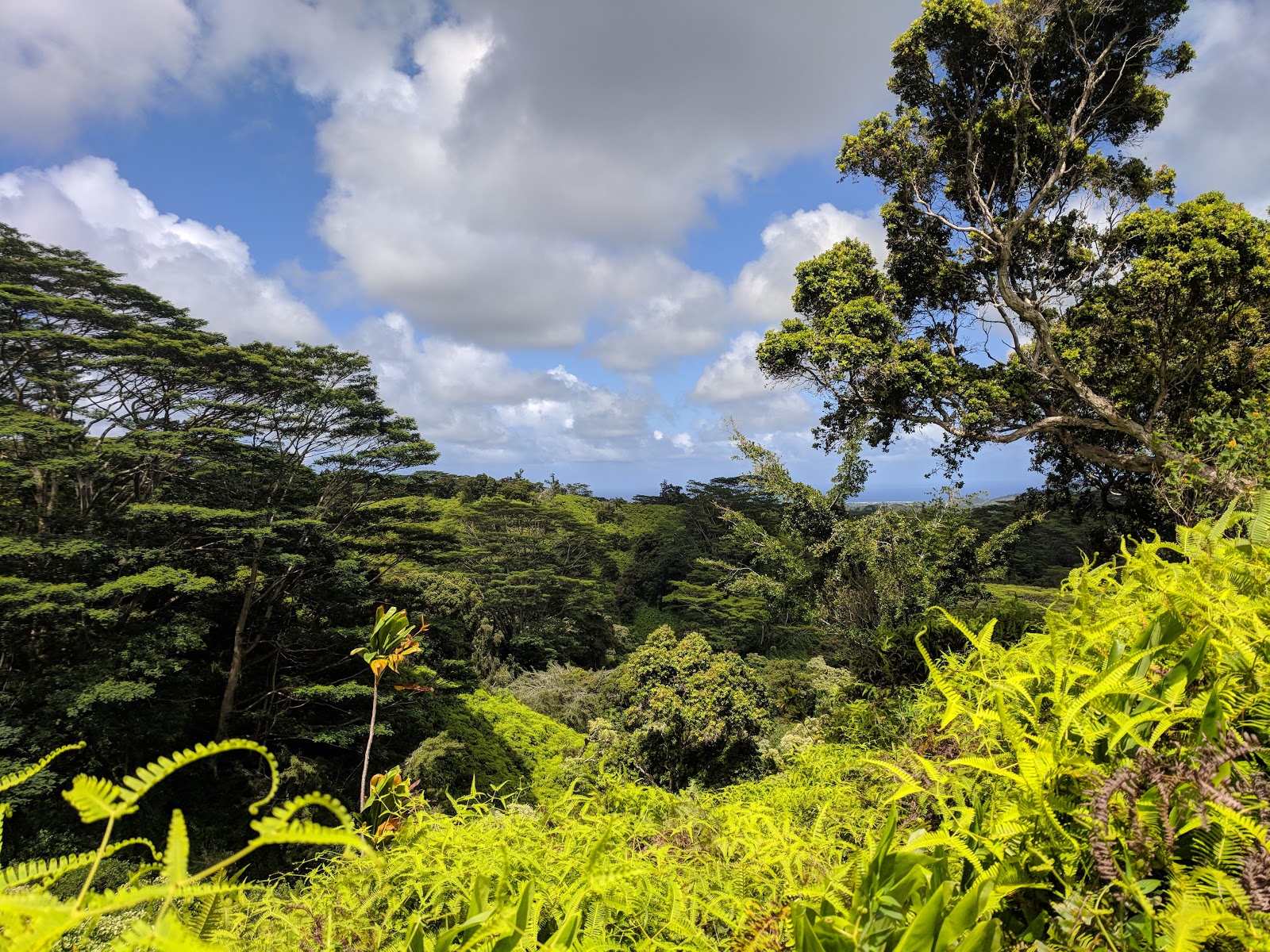 We packed up, returned the car, and then ate nearly an entire pineapple at the airport so we wouldn’t have to bring it through agricultural inspection. Full of pineapple and satisfaction, we boarded our flight back.

Missed the first part? Back to Part 1

Just like seeing the photos? Here are some more