It seems like just weeks ago that I was putting together my summer voter’s guide for the primary, but here we are already at the November election. With just a few days left to go, I guess it’s about time I figured out who and what to vote for! I’m in Mountain View, so a few of my ballot measures are local, but I’ve put those at the end. In general, I support more housing close to jobs; candidates with experience over total newcomers; and align with SPUR, YIMBY, and the Democrats. For a good online resource to look up candidates, check out Voter’s Edge: https://votersedge.org/en/ca 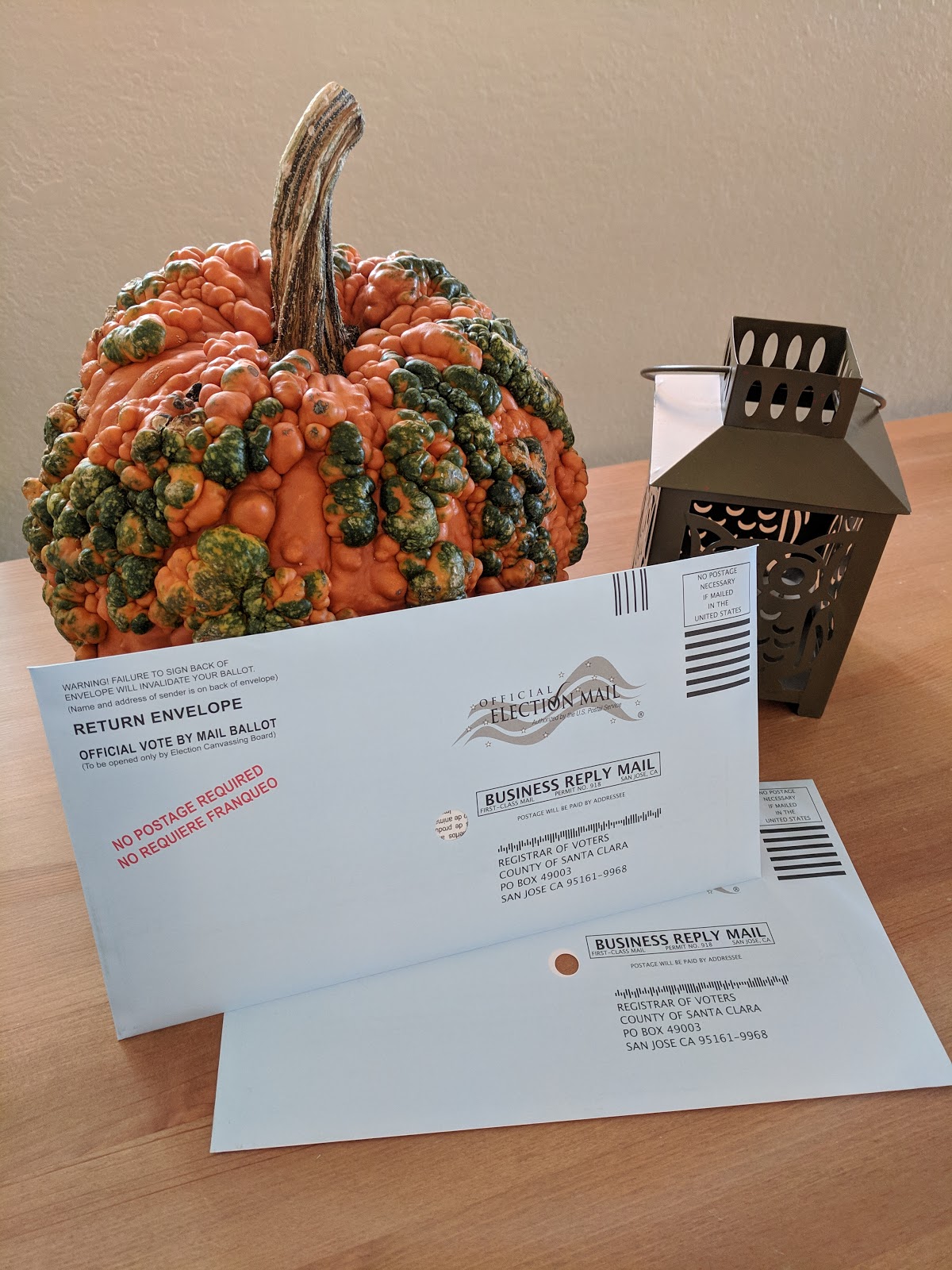 The only places where I disagreed were as follows:

Lt Gov: I thought both candidates were strong, but was dismayed by Eleni Kounalakis' lack of experience in elected office (most of her experience in government is in appointed positions) and in the fact that she provided most of her campaign funds herself, as compared to her opponent, Ed Hernandez, who has experience in elected offices and did not provide millions of dollars of his own money to fund his campaign. So I went with Ed Hernandez. Not a great reason, I admit, but I think either of them will be fine.

Judges: I voted to continue all the judges except Justice Carol A. Corrigan. In 2008, she dissented from the opinion to allow gay marriage in California. Justin read her entire dissent and we thought she was fundamentally misguided in her interpretation of how the State Supreme Court should interpret and enforce the law. My opinion is that the Supreme Court justices should be willing to take action to ensure that the laws are fair, just, and reasonable, and not just enforce laws that are wrong. She appears to have dissented because she feels differently about this role. I think this is enough to support voting against her.

Measure 11: I voted no, because I thought the arguments against this measure described in the guide above were more compelling. This should be left to the legislature and worked out with the union.

Measures I am particularly concerned about:

Measure 5 - Please oppose this! I oppose Prop 13, which is part of why we are in the mess we are about housing (by keeping property taxes artificially low, it decreases mobility, reduces ability for new people to find housing, and deprives local communities of needed tax dollars), and this measure would expand Prop 13. This is a definite “no” for me.

Measure 6 - This is attempting to roll back a law that was just enacted last year with major support. We need this transit money, and gas taxes are the way to do it, for now. This is a definite “no.”

I relied on SPUR and somewhat on the advice of South Bay YIMBY (https://southbayyimby.wordpress.com/endorsements-2018/) and TransForm (http://www.transformca.org/transform-blog-post/transforms-november-2018-voter-guide), although I disagree with TransForm on Prop 10 because I oppose rent control, on economic grounds (refer back to the guide at the top of this post for a good discussion of why). I also relied on advice from some friends who are more active in the local political scene.

Mountain View-Los Altos UHSD: My friend recommended everyone but Steven Nelson. Reading his information submitted on Voter’s Edge, he does seem a bit crazy. But I did not like Catherine Vonnegut and how the past school board, of which she was a part, handled the math teaching changes and principal staffing, so I voted for Nelson instead of Vonnegut.

Mountain View-Whisman SD: My friend recommended Devon Conley and Greg Coladonato. I couldn’t find any good reasons to vote for Coladonato, so I voted for Conley and Tamara Patterson, who seems invested specifically in the school district and isn’t just running so he can get another elected position, like Coladonato seems to be doing.

Sheriff: I voted for John Hirokawa, as I discussed in my write-up of the primary race this summer.

Mountain View City Council: I followed the MV Voice and my friend’s recommendations for Lucas Ramirez, Pat Showalter, and Lenny Siegel as the most pro-housing candidates. They are also the recommendations of the SCC League of Conservation Voters, for the same reason. https://www.mv-voice.com/news/2018/10/25/editorial-showalter-siegel-and-ramirez-for-city-council

El Camino Healthcare District: Having no strong opinions on this, I followed my friend’s recommendation for Peter Fung and Mike Kasperzak.

So there you have it, now get out there and VOTE!