This is part 2 of a multi-part description of my trip to Kyoto and Tokyo, Japan, as part of my Kinne Traveling Fellowship grant through my studio at GSAPP. You can read the first post here. To see all my photos from Kyoto, visit my Google+ album here.

Our second full day in Kyoto. This time we checked out the southern/southeastern part of the city, visiting Fushimi Inari Taisha (Grand Shrine), Tofuku-ji, and then back in downtown, Nijo-jo (Nijo Castle). Fushimi Inari is a Shinto shrine dedicated to the deity Inari, whose messengers are foxes (kitsune). There were fox statues everywhere! This shrine is the chief shrine to Inari, and is distinctive for its thousands of vermilion torii, or sacred gates. Torii are present at every Shinto shrine, but here it’s traditional for families and even corporations to donate them, so there are tunnels of torii lining the pathways. The shrine grounds encompass a mountain trail lined with smaller shrines and rest stations. We walked up for only about 20 minutes or half an hour, then headed back. It’s a beautiful place, and if we had more time, I would have wanted to complete the entire hike. After visiting, I would say that a trip to Fushimi Inari should be… mandatorii. Or perhaps… obligatorii. Either way, I might describe our visit as… revelatorii. 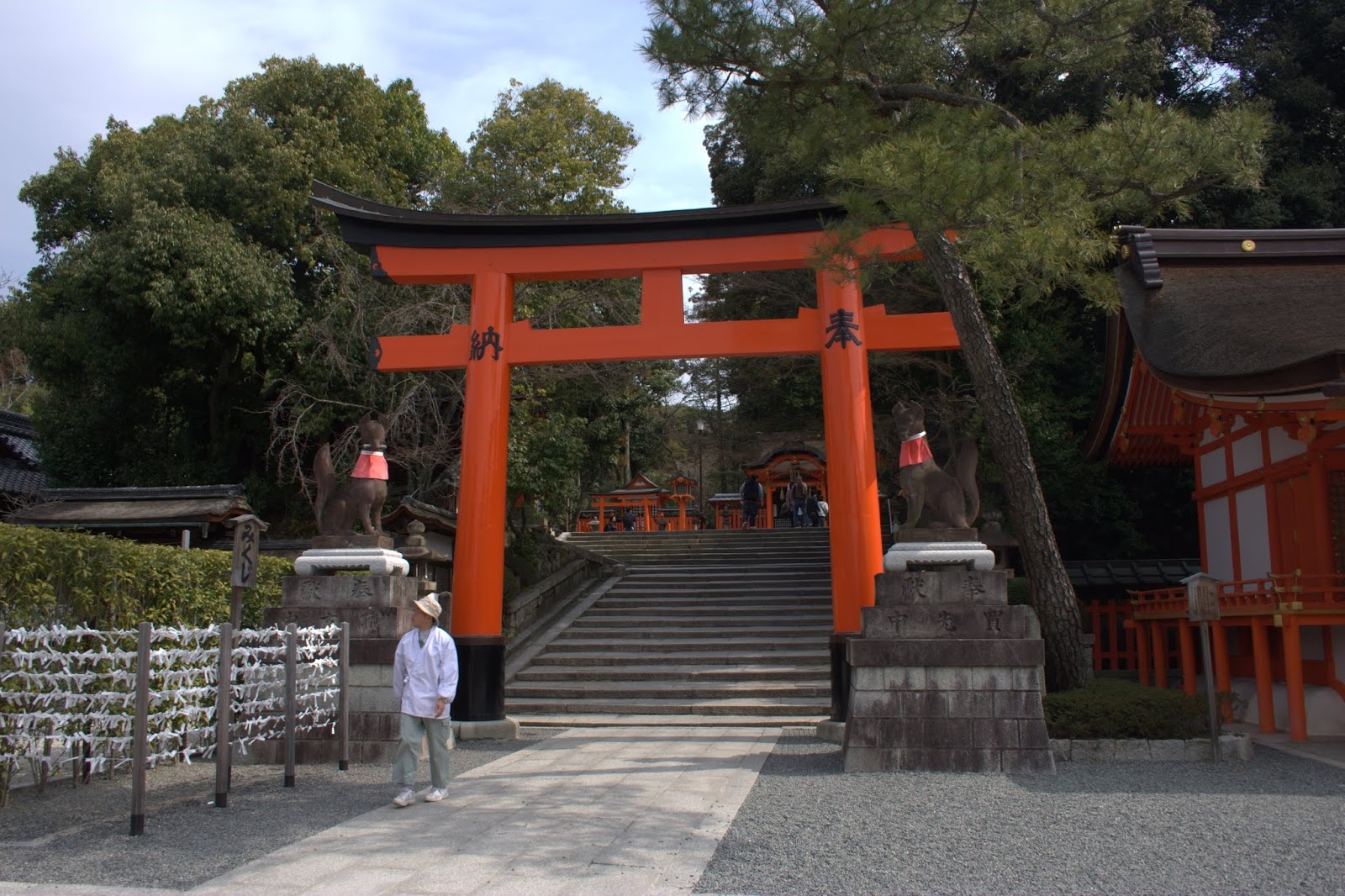 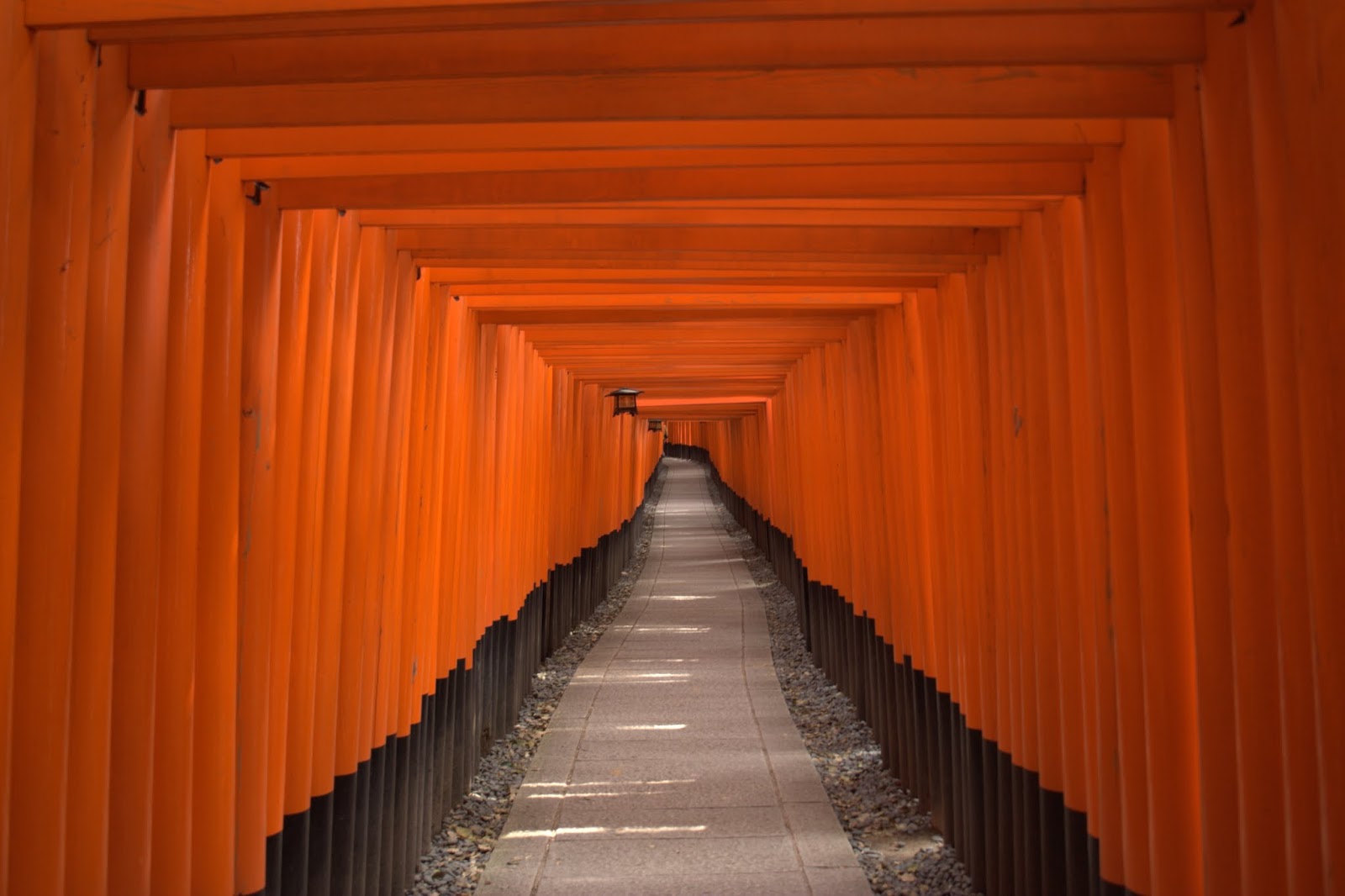 We then walked to our next stop, Tofuku-ji, another Buddhist temple. This one had multiple gardens, and gardens on every side of the abbot’s quarters, which was quite beautiful. There was a rock garden and a moss garden, and across the ravine, a landscape garden. The gardens and buildings were all connected by covered walkways, which we especially appreciated since it rained while we were there. Inside the main hall, there was some kind of class or event going on, with many people, mostly women, creating ikebana, or flower arrangements. It was fun to watch them at their work! 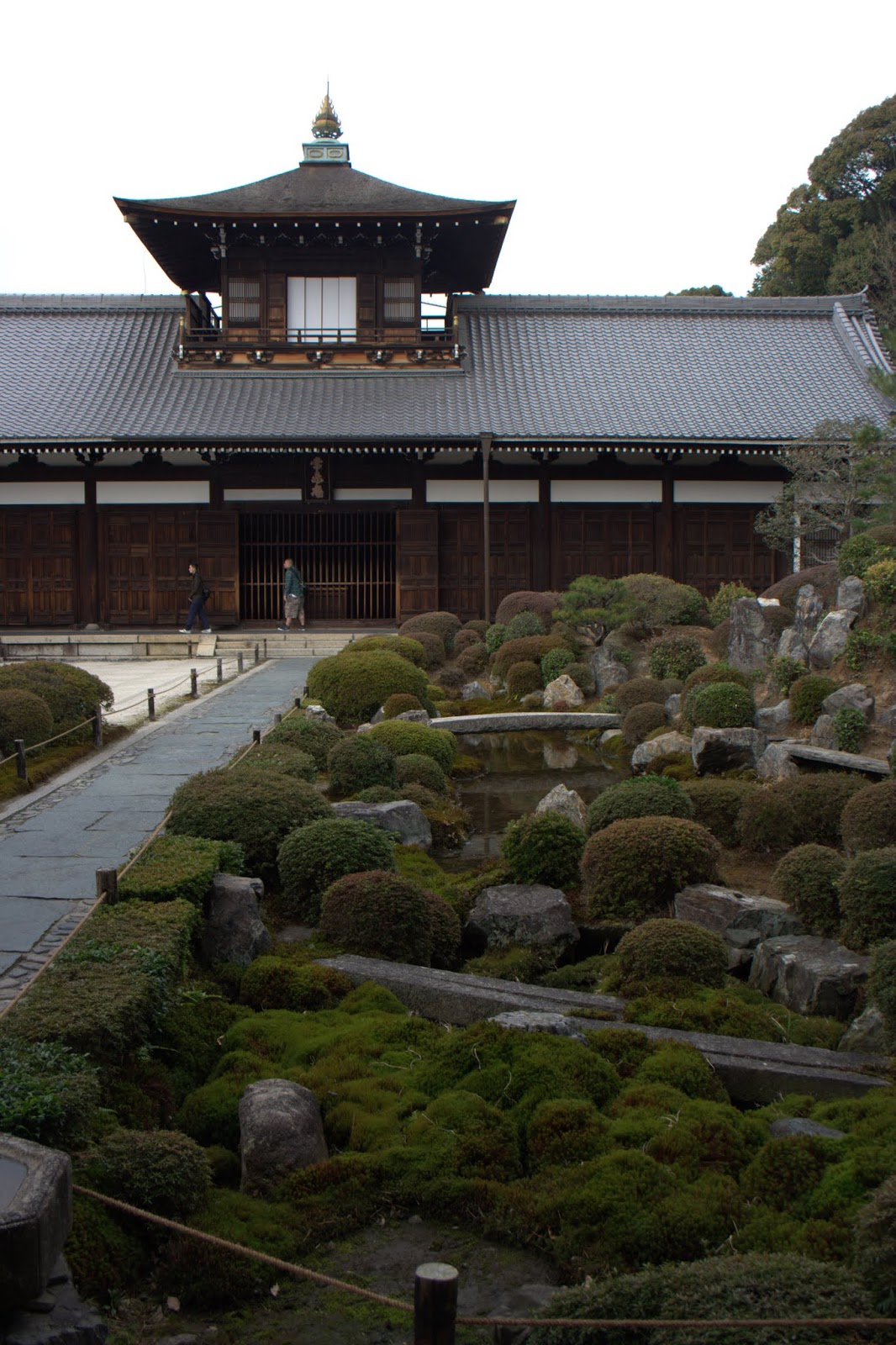 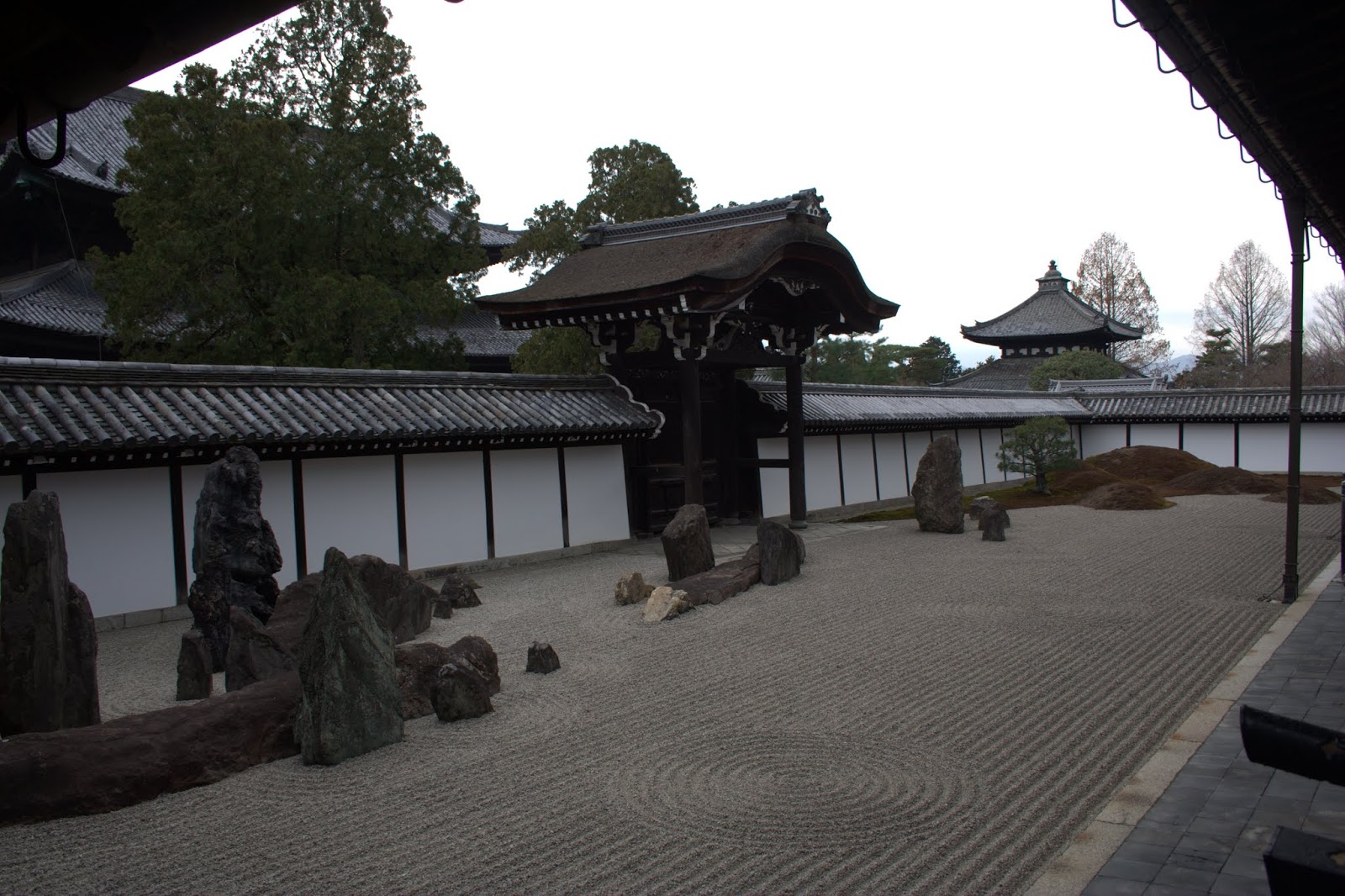 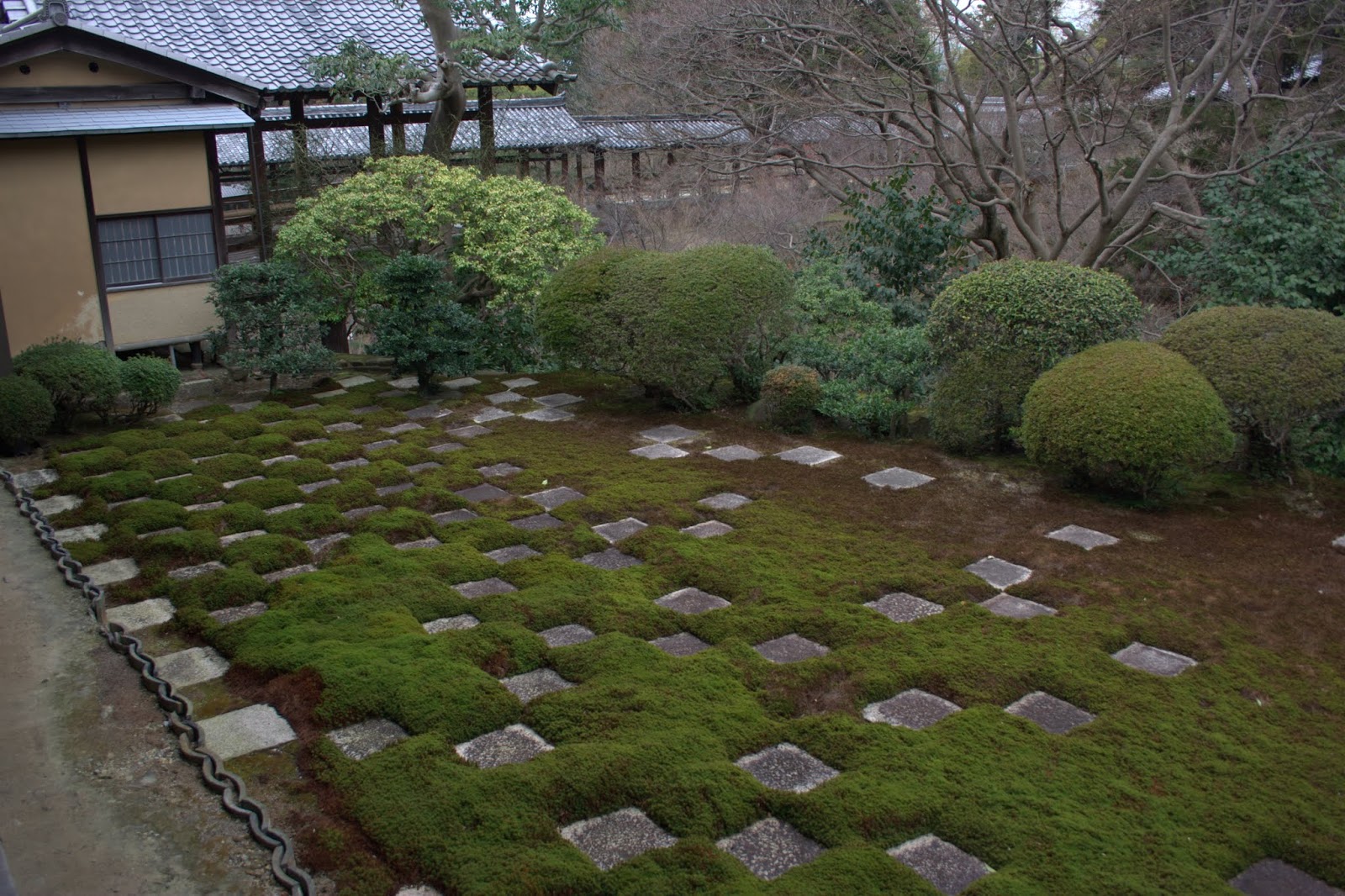 The rain stopped and we were ready for lunch. On our way back toward the train station we ran into a recommended restaurant from the Kyoto Lonely Planet guide, called Cocohana, serving Korean food, so we headed in. The restaurant is in a converted house, which is cool, and the food was great. There was also a birthday party or some kind of children’s event going on with lots of little kids running around, which was kind of cute.

Hoping that the rain would hold off, we decided to make a last stop at Nijo-jo, the shogun’s castle in downtown. But when we emerged from the subway, it was pouring rain. We made a run for it and managed to get in before the last entry, and walked through the main castle building, but with the rain it was dark and hard to see inside. In order to preserve the wall paintings, there are no internal lights. The castle is huge, though, and the floors are interesting because they were built to creak on purpose, apparently to warn the shogun of any intruders. After the castle tour we sat in the lounge area hoping the rain would stop, but it didn’t, so we went back to the hotel without seeing the grounds. Next time, I guess! 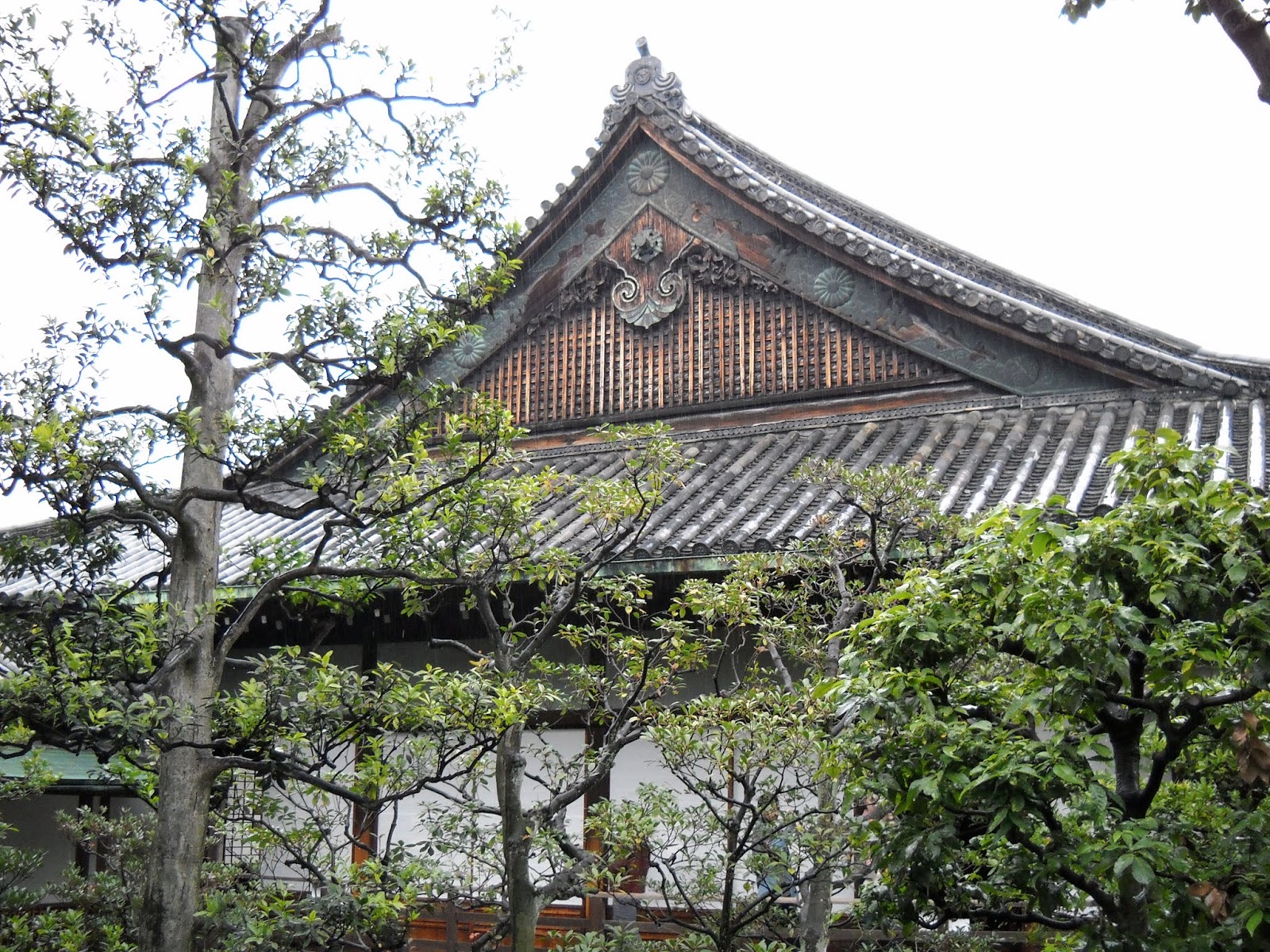 At dinner we went to another restaurant from the guidebook, hoping for another hit, and found a cheap, tasty Japanese restaurant down the street from our hotel. Success. I recommend the Lonely Planet guidebook if only to help navigate the hundreds of restaurant choices!

Justin & I headed out on our own to see the city of Nara, the old Japanese capital before Kyoto (which was itself the capital before Edo/Tokyo). Nara is about an hour away by train, and is known for its monuments in Nara Park, including Todai-ji, Kasuga Taisha, the Nara Museum, and Kofuku-ji. It’s also known for its wandering sacred deer. At Nara station, we took the city loop bus up to Todai-ji and worked our way back to the station from there. Todai-ji is truly an impressive temple, whose enormous daibutsuden, or Buddha Hall, houses an equally enormous Buddha (or “Big Buddha,” as it says on one of the signs). The giant bronze Buddha is flanked by gold-leafed bodhisattva. One of the pillars in the hall has a pretty large hole in it, and according to legend, anyone who can fit through this hole, supposedly the same size as the Buddha sculpture’s nostril, will reach enlightenment. We watched with amusement as one father helped his small child climb through it several times, and then with even greater amusement as several young women and even a couple of young men squeezed through on their stomachs. We didn’t try ourselves. 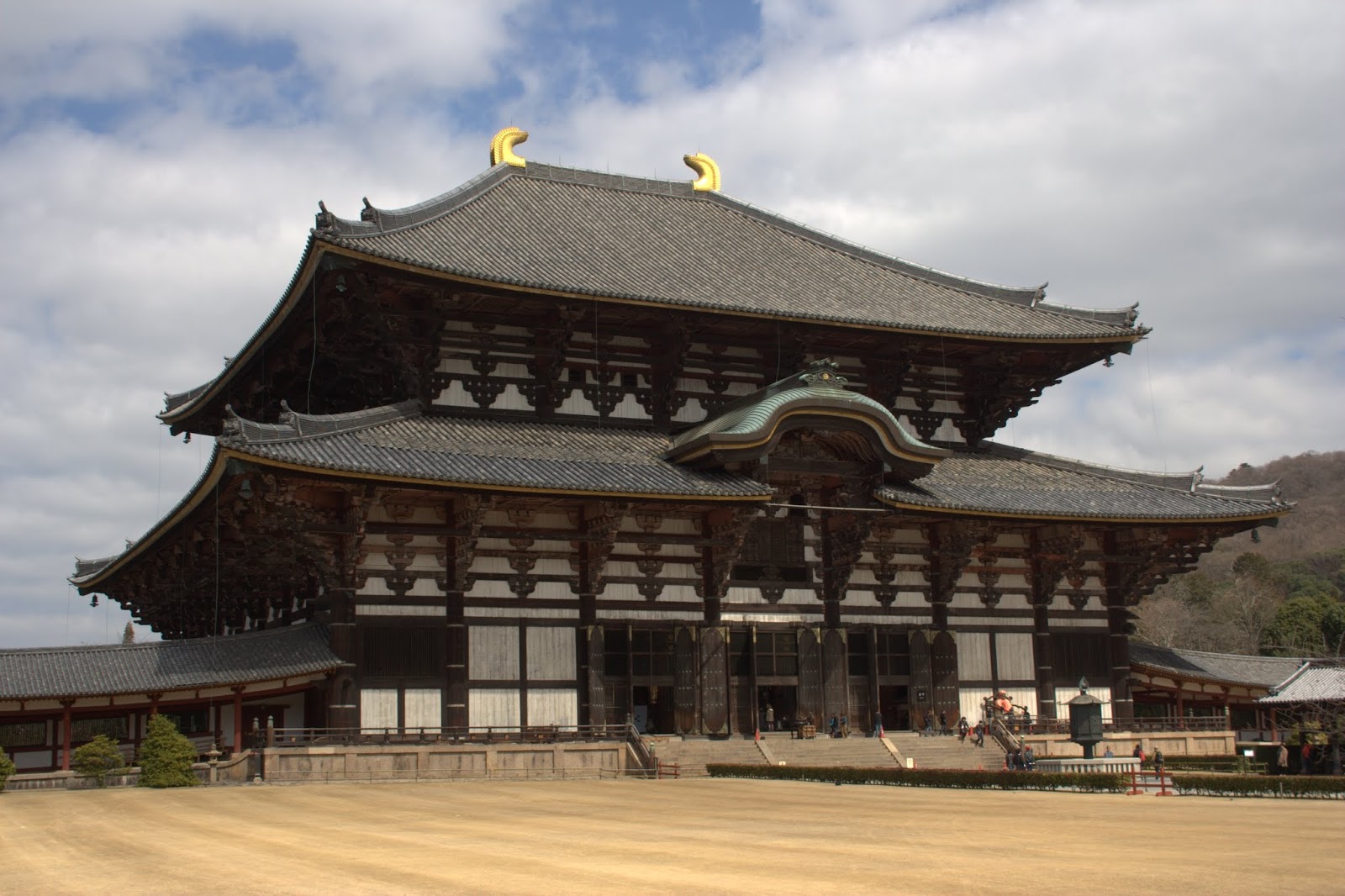 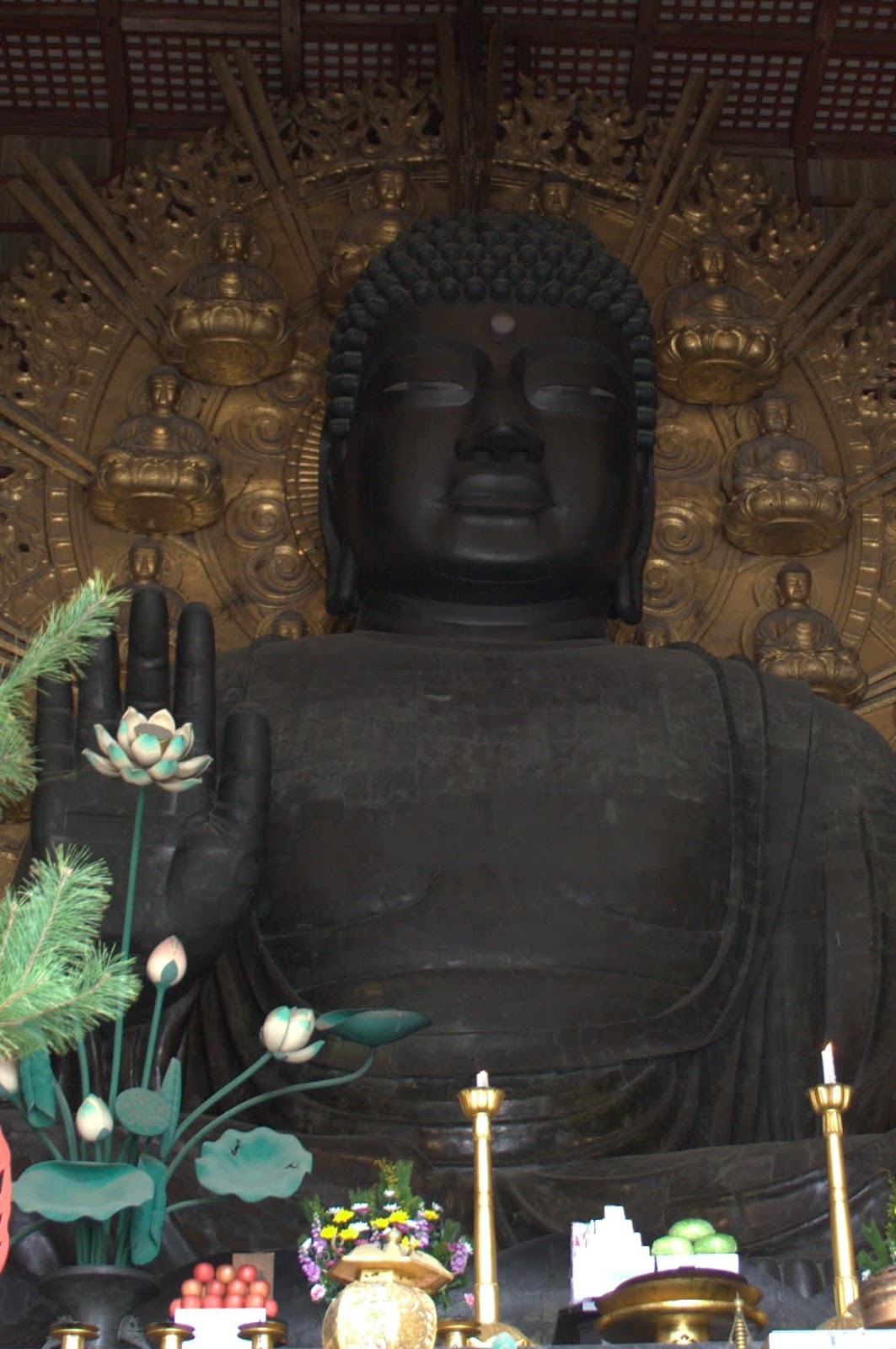 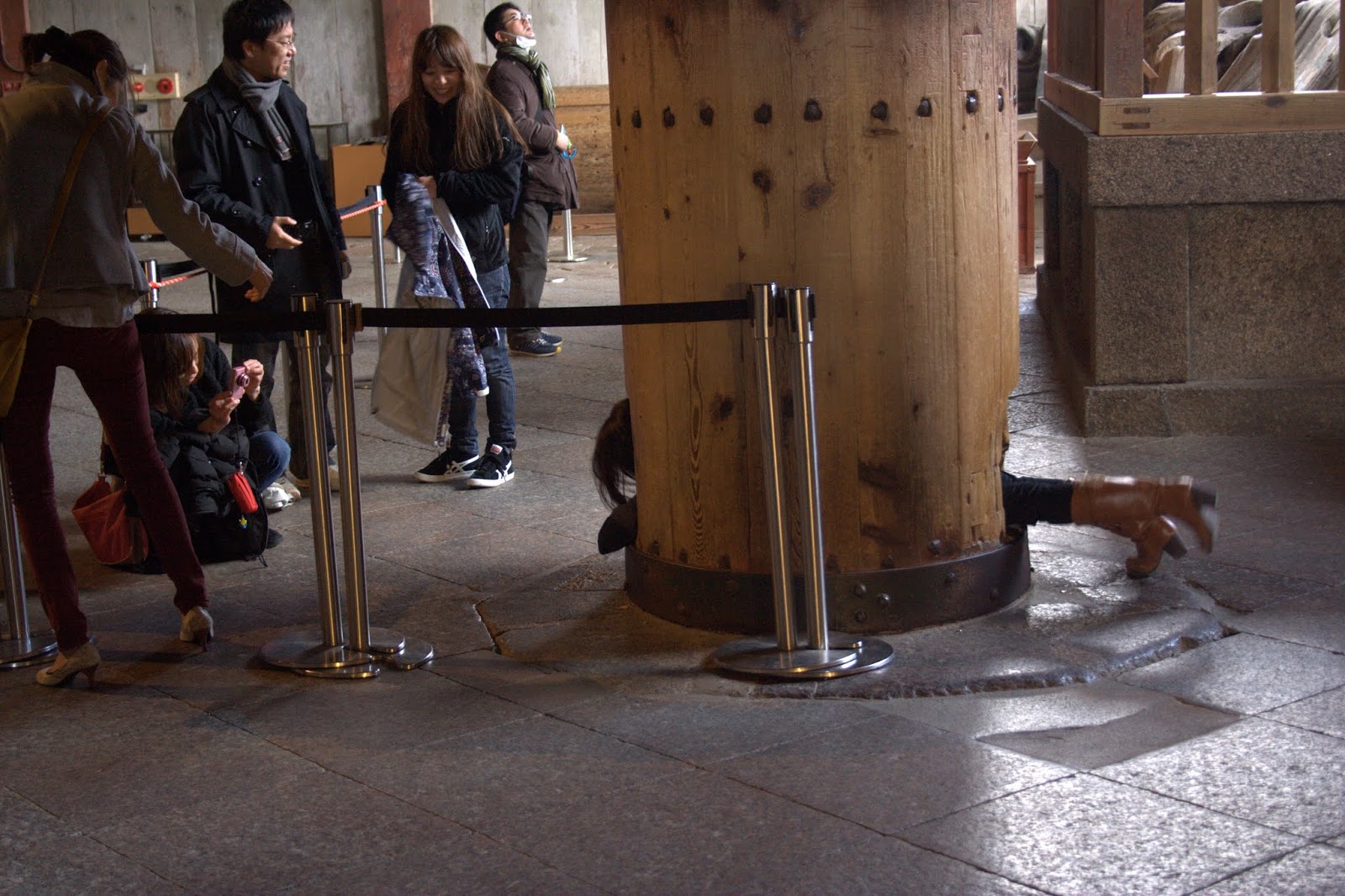 After visiting the daibutsuden we wandered through more of the temple grounds, up a lot of stairs to some outer buildings where there was a nice view over the valley. We didn’t really know where we were, but a very helpful man, who apparently volunteers as a YMCA guide, explained the significance of the buildings to us, and directed us to one of the pavilions where there was free hot tea for visitors – although you have to wash your cup afterward. He described some of the festivals and how each pavilion is named for a different month and used for different annual events. Pretty cool! 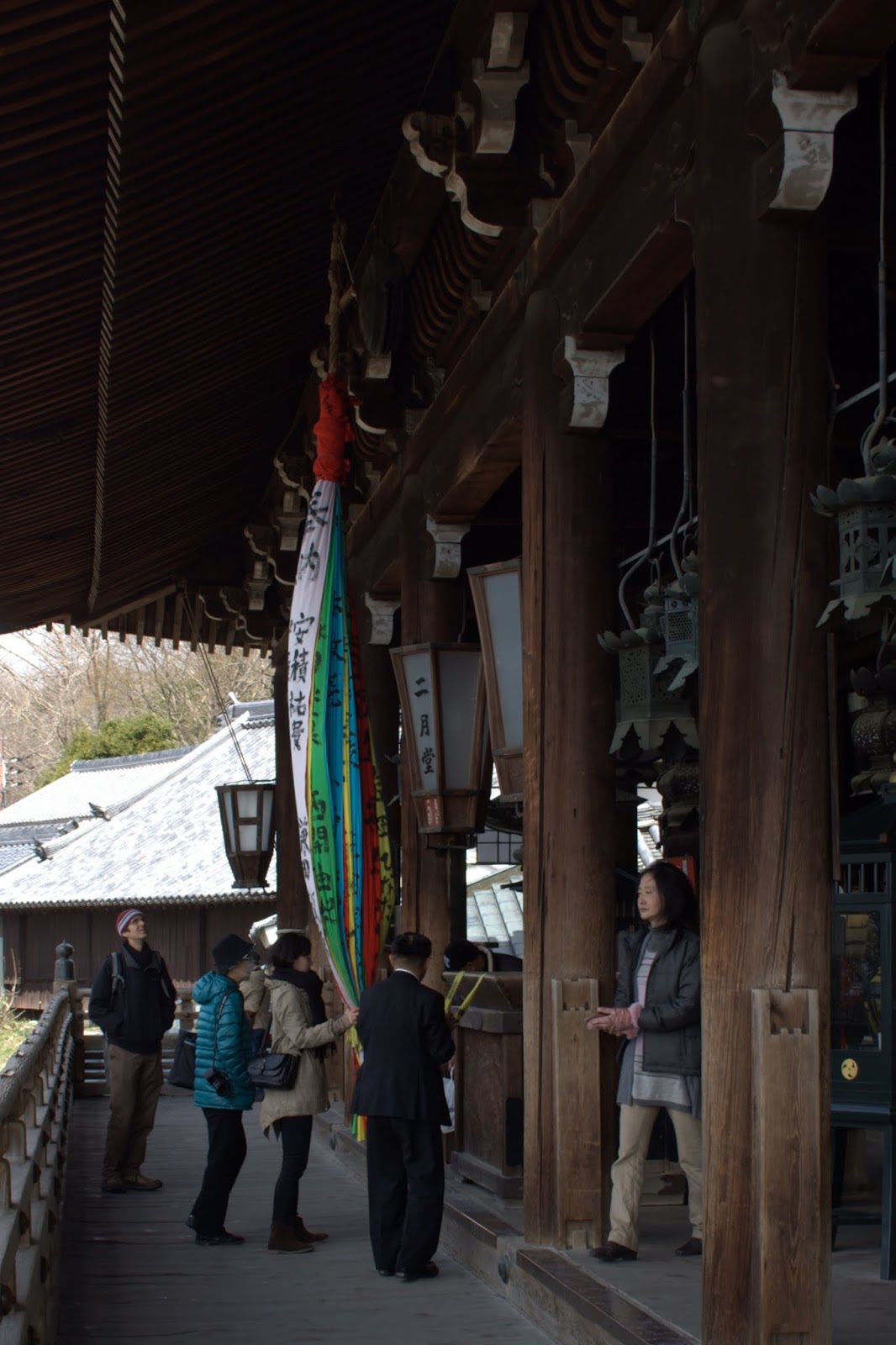 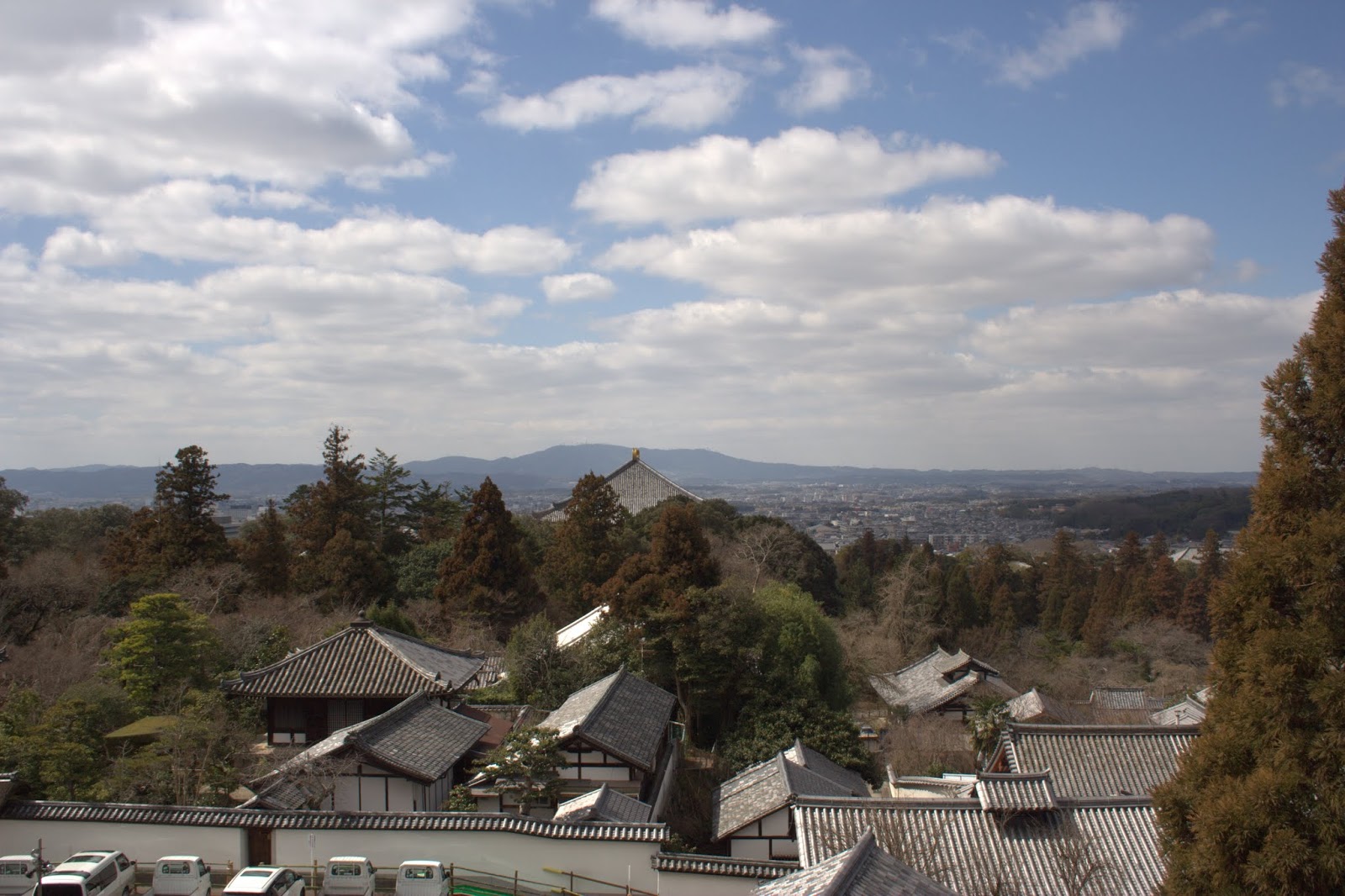 We climbed down from the heights and wandered over to Kasuga Taisha, another Shinto grand shrine, this one known for its collection of hundreds of bronze, stone, and gold-plated lanterns. We wandered among the lanterns for a while, admired the sacred trees (yorishiro), and then continued on our way; having entered from the back, we walked out the front, down the path lined impressively with stone lanterns (and with deer looking for cookies). At the end of the path, we encountered one of our favorite things in Japan: roasted sweet potatoes in a bag! Apparently these are called yaki imo. We bought a large one from a lady with a big stove-looking thing on a cart, while the stove gave off a loud, high-pitched whistling. It was quite cold in Nara that day, so we clutched our sweet potato halves for warmth (before eating them) and continued on our way. 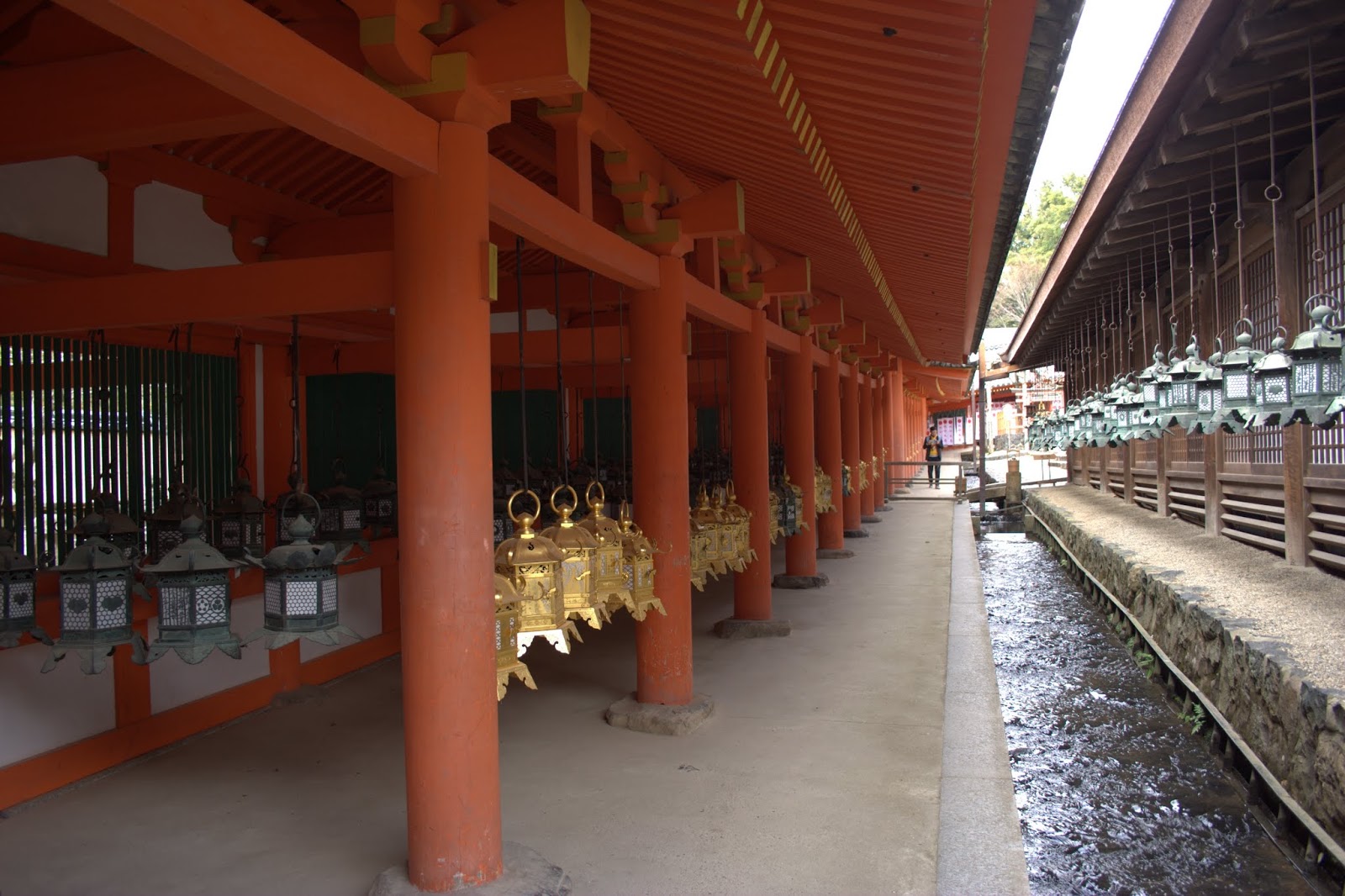 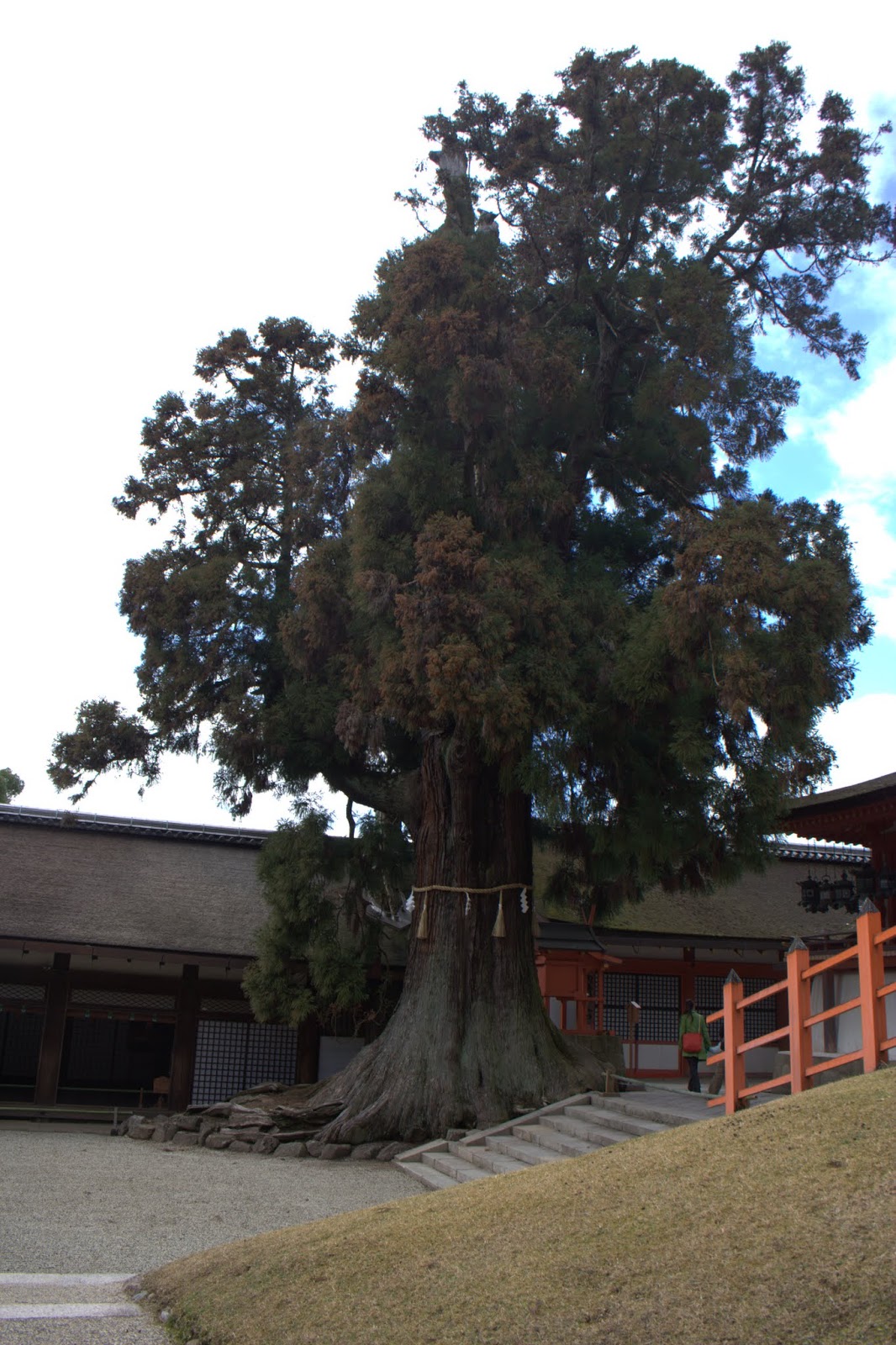 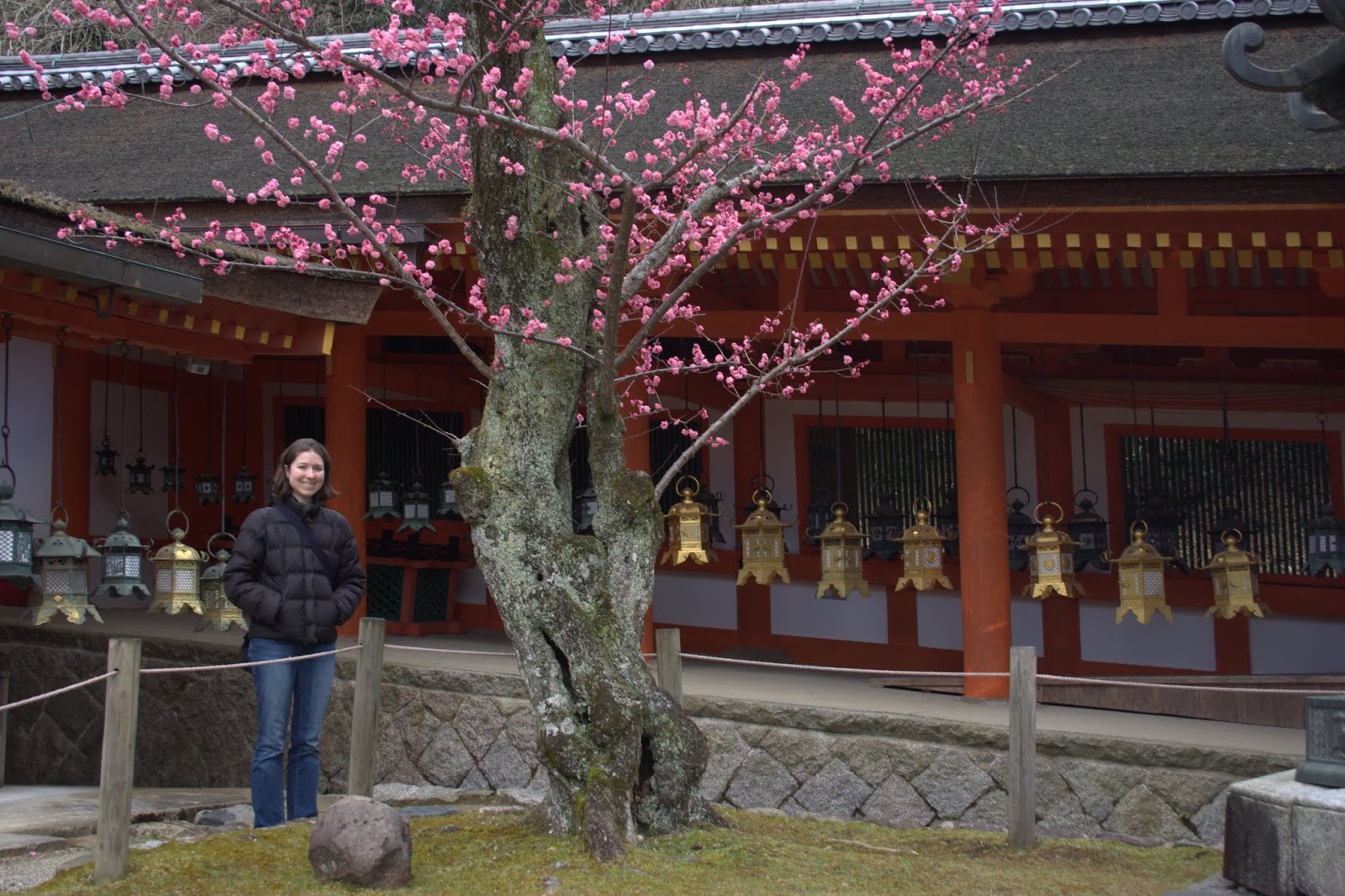 Our final stop was Kofuku-ji, a temple that is probably more impressive when not covered in giant tarpaulins. As it was, with the main hall covered up, and as cold as it was and as tired as we were by then, this was one of the less impressive sights. Nice pagoda, though. After our brief visit here we finished our walk back to the train station, stopping along the way with the hopes of getting lunch. Unfortunately, when we tried a chain curry restaurant, we discovered that they had only pork or beef curry, and had to leave since Justin doesn’t eat either of those. Our train was delayed (!) on the ride back but we returned to the hotel without any other problems. We even got some hot chocolate, in a can, from a vending machine on the station platform. Hot (canned) drinks from vending machines seem to be pretty popular, especially coffee. 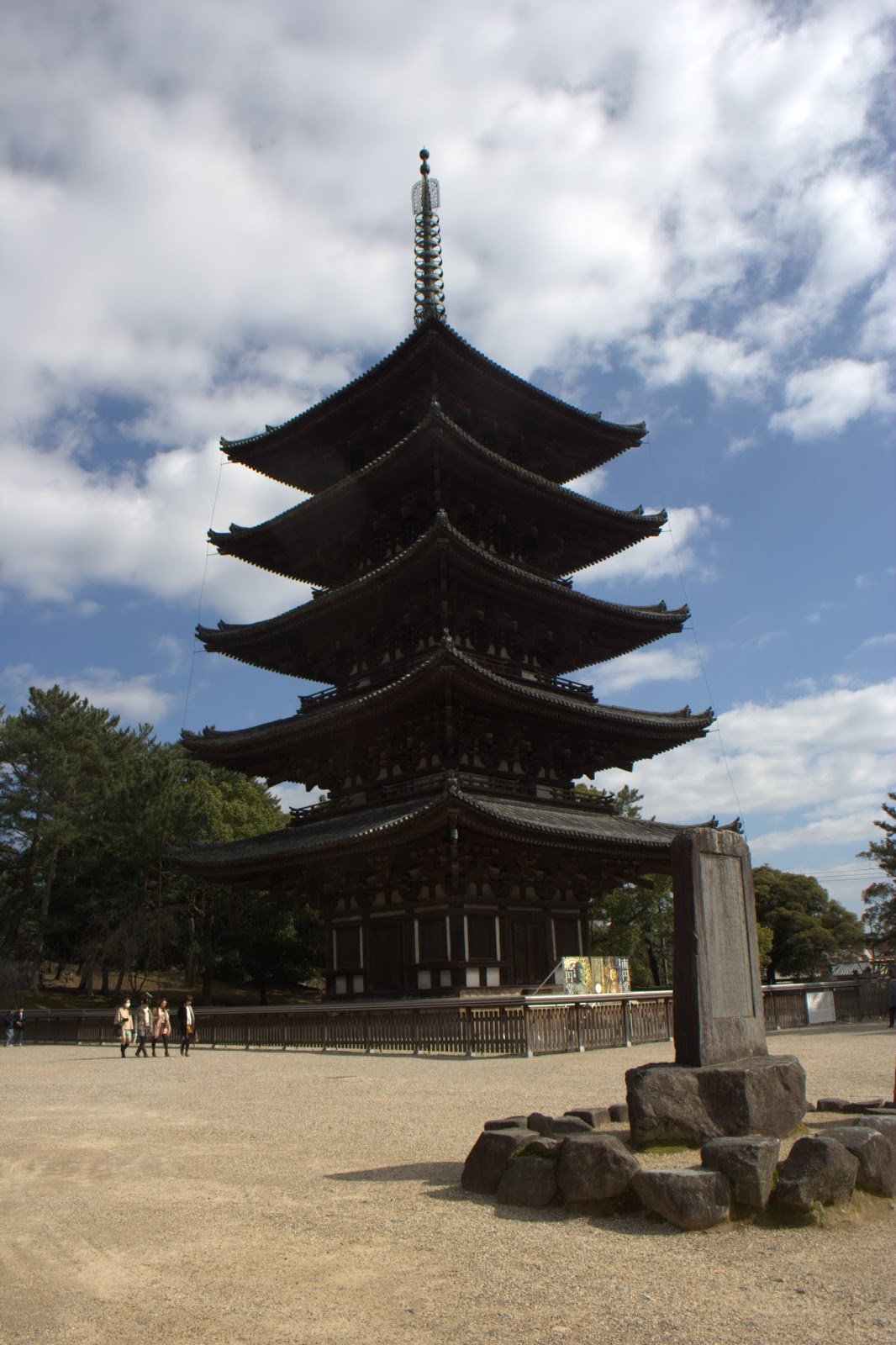 Back in Kyoto we had dinner at a conveyor belt sushi restaurant very close to the hotel with the others in our travel group. I’m not a big fan of raw fish, so the benefit of this type of restaurant for foreigners like me is the wide variety of foods available without having to order off a menu you can’t read - you just pick up whatever you want from the belt as it goes around. There was a limited but satisfactory number of cooked items on the menu so I was fine. It’s entertaining just for the experience alone, though, if you’ve never been to an establishment like this before.