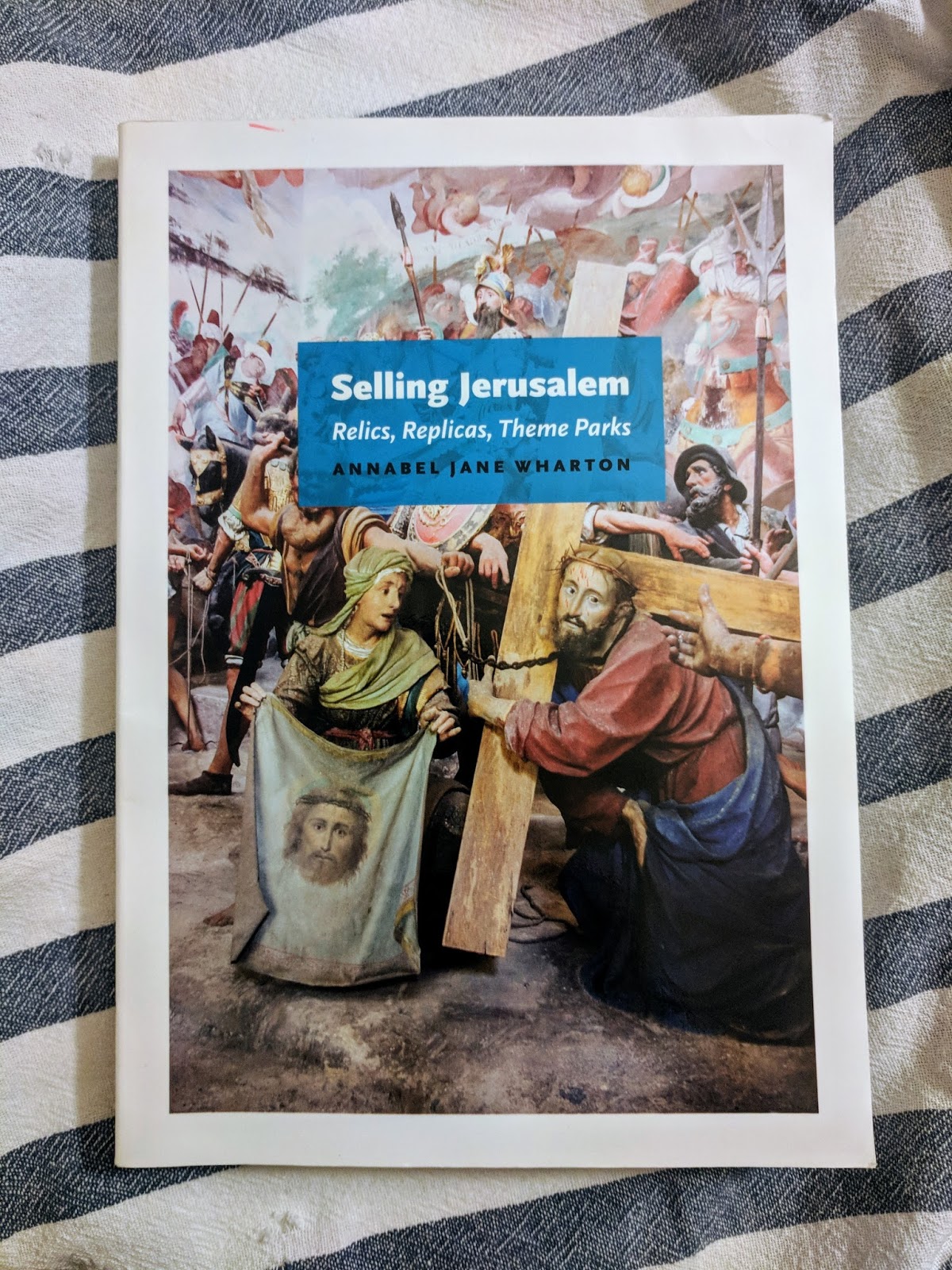 After reading Professor Wharton’s most recent book, Architectural Agents (my review is here), I knew I needed to read her previous volume, Selling Jerusalem. And I’m pleased that I finally did! The book covered a wide swath of topics I find interesting: Israel/Palestine, Early Christianity, architecture (of course), theme parks, and art history. Professor Wharton weaves a dual narrative of how Jerusalem has been “consumed” in the West by means of its images (in the form of relics, reproductions, panoramas, etc) at the same time that that consumption has changed together with changing economic systems (from gifting and barter, to monetary exchange, to late capitalism and globalization). The brief “Conclusion” chapter gives an excellent and succinct recapitulation of the book’s arguments: “This text argues that the forms by which Jerusalem has been appropriated in the West have shifted sequentially. They have progressively dematerialized even as they became ever more visually persuasive. […] The progressive dematerialization of Western expressions of Jerusalem curiously corresponds to the progressive dematerialization of expressions of exchange. I have argued that the ascendancy of each of the distinct invocations of Jerusalem – fragment, replica, fabrication, reproduction, spectacle – was conditioned by its peculiar embodiment of contemporary economic practice” (p. 234-235).

The one criticism I have is that this chapter is last. I found myself wondering in the early chapters of the book what the possible overarching argument of the whole book could be. Each chapter covers a diverse range of objects and issues, and rarely recapitulates itself, such that I had a hard time finding a narrative thread to hold the whole thing together. But each chapter is also so interesting in itself that I wasn’t too concerned about where it was going as a whole.

Chapter 1 discusses relics of Jerusalem, or “fragments” in the author’s terminology, which are pieces of the city itself, or of saints or others associated with the city. She describes the history of a reliquary of the True Cross, in its translation from owner to owner through gifting, until finally, in the modern era, it loses its value as a relic and becomes a commodity, an art historical artefact, through its sale as part of a large collection of objects.

Chapter 2 describes the Order of the Knights Templar and their replica churches of the Holy Sepulchre in other cities, including Paris and London. The Templars, a religious order founded in Jerusalem during the Crusades, are situated in their role as “protobankers” of the medieval period, who were entrusted with vast amounts of money and treasure, and guarded it on behalf of their owners. Thanks to their independent organization, independent of nation or parish and freed from taxes, they were able to accumulate great wealth of their own through alms and rents (p. 68). Wharton argues that this also made them vulnerable to takeover, and thus they were eradicated by Philip IV of France (through accusations of heresy) and their wealth confiscated.

Chapter 3 moves on chronologically to the Franciscans in Italy and their reproductions of Jerusalem on various sites within Italy. These reproductions were intended to be fully immersive and realistic, allowing the viewer to experience the same space as the life-size tableaux arranged for their viewing consumption. The Franciscans also played a role in Jerusalem itself as guides and caretakers of pilgrims. Their reproductions of the city were based on their knowledge of the sites and were an attempt to bring Jerusalem wholesale to pilgrims “back home.” At the same time, they re-made Jerusalem in the image of how they believed it should look - for example, inscribing the Stations of the Cross on the city, in a specific number and sequence (p. 139).

Chapter 4 analyzes the Holy Land prints of David Roberts, in the context of tourism - no longer just pilgrimage - to Jerusalem. His works were idealized versions of the city, “the real Holy Land” (emphasis in original, p. 160) to his viewers. These prints were available for sale and were intended to generate a profit, in contrast to the modes of consumption described in the previous chapters. The second part of the chapter looks at panoramas of the city, which were also commercial ventures and had a similar pictorial and idealized relationship to the city. In the panorama, the landscape of Jerusalem functioned both as a religious experience and a historical one, allowing religious viewers to gain a spiritual experience from a reconstructed, (quasi-) historical landscape.

Chapter 5 concludes the book by examining “spectacularized Jerusalem,” the Jerusalem of theme parks, specifically the Holy Land Experience in Orlando, Florida. Although its creator viewed it as a religious space, like a shrine, Wharton argues that its nature as a space of consumption and spectacle undermines this reading, and it cannot but be read as a theme park. She also discusses the “remodeling” of Jerusalem under British governor Ronald Storrs, in order to make the city look more like David Roberts' prints (p. 206). She ends by describing how money and religion intersect in enterprises like the Holy Land Experience, with its position both as a for-profit organization and (its claims to) tax-free religious status.

Some things I realized after reading this book:

– It’s getting to be embarrassing that I haven’t read Robert Caro’s The Power Broker yet, so that needs to become a top priority. How it is that practically every scholarly work I read cites it? Is this some kind of conspiracy to get me to read it? (p. 220)

– The photo of Duke basketball on p. 103 must be some kind of private joke, but I have no idea who it’s directed towards. I would love to know.

– If the practice of art history were entirely like a combination of Professor Wharton’s books and Geoff Manaugh’s blog posts, I would quit architecture and go immediately to get a PhD. But I am fairly certain that the cost of admission is actually doing some “hard” research, so oh well. Maybe some day.

*It occurs to me as I write this that Professor Wharton may be lurking on the internet somewhere, with the possibility of reading this. So, Professor Wharton, if you are out there - playing Assassin’s Creed or Second Life, or thinking about whatever comes next in our post-human environment - thank you for teaching me about architecture and theory. I would not be an architect if it weren’t for you.