Back in October, during my two week “experiment” of living in San Francisco, I visited the Museum of Craft and Design, a great little museum in the Dogpatch, to check out their exhibit “Architectural Pavilions: Experiments and Artifacts.” Much of the work seemed familiar, either because I had read about or seen it before (DO|SU Studio’s Bloom, IwamotoScott, SITU) or because it looked a lot like other work I’ve seen elsewhere, either in studio courses or around the web (Future Cities Lab, Jay Nelson, Warren Techentin). Unfortunately the exhibit is over now, so it’s no longer on view, but I encourage you to check out the museum regardless.

Pavilions are the playgrounds of architecture, where designers are liberated from the rules that make new materials and new shapes difficult to use (eg, waterproofing, permanence) and thus allow explorations that are sometimes otherwise impossible. For me, though, I don’t think it’s enough to try out crazy shapes; there has to be more, either an exploration of a new technology that could have further uses, or testing a shape that could have wider applications, or similar. Pavilions that are purely spectacular seem to be a wasted opportunity. The exhibit itself explored this idea of pavilions as architectural testing grounds (see wall text below). By that standard, though, some of the featured pavilions were more successful than others. Here are some photos of the pieces that I found most interesting.

At some point in the past, I had read about “Bloom,” the bimetallic sculpture by DO|SU Studio that was on display in Los Angeles; this exhibition had one piece of it to demonstrate how it works. The sculpture is made of two types of metal with different rates of thermal expansion laminated together, so as the outer side heats up in the sun, it causes the entire structure to move. The exhibit had a small piece in a display with a heat coil so you could see it move as it heated and cooled. While I’m not sure what the practical application of this effect might be other than shading - the LA display seemed primarily decorative, although the architect’s description indicated they hoped it might actually track the sun as an effective shading device - it’s definitely an interesting idea. I imagine that with computer modeling, one could make it into an effective shade, somehow. This is the sort of material exploration that seems perfectly suited to a pavilion. 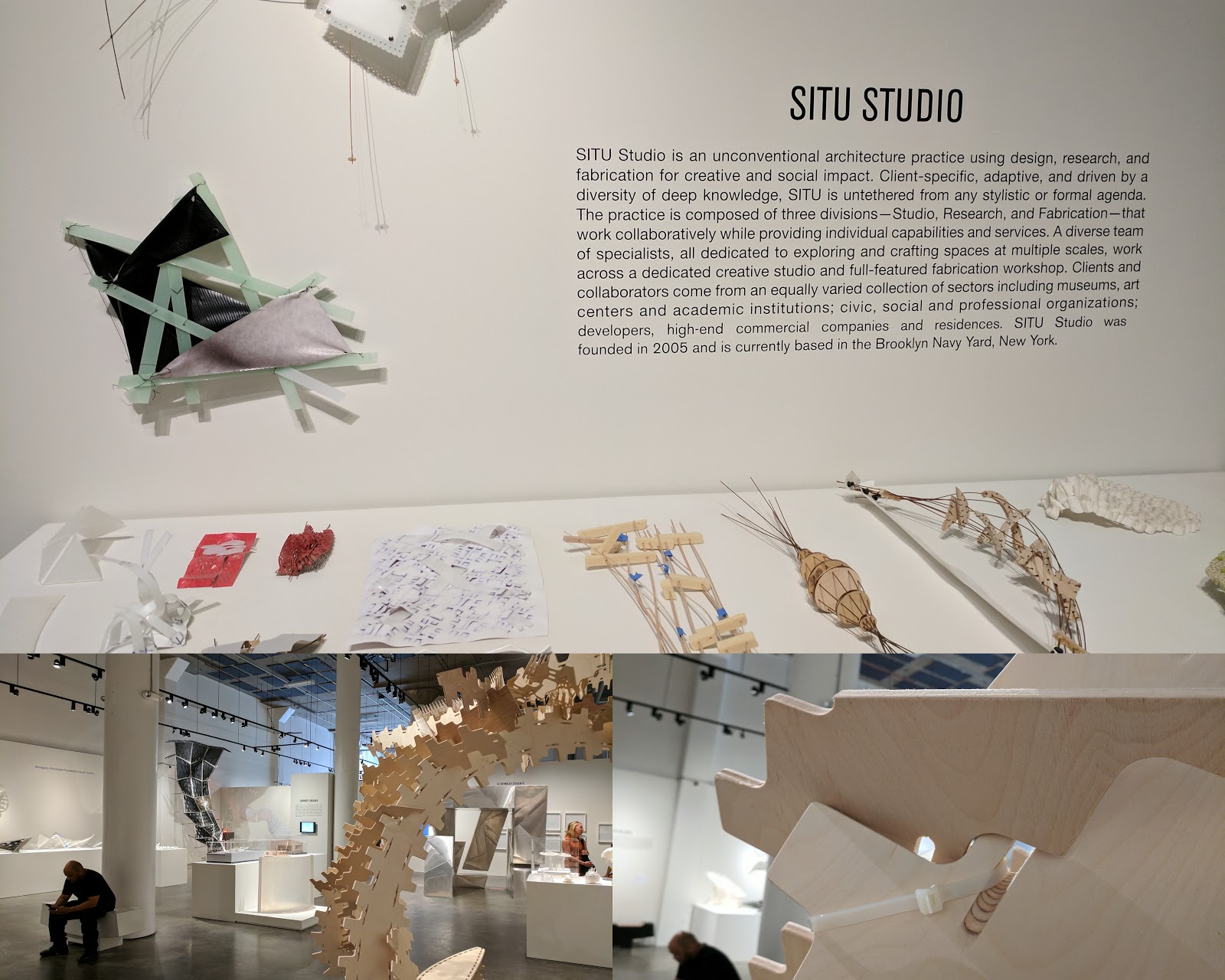 SITU Studio is based in New York and known for their fabrication focus. The exhibit had a piece of one of their pavilion shade structures, “Solar Pavilion 2,” this one made of milled plywood panels held together by the hardware of choice of architecture students: zip ties. Ah yes, many a studio project have I seen with the classic zip tie in the place of honor! I can’t say that I totally understand what the driving force is behind this design - their website claims that they wanted it to be flexible or reconfigurable, but what exactly was its configuration to begin with? It appears to be a big pile of stuff haphazardly lashed together with the ubiquitous “flexible tie-strap connection” (as their website calls zip ties). Who really needs to reconfigure a pile of stuff that doesn’t make any sort of shape, anyway? Why not just push it around? Maybe that’s the point - it’s like plywood legos, that can be made into any shape. But while it gives shade, that’s about it; it didn’t seem sturdy enough to sit on, or lean against, and the pieces didn’t seem to lend themselves to making amenity spaces. The bench part of it appeared to have a separate configuration: it was a regular bench with supports cut to look sort of like the rest of the structure. In any case, it was eye-catching, which seems to be all that most temporary pavilions are going for anyway. To me, though, this was one of the less successful installations.

This last set of photos come from two local, San Francisco-based practices: Future Cities Lab and IwamotoScott Architecture. I happen to know someone who works at IwamotoScott - congrats to Mia Zinni on the exhibition, whether you worked on it or not!

The top two photos from Future Cities Lab demonstrated their Thermaespheres and Anemone Canopy projects. The Anemone Canopy is a built public art project in Albany, CA; it reminded me immediately of The Living’s “Living Light” pavilion project in Seoul that indicates air quality information on a glowing tree-like canopy. That was apparently a project in conjunction with GSAPP; The Living - now owned by Autodesk - is (was?) David Benjamin’s studio, who is a GSAPP professor, and who was part of my second-year C-BIP joint studio. The Future Cities Lab project seems formally similar but conceptually far from the “Living Light” project, since the “Living Light” was meant to be interactive, showing information to the public (albeit in a very abstract way), while “Anemone Canopy” is a pure shade structure / art piece. I have to say I’m a bit disappointed that it didn’t attempt to do more. It does look cool, though, as does the Thermaespheres. The latter was apparently about creating different temperature environments, although it wasn’t clear to me from the model itself how that was supposed to work.

The IwamotoScott project is called, appropriately enough, “Site Specific Pavilion” and was built for the exhibition. The “pavilion” was a seemingly hovering assemblage of metal-clad shapes held together by steel wires. It looked more like a sculpture than a pavilion to me, and I thought you actually had to look pretty hard to tell that the shapes were floating above each other. I had to follow the shapes around the piece in order to understand that they did not rest on each other. This seemed to be truly a pavilion without a purpose, since it, unlike the others, could not even provide shade; but as a sculpture, I found it compelling. Again, I wish it strived for a bit more, or at least was inviting enough to sit on!

Lest you think I am hating too much on pavilions that look great but don’t do much else - I was indeed impressed enough with Studio Gang’s “Hive” pavilion at the National Building Museum (which I wrote about briefly last year) to take dozens of photos of it. And I have designed at least a few nonfunctional pavilions for competitions myself. So it’s not that I am immune to the lure of an exciting shape - but always left wanting more! Generally I had the same feeling about these projects. Perhaps that’s the curse of an architect who thinks too much about the purpose, cost, and social impact of her work.

For another take on the exhibit, here’s a more straightforward article.